When I was planning a trip to Kyoto, the wooden pillars of Kiyomizu-dera, the golden pavilion of Kinkaku-ji, and the endless vermilion torii of Fushimi Inari-taisha were among the things I thought of visiting the most as countless photos of them always seemed to appear in every Google search of the city. Blame my ignorance, I was unaware of an important castle in Kyoto until the day I explored the city when James pointed it out. Located right in the heart of the metropolis, Nijo-jo (Nijo Castle) looked nothing like other Japanese castles I went to a few days earlier. Unlike Himeji Castle, Osaka Castle or the black castle of Okayama with their archetypal multi-story architecture – making them key landmarks in their respective cities – Nijo-jo lacked the loftiness of what one would expect from a Japanese castle.

Constructed more like a sprawl of single-story structures than a towering prominence, Nijo-jo differs from its counterparts in how it can’t be seen from outside its defensive walls. Only after we entered the palace compound through the Great Eastern Gate, pass the ornately-embellished karamon (a type of Japanese gate symbolizing authority), did Ninomaru Palace – one of two palaces within the moat-surrounded enclosure – show its elegance and grandeur. Under the clear blue skies, the grey roof tiles of the palace and the intricate carvings decorating its weathered wooden gables emanated a bold yet mellow tone, a character shared by great monuments from the past all over the world. To truly understand what the castle had gone through in the past, one must learn about the history of the Tokugawa Shogunate as the compound acted as a silent witness to the rise and fall of the third period of military rule in Japan.

Since the late 12th century, amid the political decline of the Japanese imperial court, Japan was effectively ruled by the shoguns (military dictators) although the emperors remained nominal heads of state. The feudal military government of the Kamakura shogunate ruled the country until 1333 when a restoration by Emperor Go-Daigo brought the imperial house back to power, albeit briefly. Three years after the fall of the first shogunate, the Ashikaga (Muromachi) shogunate rose to prominence and ruled Japan for more than two centuries. During this period, some of Kyoto’s most iconic edifices were commissioned, including Kinkaku-ji and Ginkaku-ji. But the second shogunate’s reign was also marked by Japan’s descent into chaos and disunity, beginning from a little over a century after the Ashikagas gained control of the nation.

In this period of social upheaval and conflict, local lords (daimyo) fought against each other over territories across the Japanese archipelago, everyone trying to assert his influence upon the shogunate. However, during this time of uncertainty, Japan’s foreign trade – especially with China – managed to thrive. In addition to that, small-scale businesses also flourished, providing the people with more opportunities and competition. Toward the end of the 16th century, a daimyo called Tokugawa Ieyasu gradually consolidated his power by subjugating weaker local rulers and amassing support from those who decided to stand behind his back. In 1600, after winning a decisive battle against the Toyotomi – the most powerful clan in Japan at that time – Tokugawa Ieyasu technically started the Tokugawa shogunate period, although the emperor only formally appointed him shogun three years later.

With control of the country firmly in his hands, Tokugawa Ieyasu began a period of relative stability in Japan as he brought strict social structure back in place, ensuring that everyone understood his or her position in society. However, as relations with European powers soured and Christianity was officially banned in 1614, the shogunate’s policy became increasingly isolationist, although trade activities with foreign countries were maintained to a certain extent.

A Touch of Gold on Black Roofs 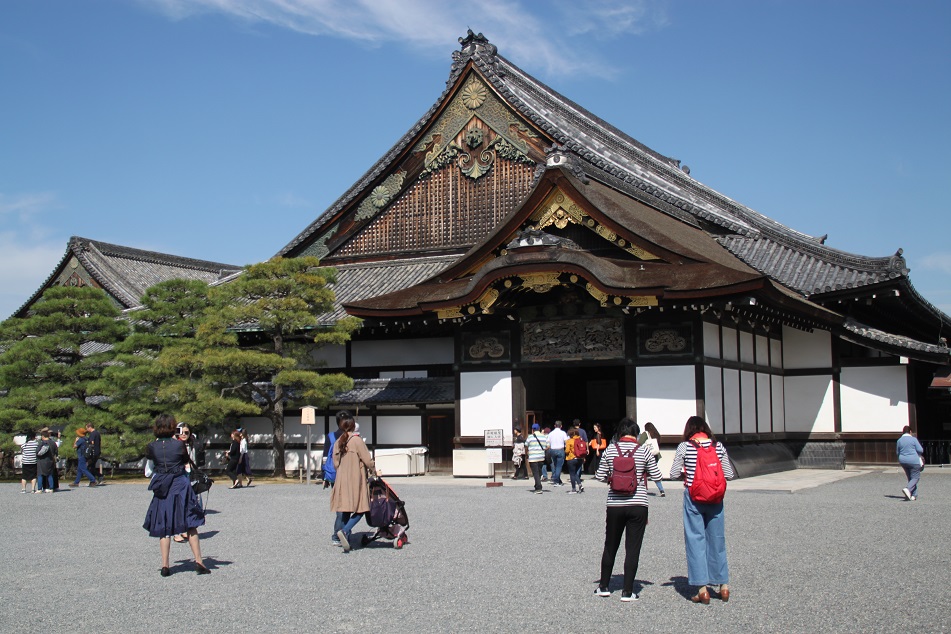 Ninomaru Palace, One of Two Main Structures of Nijo Castle

The Chrysanthemum, the Imperial Seal of Japan 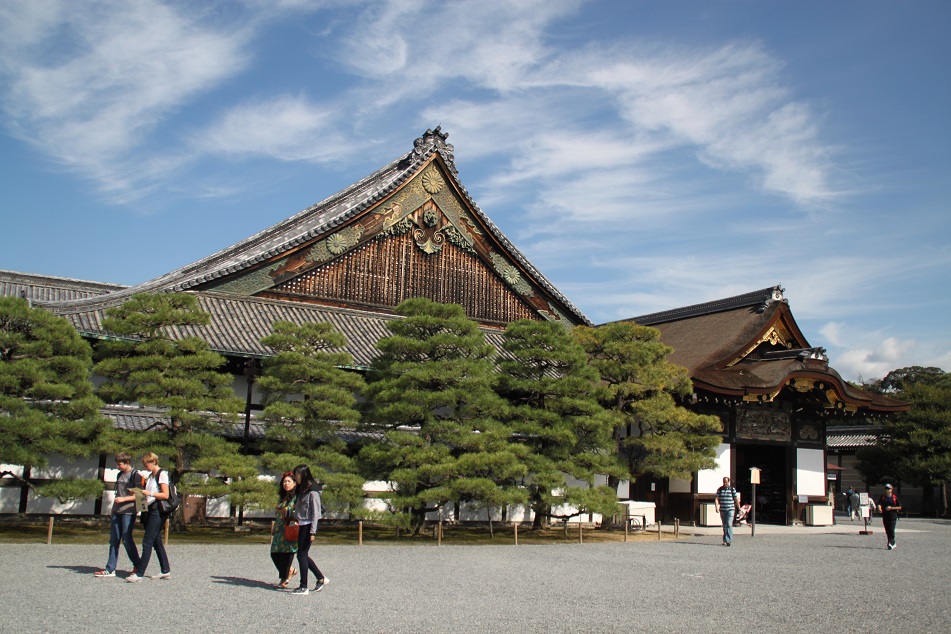 As the de facto new ruler of the country, Tokugawa Ieyasu commissioned Nijo-jo, a castle fitting for the third shogunate which, despite the seat of military rule being in Edo (present-day Tokyo), was constructed in Kyoto as it was still the imperial capital of Japan. Nijo-jo’s Ninomaru Palace was built as five contiguous structures connected by walls and shaded walkways. Unlike other Japanese castles where bodyguards occupied secret chambers within the structure, Ninomaru Palace’s layout allowed visitors to see the palace’s guardsmen, a form of deliberate intimidation to those who had even the slightest thought of harming the shogun. Another security feature in the palace lay beneath everyone’s feet, hidden from plain sight and only known by a select group of people. Underneath the wooden floor of the palace, upside down V-shaped joints were installed. Together they would make a chirping sound – hence the nickname “nightingale floors” – when walked upon, warning palace guards of potential intruders.

For Tokugawa Ieyasu it paid to be extra cautious as he held the highest power in the country. Nevertheless, Ninomaru Palace was more than just a highly secure structure. Some of Japan’s finest wall paintings and intricate wood carvings were added to its interior, intended to display the wealth of the shogunate. The Kuroshoin (the inner audience chamber) even had gold leaf encrusting its walls. Nijo-jo was continuously used as the Kyoto residence of the Tokugawa shoguns, although its significance was gradually diminished following a lightning strike and a citywide fire in the 18th century. The year 1867, however, was probably the second most important time in the castle’s history – after the year of its completion – as Ninomaru Palace became the stage for Tokugawa Yoshinobu’s declaration to forever end the shogunate and return the true power to the emperor. The hollyhock crest – the official emblem of the Tokugawa shogunate – which once adorned Nijo-jo was subsequently replaced by the chrysanthemum, Japan’s imperial seal which is still used to this day as the official emblem of modern Japan.

As we were about to walk inside Ninomaru Palace, I gazed upon the weathered imperial chrysanthemum perched near the top of the sloping roofs, an intriguing piece of history of the castle’s bygone era. Unfortunately photography was not allowed inside the palace, leaving only our eyes to record the elegant opulence we were witnessing. Then, when we further inspected the palace’s vast interiors, a chirping sound was heard incessantly as visitors delightfully stepped on the nightingale floors. Imagine if this happened back in the days when the shoguns still lived in the premises – that person would probably not have come out alive to tell others about this unique feature of the palace. At the back of Ninomaru Palace was Honmaru Palace, originally a twin of Ninomaru Palace which was then modified in the late 19th century.

What was initially a place unknown to my ignorant self turned out to be among the most fascinating historic buildings I’ve ever visited. With such a long and intriguing history, it is no surprise that Nijo-jo is included in the UNESCO-listed Historic Monuments of Ancient Kyoto, a collection of Japan’s most outstanding architectural treasures situated in the country’s former imperial capital.

To the Back of Ninomaru Palace, toward the Modified Honmaru Palace

The Southern Walls of Ninomaru Palace

At the Garden inside Nijo Castle Compound

The Inner Moat of the Castle

46 thoughts on “Nijo-jo: From the Hollyhock to the Chrysanthemum”