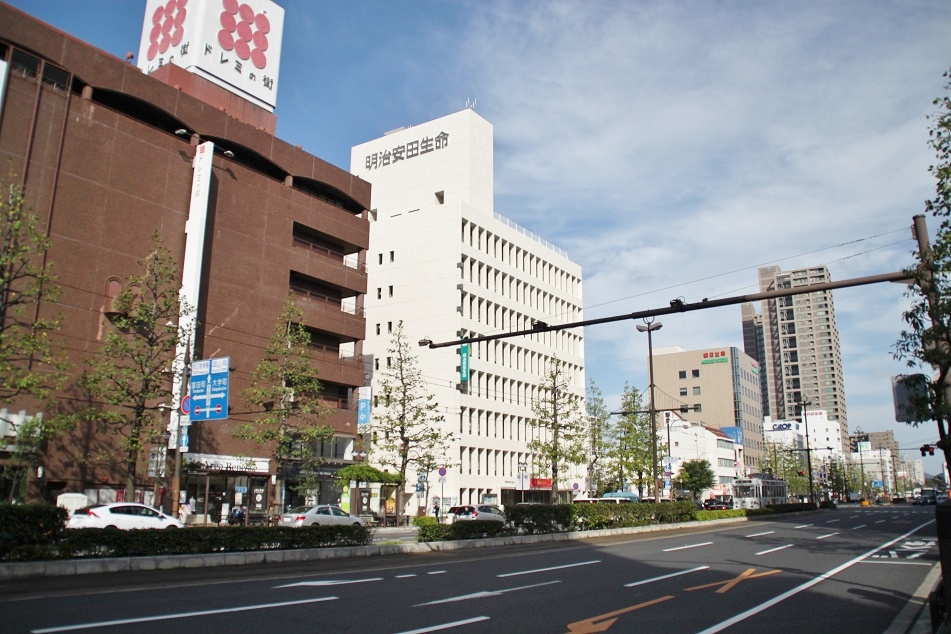 Moving on from something good can sometimes be very difficult. And that was exactly what happened to me after my first trip to Japan last year. It was not the country itself that had me utterly captivated, although many things I observed and experienced there left very deep and positive impressions. Rather, it was the grapes from Okayama in the Chugoku region that makes me now think that to travel great distances to taste something so good doesn’t sound so crazy anymore.

It all began with James‘s suggestion to include Okayama in the itinerary of our trip to Japan. It has a black castle, a beautiful garden, and it’s not too far from Osaka, the city where we flew in. He also mentioned about the grapes being very sweet. Sure, I had had sweet grapes before, but the castle and the garden were what I was looking forward to seeing the most in the city.

Conveniently located near Okayama’s main train station, our hotel presented me the first surprise of our stay. Breakfast was not only a feast for the eyes, but also for the taste buds. The tofu was so soft and smooth, the ebimeshi (shrimp fried rice) delicious, and the scrambled eggs perfectly done. However, it was a local Japanese curry that stole my attention. The addition of locally grown tomatoes to the dish gave it an unexpectedly fresh and sweet taste. I’d never thought tomatoes could taste that good.

On full stomachs, we left our hotel and hopped aboard a tram to reach Okayama Castle, also known as the “Crow Castle” thanks to its dark-painted exterior. Completed in the late 16th century, the main tower of the castle was destroyed by firebombing during World War II. Fortunately more than two decades later, a concrete replica was finished, faithful in appearance to the original wooden structure. Our visit to Okayama turned out to coincide with a long weekend in Japan, which meant there was a big crowd going in the same direction we did. It looked daunting at first, but as we merged into the hordes of people, I realized that there was no pushing, jostling, not even loud talking. I don’t usually enjoy being surrounded by too many people, but in Okayama it wasn’t something that bothered me much as everyone was so polite and considerate.

In Japan Cuteness is the Norm 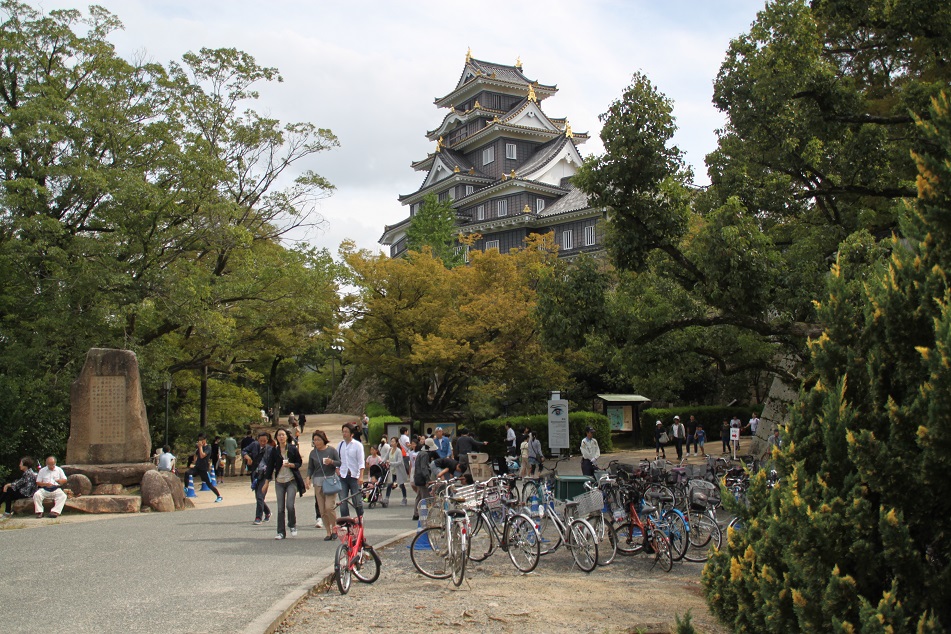 The Black Castle of Okayama

Nicknamed the Crow Castle for the Color of Its Facade

Tsukimi-yagura, A Corner Tower within the Castle Compound 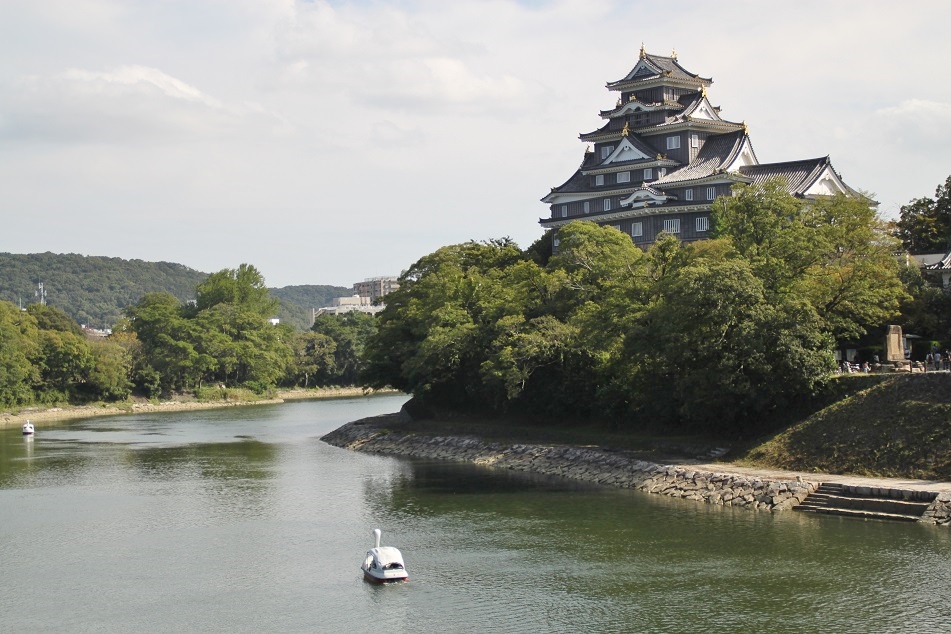 Across the Asahi River, a beautiful garden designed with quintessentially Japanese aesthetics was hidden behind trees along the riverbank. Korakuen, as the garden is called, was created in the late 17th century. Taking 14 years to finish, it survived the air raid during World War II and is now considered among the greatest traditional gardens in Japan. We walked down a pathway that led to vast manicured lawns and clear ponds, dotted with pavilions, teahouses and a small temple. The bucolic scene was unmistakably peaceful and calming – an ideal place to either rest the mind or get inspiration.

At a small restaurant outside the southern gateway to Korakuen, we settled on a late lunch. James decided to have tenobe udon served with onsen egg – egg cooked at a temperature low enough to keep the yolk runny. Meanwhile, my curiosity toward fruits from Okayama made me opt for a dish that consisted of organic rice and chicken in a peach and grape curry. Its savory and sweet taste further piqued my interest in sampling the grapes James had raved about even before the trip.

Back at the train station, we saw three types of grapes on display at the supermarket. All packed in small boxes, we decided to buy the one with the green Muscat of Alexandria and Aurora Black grapes in it. These grapes didn’t come cheap – with the same amount of money you can get four or five lunch meals in Japan. They’d better be good! In the hotel room, I washed my first batches of the green grapes, each of them so firm and plump, then … sweet, refreshing flavors burst in my mouth as I slowly chewed on them. They were so sweet they actually tasted very much like Japanese grape candies, but with no added sugar at all. Never had I tried grapes so juicy, fragrant, sweet and addictive like these Muscats. On the other hand, the black grapes yielded a deep, rich flavor which reminded me of red wine, minus the alcohol and tannic aftertaste. This grape tasting really was a revelation for me.

Okayama’s Korakuen, One of the Most Beautiful Gardens in Japan 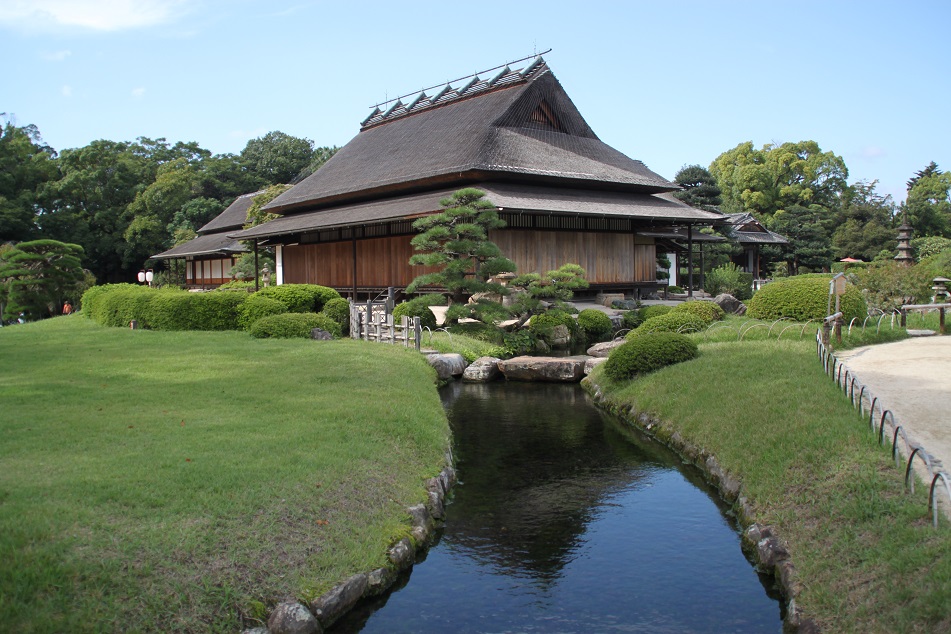 An Example of A Japanese Traditional House 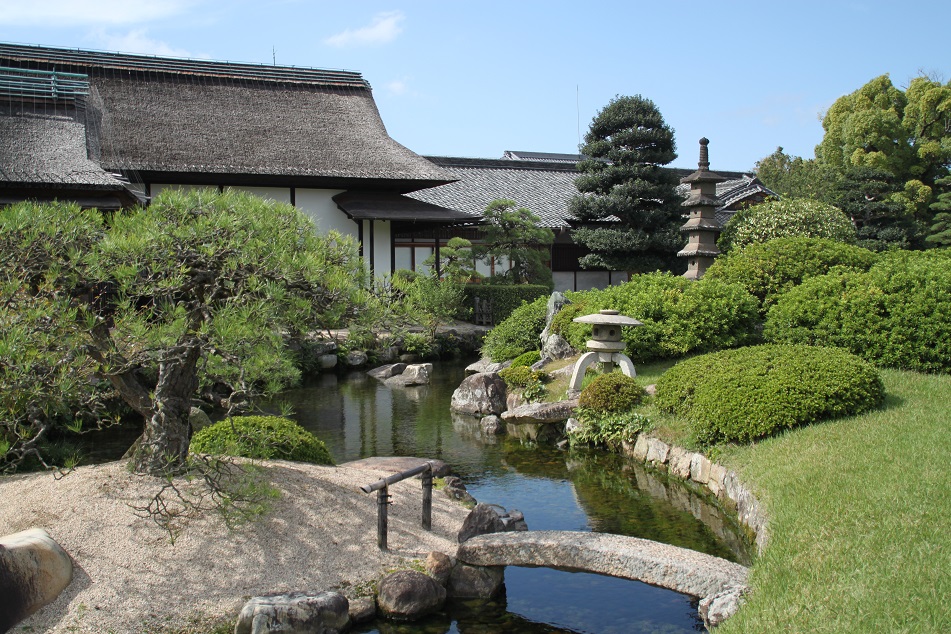 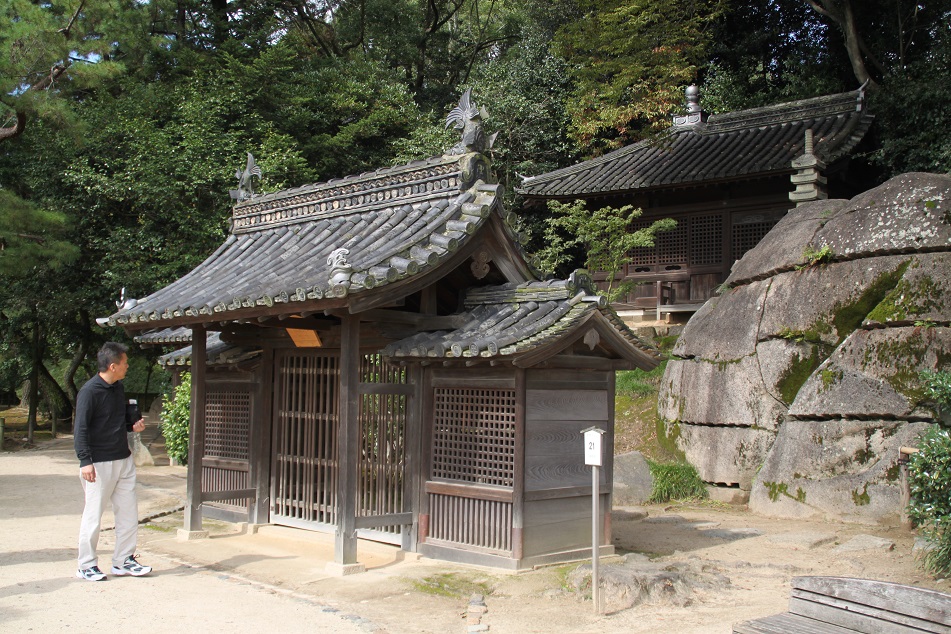 A Small Shrine in the Garden 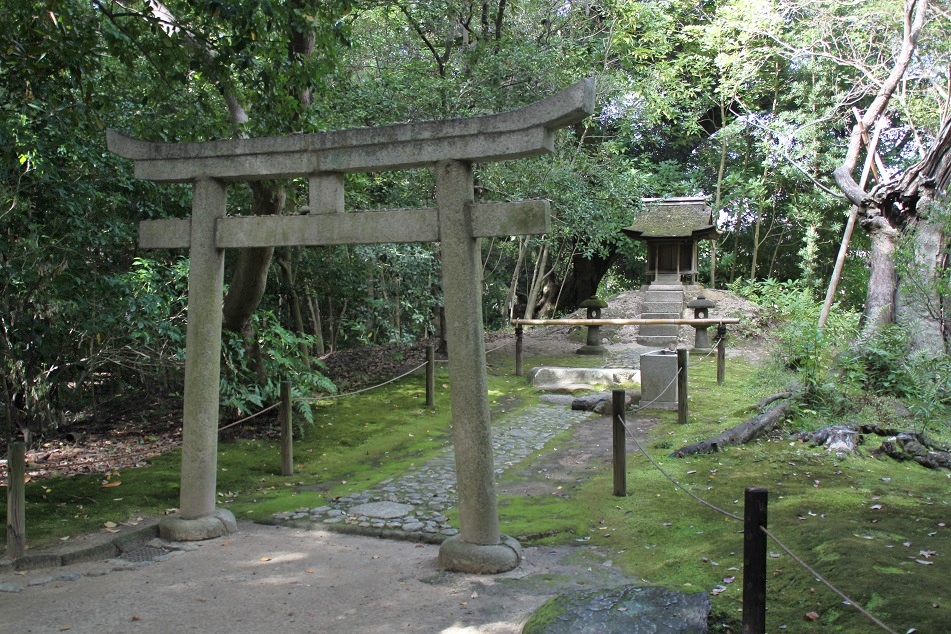 Another Shrine Hidden amid the Trees 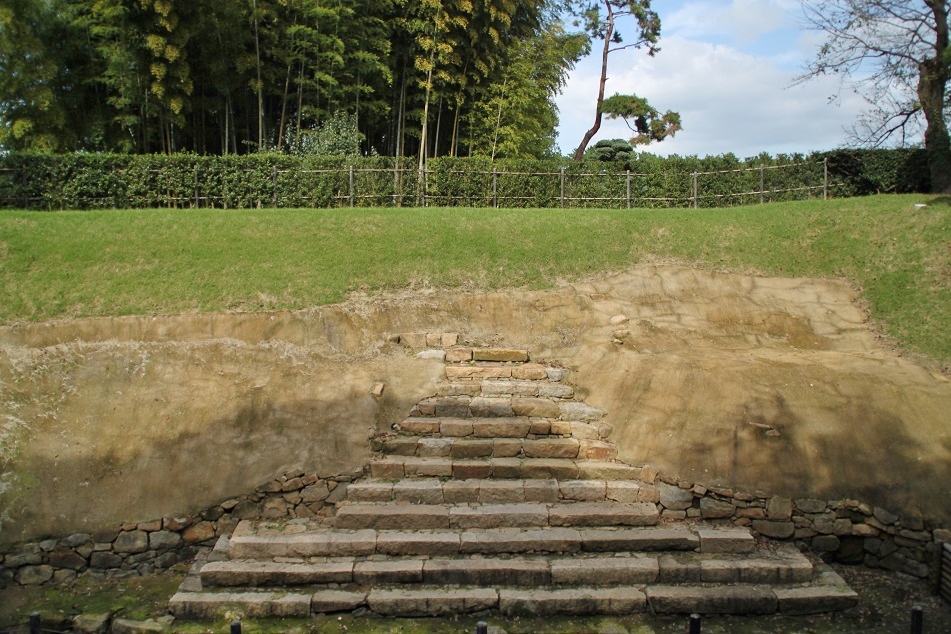 A Remnant from the Past 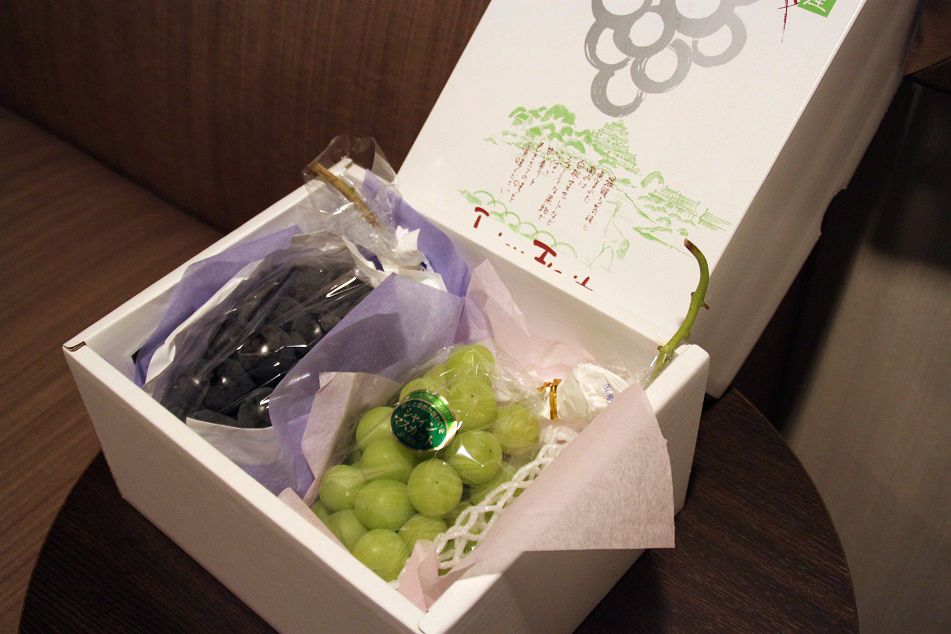 The Sweetest and Juiciest Grapes in My Life

For dinner we headed to a sushi bar, also at the train station, to sample some of the local delicacies. Fish, usually caught from the nearby Inland Sea, were present in all the dishes we tried. First we had mamakari-zushi, pickled sardinella sushi with a thin layer of translucent kombu (edible kelp) on the fish. Then came bara-zushi, an eye-catching platter of assorted sashimi, cooked seafood, and lotus root beautifully laid on top of rice and shredded egg. This dish dates back to the Edo era, some 400 years ago. At that time the local feudal lord, Ikeda Mitsumasa, banned his people from living a luxurious life, including eating expensive dishes. To deceive the authorities, some people came up with the idea of putting many toppings on the bottom of a bowl, then covering them with rice. When nobody was watching, they turned the bowl upside down and voilà! Bara-zushi was served. Comical history aside, our favorite dish that night was in fact sawara-don, a rice bowl topped with slices of raw Spanish mackerel, alfalfa, pine nuts, spring onion, and pickled ginger. If only I could have had a second serving!

The next morning we were slightly disappointed with the absence of the tomato rice at the hotel’s restaurant. But later that day we decided to buy another type of local grape to make up for it. Momotaro grape – named after the popular boy hero character who descended to earth inside a giant peach – was another specialty of Okayama with a shape that reminded me of a bell pepper, only smaller, smoother, and with less edges. Sure, it was juicy and sweet, but if I had to choose among the three varieties of grapes, I would go for the Muscat of Alexandria for its irresistible sweetness.

Peach, as the Momotaro story suggests, is another fruit Okayama is famous for. Unfortunately it was not in season when we were there. However, this short stay convinced me that going all the way to Japan only to try its high quality fruits is not as irrational as it might have sounded. Next time maybe white strawberries and muskmelons along with peaches? 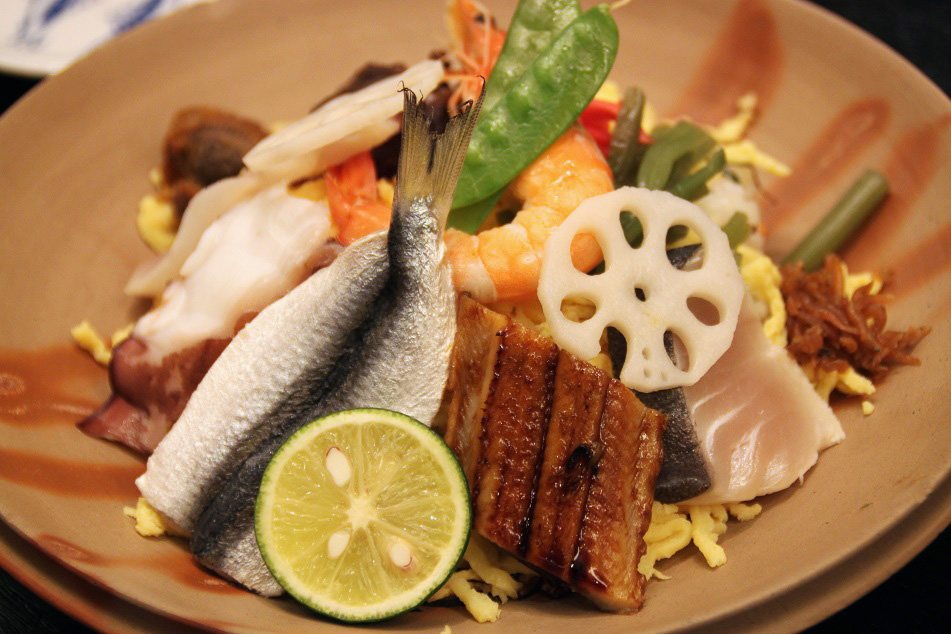 Bara-zushi, A Local Delicacy Dating Back to 400 Years Ago 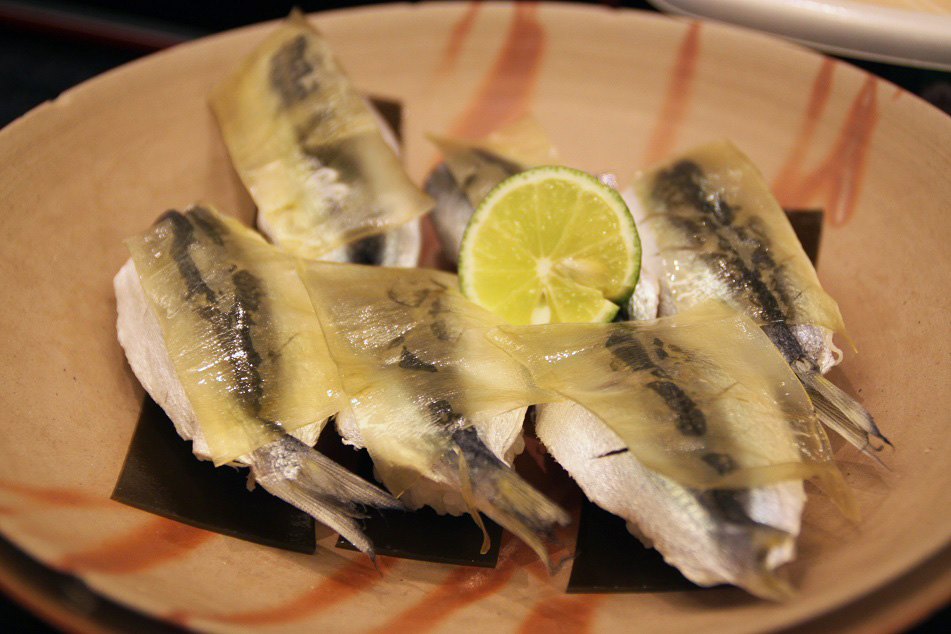 Mamakari-zushi, A Type of Sushi from Okayama 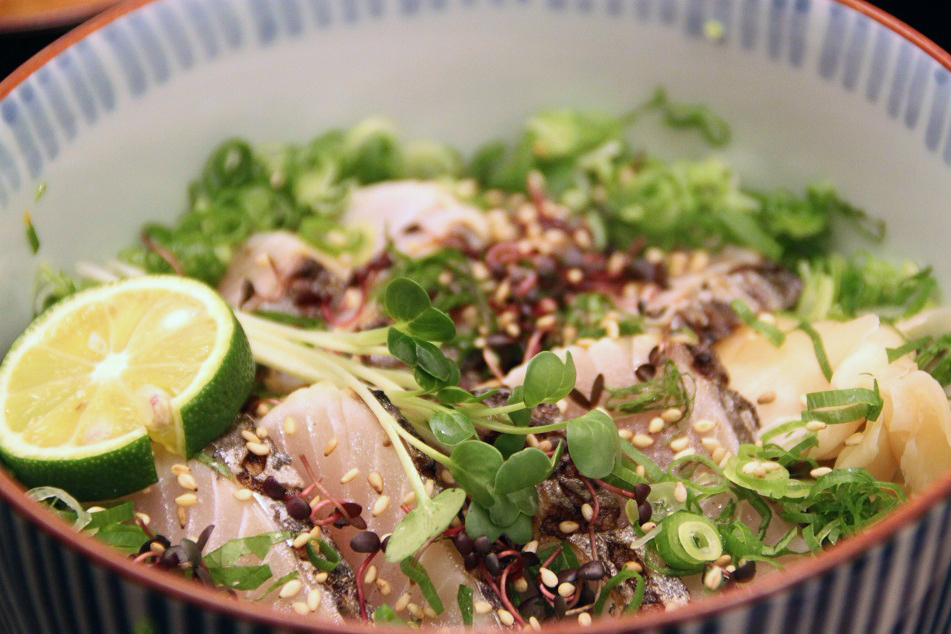 A Bowl of Sawara-don, My Favorite Dish in Okayama 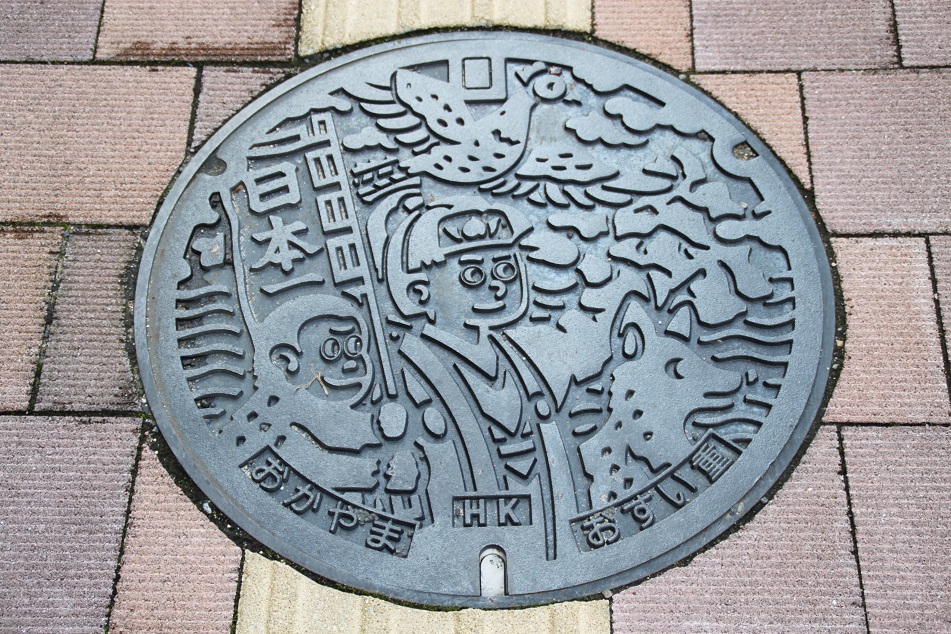 A Manhole Cover in Okayama, Depicting Momotaro (A Character in Japanese Folklore)