One morning, more than twenty years ago when I was still living in a small city in the westernmost end of Java, I was having instant noodles while watching a Japanese anime on TV. My father who had been noticing this new habit I was picking up suddenly asked me a question.

“Why are you eating with chopsticks?” He wondered, because usually I always used fork.

“I want to study in Japan!” my young self confidently replied. At that time I believed the first step to making that dream come true was learning how the Japanese ate.

Many years before this conversation happened, my father – at that time still working in the island of Borneo – and a few of his coworkers got an opportunity to take a short course in Japan due to their satisfying performance at work. But there was one condition: English proficiency was required. My father spoke almost zero English, knowing only how to say yes and no. Having given up the rare opportunity, he then wanted a “revenge”, not through him, but me, by enrolling me in an English course – which was very limited in the small city in western Java where I spent my primary school years.

At the age of 12, my parents and I moved to a bigger city more than 300 km away to the east. My father naturally looked for English course options available in the city and enrolled me in one that was easily accessible from home. You might ask, isn’t English taught at school? People of my age typically had their first English class in junior secondary school. But as the quality of teaching was rather unreliable, my father believed I should take an additional four-hour weekly course off school.

Like most Indonesian kids at that time, I grew up watching anime and reading manga. Both have been serving well as Japan’s agents of soft diplomacy which help improve the country’s profile and popularity among Indonesians. A classmate in high school sent a letter to the Japanese embassy in Jakarta, and in return she got a colorful booklet filled with images of fascinating Japanese cultural scenes. Through that booklet I learned for the first time about the three components in Japanese writing system, as well as other tidbits about the country. In the same year, I was introduced to Detective Conan, and became somewhat a fan of the thriller manga series. The first book I had sported Conan with Tsutenkaku (translated as Osaka Tower in the Indonesian version) on its cover.

One of the Arcade-Lined Streets in Shinsekai 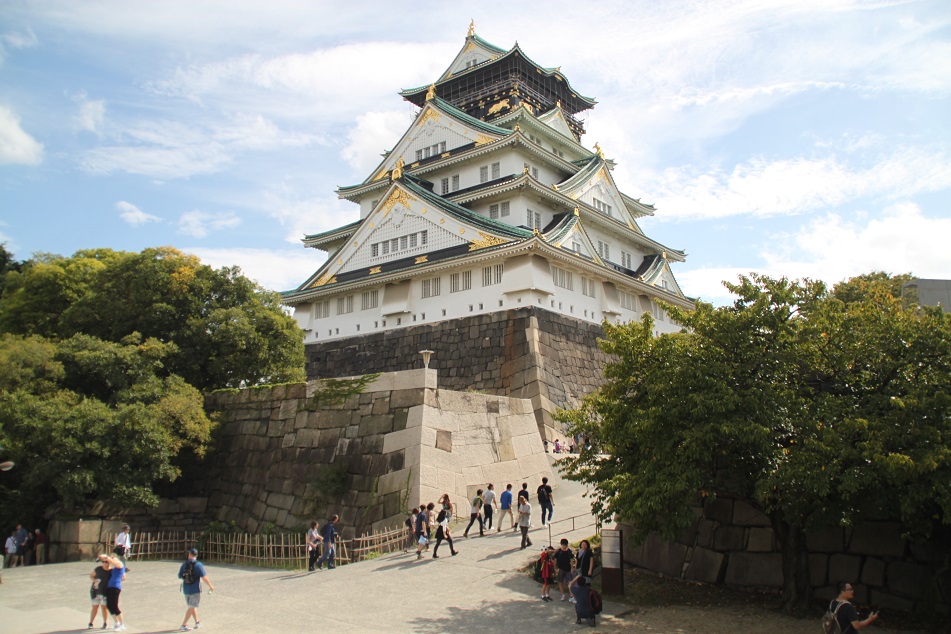 Osaka Castle, One of the City’s Most Iconic Landmarks 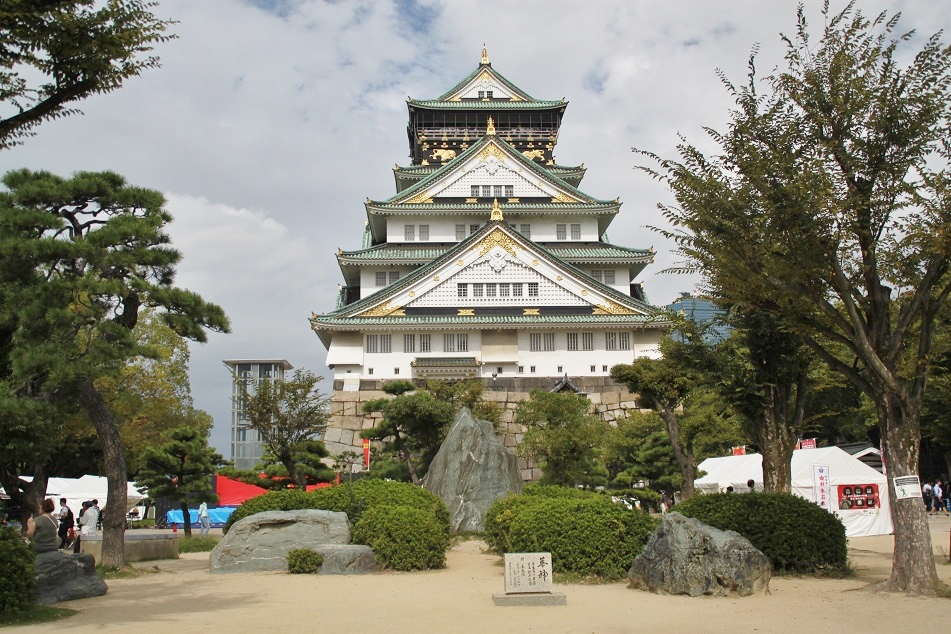 The Castle’s Main Keep, Reconstructed in 1931 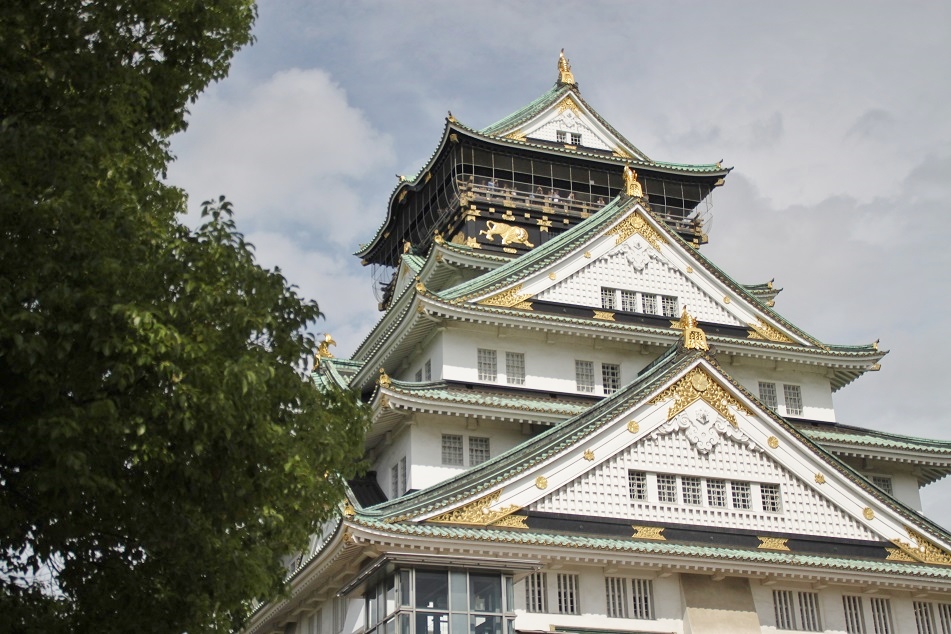 People say that childhood is a time filled with dreams and inspirations, and adulthood is when we bring them into reality. Sixteen years after I bought my first Detective Conan comic book, I find myself in a taxi with James on a Friday afternoon. We are stuck in the middle of Jakarta’s notorious traffic to get to the airport and leave for Osaka before midnight. Fortunately the flight departs on time, the Japanese inflight meal is very decent and tasty, and we manage to get enough sleep to prepare ourselves for Osaka the next morning.

As the plane makes its final approach to Kansai International Airport in the middle of Osaka Bay, endless sprawl of urban agglomeration stretches as far as the eyes can see. With a population of almost 20 million people, Osaka’s metropolitan area is in fact Japan’s second largest after Tokyo. And being one of the country’s main gateways, in 1994 a new, bigger airport was inaugurated after seven years of construction. Built on an artificial island which sits on top of clay in an area highly prone to earthquakes and typhoons, the new airport was considered an engineering marvel at that time.

Our train takes us to Shin-Imamiya station, where we get off and find ourselves in the middle of blocks of nondescript multistory concrete buildings. James told me earlier that he had booked a hotel near Tsutenkaku, the tower I’ve been associating Osaka with, so I keep looking for it as we walk down the streets to find where our hotel is. “There it is! I see it!” my excitement is probably comparable to spotting the Eiffel Tower or Big Ben – that exhilaration one feels upon seeing a famous landmark for the first time.

At the hotel, a mid-aged woman and a younger staff member welcome us in a very Japanese way, polite yet efficient. “I was in Bali once!” one of them enthuses after finding out that I’m from Indonesia. The hotel itself is located on one of the arcade-lined streets radiating out from the tower, probably among the most lively areas in the city. At a nearby convenience store, I witness firsthand how Japanese work ethic is practiced by the locals as part of their culture. A woman, who’s probably twice as old as I am, tends the cashier. At the same time, she enthusiastically greets shoppers and makes announcements through a microphone placed a few steps away behind her. She does all that in a speed three to four times as fast a shop assistant a third her age in Jakarta would. Truly impressive!

Our limited time in Osaka means we have to carefully plan out what we want to visit in the city, and as history and architecture buffs Osaka Castle is obviously among the places on top of our list. Japan’s railway system might seem a little daunting for a first-timer, but thanks to James who can read kanji – one of the three components in Japanese writing system – my train experience in the country goes rather smoothly. Train arrival is signified by jolly melodies playing in the station, and a delay – even if it’s just a few minutes – is usually notified in an apologetic announcement.

The skies are cloudy and the air humid as we step out of the nearest train station to the castle. But fortunately as we walk inside the ramparts, past some shops to our right, the sun begins to shine and the clouds slowly clear up. The castle’s architecture dates back to the late 16th century, a period when Japan was ruled by shoguns (military dictators) even though officially the emperors held the highest authority. In 1931, the main keep was restored following years of damage and neglect.

Its facades are embellished with gold-plated ornaments which shine in the midday sun. Toyotomi Hideyoshi, the feudal lord who commenced the construction of the castle, was indeed fascinated with gold. He ordered that furniture, weapons, armors, even the exterior of his castle to be coated with gold to show off his wealth and impress visitors. More than four centuries later, the castle is still as magnificent as it must have been during its heyday.

As the sun shines even brightly, and the day gets hotter, we take a respite at a matcha-themed shop. With a matcha (Japanese green tea) soft ice cream and melt-in-your-mouth matcha mochi in our hands, we conclude our short visit to the castle.

Osaka Skyline Viewed from the Ramparts 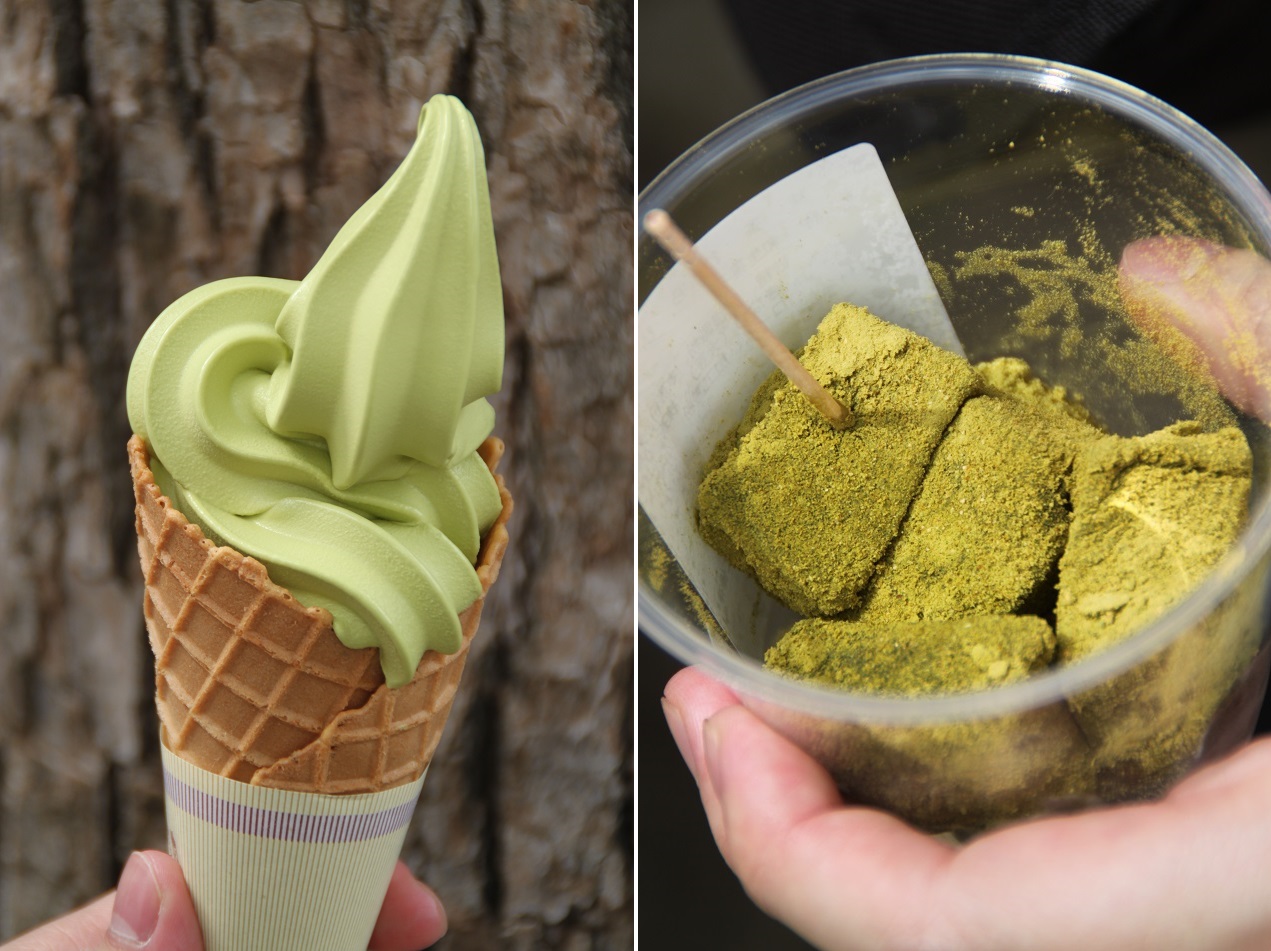 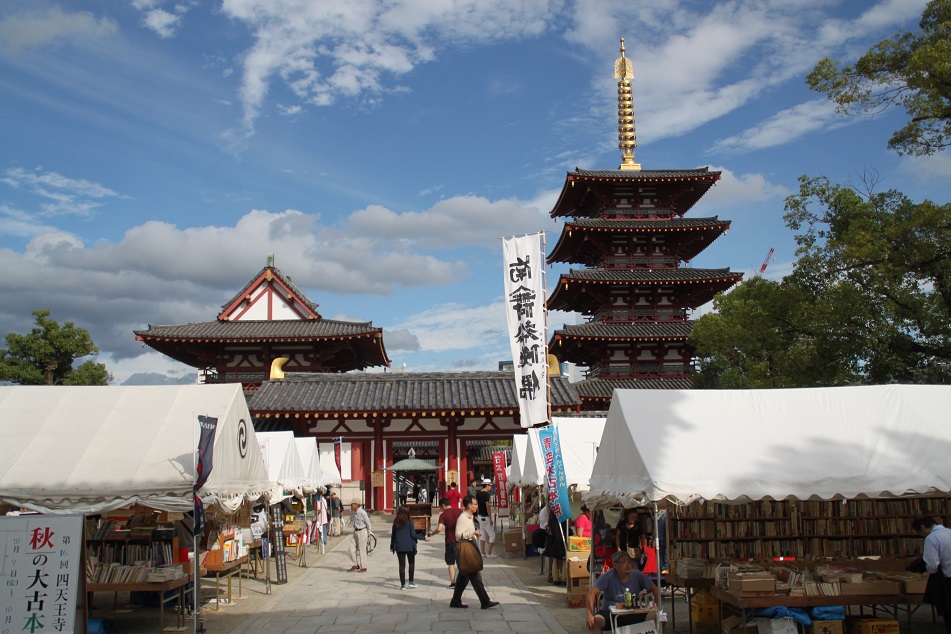 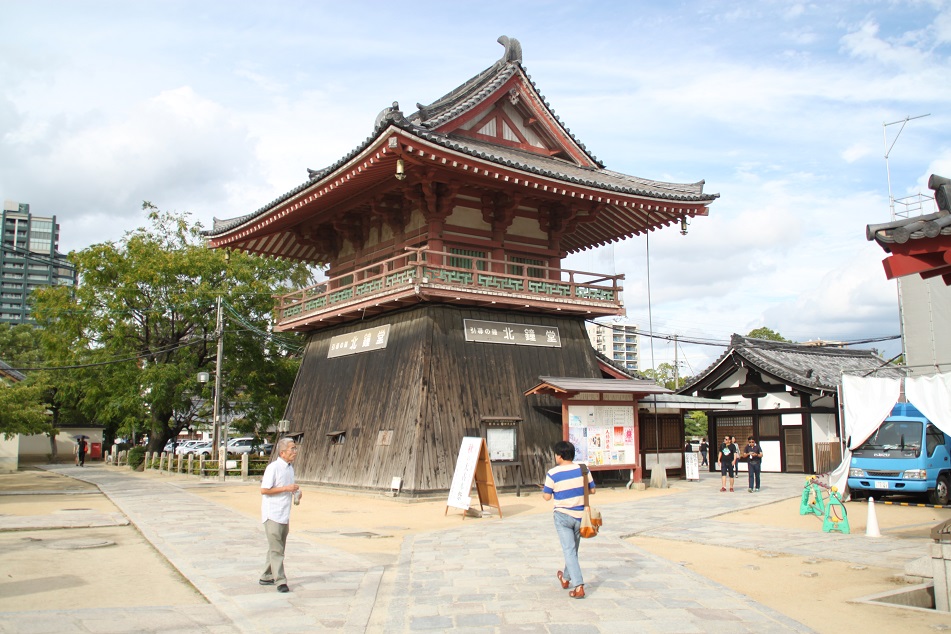 A Family Day Out

Six kilometers south of the castle is another important heritage site in Osaka which not only is important to the city, but also to Japan. Shitenno-ji is regarded as the country’s oldest Buddhist temple, which has been in operation since the late 6th century. It has been rebuilt over the centuries with much of the current structures a result of a restoration in 1963. Its five-story pagoda is a prominent landmark in the area, surrounded by several gates and belfries.

Back in Shinsekai district of Osaka where Tsutenkaku is located, big octopus-filled balls of takoyaki catch our attention. Made from dashi-flavored batter which is then grilled and served with sweet sauce, bonito flakes and lots of spring onion, it is hands down the best takoyaki I’ve ever had. When night falls, the entire neighborhood turns into a spectacle itself with neon-lit giant signboards and colorful lanterns giving the streets a very festive ambiance. Under the watchful eyes of giant puffer fish and a red octopus, we wander around and decide to try one of several places that serve okonomiyaki, one of Osaka’s delicacies. Unlike in the videos I had watched prior to the trip where a chef prepares the dish in front of customers, then serve it to them, we learn that making okonomiyaki is in fact largely a do-it-yourself activity. A staff member notices our confusion and shows us how to cook the dish. Despite his lack of experience preparing okonomiyaki himself, the thick savory pancake filled with meat or seafood, carrot and shredded cabbage, drizzled with thick dark sauce and mayonnaise that James makes turns out to be really delicious.

In Detective Conan, Shinichi Kudo – the protagonist who’s from Tokyo – often mocks his fellow detective from Osaka, Heiji Hattori, for his Kansai accent which sounds rough and rude to the people from the capital. This stereotype stems from 18th-century Edo (present-day Tokyo) literature, corroborated by its residents, which depicted Osakans as stingy, greedy, lewd and gluttonous people who spoke in a vulgar way. If gluttony is something Tokyoites still associate with Osakans today, I surely have fallen into it, thanks to those delectable and succulent takoyaki and okonomiyaki.

The Creamiest and Most Delicious Takoyaki I’ve Ever Tried

The Colors of Shinsekai at Night

Meeting Up with Friends under the Watchful Eyes of Sumo Wrestlers 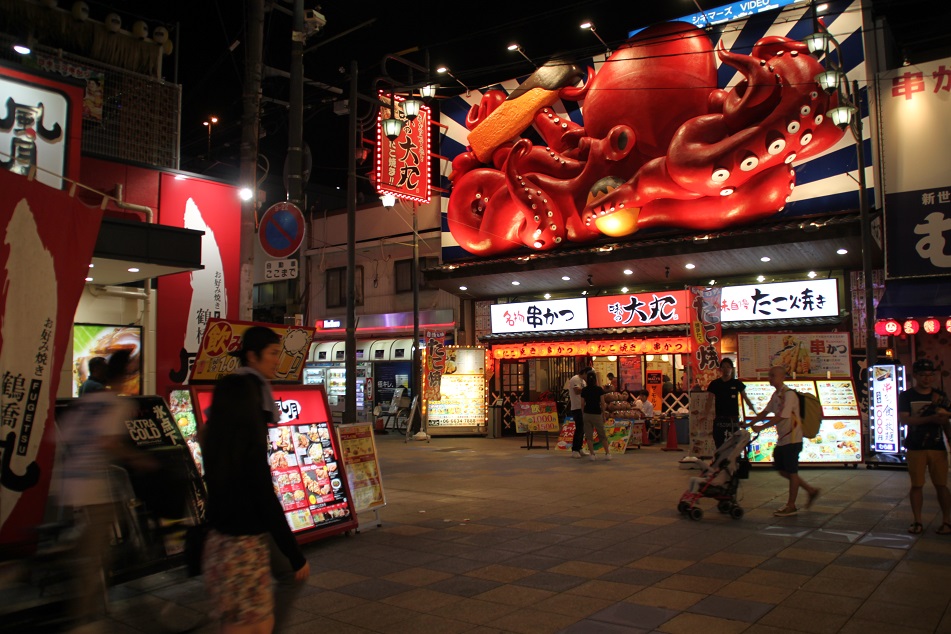 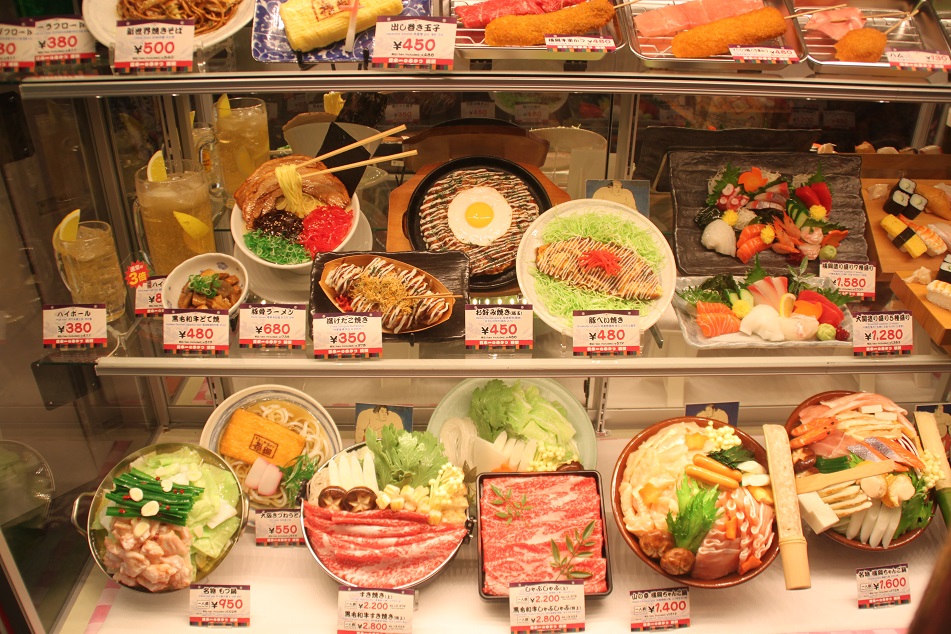 Plastic Models of Food, So Realistic They Seem Convincingly Edible 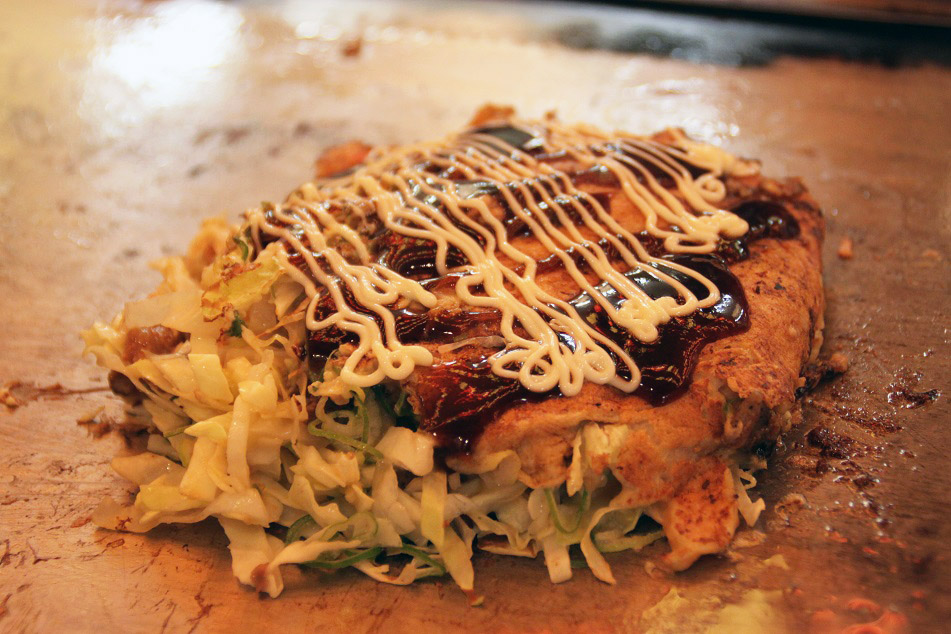