Several years ago, the headlines of Indonesian media suddenly flared up with nationalistic fervor against Malaysia following their claims (both official and not) over some cultural items that Indonesians are so dearly and emotionally attached to. Like sibling rivalry, netizens in both countries often fight over many things, from a traditional weapon to folk songs, fabrics and food. Rendang, a dish originating from the lands of the Minangkabau people – where many dishes were influenced by the Indians – was among those regularly contested between the two countries. So was lumpia (lunpia), Indonesian spring rolls associated with Semarang, a city in Central Java with a sizable Chinese community.

However, such trivial dispute is not exclusive to the two neighboring countries in Southeast Asia. In 2008, Lebanon and Israel both claimed hummus as their national dish, ignoring the fact that it has been around in the Levant since the 12th century, long before both countries were established in the 20th century. Down under, Australia and New Zealand have been debating for decades over who actually invented pavlova, a meringue-based dessert topped with fruits. Named after Anna Pavlova, a Russian ballerina who toured both countries in the 1920s, it is now more often associated with New Zealand, although it’s also widely consumed across the Tasman Sea.

Associating a dish with national identity often overlooks its history which usually involves countless cultural exchanges in the past when foreign merchants, traders, pilgrims and explorers traveled the world, brought along ingredients from home, and introduced their cooking technique to foreign peoples. Thanks to the Chinese, we now have a wide variety of noodle-based dishes to choose from. And because of the Indians who introduced rich, aromatic curries, our taste buds have forever been changed.

Without tomato – a crop brought from the Americas to Europe as part of the Columbian exchange following the rediscovery of the New World in the 15th century – what would spaghetti bolognese be? Had potato not been introduced to Europe, the English wouldn’t have invented the much-loved fish and chips. In southern India, idli would have looked and tasted quite differently today if fermentation and steaming hadn’t been applied in the process.

An example of how food evolved as it traveled far distances across different cultures is faluda. When James and I were in Yangon, Myanmar, we had the dessert for the first time. Imagine a big glass filled with rose syrup, milk, agar-agar jelly in different colors and sizes, tapioca pearls, sweet custard and ice cream, consumed on a very hot and humid day. Several weeks later when we were in Kochi, India we had our second faluda (also spelled falooda). But this time it was much sweeter than what we had in Myanmar, and the filling was different with some ingredients missing and jelly noodles added instead. Later on as we traveled across southern India, we learned from TV that the dessert in fact originated in Persia where it is called faloodeh. The original Persian version has even less ingredients than the one in India, with corn starch vermicelli, semi-frozen syrup and rose water as the main components of the dessert. 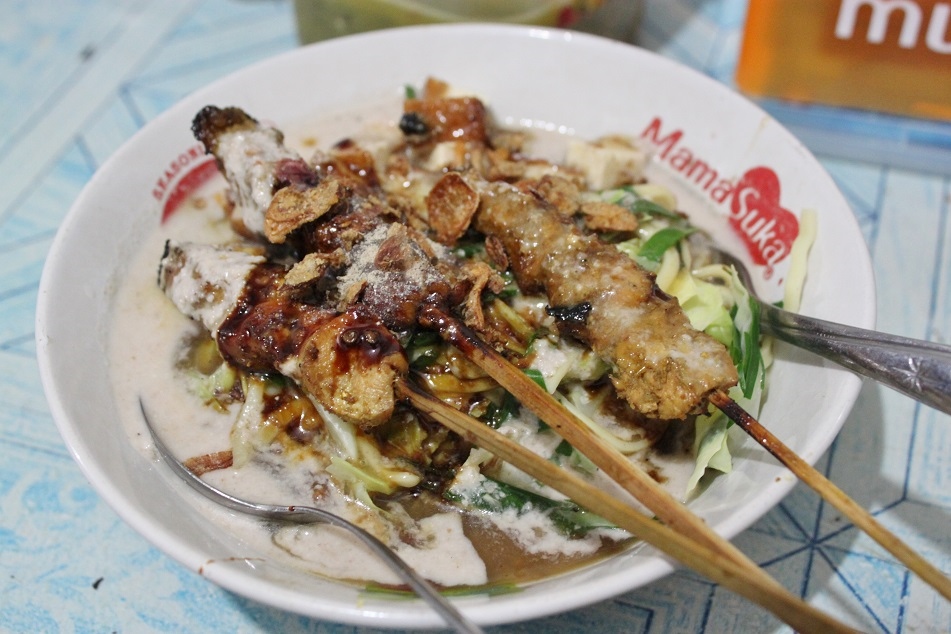 A Bowl of Bakso (Indonesian Meatball), A Chinese-Influenced Dish 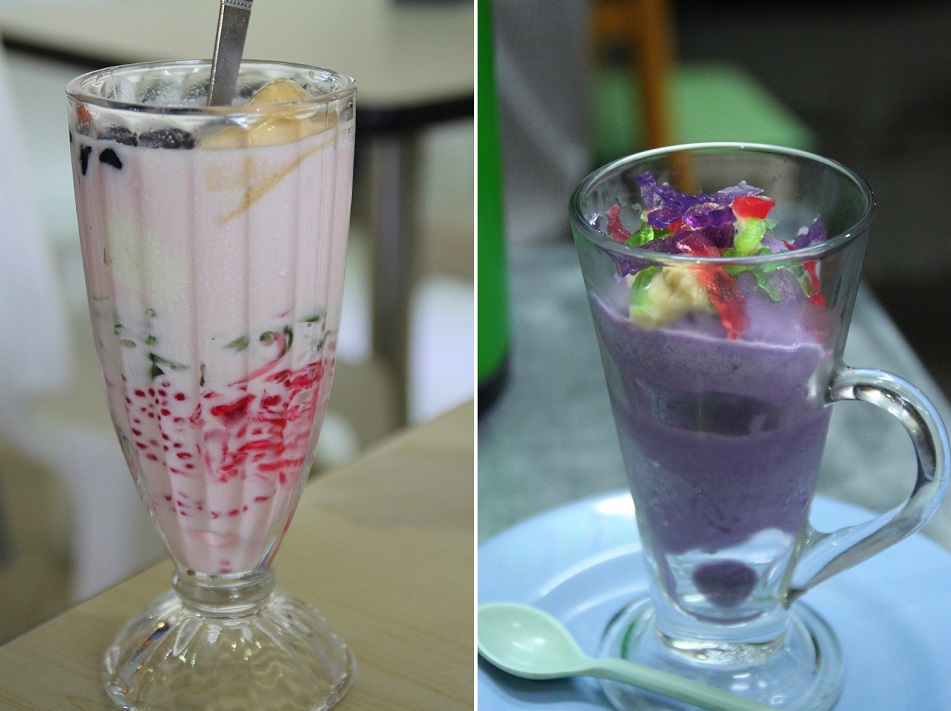 When it comes to spices, it is worth noting the difference between cuisines in the Spice Islands – where nutmeg and clove originate – and in Aceh on the northernmost tip of the island of Sumatra. To my surprise, the people of the Banda Islands and Ternate don’t use too many spices in their cooking and prefer simple seasoning. In Ternate, for example, the locals love raw tuna served with bird’s eye chilies, shallots, and lemon basil, onto which hot oil is then poured to briefly cook the dish. Traditionally clove trees are planted in people’s backyards, and when the buds are ripe they are then sold to other islands and abroad, instead of being used in the local dishes. Aceh, on the other hand, was among the most important trading ports along the Strait of Malacca. As an entrepôt of all sorts of goods, commodities and spices, the locals made use of the abundance of exotic ingredients at their doorstep in their dishes.

Our six-month travels across Southeast and South Asia back in 2015 began with a simple curiosity: how do places along the old spice route look now? But as the months progressed, it became a journey of learning. On this trip, I delved into both regions’ past cultural exchanges – comprising religion, architecture and food, among other things – which are sadly less known today. Who would have thought the fried fish I had in a small town in Kerala tasted almost identical to the one my mother makes at home in Java?

Colonialism is partly to blame as it created borders, dividing communities and gradually severing ties among peoples who had otherwise been culturally related for centuries. As modern nations emerged in the mid-20th century, each of them has been trying to carve out a national identity as unique and distinct from others’ as possible, or in some cases superior than the rest of the world. But ignorance probably plays a bigger part in allowing divisive rhetoric to take center stage these days. When people educate themselves with history and the complexities within it – as opposed to subscribing to outlets promoting alternative facts – they will be harder to divide and rule, bad news for those with a wicked agenda.

On my first night in Toraja, I had baro’bo dalle for dinner which reminded me much of North Sulawesi’s congee. But as far as I know, no one minds that it is now also widely consumed by an entirely different ethnic group in the southern highlands of the island. Is it because both regions are part of the same country? I have yet to find the answer. But one thing for sure, traveling to new places, meeting people who practice religions and customs different from ours, sampling dishes with ingredients we have never heard before, and learning the history of the world are collectively a very powerful weapon to fight chauvinism, that ugly byproduct of nationalism. Wouldn’t it be nice if more people have this “weapon” in hand?

More Dishes to Choose from 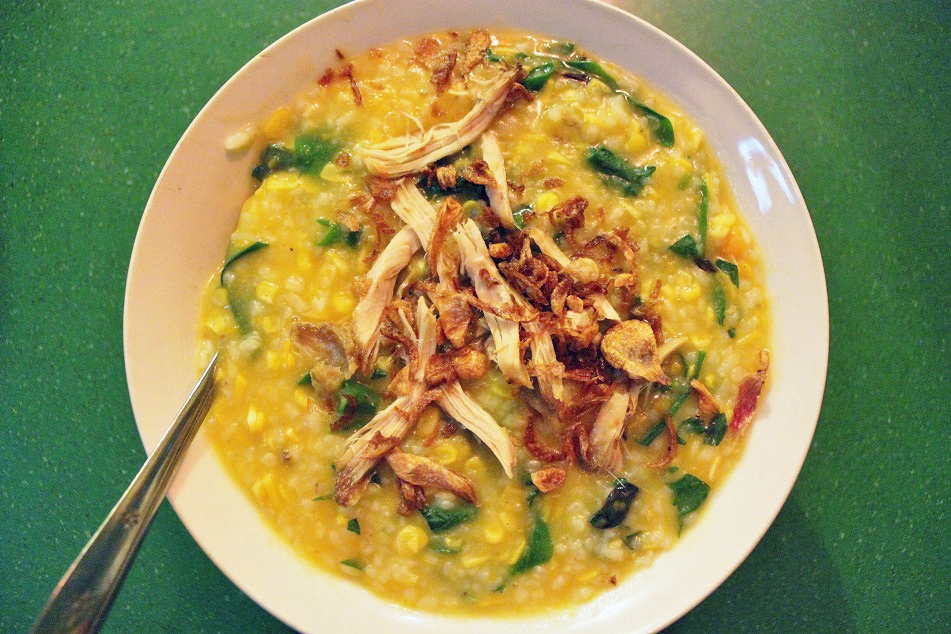 Kopi Kawa, A Drink Made from Brewed Coffee Leaves

~ End of the Spice Odyssey Series ~