Torajan Stone Graves Carved Out of A Rocky Cliff

In the highlands of Sulawesi, far from the coastal communities of the Bugis and Makassarese peoples, live an agricultural society who still hold onto their ancient traditions. Called “To Riaja”, People of the Mountain, by their seafaring counterparts, the Torajan people were largely ignored for a long time both by the Dutch – who colonized much of the squiggly k-shaped island – and by the Bugis community – whose seafaring skills brought them as far as Madagascar between 200 BC and 500 AD.

A theory suggests that the Torajans are the descendants of the people who left the Gulf of Tonkin, in modern-day northern Vietnam and southern China, and settled in many corners of Southeast Asia. The proponents of this theory point out the shape of Torajan house roofs which resemble a boat, a rather intriguing fact regarding to the community’s dwelling in the highlands. Unlike the Batak people in Sumatra who saw European missionaries coming to their land to preach the gospel in the 19th century, Christianity only reached the Torajans in the early 20th century, introduced by the missionaries from the Dutch Reformed Church. Contrary to the Spanish and Portuguese whose global exploration was partially driven by the mission to spread Catholicism, the Dutch were more pragmatic, focusing merely on business interests instead. Therefore only after the dissolution of the Dutch East India Company (VOC) at the end of the 18th century did the Dutch begin Christian missions in the archipelago.

Fast forward to the 21st century, James and I are on our way to the land of the Torajans from Makassar, South Sulawesi’s provincial capital. During the first half of the nine-hour overland journey, the region’s picturesque as well as intriguing karst hills – considered among the most expansive in the world – unfold to our right side. Inside the caves, scattered beneath the rugged surface of the towering hills, lie treasures dating back to the Pleistocene era. An article in an Indonesian magazine describes one of the caves, hidden in a mountain over 1,000 steps above the valley floor, as a prehistoric art gallery, containing hand stencils and depictions of babirusa (wild boar with upward-curving tusks – seemingly created by evolution’s playful twist), pigs, deer, and a boat. Some were drawn more than 35,000 years ago, making them among the world’s oldest rock paintings.

Along our way to Parepare, roughly halfway between Makassar and Rantepao – the capital of the regency of North Toraja – Bugis stilt houses, each decorated with crisscrossed wooden beams above the facade, dot the landscape. In each village, one or more small mosques stand near the houses. However, as we are approaching Makale, the capital of the regency of Tana Toraja (the main regency in the Torajan highland before North Toraja was formed in 2008), a tall statue of Jesus looms from the summit of a nearby mountain. We have now entered a Christian land. The statue itself was created by a Muslim man from Minangkabau, which makes me think of Indonesia’s biggest mosque which was designed by a Christian Batak. 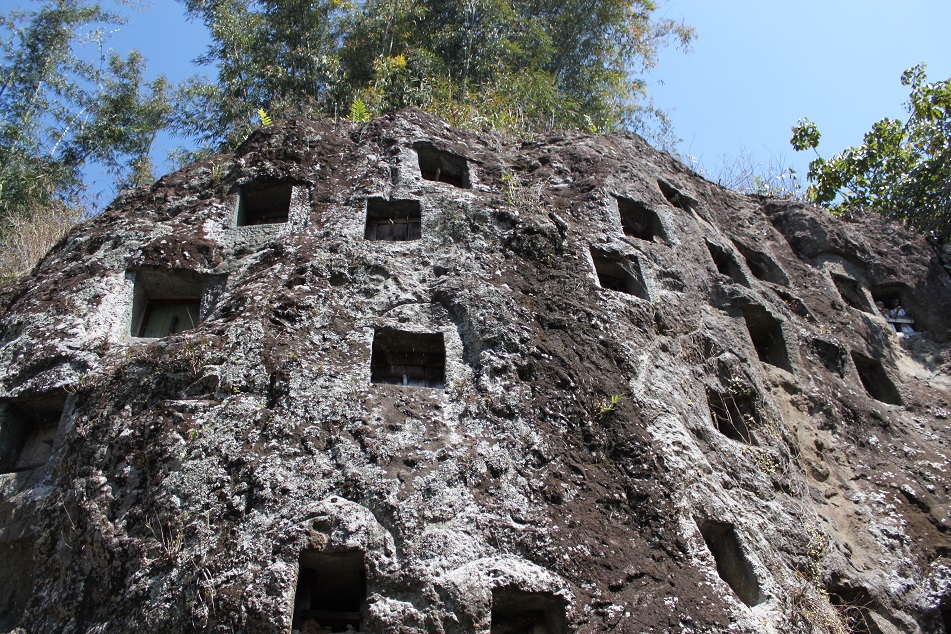 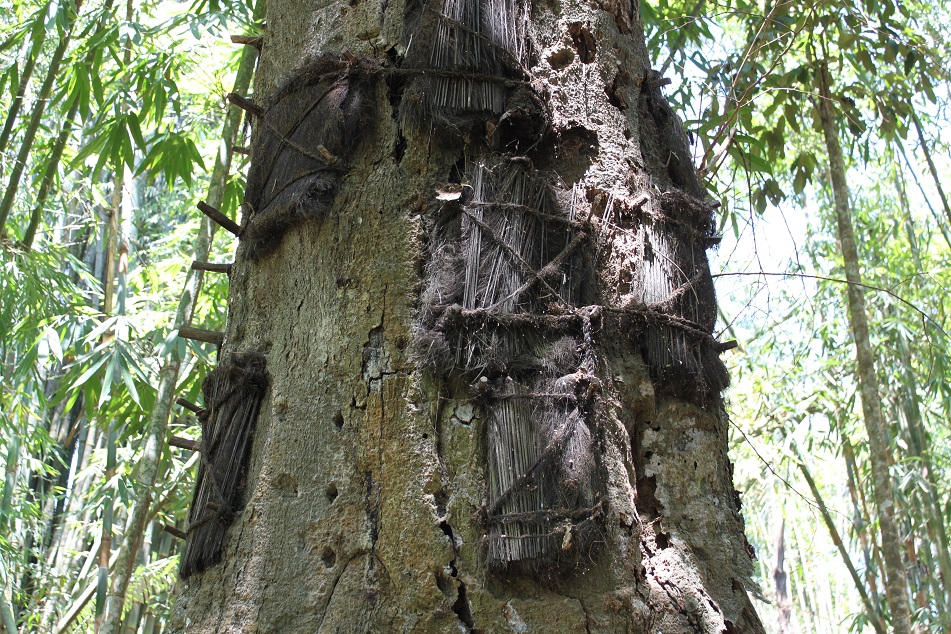 Baby Graves on A Tree in Kambira 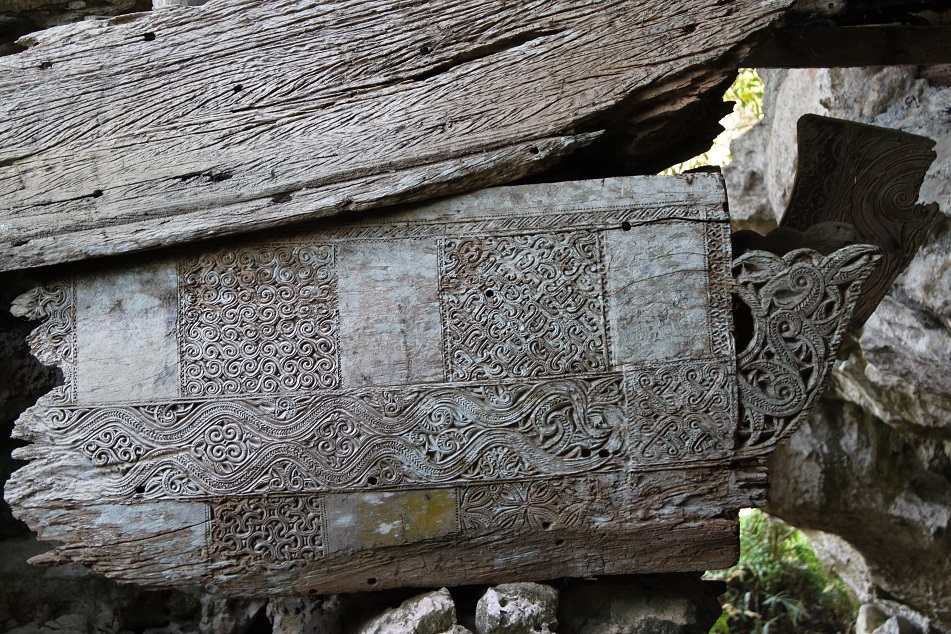 Intricate Carvings on A Centuries-Old Erong

Instead of mosques, now every where I look I only see churches. Meanwhile, Tongkonans – Torajan traditional houses with boat-shaped roofs and elaborate decorations – dominate the landscape. Just before sunset, we finally arrive in Rantepao, a small town with a pleasant temperate climate, a stark contrast to Makassar’s hot and humid air. As night falls, we head out for dinner and find a modest stall by the street. Having hot baro’bo dalle (rice congee with corns and other vegetables) for dinner at a place where the staff is genuinely friendly, our first night in the land of the Torajans ends on an unexpectedly warm note.

After a long and nice sleep, the next morning we head to Lemo, a village peppered with rocky cliffs surrounded by paddy fields. On the face of a cliff, niches were carved out as a final resting place for the dead. The stone burial is a practice that has been carried out by the Torajans for generations, an integral aspect of their traditional belief, Aluk Todolo. In fact, by the mid-20th century only 10% of Torajans had embraced Christianity, while the rest still adhered to the local religion. However, between the 1950s and the early 1960s when Indonesia’s independence was still at its infancy, South Sulawesi was a hotbed for an insurgency aiming to establish a conservative Islamic state in the province. Feeling threatened by the imminent hostilities directly south of their lands, a mass conversion into Christianity occurred among the Torajans. Daniel, our local guide, tells us that today 80% of Torajans are Christians, 15% are Muslims, and the rest still hold onto Aluk Todolo. However, it is evident that centuries-old traditions are still very much alive in this highland community regardless of the people’s faiths.

Below the burial niches on the rock are Tau Tau, wooden effigies of deceased men and women. Their arms stretched out, a gesture to deter anyone from taking anything from the grave. In modern times, the stone burial tradition is still conducted based on a pre-Christian social system where people from the upper and middle classes are buried in rock niches, while those from the lower class are buried in the ground. In spite of Tau Tau’s grave warning, unfortunately they are highly sought after by art collectors who are willing to pay an astronomical price to procure them.

The Village of Ke’te Kesu 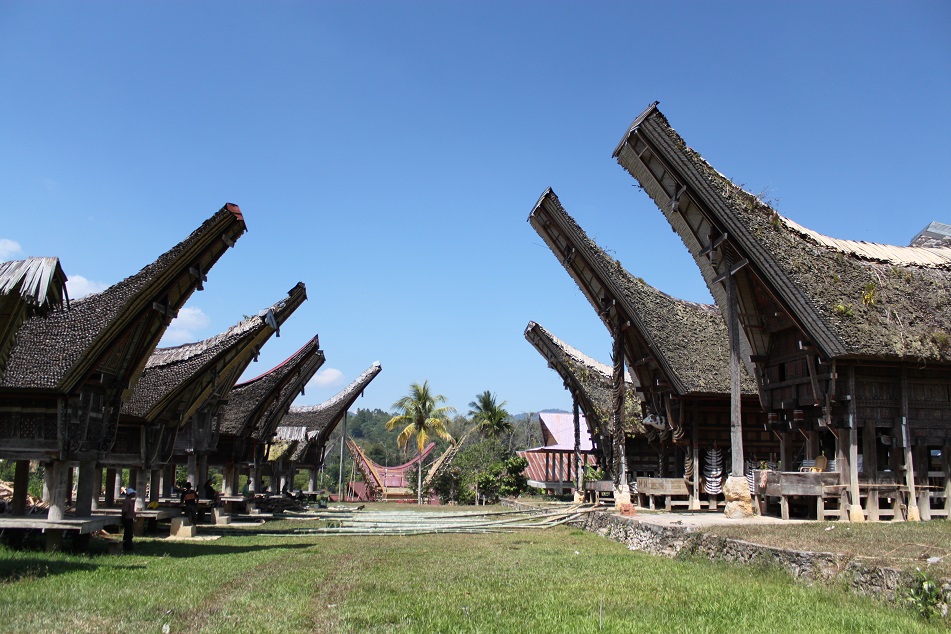 Another Village, Another Set of Tongkonan 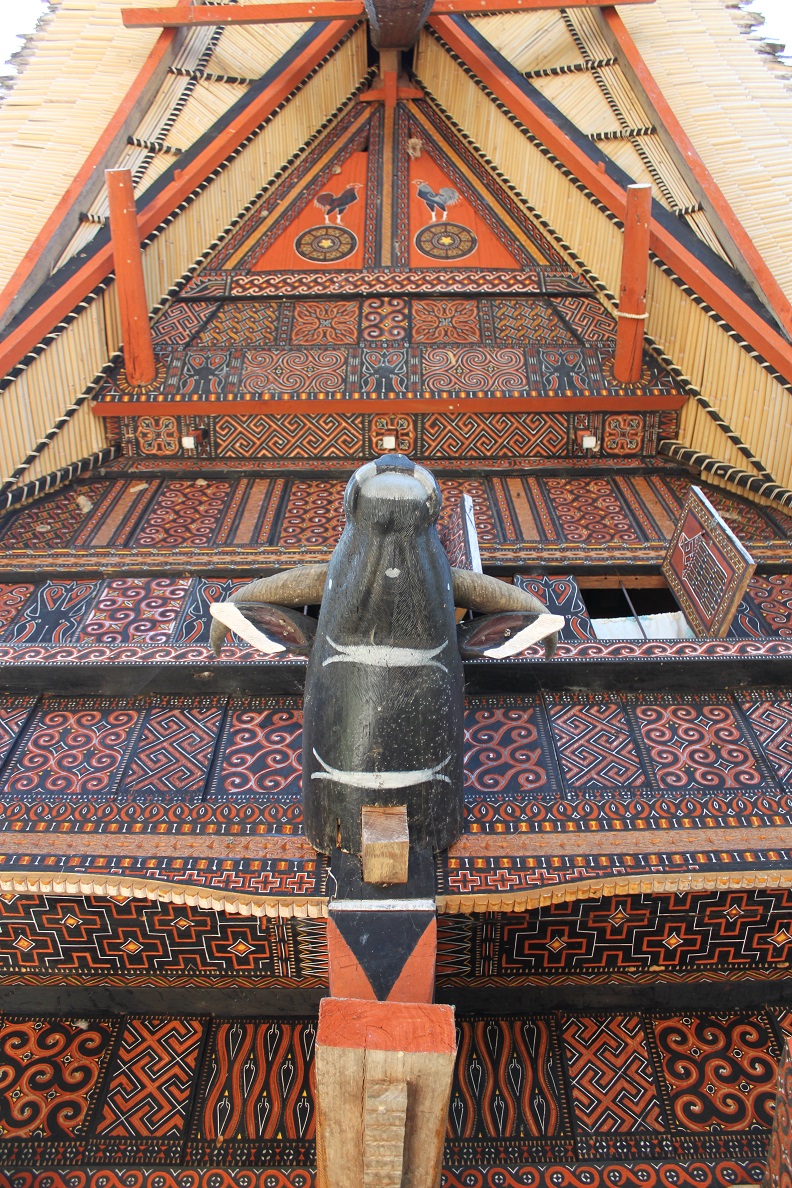 A Closer Look at A Tongkonan’s Facade

Tongkonan Houses in the Village of Pallawa’ 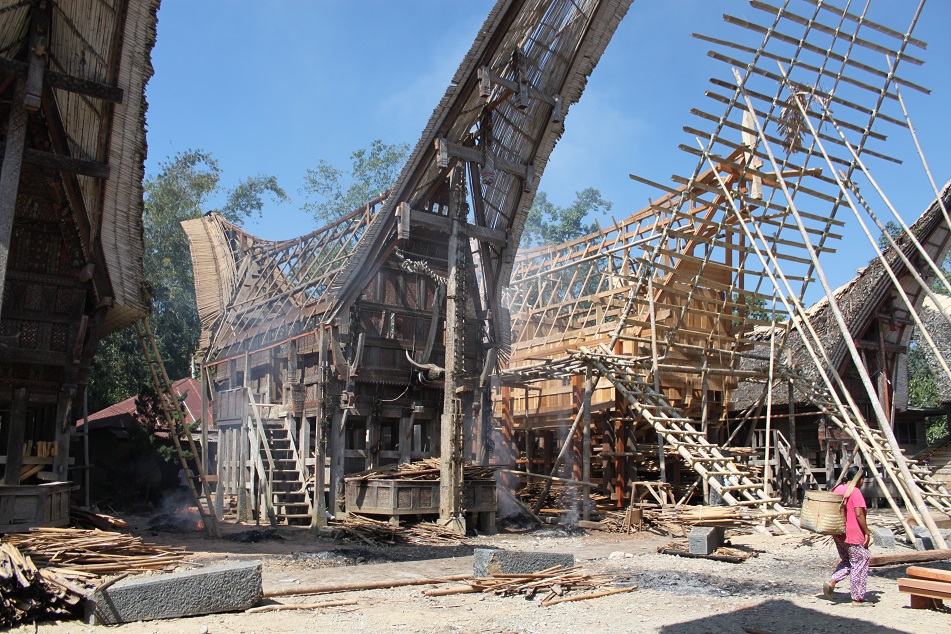 With the Same Amount of Money to Build A Tongkonan, One Can Buy Two of This Car

A Rare Display of Regular and Albino Buffalo Heads

Cross-Section of A Torajan Roof

Death is in fact, and quite ironically, the center of life for the Torajans. Upon hearing our story about the Spice Odyssey, Daniel tells us that the Torajans cannot travel like we do because their money will certainly be spent out for funerals. Whenever an important member of a family dies, relatives from all across the country and abroad will return to their homeland. Meanwhile, those who live in Tana Toraja – traditionally comprising lands both in Tana Toraja and North Toraja regencies – set up temporary accommodations for the homecoming Torajans.

“The total cost for a funeral can be more expensive than the amount of money one spent throughout his/her entire life,” Daniel concludes.

When we are at Lempo where the majestic landscape of the Torajan highlands with ripening paddies are presented before our eyes, I overhear another guide’s explanation to his client about water buffalo’s significance to the Torajans. Historically, in Toraja water buffaloes have always been the most expensive animal, and sacrificing them for the elders in the family is considered an act of respect. However, today people sacrifice them also for pride, and to meet the high demand, water buffaloes from the islands of Java, Sumbawa and Sumatra have to be brought in.

But in a society where death is treasured, and costs the family members their treasures, water buffaloes will remain a currency, for demand will unlikely subside.

Buffalo Fight at A Funeral Ceremony 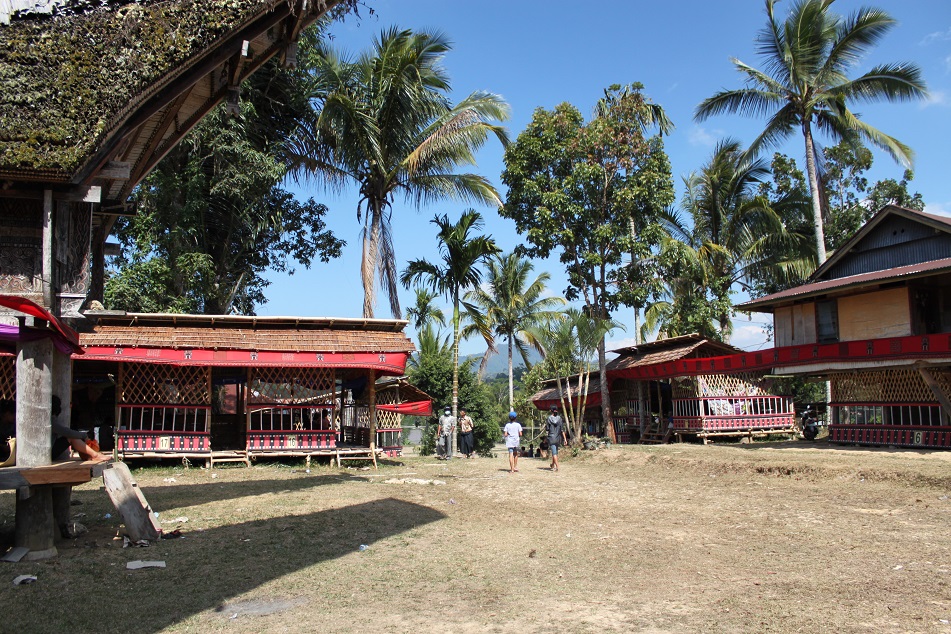 Makeshift Huts for the Funeral

Realistic (and More Expensive to Make) Effigies of the Dead

Erongs Hanging On A Cliff

48 thoughts on “Toraja: Where Life Revolves around Death”