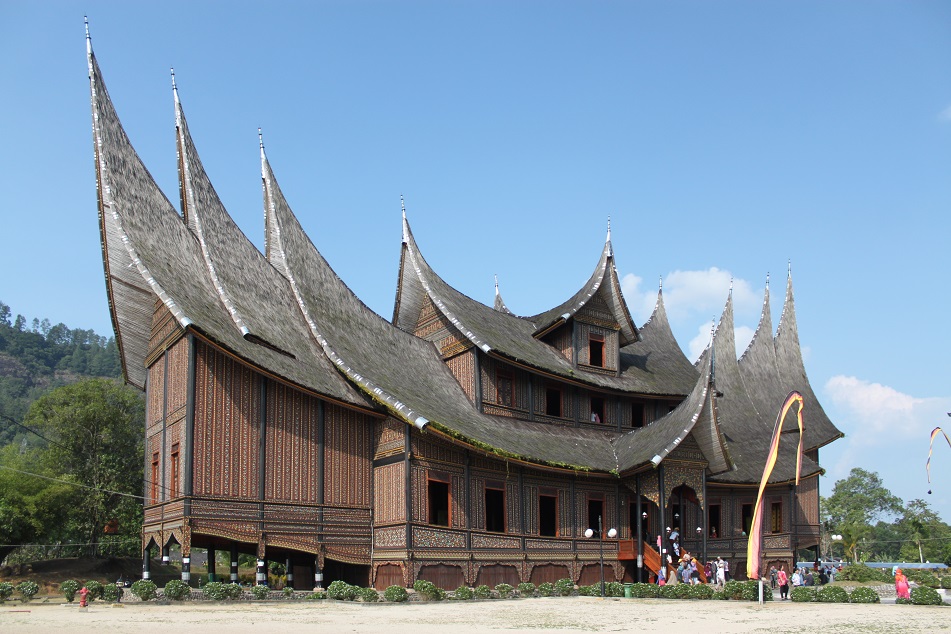 In the highlands of western Sumatra live a society with a unique culture where house roof is anything but unimaginative and women own the family’s wealth. In spite of being Muslims, their life is very much dictated both by the Quran and the matrilineal custom. Their dishes are always cooked in a generous amount and variety of spices – introduced by ancient traders who brought them from faraway spice islands – and are now easily found in all corners of modern-day Indonesia.

Minangkabau, an ethnic identity often associated with Minang or Padang restaurant all over the country as well as abroad, emerged in the 14th century when a Javanese prince by the name of Adityawarman went to Sumatra and established a new dynasty. A follower of Tantric Buddhism, the new king of Pagaruyung, named after the capital of the kingdom, ruled for almost three decades before it fell into obscurity for more than a century.

In a 16th century book on places he visited in South and Southeast Asia, a Portuguese apothecary by the name of Tomé Pires also chronicled contemporary travelers’ accounts of the land of Pagaruyung. Almost two centuries after Adityawarman’s reign, Pagaruyung was ruled by three kings – King of the World, King of Custom and King of Religion – by the time of Pires’ writings. Curiously, only one of the three kings was Muslim. It is apparent that from northern Sumatra Islam reached the coastal cities of Java much earlier than it did the western Sumatran highlands.

In the centuries that followed the Minangkabau (or Minang for short) people gradually converted to Islam. Today, similar with the people of Aceh, the Minang people are often regarded as a rather conservative Muslim society. However they retain some aspects of their matrilineal culture. The house, for instance, is owned by women while men only help constructing it. Traditionally, a boy lives in the house until he reaches puberty and returns to the house only after he gets married – to his wife’s house that is. And talking about Minangkabau house, it is by no means ordinary. 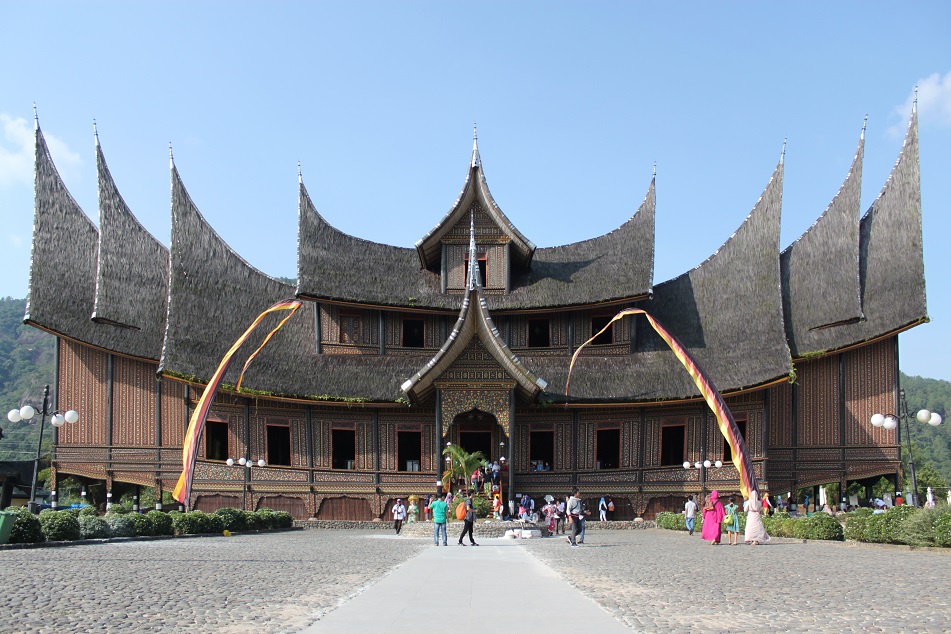 The Palace Has Been Repeatedly Burned Down and Rebuilt

Roofs Pointing to the Sky

Detailed Wood Carvings at the Palace

Interior of the Palace Decorated with Colorful Fabrics

An Artwork inside the Palace 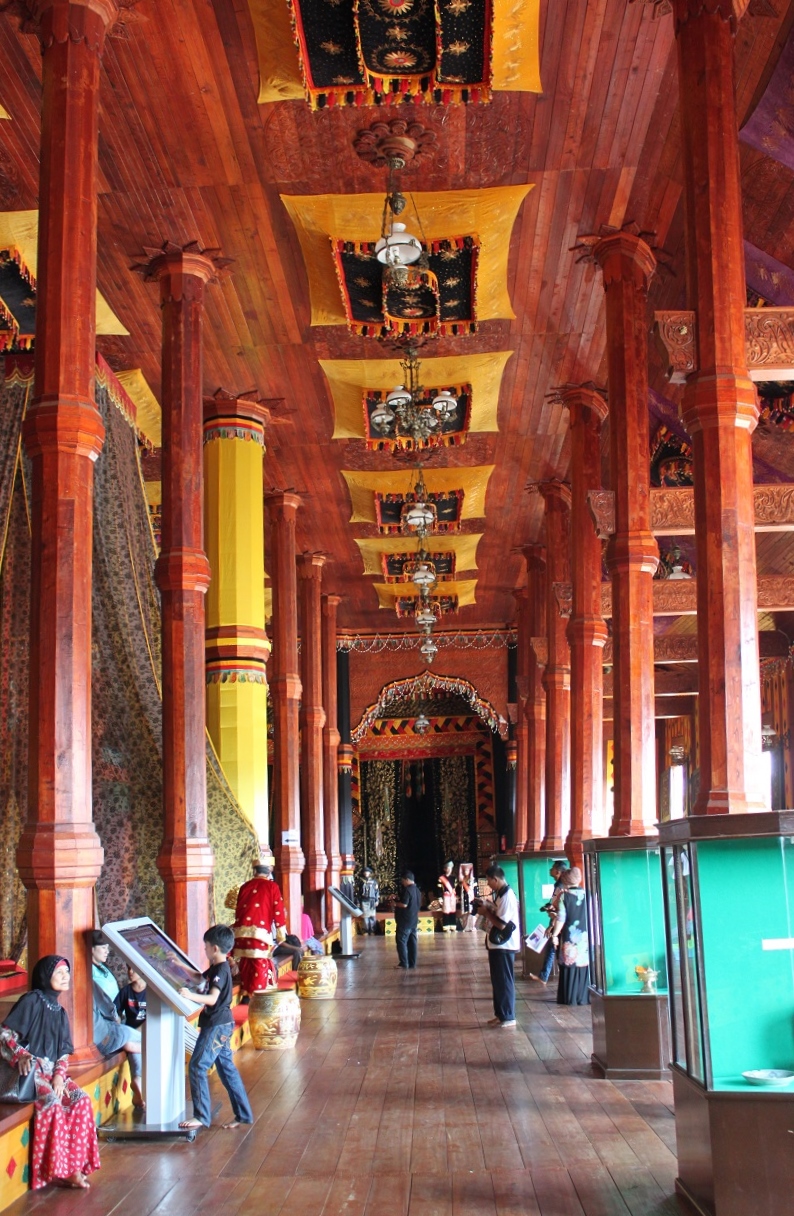 High Ceiling at the Main Hall of the Palace 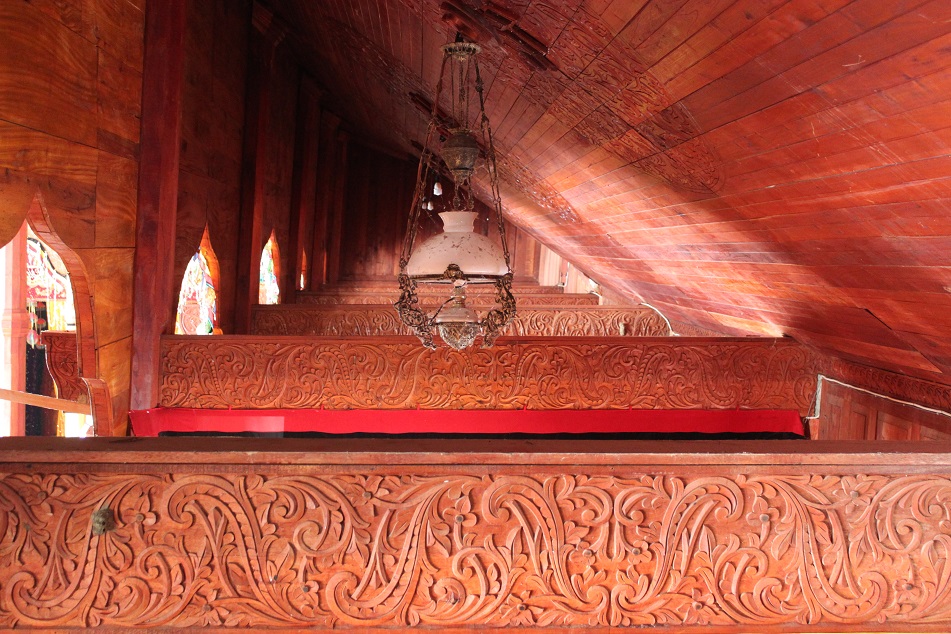 Elegance in the Absence of Bright Colors

Taking A Peek into the Main Hall

Rumah gadang, ‘big house’, is the traditional house of the Minang people. Aptly named for having multiple rooms, the ‘ownership’ of the rooms changes from time to time depending on how many daughters one family has. In a family of three daughters, for example, the eldest will get the master bedroom once she’s married. But when the second daughter is married, her elder sister and her husband have to move to bedroom number two. Eventually it is the last daughter and her husband who will get the master bedroom.

A son’s relationship with his father is no less complicated. Customarily, a son is taken care by his uncle, not his own father as he has to take care of his nephew. As the boy grows up and leaves the house, he will spend most of his night time at the village mosque learning the Quran. When he becomes an adult, he will travel far from home to look for opportunities (a tradition called merantau). Typically he will start a restaurant or photocopy business, or join other Minang people who have been running their businesses for years. Nevertheless, some Minang men forayed into unusual paths including the politics. One of Indonesia’s founding fathers was in fact a Minang.

Most of the time, the complicated family affairs happen either in the rice paddies surrounded by verdant hills, or under the multi-layered roofs of old Minang mosques, or beneath the pointy curves of rumah gadang roofs which are inspired by water buffalo’s horns. In fact, the word kabau in Minangkabau means water buffalo in local language. The grandest of all rumah gadang is none other than the former royal seat of Pagaruyung kingdom, the Pagaruyung Palace. Built in the 17th century, the palace was used until the 19th century when it was burned down in a war. Its current form, considerably smaller than the original structure, is the third reconstruction of the palace following a lightning strike in 2007 which burned down the entire structure as well as precious artifacts of the kingdom.

Present-day travelers from Germany and Belgium who visit West Sumatra during festive seasons might feel very welcomed for they will find the colors of German and Belgian flags – black, red and yellow – everywhere. But it is in fact the Marawa flag, symbolizing three important aspects in Minangkabau society: law, religion and knowledge. However law, religion and knowledge are apparently not only important for the Minang people. They were part of the reasons for the large number of Europeans leaving for Asia and beyond in the 15th century, an event that would forever change the fate of people living thousands of kilometers away from the Old Continent. One event in history marked the beginning of this new era. 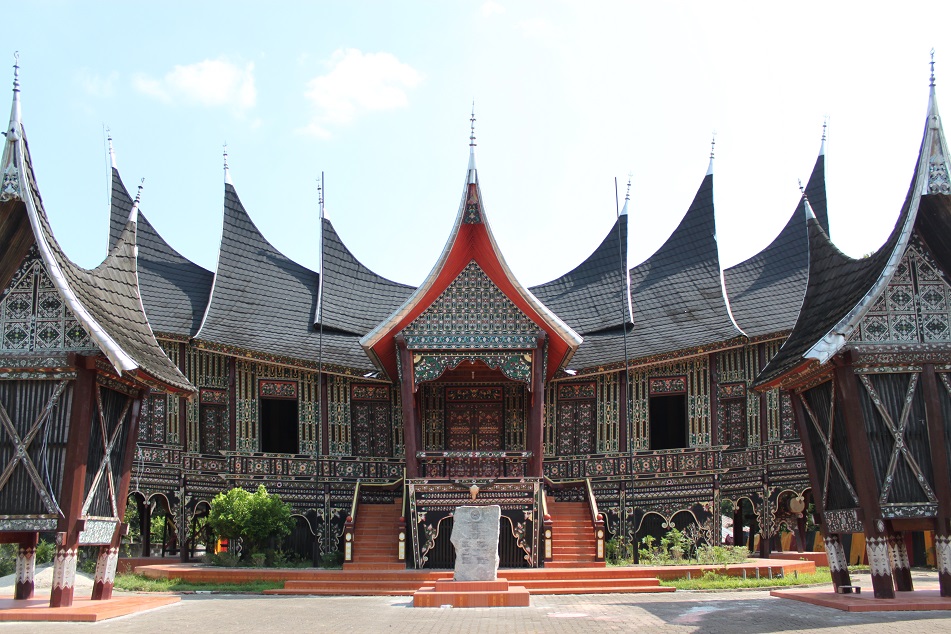 Istano Silinduang Bulan, A Smaller Palace Not Too Far from Pagaruyung 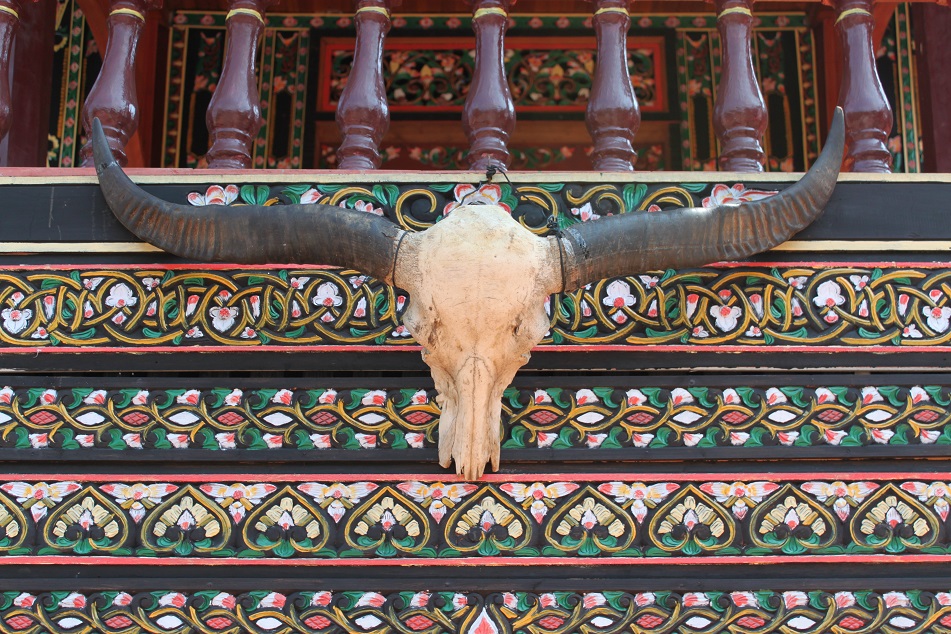 Minang People and Buffaloes are Inseparable

Rumah Gadang Kampai Nan Panjang, One of the Oldest Traditional Houses in the Region

Another Old Rumah Gadang with A Touch of Modernity

Fading Carvings at the Old House

The 17th-Century Masjid Asasi, One of the Oldest Surviving Mosques in the Province 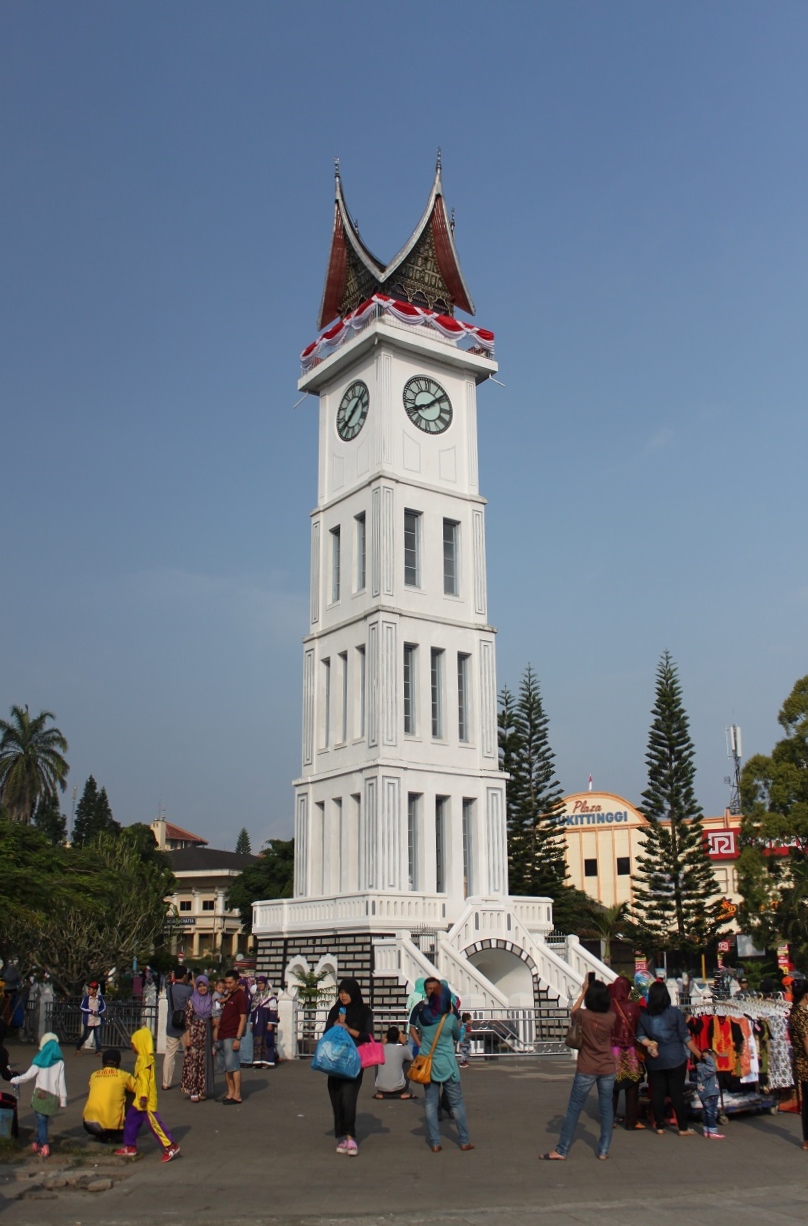 One of the Creamiest Durians in My Life

West Sumatra Grand Mosque, Still Under Construction on My Visit

62 thoughts on “Minangkabau: the Land of Buffalo Horns”