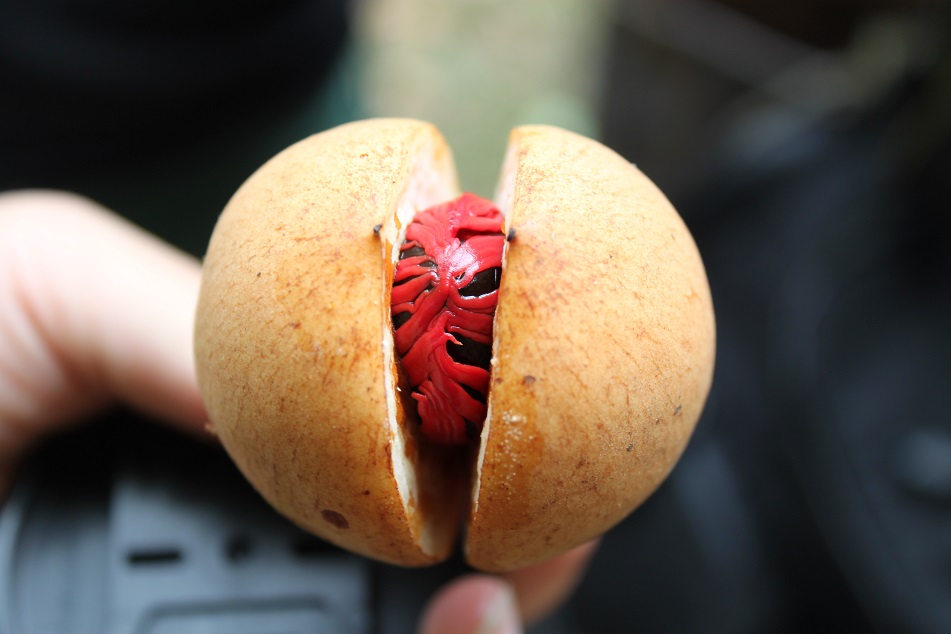 Nutmeg, Once A Very Expensive Spice

In the 16th century, upon the discovery of direct sea routes from Europe to the Spice Islands, Portugal and Spain asserted their dominance in the world’s spice trade which for centuries were traditionally controlled by the Javanese, Indian, Arab, Persian and Chinese merchants. Clove became one of the spices ferociously fought over by competing European powers in Southeast Asia, and for decades the rivalry between Portugal and Spain was centered around the islands of Ternate and Tidore.

The other spice was nutmeg, originating from the Banda Islands, a small chain of volcanic islands situated amid seas as deep as 7,000 m to the southeast of Ambon. The Portuguese arrived at the Bandas in early 1512 during the expedition from Malacca in search of the sea route to the Spice Islands, and stayed on the islands for about a month.

However hostilities from the local people in Ternate and Ambon kept the Portuguese busy, and they only returned to the Bandas 17 years later, led by Garcia Henriques. Henriques’ plan to build a fort on Banda Neira – the main and most important island of the Bandas – was fiercely opposed by the locals. The increasing resistance from the Bandanese eventually forced the Portuguese to buy nutmeg from traders in Malacca, instead of procuring them all the way from the Banda Islands.

Nutmeg, known to the Europeans as noz-moscada, noix de muscade or noce moscata, was only found in Banda Neira, Banda Besar and several other remote small islands in the Banda Sea. Not only used in various dishes for its earthy, bold, aromatic and nutty flavor, nutmeg was highly valued for its medicinal properties. In the Elizabethan era (mid-16th to early 17th centuries) nutmeg was believed to cure all kinds of sickness, pushing its price more than 300 times the original price.

Roughly the size of a golf ball, a nutmeg fruit contains a dark-colored seed (the nutmeg itself) wrapped in shiny red lace called mace. Both are the most valuable parts of a nutmeg tree, while the fruit is often made into a candied snack by the locals.

Nutmeg Drying in the Sun 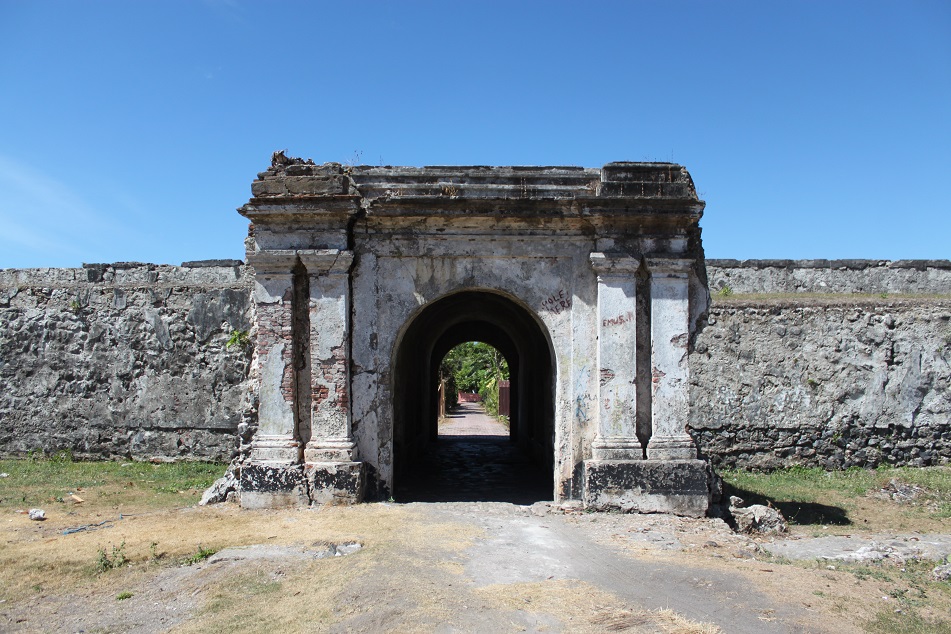 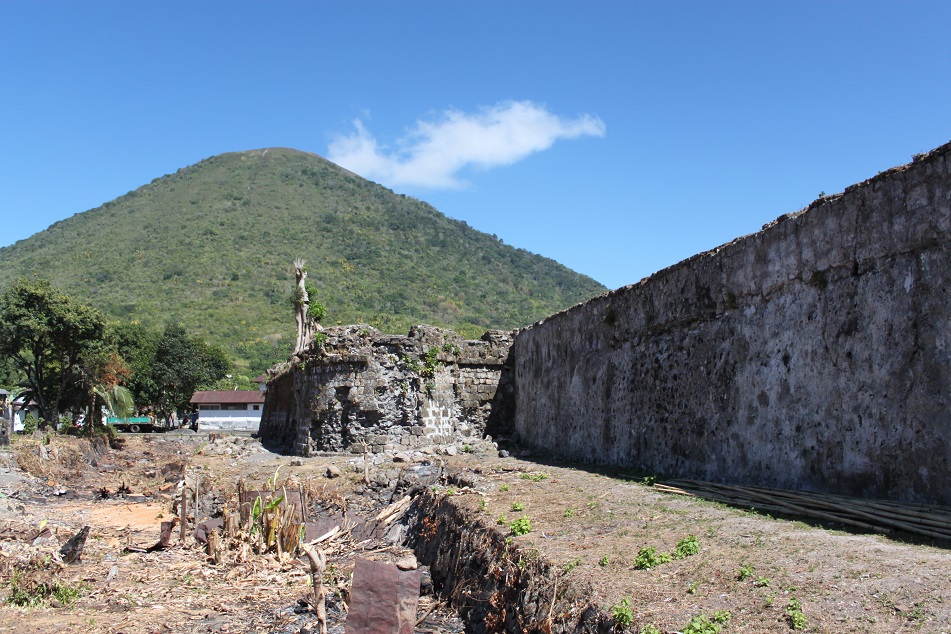 The Crumbling Walls of Fort Nassau

The Dutch who were late in joining the spice race by several decades sent an expedition in 1595 to reach the archipelago which now makes up modern Indonesia. A year later the expedition, led by Cornelis de Houtman, reached Sumatra, and Banten on the western part of Java several weeks afterward. De Houtman’s journey continued along the northern coast of Java. By the year 1597 some of the original crew members of de Houtman’s expedition decided to stay in Bali, while the rest returned to the Netherlands with precious spices loaded onto their ships.

Subsequent missions to the East Indies were launched in 1598, and due to the threat posed by England’s East India Company (the EIC – chartered in 1600) as well as to eliminate competition among the Dutch themselves, the Dutch East India Company (the VOC) was established in 1602. In the centuries that followed, both companies were involved in a long competition to dominate the lucrative spice trade in India, Southeast Asia, and the Far East.

In 1607 a 20-year-old merchant by the name of Jan Pieterszoon Coen left the Netherlands for the Banda Islands joining a mission led by Pieter Verhoeff. Two years later, they arrived at Banda Neira and informed the locals about their intention to build a fort on the island. The Bandanese – who for centuries had been trading with merchants from faraway nations in spite of the Bandas’ remoteness – understandably opposed to this plan. Weeks after Verhoeff’s arrival, he and several other Dutchmen were invited by orang kaya – literally ‘rich men’ who were the leaders of the Bandanese – to negotiate the compensation for the construction of the fort. But then they were killed by the locals, while a number of Dutch merchants, including Coen, managed to escape. Two years later, the construction of the fort was continued by Admiral Verhoeven who was soon killed by anxious Bandanese. In the same year, however, the new fort was completed and named Fort Nassau.

J. P. Coen returned to the Netherlands three years later, and in less than ten years’ time he moved up from a lower-ranked merchant to the accountant-general of all VOC offices in the East Indies and eventually the governor-general of VOC in 1617. Exploiting the rivalries among local rulers, Coen’s strategy in controlling the spice trade in the East Indies often involved supporting one side of the belligerents who gave him the most favorable concession. With Coen at the wheel, the VOC secured a nutmeg monopoly in the Banda Islands. However the Bandanese preferred to trade with the EIC for the better prices offered by the English company, and this led to a VOC mission in 1621 to reassert control of the islands by way of killing thousands of local inhabitants in the hands of Japanese mercenaries, sparing only about one thousand souls to be employed as laborers at nutmeg plantations.

Former Office and Residence of the VOC Governor 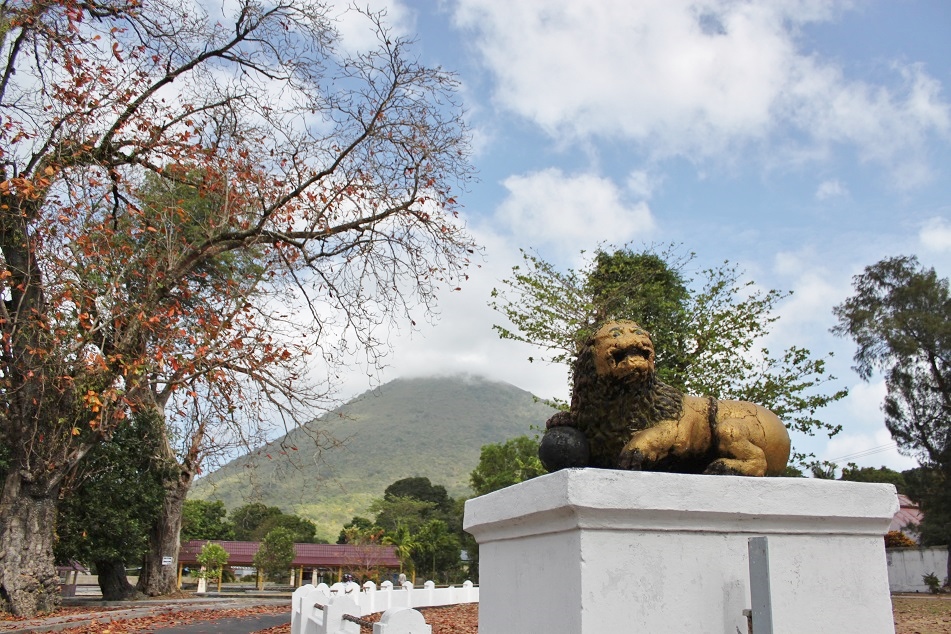 A Reminder of Banda’s Significance in the Past 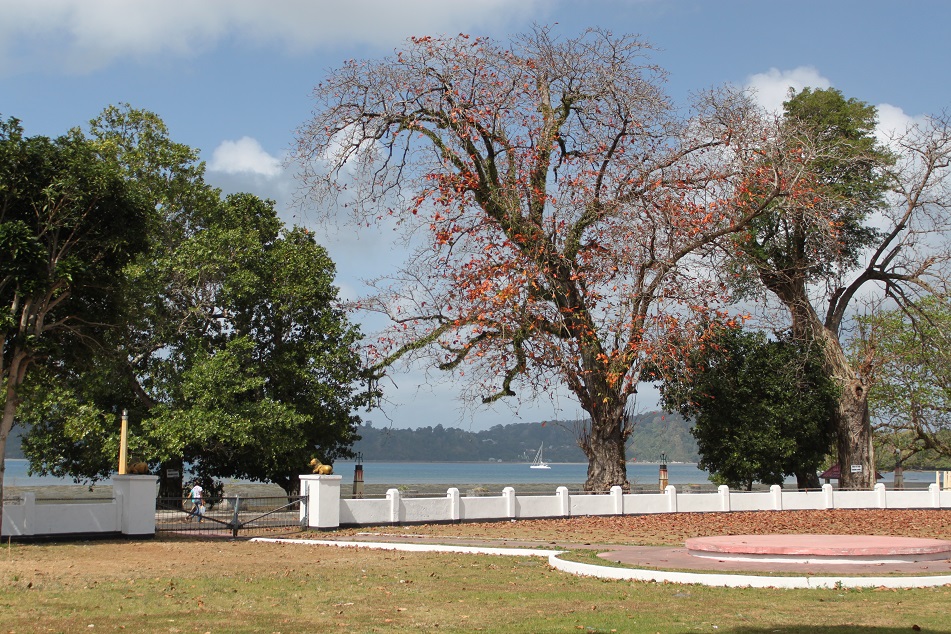 View to the Island of Banda Besar 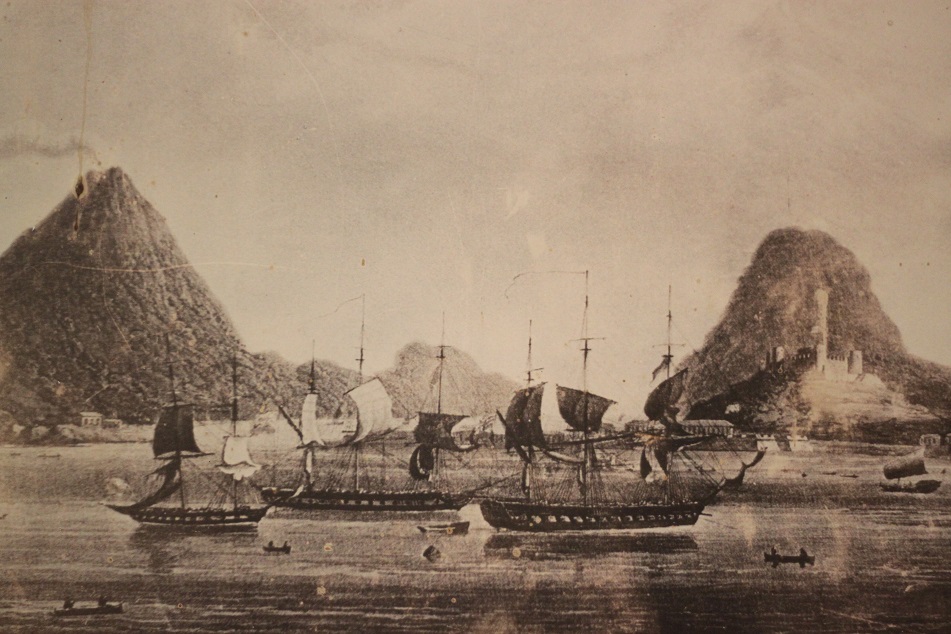 Banda in the Past

The Bastion of Fort Belgica

The Biggest Fort in the Banda Islands 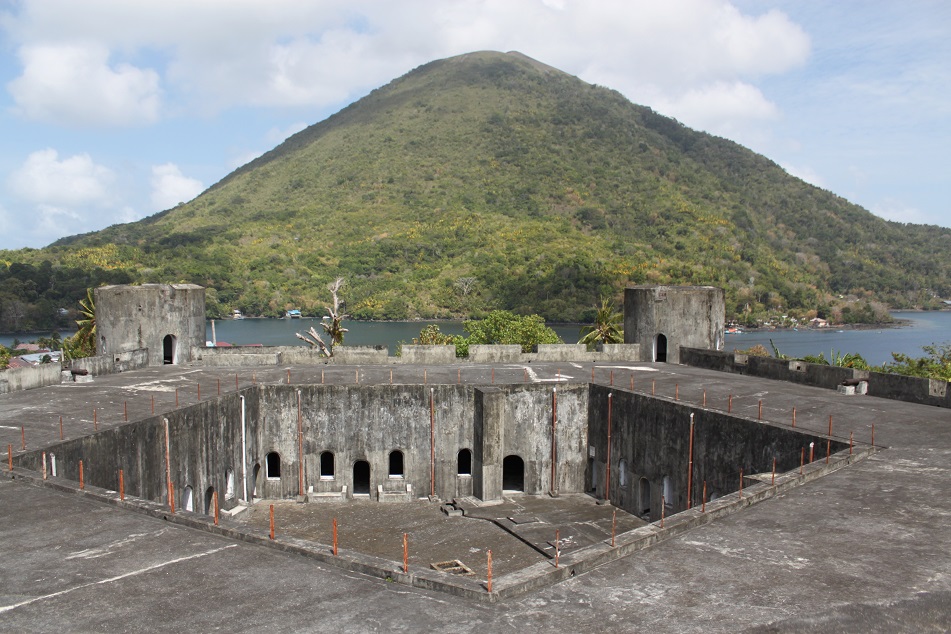 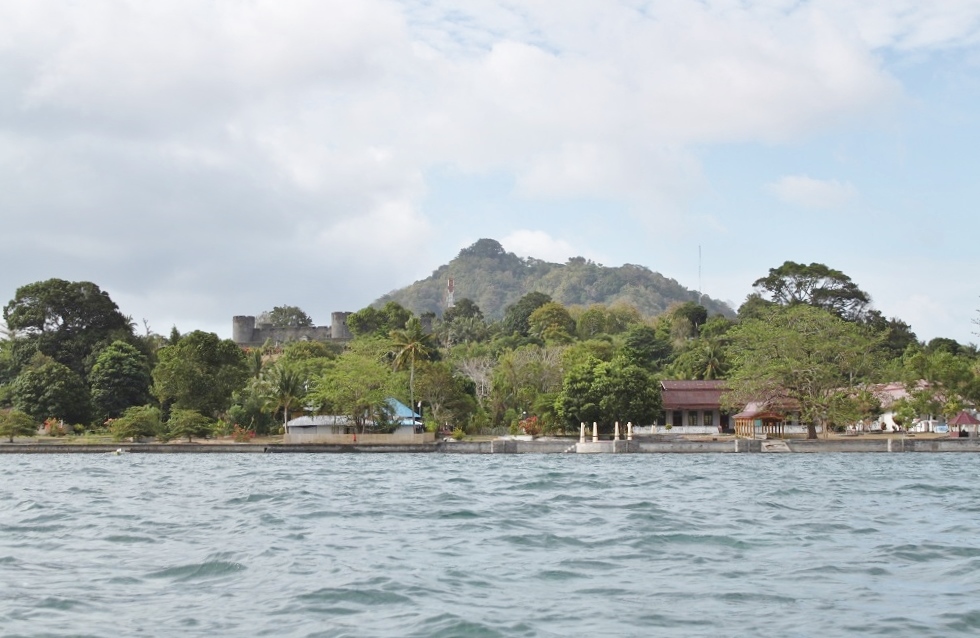 Fort Belgica as Seen from the Sea 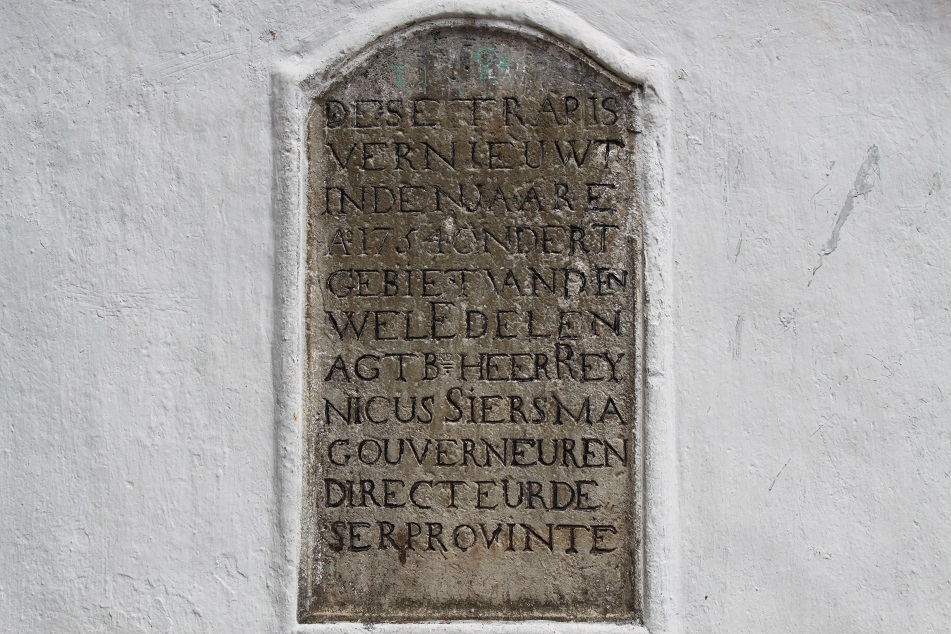 A Vestige of the Dutch Colonial Administration

Constant threat from the EIC urged the VOC to build a bigger fort on a hill overlooking Fort Nassau. The construction of Fort Belgica commenced in the early 17th century, and in the decades that followed the fort underwent several modifications to strengthen its fortification. The Dutch monopoly over nutmeg trade continued for about two centuries, with occasional skirmishes with the English.

However, despite having Fort Belgica to overlook Banda Neira and its surrounding islands, a British captain by the name of Christopher Cole successfully captured the fort in 1810 without encountering significant resistance from the Dutch. This event was in fact a ripple effect of the war between Great Britain and Napoleonic France, a period in history when the Netherlands was a vassal state of the latter. Four years later following the signing of a treaty between Great Britain and the Netherlands in London, the British returned all colonial possessions of the Dutch acquired during the Napoleonic Wars, excluding some colonies in Africa and South America. Nevertheless, before returning the Bandas to the Dutch, the British took many nutmeg trees with them to be transplanted in their colonies, including Ceylon (modern-day Sri Lanka). This had effectively ended Dutch long monopoly of the nutmeg trade.

Gradually the Banda Islands’ importance diminished for it no longer was the only place where nutmeg trees grew. Its remoteness was exploited by the Dutch rather as a place to impose exile on some of Indonesia’s independence leaders, including Mohammad Hatta and Sutan Syahrir, the country’s first vice president and prime minister respectively. Today Banda Neira is still the most populated of all small islands of the Bandas, home to roughly half of the Banda Islands’ 22,000 residents. People live among historical sites, silent witnesses to the islands’ global importance centuries earlier. During my visit, historical houses, museums and forts were often closed. Finding the caretakers of those places or asking the owner of our hotel to call them were the only ways to visit the colonial heritage buildings.

Banda Neira’s once bustling harbor is now mostly sleepy and quiet, with large overcrowded ferries coming to the island every other week from Ambon. Tourists were quite rare and the locals were never in a hurry. Lunch and dinner took at least half an hour to be served, my mobile phone was out of reach for two weeks, and the island’s small air strip was used by motorbikes more often than airplanes. It was a far cry from how the islands used to be at the height of the spice race.

An Old Church in Banda Neira

The Main Mosque in Town 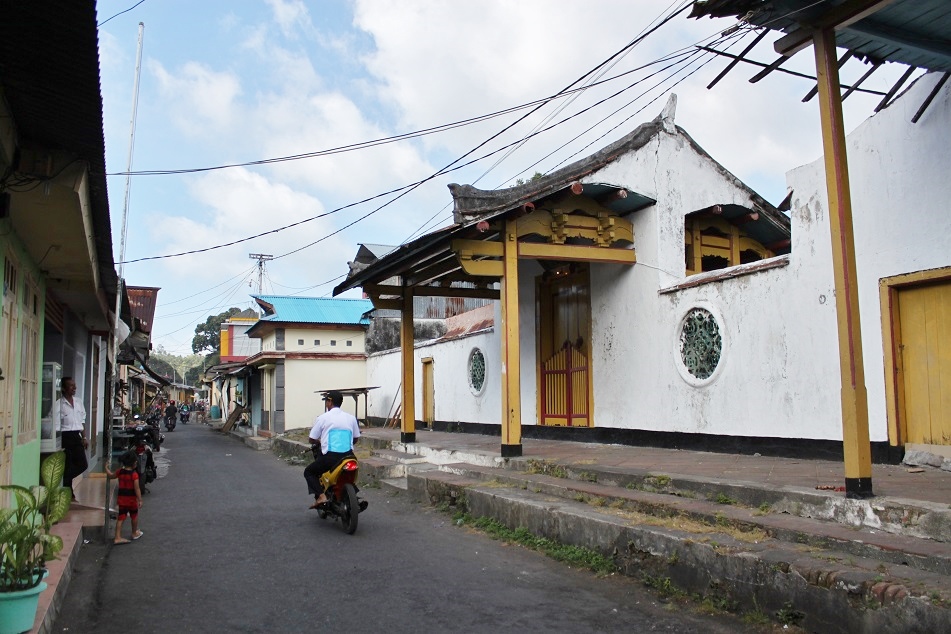 Another Mosque in Town 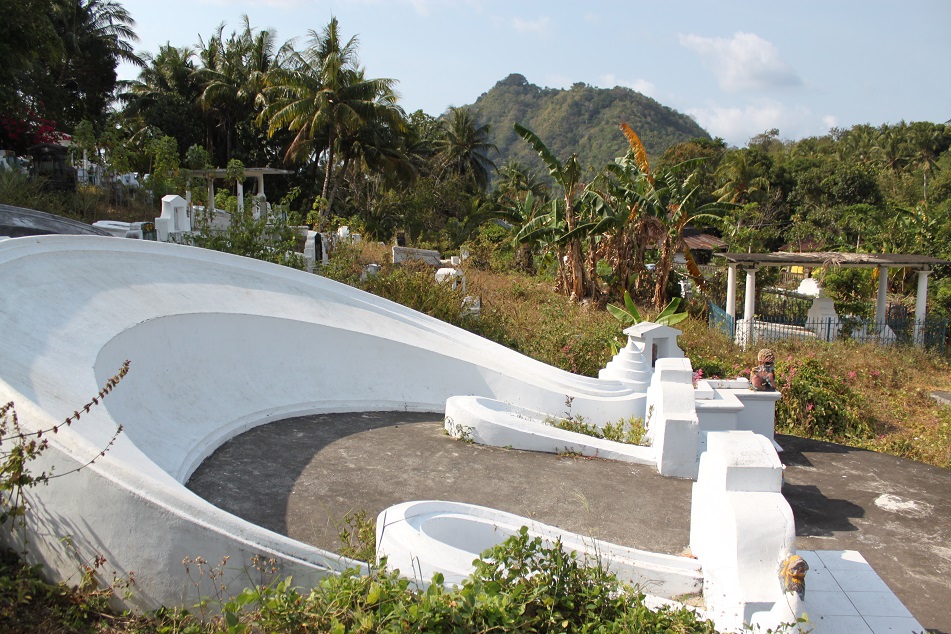 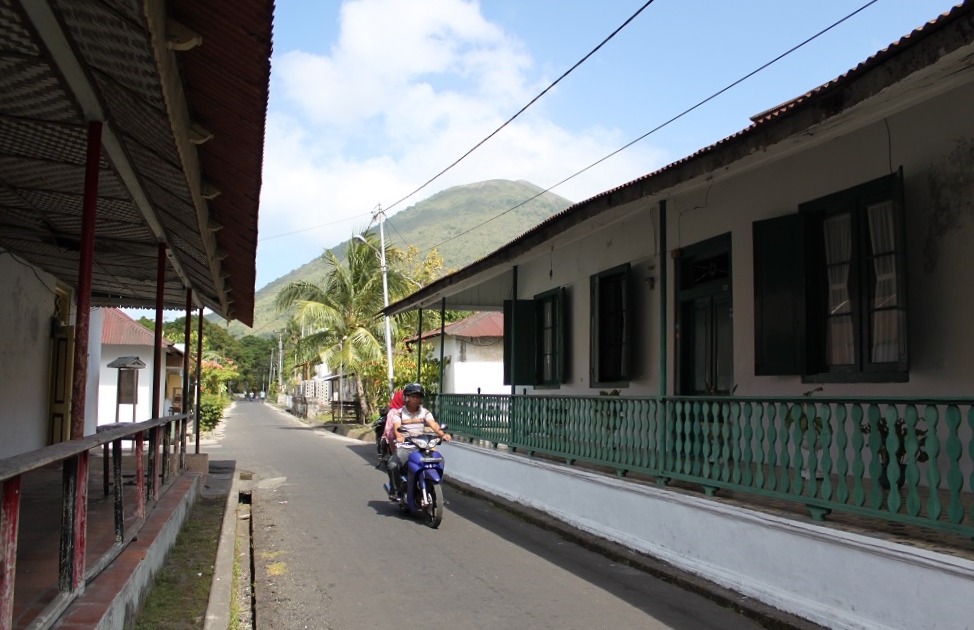 A Street in Banda Neira

The Main Street on the Island

72 thoughts on “Islands that Changed the World: the Bandas”