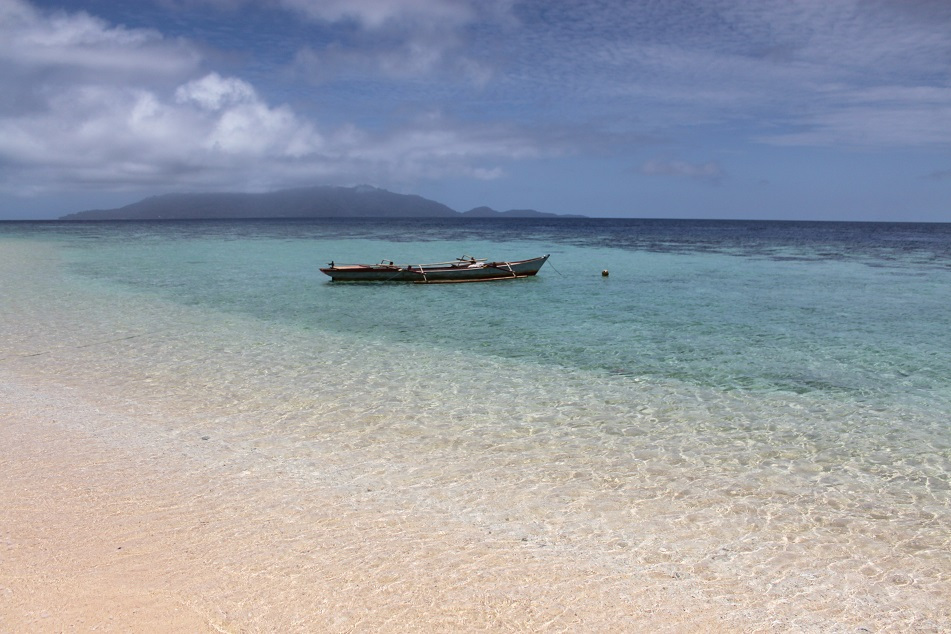 We were in the middle of the Banda Sea, the deepest body of water in Indonesia with some parts going as deep as 7,000 m. The violent waves reared up the small boat, filled with Fiona from the Netherlands, Torben from Germany, Eric and Annie from France, James and I, and two local crew. The farther we left the calm waters around Banda Neira and Banda Besar, the more intense the force of the waves crashed against our boat. A month earlier a Polish journalist that we met in Ternate warned us about how high the waves in the Banda Sea could reach, and now we were experiencing it firsthand.

Seasickness became a part of any of my travels that involved boats, until Banda. I was too focused on holding onto the wooden beam across the center of the boat, with salt water splashing over my face and body every now and then, and the boat rocking violently alternating between the starboard and port, my usual seasickness didn’t even bother to kick in. Torben, on the other side, showed no concern at all and kept trying to mount a water insulation to his underwater camera. If only I were that calm and composed.

One hour later, finally we arrived at Hatta Island, also known in the past as Rozengain. “This is like that TV program, Don’t Tell My Mother,” James told us with a clear sign of relief. In the meantime, accompanied by our boatmen and their local acquaintances, Fiona decided to find a place to sit and recover from the queasiness caused by the rough ride. It didn’t take long for the rest of us, however, to walk through the white sand beach and jump into the calm and clear water.

The beach’s turquoise color was suggestive of a beautiful underwater world that lay beneath the surface. I had previously snorkeled in Komodo National Park near the island of Flores and off Menjangan Island to the northwest of Bali; both places hosted some of the most beautiful underwater gardens in Indonesia. Yet, I was still very impressed to see the scale of the beauty at Hatta. Floating above a network of table corals, some as big as a human body, which formed a colorful carpet with a multitude of other coral species where a wide array of fish swam around, indifferent to a few humans watching them with admiration, was a surreal experience. Trumpetfish, goatfish, Moorish idol (Gill in Finding Nemo), butterflyfish, vagabond butterflyfish, Clarke’s anemonefish, triggerfish and masked puffer were some of the fish species I spotted. They were frolicking around the reefs up to the point where the shallows dropped into the dark and mysterious depths of the Banda Sea – or as the fellows in the same animated movie call “the Drop Off”. Unfortunately, unlike at Menjangan, I didn’t have any underwater camera with me this time.

I was not the only one who was having a good time. Hatta was Fiona’s first ever snorkeling experience – which obviously set a really high bar for her future underwater adventures. Meanwhile, Torben swam a bit further to the south of the beach and spotted two turtles. But all of us envied Annie’s futuristic-looking snorkeling mask which would suit Hollywood’s science-fiction movies. A few days later James and I met Monica from Switzerland who had spent four nights in Hatta and witnessed some spectacular sights: one day she saw whales swimming near the surface, and another day mobula rays jumping out of the water. 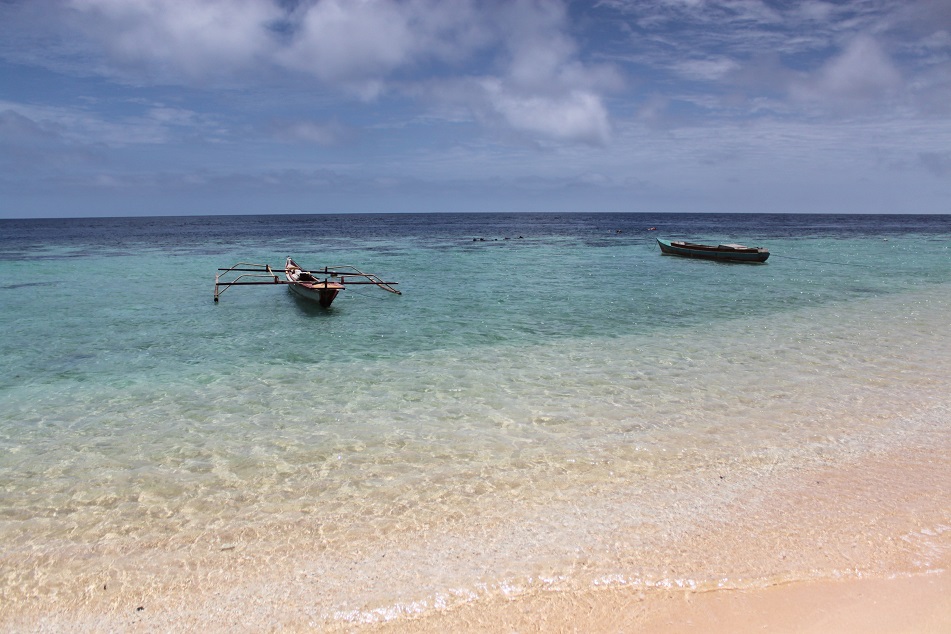 A Pristine Beach on Hatta 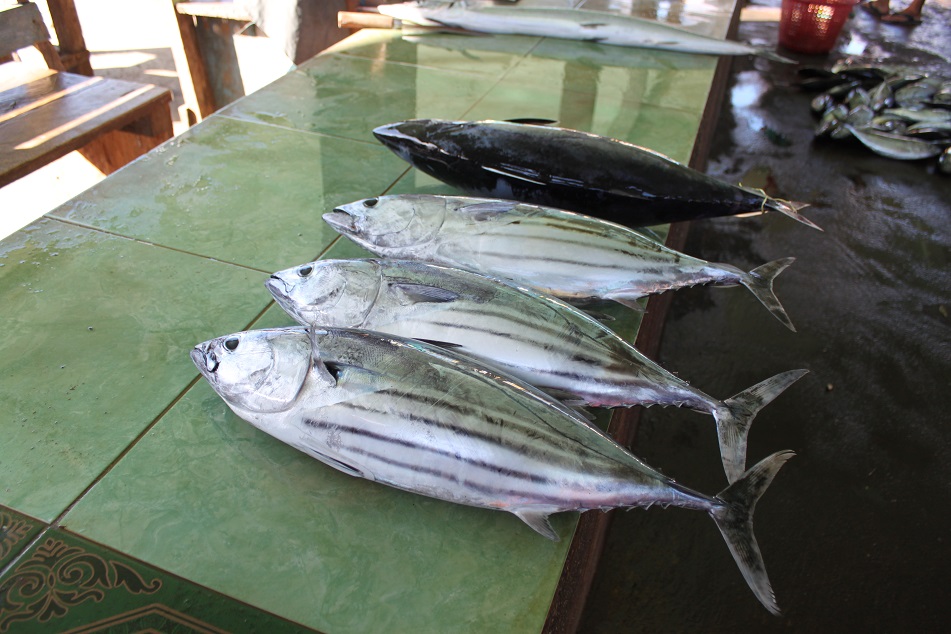 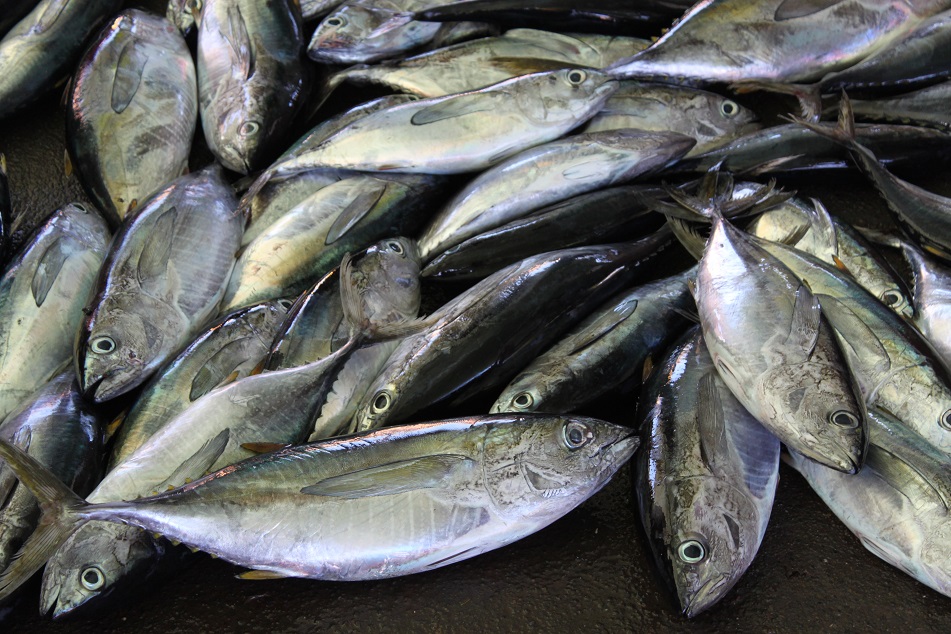 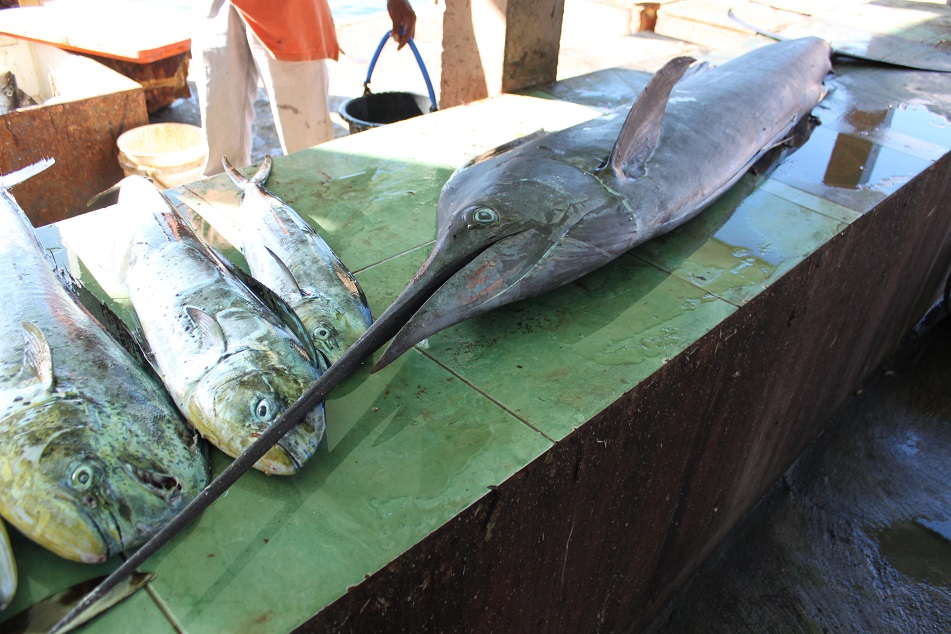 A Swordfish at the Market 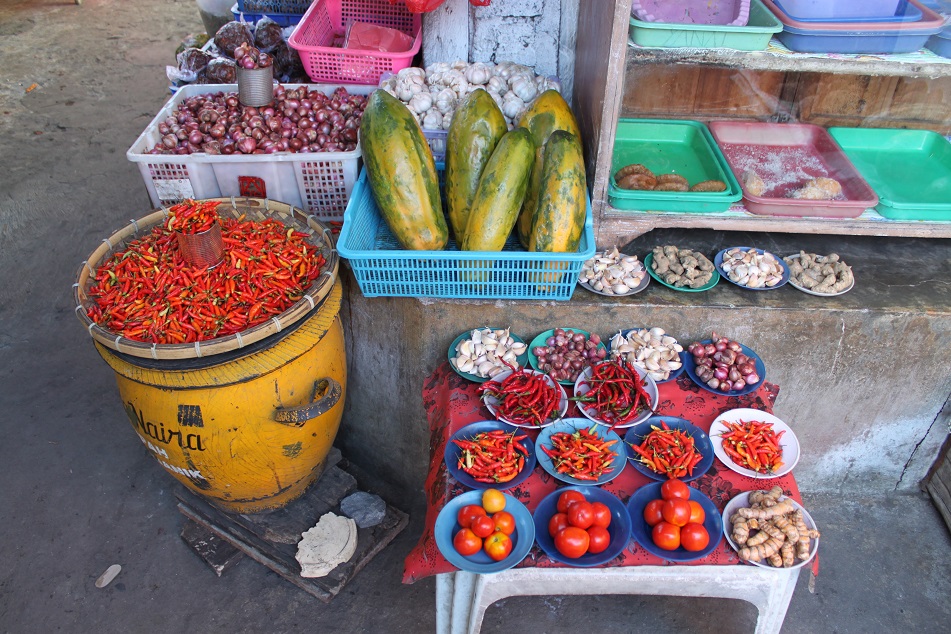 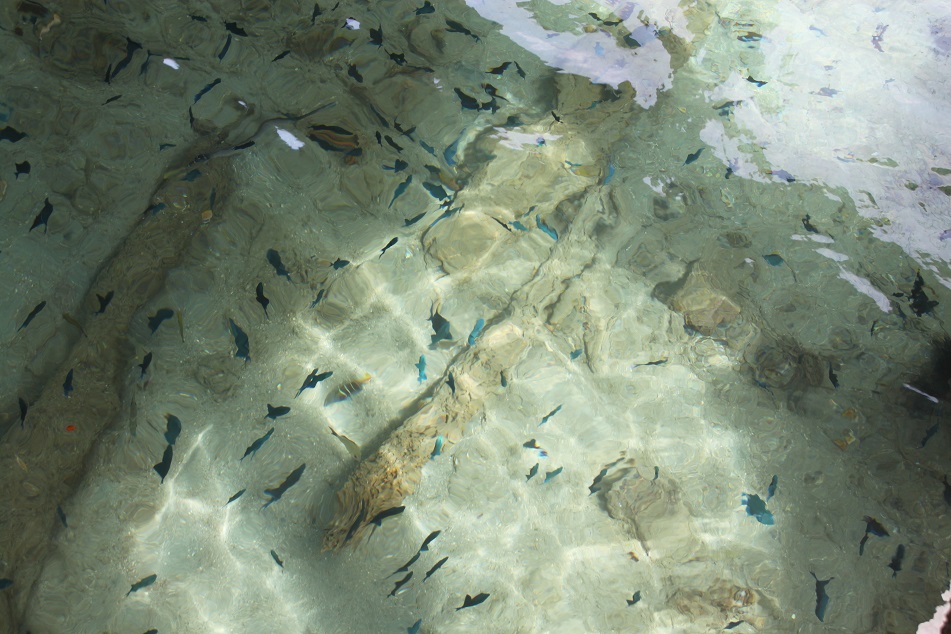 Clear Water Near the Pier of Banda Besar

Back in Banda Neira, Mount Api loomed in the background wherever we went. Its latest eruption was in 1988 which lasted for three weeks and claimed three lives. It left a path of destruction which also damaged the coral reefs on the northwestern part of the island. However, due to the Banda Islands’ location at the heart of the Coral Triangle (dubbed “Amazon of the Seas”) as well as its deep seas which brought cool water to neutralize the effect of global warming, a four-meter wide coral which would normally take 50 years to grow, only needed 15 years. In a very short period of time, the coral reefs around the volcano had recovered as shown in an Al Jazeera documentary.

Living in a country with the most volcanoes in the world, many Indonesians are accustomed to witnessing volcanic eruptions in their backyards. The volcanoes wreak havoc and take lives, but they always provide replenish the earth for new lives to flourish following each eruption. In spite of their remoteness, the Banda Islands are blessed with soil so fertile that until the 19th century they were the only places on earth where nutmeg grew.

On the island of Banda Besar, across a narrow strait from Banda Neira, nutmeg plantations abounded. Once cultivated by the local Bandanese, then owned by the Dutch during the colonial period, before being transferred back to the locals, each plantation consisted of many nutmeg and kenari (wild almond) trees – the latter grow much taller than the former and act as a canopy to prevent direct sunlight from hitting the nutmeg trees. While nutmeg is used as a spice, the locals use kenari (known in the Philippines as pili nut) in their cooking for its rich and earthy flavor. 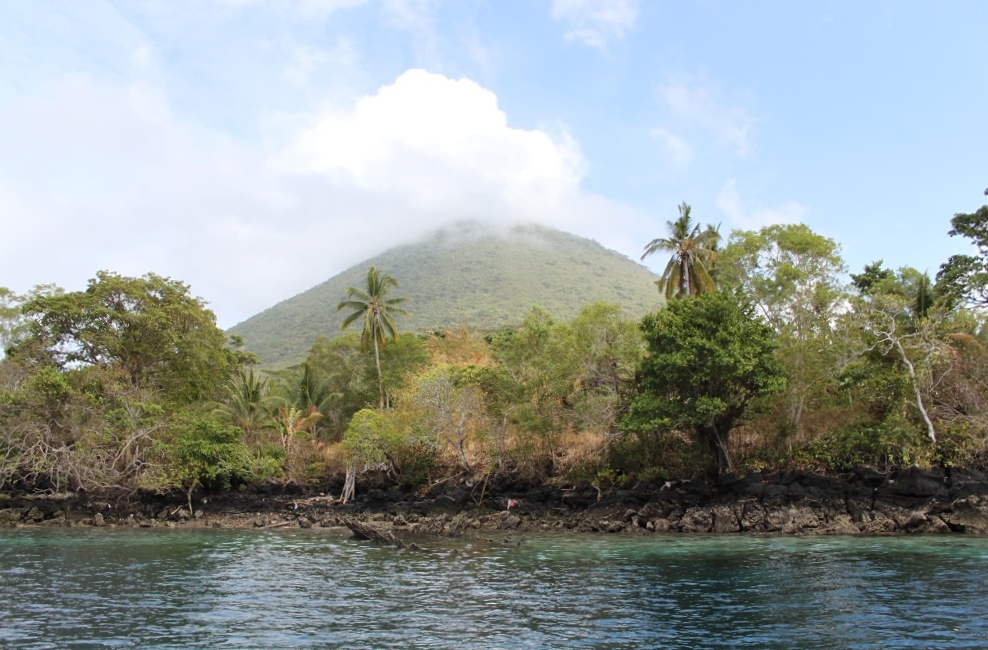 Mount Api Looming in the Background 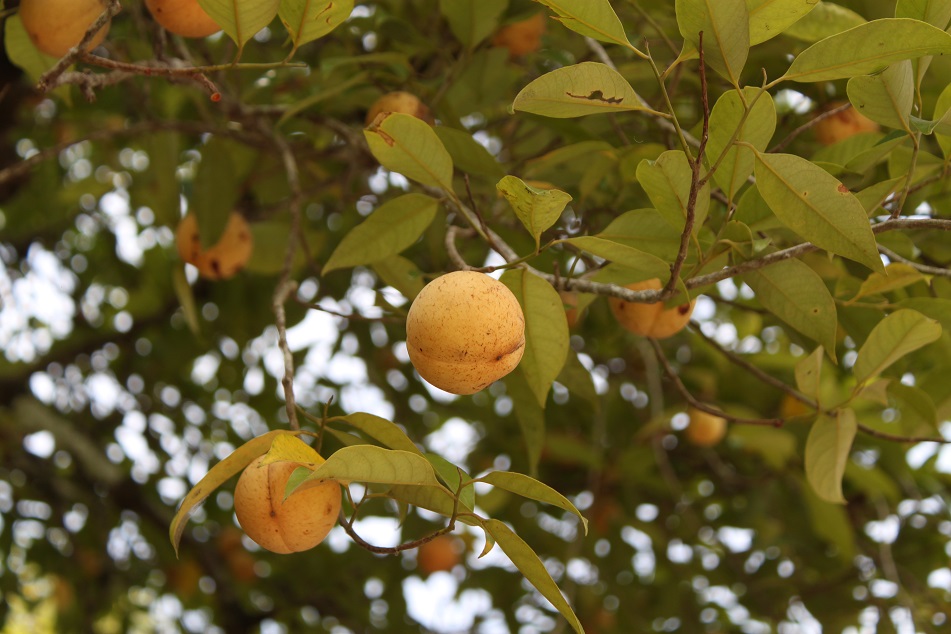 Nutmeg, Yet to be Harvested 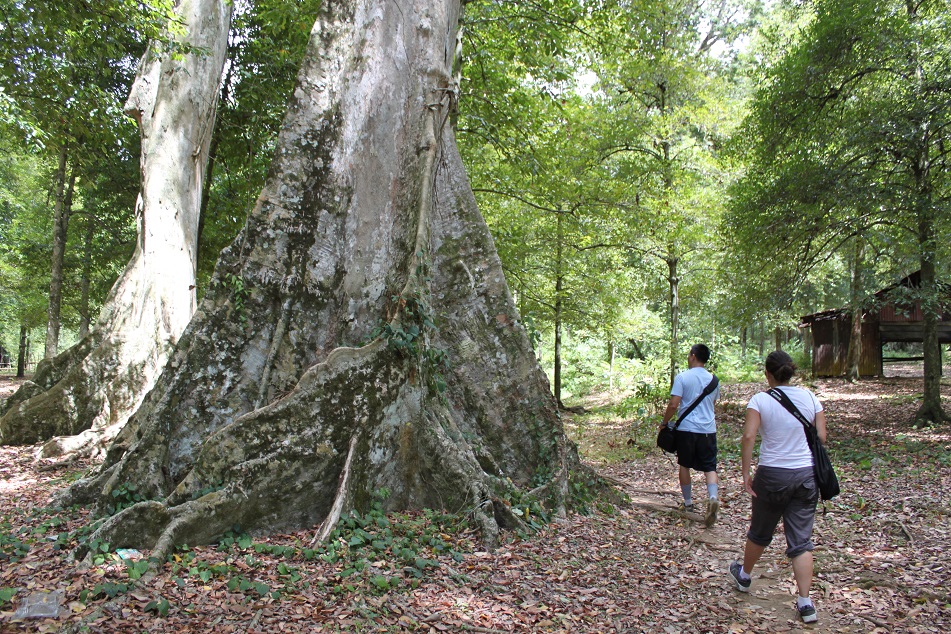 James and Fiona Walk around A Kenari (Wild Almond) Tree 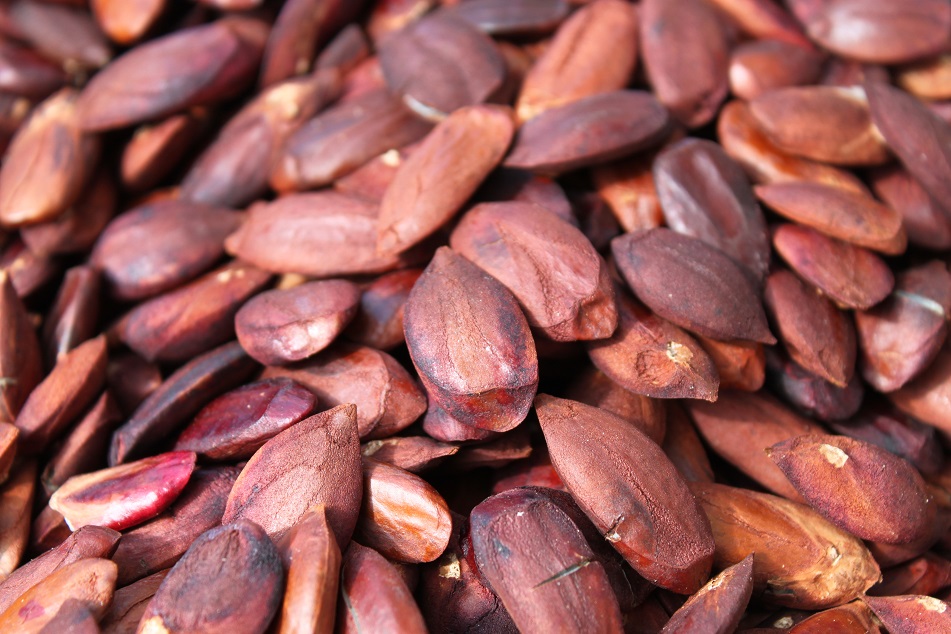 Kenari (Known in the Philippines as Pili Nut) 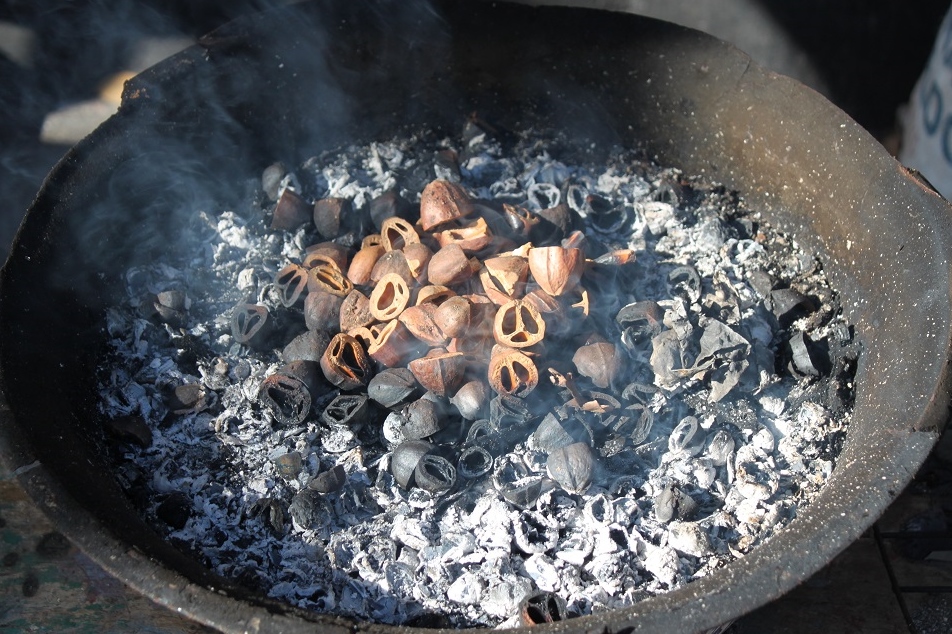 Roasted Husks of Kenari for An Aroma Enhancer 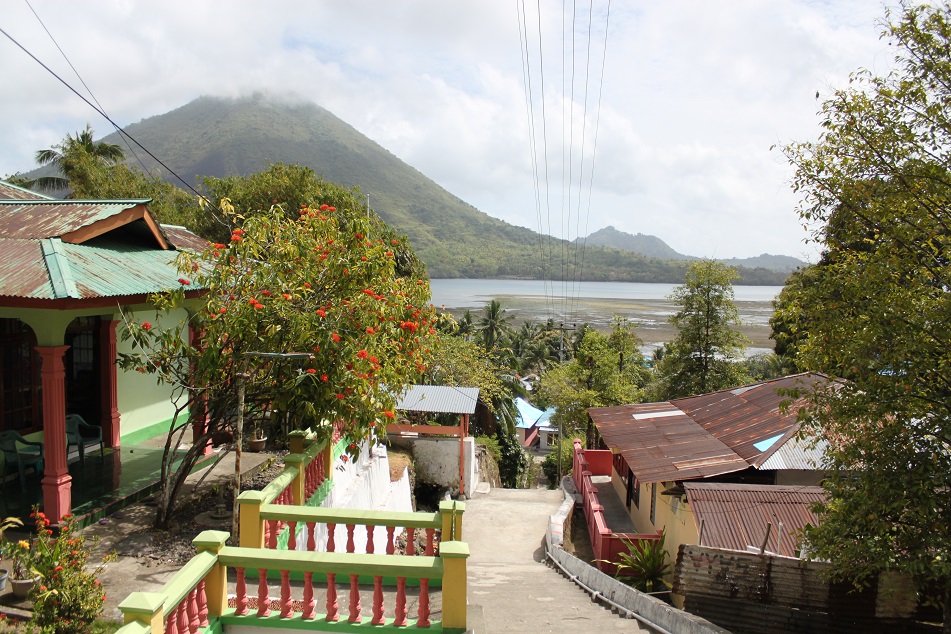 A Village on Banda Besar 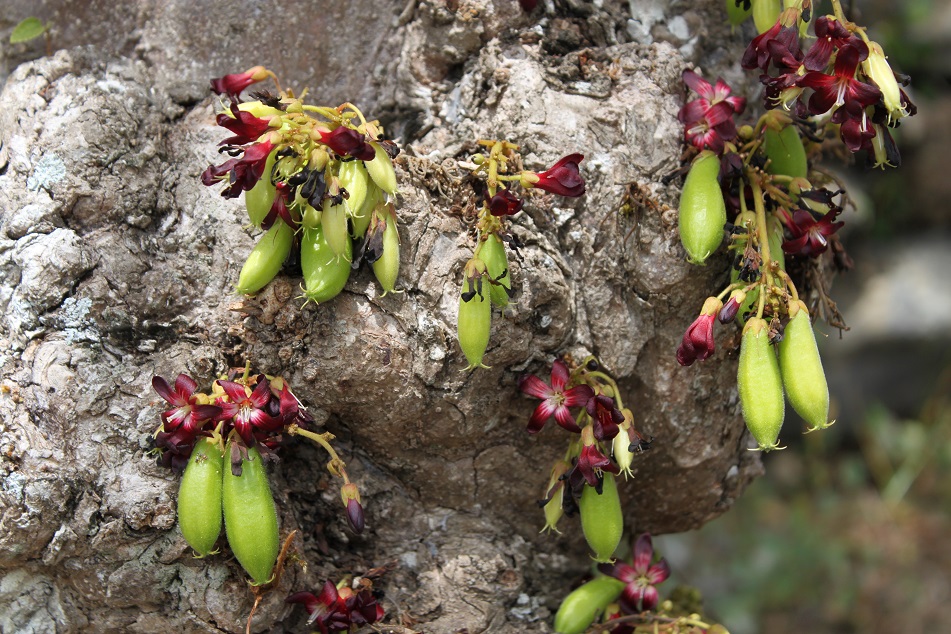 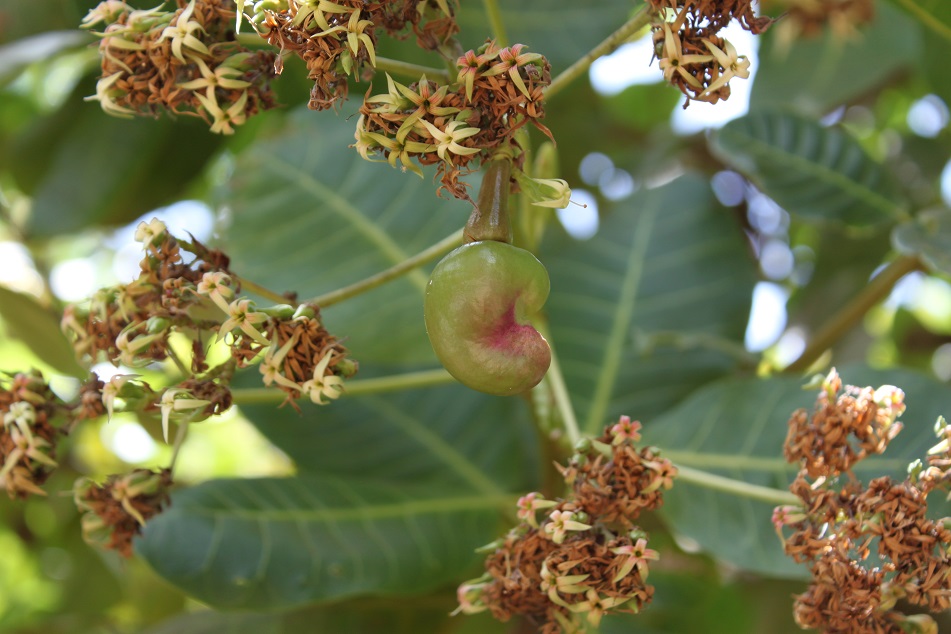 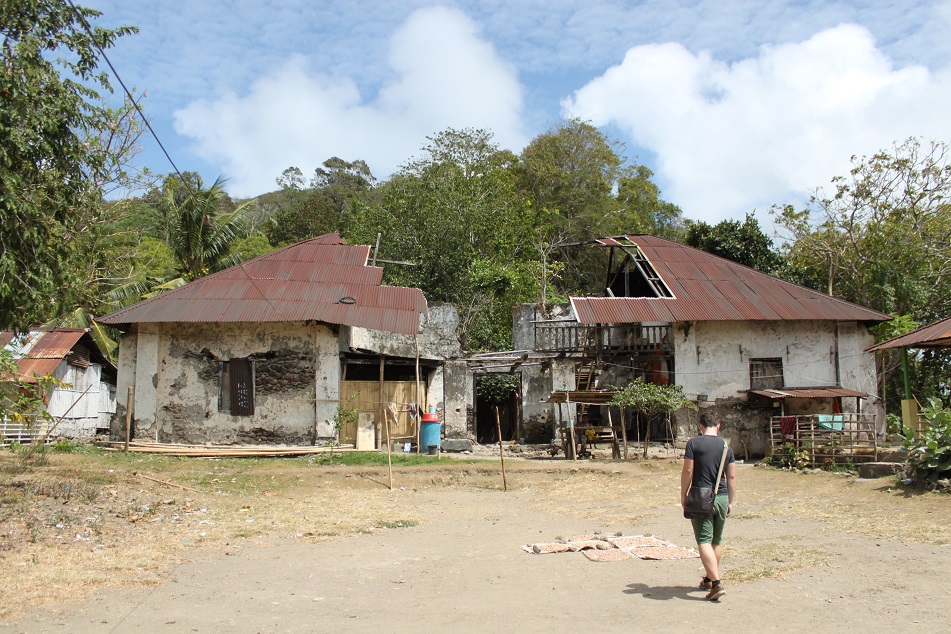 Torben and A Dilapidated Warehouse 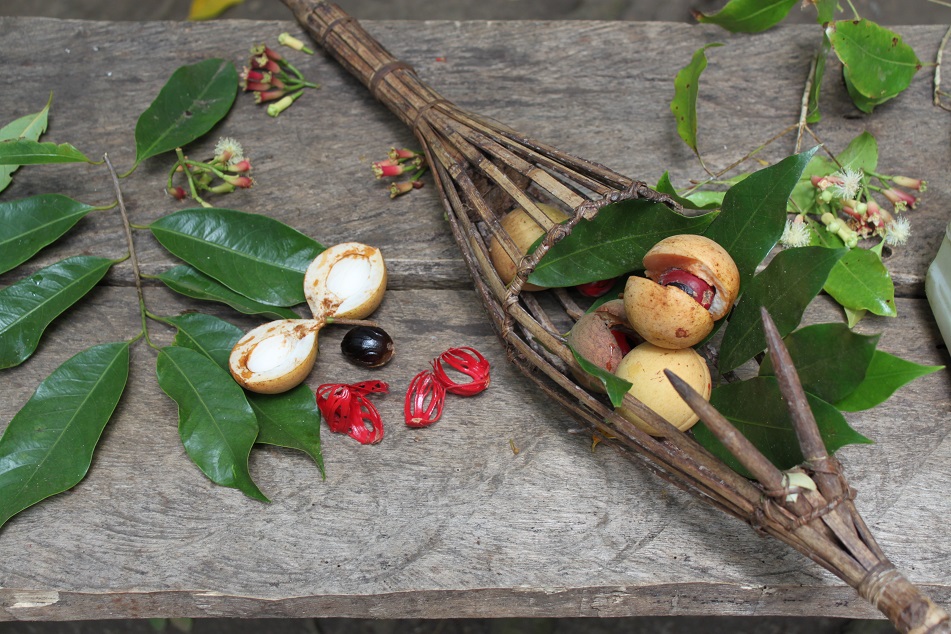 Nutmeg and Clove from the Banda Islands

From the ruins of Fort Hollandia on Banda Besar, the majestic view of Mount Api and the shallow waters between Banda Neira and Banda Besar unfolded before our eyes. With a height of only 640 m above sea level, Mount Api seemed to be a much easier climb than the 3,726-meter-high Mount Rinjani on the island of Lombok. I soon learned that I was wrong.

On our fifth day in the Banda Islands, Torben, Fiona, Eric, James and I decided to leave Banda Neira in the morning for Mount Api. The hike started relatively easy with a few steps and dirt paths to follow. Half an hour later, it became increasingly difficult, and after the first checkpoint Eric decided not to continue the hike and returned to Banda Neira instead. From there, it got harder and harder with every step we took.

Solid ground had now become loose scree where two steps up we made were followed by one step down. The higher we went, the more we had to depend on whatever roots or tree branches there were to grab. Doubt usually starts creeping into your mind in such situations, and at that point it surely did in mine. Underestimating the difficulties I might encounter, in the morning I decided to wear my normal shoes instead of the ones for hiking – making the hike even more arduous.

After seemingly endless torture, two hours later we finally reached the summit – a barren land filled with rocks and covered in clouds. Clouds, they turned out, became our biggest disappointment for they persistently blocked the view of the islands and the sea below. We waited, and waited, and waited… until suddenly there was an opening big enough for us to see Banda Neira, the eastern part of Banda Besar, and several small islands nearby. The airstrip on Banda Neira – the only one in the whole Banda Islands – jutted out into the sea, serving infrequent flights to Ambon. On the highest point at this remote part of Indonesia, Banda’s natural treasures were spread all over the islands, on land and in the sea. 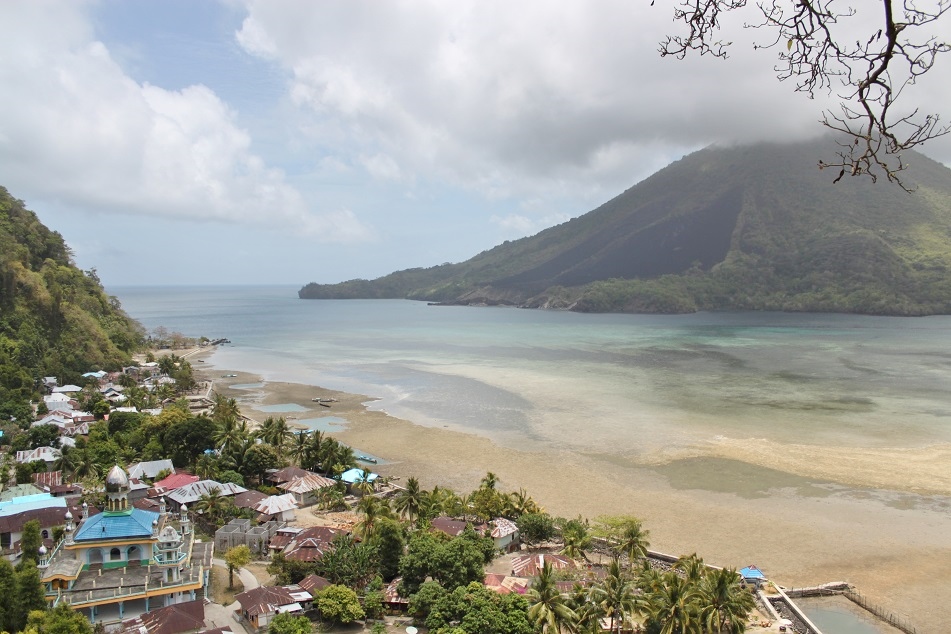 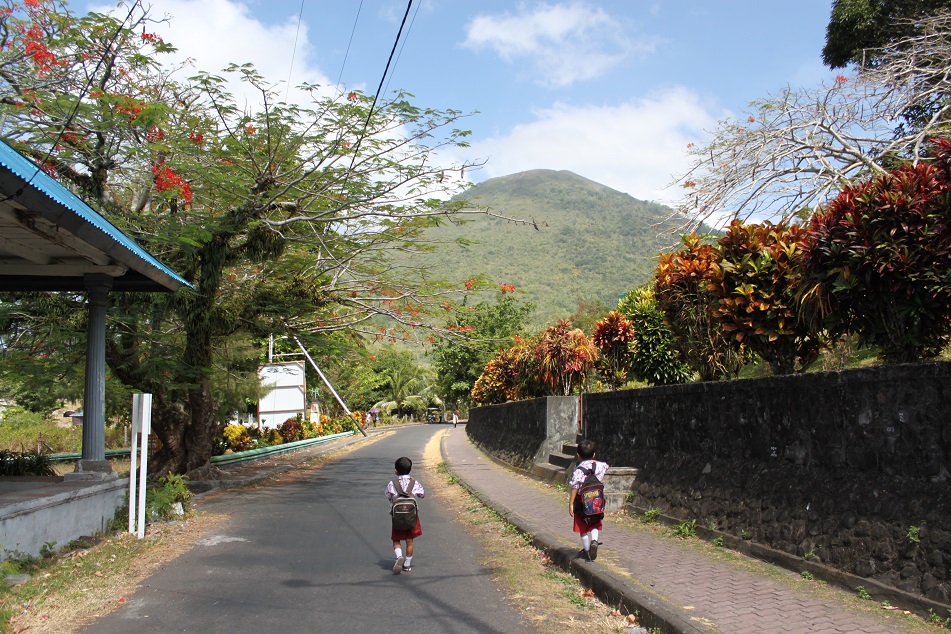 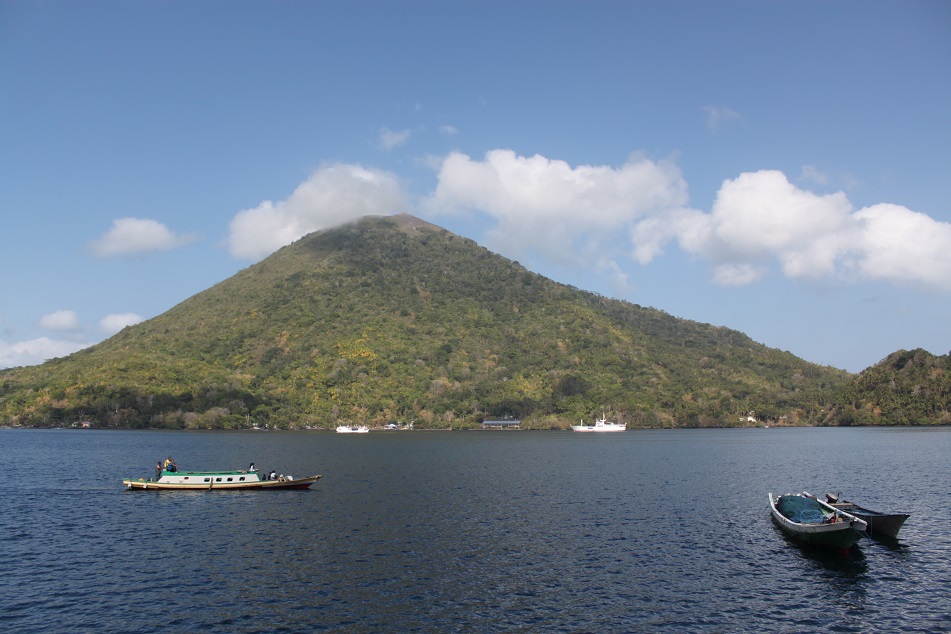 Mount Api on A Sunny Day 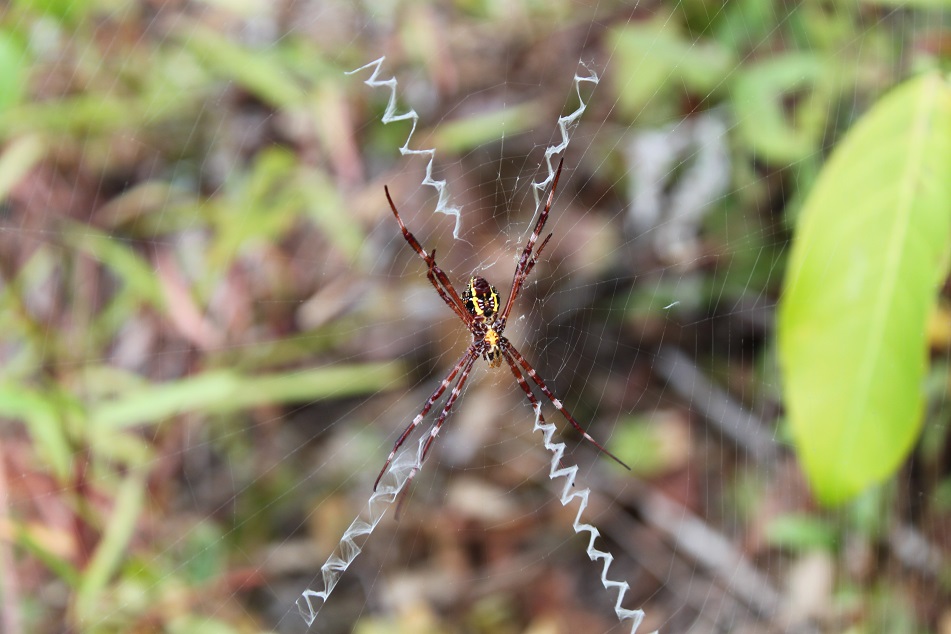 A Small Spider Spotted on the Slope of Mount Api 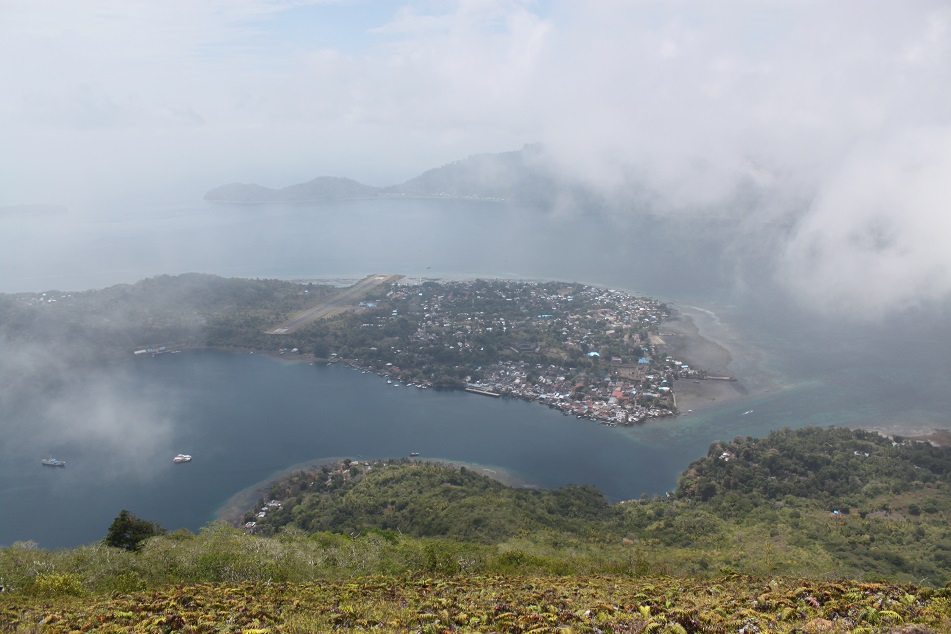 Banda Neira Viewed from the Summit of Mount Api 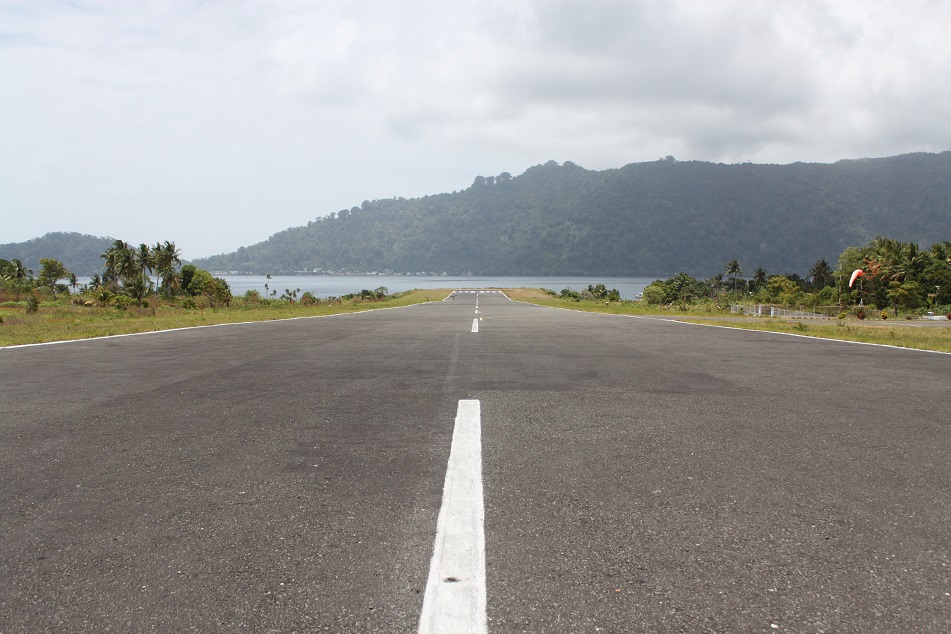 The Sole Airstrip in the Entire Banda Islands 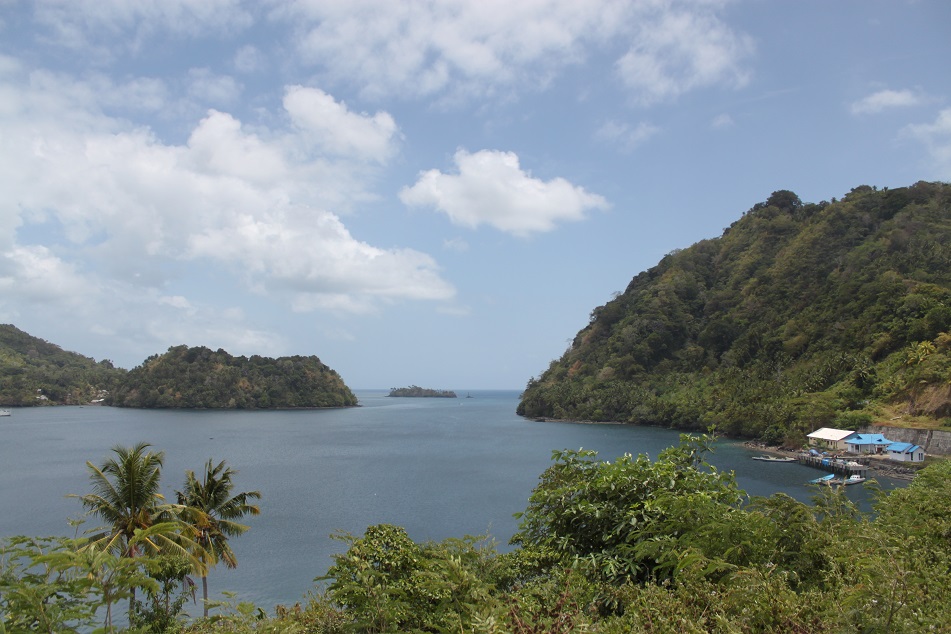 The Sea Gate to Banda Neira 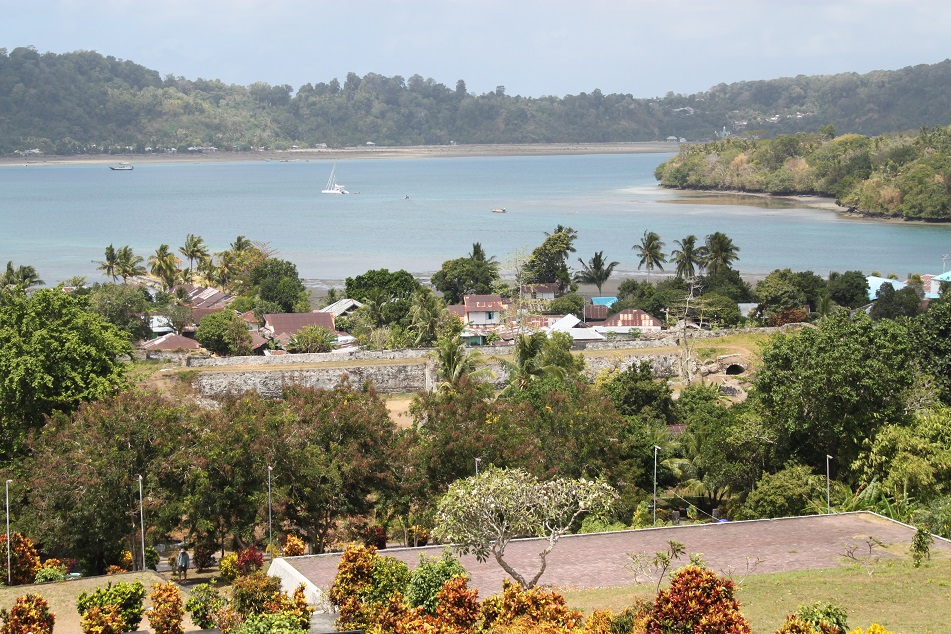 Looking Out to the Waters Surrounding Banda Neira, Banda Besar and Mount Api

38 thoughts on “The Banda Islands: Land and Sea”