In the ninth century CE, an Arabian dhow sailed from the Middle East to China, possibly bringing precious cargo from Africa, Arabia, Persia, and other places along its journey to the Far East through the Indian Ocean, the Strait of Malacca, and all the way into the South China Sea. On the way back, after setting sail from the port of Canton in southern China, the dhow, which by now had been fully loaded with tens of thousands of fine Tang-dynasty ceramics and gold items, traveled the same route to return home. However, it never made it through the Strait of Malacca as it veered off hundreds of kilometers to the south of what is now Singapore and nothing was ever heard again of the ship.*

One day in 1998, a group of fishermen started their day uneventfully. Off the coast of the Indonesian island of Belitung, they were looking for sea cucumbers which would sell at quite a high price, providing some much-needed income during the deteriorating state of Indonesia’s economy following the 1997/98 Asian financial crisis. It was a turbulent year that saw the sharp plunge of the rupiah (the national currency), the Indonesian economy shrink by 15 percent, and the fall from power of a military dictator who had ruled the country for 32 years. That day, however, the fishermen didn’t get sea cucumbers. Instead, they discovered a shipwreck. And no ordinary one too, for it turned out to be what remained of the dhow that had sailed these waters more than one thousand years ago.

News spread fast of the remarkable find, and it reached a businessman and treasure hunter named Tilman Walterfang. Through his New Zealand-based company Seabed Exploration, which formed a contract of cooperation with an Indonesian salvage company, Walterfang commenced the excavation of the site in August 1998, only three months after Indonesia swore in a new president for the first time in more than three decades. While the central government was still engulfed in chaos, it is believed that Walterfang procured the shipwreck and its cargo through dubious processes, i.e. bribing officials who were responsible for issuing the documents Seabed Exploration needed to take the artifacts out of the country.

Excavation was halted in October 1998 due to the rough seas as the rainy season had started, but in April the following year the entire process was sped up and completed. In their report to the Indonesian government, Seabed Exploration said they unearthed 47,000 artifacts, although according to a source which was quoted by an investigative magazine, the number was likely as high as 80,000. A former Seabed Exploration employee claimed that the company purposefully damaged around 20,000 items to circumvent an inspection by the government. The objects that managed to leave the country were then transported to a private facility in New Zealand to undergo conservation processes, assisted by Andreas Rettel who trained at the Römisch-Germanisches Zentralmuseum in Mainz, Germany. The artifacts were then authenticated by Professor Geng Baochang, an expert on Chinese antique ceramics.

In 2005, the conserved cargo was purchased by a Singaporean private company as well as the Singaporean government. The media reported that 63,000 items were procured by the city-state, highlighting yet another discrepancy of the total number of artifacts from the shipwreck. The commercial nature of the excavation and its short time frame (months instead of years) sparked controversy among archaeologists and anthropologists in the U.S., for the artifacts were scheduled to be displayed at an exhibition at the Smithsonian. Some argued that showing them to the general public would only promote the looting of archaeological sites, while proponents of the exhibition believed that instead of cancelling it, the Smithsonian could use the event to educate the public about the consequences of the commercialization of underwater heritage.

Today the artifacts call Singapore’s Asian Civilisations Museum (ACM) home, where some of the finest and most unique pieces are displayed at the Tang Shipwreck gallery. From a multitude of items used by the dhow’s multinational crew to various types of ceramics produced at different kiln centers in China, the impressive collection, which is described as “the richest and largest consignment of early ninth-century southern Chinese gold and ceramics ever discovered in a single hoard”, provides a glimpse into the Tang dynasty’s cosmopolitan outlook and is a testament to the long history of trade along Asia’s maritime routes.

In its official booklet, the ACM states that the government of Singapore purchased the artifacts in 2005 due to their significance in the trading history of the region, and the conservation of the Tang shipwreck and its cargo was carried out to make Singaporeans proud of the history of the island’s port – an explanation that is predictably Singaporean in its nationalistic, over-compensating tone. Next to the gallery where some of the artifacts are now displayed – some in an artistic manner – lie the Maritime Trade and Court & Company Galleries, showcasing cultural exchanges within Asia as well as among Asian nations and the rest of the world.

When I learned about this shipwreck, so many questions popped up in my mind. Had Tilman Walterfang’s company not excavated it, would the precious cargo have been safe considering how desperate the Indonesian people were at that time, given the collapse of the economy and high levels of inflation? Would proper excavation processes that might have taken years save a lot more artifacts, or would they actually expose the shipwreck to greater threats? Had the gold and ceramic items stayed in Indonesia, would they have been safe at the country’s under-funded museums?

This makes me think of other ancient artifacts now housed in Europe and North America which were procured in ways that might violate today’s international conventions on archaeology and cultural heritage preservation. Those rare items had been transported far away from where they were found due to wars that ravaged their native lands, or colonialism, or looting. Keeping them at museums in developed countries ensures their safety and preservation, proponents say. But on the other hand, displaying them permanently far from home will disconnect people from their history, their roots, and their identity.

Debates over the right thing to do when handling an archaeological site will gradually result in further improvements in excavation methods. But maybe, just maybe, when time is not on our side, speed can do more good than harm. It still might save more than it would damage. But through the advancement of technology, maybe one day this would no longer be an issue when proper excavation can be carried out both quickly and safely. And I surely hope that day comes sooner than we think.

Some of the artifacts found in the shipwreck 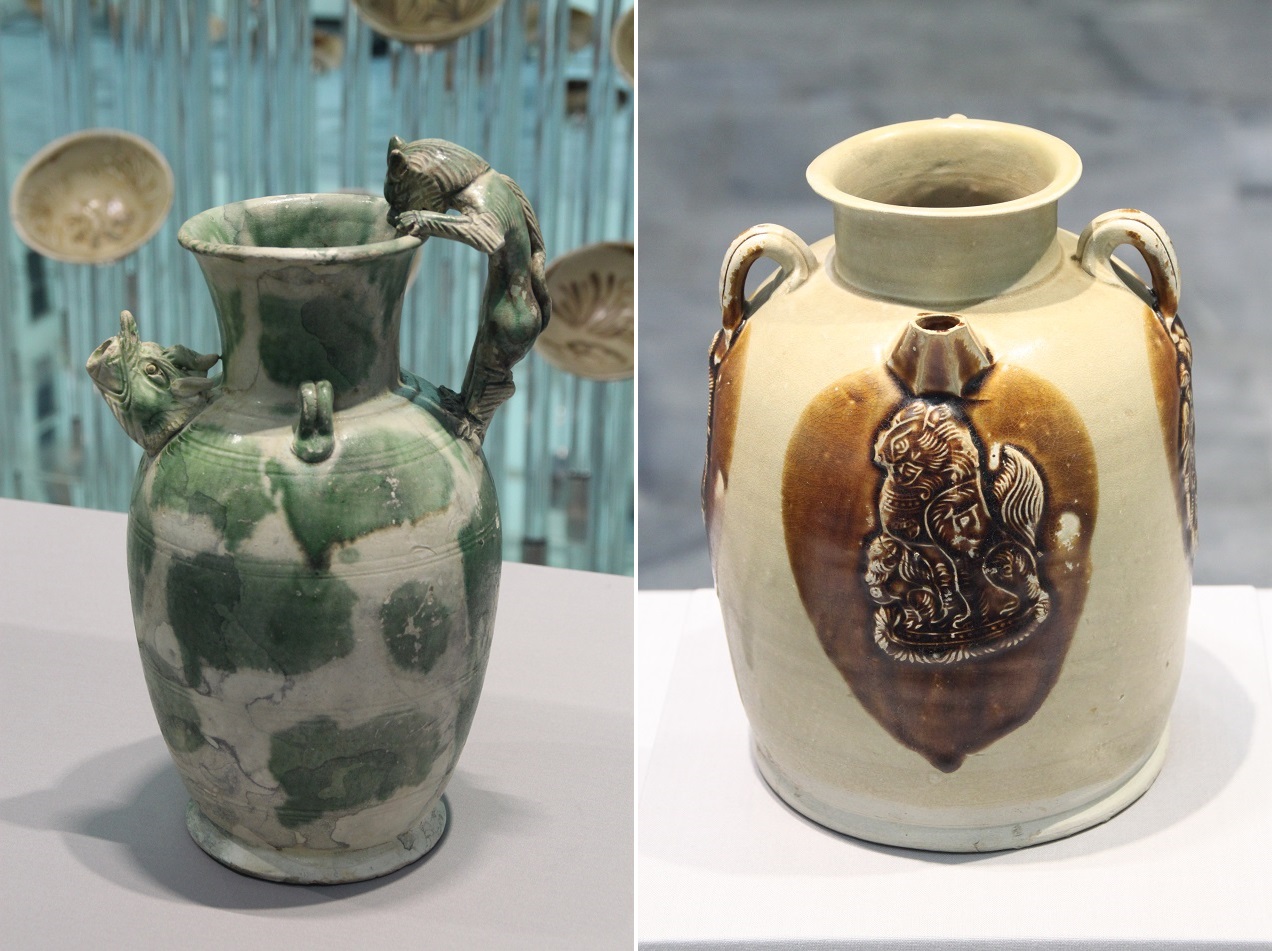 From the kiln, to the bottom of the sea, and now to the museum

Stem cup with a duck, made in the ninth century

Vestiges of past cultural exchanges

A Vietnamese pitcher in the Maritime Trade and Court & Company Galleries

A Japanese keg with a Dutchman sitting on a barrel 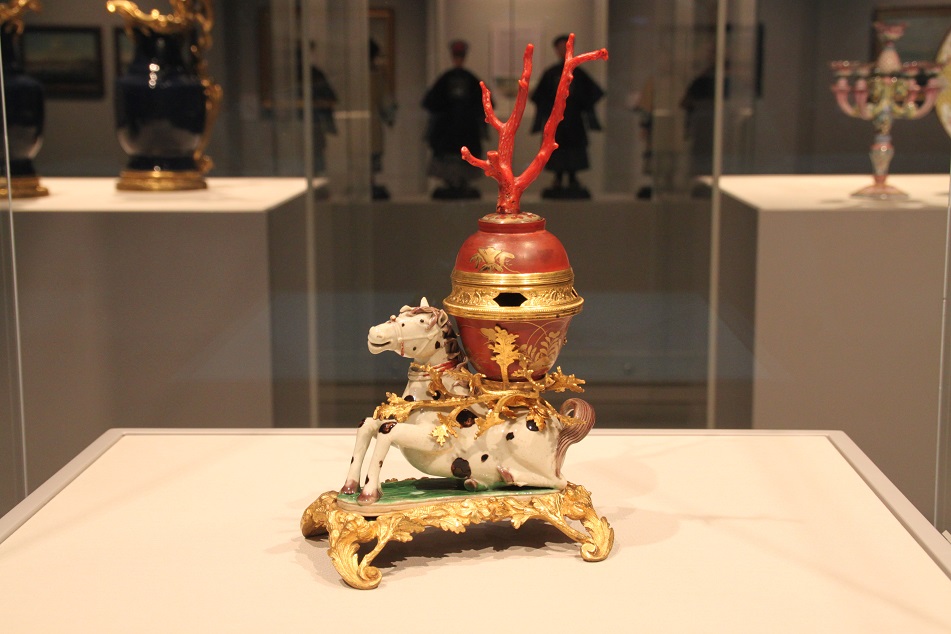 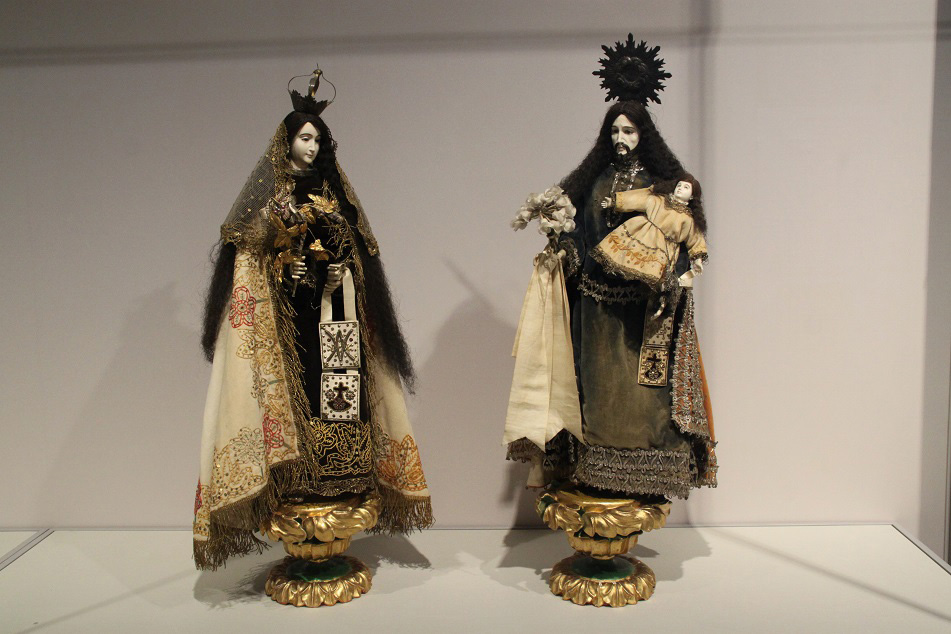 Sculptures of the Virgin Mary, Joseph, and the Christ child from the Philippines

A Chinese fan made from lacquer, wood, and silk

*the dhow might actually have been on its way to ports in Java where nutmeg and clove (originating from the Spice Islands of eastern Indonesia) and other spices were traded.