“What if we prefer Sydney?” James raised a question out of his slight worry that both of us would actually like Australia’s biggest city better than Melbourne, its perennial rival. A lot of people have remarked on how wonderful the latter is, and numerous indices on the quality of life always put the Victorian capital ahead of Sydney. However, our four-day stay in the capital of New South Wales proved just how beautiful and impressive the city was, and on top of that we also tried some very interesting high-quality dishes and witnessed how love was in abundance under the Sydney skies. What if we ended up missing Sydney when we were in Melbourne? Neither of us were eager to find the answer to that question.

One clear Tuesday afternoon, we arrived in Melbourne, only to be confronted by a stark difference between the two cities as soon as we left the airport’s arrival hall. In Sydney, double-decker trains whisk people from Kingsford Smith Airport to the city center and beyond, and we quickly took one to get to our hotel, which allowed us to make the most of our first day exploring the city. In Melbourne’s Tullamarine, however, there was no train, only buses. Its distance much further away from the city center compared to Sydney’s airport was probably a reason why a rail line had not been built. Still, the ease of getting into a city often defines one’s first impression of it.

The bus took us to Southern Cross station whose modern undulating roofs seemed to float above the railways connecting the city of Melbourne to other places in Victoria. From the station we hopped aboard a train to Melbourne Central, a busy underground station located at the heart of the city’s Central Business District (CBD). Finding a way out amid the endless sea of humanity in the station and the eponymous shopping center above it was a bit overwhelming at first. But as we ascended the escalator to ground level, a red brick tower emerged underneath a massive glass dome – a clever use of a heritage building to impress first-time visitors to the city.

On the streets, old and new trams ply a number of routes in downtown Melbourne as well as to some of its suburbs. In fact, the city has the most extensive tram network in the world, and the very first line was already operational more than a century ago. Walking down Swanston Street toward our hotel, an eclectic combination of architectural styles dominated the skyline where old buildings stood sandwiched between glass skyscrapers and imaginative, at times bizarre, art installations adorning otherwise drab structures were the norm. Inside one high-rise building, a glass-enclosed climbing wall drew those who wanted to work their muscles without having to withstand the relatively cold temperatures outside. On top of another edifice, neon green “clouds” enveloped the top of the structure, looking like they had been made by Ghostbusters’ Slimer. With that sensory overload, I wasn’t sure how I should feel about the city for the first few hours. 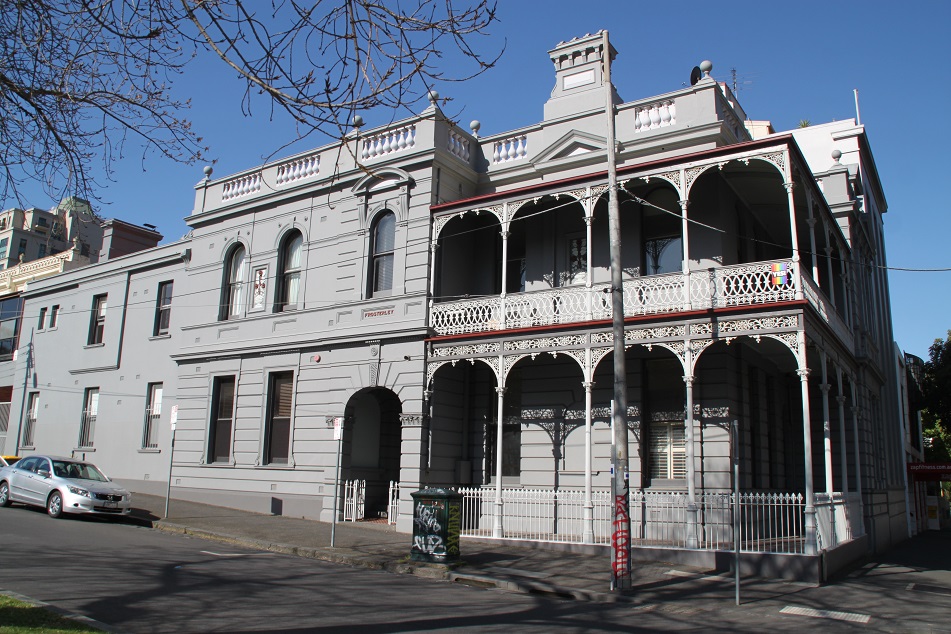 A Typical Terraced House in Melbourne 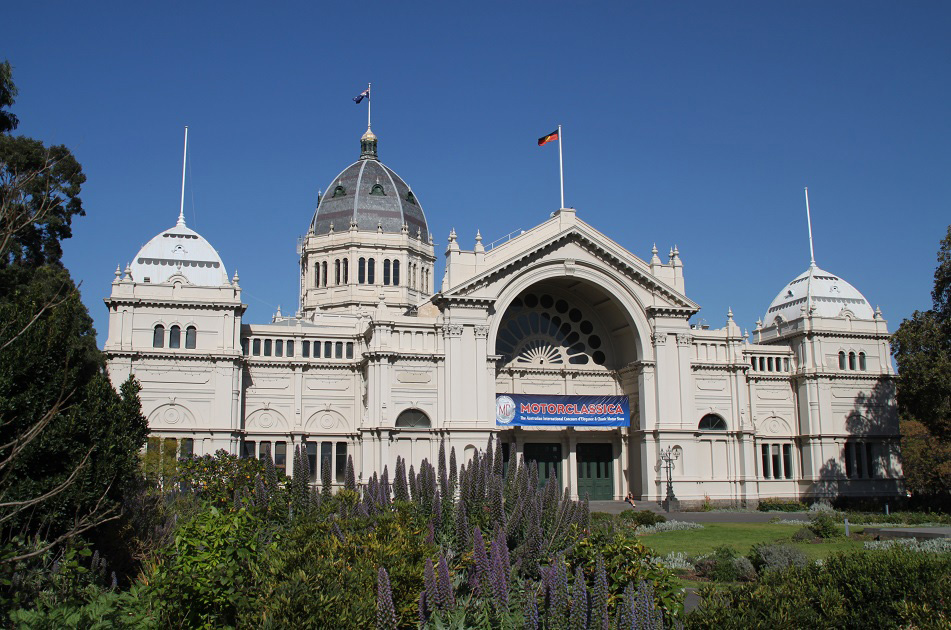 The Eclectic Building and Carlton Gardens, which surrounds it, are Now A UNESCO World Heritage Site 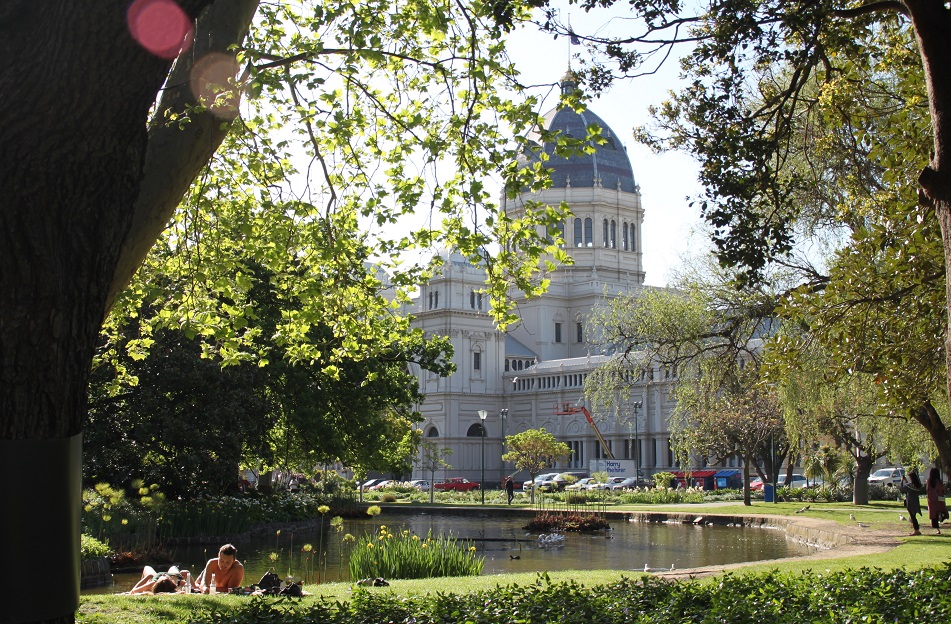 A Sunny Morning at Carlton Gardens

One of the City’s Lungs 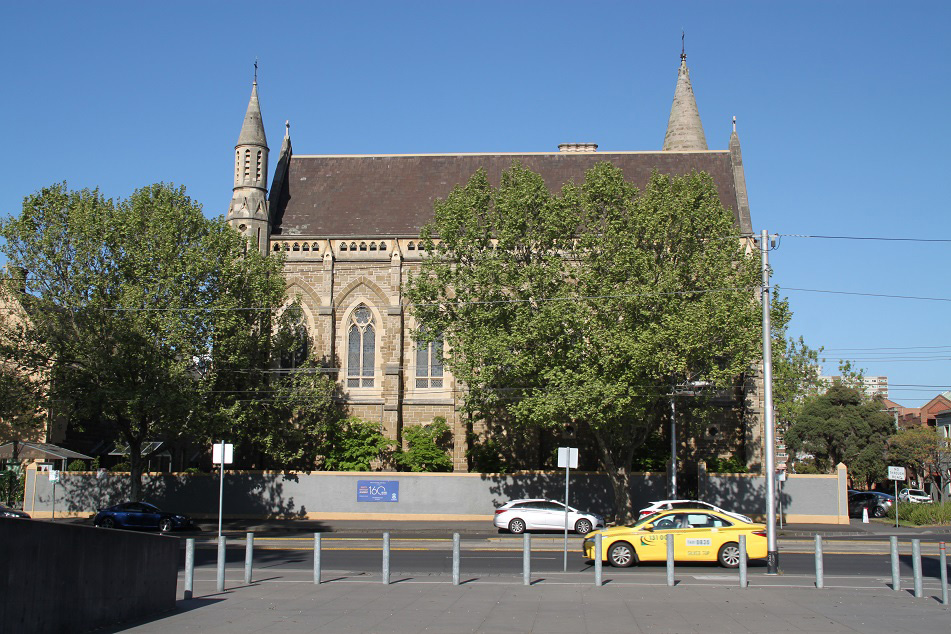 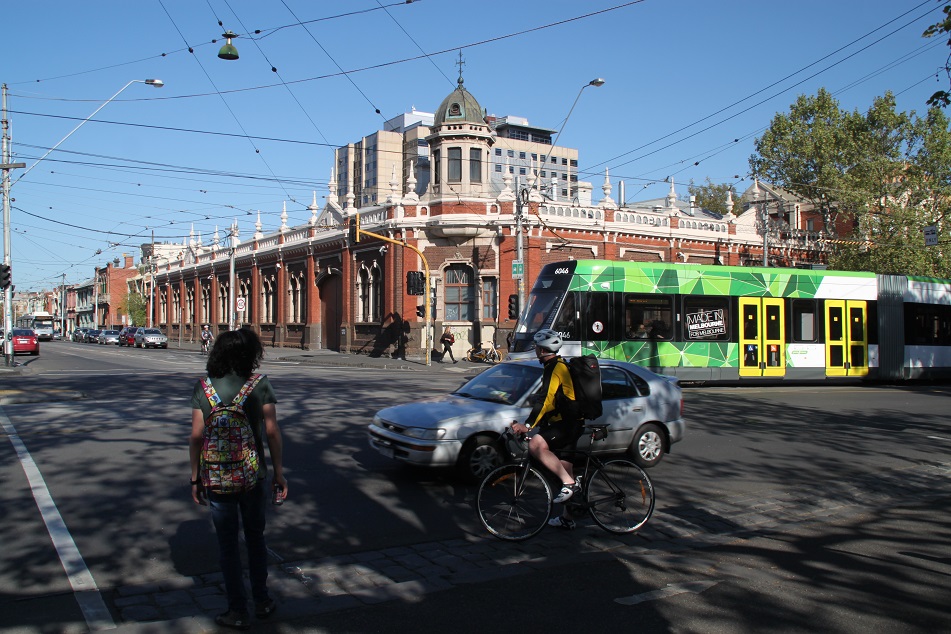 Enjoy the City On Foot, By Bike, By Car, or By Tram 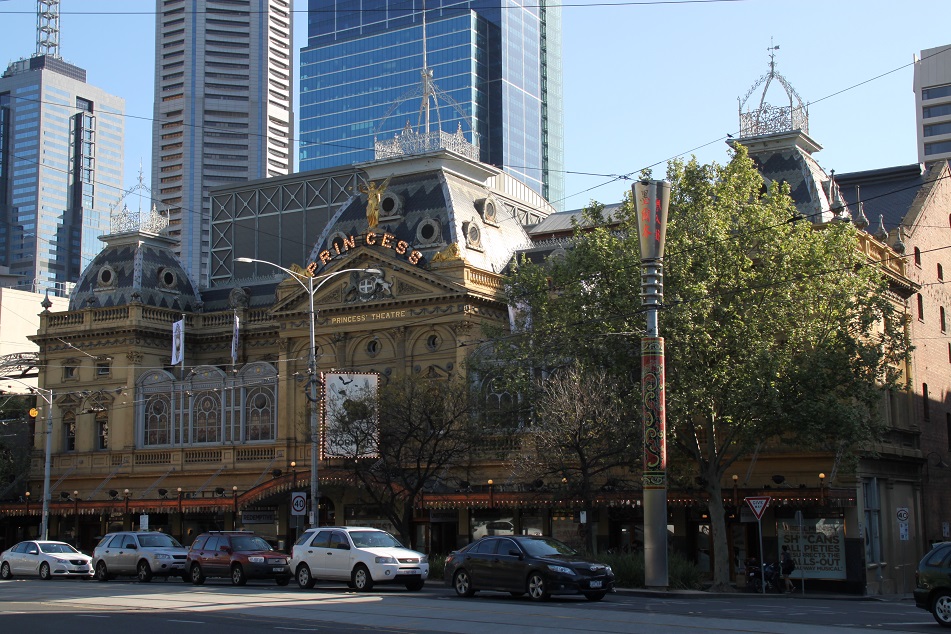 To understand more about the history of Melbourne and Australia, the city’s museums were among the places we made sure to visit during our stay. Just a few blocks away from our hotel was the Melbourne Museum, a highly educational and thought-provoking place to learn about how Melbourne was founded, the rocky relations between White Australians and the Aboriginal peoples, the city’s development into a modern urban agglomeration, the cultures of the Pacific nations, as well as dinosaur skeletons – which we had to skip. The museum is in fact Australia’s largest, and one visit is definitely not enough to see all of its fascinating collections, each displayed in a very appealing and engaging way accompanied by intriguing and eye-opening stories.

Directly south to the modern museum was an eclectic late 19th-century building erected to host the eighth world’s fair in 1880 – the first time it took place in the southern hemisphere. Eight years later the Royal Exhibition Building was the venue of another major event: the Melbourne Centennial Exhibition, celebrating a century of European settlement in Australia. But perhaps the most important episode in the building’s history occurred in 1901 when the first Parliament of Australia was opened underneath the edifice’s lofty roofs. Melbourne was indeed the heart of the Australian federalist movement which culminated in the establishment of the Commonwealth of Australia on the very first day of 1901, uniting Victoria, New South Wales, Queensland, Tasmania, Western Australia, and South Australia (of which the Northern Territory was still part). Fiji and New Zealand originally planned to join the federation but opted to remain as separate colonies instead.

Naturally, Melbourne became the capital of the new federation, albeit temporarily as New South Wales pushed for a new federal capital that would be neither of the two arch-rivals: Melbourne and Sydney. After its inauguration at the Royal Exhibition Building in 1901, the federal parliament moved to the Neoclassical Parliament House in Melbourne – which previously served as the the seat of the Parliament of Victoria – convening there until 1927 when it had to relocate to Canberra, the newly chosen Australian capital.

Across the city on Flinders Street, and overlooking the railway tracks by the Yarra River, was another great museum. Highlighting the struggles and aspirations of the city’s immigrant communities, the Immigration Museum is an important institution to remind people today about how institutionalized racism had torn families apart, how despite our cultural differences we share more things in common than we might think, and how the Greek, Lebanese, Chinese, Vietnamese, and other communities managed to thrive in the city against all odds. 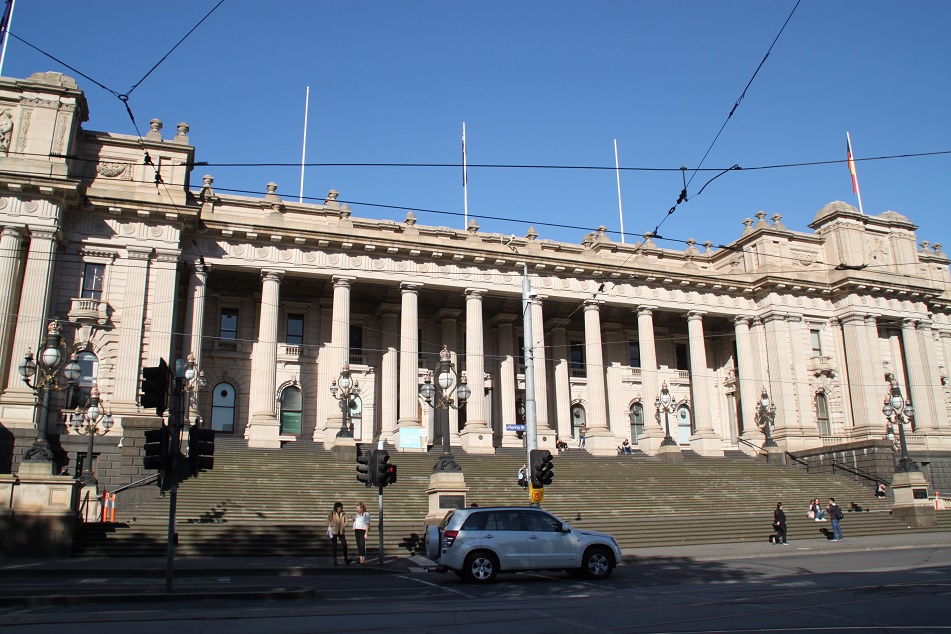 Locals and Tourists Alike at the Square

How About A Bollywood Movie on A Tuesday Afternoon?

Basking in the Spring Sun

One Fine Afternoon by the Yarra River

Rowing toward Melbourne Cricket Ground, the Largest Stadium in Australia

A City of Avid Rowers 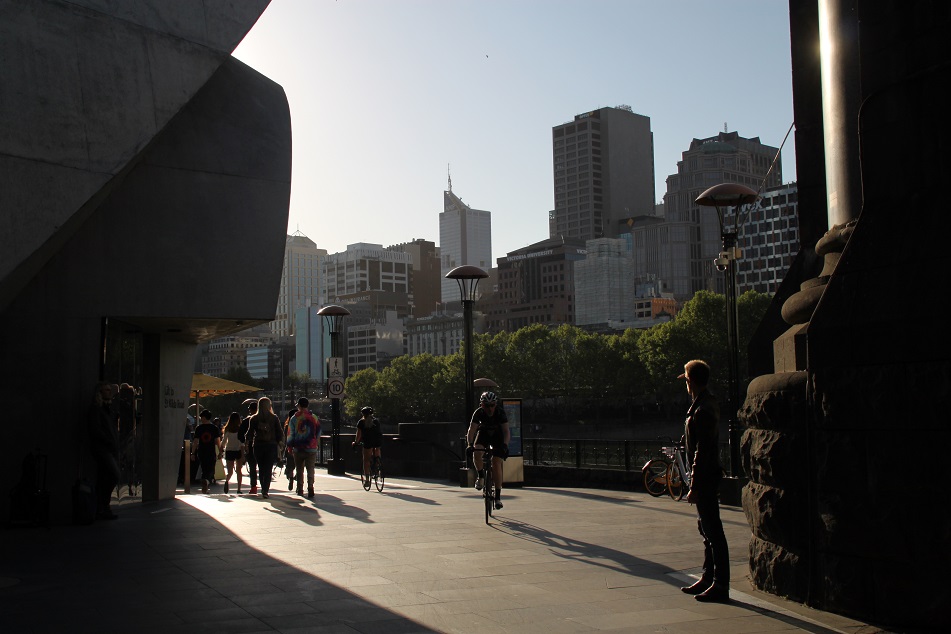 Cycling toward the Sun 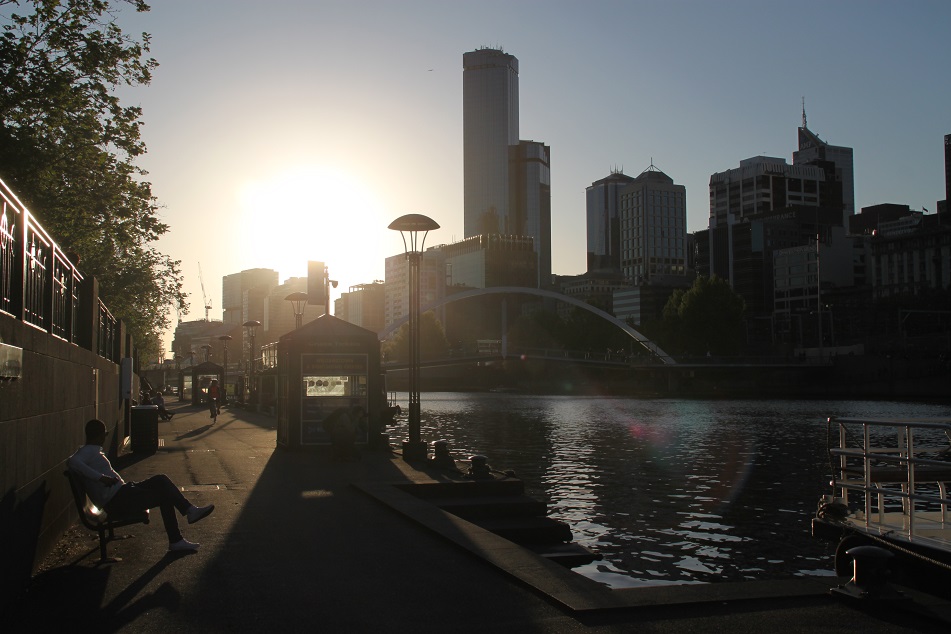 Waiting for the Lights to Turn On

To see how immigration has enriched Melbourne, there is no evidence more telling than its diverse food scene. Finding succulent gyros (Greek grilled lamb), a delectable Lebanese rice pilaff, or mouth-watering Ethiopian dishes in the city today is hardly a difficult thing to do. Melbourne’s trams work efficiently transporting residents and visitors alike from one corner of the city to another, from one restaurant to another. From the CBD to Brunswick Street – a low-rise neighborhood filled with interesting independent retailers and restaurants – and Elgin Street not too far from the University of Melbourne – arguably one of the city’s most diverse institutions, Melbourne’s trams are as reliable as a Swiss watch. However, I noticed that when those streetcars’ brakes worked to bring them to a halt as they approached stations all over the city, clouds of dust were dispersed from the wheels. Probably this, or pollen (as we were there in spring), or both caused my incessant sneezing during my stay in the city.

In spite of what happened to my nose, Melbourne’s reputation as one of the world’s most livable cities was on full display at every corner of the city we explored. One afternoon at the Yarra River people rowed to and fro, passing underneath the 19th-century Princes Bridge overlooked by the city’s modern skyscrapers. To the east the Melbourne Cricket Ground – the main venue for the 1956 Summer Olympics and the 2006 Commonwealth Games – marked the bend of the river. Meanwhile, along the river banks, and pretty much everywhere else in the city, the number of people cycling around was notably higher than what I had witnessed in Sydney.

The Melbourne I saw was a city where not only businesses thrived, but also one where artistic endeavors flourished and cultural offerings were abundant. Right at the southern end of the CBD was Federation Square, a multi-purpose compound built in Deconstructivist architectural style whose name was inspired by the city’s pivotal role in the formation of the Australian federation. Among its chief tenants are some of Australia’s most important and well-known public and cultural institutions, including the Australian Centre for the Moving Image, the National Gallery of Victoria, and the Special Broadcasting Service (SBS) – a public-funded radio and television network focusing on multilingual and multicultural programming which became our preferred TV channel in the hotel.

Across the Square was St Paul’s Cathedral, an Anglican cathedral first constructed in the 1880s but only completed in the 1960s. Built using sandstone quarried from hills in southwest Victoria, its exterior exuded a warm hue, a stark contrast to Federation Square’s grey, silver, and brown facade. Equally appealing was a big poster mounted on the church’s facade. It read “Let’s Fully Welcome Refugees”, a heartwarming gesture especially in a world where compassion can sometimes seem scarce. Despite its cooler-than-Sydney temperature, warmth was indeed what I constantly felt in Melbourne. From the very (but not overly) friendly owners and staff at the restaurants James and I frequented, to the honest and thought-provoking museums, and the general attitude of the public in welcoming and embracing diversity, it’s no wonder the city has been consistently ranked as one of the best places on the entire planet to live in. A place I would certainly love to return to one day, still sneezing or not. 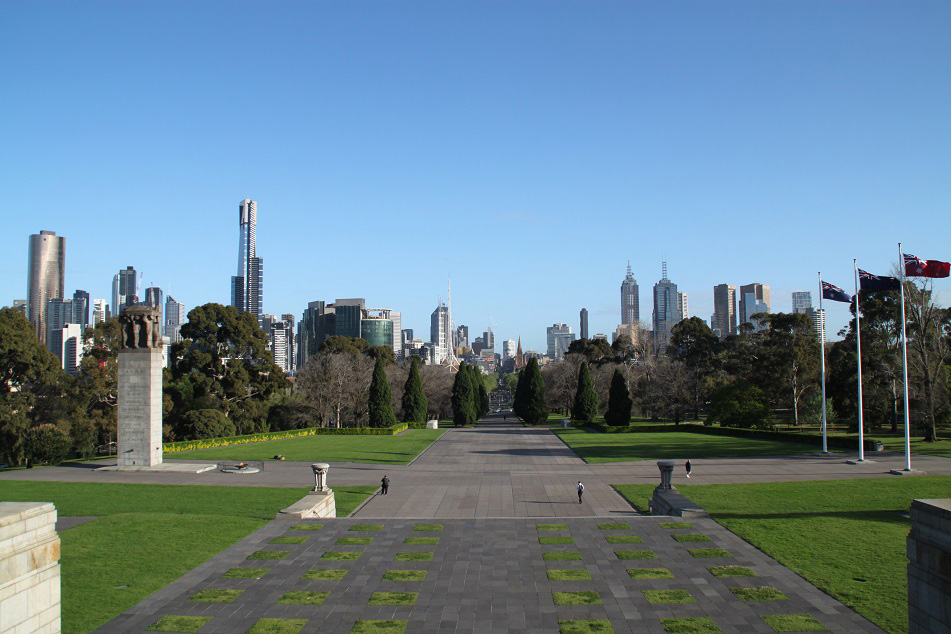 The Melbourne Skyline Viewed from the Shrine of Remembrance

Melbourne Has the Most Extensive Tram Network in the World

Old and New, Side by Side 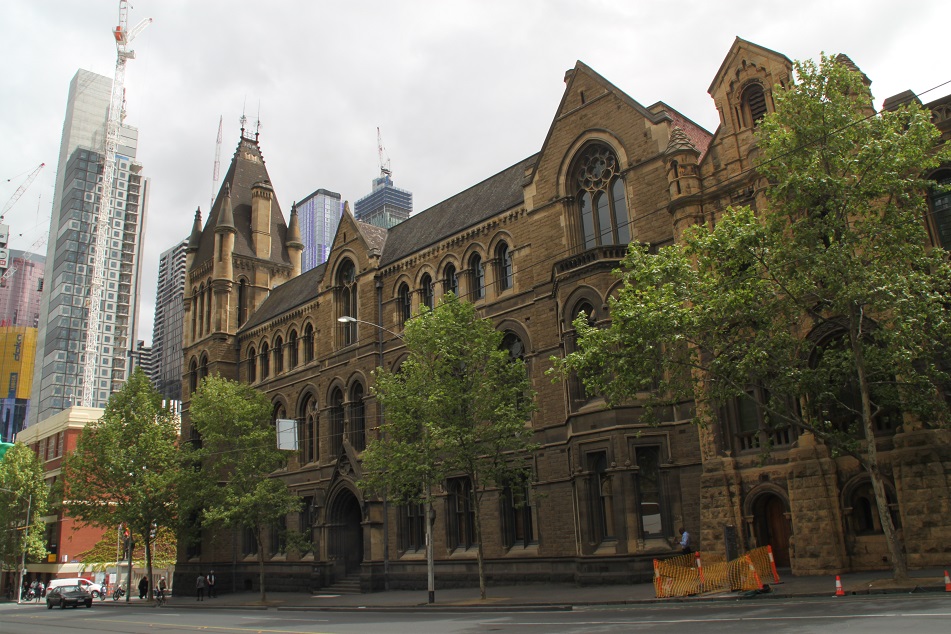 Working Out on A Chilly Day 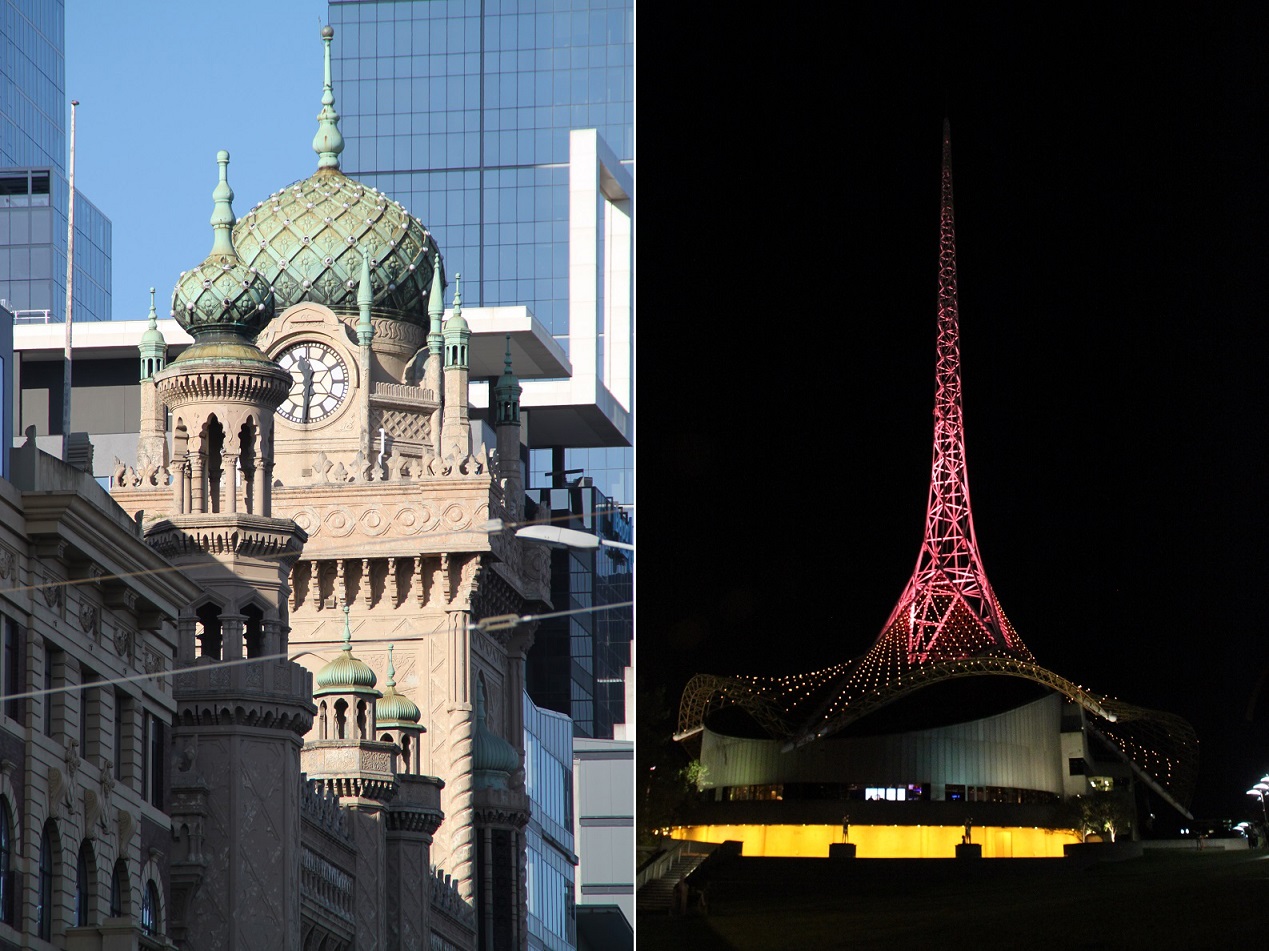 Inspired by the Past and the Future