A girl in Balinese traditional sarung for woman puts canang sari – a small basket of woven palm leaves filled with colorful petals and shredded pandan leaves – on the ground, then sprinkles holy water on it, puts some incense sticks made from the fragrant cempaka flower or cendana wood, and finally makes a circle in the air with her hand above the offering with a frangipani tucked between her fingers.

The ritual is conducted several times a day by women in front of their houses, shops, street intersections, and naturally, at puras – Balinese Hindu temples. “We also put anything from rice, noodles, biscuits or breads inside canang sari alongside with flowers, depending on what we eat on that day,” Bli Komang explains and quickly adds, “otherwise we wouldn’t sleep well at night.”

Life intertwines with spiritualism on this island of gods, dictating everything from birth to death. Reflected on their rituals and traditions, also the profusion of puras throughout the island – from mountain slopes, forests, cliffs, swamps, lakes, to villages and cities – Balinese takes their religion – an elaborate blend of Hinduism and animism – very seriously, which in turn creates a unique cultural landscape, exotic and sometimes peculiar to outsiders.

Goa Gajah was once a center for Hinduism and Buddhism teachings during the rule of Warmadewa dynasty from the 10th – 14th century AD. The kingdom – one of the mightiest in Balinese history – used it as a monastery for Hindu priests as well as Buddhist monks, indicating similar interfaith harmony as occured in Java during the height of Medang Kingdom centuries earlier.

Spanning a period of more than half a century, the excavation which started in 1923 discovered an ancient temple compound bearing Hindu and Buddhist decorative elements. “When they discovered the ruins of the temple, a group of elders asked the ‘spirits’ whether ‘they’ wanted the temple to be rebuilt or not,” Bli Komang tells me. “But ‘they’ wanted this part to remain untouched,” he continues while pointing his finger to a group of ruins.

The main section of the temple compound is a small cave whose entrance is decorated with intricate stone carvings of a demon-like creature, pressumably the guardian of the sacred cave. Three linggams – phalic stone statues – rest inside it, symbolizing the three main Hindu deities: Brahma the creator, Vishnu the preserver and Shiva the destroyer.

After long lost beneath the Earth’s surface and abandoned, today Goa Gajah once again holds an important role in local residents’ religious activities. For Balinese life revolves around old custom and religion, and Goa Gajah – or Pura Goa (Cave Temple) as locals call it – is right at the heart of the village’s spiritual universe.

The Entrance to Goa Gajah 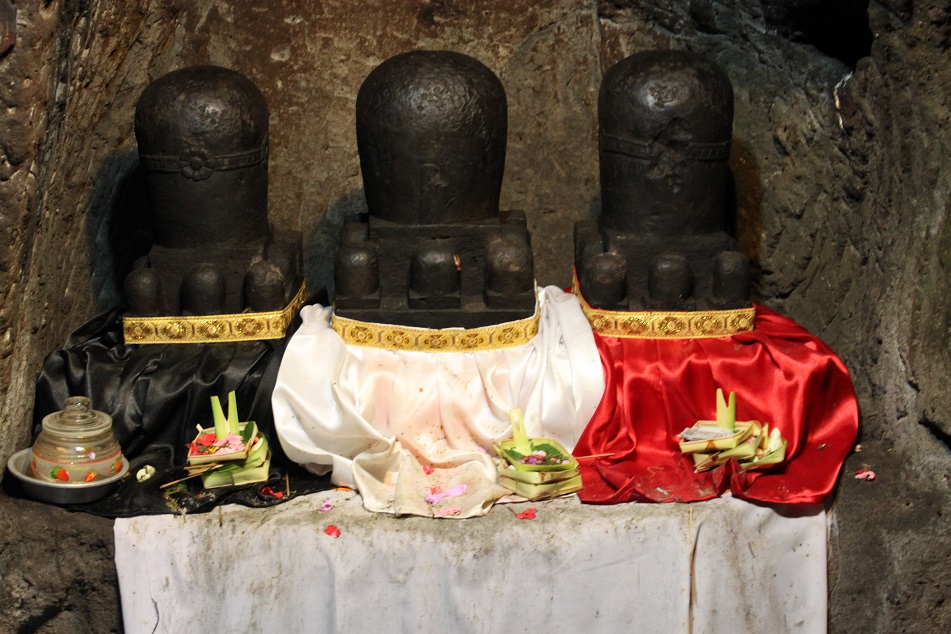 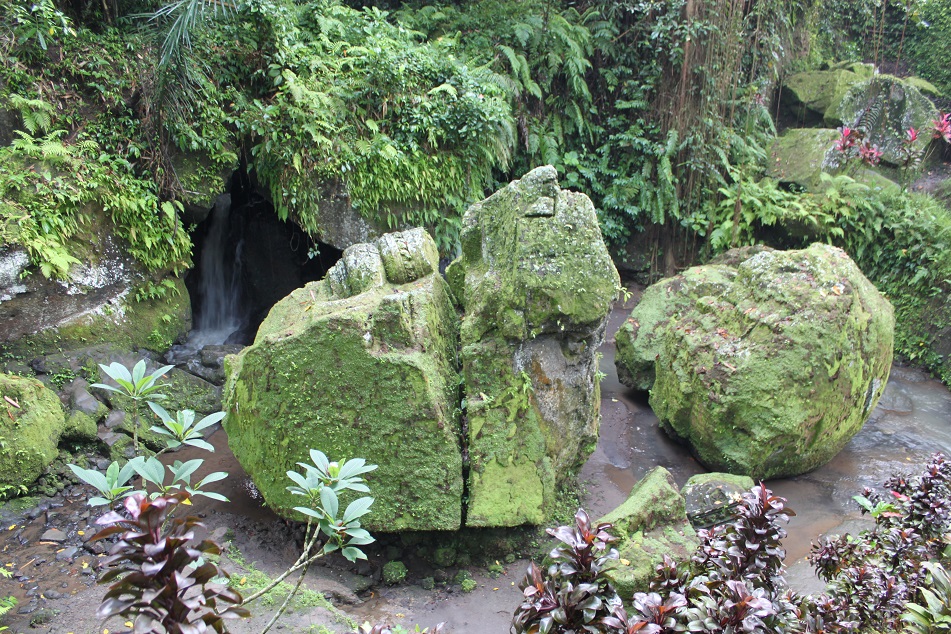 The Remains of A Buddhist Temple Near Goa Gajah

Even in a deeply religious society there were those who fell into the dark side of life. Kerta Gosa was Bali’s most respected court of tribunal in the 18th century, providing justice by resolving even the most difficult and complicated cases on the island.

Today Kerta Gosa is no longer used to try perpetrators and had been replaced by a modern court under the Indonesian civil law system. Nevertheless the jewel of its pavilions remains: painted ceilings depicting punishments in afterlife for conducting bad deeds as well as the results of karma.

Bli Komang points at one section with a man and a woman holding hands, watched by two ugly creatures. “Did you cheat on your spouse?” he translates the Balinese script on the panel, explaining about a question cheaters would be asked in the afterlife. Other panels depict harsher consequences for grave crime.

Despite no longer in use, the ceiling paintings of Kerta Gosa still act as a reminder for the locals to always perform good deeds in life, thus maintaining harmony and order in the society. 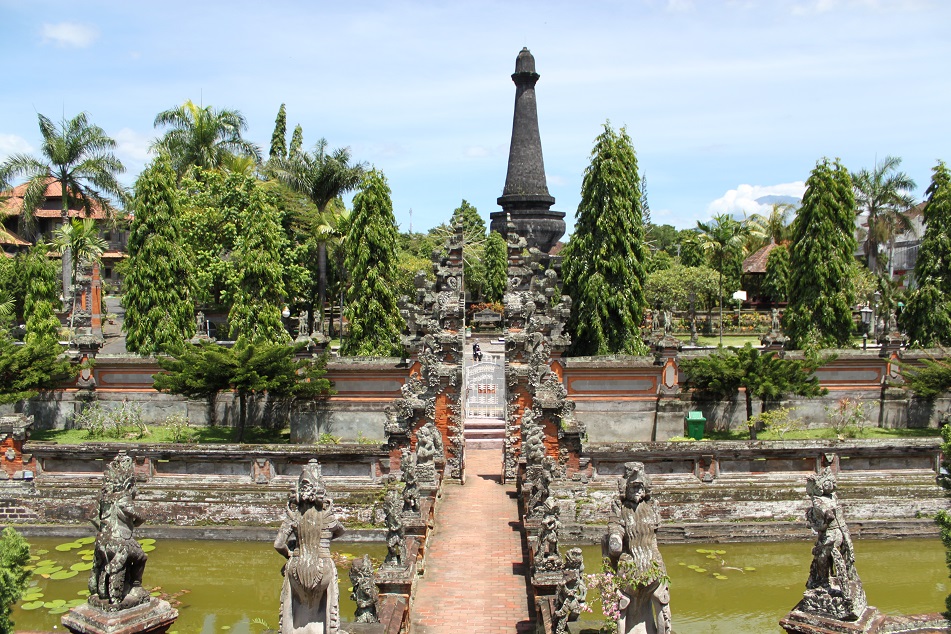 Horse-Drawn Carriage, A Vestige from the Past

The Face of Garuda 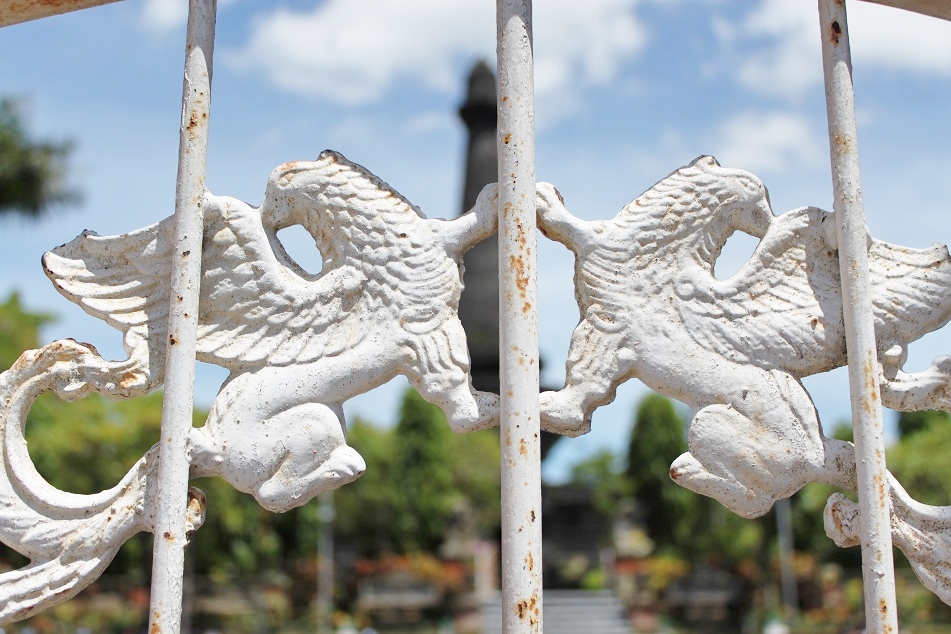 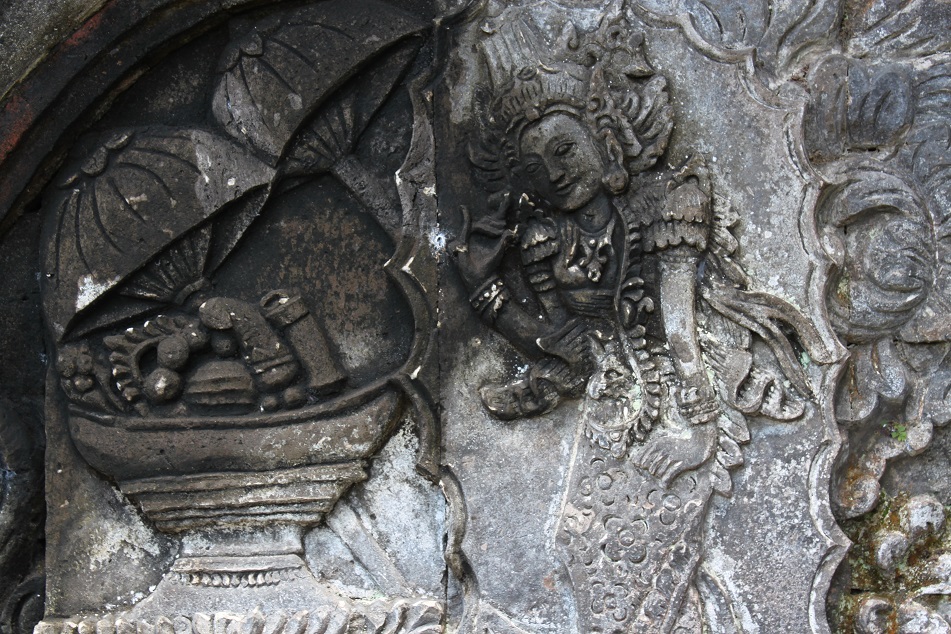 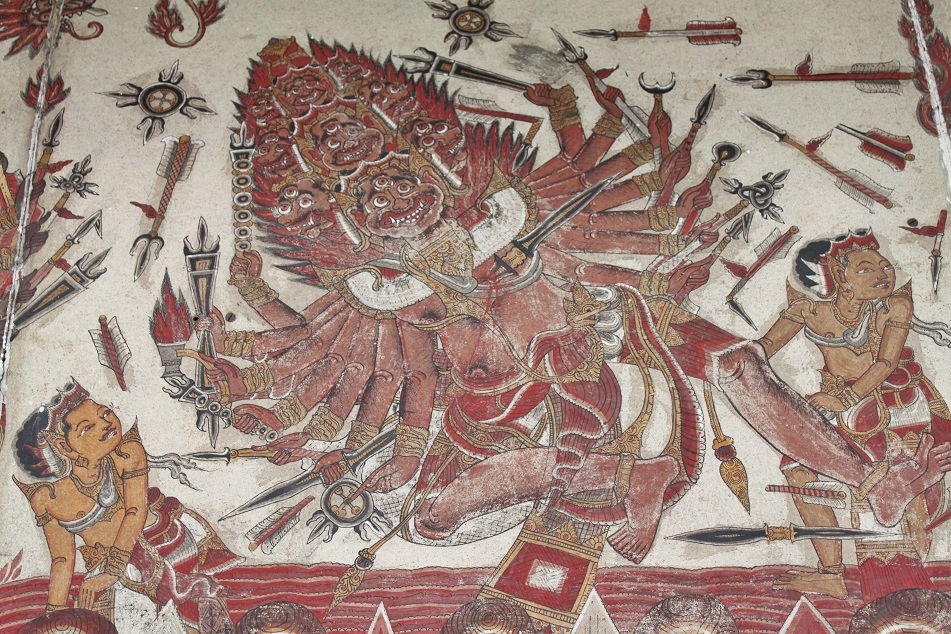 A Ceiling Panel at Kerta Gosa Depicting Vishnu with Many Arms 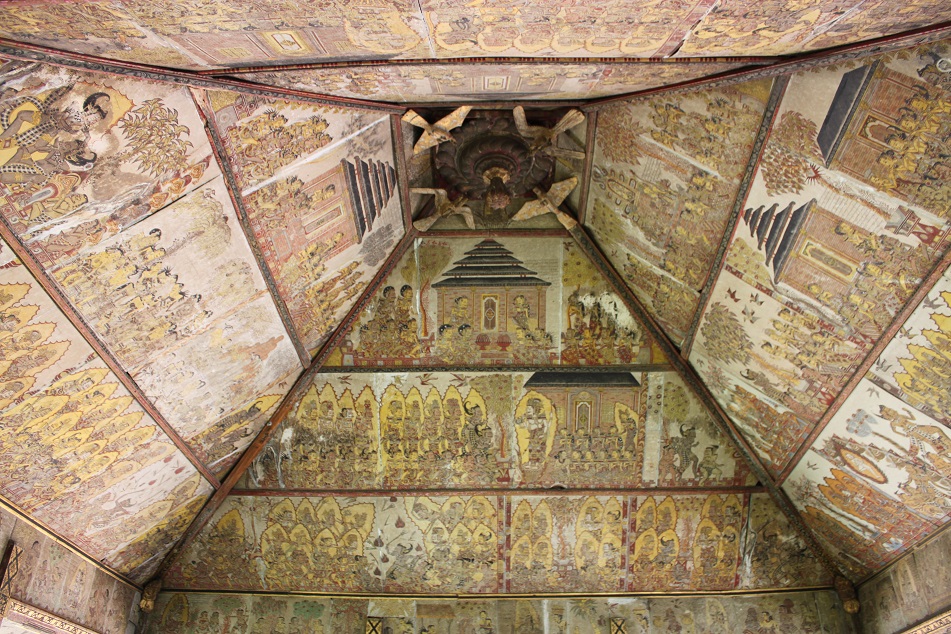 The Painted Ceiling of Kerta Gosa

Depiction of Afterlife Punishment for Cheating

Ngaben is a unique Balinese cremation ceremony where a deceased person is placed inside a coffin which is inserted inside an buffalo-looking sarcophagus. It is performed to free a person from his worldy restraint, i.e. his body, in order his purified spirit to be able to reach his final resting place. From those who belong to the lower caste of the society to those of brahmana (priests) and ksatria (kings) are subject to be cremated, only the cost of the cremation that differs the one from the other – the most expensive Ngaben was estimated to cost more than US$ 80,000.

However, contrary to the normal custom where no tomb is dedicated for a deceased person, Anak Wungsu – literally means the last son – of Warmadewa dynasty built shrines at the scenic Pakerisan Valley for honoring his parents and older brothers. Hidden amid the lush Balinese tropical forests and rice paddies, Candi Gunung Kawi stands graciously against Pakerisan River, immortalizing Anak Wungsu’s love for his family.

Flowing downstream from its source at Pura Tirta Empul, Pakerisan River cuts through the compound, dividing the rock-hewn shrines into two main parts. Exuding peace and serenity, it’s a manifestation of Balinese Hindus’ aspiration for moksha, a liberation from the cycle of death and rebirth. 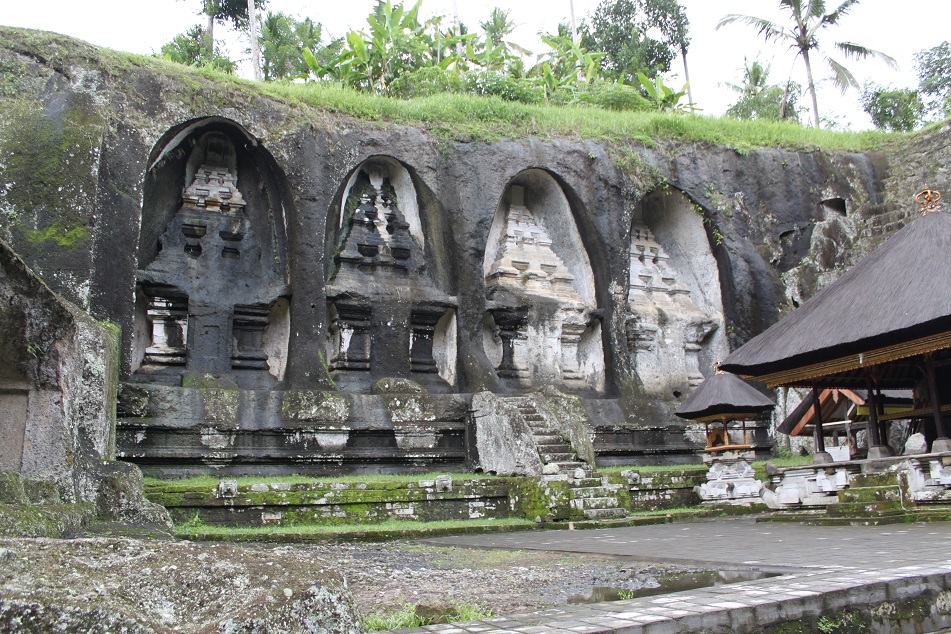 The First Group of Shrines

The Second, and Most Famous, Group of Shrines

A Pura at Candi Gunung Kawi 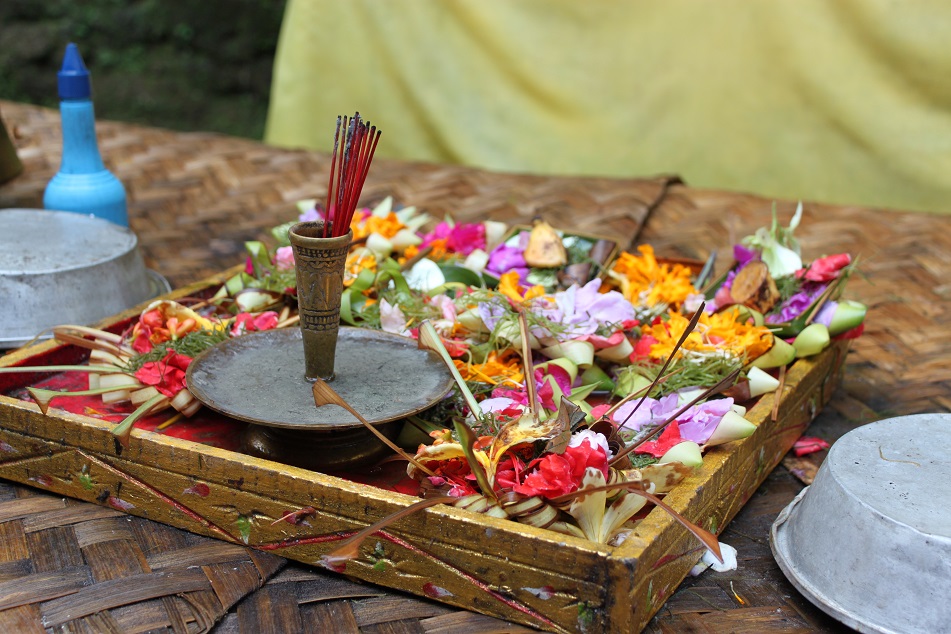 Candi Gunung Kawi Viewed from Above