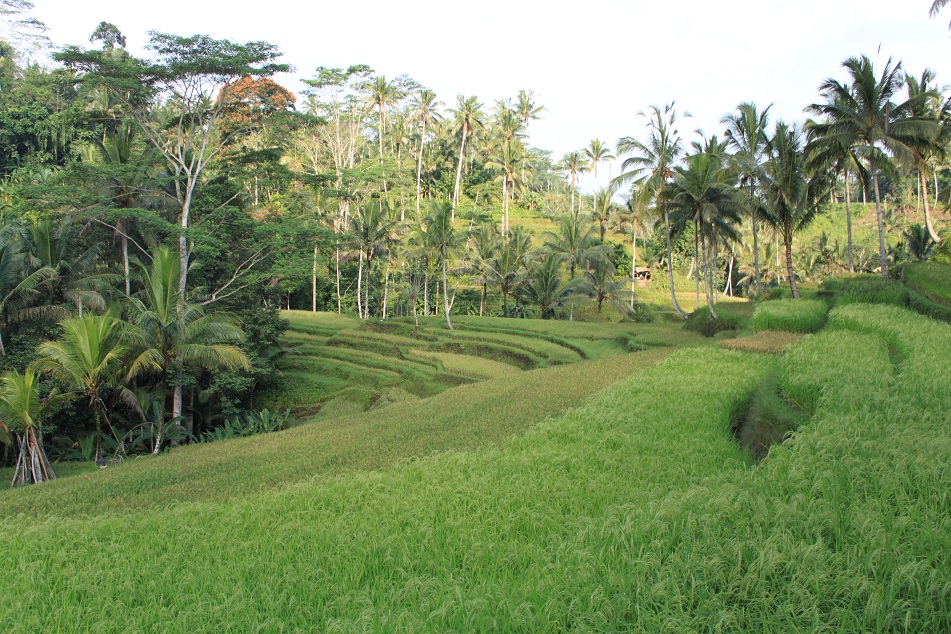 The Rice Terraces in Tampaksiring

The hot and humid air greets us as we get off the car and leave the comfort of air conditioner behind. We are in Tampaksiring, the same area that I visited in 2011 to see Pura Tirta Empul – the temple of replenishment. But this time we head to an even more ancient place, through more than 300 steps down the valley. A moment before we go down, the scenic view of Balinese rice terraces catches our attention. Alexander and I grab our cameras and stand right at the edge of a cliff to capture the beauty of the ripening rice paddies below.

Before we even go further down the steps, a rock-cut gateway welcomes us to the verdant valley, a reminiscence of the ingenuity of mankind to outsmart the nature. On the bottom of the steps, Pakerisan River flows calmly through the lush valley that inspired the ancient Balinese to build a wonderful temple in this beautiful setting. The river divides the two main sections of Candi Gunung Kawi, a temple compound at the heart of the island of gods. We walk through a small concrete bridge, connecting both sides of the river, to get to a small pura (Hindu temple) on the slope of a limestone hill. The pura is devoid of any activity or prayer, only an old priest wearing a white robe sits inside the outer courtyard, watching visitors walking in and out of the temple.

Trying to be as courteous as I can, I silently take some pictures of the small pavilions in the pura which are adorned with intricate and colorful carvings and statues. Walking further north towards the main temples, I notice a few holes in the limestone cliff which seems to be man-made. I come closer to peek inside, only to find nothing.

Passing through another gate, I am greeted by two spirit houses on my right side, overlooking the inner courtyard and guarding another rock-cut passageway to a seemingly more secluded part of the compound. After taking off my slippers which is mandatory according to the local custom, I wander inside the small labyrinth where rock-cut structures and hollowed cliff sides emanate a rather eerie yet tranquil feeling. Probably the tranquility was indeed the main reason to carve such massive limestone into chambers of meditation. Barefoot, I walk cautiously on the cold slippery stone floor covered in moss, thanks to the lush tropical rain forest above and the constantly trickling water.

However the true wonder that draws visitors to this valley is one of the main sections which consists of five carefully carved temples, facing the smaller four-temple section compound right across the river. The gigantic rock-cut temples might lack of decorative elements as most ancient temples in Java have, but it is compensated by the wonderful setting of the Pakerisan River valley which undoubtedly exudes a sense of peace and contemplation. The once inundated court in front of the five temples is now covered in moss where sporadic water spouts make the place even more damp and slippery. Not only tourists-alike, this majestic setting has also attracted film producers to make their movies here. Baraka – a 1992 widely acclaimed non-narrative documentary film – and The Fall – a 2006 adventure fantasy film – contain some scenes filmed at this place, showing a group of barechested men performing the electrifying kecak dance.

As the temples were built against a dramatic backdrop of central Bali, many might inadvertently ignore the history behind the temple compound. Built in the 11th century by the Warmadewa dynasty – ruler of the biggest kingdom ever existed in Bali – Candi Gunung Kawi not only served as a religious monument, but also a royal tomb where the ashes of King Udayana – the greatest king of the dynasty – and his son were purportedly buried. Today, the king’s name is immortalized as the name of Bali’s largest university and Candi Gunung Kawi is a stunning legacy of the finesse and craftsmanship of the greatest kingdom in the history of the island.

The Temples on the Eastern Riverbank

Entering the Courtyard of the Temple 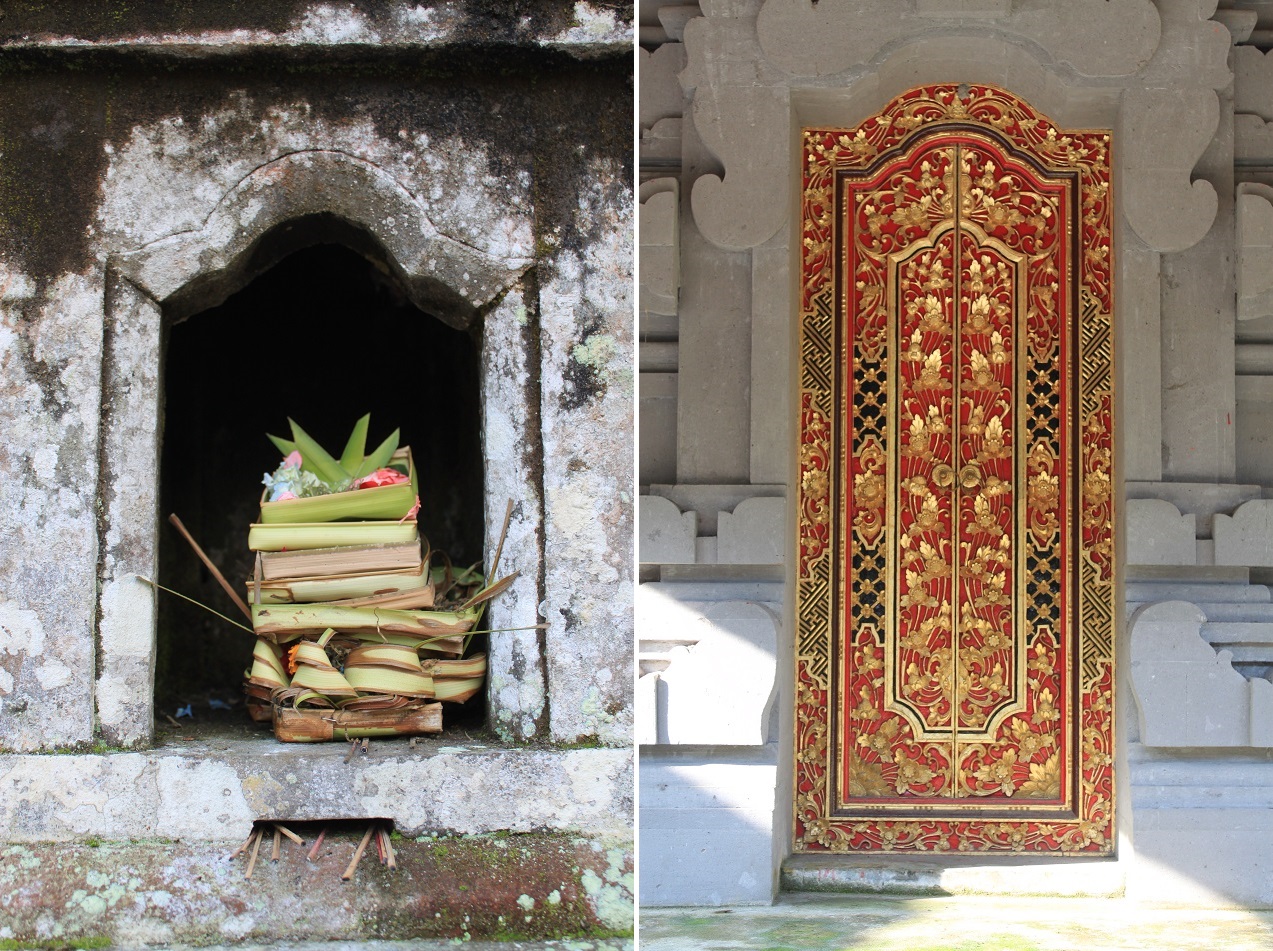 Colors of the Temple

Smiling Faces in the Valley…

…to Balance the Less Friendly Ones 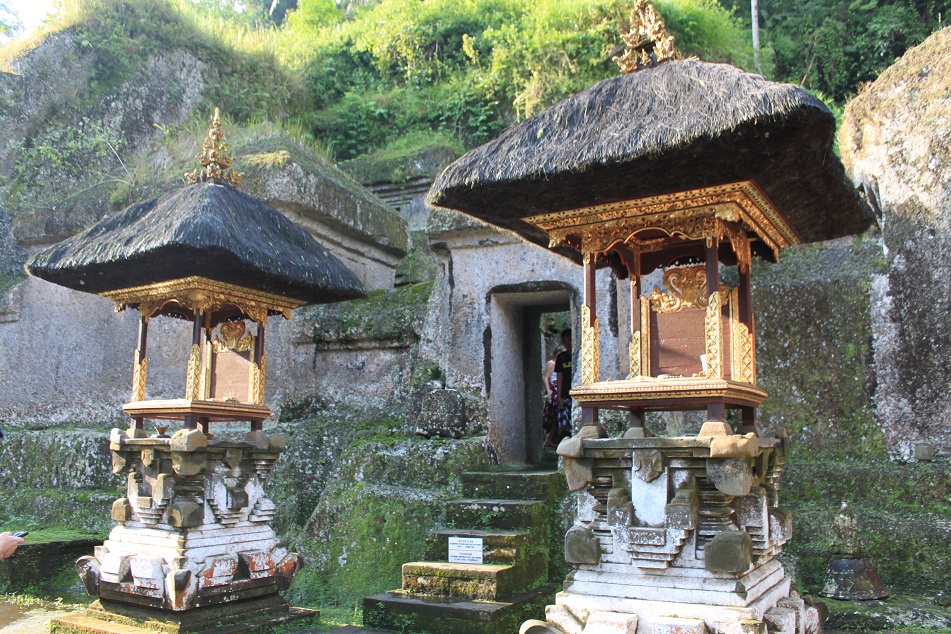 The Entrance to the Meditation Chambers 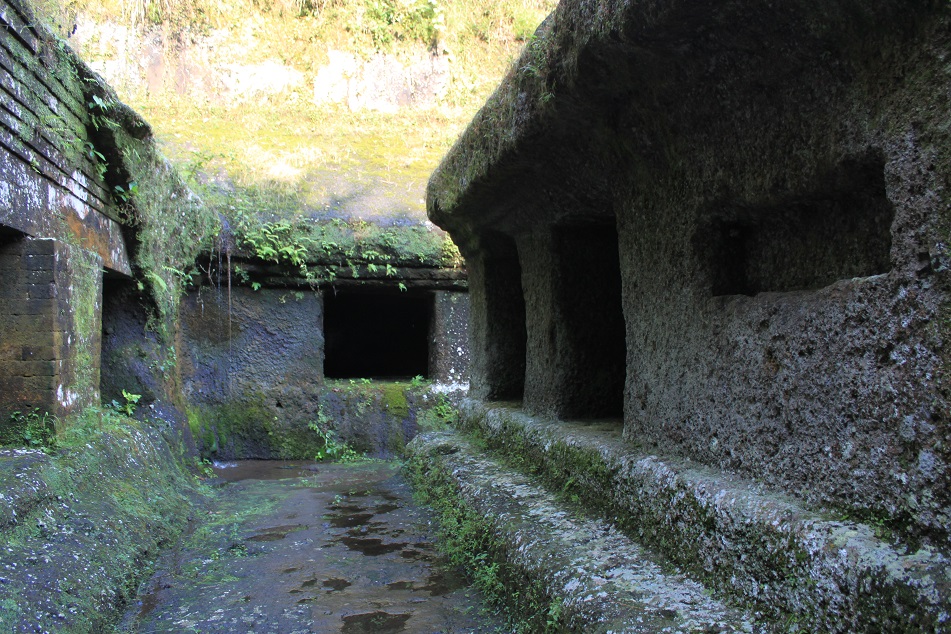 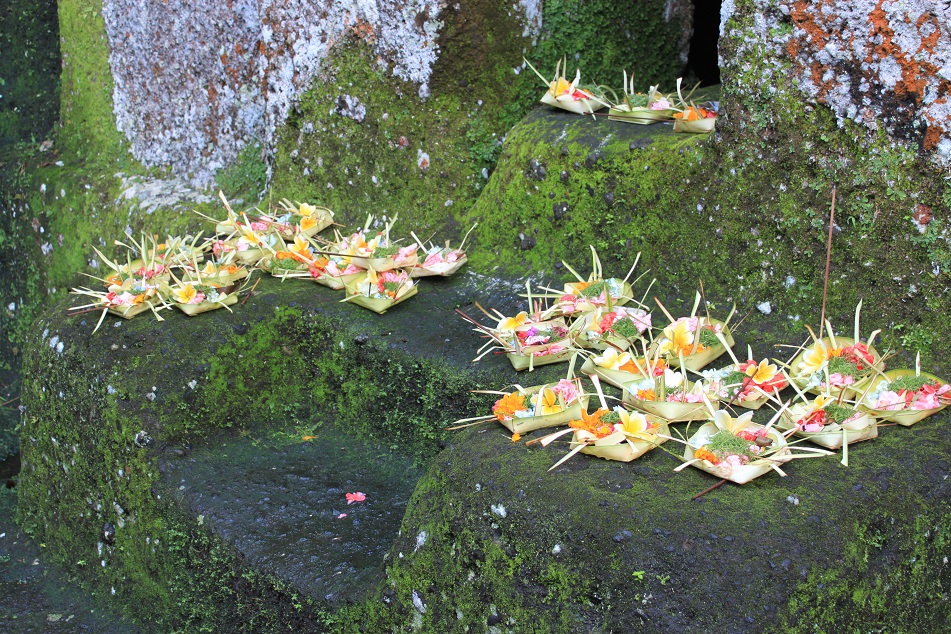 Canang Sari, the Offerings for the Gods and the Spirits

The Eastern Compound of the Main Temples

The Eastern Compound Close Up