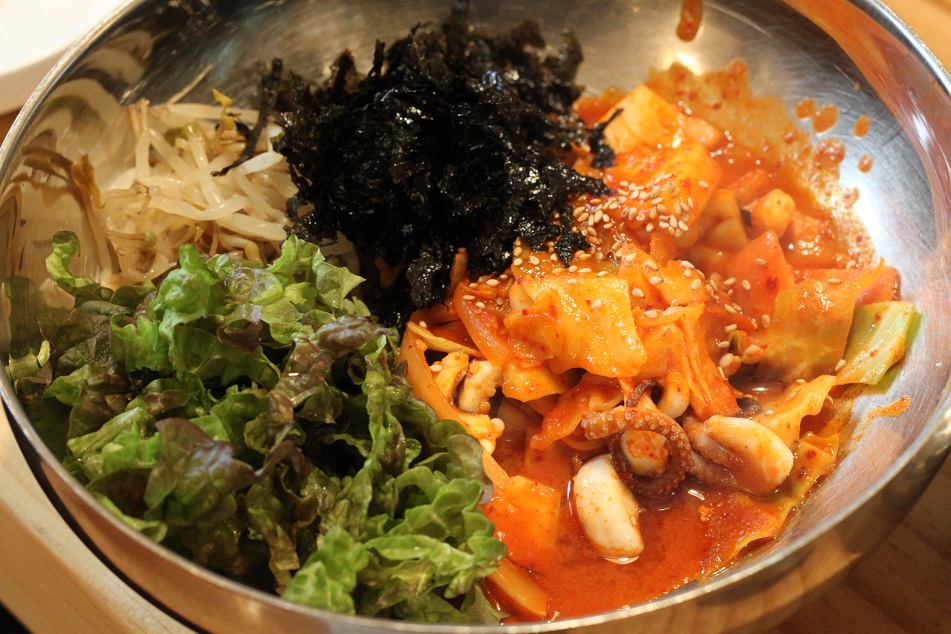 My First Meal in Seoul

It was nine or ten years ago when I first had a Korean dish which, unlike Japanese food, was something I wasn’t too familiar with. At a food court in one of Jakarta’s luxury malls, the colorful look of bibimbap piqued my interest the most as I was choosing what to eat for dinner with friends. Although I wasn’t impressed by the mixed rice dish, that didn’t stop me from actually going to a Korean restaurant several months later with my visiting parents. Either we had picked the ‘wrong’ dishes, or we didn’t know how to properly eat the ones we ordered, or the flavors were too foreign for our palates, so none of us thought the cuisine was great.

In 2014 I had another chance to give Korean food a try as a few coworkers and I went to a mall near our office for lunch. The mall, which had opened only a year earlier, still hosts a large number of Korean restaurants as well as a large Korean duty free shop. We opted for a Korean barbecue chain whose Jakarta outlet was only a few weeks old, and ordered a generous amount of different types of meat as well as japchae (Korean stir-fried glass noodles and vegetables). The first bite of the meat was a revelation: it was so tender and succulent with an addictive combination of sweet and savory flavors, making it one of the best barbecued meats I’ve ever had. To wash it down we had oksusu-cha (Korean corn tea) which sounded a little strange at first but turned out to be one of my favorite types of tea.

On my first trip to South Korea, exploring Seoul’s food scene was among the things I was most looking forward to, and with a true foodie travel partner in James, trying as many local dishes as possible became one of our top priorities. On the midday flight to Seoul I was hoping to try a real Korean dish, maybe bibimbap. However, we were offered two choices of breakfast meals instead: rice congee or omelette. This was understandable as our flight was supposed to depart the night before, so the breakfast meals they prepared for the following morning could only arrive in Jakarta around 12 hours later. We chose the rice congee, and although it wasn’t a proper, filling lunch, that was the first time I had a type of plump, short-grained Korean rice with an interestingly soft and slightly chewy texture which I grew fond of.

Our real experience with Korean food began on our first morning in Seoul. Feeling hungry and cold, we went to the first place we saw which was just across the small street from our hotel. It looked decent from the outside, and as we stepped inside a cozy and warm ambiance exuded from within; it appeared to be a family-run restaurant. Amid a jumble of Korean letters none of us could read, there were fortunately some English words on the menu so we didn’t have to make random guesses. First came Korean fried pancakes which were not only delicious, but also an ideal dish to have when the temperatures outside never went above 10 degrees Celsius. Not long afterward came a metal bowl filled with a cornucopia of mouth-watering colors: bright red spicy octopus with cabbage, fresh green lettuce, slightly translucent yellowish beansprouts, glistening black seaweed, and white rice made from the same kind of grains I had tasted on the flight the day before.

I once read about the Korean philosophy of Eumyangohaeng, the theory of yin and yang and the five elements that make up the universe. According to this belief, a person’s health is determined by the balance of yin, yang and the five elements, hence the plethora of Korean dishes served or garnished with the five colors: red, green, yellow, black and white. For sure, our satisfying early lunch provided us with much-needed energy to explore the chilly South Korean capital. 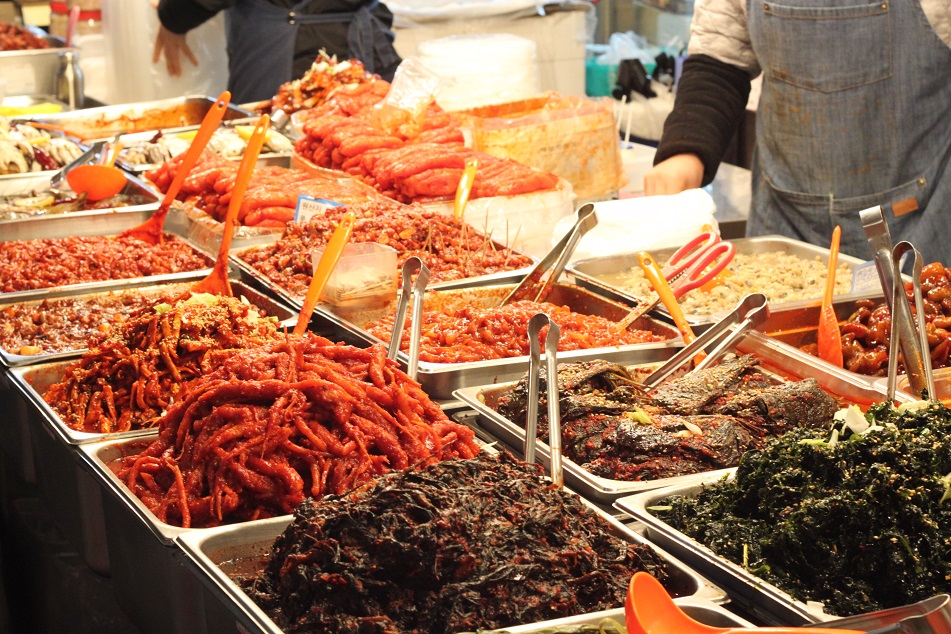 A Cornucopia of Pickled Vegetables 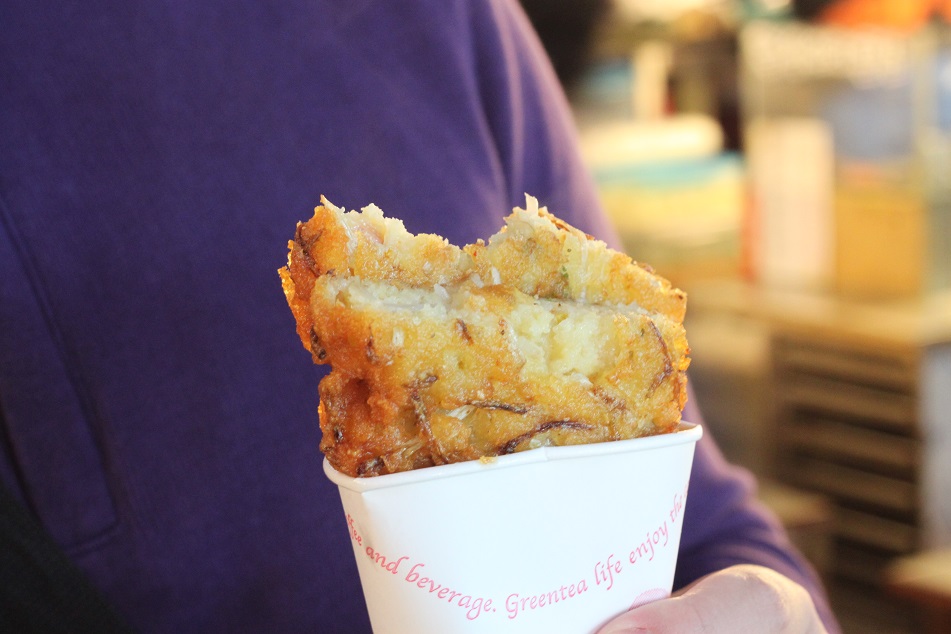 Deciding What to Have for Dinner

For dinner we were in a more adventurous mood, and we made a beeline for Gwangjang Market. Underneath the covered alleys of the market were hundreds of food stalls selling just about anything Korean, from a wide array of fermented vegetables, to heaps of japchae (thick glass noodles) and steaming mandu (Korean dumplings). But we ignored them for now as we wanted to taste one dish this market is particularly famous for, so much so there’s an entire alley dedicated to it. It was yukhoe, a Korean take on steak tartare, that drew us there in the first place.

Despite having been a sashimi lover since the first time I had the Japanese raw fish dish many years ago, my experience with uncooked beef only began last October in Sydney. Different from the Vietnamese-style steak tartare I had in Australia’s largest city which was sprinkled with fried shallots and served with prawn crackers, our yukhoe came with a generous amount of raw beef sitting atop julienned Korean pear, served with sesame oil, sesame paste, fresh garlic and chili peppers as condiments. On top of the beef was a raw egg yolk to be mixed in with the other ingredients. This is probably a dish your doctor or nutritionist warns you against trying, but it’s a delicacy that has been eaten by generations of Korean families, so they must know what they’re doing.

After finishing a generous portion of yukhoe and a bottle of soju (Korean distilled liquor), we ventured deeper into the market to sample some Korean snacks. Bindaetteok, or fried mung bean pancake, was our first choice. Stacks of the pancake sitting on a brightly lit perforated metal counter would certainly tempt any passers-by, including us. The snack, made from mung bean batter with mung bean sprouts and other vegetables, was perfect for the late afternoon as the coldness of night started to creep in. Then we headed to a nearby stall where a pile of local delicacies that might appear intimidating to some were sitting next to warm mandu. Everything was delicious, but our stomachs could only take so much food. We had to call it a day and skip other snacks in the market which looked equally tantalizing.

On our final night in Seoul, we explored the southern banks of the Cheonggyecheon, a revitalized stream that has now become a symbol of the city’s rebirth as a more livable place. We were wandering around and stopped at a small street where two restaurants stood directly opposite each other. One specialized in sannakji (live baby octopus), and the other in bulgogi (grilled meat). Despite being very curious about the squiggling yet potentially dangerous seafood dish many people have filmed themselves trying, we opted for meat instead which turned out to be a great decision. Our trip to Seoul surely didn’t start in the best way possible, but our dinner of the juicy and spicy “fire meat”, what bulgogi literally means in Korean, was perfect to end the trip on a high note… though we might have pushed ourselves a little too much with individual bottles of makgeolli (Korean carbonated rice wine) since we didn’t think it would be so potent.

Our flight back to Jakarta was quite uneventful, until it was time for the flight attendants to serve lunch. “Would you like to have bibimbap or ….?”

“Bibimbap!” both James and I responded enthusiastically. We can’t even remember what the other dish was, but it certainly wasn’t Korean.

She handed out a plastic bowl filled with vegetables and minced beef to each of us, alongside a sealed container of white rice. We followed the instructions, mixed the rice into the bowl, added sesame oil and gochujang (Korean red chili paste), and voilà! A delicious-looking bibimbap for lunch. It tasted much better than the one I had many years ago, although that’s probably because of my more receptive palate today, the result of a long process of embracing unfamiliar flavors from different cultures that make the world a fascinating place. 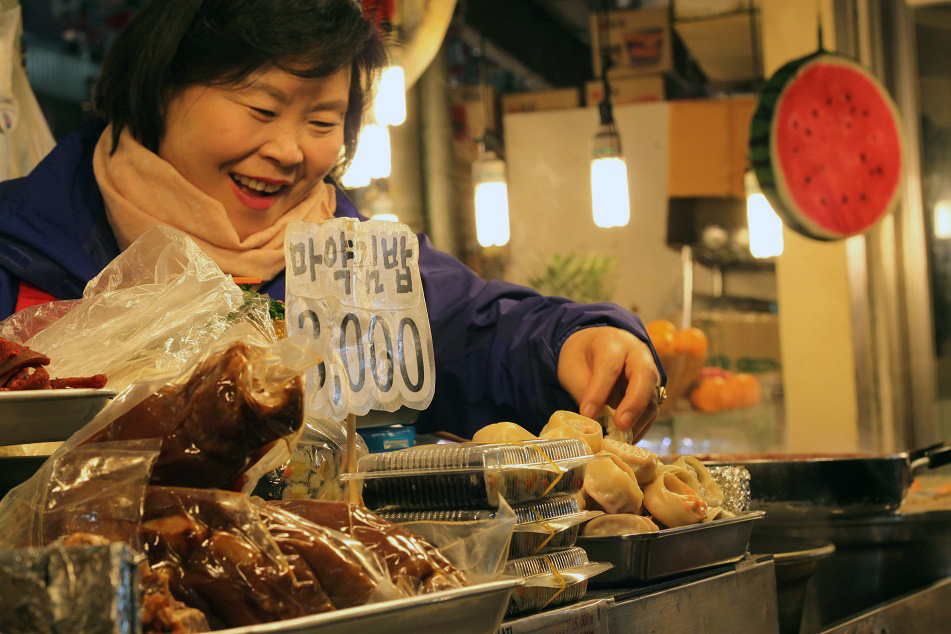 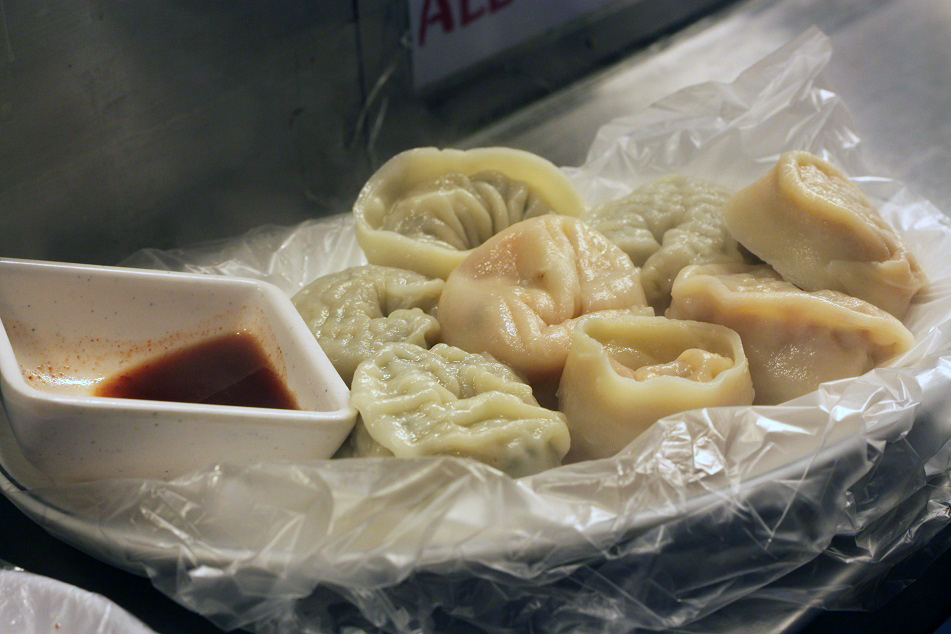 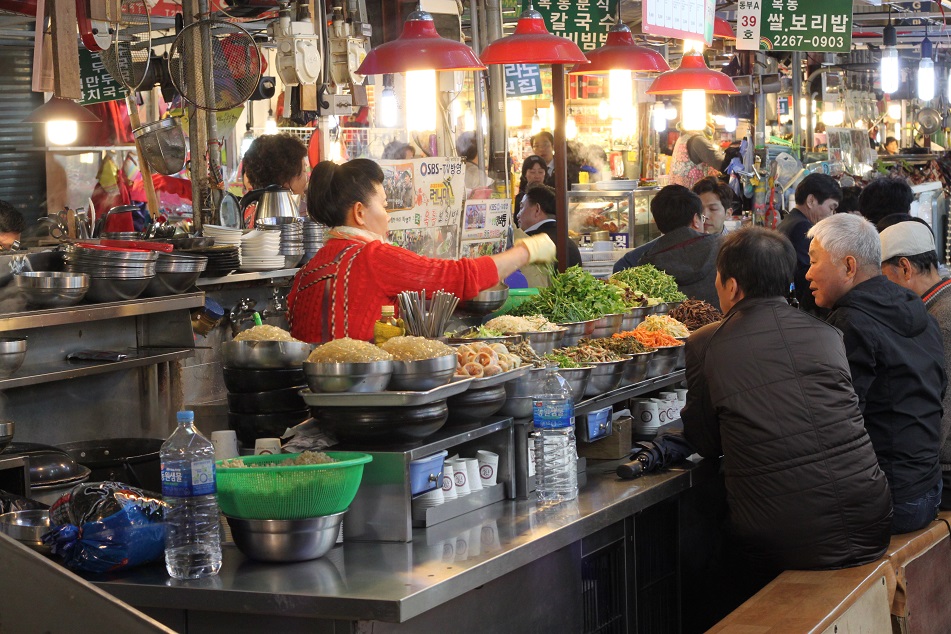 A Japchae Vendor in Action 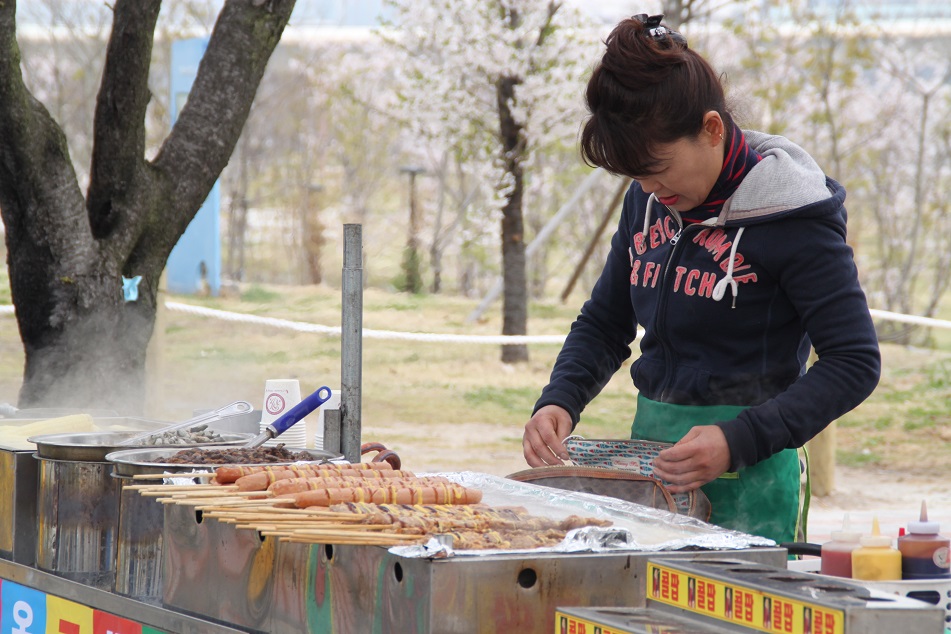 Fluffy and Warm Egg Bread, Perfect for A Cold Day 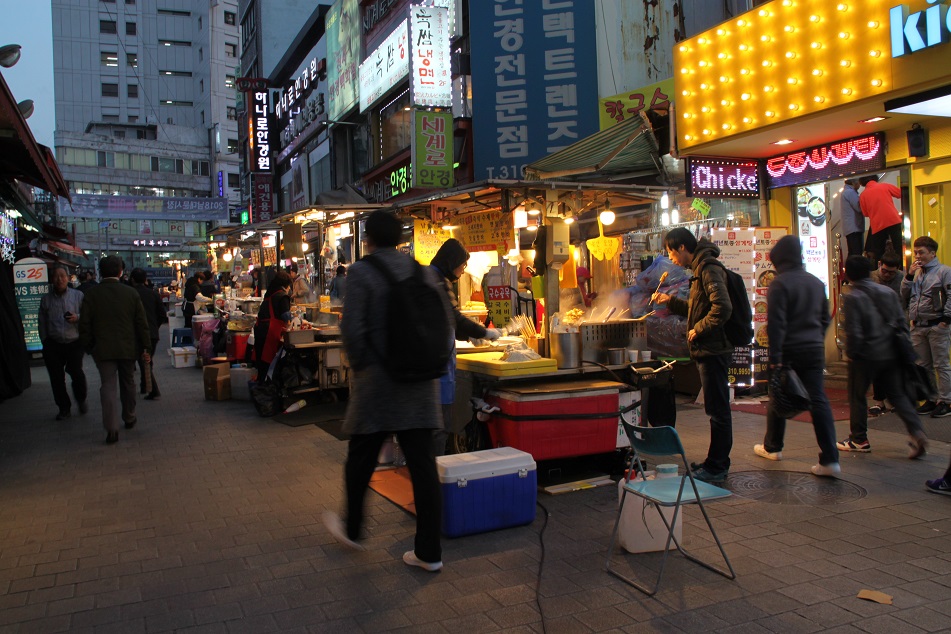