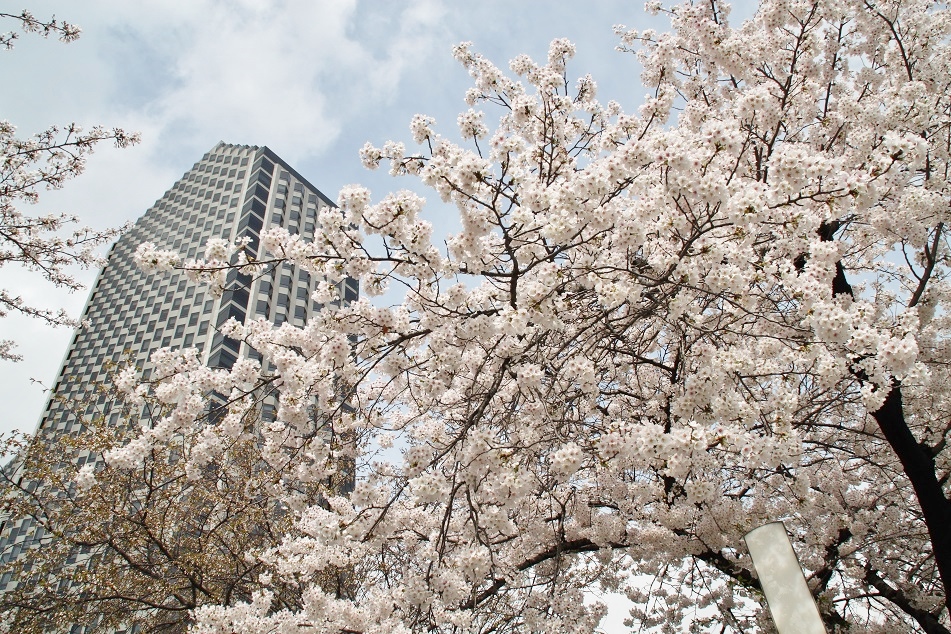 Cherry Blossoms near the Headquarters of LG Electronics on Yeouido, Seoul

It was supposed to be an easy trip.

Back in November last year when my perennial travel buddy, James, and I were planning a short escape from Jakarta in April, we were sorting through places that neither of us had ever been to and would be easy to reach. Of all the contenders, Seoul came out on top. Not only are there several non-stop flights from Jakarta to the South Korean capital, but the fact that Seoul has a vast metro network justified our decision as we’d be able to go from one place to another within the city quite efficiently. Plus, Jakarta now has a fully operational airport train that takes people from the city center to the main international airport much faster than a taxi during rush hour.

On the night we were supposed to leave for Korea, however, as we were watching a tuna fishing competition on TV at the departure area of Soekano-Hatta International Airport, flashes of light outside stole my attention. I came closer to the darkened window to find a very concerning circumstance unfolding before my eyes: a big thunderstorm blanketing the airport with torrential downpours and strong gusts of wind. Not long afterward, an announcement was made, calling passengers of our flight to enter the boarding lounge. But it was there where the true aftermath of this tempest became evident. The runway and taxiways were eerily empty with no activity in sight. Two parked airplanes and occasional bolts of lightning were the only things visible from where we sat. Soon after 11pm, less than an hour before we were due to leave, trickles of information started coming in. First, a fellow passenger who was sitting behind me told another person that the plane from Seoul had been diverted to Singapore. Then the ground staff announced that the flight would be delayed without mentioning for how long. Several minutes later, one of the ground crew told a lady in front of us that the plane had in fact circled above Jakarta a number of times due to the bad weather, but it would arrive “probably at 2am”. And then a final announcement: our flight would be postponed by more than 12 hours.

We were supposed to arrive at our hotel in Seoul before noon, but because of the unexpected drama with the weather, we ended up checking in just after midnight, effectively cutting the already short trip by a day. But thanks to Incheon International Airport’s fast immigration process and efficient baggage handling, as well as a metro line that goes directly to Seoul city center and trains that still run at midnight, we were able to save precious time to get some much-needed rest before exploring the city.

The following morning we had brunch at a small, cozy restaurant just across the street from our hotel. Sometimes it is the first meal you have in the morning that will set your mood for the rest of the day, and this couldn’t have been more true for me after having a satisfying bowl of spicy octopus served with lettuce, beansprout, and seaweed. Combined with delicious Korean fried pancakes and what I consider some of the most succulent and moist rice I’ve ever tasted, I was ready to seize the day, regardless of the time we had spent just to get to Seoul.

We arrived in the beginning of spring, hence the abundance of colorful flowers all over the city, including cherry blossoms which looked pretty despite the cloudy skies. On our first day, not only was the sky gloomy, but it was also drizzling incessantly, forcing us to head indoors. The National Museum of Korea, occupying an ultramodern building overlooking a lake with a small traditional pavilion, was our first and only stop that day. Little did we know that marveling at Korea’s cultural treasures at the museum would take hours, and in the space of a single afternoon we only managed to explore the exhibits on the ground floor. Because of Korea’s position between two Asian giants – China and Japan – I used to think that Korean culture was somewhat inferior compared to those of its powerful neighbors. But I was proven wrong. Artifacts collected from all over the Korean Peninsula show how refined Korean art has existed for centuries and how much attention the Koreans have been putting into their culture, creating masterpieces that have withstood the test of time.

The Sidewalk Has Never Been Prettier

Full Bloom on A Cold and Windy Day

When the Sky is Gloomy at Least the Flowers are Not 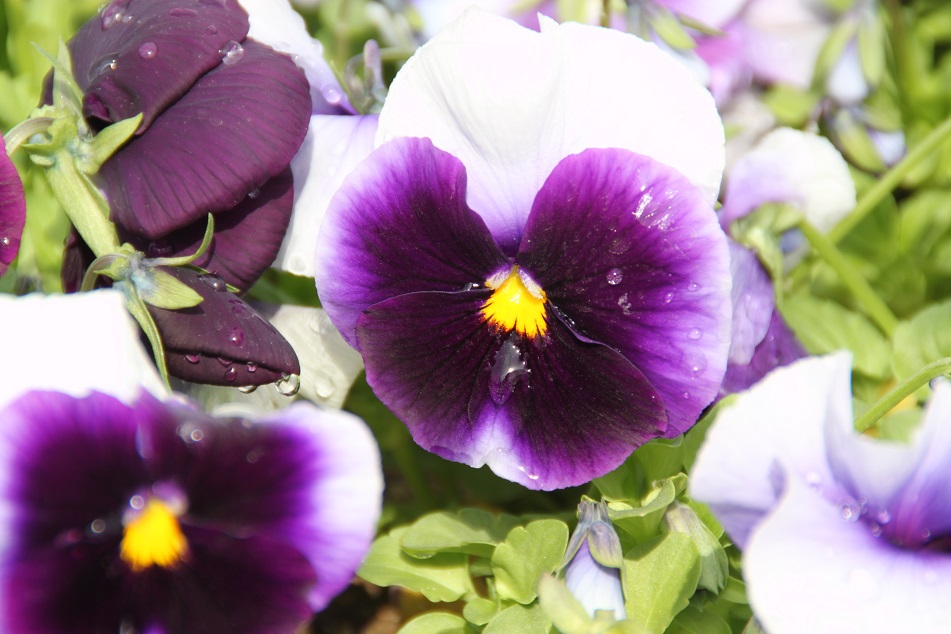 Morning Dew on Yeouido, An Island on the Han River 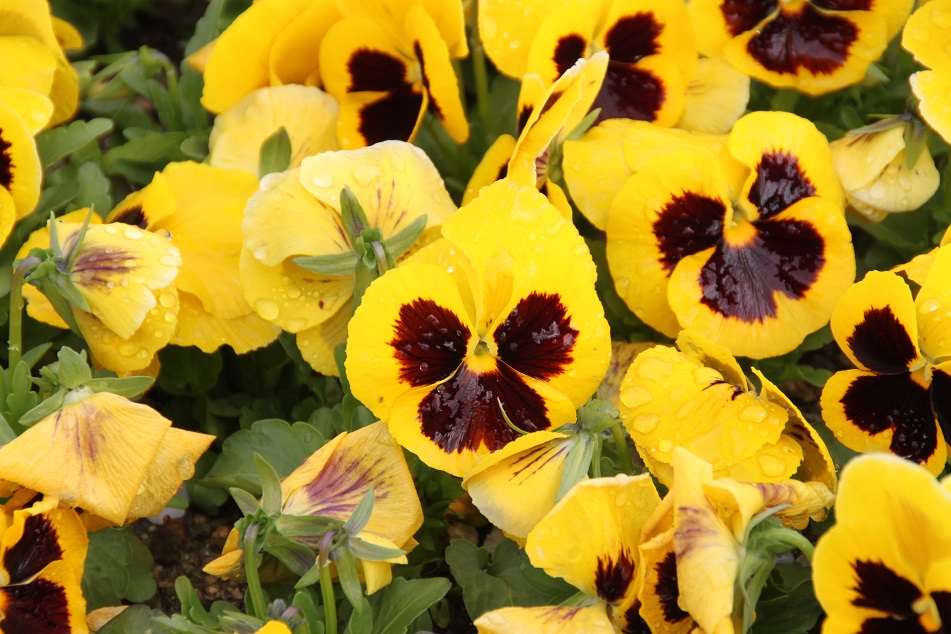 Inside the National Museum of Korea

Throughout our stay in Seoul, the weather gradually improved. And when the rain stopped falling, we made the most of our limited time to explore the city’s royal palaces. Gyeongbokgung is the grandest of all five palaces that date back to a time when Korea was still ruled by kings. Situated to the north of Gwanghwamun Plaza – where millions of Koreans gathered back in 2016 to demand the resignation of Park Geun-hye, South Korean president at that time – Gyeongbokgung received a steady stream of all kinds of visitors.

However, not too far to the east, another equally impressive palace was a lot quieter when we visited. Changdeokgung is in fact the only of Seoul’s royal palaces that is a UNESCO World Heritage Site, and we were fortunate to be able to explore the complex on a sunny morning on our last day in the city. Mother Nature really has her own sense of humor – our journey began with a thunderstorm, continued with gloomy skies, and ended with a fine morning just when we needed sun the most. The sun, however, failed to bring a little warmth to the frigidly cold spring day, and these fingers of mine, more used to dealing with tropical heat, suffered the most.

I grew up reading about how South Korea successfully transformed its economy at an unprecedented speed, bringing the country out from poverty into the developed powerhouse it is today. A story I always remember from my school days is how South Korea’s per capita Gross Domestic Product (GDP) was equivalent to Indonesia’s in the 1950s, but it is now seven times richer by the same measurement (although by GDP per capita at Purchasing Power Parity, South Korea is ‘only’ three times richer than Indonesia). I also read about how South Koreans’ collective spirit to beat Japan economically has boosted the nation’s confidence to leap forward and reach the same level of prosperity with many First World Countries today.

It’s not hard to find Samsung or LG mobile phones, TVs, or other home appliances wherever you go now – probably even you have one. And Korean automobile manufacturers – chiefly Hyundai and KIA – have also found their way into all the four corners of the world. As one of the Four Asian Tigers – a collective term for South Korea, Taiwan, Singapore and Hong Kong, whose economies had transformed drastically, making them highly-industrialized, developed countries/territories in a relatively short time – South Korea is a success story many are trying to replicate.

Buffeted by the Cold Wind at Gyeongbokgung

Look Up Where Beauty Abounds 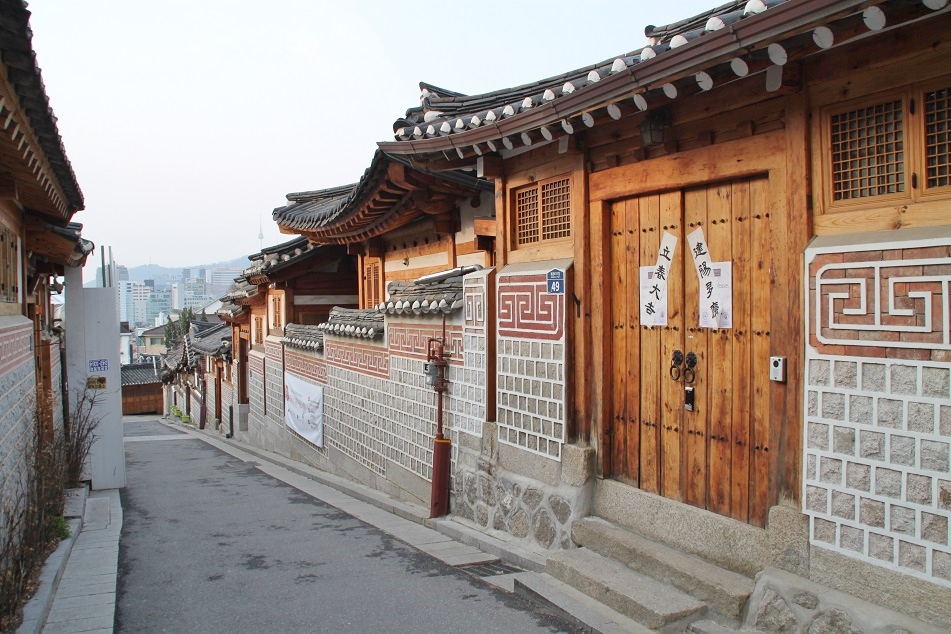 The Soft Light of the Morning Sun

My First Meal in Seoul

Despite the palpable modernity in Seoul – glass skyscrapers, extensive metro lines, world-class architecture, technology in everyday life – Seoulites are keen to preserve some old traditions that have been passed on for generations. Apart from the grand palaces, the city is also home to Korean traditional houses, hanok, which stand unassumingly against the backdrop of the city’s concrete buildings, which are a result of South Korea’s march toward modernity. And in spite of the advent of foreign dishes, the Koreans will never let go of their kimchi, bulgogi, gochujang, tteokbokki, yukhoe, and a wide array of other dishes local families have been eating for centuries. Instead, they export them, introducing Korean flavors to the world, not only to places with significant Korean communities, but also to countries whose traditional culinary scenes are as colorful and rich as the one from the East Asian country.

This successful soft power diplomacy – a country’s effort to spread its influence through peaceful means – is without doubt backed by other exports South Korea is famous for: K-pop and K-dramas. While Japan relies on its manga (Japanese comics) and anime (Japanese animation) with unique characters and captivating stories, South Korea opts for upbeat music, flawless make-up, and touching stories about love and family. South Korean soft power has even reached far-flung places where a fascination with Korea was unheard of until recently. Turkey, itself a major exporter of soap operas, has particularly been swept by Hallyu – the Korean Wave – and it is now home to six King Sejong Institutes (founded by the South Korean government to promote the Korean language), more than any other European country. Meanwhile in Peru, K-dramas enjoy higher levels of viewership than locally-produced TV series, and the South American country has the most Hallyu fan clubs in the world.

Isn’t it nice when countries try to exert their influence across the globe not through intimidation or military might, but through songs, movies, books, and other cultural offerings?

But it’s not always good news in Seoul. The city has one of the highest suicide rates on the planet, a problem attributed to South Korea’s culture of hard work and decades of stellar economic growth, and air pollution has stubbornly remained a big problem. However, driven by better public awareness of what makes a city more livable, Seoul keeps reinventing itself, solving one problem at a time. Cheonggyecheon is a testament to this spirit. The stream that runs through downtown Seoul was once covered by a four-lane highway that was built during the rapid industrialization of South Korea. Only in 2003, a project to restore the almost dry stream was commissioned by the city government and it has become a popular place to hang out or just stroll around. Another example of Seoul’s resilience can be seen at Namdaemun, a 14th-century gate which served as one of the major gateways to the city through the long-gone city walls. Destroyed by an arson attack in 2008, the gate’s wooden structure had to undergo an expensive restoration project that lasted for five years. Today, against all odds, once again it stands proudly in the middle of a busy intersection surrounded by the city’s modern buildings.

For long I had been overlooking Seoul in favor of other destinations, not because I wasn’t interested in it, but more because of what some people had told me.

“After going to Japan, South Korea will feel underwhelming,” a coworker once said.

“You should have done it the other way around, South Korea first, then Japan,” another person suggested.

However, despite the less than ideal weather and a short trip that became even shorter, I ended up enjoying Seoul so much. Its juxtaposition of the modern and traditional, its magnificent cultural sights, and the delectable Korean food (from the best kimchi to succulent Korean steak tartare and melt-in-your-mouth bulgogi) are reason enough to plan another trip to South Korea – and a much longer one at that. 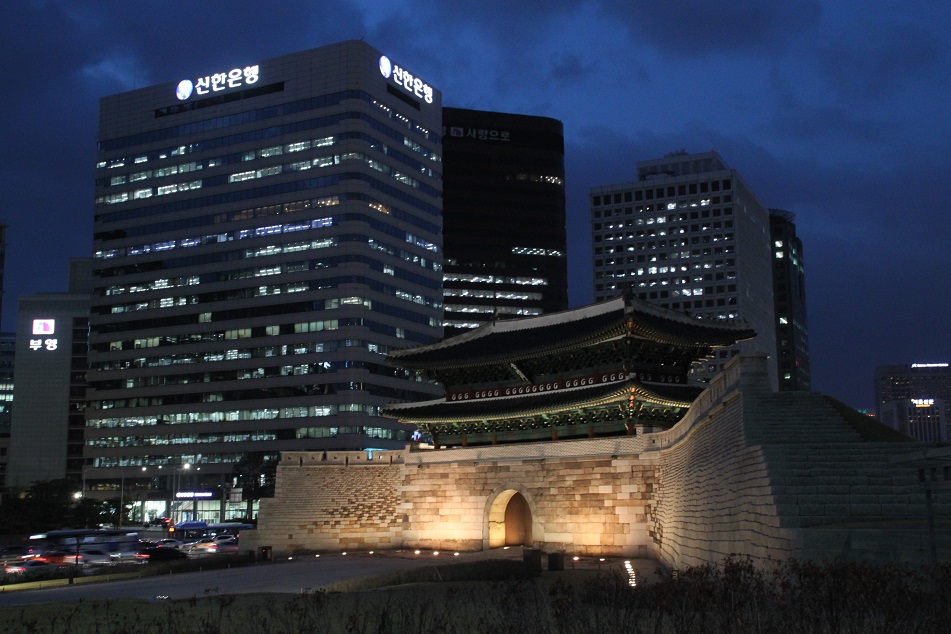 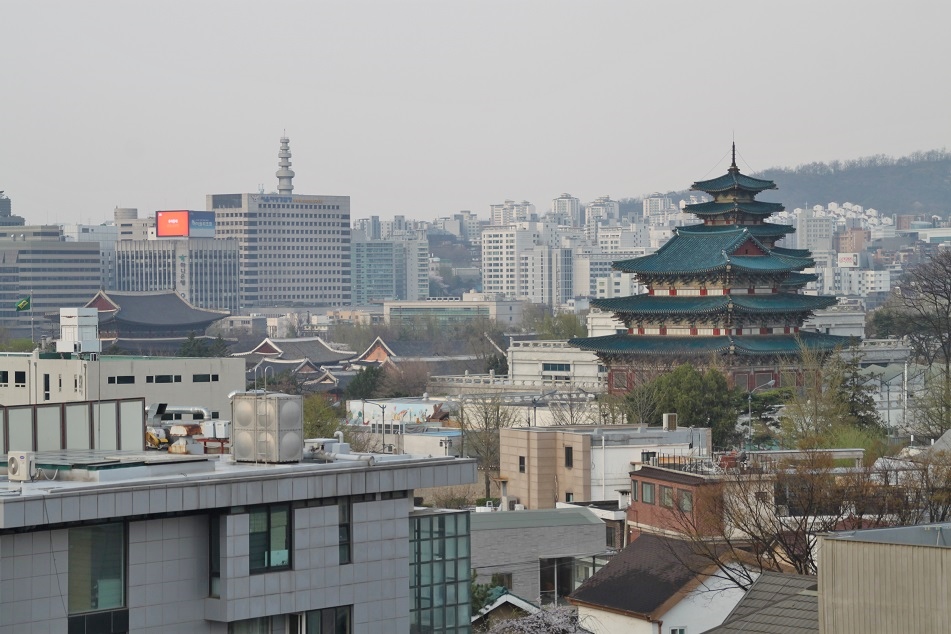 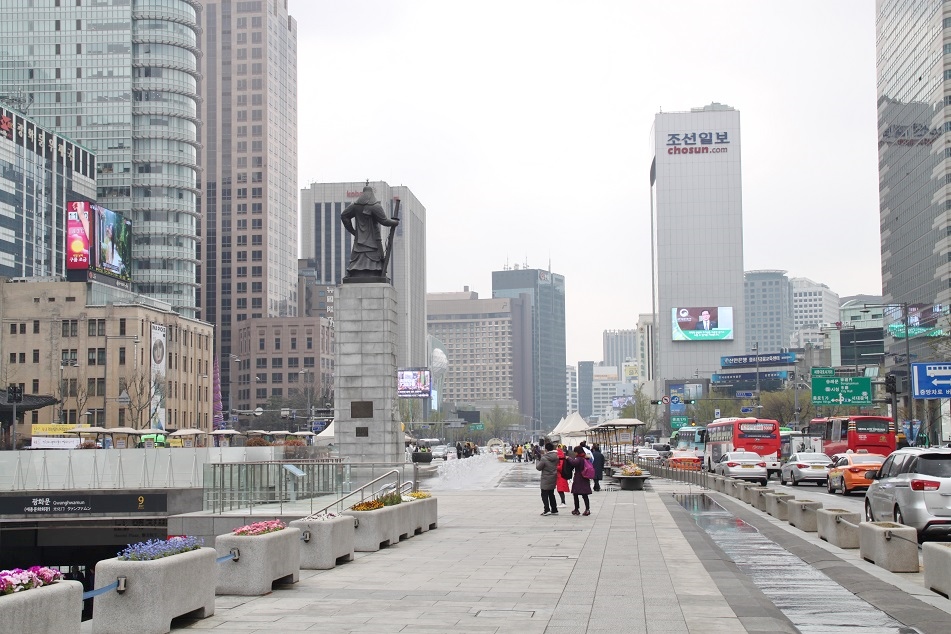 The Ultramodern Seoul City Hall with the Municipal Library in Front

A Highway Once Covered This Stream Entirely

66 thoughts on “First Time in Seoul”