In an age of mass tourism like today, places with stately, magnificent landmarks that are hundreds or even thousands years old draw people from all over the world to come and visit, marvel at the impressive monuments, and feel that they’ve become part of the global community. Sharing space and rubbing shoulders with many other tourists at places like Angkor Wat in Cambodia or Thailand’s Grand Palace is now the new normal, although our egos undoubtedly wish otherwise so we could enjoy these sites in a much more peaceful and relaxed way, and take as many photos as we like. In spite of that, people keep coming to such places for an obvious reason: because they are worth seeing at least once in our lives.

However, taking a detour from the well-trodden path to allow ourselves to get ‘lost’ and end up in places many don’t even consider visiting often rewards us with some of the most unforgettable travel experiences. To me, this happened on my trip to a small city called Blitar a year ago.

Mention the name of the city to any Indonesian, and the response would likely be an awareness that such a place does exist, with the vague idea that it is located somewhere in Java. When I told my parents that I was going to this city of a little over 130,000 people, they checked their old atlas only to discover that it wasn’t even marked on the map. While the nearest airport is about two and a half hours away at Malang – a small airport served only by a few flights a day – the closest one serving international flights is a four- or five-hour drive away at Surabaya. Taking the train from Jakarta is more straightforward, though the journey takes more than 15 hours.

If reaching Blitar requires so much effort, is it really worth visiting?

When James and I arrived in the city, a calm ambiance was palpable, and the pace of life seemed considerably slower than the one we are used to in the Indonesian capital. Traffic jams were nonexistent, and tall glass skyscrapers were conspicuously absent. We stayed in a beautiful mid-19th-century mansion built in the Indies Empire style which, thanks to its current owner, was turned into a museum-like hotel with guests coming from far-flung places like the Netherlands. While the Dutch might come to see the relics of a bygone era in their former colony, many Indonesians visit this low-key city in East Java province due to its historical connection with one of the founding fathers of the nation: Sukarno, Indonesia’s president for 22 years.

Gebang Palace is one of the Sukarno-related sites in Blitar which, despite its name, is in fact a rather humble affair. Consisting of several bungalows, this was the house where Sukarno spent his high school years. Portraits and paintings of him alongside the bed, chairs, and other things he used during his time living in the house were proudly displayed throughout the museum. Pilgrims who come to this unassuming city would certainly be delighted to see how their beloved president is still venerated long after his death. A friend of India’s Jawaharlal Nehru and Yugoslavia’s Josip Broz Tito, Sukarno was and still is seen by many as a president who boosted Indonesia’s profile on the world stage. His critics, however, see him as a confrontational head of state who instigated a conflict with Malaysia, threatened to annex India’s Andaman Islands in support of Pakistan (despite Indonesia’s initial warmth toward India), and actually revoked Indonesia’s membership in the UN – not to mention his policies that pushed the economy into a downward spiral.

The pilgrimage trail then took us to Sukarno’s final resting place, a marble tomb underneath a three-tiered roof embellished with ornate wooden carvings on the ceiling. People gathered around the rectangular grave, spreading flowers – from rose petals to sweet-scented cananga – and praying. A stark contrast to the traditional Javanese architecture of the tomb, a modern building stood a few meters away, housing a museum that showcases Sukarno’s life from his childhood to his time as president.

Yet, Sukarno is not the only founding father Blitar is associated with.

A Banyan Tree in the Middle of the Alun-Alun, or Central Square

The House where Sukarno Spent His High School Years 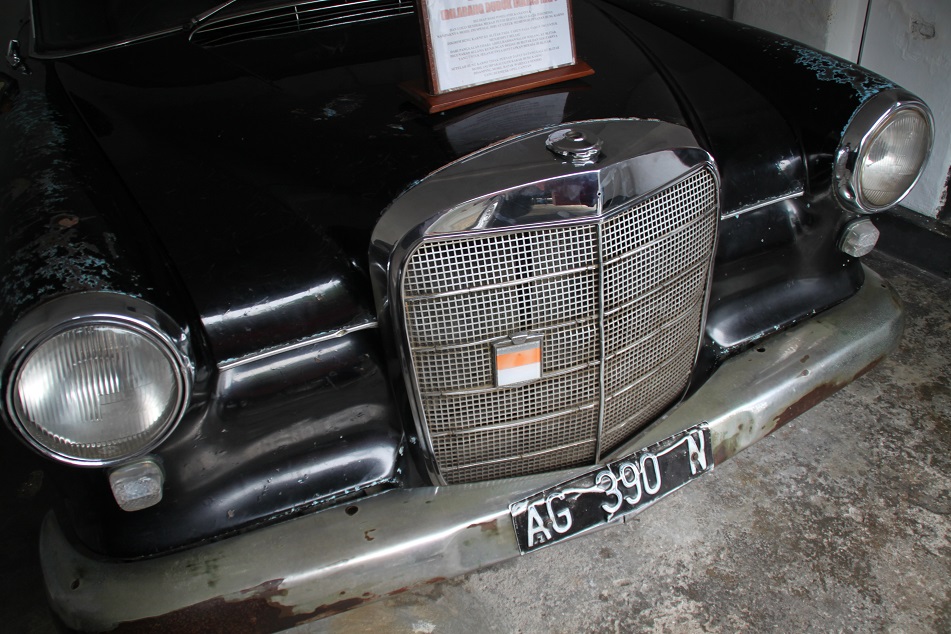 The Official Ride of the Former President

More than 700 years ago when Java was still predominantly Hindu, a Singhasari prince successfully defeated the invading Mongol army, one of only a few places in the world that managed to curb the ever-expanding realm of the Asian nomadic people. Raden Wijaya, the victorious prince, subsequently founded a new kingdom called Wilwatikta, better known today as Majapahit. Taking the title Kertarajasa, the new king ruled for sixteen years, not long enough to see how Majapahit would grow into a prominent power in the region whose territory, as some historians believe, encompassed most of what is now modern-day Indonesia, Malaysia, Singapore, Brunei and the southern Philippines. This expansion began in earnest under the rule of Queen Tribhuwana Wijayatunggadewi, the third ruler of Majapahit who was also the daughter of Kertarajasa himself.

Upon the death of Majapahit’s first king, a mortuary temple was erected and dedicated to him. Today, however, that temple is all but gone; its foundation and the stones scattered around it are the only things that remain from the early 14th-century structure. Known today as Candi Simping, the ruins were almost deserted by the time of our visit. A friendly caretaker looked happy to see us and chatted a little bit about the politics in Jakarta during the months leading up to the gubernatorial election marred by ugly and highly-divisive campaigns which grabbed the nation’s attention. As a matter of fact, the incumbent deputy governor of Jakarta at that time had served as the mayor of Blitar before moving to the capital. Highly popular during his two terms leading the East Javan city, you can guess which side the caretaker supported even though he couldn’t vote in Jakarta’s election as a resident of Blitar.

At a modest security post guarding the entrance to Candi Simping, a fading print out displayed how the temple would probably have looked during its heyday: a slender and elegant edifice resembling one of the structures at Candi Penataran – which is among the most impressive and expansive ancient temple compounds in East Java and just a half-hour drive from Blitar. Unfortunately, due to the lack of original stones, full reconstruction of Candi Simping is unlikely to happen.

At the center of what was the foundation of the temple sits a rectangular stone with a turtle and entangled Naga serpents carved on the top. Around the lower parts of the foundation, reliefs of animals have been chiseled into the dark volcanic rock, along with floral patterns and mythical beasts. On the left hand side, a row of giant Kala heads which typically adorn a Hindu/Buddhist temple lay helplessly, baked under the scorching sun and showered by the tropical rain for centuries. On the right, a row of Makara and other creatures are also facing the same fate. The shrine to the founding father of Majapahit is sadly more a reminder of the kingdom’s decline, instead of its rise – probably what Kertarajasa himself would have thought if he could see the poor state of Candi Simping today. 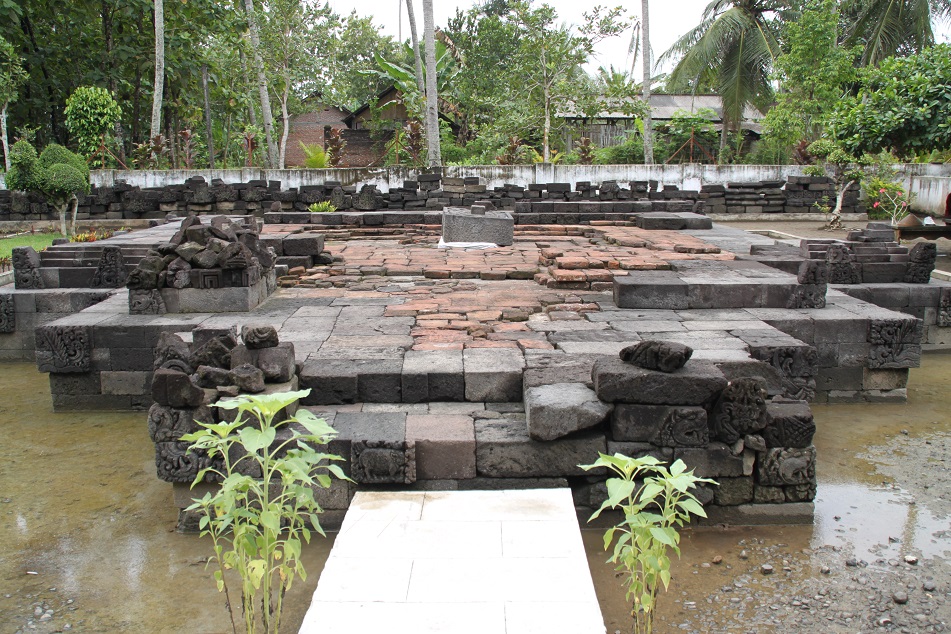 Waiting for the Time when They Return to Their Original Position

A Turtle and Four Naga Serpents 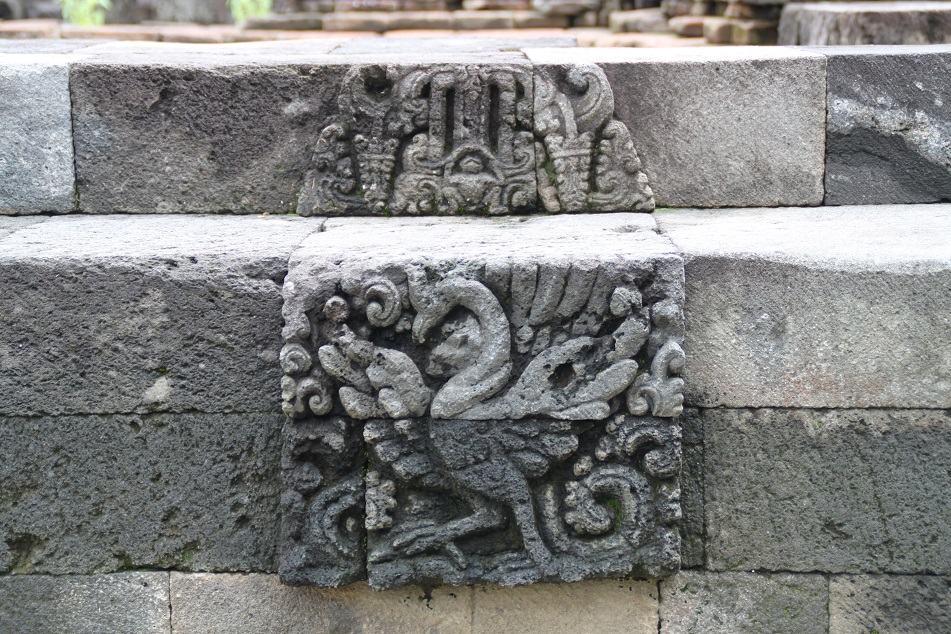 Reminders of the Temple’s Glorious Past

Tranquil Blitar was not only the hub for excursions James and I did to some important centuries-old temples and ruins, but it was also where I tried some unique dishes I had never tasted before. Among them was kotokan kutuk, fried snakehead fish smothered in a rich sauce of coconut milk with tomatoes, chilies, and bilimbi fruit – the latter gave the dish its refreshing, tart kick. Others were more like a local take on some Javanese dishes I was already quite familiar with, including tahu tek: fried tofu with sweet soy sauce, shrimp paste and palm sugar, served with friend peanuts, crackers, pickled cucumber, and a dollop of sambal.

On the sweet side, kue lumpur telo ungu was an indulging, if not sinful, treat inspired by the regular kue lumpur (“mud cakes”). Instead of potatoes, the mud cakes I had in Blitar were made from purple yam, and instead of raisins, the topping was sliced banana which made the cake look even prettier and more colorful. We also sampled some jajanan pasar – a collective term for traditional cakes and sweets typically bought in markets – at our hotel. The diamond-shaped brown wajik was made from sticky rice, palm sugar, coconut milk, and infused with pandan leaves. Meanwhile rice flour and sugar were used to make both the pink-colored apem kukus and the green talam with an arrow-shaped cut of pandan leaf on top of it. In addition to them, boiled peanuts and fried fermented cassava with granulated palm leaves were also served, filling our stomachs to the brim.

Despite its potential, Blitar still is under the radar for most tourists, which adds to its small-city charm. It appears that things won’t change anytime soon unless an airport is built near the city, or the main roads that connect it to other cities in East Java are widened, or a high-speed railway which goes through Blitar is constructed. So far none of these lofty ideas have been translated into an actual plan. For how much longer? No one really knows. 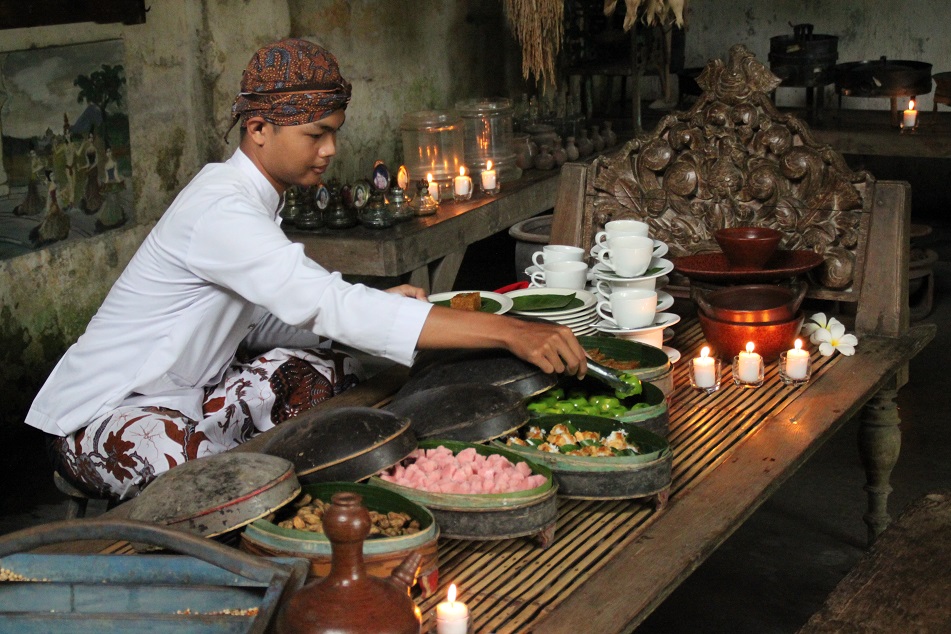 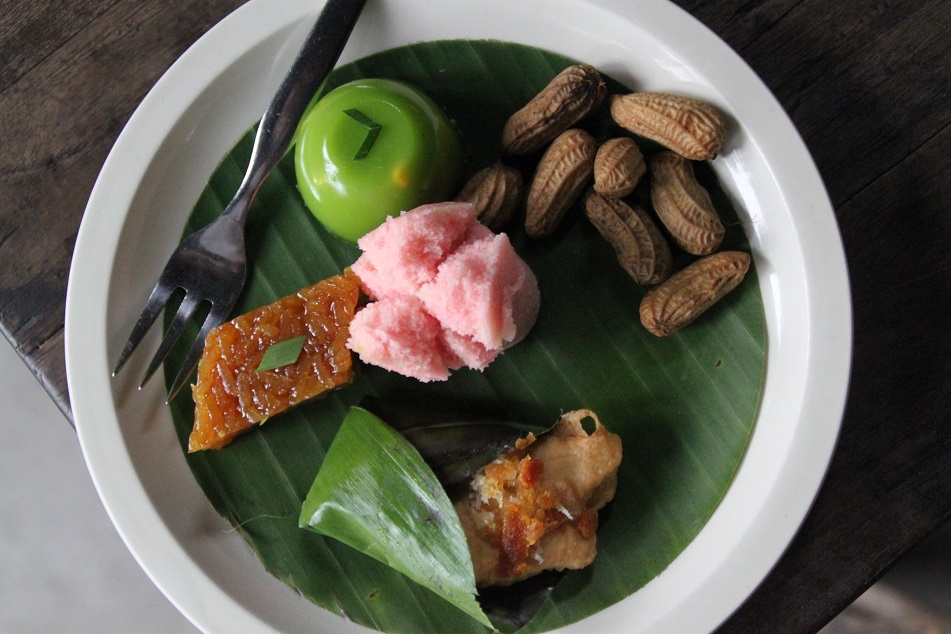 An Assortment of Jajanan Pasar

39 thoughts on “Blitar under the Radar”