Carefully I clamped the round pressed sushi with my chopsticks, trying to figure out the correct way to eat these larger-than-normal rolls of rice and fish. The real struggle though was not about how to eat it properly, but rather how to do everything in utter silence. The other diners who were sitting a table apart from us seemed to pull it off effortlessly. All of their attention was focused on what they were eating. No sounds: just a few short, quiet conversations between courses. I tried not to make even the slightest noise with my chopsticks, while thinking ‘how am I going to take photos of these unique delicacies as quietly as possible?’.

James and I were at Izuu, a nondescript small restaurant in downtown Kyoto better known to locals instead of tourists, as seen in the absence of Latin script outside its wooden facade. People come to Kyoto to see what is ancient, chiefly its temples, shrines and palaces, and many of those places are still actively in use to this day. However, finding a local establishment that is ancient is a lot more difficult as modern eateries and shops have become the norm. But when you find one such restaurant, it’s almost certain that you’ll be treated to among the best and most elaborate dishes you can find in the entire country. First opened more than two centuries ago in 1781, Izuu is one of those rare places, and we were lucky to be able to find it and experience its simple, albeit a little intimidating, ambiance.

Throughout the establishment’s many years in business, there is one dish that hardly changes: a Kyoto-style sushi called saba-sugata-zushi, cured mackerel pressed on to sushi rice and wrapped in thick kombu (kelp). The city’s affinity with cured mackerel is by no means a coincidence. Because Kyoto is situated inland and far from the coast by local standards, the fish was transported centuries ago on foot from the Sea of Japan on Saba Kaido, the old mackerel road. Curing was the only option to make the fish last long over the long distance traveled.

Being a heritage dish which not everyone can prepare means the price is rather steep for a portion (six pieces) of the sushi. But as soon as I took the first bite I understood what made it special: balance is key as each component of the dish didn’t overpower one another. We also had tai-zushi, made from cured sea bream with a lighter kombu to match the more subtle flavor of the fish. Despite my initial nervousness for eating at such an unbelievably quiet restaurant, it all made sense after we finished devouring the delectable dishes. Such delicate flavors can only be appreciated when you allow your palate to be fixated on the dishes without the disruptions from other senses.

As much of an unforgettable experience our lunch at Izuu was, we also looked for a more contemporary take on Japanese cuisine, which we happily found at Sagan, just a few minutes walk from where we stayed. It was rather a coincidence that we discovered this restaurant as we were wandering aimlessly to find a place for dinner. Occupying a machiya (traditional Kyoto townhouse) which has been fitted with modern touches, I was pleasantly surprised by how cozy it was inside. In spite of its location, Sagan’s ambiance and look is suggestive of a hipster café in a more cosmopolitan city instead of a tranquil neighborhood in Kyoto.

After perusing the beautifully-done hand-drawn menu, we opted for their rice and fried salmon which came with miso soup, fluffy egg, stir-fried beansprouts, and a lot more vegetables, from lotus root to turnip, each yielding a distinctively Japanese sweet taste. The steamed pumpkin was so soft and sweet, the julienned carrots cooked perfectly, and the salmon so flavorful. This very satisfying meal was enough reason for us to return for lunch.

Tai-Zushi, Made with Sea Bream 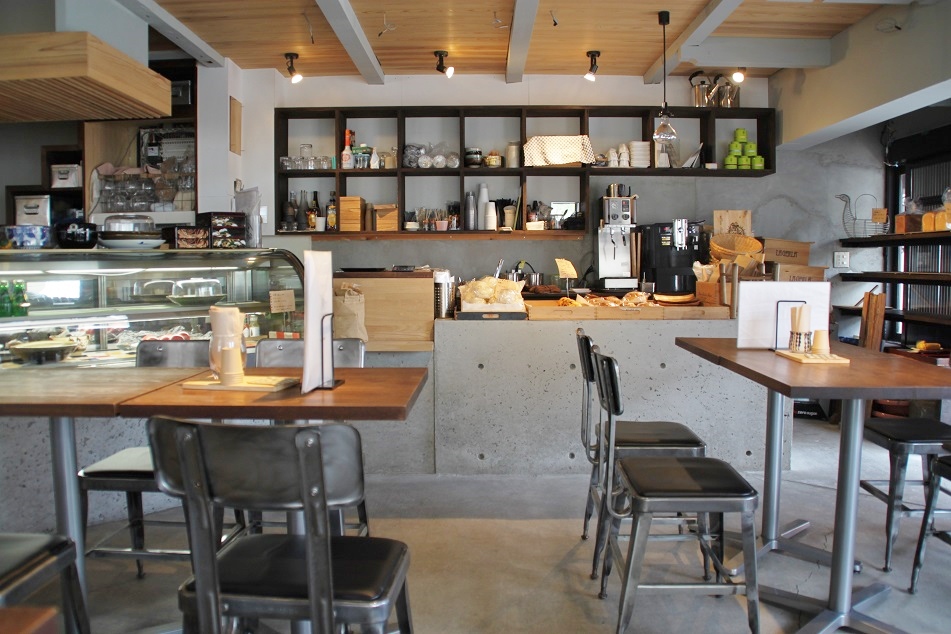 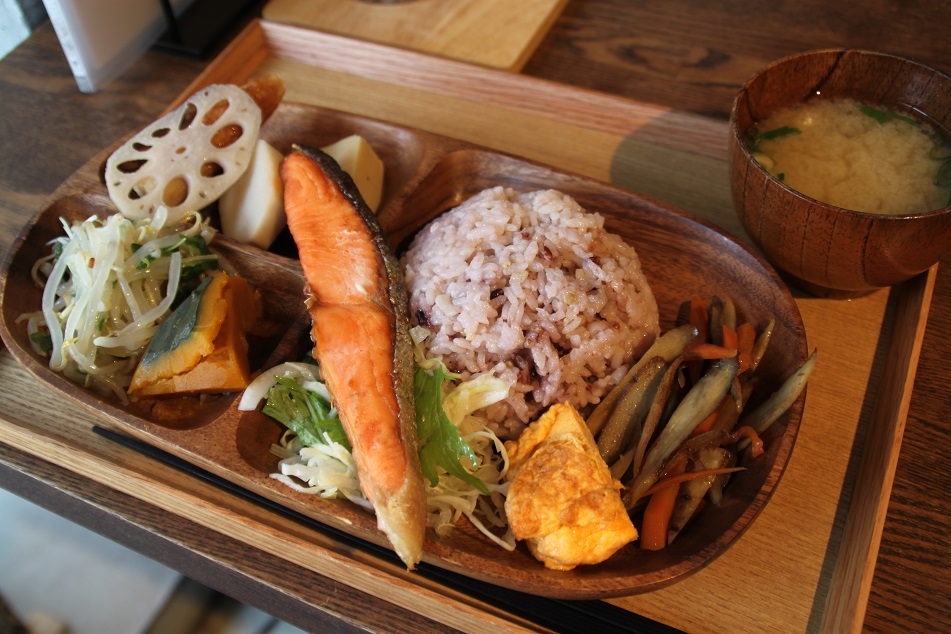 A Healthy Lunch at Sagan

Looking Out to the Tranquil Neighborhood

For a more vibrant and lively atmosphere with a lot of options of authentic Japanese food there’s no place in Kyoto like the city’s own kitchen: Nishiki Market. Spanning five blocks on an east-west axis, the covered traditional market is a haven for foodies. From fresh oysters to bright salmon roe, grilled scallop to Japanese pickles, it’s a place one should visit on an empty stomach.

Walking past a few shops selling Japanese vegetables, suddenly these bright red items caught my attention. Upon closer inspection I figured out what they were: baby octopuses smothered in sauce glistening under the shop’s light. I had tried baby octopus in Jakarta before but the ones I saw at Nishiki Market looked rather different: their heads appeared to be filled with something that made them appear very round. Tako tamago, apparently, is a baby octopus marinated with a sweet and savory sauce and stuffed with a boiled quail egg. Not expecting it to be so tasty and addictive, I ended up having two (or three) more octopuses during our time at the market. Had we spent one more hour there I’m sure I would have grabbed my fourth (or fifth) baby octopus!

We continued exploring the colorful market with our eyes wandering from one tantalizing delicacy to another, and decided to drop by a shop that served unagi no kimo – eel liver. As I bit into the brown fried liver whose texture was slightly reminiscent of chicken heart, rich flavors exploded inside my mouth. Who would’ve thought these fried organs could be so flavorful? With two exceptionally delicious snacks in a row, we became even more curious about what other unique dishes this market had to offer.

Due to the lack of space, at most shops patrons have to eat while standing, although a few do provide one or two small tables for people to dine a little more comfortably, like what we did while having grilled squid served with soy sauce. The squid was of course very good and fresh, but the best grilled seafood we had at the market was definitely these skewered scallops we had at another shop which were so plump, juicy, sweet and a little smoky. Unsurprisingly James, a big fan of scallop, bought another skewer.

For sure not everything at the market was savory. We stumbled upon a mochi shop where we had matcha warabi mochi (green tea mochi), and being a person who loves both matcha and mochi I found the ones we had a real treat to cleanse our palates in between those savory bites. Another interesting dessert we had was tonyu (soy milk) donut, made fresh as we ordered. For serving, the fried donuts were lightly drizzled with what seemed to be brown sugar liquid and dusted in Japanese soybean flour. It was sweet, but not too much, and at the same time very light – perfect to wrap up our exploration of Nishiki Market. From centuries-old traditional food to modern cuisine, baby octopus to soy milk donuts, Kyoto really spoiled our palates. It was a day well-spent and a few kilograms well-gained. 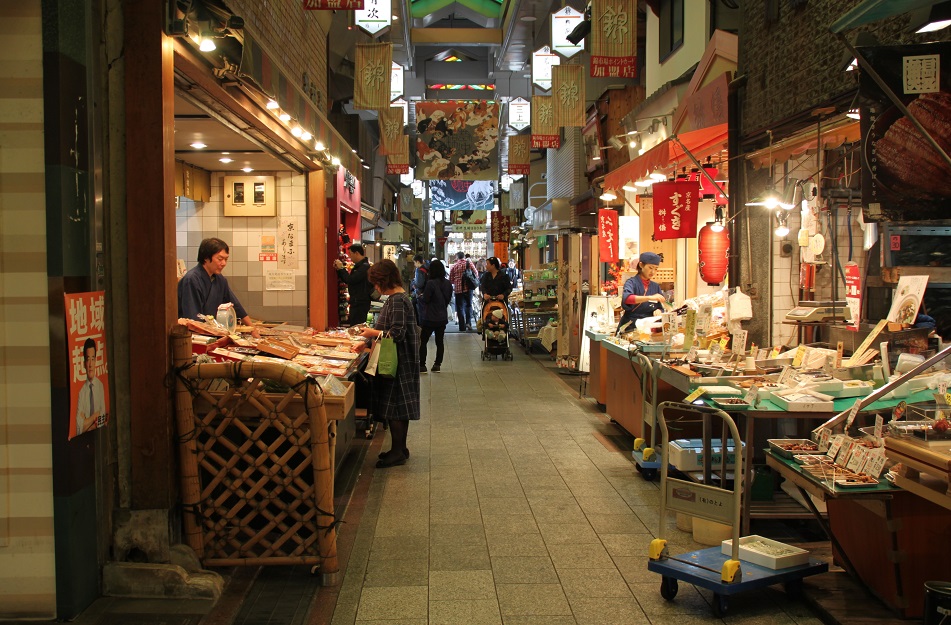 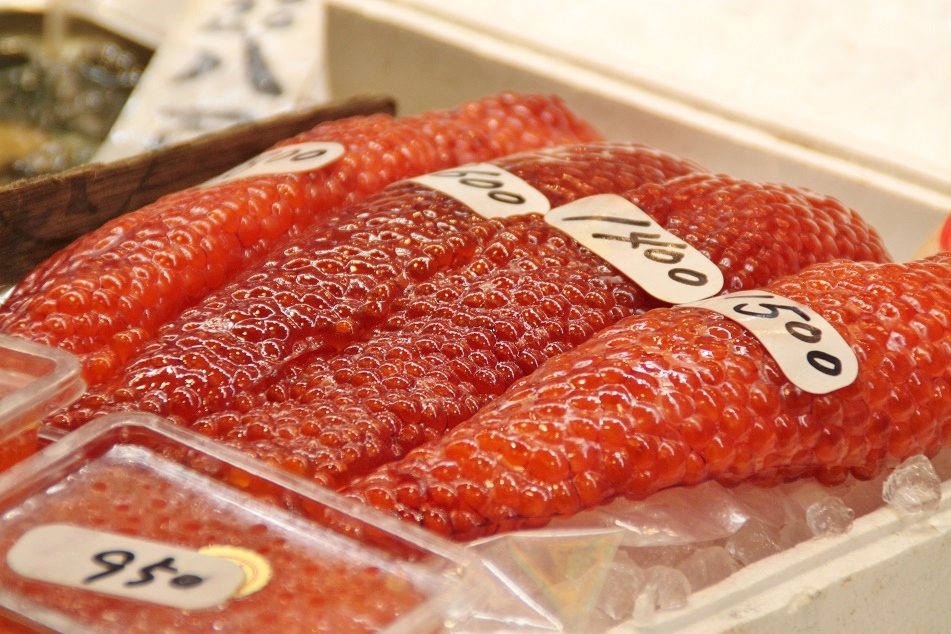 From the Depths of the Sea to Kyoto’s Kitchen 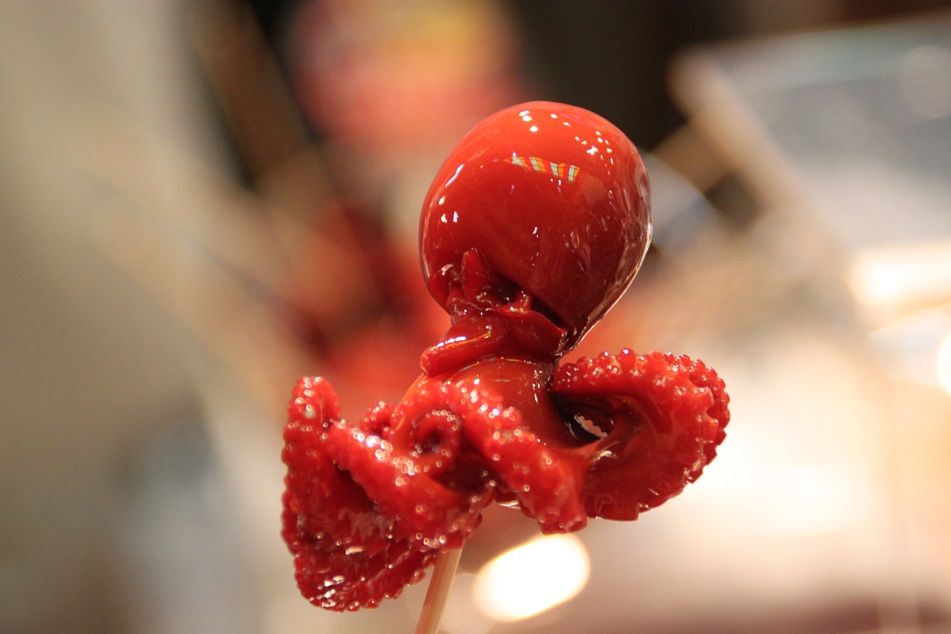 Tako Tamago, One of the Best Snacks I Had at Nishiki Market

A Colony of Stuffed Baby Octopi

Being Able to Read Japanese Would Certainly Help 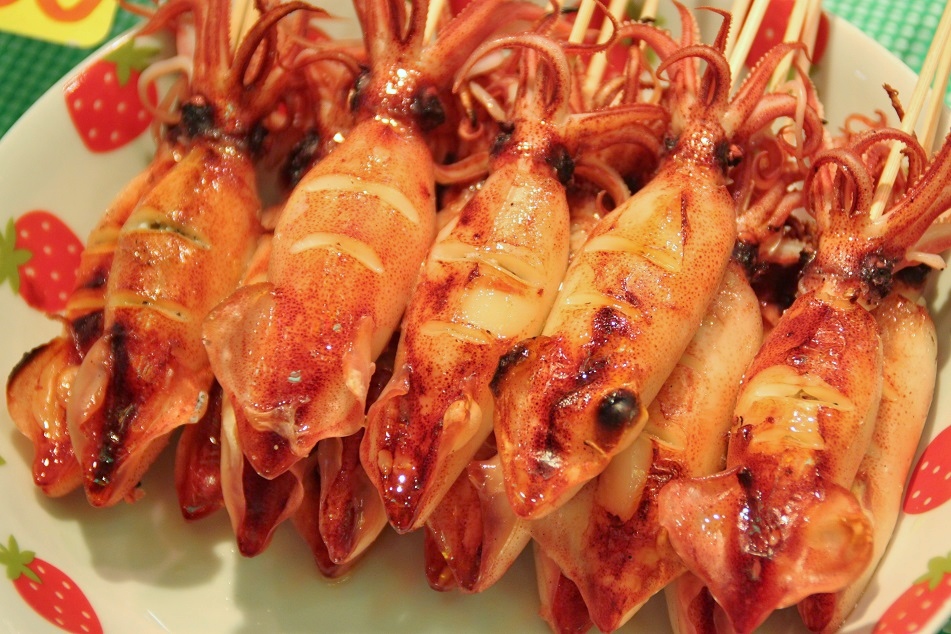 Temptations All Around the Market

Delicious, Albeit A Little Pricey: Unagi no Kimo (Eel Liver) 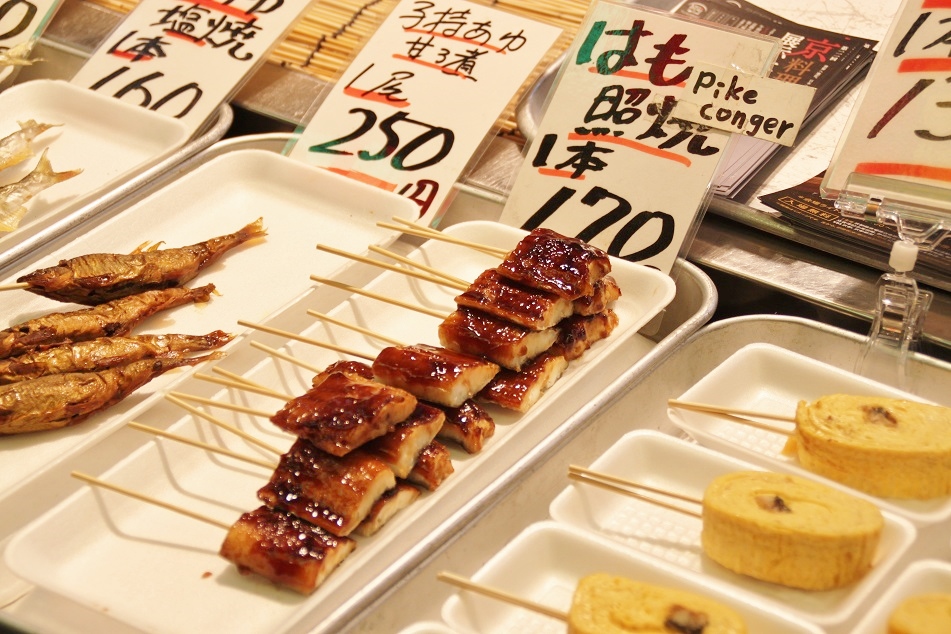 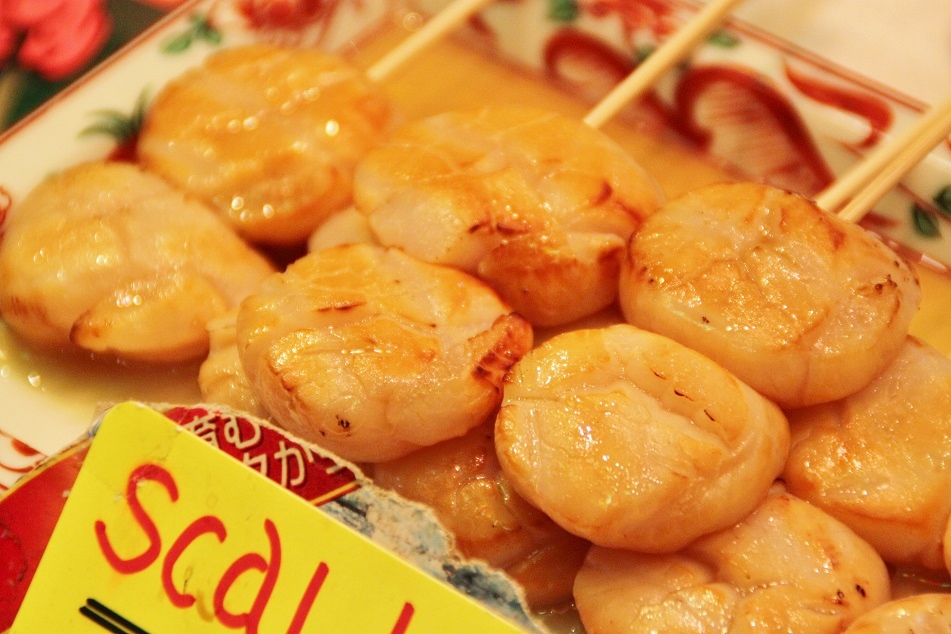 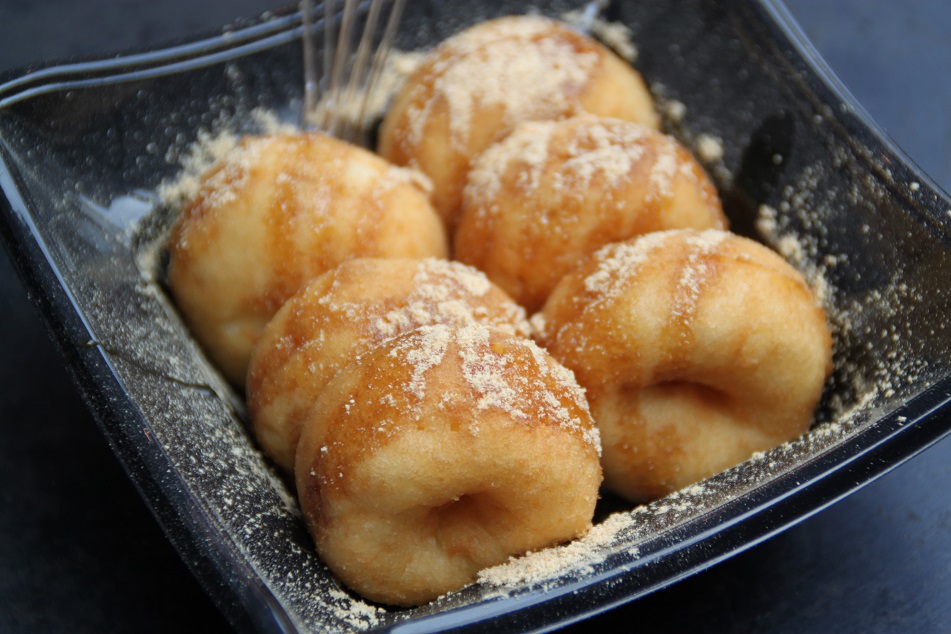 62 thoughts on “Eating Well in Kyoto”