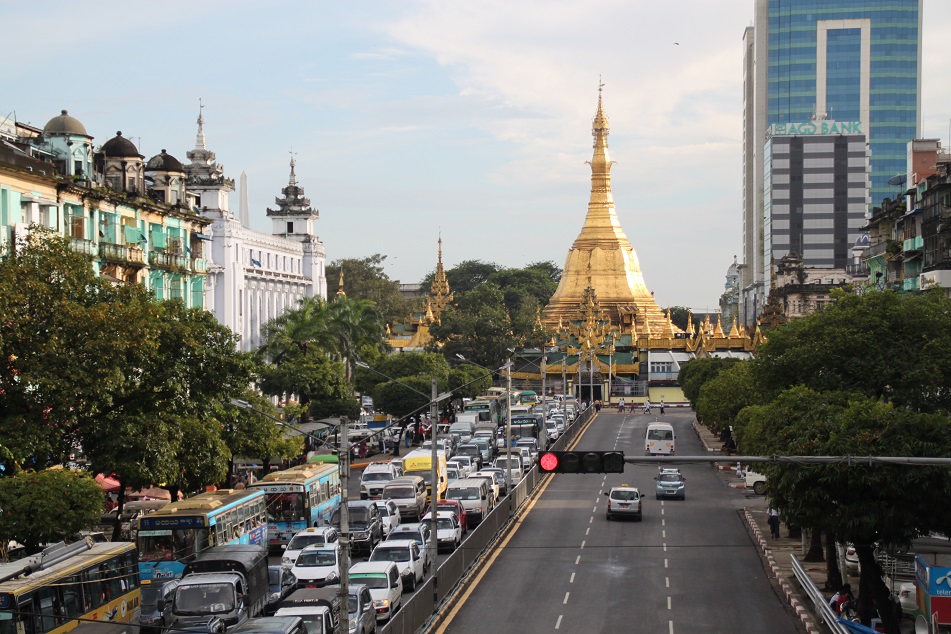 Everything seems so familiar as I step out of the plane that takes me from Bangkok to Yangon. The clean and airy modern airport terminal looks just how I remember it, and the squiggly Burmese script is as mysterious as it is beautiful. The line at the immigration, however, is longer this time. I hand my passport to a young female officer at the counter. She scrutinizes it and asks, “How much did you pay for the e-visa?”

As an Indonesian citizen, I am able to enter Myanmar without a visa for 14 days. But on this trip, we plan to stay in the country for 17 days, hence the e-visa.

“Next time you come, don’t get a visa. If you overstay three days you only pay nine dollars – three dollars per day. Cheaper for you.”

She’s probably the only immigration officer anywhere in the world who actually encourages visitors to overstay. What a strange yet delightful welcome this is.

Three years can be too short to see palpable changes in a city. But three years after my first visit to Yangon the city appears to be experiencing a rapid development never seen in the decades prior to the country’s opening up to the world in 2011. The once outdated domestic terminal has been modernized, old cars are disappearing from the streets, Mercedes-Benz and BMW dealers have opened their first stores in the country, and traffic congestion has become the new normal in some parts of the city.

In January 2012, Yangon still felt like a city-sized time capsule. However, it seems to have embraced capitalism in earnest as investment begins pouring into Myanmar following the lifting of some sanctions imposed on the country by the international community. In 2012, I had to exchange my U.S. dollars to Myanmar kyat at the hotel where I stayed. But three years later, ATMs can easily be found throughout the city, and most of them accept international bank cards, a sign of the country’s fast integration within the world financial system.

Sule Pagoda, One of Yangon’s Most Iconic Landmarks

Yangon City Hall to the Northeast of Sule Pagoda

A Chinthe (Burmese Mythical Creature) in front of the City Hall

A Glistening Beacon in Downtown Yangon

A British Colonial Building to the South of Sule Pagoda

A Restored Historic Building, Formerly A Department Store and Later A Government Office 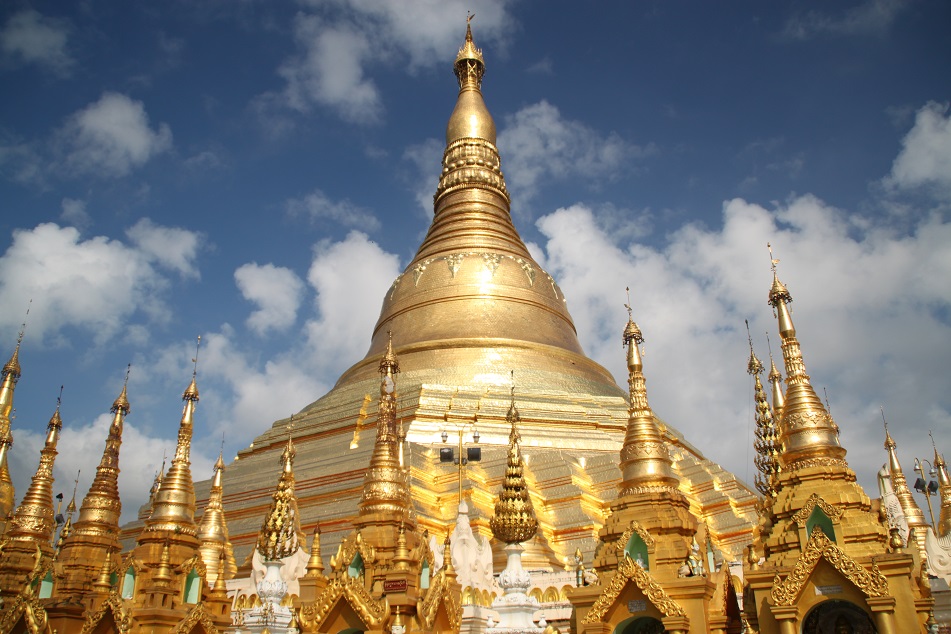 As getting kyat becomes a lot easier, so too is it easier to spend. Foreign companies are quickly tapping into the huge business opportunities the country provides: Myanmar’s first ever KFC store has opened in downtown Yangon; a Malaysia-based department store introduces consumerism to the local people; and Coca-Cola’s first factory in the country produces a thirst-quencher that is otherwise ubiquitous in many parts of the world, but was previously hard to find in Myanmar. In addition, Norway’s Telenor, Qatar’s Ooredoo, and even BNI (one of Indonesia’s largest banks) have also entered the increasingly competitive market.

Scenes of the city’s economic boom quickly dissipate, however, as we walk down 33rd Street, one of many numbered streets in Yangon’s grid plan – a vestige of the British colonial time. We stay in an old but clean hotel on the same street, where from our third-floor room the daily life of ordinary Yangoners unfolds before our eyes: Young monks and nuns go on foot asking for alms, while a family sits cross-legged watching TV in the apartment directly opposite. Towering above everything else is the Sule Shangri-La, previously known as Traders Hotel, as well as cranes working on the construction of a new office building.

At the heart of the grid plan is a gleaming gilded Buddhist stupa called Sule Pagoda. As the focal point of the old part of Yangon, it is one of the most recognizable landmarks of the city – along with the more impressive Shwedagon to the north. Around the pagoda are some of the city’s most well-preserved old edifices, including the City Hall, the former High Court building and smaller British-era structures. Further south, facing the Yangon River, is Strand Road where some of Yangon’s finest colonial gems were erected. This waterfront strip of old “Rangoon” reminds James of Shanghai’s Bund, also home to a collection of impressive European structures.

The unusually large number of colonial buildings in Yangon is the result of two things: the city’s importance as the capital of Burma under British rule and Myanmar’s isolation from the world for decades, which has prevented rampant development from obliterating most of Yangon’s historic buildings. Yangon and other regions in Lower Burma were seized by the British following their victory in the Second Anglo-Burmese War in 1852. Soon afterward, the city’s increasing wealth attracted people from outside Burma, notably from South Asia, to move into Yangon, creating a diverse multicultural scene which is evident to this day.

Hindus, Muslims and Jews came in droves to seek better opportunities in Rangoon – Yangon’s old name. In 1854, Musmeah Yeshua Synagogue was constructed in the Indian quarter of the city, home to immigrant communities, where mosques and Hindu temples were also built. The synagogue not only served Jews coming from India, but also Sephardic Jews from Iraq. Today, however, the number of Jews in Yangon has dwindled to a little over a dozen. Meanwhile, ethnic Indians or South Asians who once made up more than 50% of Yangon’s population during British colonial rule now make up only a fraction of the city’s five million residents.

An Old Building Next to the Famous Strand Hotel

Some of the City’s Remaining Old Buses

A New Japanese Car Passing in front of Bogyoke Market

A Remnant of the British Era in the Indian Quarter

The march toward modernity is inevitable for Yangon and its people. Restriction of access to information has been lifted, free speech is warmly welcomed, foreign visitors numbers have increased exponentially, and businesses flourish. As we explore Sule Paya – the neighborhood around the pagoda – we pass by two cinemas. Back in 2012, both places only played old Hollywood movies, but this time Everest and The Martian are playing – both were released in the U.S. just a few weeks earlier.

A lot of old, rusty coaches have been replaced by second-hand Korean and Japanese buses. They, together with brand-new private cars, create a rather perplexing sight on streets all over the country: most cars have the steering wheel on the right even though Myanmar does not drive on the left. This is a remnant of military junta rule whose leader in 1970, General Ne Win, instructed the country to switch the driving side from the left to the right. No one really knows the reason behind this abrupt change.

A handful of luxury cars are spotted during our four-day stay in Yangon. However, the majority of people still use public transport to commute or go around the city. Men wearing longyi (Burmese traditional sarong) and women daubing thanaka (made from thanaka wood, used as sun screen) on their faces are still a common sight in this rapidly-changing metropolis. Learning from the mistakes of other Asian cities when they razed historic buildings to make way for development, Yangon Heritage Trust was established one year after the country opened up to the world. Its sole objective is to conserve buildings with historical value in the city with the most colonial buildings in Asia.

Car plates and street names are now written in numerals and Latin script, reflecting Myanmar’s openness to change. Nevertheless, the classic problem of a widening wealth gap in developing countries is certain to become a serious issue if preemptive measures are not taken to ensure a just distribution of wealth to the people. I wonder how Yangon will look like three years from now.

A Mosque across from Sule Pagoda 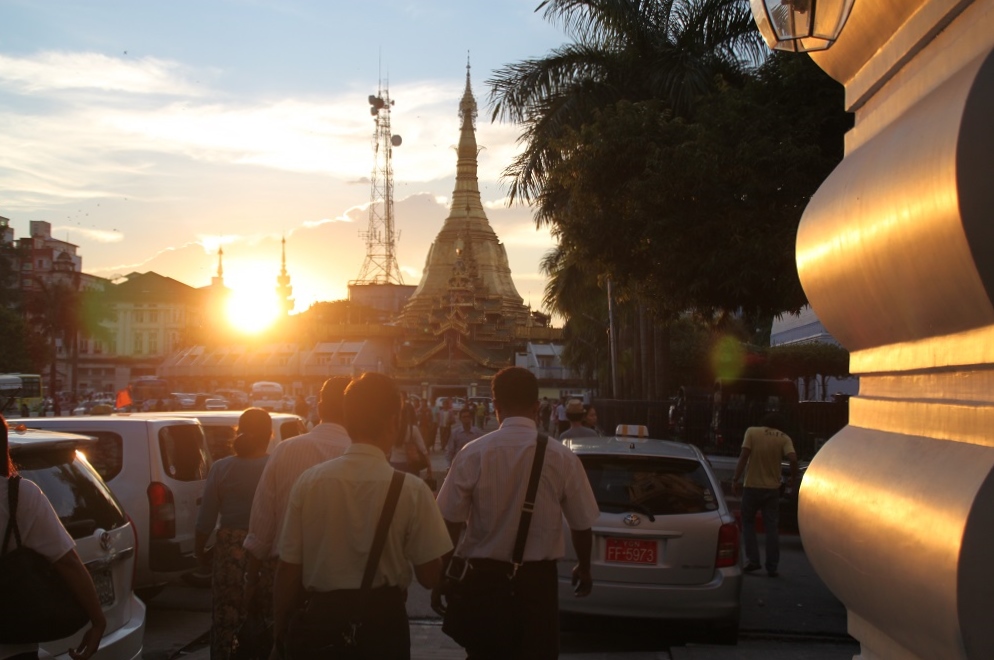 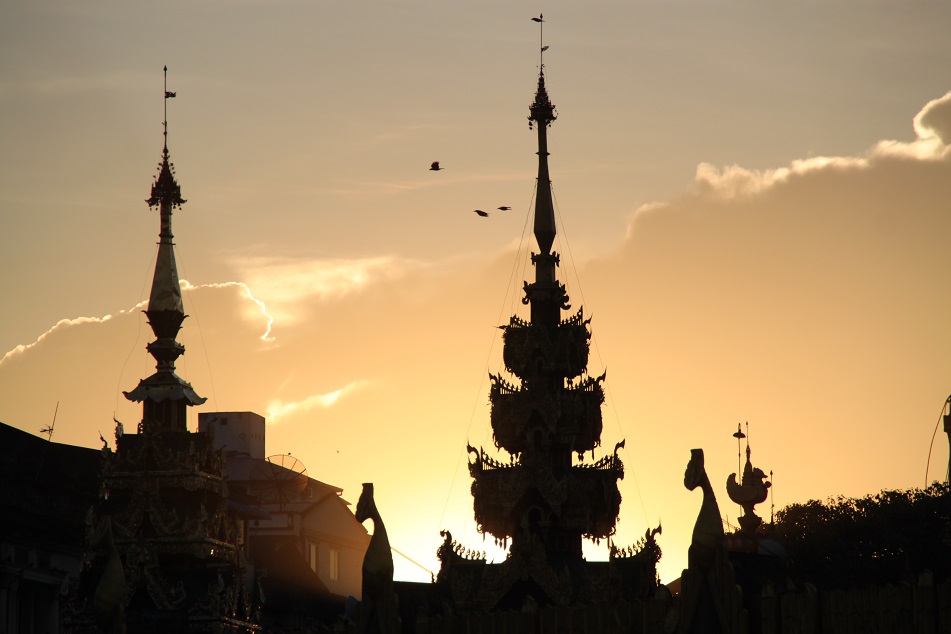 How Will Yangon Look Like Three Years from Now?