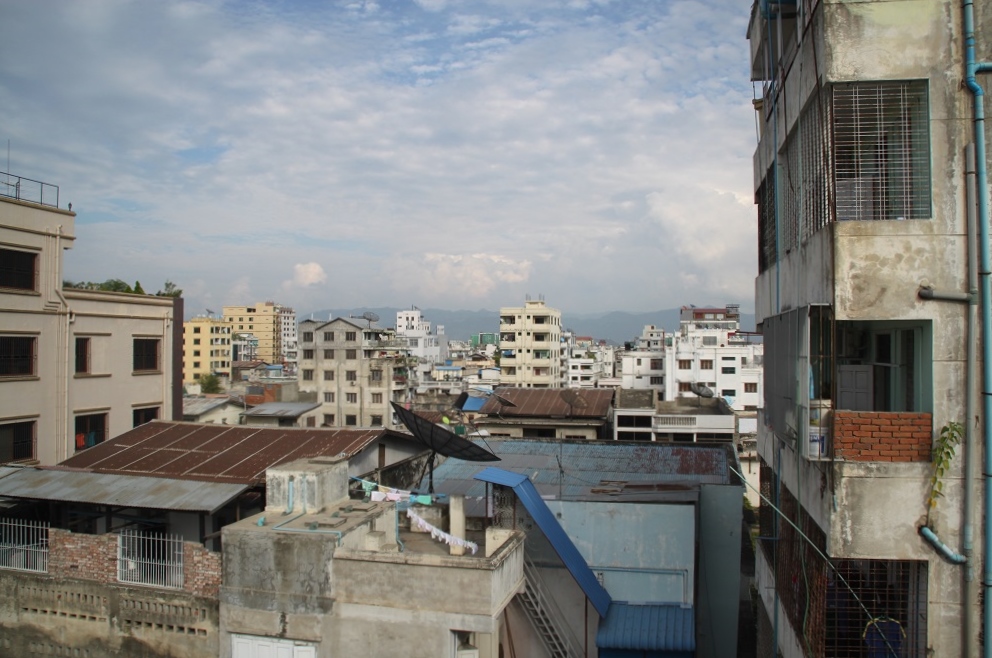 Mandalay as Seen from Our Hotel

Myanmar, formerly known as Burma, is a land that gave birth to great kings who ruled some of the mightiest empires in the history of Southeast Asia. Anawrahta established the first Burmese empire in the 11th century, a regional power that would last for more than two centuries. Today the surviving remnants of the Pagan Empire are scattered all over the plains of Bagan. In the 18th century, more than four centuries after the demise of the empire and a time when European powers began exerting their dominance in Asia, a new dynasty was founded by Alaungpaya. From the village of Shwebo, he organized a resistance movement against the French- and British-backed Hanthawaddy kingdom.

Following the victory of Konbaung – the new dynasty – over Hanthawaddy, Alaungpaya reunified Burma and ruled his kingdom from the very village he was once chief. However, upon his death eight years after the establishment of the dynasty, the capital of the kingdom was moved much closer to the Ayeyarwady (Irrawaddy) river, to the city of Sagaing. For over a century, due to religious and political reasons, successive Konbaung kings moved the capital to several other places within a 10 km of radius of the river bend. From Sagaing the palace was moved to Ava across the river, then to Amarapura to the northeast of Ava which served as the kingdom’s capital until 1859.

In 1853, a new king ascended the throne. Mindon replaced his half-brother, Pagan, who lost the Second Anglo-Burmese War a year earlier, resulting in the annexation of Lower Burma by the British. The new king spurred nationwide modernization by sending Burmese scholars to Europe to learn about state administration and economic management. Reforms were made soon afterward, encompassing multiple aspects within the kingdom, including the judicial system, trade, armed forces, bureaucracy and taxation. All of this were done partly to counter the increasing threat imposed by the British to the south.

Four years since becoming the king of Burma, King Mindon commissioned the construction of a new palace in Mandalay, directly to the north of Amarapura. However, as his kingdom had not completely recovered from the loss in the war against the British, instead of building an entirely new palace, Mindon ordered the old palace in Amarapura to be dismantled and transported to Mandalay – the new capital – where it would then be reassembled. One of the sections of the old palace was eventually moved to what is now known as Shwenandaw monastery. It initially occupied the northern part of the new palace’s main structure – also called the Glass Palace – where King Mindon and Thibaw, his son and successor, lived. But the latter relocated the monastery to a place outside the moat-surrounded palace compound because he believed it was haunted by his father’s spirit after his death.

From his palace in Mandalay, King Thibaw ruled the kingdom for only seven years, from 1878 until 1885, when he was defeated in the Third Anglo-Burmese War. It is an event remembered in Burmese history as the end of centuries of Burmese monarchies, with the Konbaungs the very last dynasty to have ever ruled the country. Burma was then absorbed into the British Raj and officially became a province of India. The palace in Mandalay was looted by the British, and the royal library burned down. 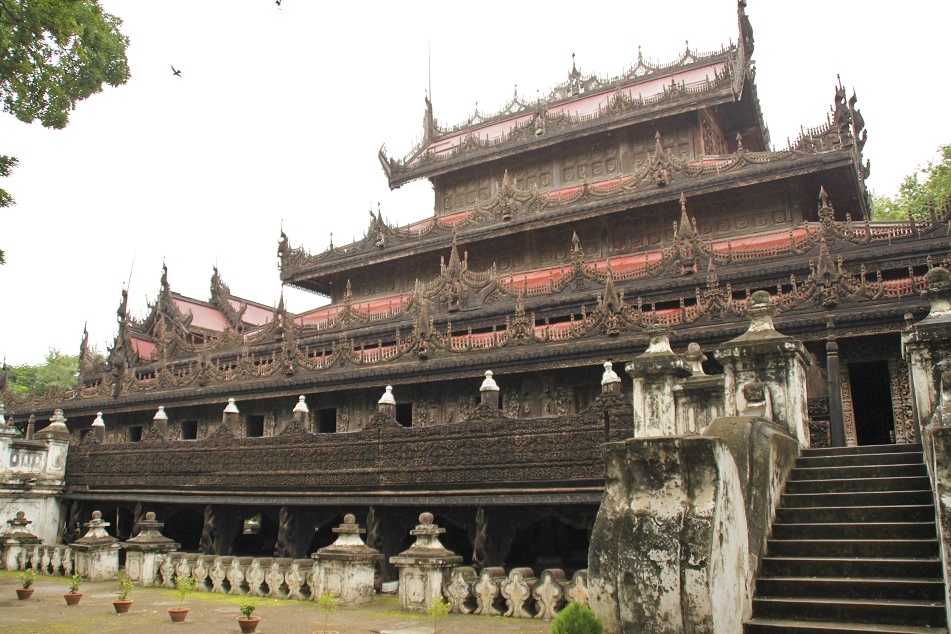 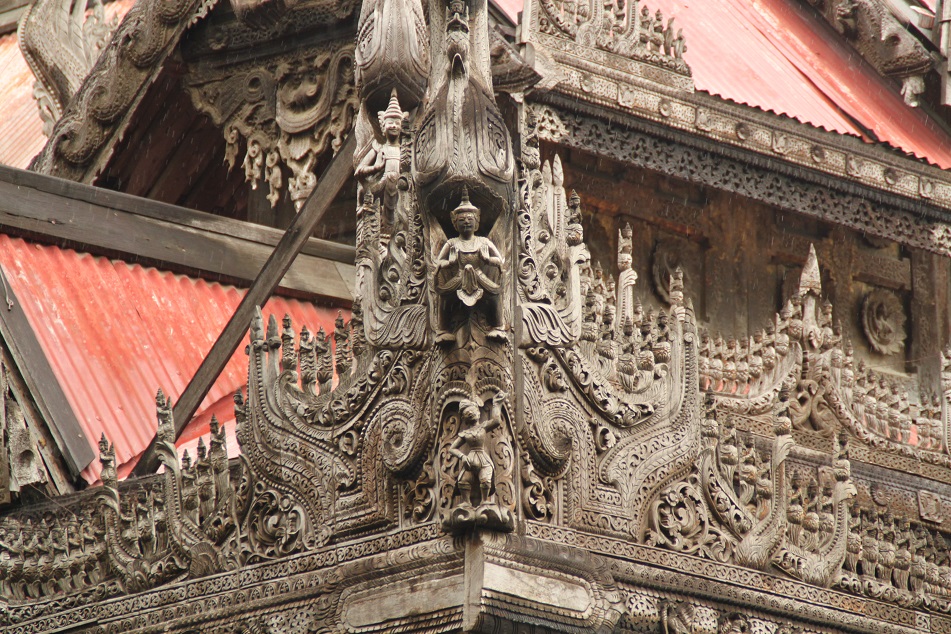 Once Part of the Royal Palace 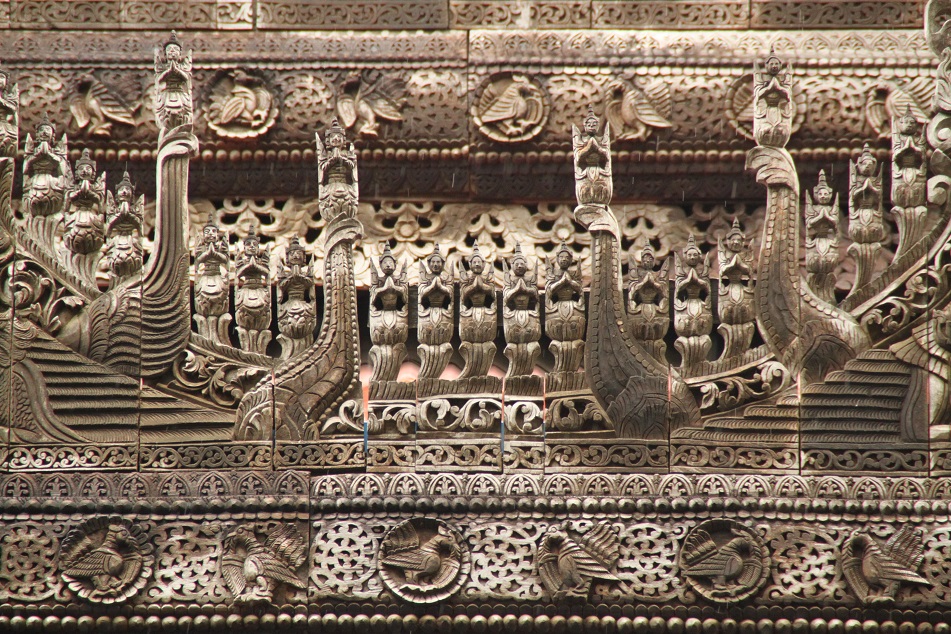 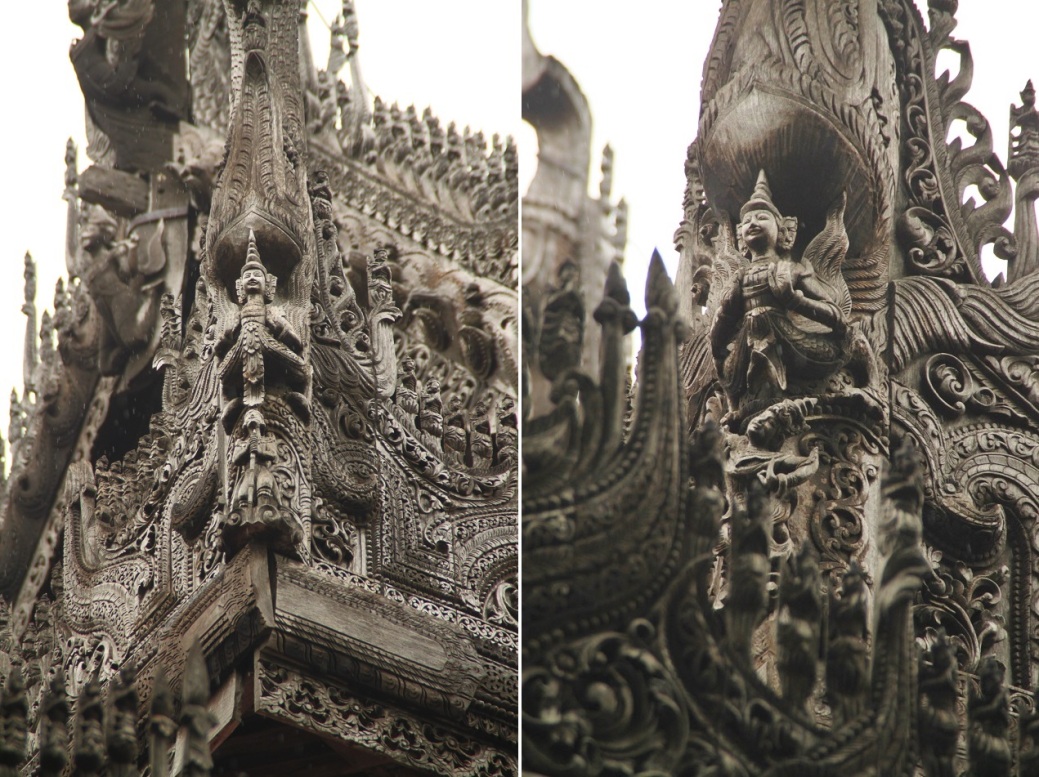 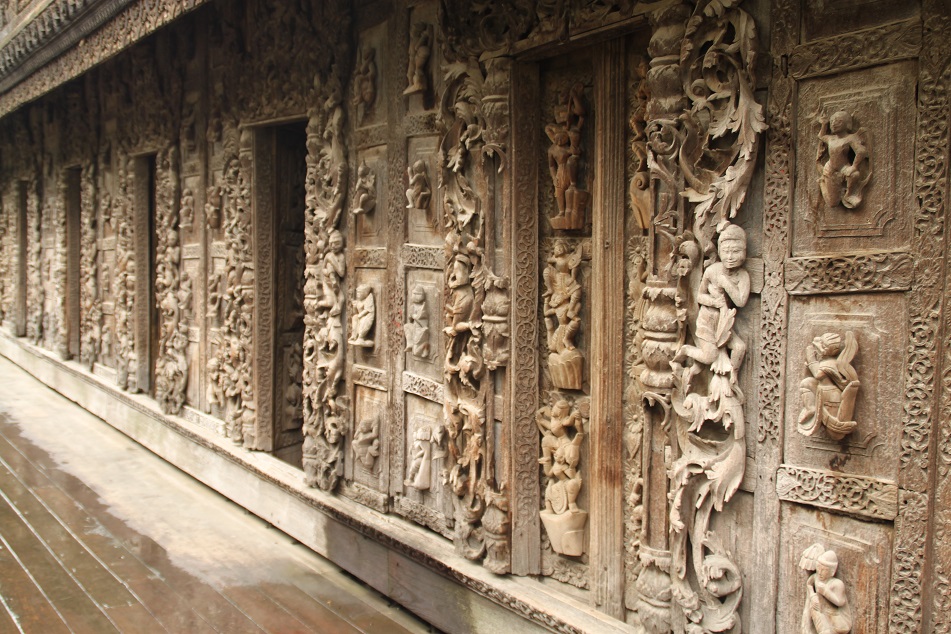 Wood Carvings on the Outer Wall of the Monastery

Carved Floral Patterns on the Ceiling 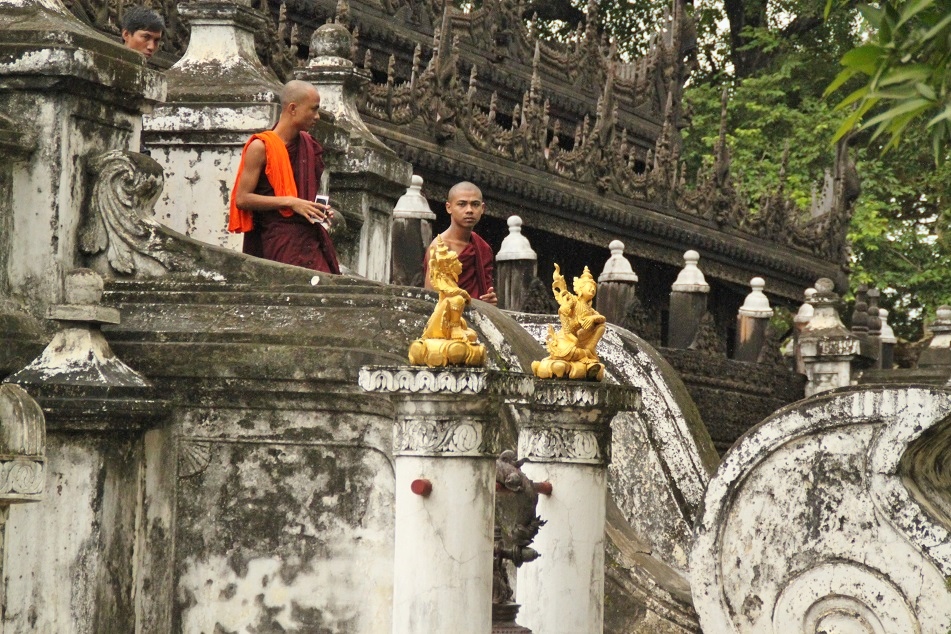 A Curious Monk and His Friend with A Mobile Phone, A Relatively New Thing in Myanmar

Devotees at the Glass-Embellished Pagoda

The Reconstructed Mandalay Palace on A Rainy Day

During World War II, the Japanese took control of Mandalay and other parts of Burma from the British, and the strategically-located citadel of the former palace in the city was turned into a supply depot. However, as the Allied forces struck back to regain their colonies, they bombed the citadel and everything within its vicinity, sparing only the royal mint and the watch tower. Thanks to the unexpected relocation of Shwenandaw monastery out of the palace decades earlier, it survived the bombings and now stands elegantly in a neighborhood to the northeast of the former palace grounds.

Restoration work on the former royal palace in Mandalay began in 1989, the same year when the military junta changed the name of the country from Burma to Myanmar. As the junta was dissolved in 2011, opening a pathway to much-needed democratic reforms in the country, places all over Myanmar, including Mandalay, began receiving foreign tourists in droves.

At first sight, Mandalay is devoid of the impressive colonial buildings that line the streets of Yangon. Instead, uninspiring multi-story residential buildings and shops dominate the skyline. The overall atmosphere of the city in a way reminds me of Medan, Indonesia’s fourth-largest city with rough edges and unforgiving drivers. We have probably been spoiled after seeing some of Myanmar’s most inspiring ancient sites a week earlier. However, our not-so-positive impression of Mandalay is quickly redeemed by the dishes we sample, including the best mohinga (rice noodles in fish soup served with boiled egg and fritters, considered the national dish of Myanmar) I’ve ever tried, as well as se pe oo thoke made from sliced tomatoes, onion and garlic, mixed with translucent preserved eggs (also known as century egg). On the street, one particular stall tended by a husband and wife sells a type of snack typically served at festivals. Indeed, our visit to Mandalay has coincided with the full moon of Thadingyut, marking the end of Buddhist lent. Called molimiya, the half-dome fried snack poetically signifies a couple as two halves that are served together.

Mandalay may not be our favorite place in Myanmar, but the mohinga we enjoy is enough reason for me to consider a second visit in the future. Soon the city’s skyline might forever change with the addition of even taller buildings. But to the south, along the banks of the mighty Ayeyarwady, the vestiges of the nation’s last dynasty will hopefully be forever left in peace. 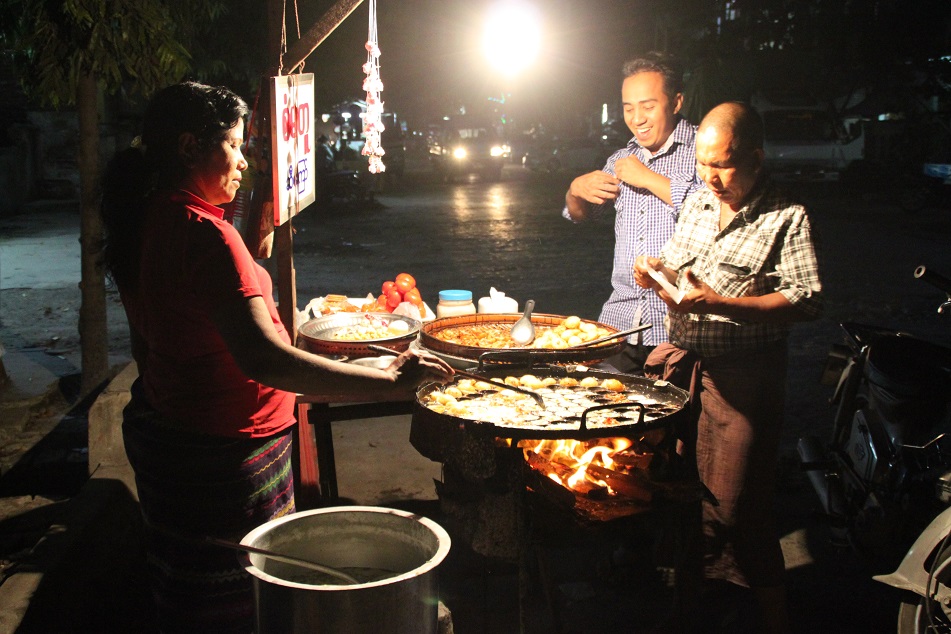 Frying the Half-Domes in A Hot Griddle

The Best Mohinga I Have Ever Tasted

The Flag of the National League for Democracy (NLD), A Forbidden Symbol Before 2011

46 thoughts on “Mandalay and the Last Burmese Kingdom”