In Mainland Southeast Asia, Ayutthaya was one of the most powerful kingdoms the region had ever seen. Established in the 14th century in what is now Thailand, it lasted for more than four centuries until its rival to the west – the Burmese – sacked the capital in the 18th century, effectively bringing the Thai kingdom to its demise. One year later, a general of the former Ayutthaya kingdom by the name of Taksin successfully retook Thonburi on the western bank of Chao Phraya River and soon founded a new kingdom with himself pronounced king.

However, fourteen years after ascending the throne, his kingdom fell into chaos following a coup as a result of his increasingly authoritarian rule. His general, Chao Phraya Chakri – later known as Phuttayotfa Chulalok – who at that time was fighting rebels in Cambodia, returned to the capital to restore order. After successfully usurping the throne, the general then established a new dynasty – the Chakri dynasty – and was addressed as King Rama I. Since then the Chakris have been ruling the country with Vajiralongkorn (King Rama X) its current king after ascending the throne last year following the death of his father, the highly popular Bhumibol Adulyadej (King Rama IX).

Soon after becoming a king, Rama I moved the capital of his kingdom from Thonburi to Rattanakosin Island across the river – both are now parts of modern Bangkok. On the island, he commissioned the construction of the Grand Palace compound which included Wat Phra Kaew, the most revered Buddhist temple in Thailand. After its completion, the temple became home to the Emerald Buddha, an image of of the Buddha believed to bring prosperity and pre-eminence to the country in which it resides. The Emerald Buddha was once housed in Haw Phra Kaew in Vientiane for more than 200 years until Chao Phraya Chakri claimed it upon his victory against Lan Xang (modern-day Laos). He then transported the image to the heart of Siam, and after becoming king, he moved it to the newly-constructed Wat Phra Kaew.

Entering the 19th century, Asia became hotly contested among the Europeans as their influence and economic dominance grew following their success in imposing monopolies on the trade of spices and other commodities in the region. By the mid-19th century, King Mongkut (Rama IV) ascended the throne of Siam, a vast kingdom with lands comprising what is today Thailand, the Shan State of Myanmar, Laos, Cambodia, Southern Vietnam, and Northern Malaysia. However, at the same time the British had already conquered Lower Burma including Yangon (Rangoon) and were about to take full control of Upper Burma as well. Meanwhile to the east, in what is today Central and Northern Vietnam, the French began consolidating their power and strengthened their presence. 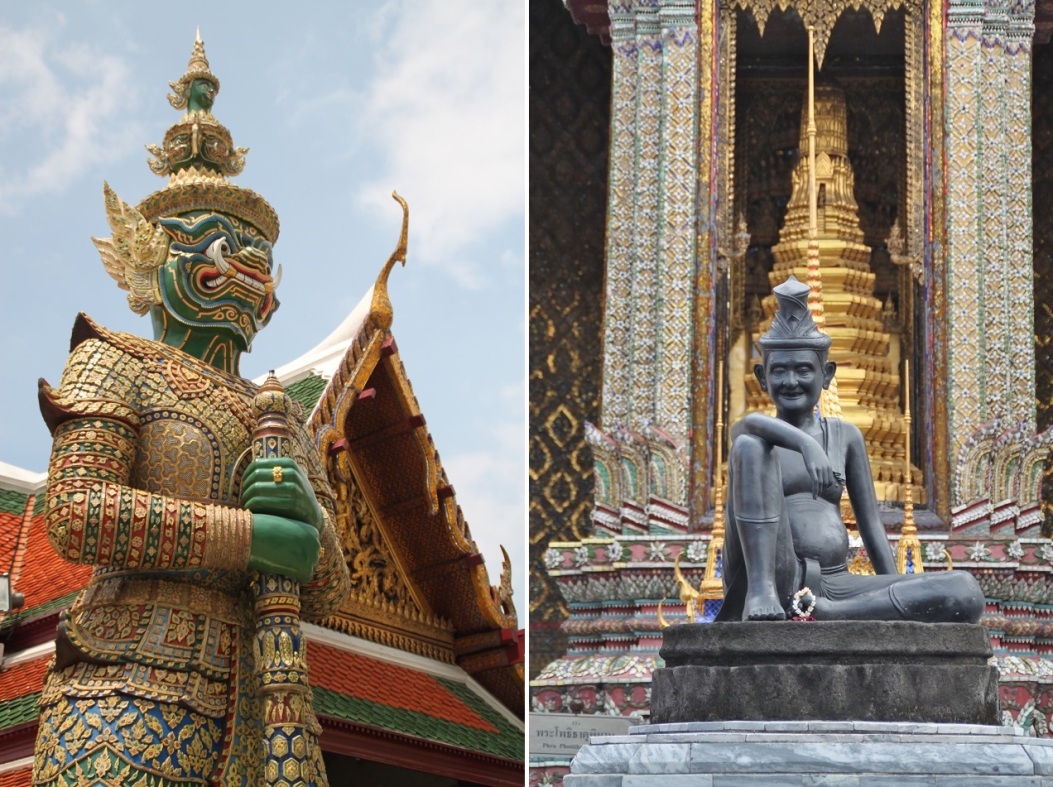 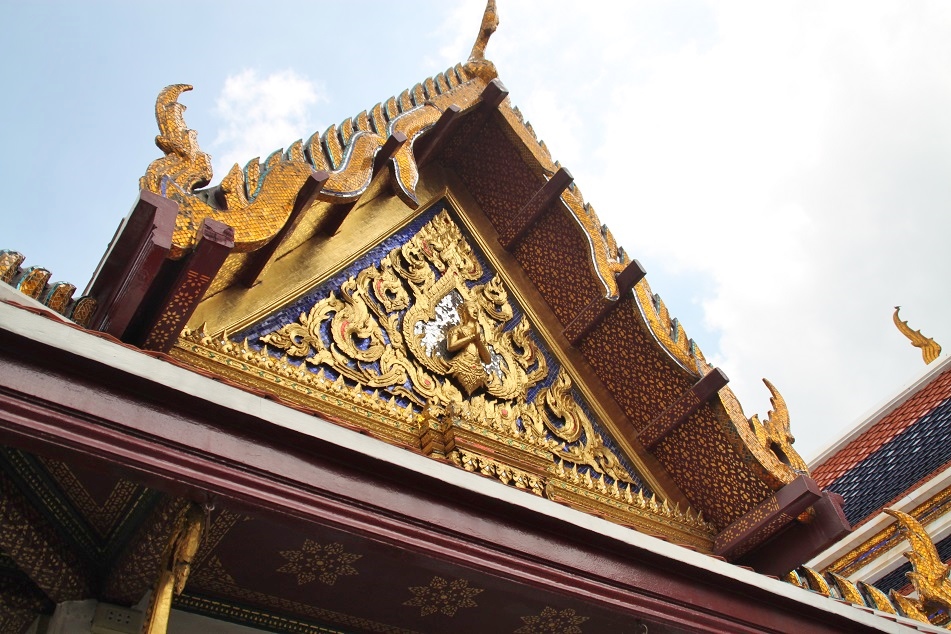 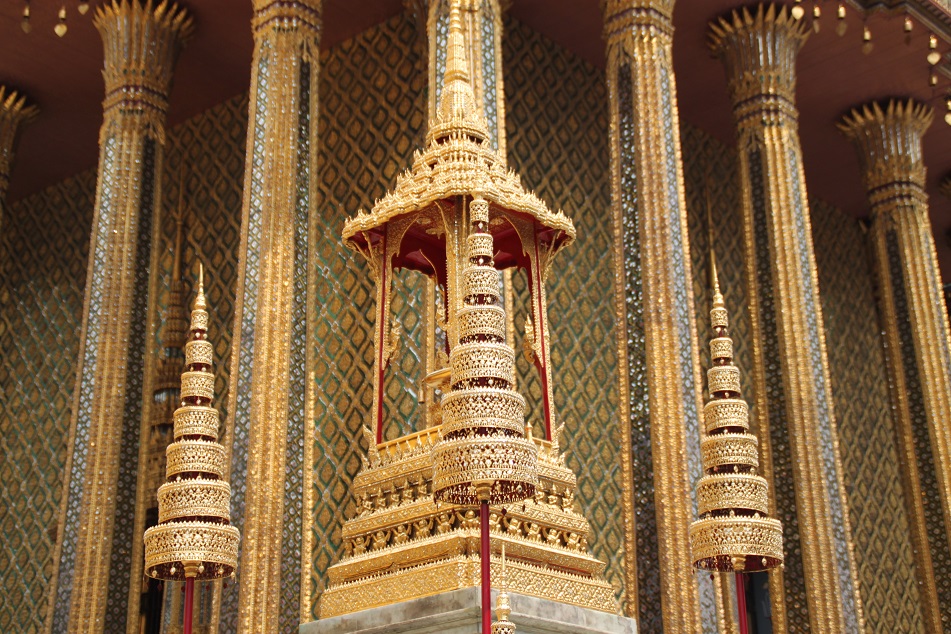 A Monument Housing the Insignia of the Late King Rama IX 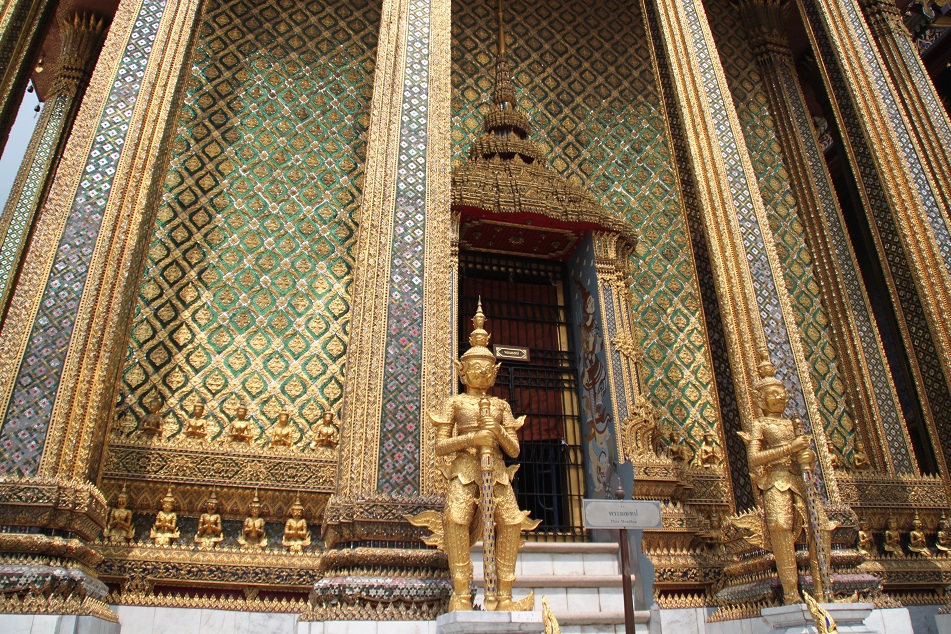 Statue of the Buddha in Borobudur Style

Yakshas (Protector of Treasures) at the Foot of the Golden Chedi

Floral Motifs and Nagas (Mythical Dragons) in the Grand Palace

The Emerald Buddha Lies Underneath These Exuberant Colors 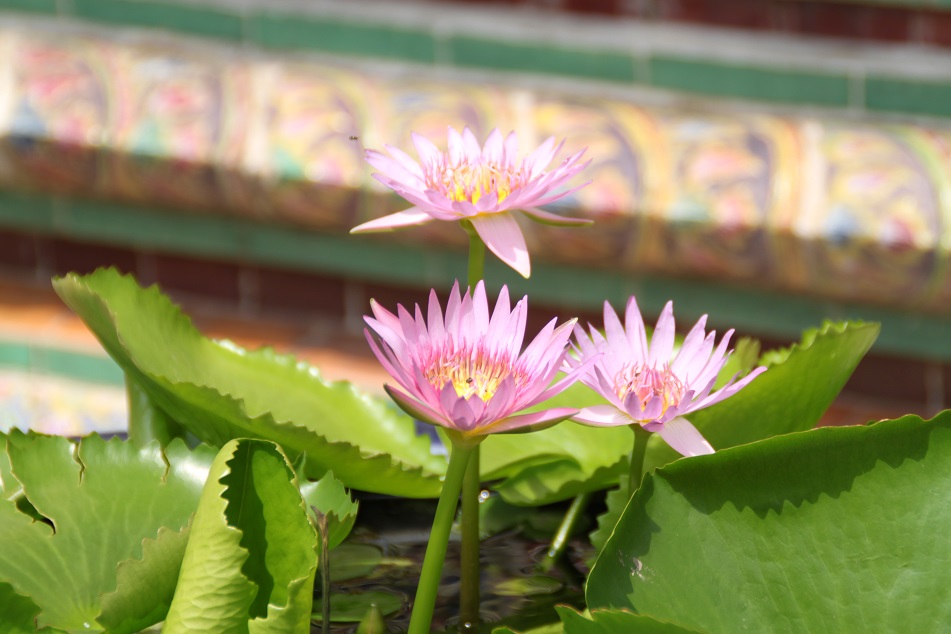 As Rama IV was pressured by the European powers next door, he relented to British demands for the abolition of a state monopoly in several commodities, as well as tax reductions for trading with foreign countries. The king’s concern was rather justified as the British by then had conquered lands from what is now Pakistan all the way to Burma – the latter being the very nation that ransacked Ayutthaya a century earlier. However, King Mongkut’s successor, Chulalongkorn (Rama V), who ascended the throne in 1868, faced even greater pressure both from the British and the French. During his reign, the British seized the Shan states and incorporated them into British Burma, while the French – who had taken control of Southern Vietnam during Rama IV’s rule – further expanded their colonial territory to include most of modern-day Laos and Cambodia.

Following their gains, the French made an offer to the British to divide Siam in two: all land west of the Chao Phraya River would become British and the east French. The British, however, were reluctant and insisted on making Siam a buffer zone between their vast colonial empire and French Indochina. In 1896, the two powers finally agreed not to colonize Siam, although that didn’t stop the two from encroaching a little further into Siam’s territory.

In a bid to prevent his nation from being colonized, Rama V implemented bureaucratic and societal reforms. He also decided to relinquish Siam’s control over non-Thai lands, ceding Lao-speaking and Khmer-speaking lands to the French, and Malay-speaking regions (which now make up the northern Malaysian states of Kedah, Kelantan, Perlis and Terengganu) to the British, in addition to the Shan states which were conquered earlier. By doing so, he was able to keep the Thai-speaking heartlands of Siam independent. 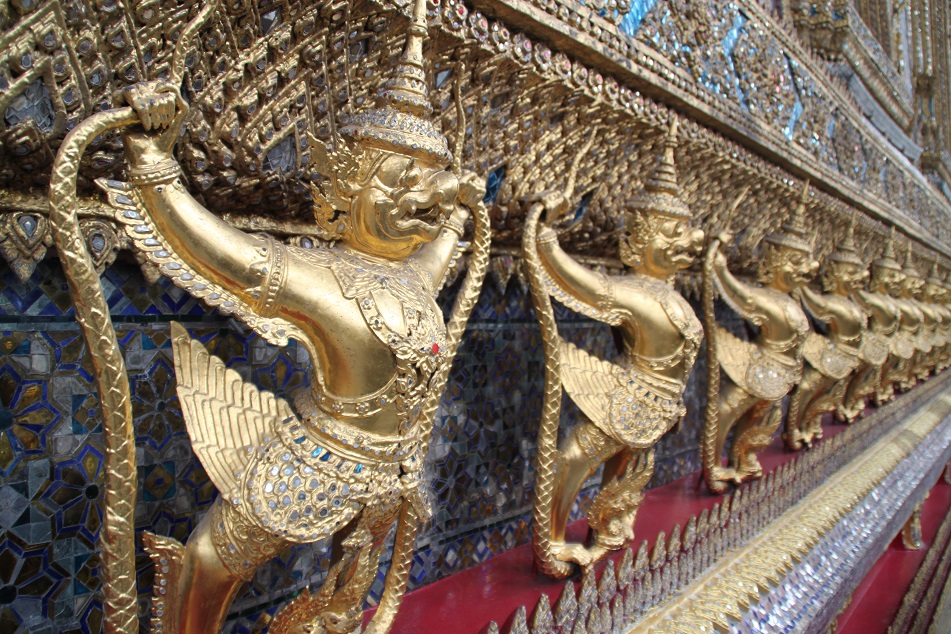 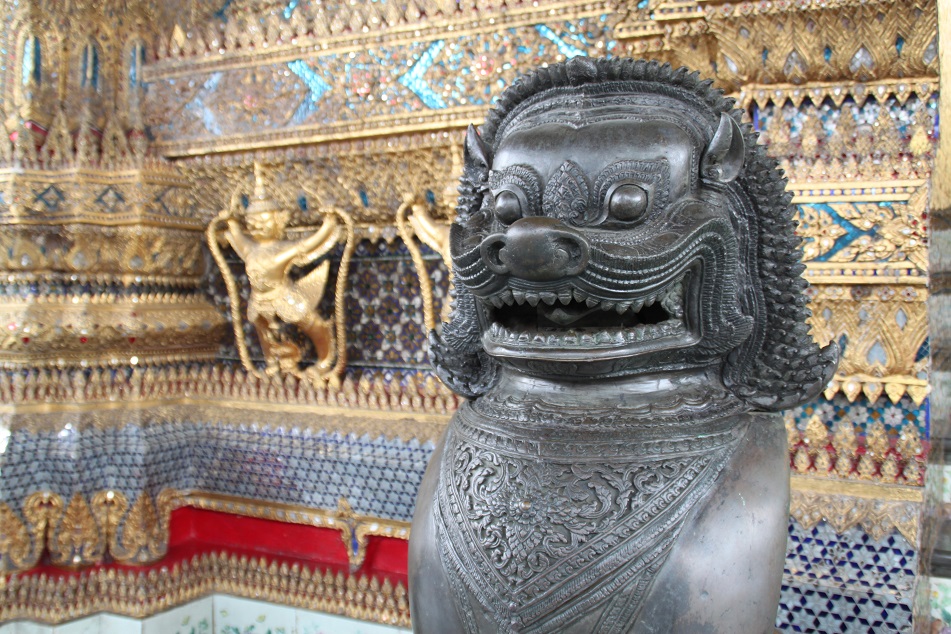 A Guardian Lion at the Entrance of the Sanctum

A Pavilion Next to Chakri Maha Prasat, the Largest Hall in the Grand Palace 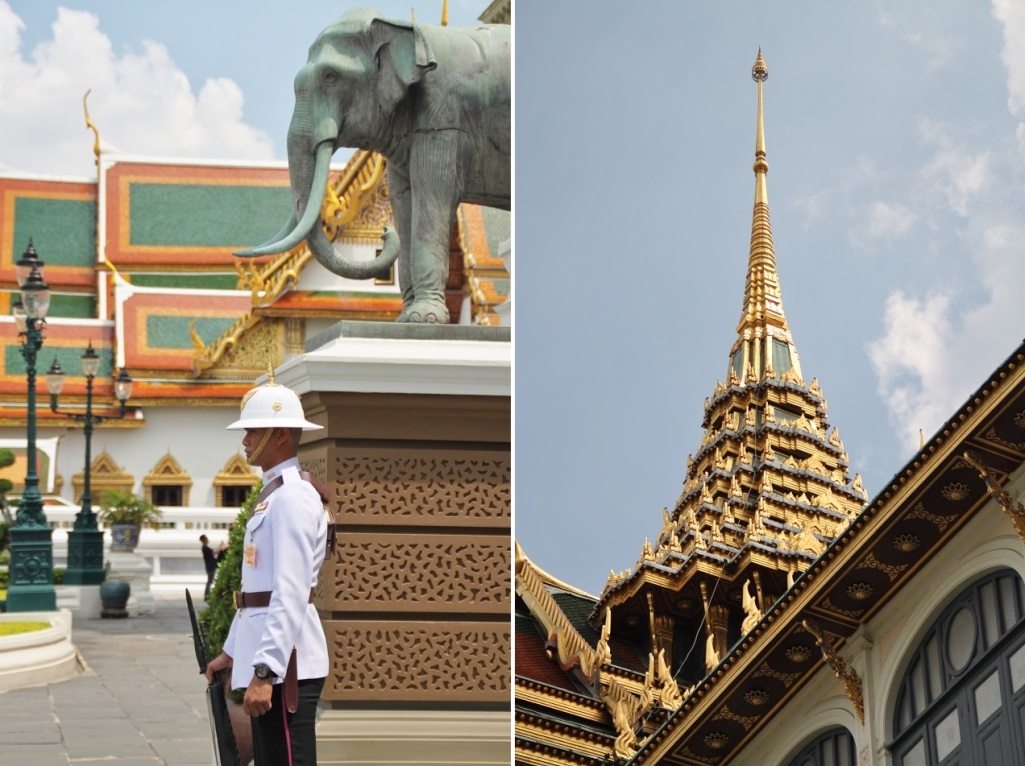 Staring at the Mortals, Reaching for the Sky 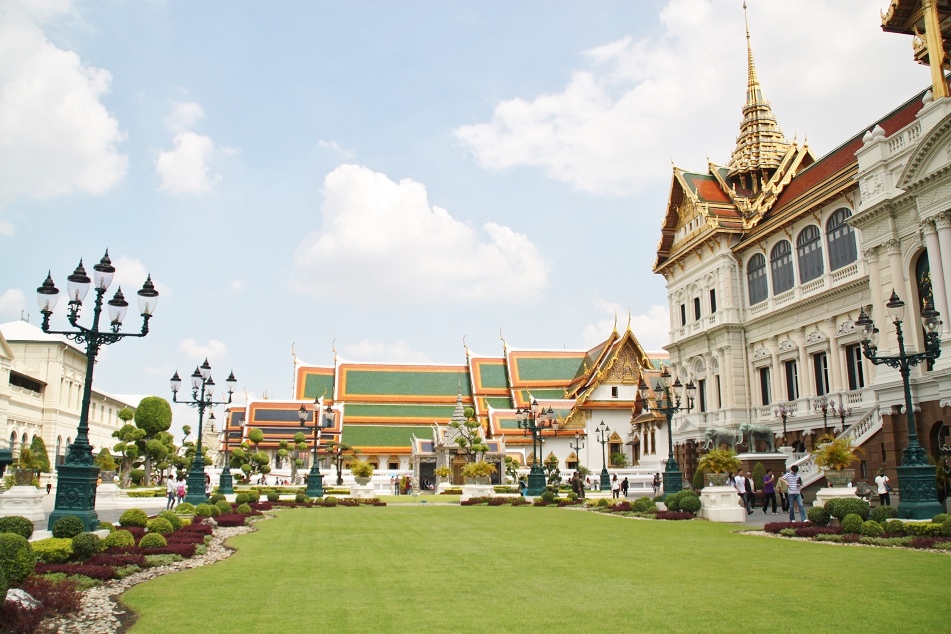 Today, Thais are not just proud of the fact that their country was the only one in Southeast Asia never colonized by the Europeans, but also of their kings, particularly the much-loved late King Bhumibol Adulyadej. Since changing their system from an absolute monarchy into a constitutional one in 1932, Thai kings only assume ceremonial functions. Nevertheless, Thais always sought guidance from their kings whenever political turmoil emerged – the last one in 2014 was the country’s 12th occasion since the introduction of the constitutional monarchy system.

Bangkok itself is now one of the most cosmopolitan cities in Asia, known for its beautiful Buddhist temples, thriving economy, and vibrant nightlife. In Silom, a sub-district of the city where we stay, our hostel is hidden in an alley amid an eclectic neighborhood consisting of five-star hotels, street food stalls, trinket sellers, a Tamil Hindu temple and a mosque. So lively and open, like the Thai people themselves.

More than 1 km to the southwest of our hostel is Sathorn (Sathon) pier, the location of one of the multiple bombings that struck Bangkok in August 2015. It is where we embark on a short river cruise that takes us upstream on the Chao Phraya. A few European buildings line the riverbanks, a reminder of a time when European rivals flocked to Bangkok on a mission to exert influence on Siam. But as we all now know, the Thais were successful in maintaining their independence by relinquishing territories they once conquered. Was it in the best interest of the Khmer, Lao, Shan and Malay peoples? It depends on who you ask.

An Eclectic Neighborhood in Silom

A Resident Squirrel Outside the Grand Palace

The Bangkok Skyline as Seen from Our Hostel

35 thoughts on “Bangkok and the Anglo-French Tug of War”