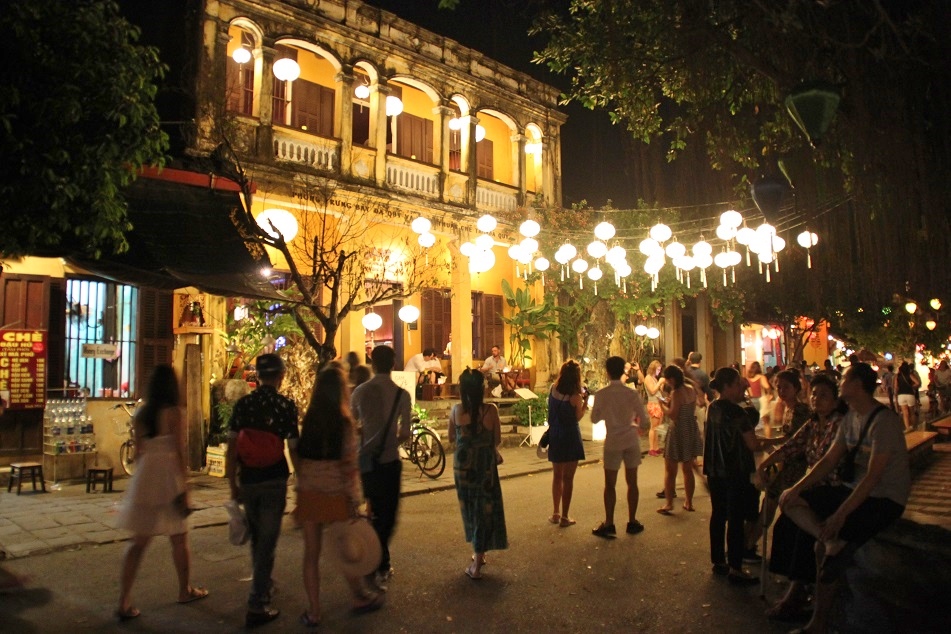 Four hours after leaving the onetime imperial capital of Hue, we arrived at the outskirts of our final destination in central Vietnam. The pockmarked roads were quite a contrast to the smooth streets of Da Nang, the country’s third largest city. We were in fact just a few minutes away from the center of Hoi An, a former trading post whose glory days had passed several centuries ago. I had imagined Hoi An to have a similar ambiance with Luang Prabang, a charming and peaceful small city in Laos with an old town district dotted with temples built in traditional architectural style and handsome colonial buildings. However, only after we entered the historical center of Hoi An did I realize how much busier the city is.

Visiting Hoi An was an idea from James, my perennial travel buddy who has a deep interest in colonial architecture and heritage, as well as old trading ports and forts. While the city’s proximity to the ancient ruins of My Son was the main reason for me to stay there, I kept my expectations of Hoi An low for I knew it has become a popular place among tourists these days. On our first night, we walked down the narrow streets lined with pretty old buildings – many of them turned into boutiques and restaurants – a vibrant streetscape festooned with colorful traditional lanterns overhead, all the way to the most iconic landmark of the city: the Japanese covered bridge.

Despite its modest size, the centuries-old bridge was a sight to behold. Every single part of it was illuminated: its stone piers in bright green, while the rest of the structure in more natural warm light. The calm water underneath, a tributary of the Thu Bon River, mirrored the tableau of light above its surface. Moments later, a small boat emerged out of the darkness and slowly glided toward the bridge, rippling through the otherwise placid canal. A couple donning Vietnamese wedding costumes tried their best to strike romantic poses at the behest of the photographer. Between the love birds and the man with a huge camera, dozens of candles – each placed inside a small container – were waiting to be released into the river.

Hoi An’s romantic ambiance didn’t end there. We strolled across the river, via a bridge packed with tourists, each and every one of them trying to capture the city’s low-rise skyline peppered with twinkling street lights, lanterns, and those coming from the riverside restaurants and shops. Some people chose to sit on the river banks, enjoying the beautiful reflections of the city on the water where tiny red specks of candles slowly floated away to the open sea. Hoi An’s waterfront promenade at dusk is an atmospheric place to wander around, to people-watch, or simply to contemplate, for its beauty and tranquility can either recharge or soothe one’s mind and body. Surely it had the same effect on my mind, although to me recharging wouldn’t mean anything without good food. So off we went to the city’s market filled with food stalls with a broad selection of hearty Vietnamese dishes in a no-frills setting. 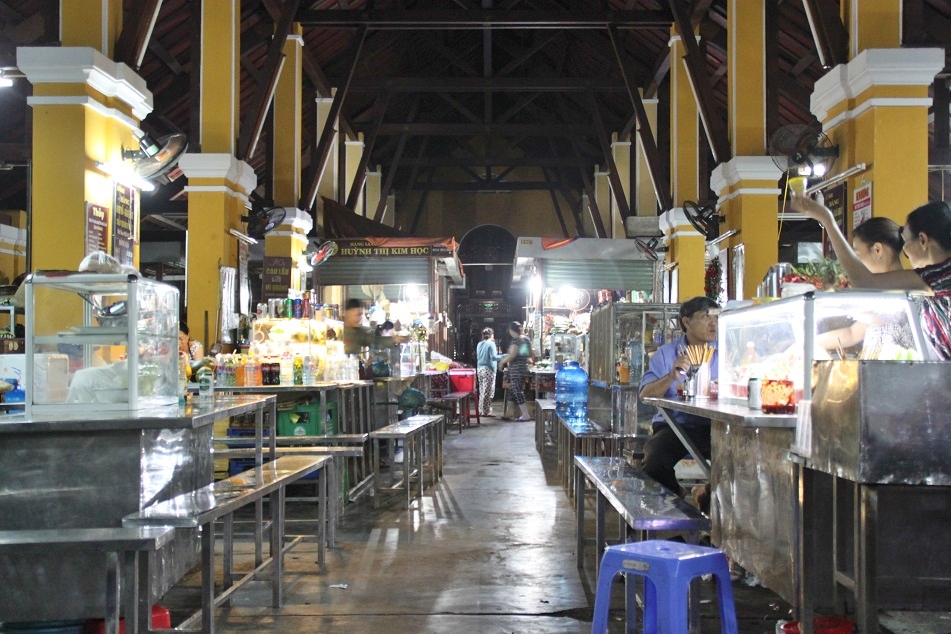 Pick A Stall for Dinner 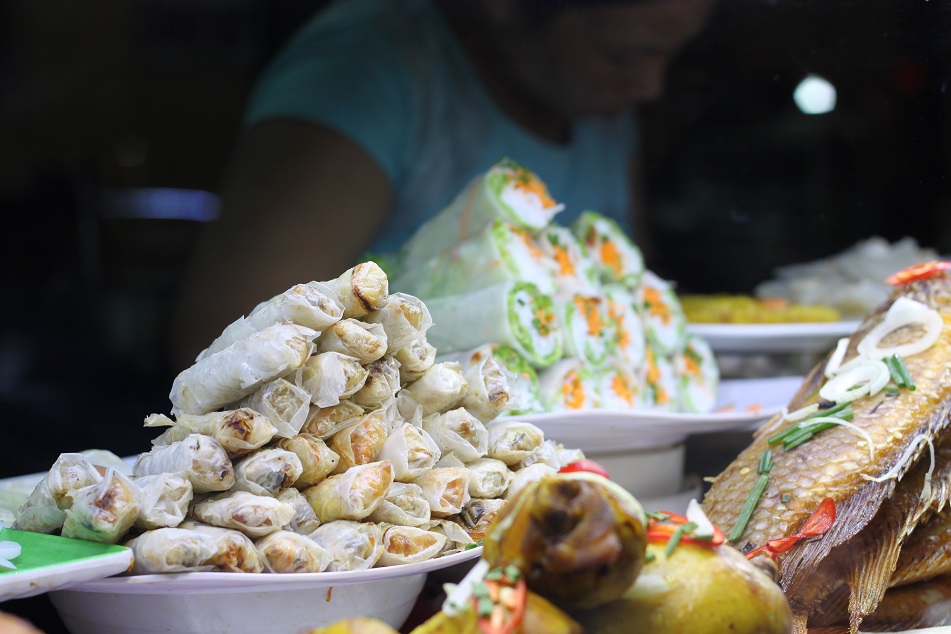 Hoi An’s charming old shop houses are a testament to its significance in the past as an important trading port in the South China Sea. Established as a harbor of the Hindu-Buddhist Champa Empire, it further rose to prominence under the Nguyen lords – rulers of southern and central Vietnam after Champa had been subdued by the Viet people – who had a great interest in commerce. This in fact occurred at a time when European merchants began exploring trade opportunities in Asia, which would eventually lead to their colonization of many parts of the continent. The Portuguese were the first who came, followed by the Spanish and the French.

The Japanese joined in and set up a settlement in Hoi An. To connect their enclave to the Chinese merchant communities which had by then been very well established in the port city, the Japanese built a covered bridge in the late 16th century, creating Hoi An’s most recognizable landmark. Apart from practical reasons, the construction of this ornate bridge might have also been intended as a gesture of peace between the two communities, hailing from two of Asia’s superpowers which have been fierce enemies throughout history. The Japanese carried on trade activities in Hoi An for decades until the implementation of a strict isolationist policy by the shogun in an attempt to curb the influence of European powers as well as the spread of Christianity in Japan. Consequently the Japanese were barred from leaving their country and those already on foreign soil had to return, including the ones in Hoi An.

The bridge was fortunately not abandoned as responsibility for the structure was passed to the remaining Chinese communities and also the local Vietnamese, who later added a small temple on the bridge dedicated to the god of weather. Hoi An continued to be a thriving port for more than a century until 1835 when the xenophobic emperor Minh Mang closed his realm from the Europeans, except for Da Nang, 24 kilometers to the northwest of Hoi An. Hoi An’s importance waned, and what was once a cosmopolitan trading port gradually turned into a sleepy backwater.

However, this seemingly catastrophic turn of events for commerce in Hoi An eventually saved the city during the American War (the Vietnam War) which saw the old imperial capital of Hue and the ancient ruins of My Son heavily bombed by U.S. airstrikes. Hoi An’s significance in the past made it an important trading port in the region, yet its insignificance in the 19th century helped avert its large-scale destruction. In 1999, long after the war ended, Hoi An was inscribed on the UNESCO World Heritage List, and following the same pattern as other UNESCO-listed sites, this formerly sleepy city has witnessed a surge in tourist numbers. Hoi An has once again become a lively city. Only this time it is filled with tourists of all nationalities, not merchants from faraway lands.

Calmer Water in the Morning

Local Women with Their Boats

A Fisherman Tending to His Net

Making Sure the Net is Ready for Another Catch 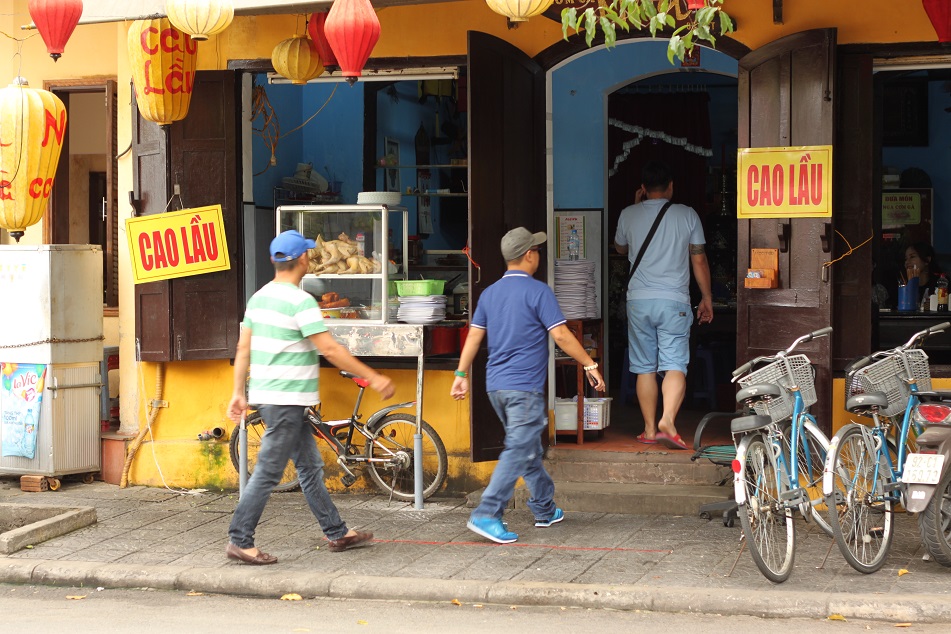 Eat Where the Locals Go 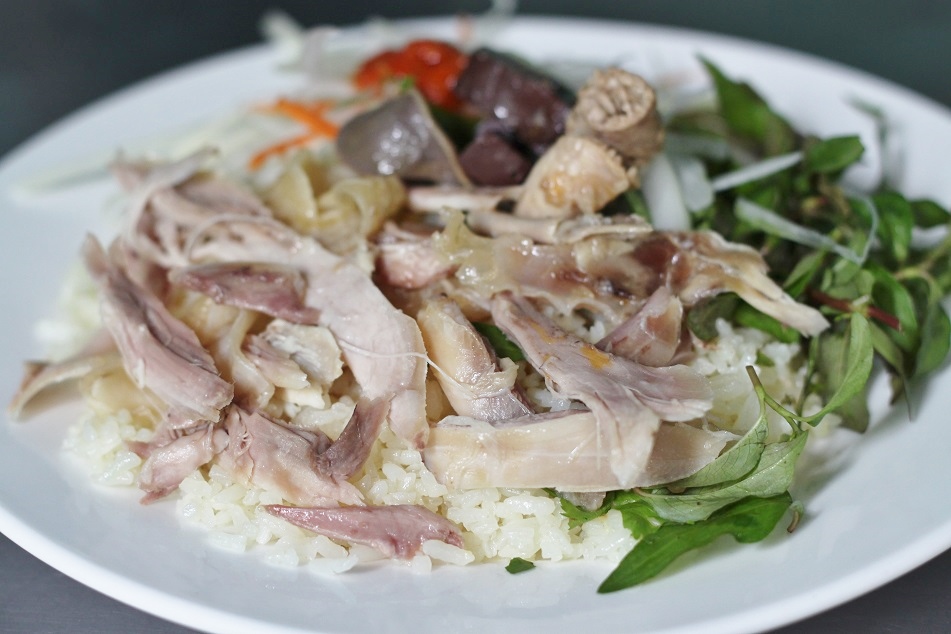 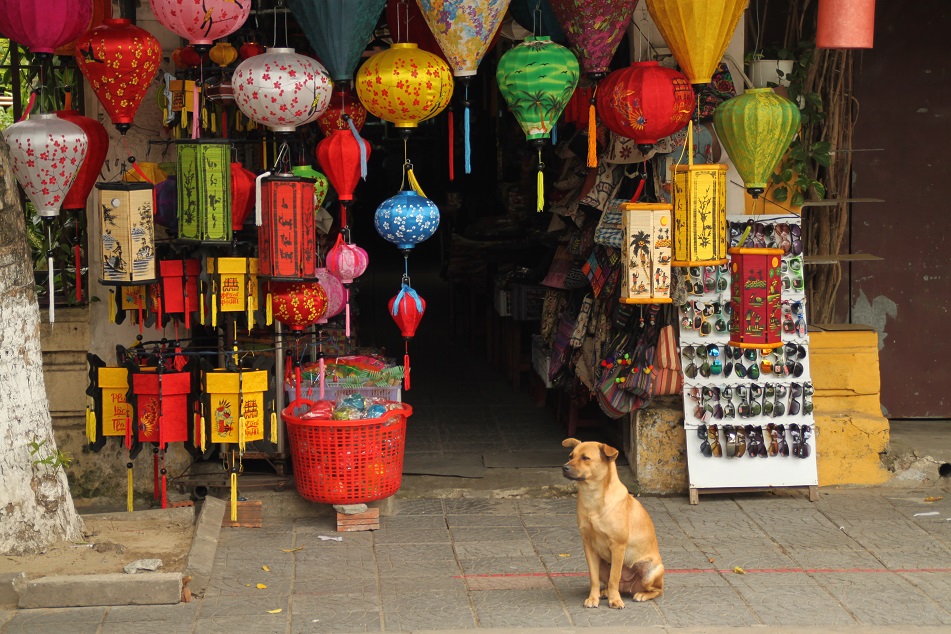 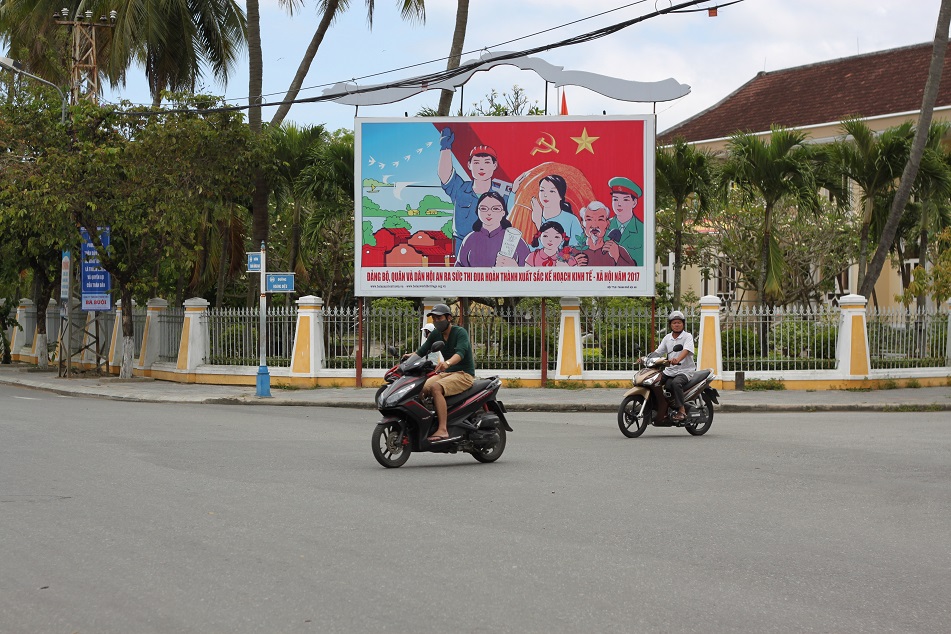 It is easy to lament the rapid change of a place because of tourism. However, a walk around the city’s historical center early the next morning proved that Hoi An is still very much home to the locals as much as it is an attractive tourist destination. Most boats were moored, and the boatmen were either fixing their fishing nets or having breakfast with their local friends. A few tourists who were already awakened from their slumber, including us, were presented with scenes of a bustling market where fresh vegetables, fruits and fish were on display, sold mostly to locals to make dishes for their families at home or for tourists.

A Vietnamese blogger who goes by the name Len once mentioned how different Hoi An was fifteen years ago as its old town was a collection of decaying houses lining dirty streets. No colorful lanterns were in sight, and neither were the small boats that are now ubiquitous on the Thu Bon River. Tourism, it appears, has brought life back to this corner of central Vietnam, along with it the revitalization of old merchant houses and a major clean-up of its streets. The assembly halls of the city’s Chinese communities – including the Cantonese, Fujian (Hokkien) and Hainanese – are now brimming with curious visitors. Keeping the city’s cultural identity amid the growing number of foreign arrivals will certainly be an increasingly contentious issue among its stakeholders. But what happened in November 2017, seven months after our visit, was definitely a wake-up call that there will be even greater challenges Hoi An must face in the years to come.

That November, Typhoon Damrey wreaked havoc and brought a large amount of rainfall to Hoi An, killing more than 100 people and injuring many others. The powerful typhoon caused days of incessant torrential rain in the city, forcing businesses to close and tourists to remain indoors as the swollen Thu Bon burst its banks and flooded the streets. Things must have gradually returned to normal by now, but for sure this recent natural disaster acts as a sobering reminder that this revived old beauty of central Vietnam is not to be taken for granted.

The Eastern Entrance to the Japanese Covered Bridge 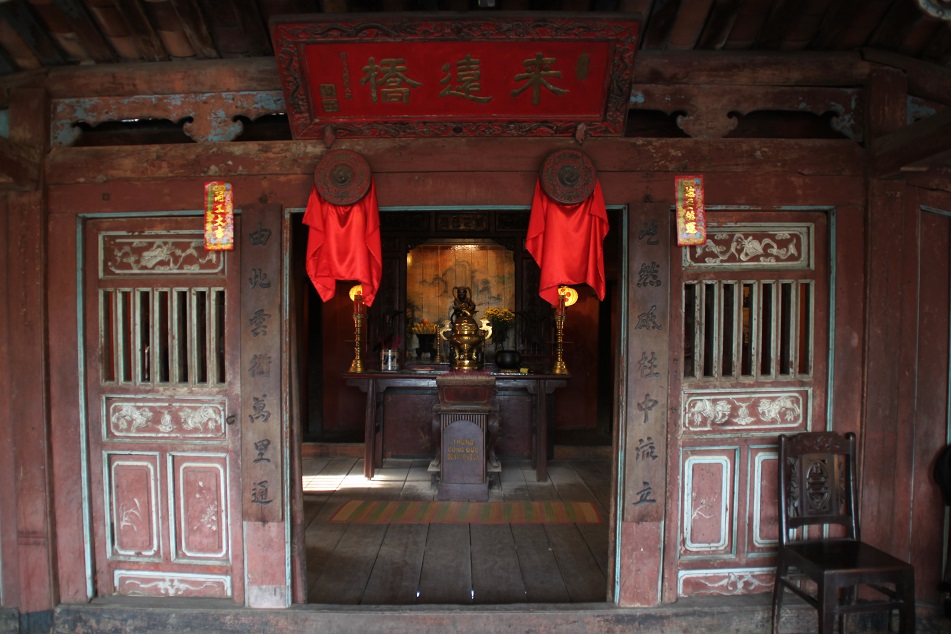 A Small Temple Attached to the Bridge

A Dog Statue Signifying the Year When the Bridge Was Completed

Inside the Temple at the Bridge

Crowds Begin to Gather Outside the Bridge 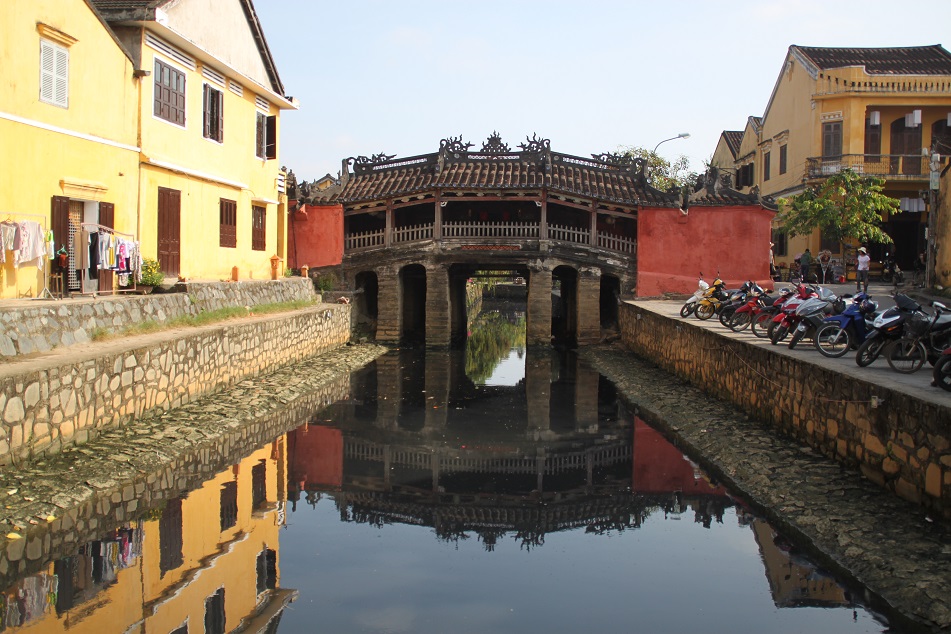 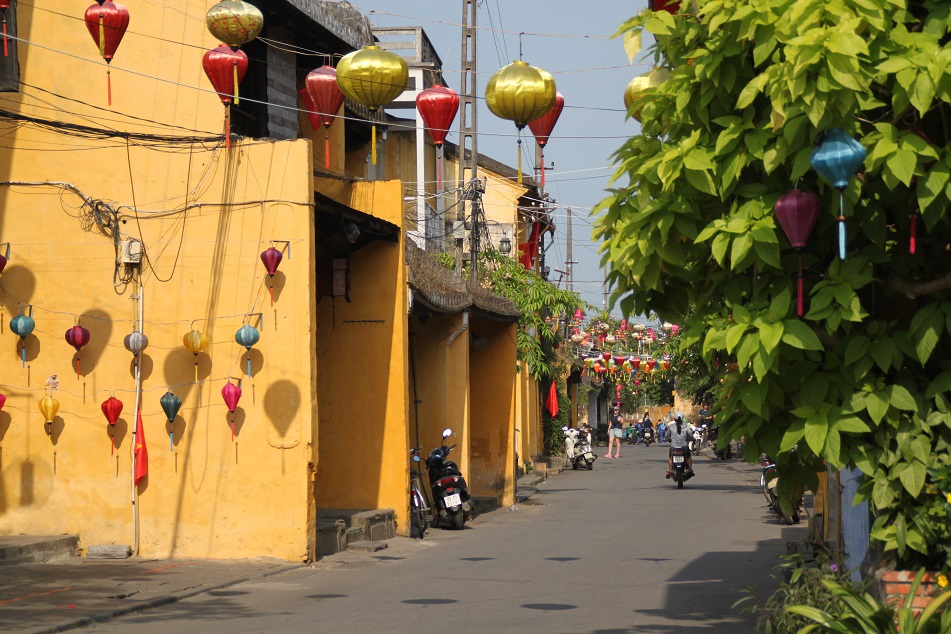 A Morning Stroll along the Near-Empty Streets

A Mosaic Dragon Sculpture at the Cantonese Assembly Hall

One of the Altars at the Cantonese Assembly Hall

An Unintentional Take on Multiracial Harmony, the Cantonese Assembly Hall

The Gate to the Assembly Hall of the Fujianese, One of Many Chinese Communities in the City

The 18th-Century Temple at the Fujian Assembly Hall

Principal Deities Worshiped at the Temple

Traditional Patterns at the Roof’s Edge

67 thoughts on “Hoi An: A Revived Old Beauty”