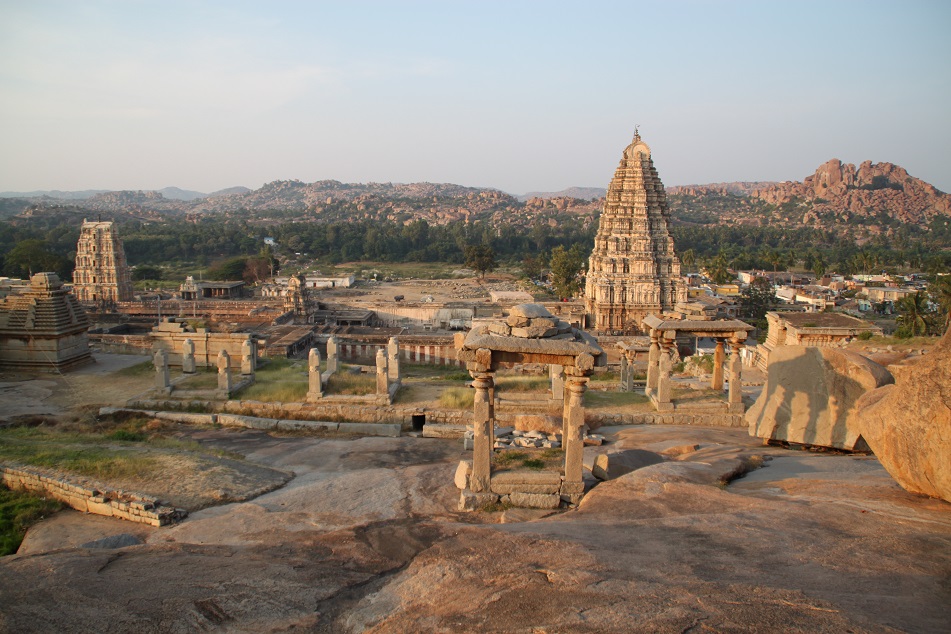 Powers rise and fall, a constant change on earth like the ebb and flow of the sea. Men’s insatiable need for power has caused the world’s political borders to change from time to time, as well as the death of millions of people, the alleviation of others from poverty, the cultural exchanges among nations, the bankruptcy of once prosperous kingdoms, and the constructions of magnificent religious structures. Religion has indeed been central in the history of mankind for going to heaven, or attaining enlightenment, or breaking away from samsara (endless cycle of life and rebirth) and reaching moksha, or other similar notions about one’s afterlife are instilled in people’s minds as of utmost importance in life. Ironically many sought it in an unheavenly, unenlightened way, driven by vana (desire) to reach nirvana (a place with no desire).

In the 14th century, the Indian subcontinent provided a setting for a tug of war between two major religions: Hinduism and Islam. The former had been holding a firm grip of the region for over a thousand of years, forcing Buddhism which once dominated the subcontinent to find safe havens at its peripheries. It also exported its influence to Southeast Asia, from Java (in modern-day Indonesia) to Champa (part of present-day Vietnam), and its vestiges can be witnessed as beautiful, imposing temples found throughout the region.

Islam, on the other hand, emerged from the desert of Arabia in the seventh century, and in a relatively short period of time expanded into multiple denominations and schools of thoughts, often at conflicts against each other like in other religions, and spread as far as northern Africa and the Iberian peninsula in continental Europe (modern-day part of Spain and Portugal). To the south of the Himalayas, the Delhi Sultanate ruled much of northern India after conquering Hindu kingdoms in the northern and western parts of the subcontinent in the 12th century.

Repeated raids from Muslim rulers from the north brought about demise to several southern Indian dynasties, leaving only the Hoysalas as the main Hindu power south of the Deccan plateau. After resisting Muslim military campaigns for nearly three decades, the Hoysalan king Veera Ballala III and his son were killed during a battle against the Muslims. However, Harihara I who at that time controlled the northern part of the Hoysala Empire, quickly consolidated his power and established a new Hindu kingdom, Vijayanagara, which would later rise to prominence and become a formidable Hindu power in the subcontinent’s south.

Harihara I of the newly founded Sangama dynasty based his seat of power in the area by the banks of the sacred Tungabhadra river, already richly dotted with Hindu temples and shrines that predated the soon-to-be empire. Virupaksha temple at the southern bank of the river had existed centuries prior to the Vijayanagara period, although its iconic 52 meter-high eastern gopuram (a towering structure found at the entrances of southern Indian temples) and several other sections of the temple were later added by Vijayanagaran rulers. As was the norm for any Shaivite temples to have the statue of Nandi – Shiva’s vehicle – in front of them, a huge monolithic bull was carved out less than a kilometer to the east of the temple, across the expansive Hampi Bazaar.

Directly to the south of Virupaksha temple, the shrine-studded hill of Hemakuta hosts some of the oldest structures in Hampi, as how the ancient capital of Vijayanagara is better known today, as well as later additions, including Kadale Kalu Ganesha temple with a giant, 4.5 meter-high statue of the elephant-headed Hindu god. 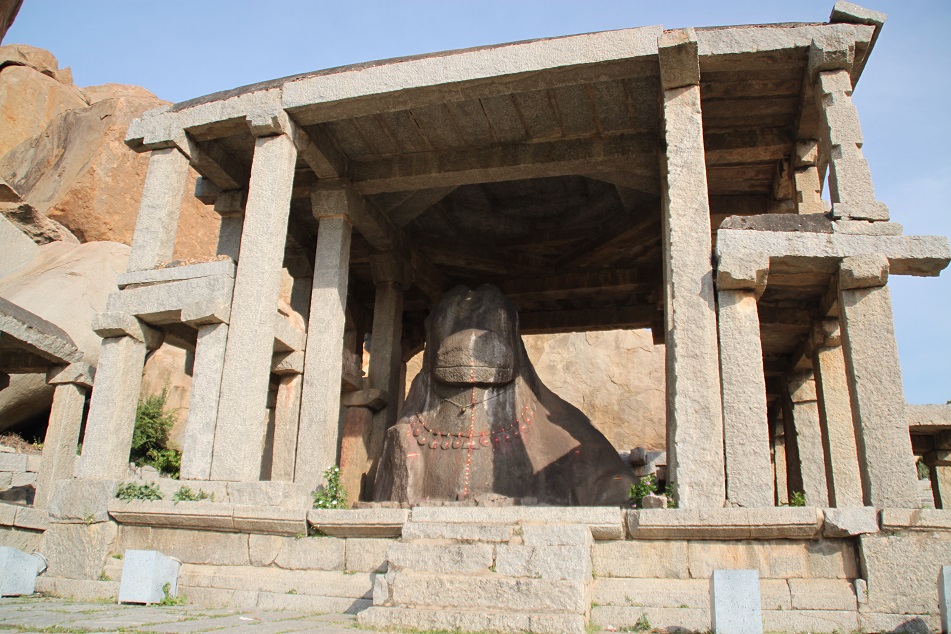 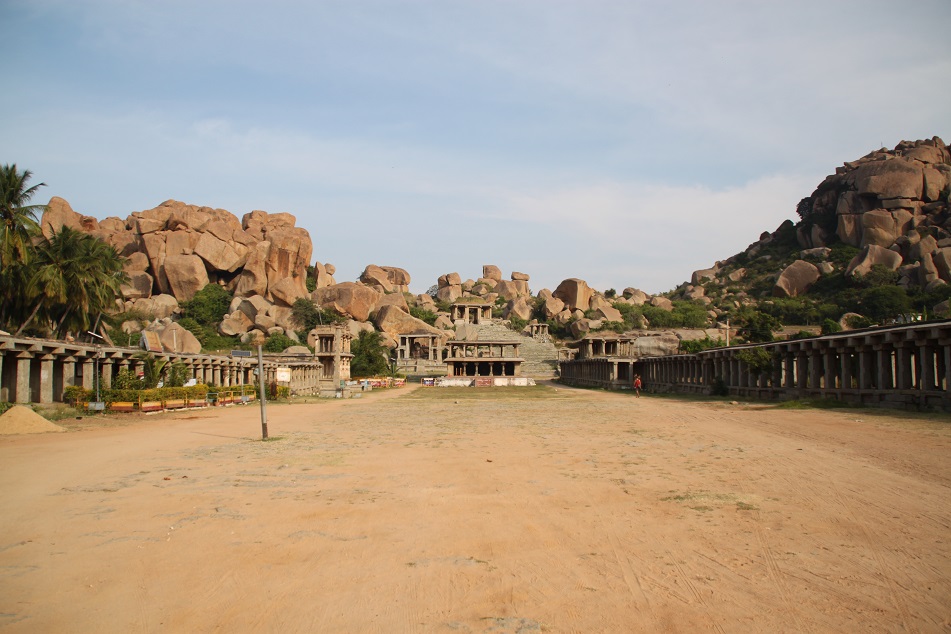 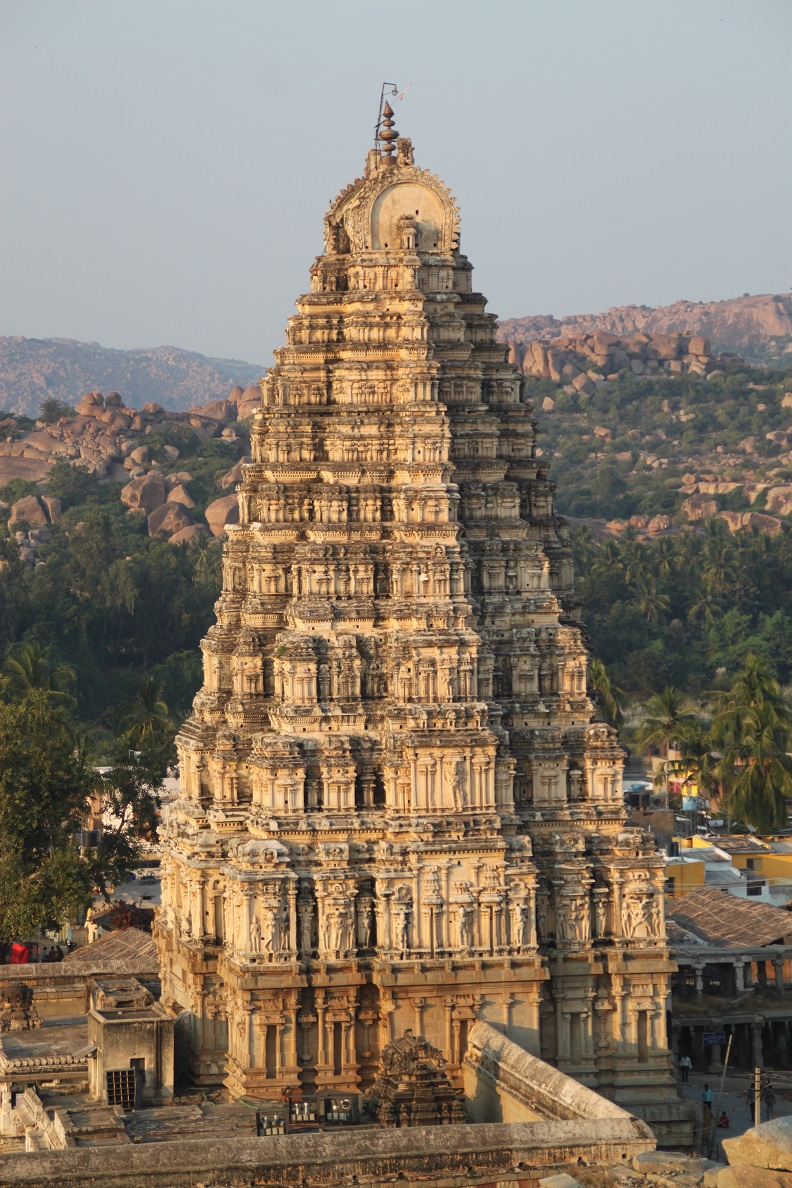 The East Gopuram of Virupaksha Temple 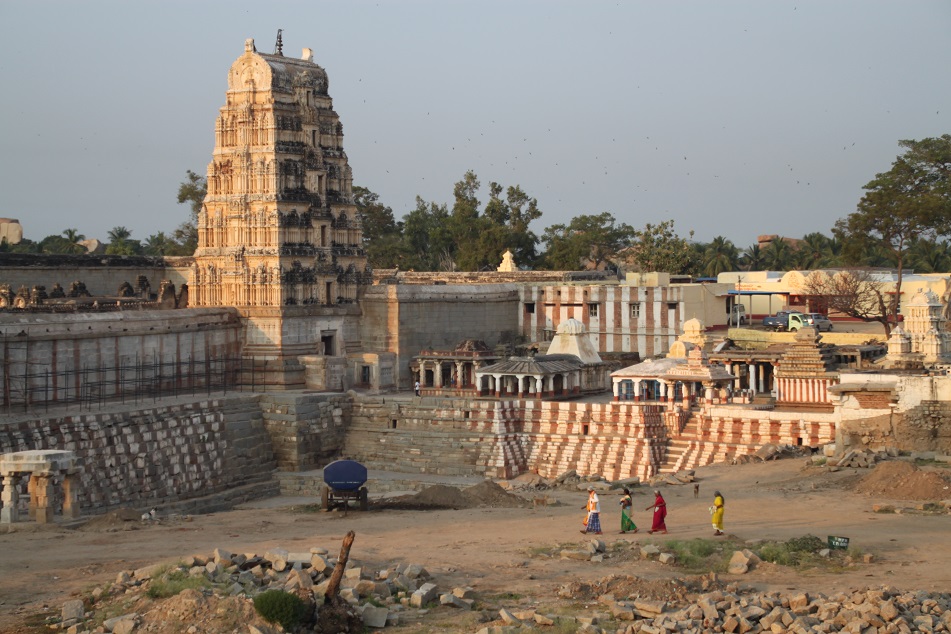 Life around the Temple 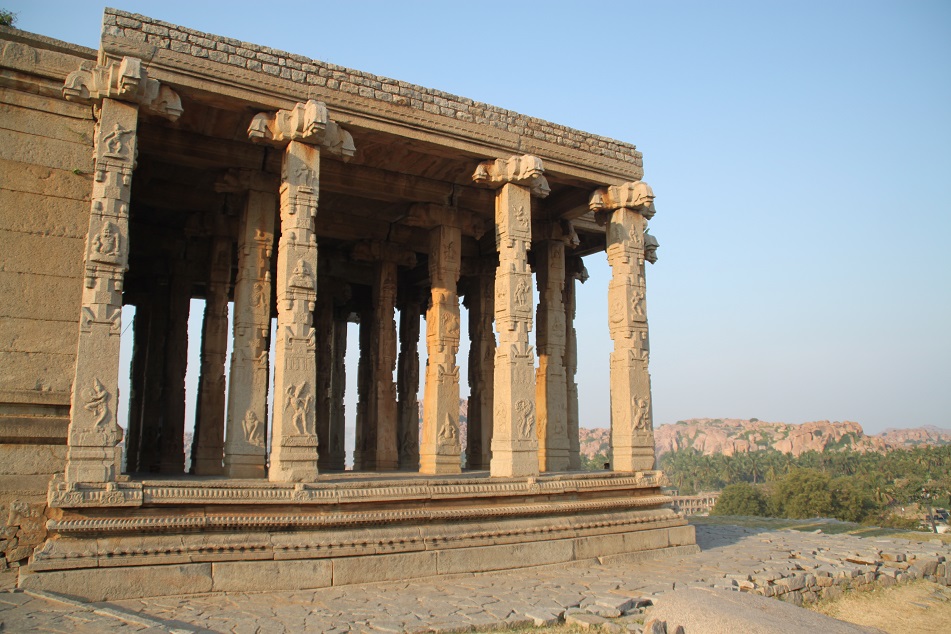 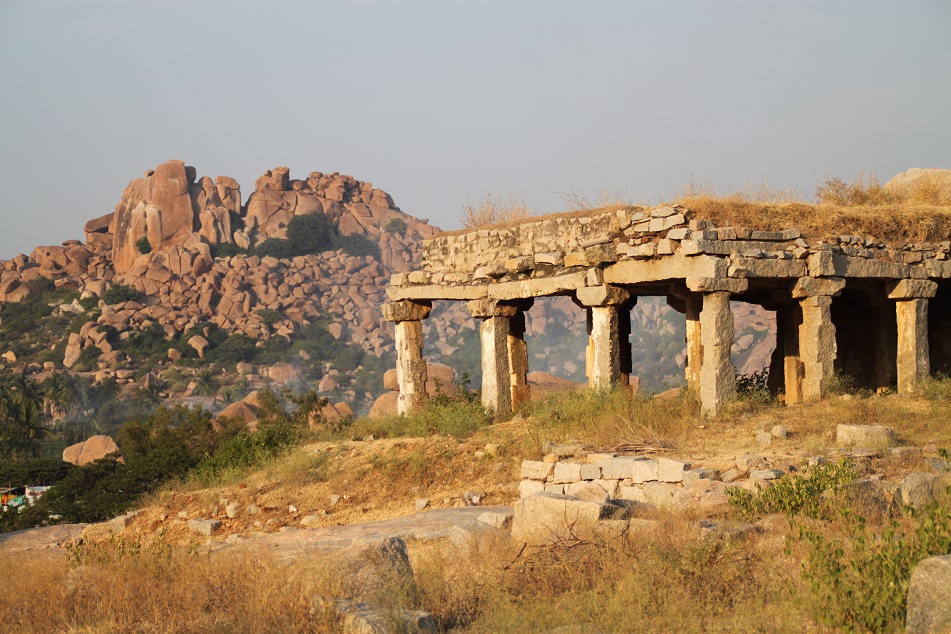 In spite of the plethora of ancient temples at the southern banks of Tungabhadra, it was the northern banks of the river, however, which became the seat of the first capital of Vijayanagara. Anegondi was situated on the same side of the river with Anjanadri hill, an outcrop of giant boulders believed to be the birthplace of Hanuman (Hanoman), the monkey-god from Ramayana. Kishkinda, as the area is called in the Hindu epic, was the ancient dwelling of the monkey kingdom to whom Rama sought help to rescue his wife, Sita (Shinta), from Rahvana (Rahwana) the king of the island of Lanka.

In their effort to release Sita from Rahvana’s hands, the monkey warriors, led by Hanuman, built a bridge from the Indian mainland to Lanka, possibly using the giant boulders available in abundance at Kishkinda. As a matter of fact, up until the 15th century a narrow strip of land connecting both sides did exist, allowing people to cross on foot. It was a storm in the late 15th century which made the once walkable isthmus impassable.

Pampa, our patient rickshaw driver who was also our guide, explained that in the past only Hindu sages would climb to the top of Anjanadri where Hanuman temple perched. However today a flight of staircases makes the hill more accessible, enabling us to marvel at the otherworldly landscape littered with endless giant boulders as far as our eyes could see, a fitting home to one of the most venerated characters in Ramayana. Hanuman holds a special position among the locals, so much so they use his image to guide people to go to the right direction as would an arrow sign in other parts of the world. Whichever way Hanuman looks, that’s the way to follow.

Peppered with an ancient fort, a hilltop Shiva temple, a modest palace, a sacred pond, and ancient temples, Anegondi provided a glimpse into a period of power consolidation in the early decades of Vijayanagara. Despite its present-day tranquility, where ripening rice grains filled in the arable lands amid the imposing rock formations with cars and motorcycles occasionally passing through the otherwise empty road, Anegondi was where early Vijayanagaran rulers’ fiery ambition to reassert Hindu dominance in South India more than six centuries earlier was established. Today, unlike its more family-oriented southern counterpart where most locals live, the northern side of the river appears to resemble a hippie village with a curiously high proportion of male tourists wearing kippa, restaurants serving Israeli dishes, and establishments with signboard written in English and Hebrew.

The river itself remains sacred for the locals, and less than a kilometer to the east where Tungabhadra turns northward, Chakratirtha is considered the holiest bathing spot in the river. Overlooking the river bent with modest-sized mandapas (pillared pavilions) on both sides is Narasimha temple, built in the late 14th century by Hiriya Timma Setti, a custom officer of Harihara II. Under his rule the empire defeated the short-lived Madurai Sultanate and continued its expansion and successfully conquered lands as far as modern-day Andhra Pradesh, Goa and parts of Maharashtra.

To the east of Narasimha temple, through a sun-exposed path on the granite hillock, lies a vast temple compound which marked the apex of artistic and architectural accomplishments of Vijayanagara at the height of the empire’s power in the southern part of the subcontinent, regardless of the constant threat from their northern neighbors. 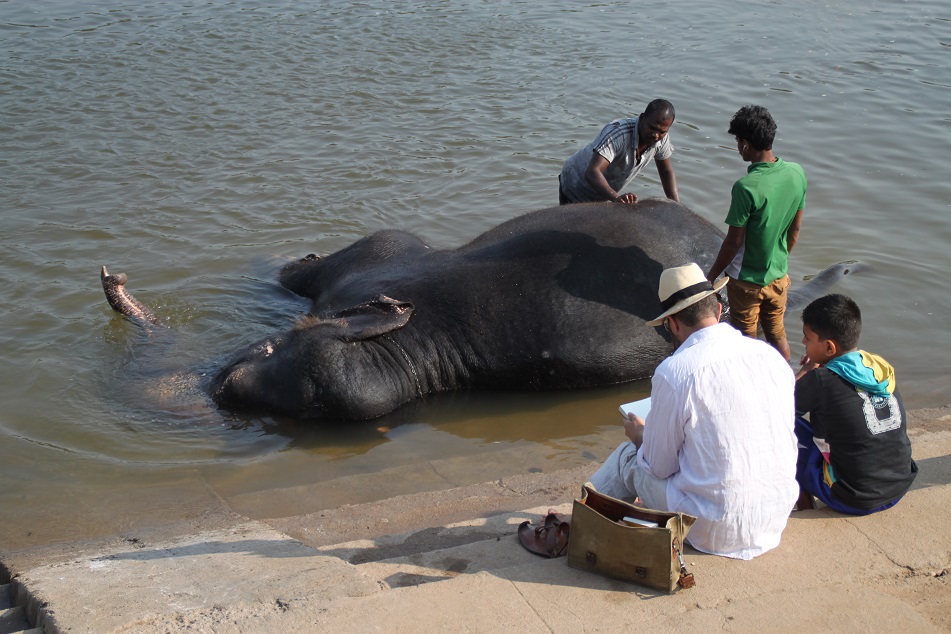 While Waiting for the Boat to Anegondi 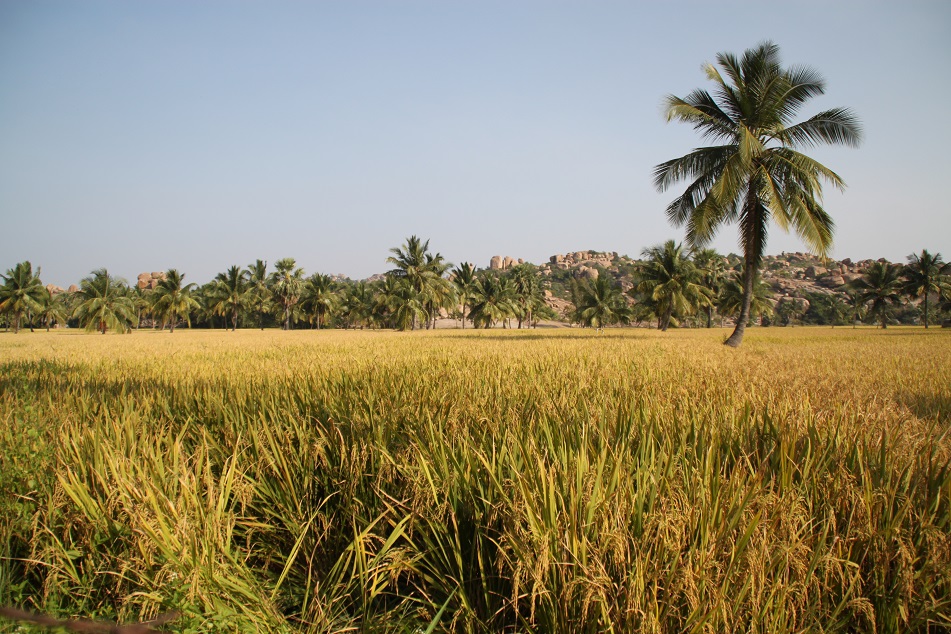 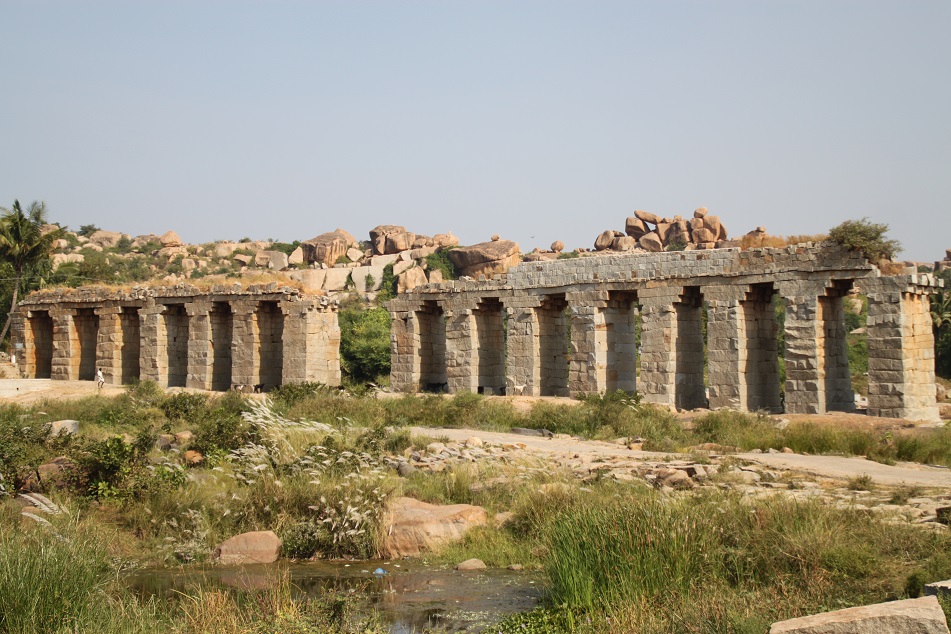 An Ancient Viaduct at Virupapuragadde 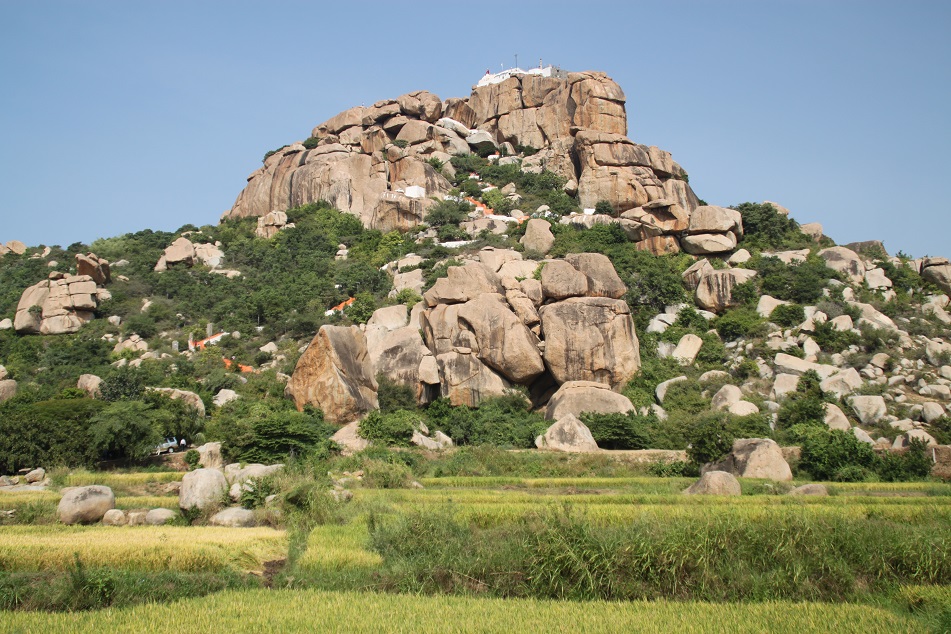 Hanuman Temple on Top of Anjanadri 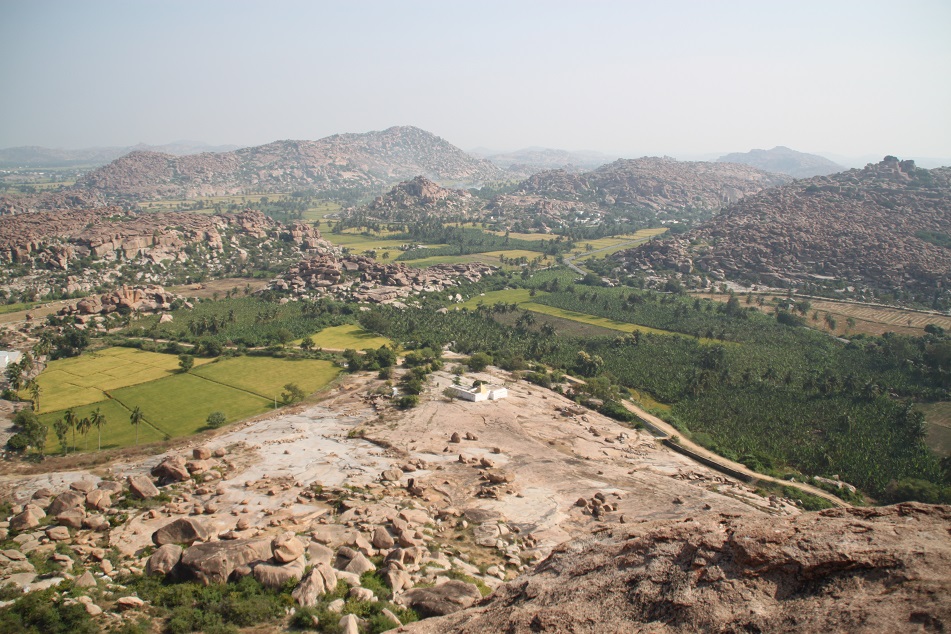 View of the Boulder-Studded Plain from Anjanadri 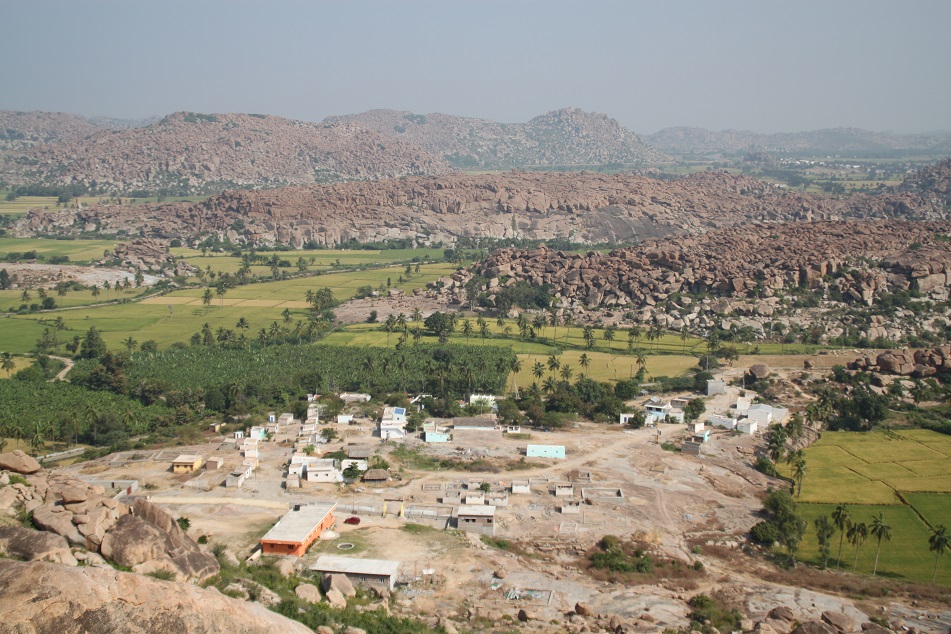 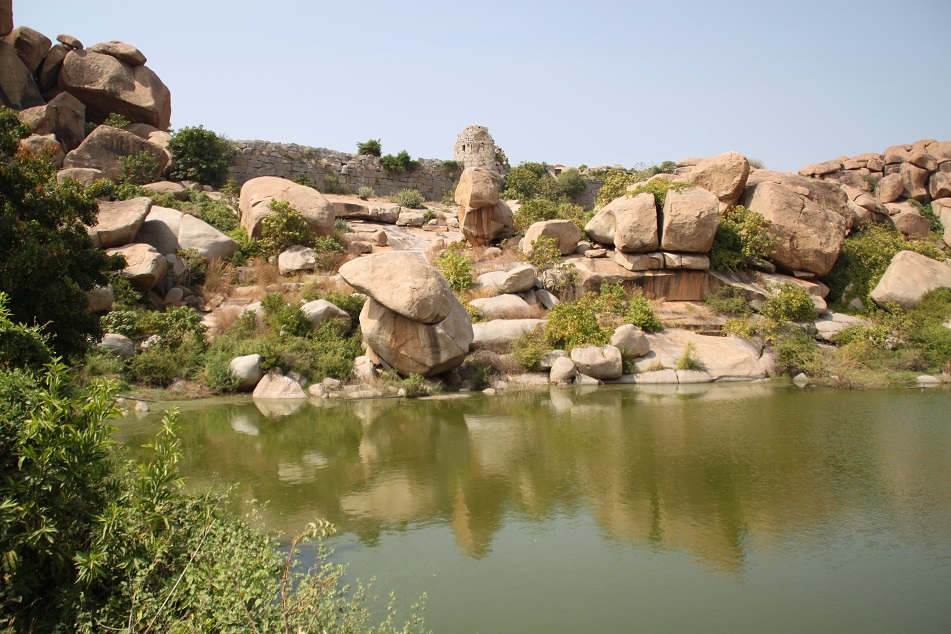 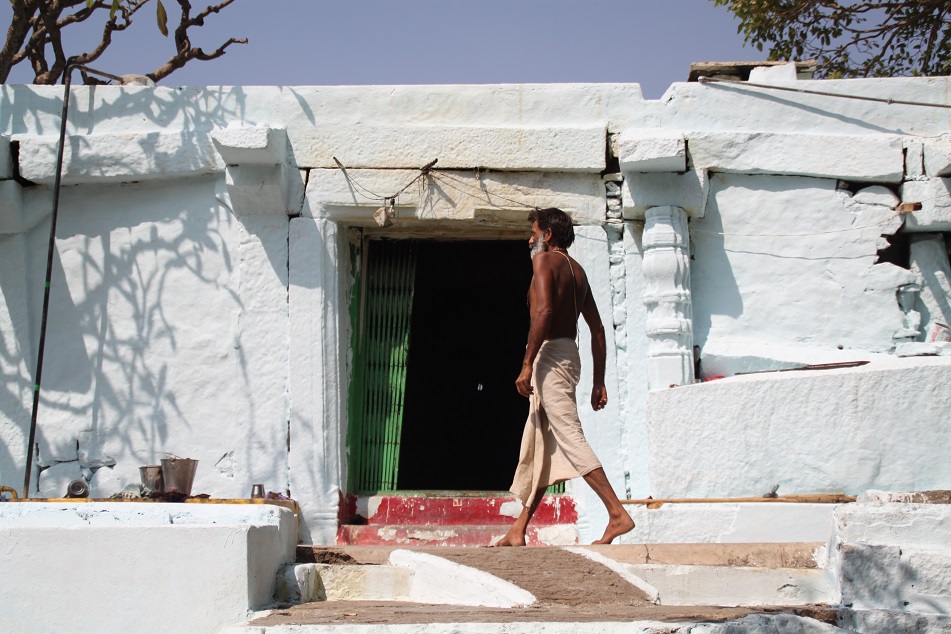 A Small Temple Near Pampa Sarovara 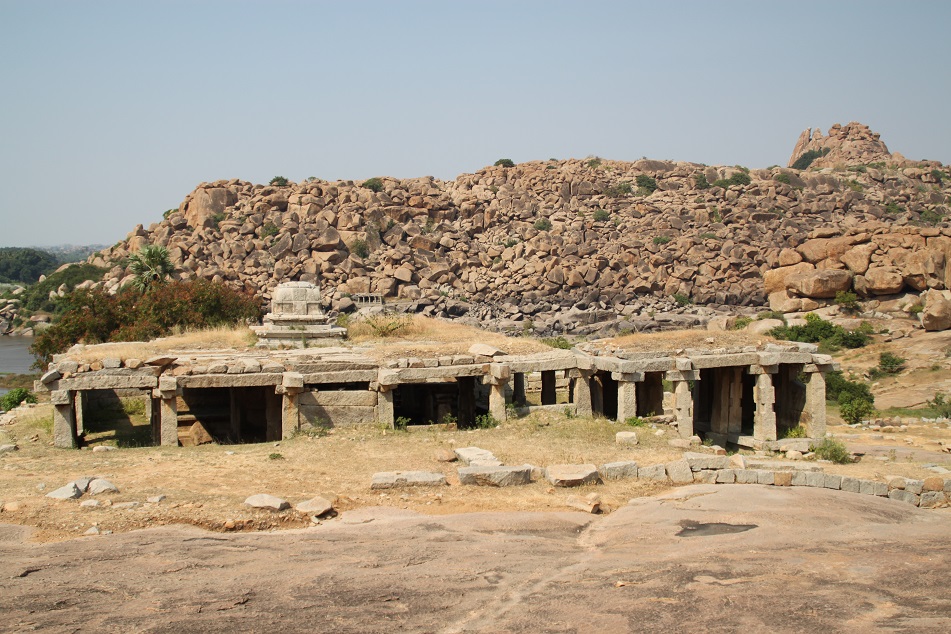 View from Narasimha Temple at the Sacred Center 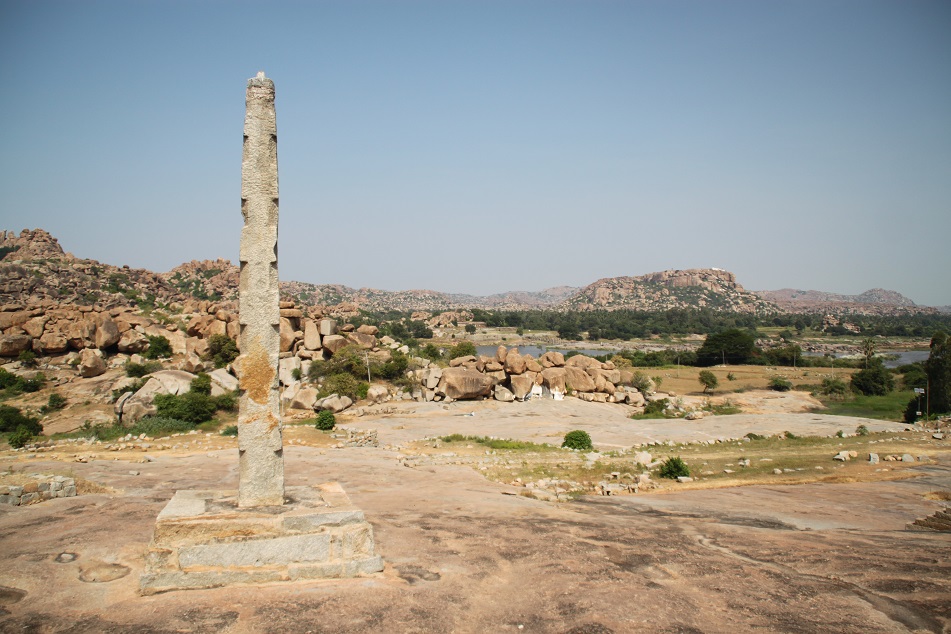 A Sweeping View across Tungabhadra River 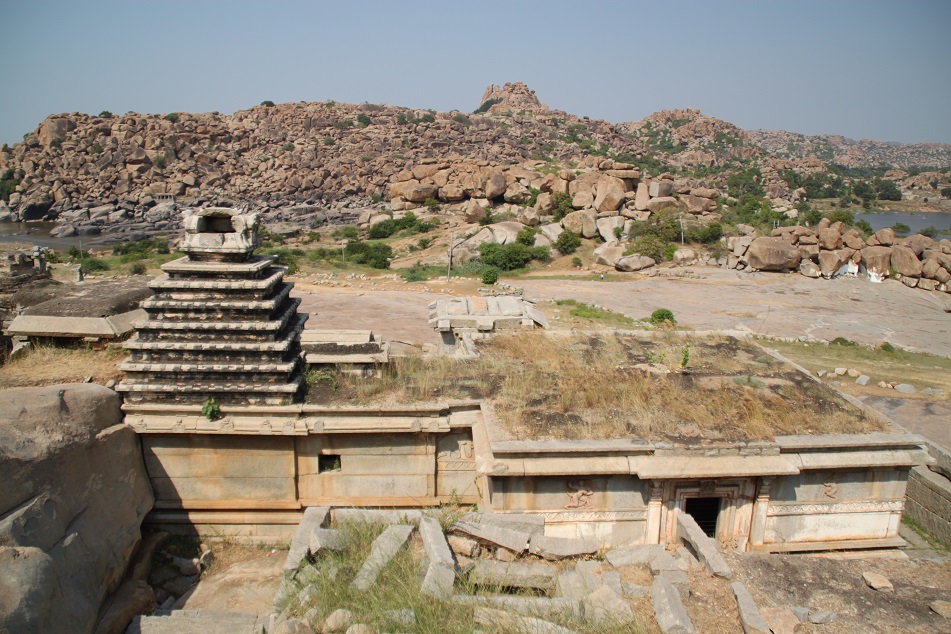 Another View from Narasimha Temple 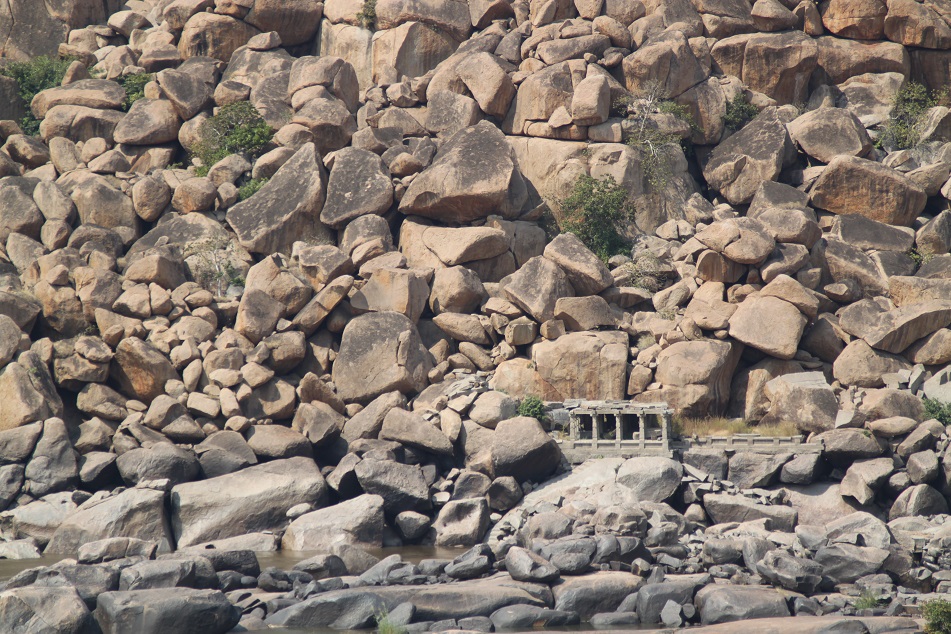 A Small Shrine across the River 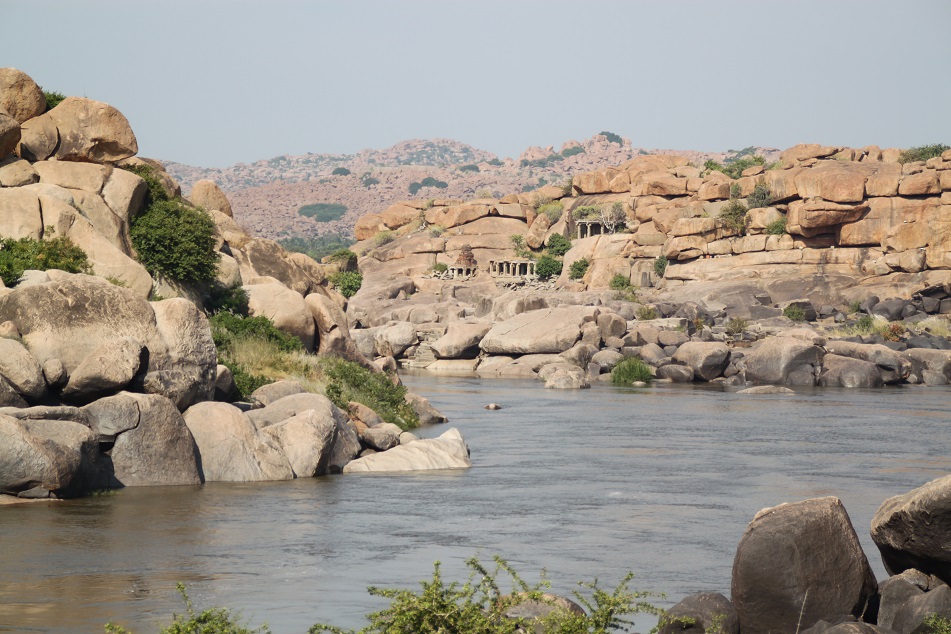 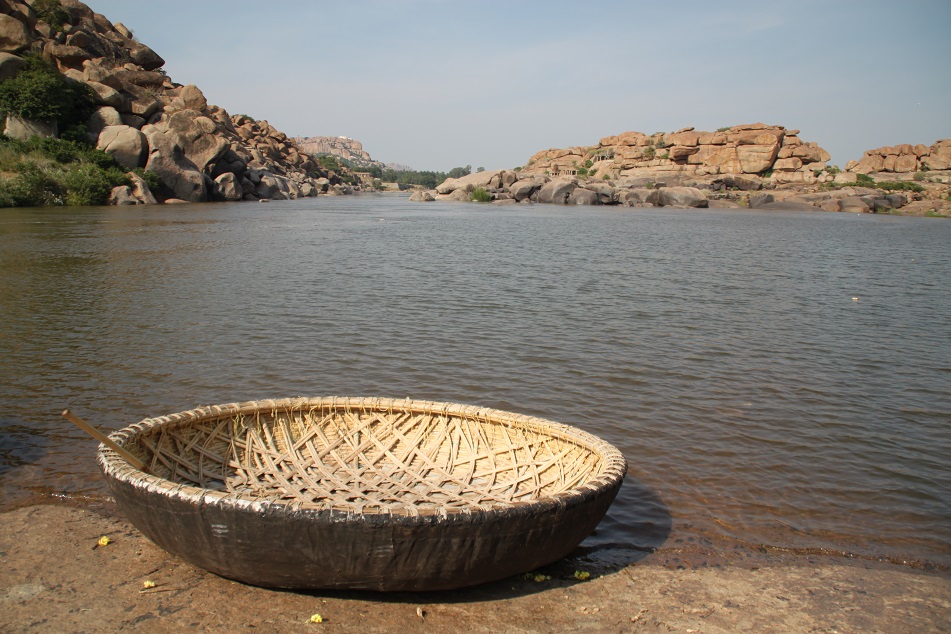 A Coracle at Tungabhadra River 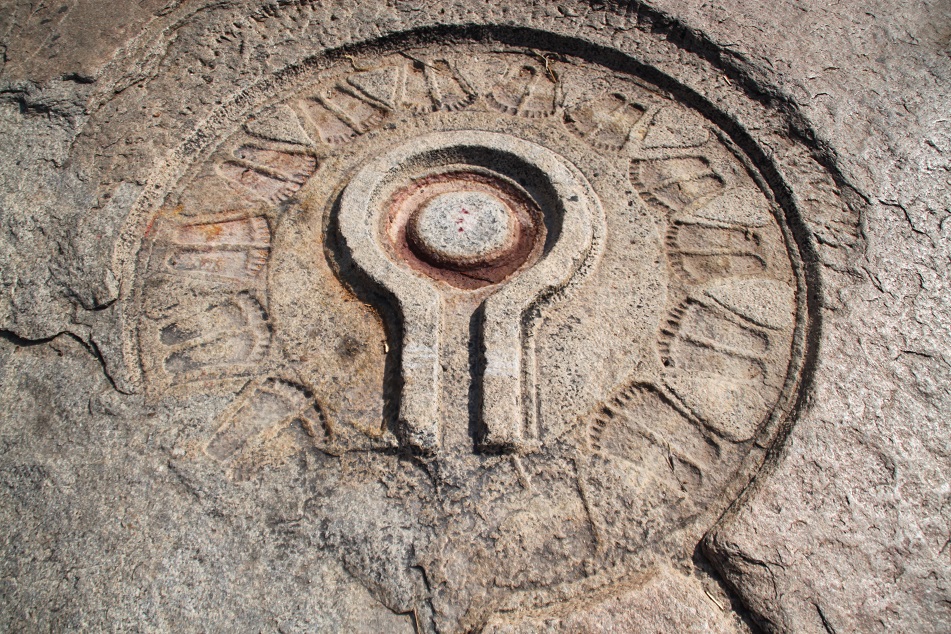 A Symbol of Shiva Carved on A Rock 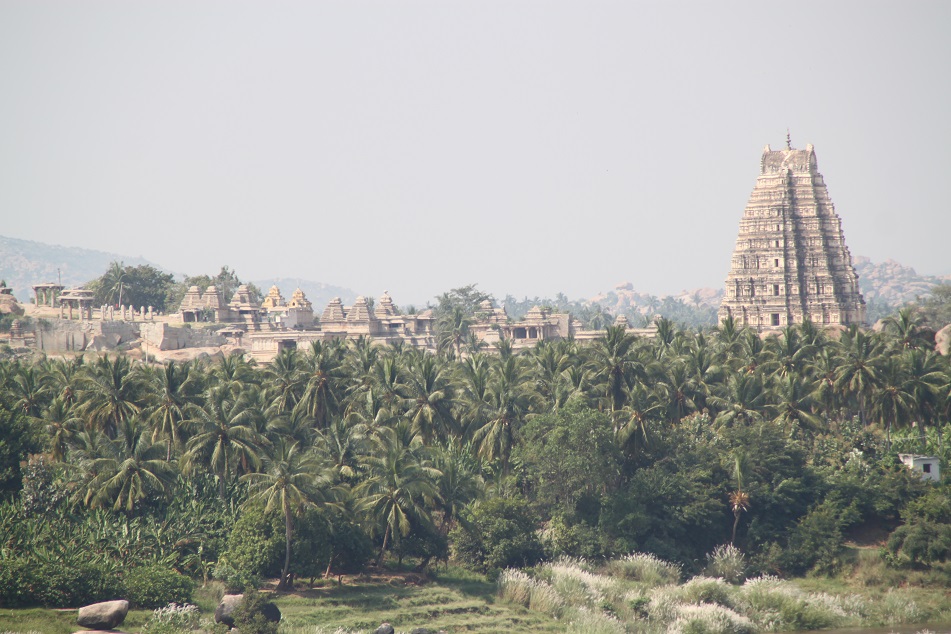 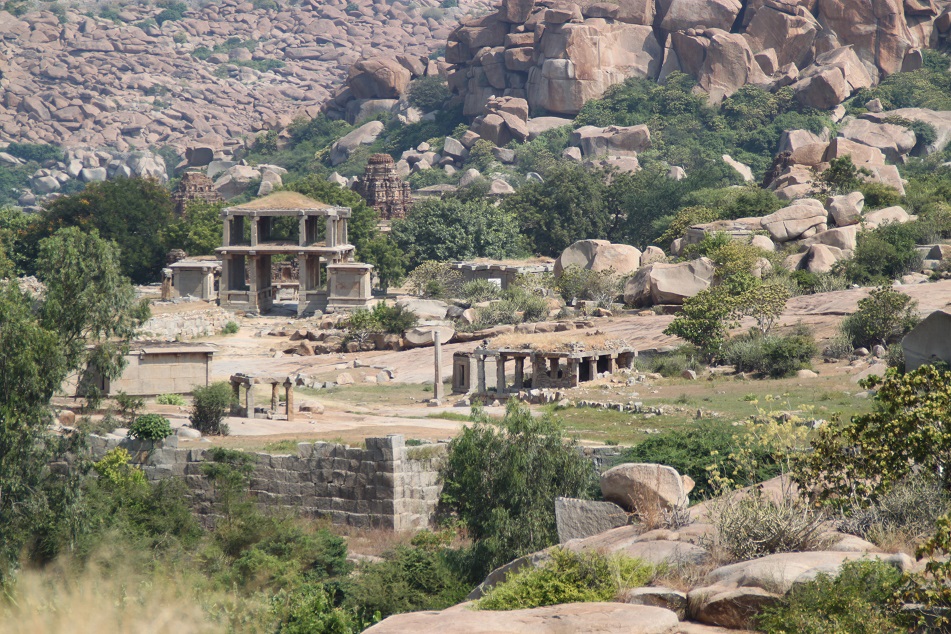 Two-Story Gateway, One of the Entrances to Vittala Temple

50 thoughts on “Vijayanagara: the Beginning”