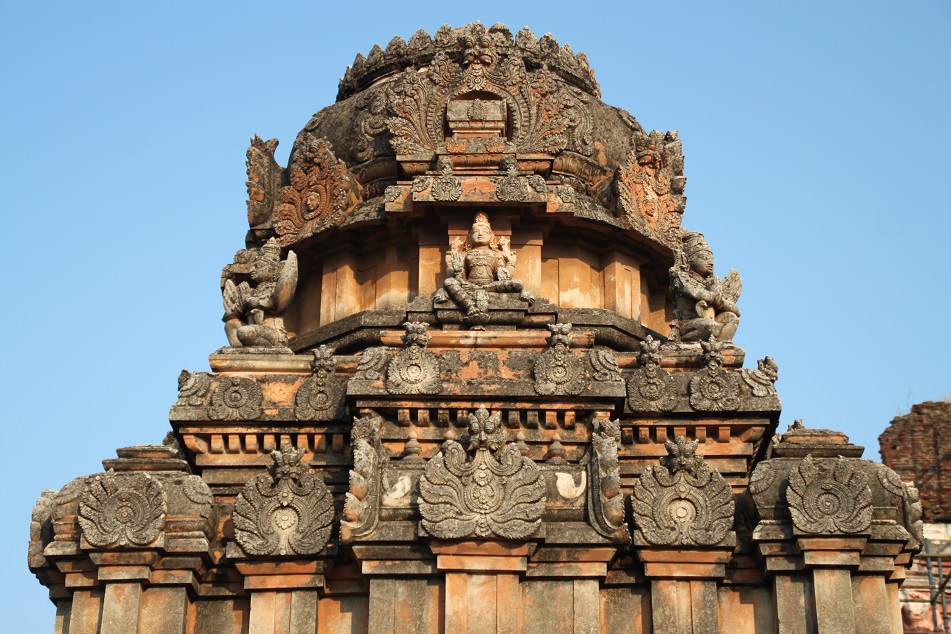 “In this city you will find men belonging to every nation and people, because of the great trade which it has, and the many precious stones there … the streets and markets are full of laden oxen without count, … and in many streets you come upon so many of them that you have to wait for them to pass, or else have to go by another way.”

In the early 16th century when Vijayanagara was under the rule of Krishna Deva Raya, the Portuguese explorer visited the Hindu empire and chronicled his stay in one of the most detailed descriptions of any account on the medieval Indian power. Krishna Deva Raya brought his empire to a new height no other rulers had ever achieved, and Paes was fortunate to be in the empire at the right time to witness the prowess of Krishna Deva Raya’s army during the military offensive against Bijapur, one of the five Deccan sultanates.

Krishna Deva Raya’s successful campaigns against the Deccan sultans who for centuries had launched repeated raids on Vijayanagara, as well as his victory over the Gajapatis of Odisha, established his empire as the most prominent power in the southern part of the Indian subcontinent. Following the triumphant battle against the Gajapatis, an image of Krishna was brought from Odisha to Vijayanagara as a war trophy.

The victorious king built a temple made from granite rocks to house the image, decorated with bas-reliefs depicting the scenes of the king’s campaign in Odisha. Lavishly embellished with ornate carvings, Krishna temple was one of the finest and most stupendous religious structures ever built in Hampi. A vast bazaar in front of the temple was one of the many ancient bazaars in the Vijayanagaran capital, a testament to the prosperity Krishna Deva Raya brought upon his people witnessed by Domingo Paes:

“In this street live many merchants, and there you will find all sorts of rubies, and diamonds, and emeralds, and pearls, and seed-pearls, and cloths, and every other sort of thing there is on earth and that you may wish to buy.”

“I climbed a hill whence I could see a great part of it; I could not see it all because it lies between several ranges of hills. What I saw from thence seemed to me as large as Rome, and very beautiful to the sight.” 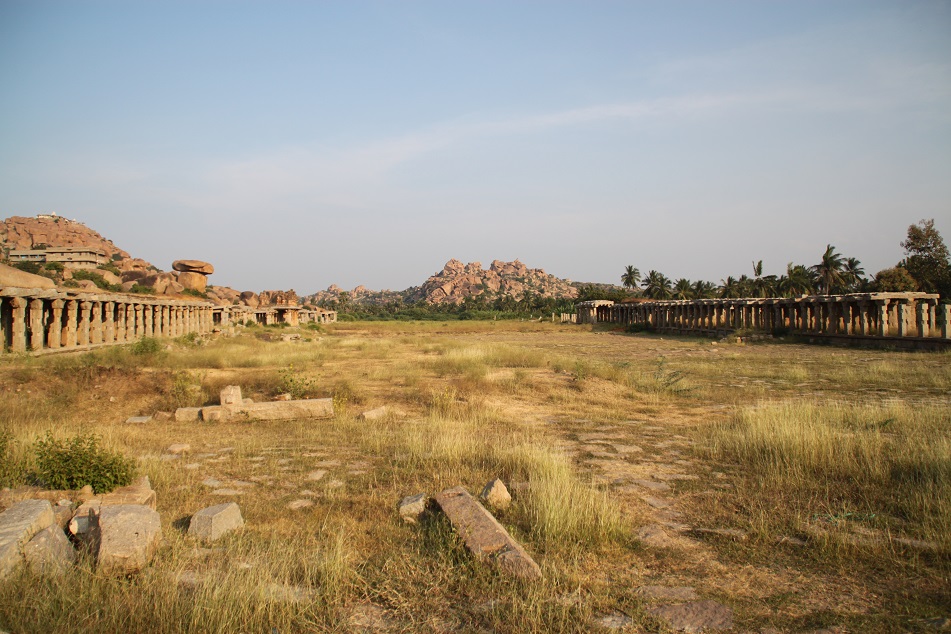 An Ancient Bazaar in front of Krishna Temple

Grazing at the Ancient Market 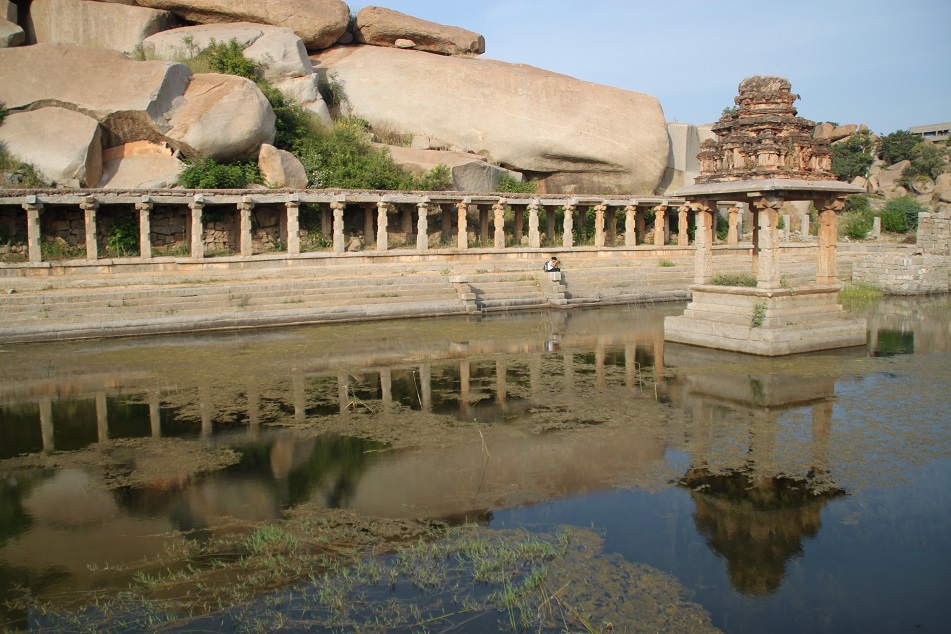 Lokapavani, A Once Sacred Pond Near the Bazaar

The Underground Temple of Prasanna Virupaksha 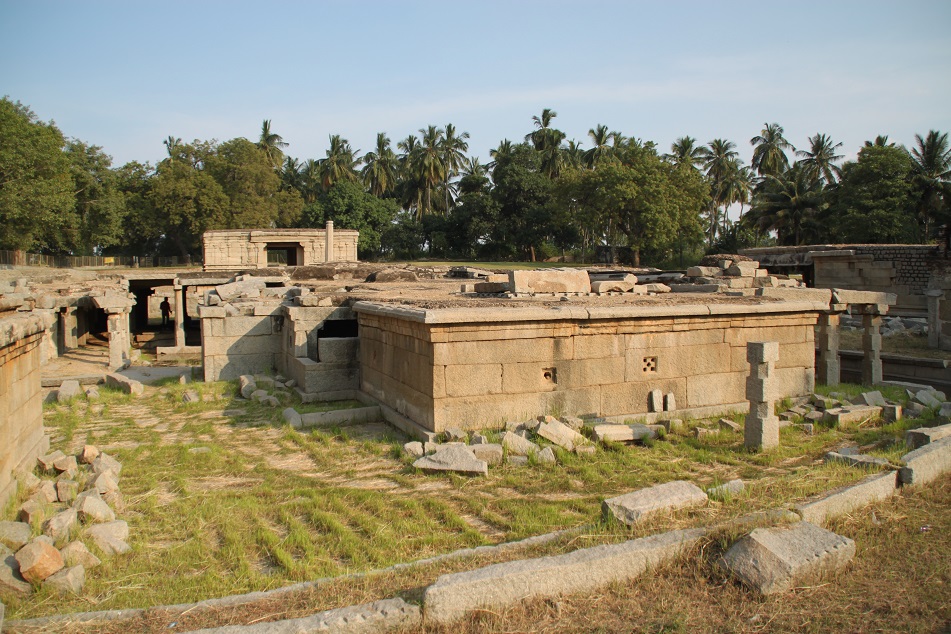 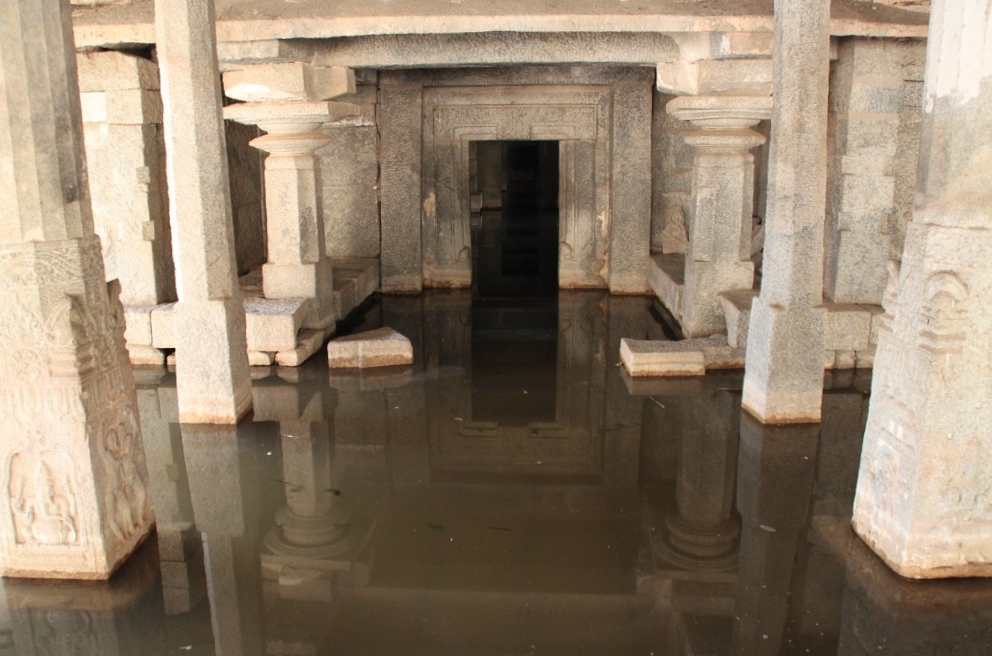 Two decades after ruling Vijayanagara in a glorious chapter of the empire’s history, Krishna Deva Raya died in 1529. His younger brother, Achyuta Deva Raya (Achyutaraya), ascended the throne and was poised to continue the great work his brother had done to the kingdom and his people. Music, literature, and architecture were some of the artistic fields the new king further nurtured.

Behind Matanga Parvata, a hill situated behind the giant monolithic Nandi statue across Virupaksha temple, the new king commissioned the construction of another great temple in the empire’s capital. Tiruvengalanatha, known as Achyutaraya Temple today, was built on a plain hugged by boulder-studded hills iconic to the region. A pearl bazaar, also known as Achyutarayapete, lied to the north of the temple with a thoroughfare, known to past European explorers as Courtesan street, leading up toward the river.

Achyuta Deva Raya made serious efforts to maintain the wealth and stature the empire enjoyed during his brother’s rule, and to some extent he was quite successful. Garcia de Orta, a 16th-century Portuguese Sephardic Jew who worked as a physician, herbalist and naturalist, as well as a spice and precious stone trader in Goa, described that a diamond as large as a small hen’s egg had been sighted in the markets of the capital of Vijayanagara. He also attested to three other diamonds weighing 150, 175 and 312.5 carats traded in the capital.

However, Achyuta Deva Raya’s rule was seriously challenged not by foreign forces, but by Aliya Rama Raya, none other than his brother’s son-in-law whose own ambition compromised the integrity of the empire.

After more than two decades in power, Achyuta Deva Raya was imprisoned by Aliya Rama Raya, and the crown prince, Venkata I, was killed. But it was Achyuta Deva Raya’s uncle who assassinated the young prince, instead of Aliya Rama Raya as people might have assumed. In a series of unfortunate events that shook the political landscape of Vijayanagara, the sultan of Bijapur was installed as the new king of the Hindu empire for seven days, too much an insult to the nobles of Vijayanagara whose raison d’être was to counter the Muslim influence in the subcontinent.

Sadasiva Raya, the nephew of Achyuta Deva Raya then claimed the throne, backed by Aliya Rama Raya who effectively became the de facto king of Vijayanagara with the new king as his puppet. No significant artistic endeavor was made during this period of turbulent time in the Hindu empire, although before his demise Achyuta Deva Raya did commission another temple located on Malyavantha Parvata, a hill far from the royal center of the capital. Raghunathaswamy Temple was possibly one of the last major temples built in the empire prior to its dramatic decline in the late 16th century. 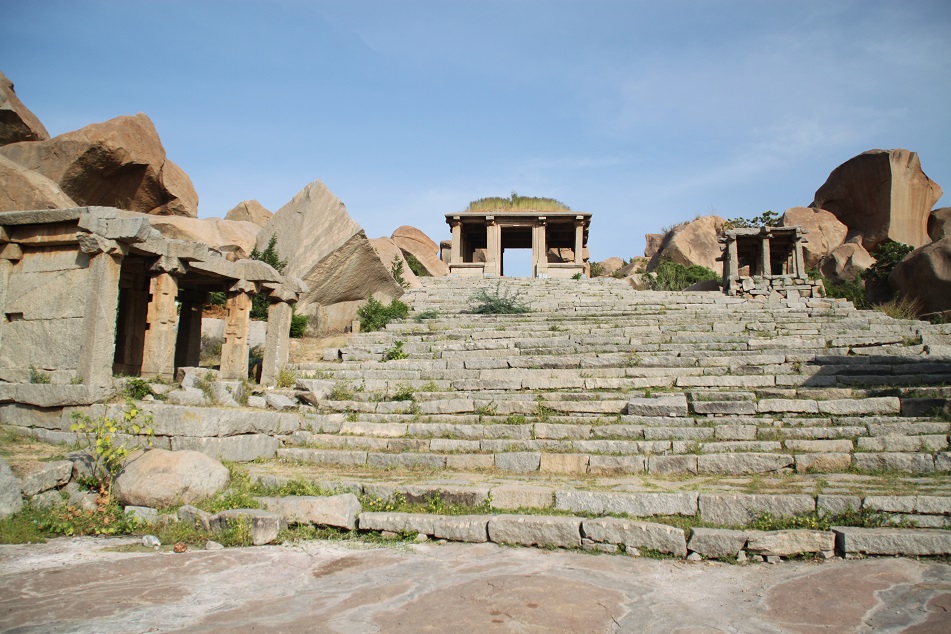 The Gopuram of Achyutaraya Temple 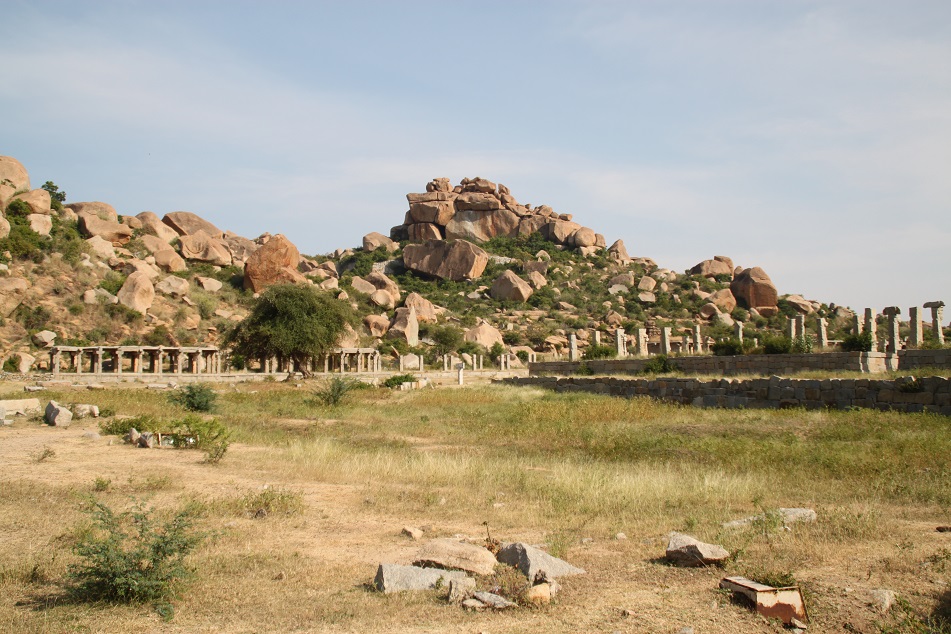 Vast Public Space in front of the Temple

‘Traffic Jam’ on the Way to Raghunathaswamy Temple

The Gopuram of Raghunathaswamy Temple 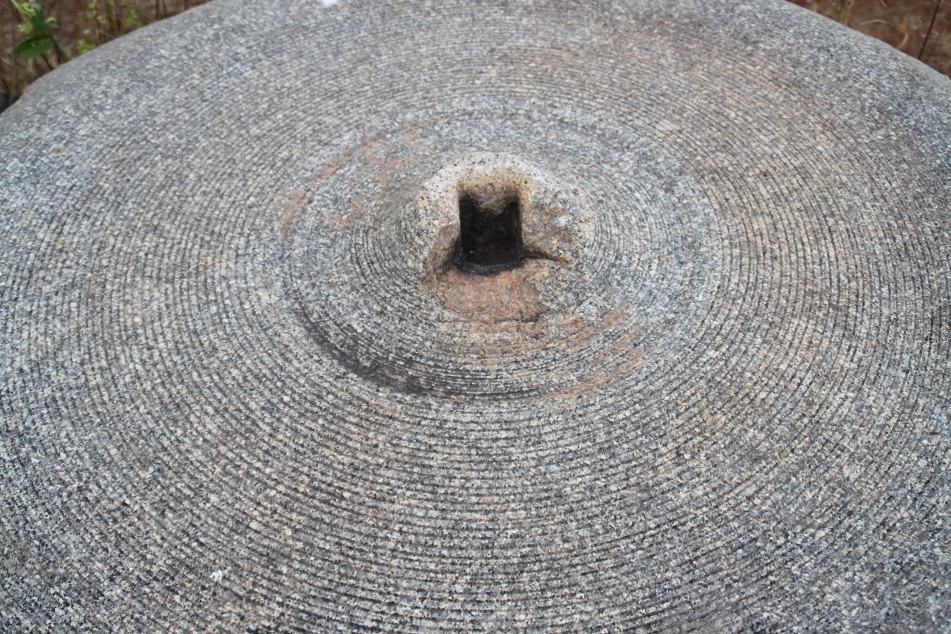 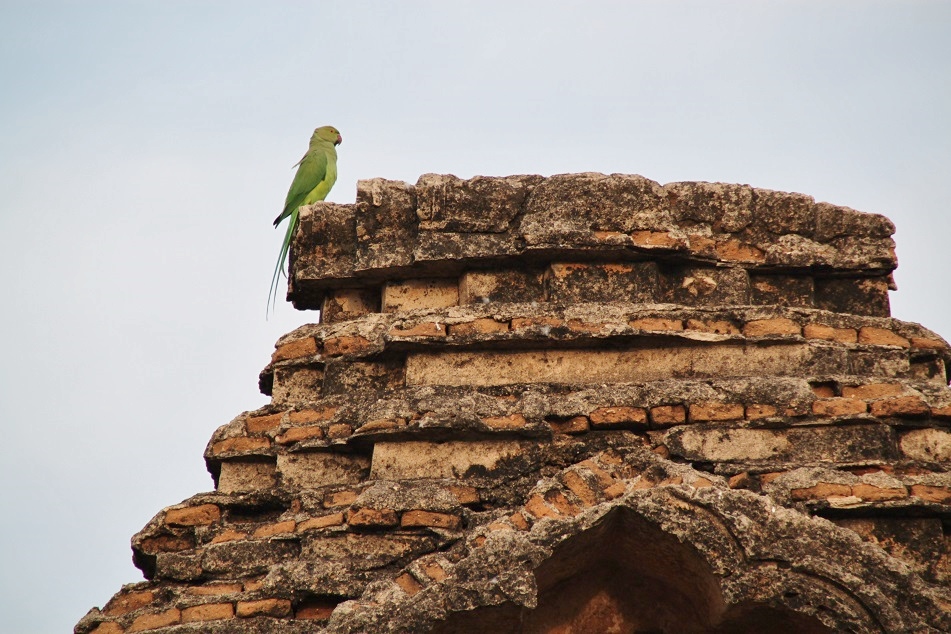 A Parakeet Perched on A Worn-Out Gate 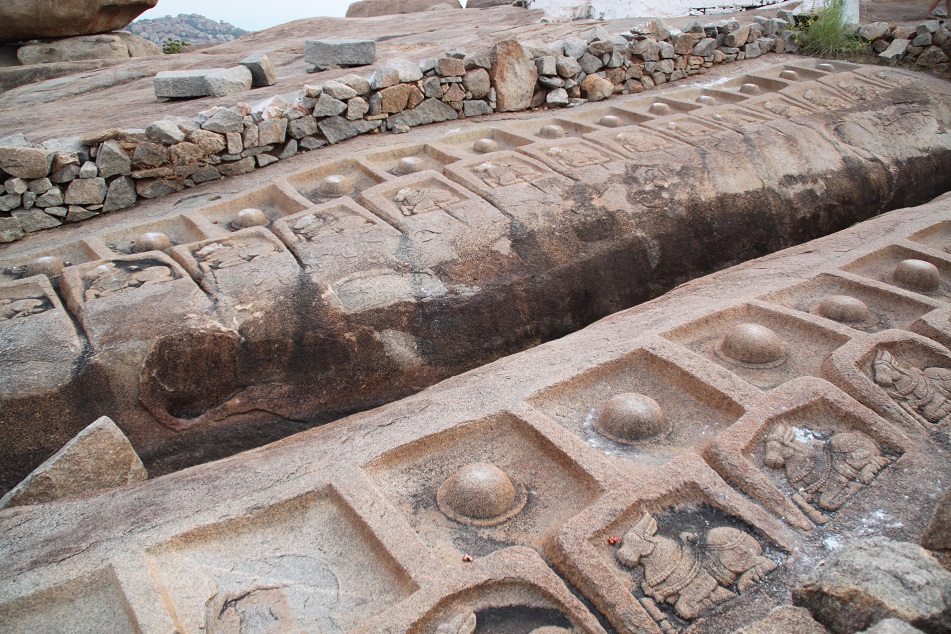 Symbols of Shiva: Multiple Lingams and Yonis with Sculptures of Nandi

Under the reign of Sadasiva Raya, Aliya Rama Raya appointed himself a regent and replaced servants loyal to the previous kings with his own family members and relatives. During this time of great uncertainty, the warring sultans of Deccan often sought help from Vijayanagara to mediate between themselves, an opportunity, as Aliya Rama Raya saw it, to weaken the sultans.

However after constantly changing sides, Aliya Rama Raya was eventually seen as a common enemy by the Muslim rulers whose intention was only to set the sultans against each other. In December 1564 all five Deccan sultanates united and waged a decisive war against Vijayanagara, known as the Battle of Talikota, and one month later Aliya Rama Raya was killed in the battle. With the Vijayanagaran troops left asunder, the remaining royal family of the Hindu empire retreated to Penukonda to the east.

The Muslim army sacked the capital of Vijayanagara, plundered its wealth, and brought the once mighty Hindu empire to its knees. Bhima’s Gate, part of the fortification of the capital named after one of the Pandava brothers from the Hindu epic Mahabharata, proved futile in keeping the royal center safe. In spite of having moved to a new capital at Penukonda, Tirumala Deva Raya and the later kings of Vijayanagara never regained the empire’s past glory. The decline of the Hindu power prompted local rulers to rebel and fight for their own independence.

For more than two centuries, Vijayanagara had dominated the political landscape of southern India. Its kings were so wealthy and the people so prosperous that European and Persian explorers were deeply impressed, and their rivals were so keen on defeating the empire. The capital not only was a cosmopolitan city where goods from produce to precious stones were available for sale at its bazaars, but also a city peppered with architectural splendors, from richly decorated Hindu temples to secular Indo-Saracenic buildings. Lotus Mahal, an example of the latter, was designed with Islamic curves and arches topped with shikharas, typical towering feature of a Hindu temple.

The ruins of the Vijayanagaran capital, still rich with invaluable heritage despite having been sacked by the Deccan sultans, were an impetus for Chhatrapati Shivaji of the Maratha dynasty to launch a Hindu revival across the subcontinent. The dynasty would later regain areas previously under the Mughals, and reverse the balance of power in favor to the Hindus. Domingo Paes was right when he compared Vijayanagara with Rome, for the medieval Indian empire caused political ripples in the region even long after its collapse, just like Rome. 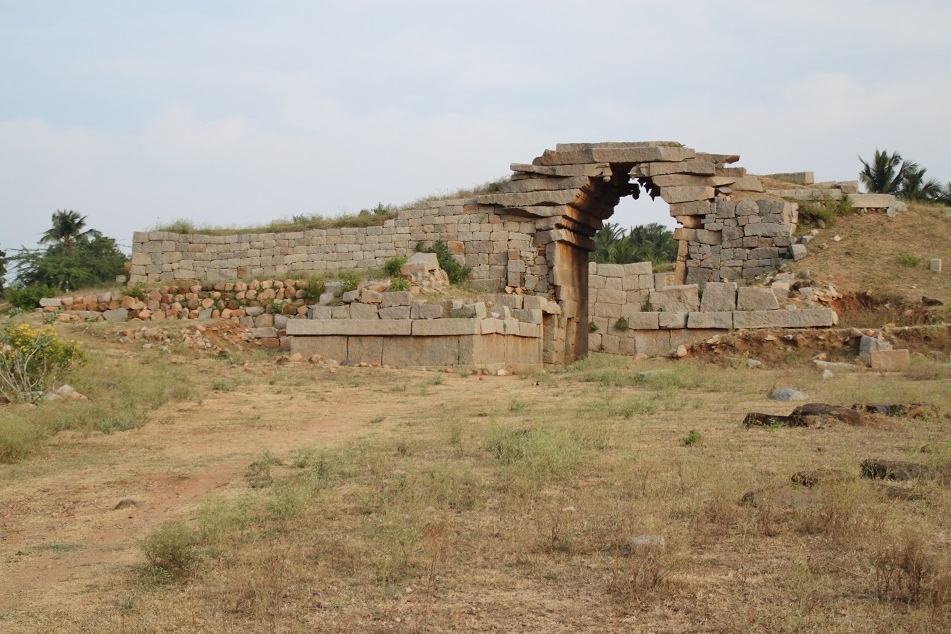 Bhima’s Gate, One of the Main Ancient Gates to Vijayanagara’s Capital

The Slaying of Kichaka by Bhima, Bhima’s Gate 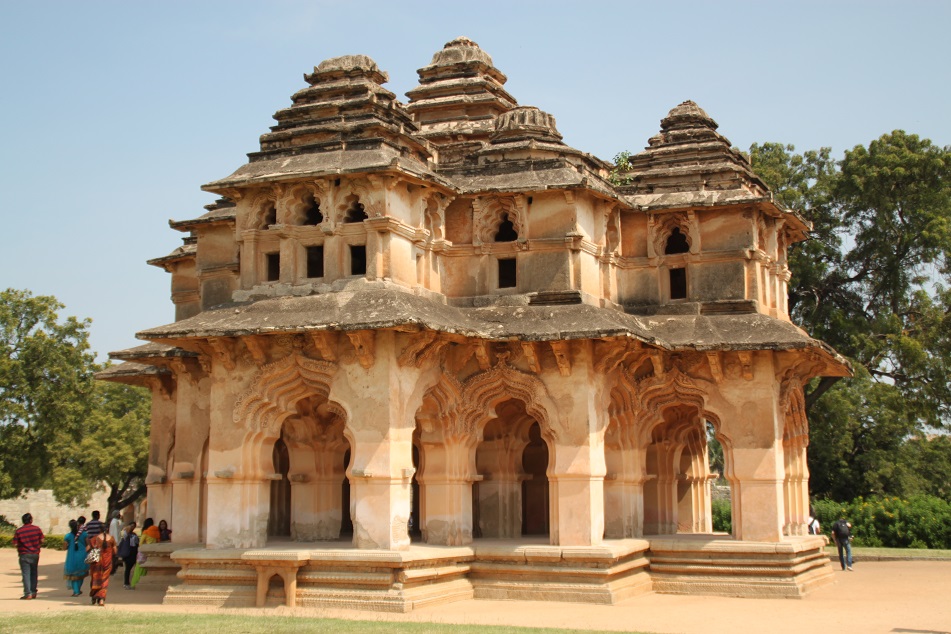 Lotus Mahal, An Amalgamation of Dravidian and Indo-Saracenic Architectural Styles

A Smaller Watchtower within the Zanana Enclosure 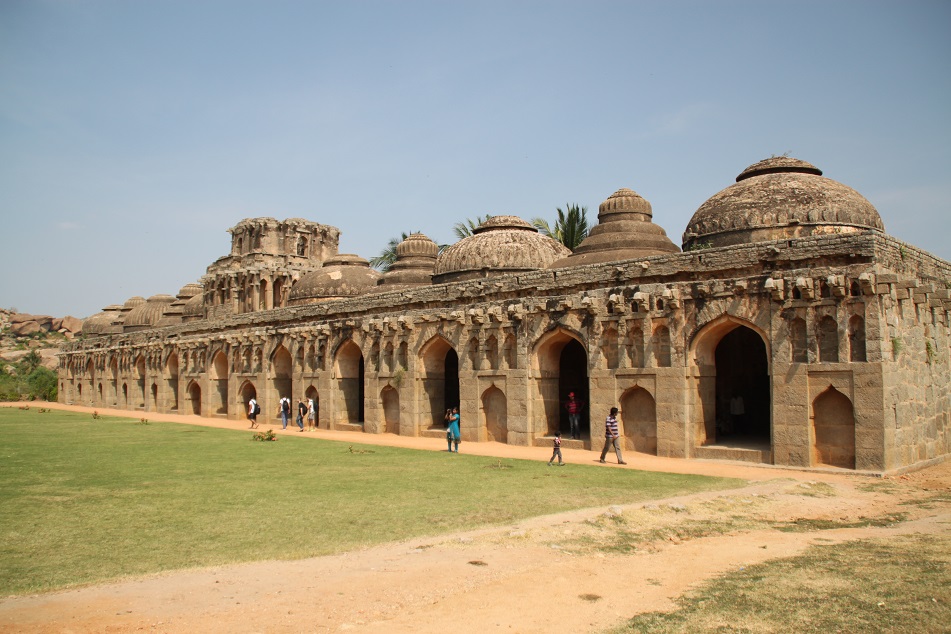 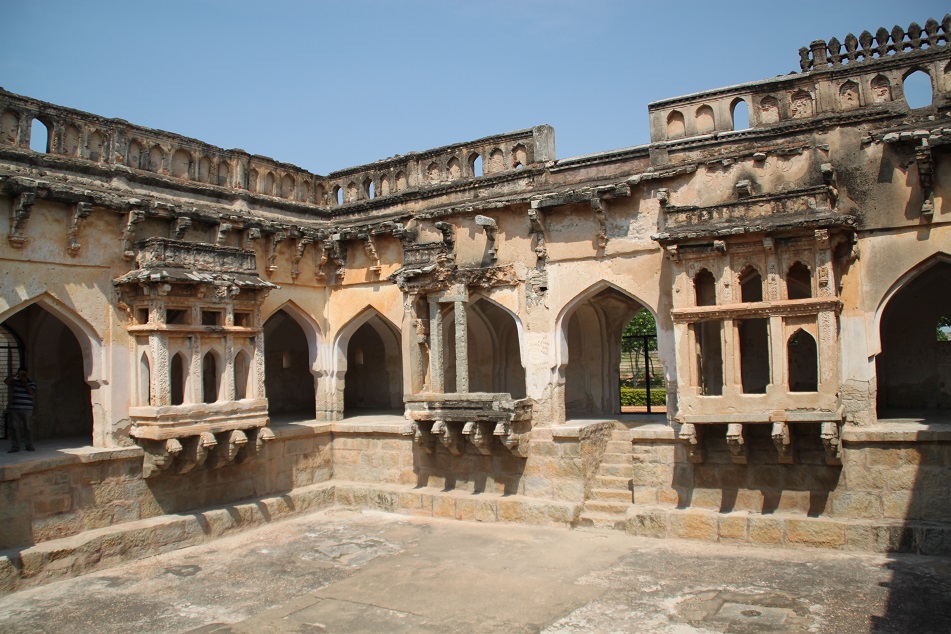 Queen’s Bath, Another Indo-Saracenic Structure within the Enclosure

39 thoughts on “Vijayanagara: the Legacy”