Spread over a basin fringed by Mount Gede and Mount Salak, Bogor lies 54 km south of the Indonesian capital, Jakarta, which together with the nearby cities of Tangerang, Bekasi and Depok form one of the world’s biggest urban agglomeration with a combined population of more than 27 million people.

However unlike its industrial neighbors to the north, Bogor is known for its year-round temperate climate, thanks to its geographical position. Formerly known as Buitenzorg, Dutch for ‘without a care’ or ‘sans souci’, the then small retreat town captivated Gustaaf Willem van Imhoff, who served as the governor-general in the Dutch East Indies from 1743 until his death in 1750, and inspired him to build a residential building at a picturesque, forested area in town.

The forest was in fact man made, established by Prabu Siliwangi of the Sunda Kingdom around the late 15th to early 16th century to conserve rare seeds. Van Imhoff, who drew the sketch of the building himself, took the Blenheim Palace in England as his inspiration. Unfortunately he didn’t live long enough to see its completion.

In the many years that followed, the mansion saw turns of event which caused damage to it (the four-year Banten uprising from 1750 to 1754), expanded it (wings added during Willem Daendels’ administration from 1808 to 1811), added a botanical garden to its grounds (commissioned by Godert van der Capellen in 1817), rattled it to the ground (a powerful earthquake on 10 October 1834), and rebuilt it into a Neoclassical palace (during the administration of Albertus Jacobus Duymaer van Twist from 1851 to 1856).

From 1870 the Buitenzorg Palace became the official residence of the Dutch governor-generals until the Japanese takeover in 1942. Today the elegant building is one of the six presidential palaces of Indonesia and acts as a focal point for the bustling city of Bogor, arguably its most prominent landmark.

One of Indonesia’s Six Presidential Palaces

A Well-Manicured Section in the Botanical Garden 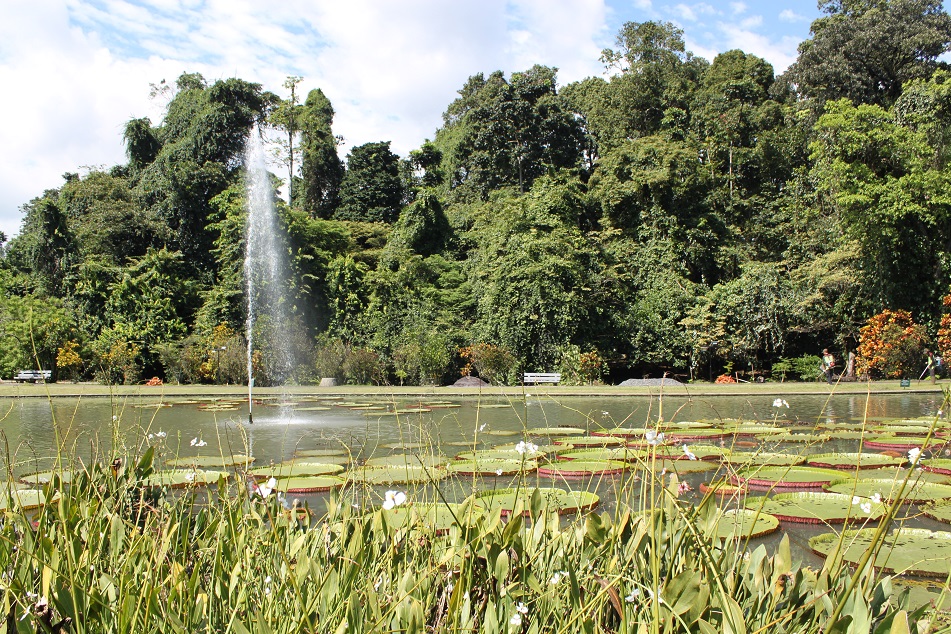 One of the Fountains in the Garden 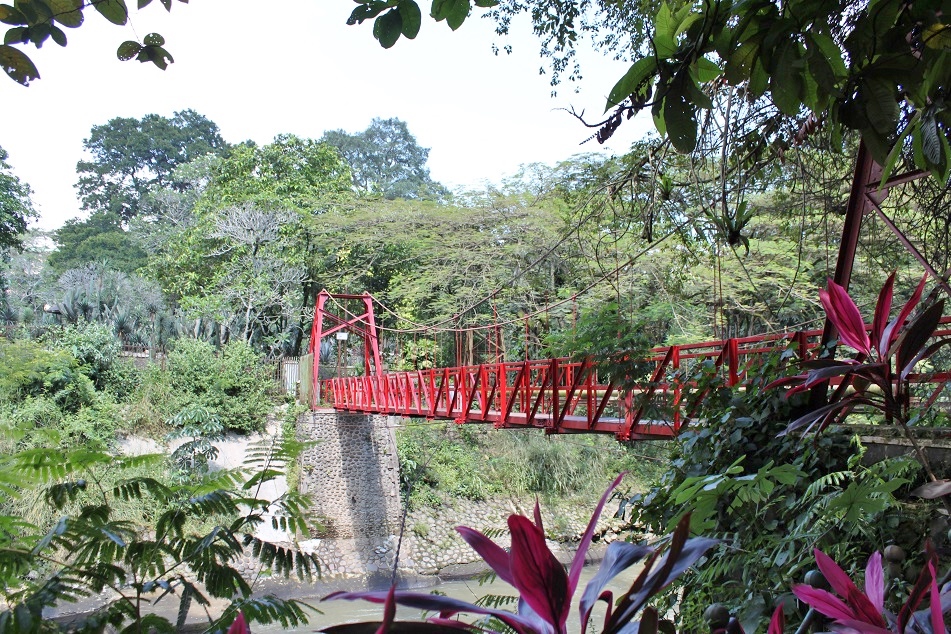 Cacti in the Mexican Section

On a Monday morning in March, James and I meet up with two local bloggers, Badai and Bartian, who guide us to explore the palace’s backyard that is the Bogor Botanical Garden (Indonesian: Kebun Raya Bogor). The 87-hectare botanical garden boasts a vast collection of plants as well as vestiges from the Dutch and British colonial times, and even a few artifacts from a long-lost Sundanese Hindu kingdom.

A Dutch cemetery and a number of research laboratories inside the garden are reminders of the time when the European colonial power controlled Java and other islands what today make up most of Indonesia. On the other hand a memorial for Olivia Mariamne Devenish, the wife of Thomas Stamford Raffles, who died of malaria, stands near the main entrance to the botanical garden; a testament to the brief British colonial rule on the island.

The botanical garden is home to various species of orchids, dipterocarps, as well as the world’s largest flowers from the genera of Rafflesia and Amorphophallus known for their putrid odor, among other plants. The odor gives the flowers a collective nickname in Indonesian: bunga bangkai, ‘corpse flower’.

Bartian takes us to a fenced area where nothing but small signboards dot the grass. “When in season, the Amorphophallus bloom here,” he says. While in another corner of the garden he points out a tree whose winged seeds provide visitors with a toy to play. This time, however, I can only learn how it looks from the photo on a nearby signboard and imagine how the curiously-looking seed swirls through the air on its journey to reach the ground. 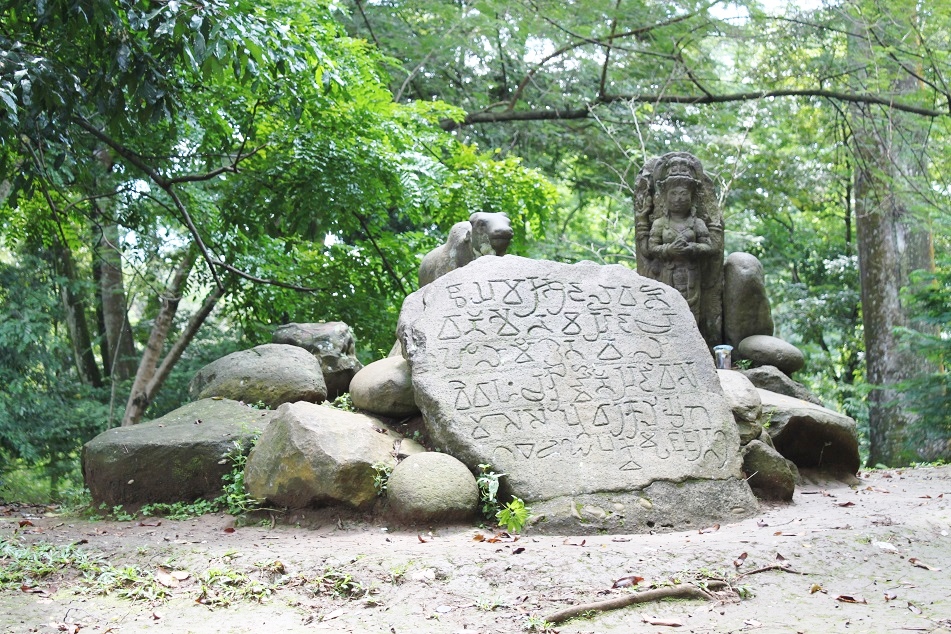 Ancient Hindu Statues next to A 19th-Century Inscription 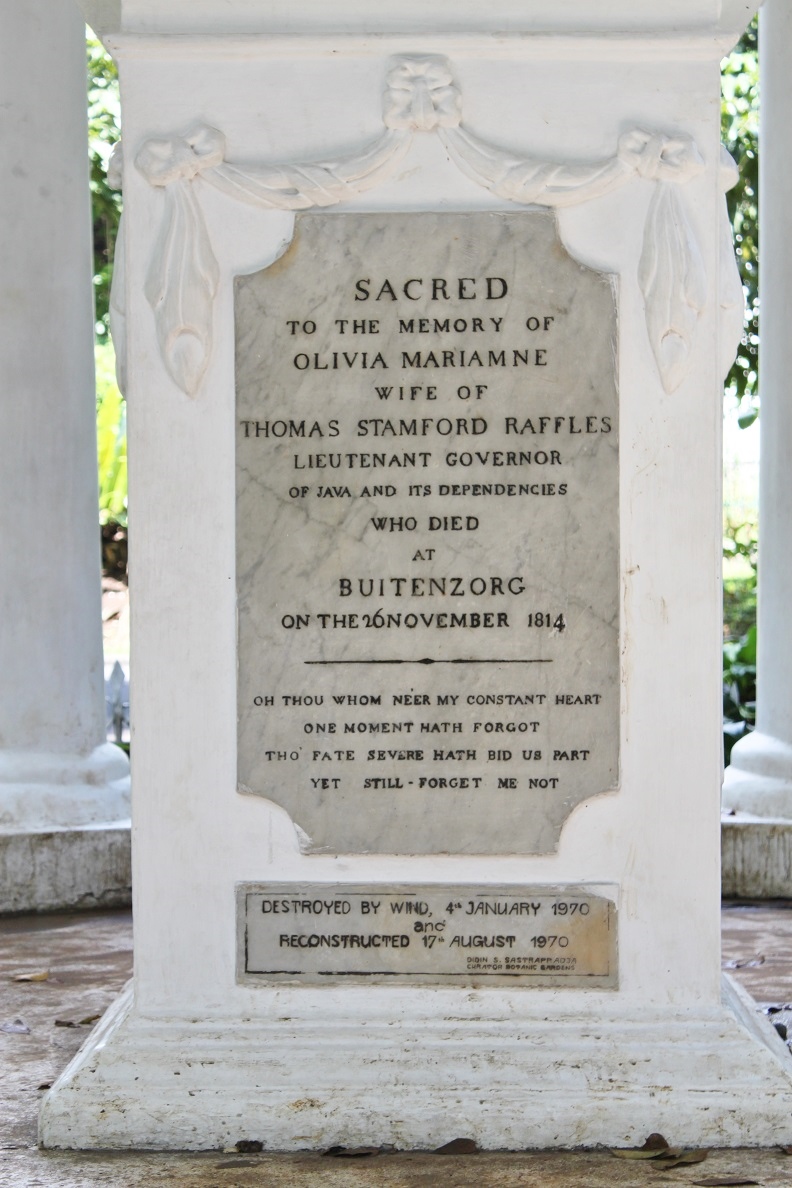 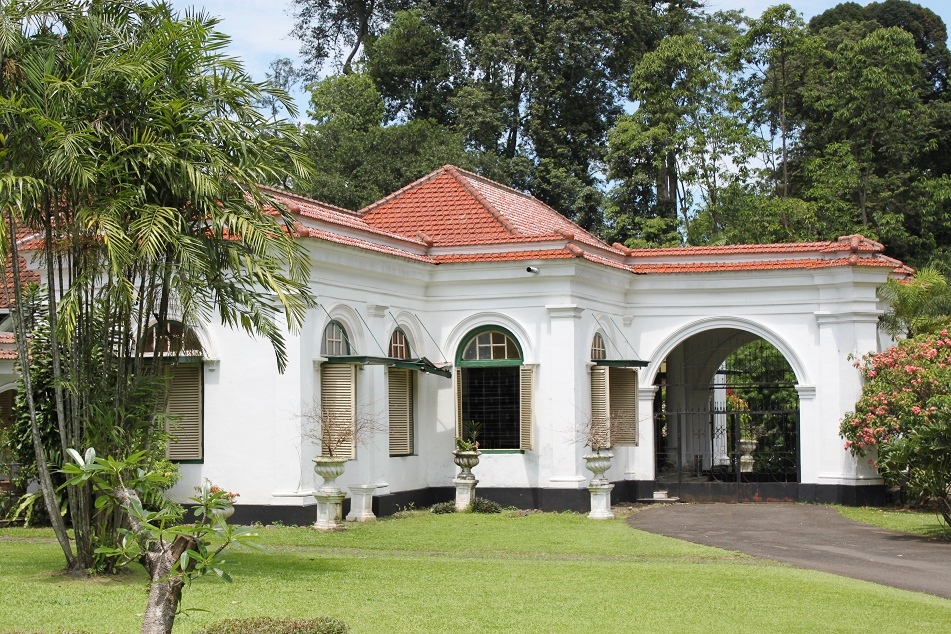 Tucked away amidst the greenery is the Museum Zoologi, founded as a zoology laboratory in 1894 by a Dutch botanist, Jacob Christiaan Koningsberger. Housing a considerable amount of preserved animals, the museum not only does provide a glimpse of the diversity of fauna in the Indonesian archipelago, but also sends a chilling message of how many species we have lost forever due to plain ignorance.

I have seen gleeful Bali starlings with their inquisitive look around visitors at the Edward Youde Aviary in Hong Kong, so to see it dead, preserved, and displayed behind glass in the museum gives me such a strange feeling. However the most somber and eye-opening collection of the museum is its lone Javanese rhino, the last of such species outside the protected Ujung Kulon National Park on the western tip of Java, captured and brought to the museum in 1934 to prevent poachers from collecting its horn.

The most famous collection of the museum is displayed at a shaded semi-outdoor hall: a long giant skeleton of a blue whale. It was found washed ashore on the southern coast of Java in 1916 and it took 44 days to transport the skeleton to Bogor. Standing underneath the behemoth provides anyone with the sheer scale of the animal’s immensity.

Our visit to the museum ends just about lunchtime, and having locals with you is always the best way to explore a place’s local dishes; we head to a food center not too far from the botanical garden to taste some of them. Soto mie‘s multitude of ingredients, from rice-noodle-filled risol (fried pastry) and noodles to beef, tripe, tomatoes, and spices, really is comfort food during the sudden, but not surprising rain that pours over the city, for Bogor is known as kota hujan, ‘rain city’.

For dessert, we have es goyobod, which is increasingly hard to find in town. Made from goyobod (starch pudding cut in cubes), cincau (grass jelly), shaved young coconut, sweetened black sticky rice, and pacar cina (literally ‘Chinese lover’, a bright-red starch-based pudding), it is surprisingly a very satisfying bowl of guilty pleasure.

Before leaving for Jakarta in the afternoon, they take us to probably one of the most famous places in Bogor to get asinan, assorted cut fruits or vegetables or both served with sour and spicy soup, and to another dessert place to have bubur buah, a bowl of yogurt with cold fruits. “If only you had more time we would take you to a pura to watch the sunset,” Bartian says, referring to the biggest pura (Indonesian Hindu temple) outside Bali, not too far from the city center.

However the thought of getting stuck for hours in Jakarta’s notorious rush-hour traffic makes us decline the offer, for now. One day we will return, one day.

Animal Skeletons inside the Zoology Museum 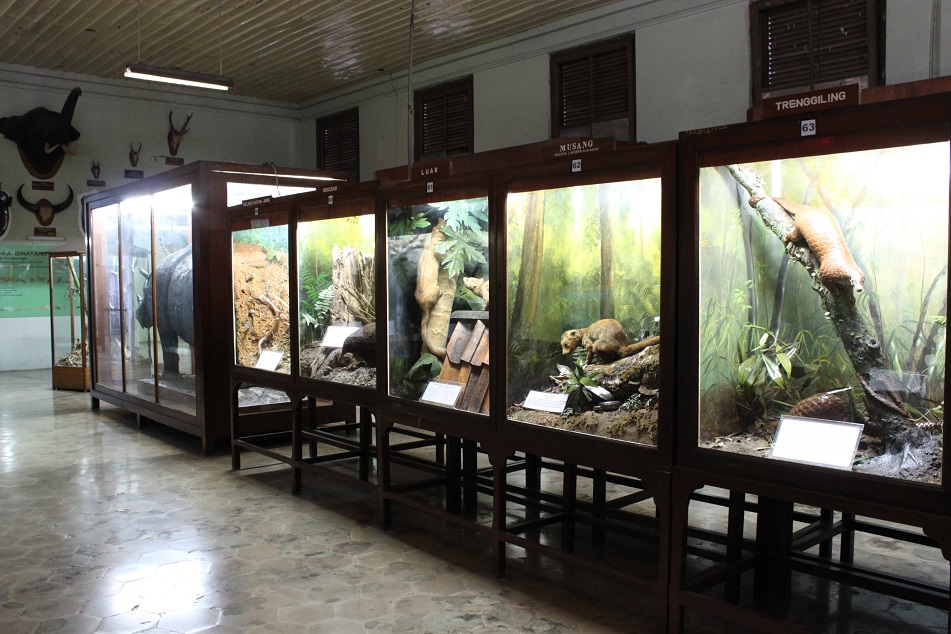 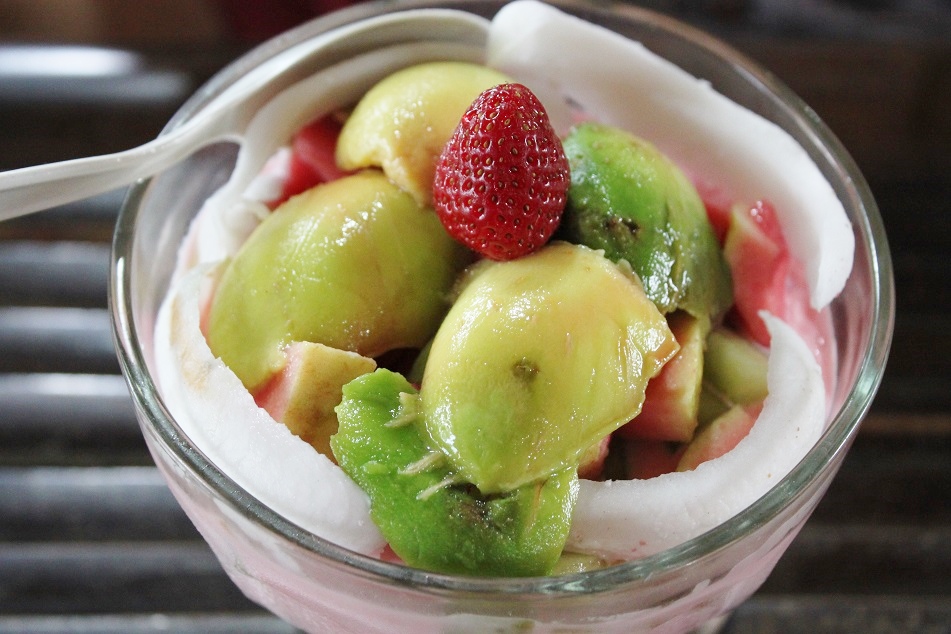 Fruits and Yogurt in Bubur Buah

This is the last post on this blog before I start the six-month journey through Southeast and South Asia starting from July 1. You can expect to read one post every month while I’m away, each from my past travels which I have yet to publish. In the meantime, follow my journey on twitter (@harindabama) and maybe we will bump into each other in the upcoming months. Stay healthy and keep traveling!

61 thoughts on “Bogor at A Glance”