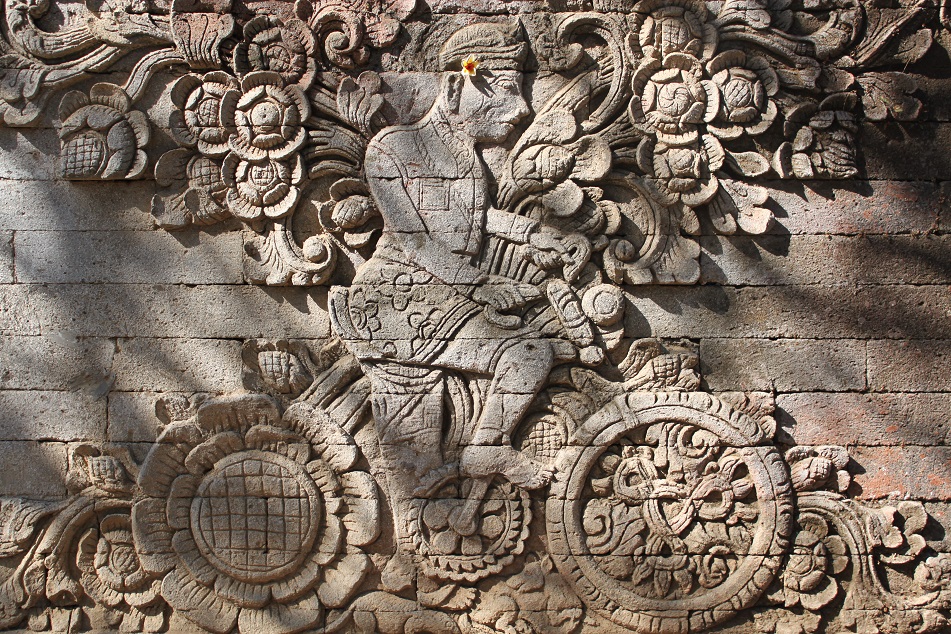 A Depiction of W.O.J. Nieuwenkamp

Far from the bustling tourism hotspot in Bali’s south is the city of Singaraja, the capital of Buleleng Regency on the island’s northern coast. Founded by the king of Buleleng, Ki Gusti Ngurah Panji Sakti, in 1604 on an empty grassland surrounded by buleleng – corn-like shrub widely planted by local residents at that time – the city, literally ‘Lion King’ after the indomitable ruler, gained prominence during Dutch colonial period on the island.

Following their successful campaigns using divide et impera (divide and rule) strategy to gain more control of regions across the Indonesian archipelago, in 1846 the Dutch eventually launched a military intervention to control Bali, still very much independent at that time but engulfed in conflicts among small kingdoms on the island.

But it was not until the third attempt in 1849 that the Dutch eventually defeated the Kingdom of Buleleng with the help of the Kingdom of Bangli, Buleleng’s long fierce rival, which almost six decades later was also subjugated by the European power when they gained full control of the island by 1908.

Following the conquest, Singaraja was chosen to be the seat of the Dutch colonial administration in Bali and the Lesser Sunda Islands – a group of islands what today consists of Lombok, Sumbawa, Sumba, Flores, West Timor and other smaller islands.

During the successive Dutch military campaigns a self-taught artist from Amsterdam by the name of  Wijnand Otto Jan Nieuwenkamp visited Bali in 1904, the first ever European artist to visit the island. His fascination for the local culture and art sparked curiosity from other artists who would soon follow his footsteps and find their own way to the island.

His presence in the northern coast of Bali seems to leave a long-lasting impression to the locals who then immortalized the foreign artist in stone relief at Pura Meduwe Karang, a Hindu temple dedicated to Batara Meduwe Karang (God of the land). The small temple, 12 km east of Singaraja, was built to protect the soil and crops of the village of Kubutambahan, which more than a century after the Dutch artist’s visit are still as prolific as they have always been.

A Tower Adorned by Characters from Hindu Mythologies 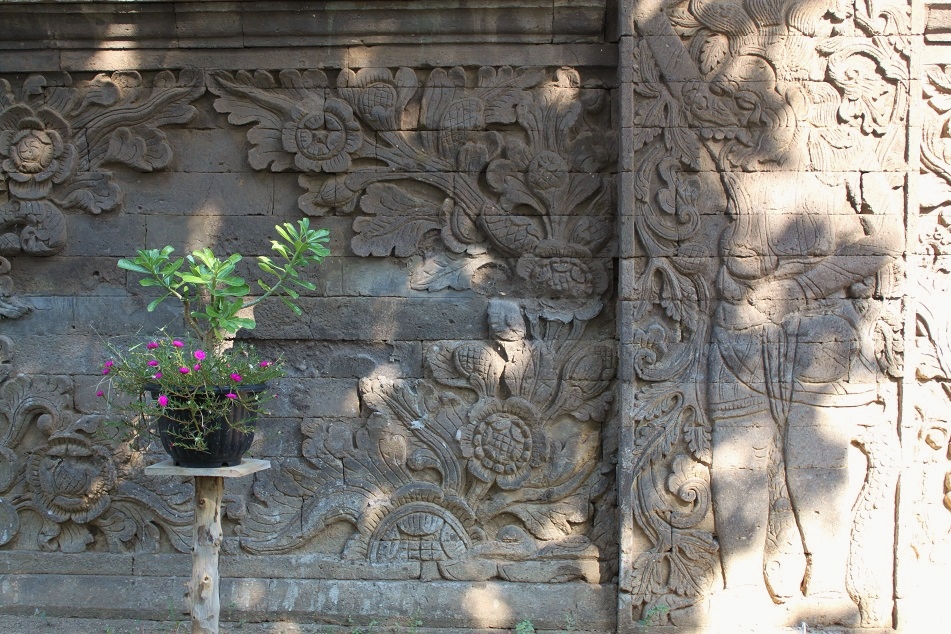 Potted Plant in front of An Unadorned Section of A Wall

A more descriptive depiction on how life was like in the time of Dutch military campaigns is evident at Pura Dalem Jagaraga, 11 km east of Singaraja, where reliefs of Dutch military aircraft, soldiers, and a Ford Model T adorn the temple’s walls, alongside with portrayals of the island’s bucolic scenes during the tumultuous period.

However it was the temple’s caretaker, an elderly man with the smile and demeanor so radiant and warm, those of the people much younger than him, who was the highlight of our visit to the relatively unknown temple. He welcomed us with a big grin, alone on the temple grounds despite the fact that it coincided with the annual tourist surge flocking to Bali’s ever crowded south and beyond.

Speaking with a melodious Balinese accent, he explained to James and I in both Indonesian and English not only the history of the temple itself, but also the tenets of Balinese Hinduism – an eclectic concoction of Indian Hinduism, local traditions, and pre-Hindu beliefs.

When Bali was under the control of the Java-based Majapahit kingdom, the last major Hindu power in Java before the religion’s decline in the 16th century, the royal court of Majapahit instructed all village elders in its territory to build three temples in each community: Pura Desa (village temple), Pura Dalem (funerary temple), and Pura Segara (ocean temple), dedicated to Brahma, Shiva, and Vishnu respectively.

He eloquently explained about the aspects of ngaben – Balinese elaborate funerary ceremony, as well as the concept of Balinese deities which in many ways is similar to one in India except for the notion of a central supreme being called Sang Hyang Widhi Wasa or Acinthya from whom all gods take individual manifestation. He, too, elucidated Balinese take on reincarnation.

“Did you see the relief of a man eaten by a giant crocodile before you came in here?” he asked us with an inquisitive yet jovial tone.

The relief depicted karma, as the caretaker put it in words: what a person would become in his next life.

“There are seven levels of karma. What one does in his current life determines what he will become in his next life,” he paused and continued with an amusing explanation. “If he does good things in life, he will go up to the next level. But if he does bad things he will reincarnate as a mosquito.”

“It is everyone’s dream to reach the highest level. And when he has reached that, he will no longer reincarnate. He has achieved moksha,” the old gentleman explained to us about the state when someone has reached the heaven, or nirvana, liberated from the cycle of rebirth and death.

Then he moved to another topic: how to read a Balinese temple. 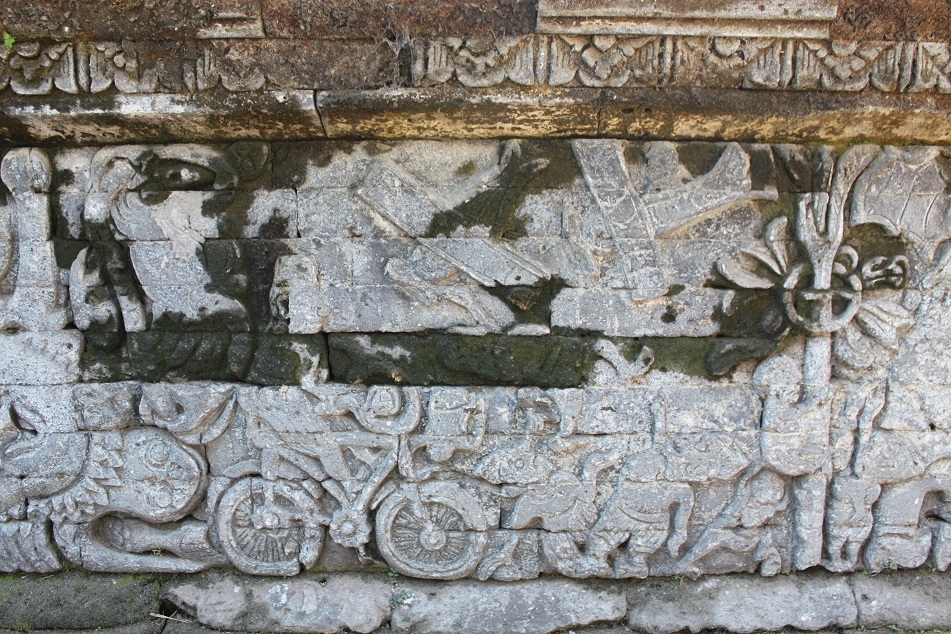 A Dutchman Riding His Car

Pura – Balinese Hindu temple – is one of the most ornately decorated religious structures one can find in the archipelago, and Pura Dalem Jagaraga’s caretaker enlightened us with the macro- and microcosm aspects of a pura.

A candi bentar, or split gate, is a prominent feature in most temples usually located at the entrance to a temple compound. A symbol of yin and yang, good and evil, positive and negative, inspired by the story of the day Shiva broke a mountain in half with his power. Hence the almost identical right-angled twins.

Then the kori agung, a meticulously carved mountain-like divider separating the first and second courtyards in a typical three-part pura. Pura Dalem Jagaraga, however, only has two courtyards, exposing the kori agung to the direct surrounding of the temple.

By this time the amount of information on Balinese Hindu belief, culture, and architecture had far exceeded what I learned from my previous trips to places on the island, and started to overwhelm me.

The gentleman seemed to notice that, then retreated to a bale – a typical Balinese shaded pavilion – and unfolded two pieces of photocopied papers. One was written with the history of Pura Dalem Jagaraga, while the other was on Balinese concept of the nine directional elements and each corresponding deity, seven layers of the universe, the manifestations of Sang Hyang Widhi Wasa, and a swastika – a traditional symbol for Hinduism.

He handed the papers to us, with his name written at the right bottom: KT Suradnya. Later we found out, KT stood for Ketut, like Ketut the medicine man made famous by Elizabeth’s Gilbert bestselling book Eat, Pray, Love. Both has similar lighthearted attitude, and both helped enlighten their visitors to many aspects of the unique religion that has shaped the island’s landscapes, both natural and cultural, into a beauty as the world knows it. 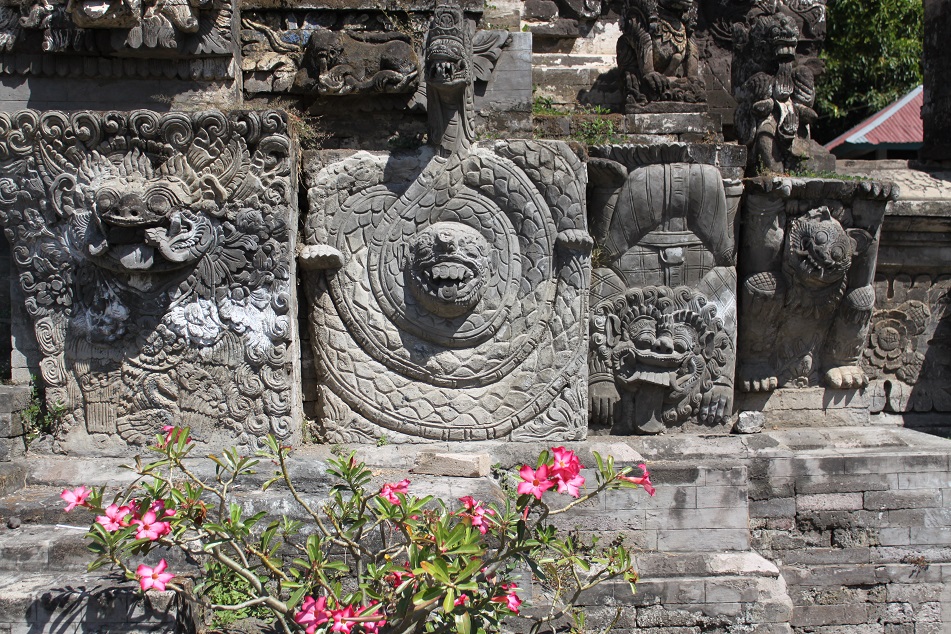 Head of Kala, A Hindu Personification of Time 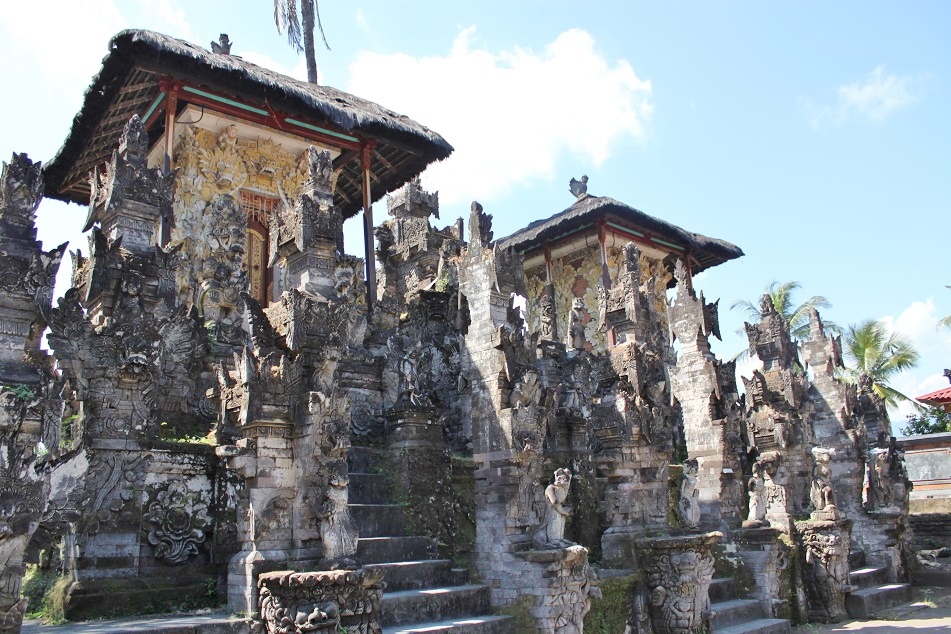 Two kilometers from Pura Dalem Jagaraga another uncommon temple awaits to be explored. Made from pink sandstone, Pura Beji is a Subak temple for the village of Sangsit, a manifestation of Tri Hita Karana philosophy to keep the village’s fields fertile and well-irrigated. Dewi Sri, a pre-Hindu Javanese-Balinese fertility goddess is worshiped at the temple to ensure perpetual good harvests in the village.

As we jumped out of our car and walked towards the temple’s entrance, a strong, familiar scent filled the air, emanating from an open ground next to the temple. Cloves were drying in the sun, an essential ingredient to make kretek, a type of cigarette distinctively Indonesian known for its fragrance and rich blend of flavors.

We saw no one at the first courtyard, but the temple was clearly well-kept. No wild overgrown shrub, only the beautiful pink hue radiating from the temple’s kori agung and inner sanctums. As we ambled along the grass pathway two little girls were running around and laughing, their eyes fixated to us. Unlike the local girl I met at Besakih who was persistent in selling trinkets, the presence of the little girls at Pura Beji felt more of a curiosity from the locals of the people visiting their comparatively deserted temple. Their kind eyes spoke the unspeakable words.

We took photographs of the ornately carved structures, taking advantage from the absence of other visitors at the temple apart from a young couple, presumably Europeans.

The girls kept playing and laughing not far from us.

“She wants to put a flower on your ear,” our driver, Bli Komang, said to me. “But she is very shy.”

I smiled at her, and she smiled back, albeit timidly.

Pura Beji’s impressive and meticulously carved reliefs are surely a sight to behold. But it was here, far from the constantly pulsating south, did I find unspoiled Bali all culturally-inclined visitors dream of seeing, and could also be quite the same ambiance that enthralled W.O.J. Nieuwenkamp himself. That, however, is likely to change sooner or later as plan to build Bali’s second international airport – much needed to keep up with the ever-growing influx of visitors – was unveiled by the central government a while back.

But is more tourists what Bali really needs? Or is it a more sustainable way to keep up with the demand without sacrificing the island’s charm that Bali actually has to focus on? The upcoming decade certainly will be a critical time for the island and its people, for the future of the abode of gods lies in their hands. 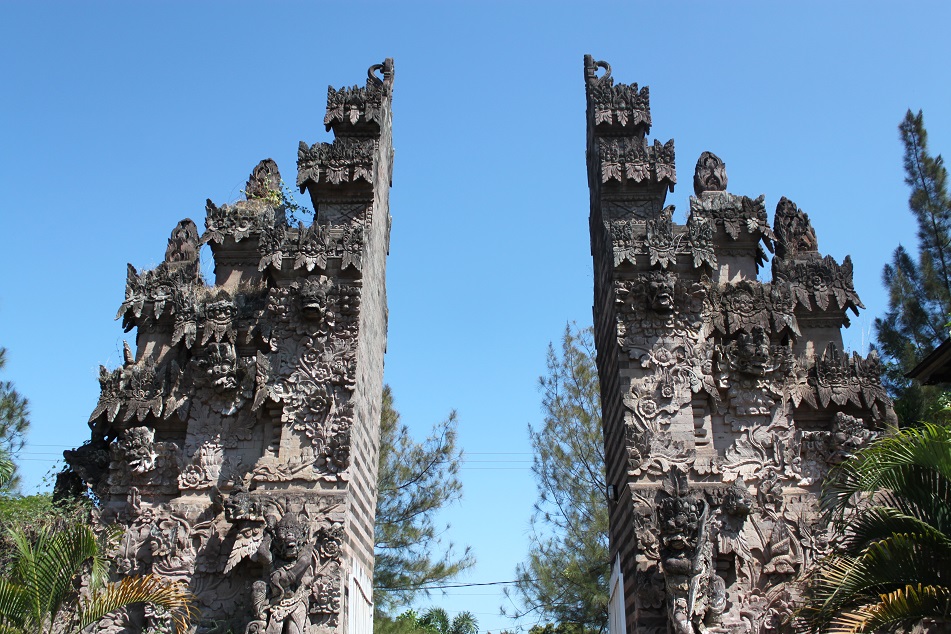 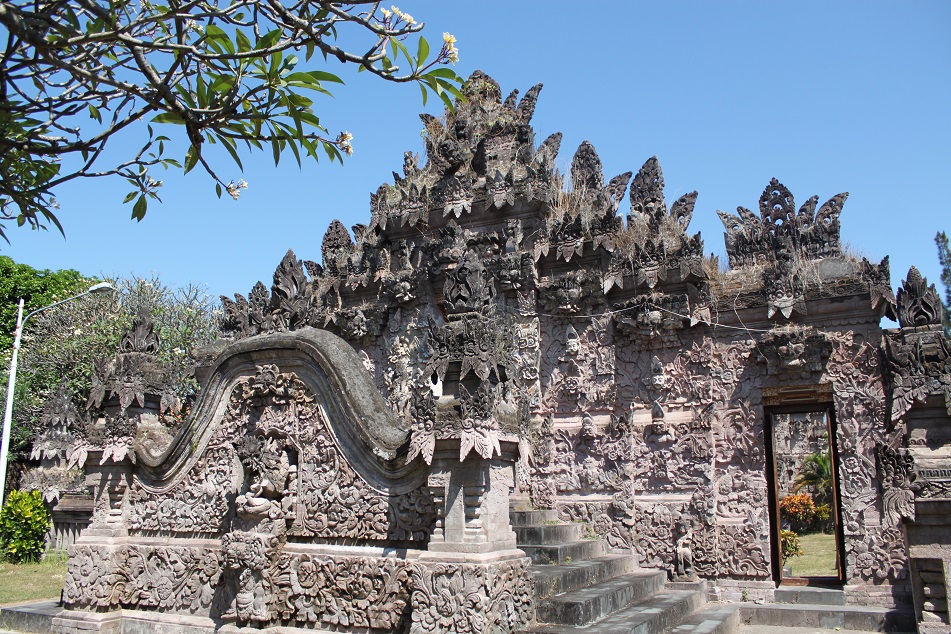 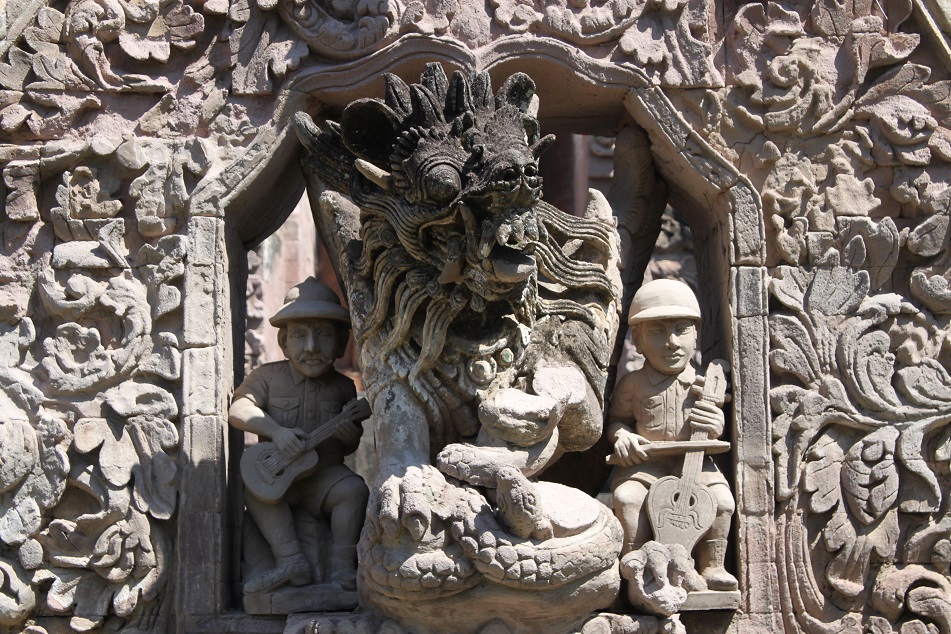 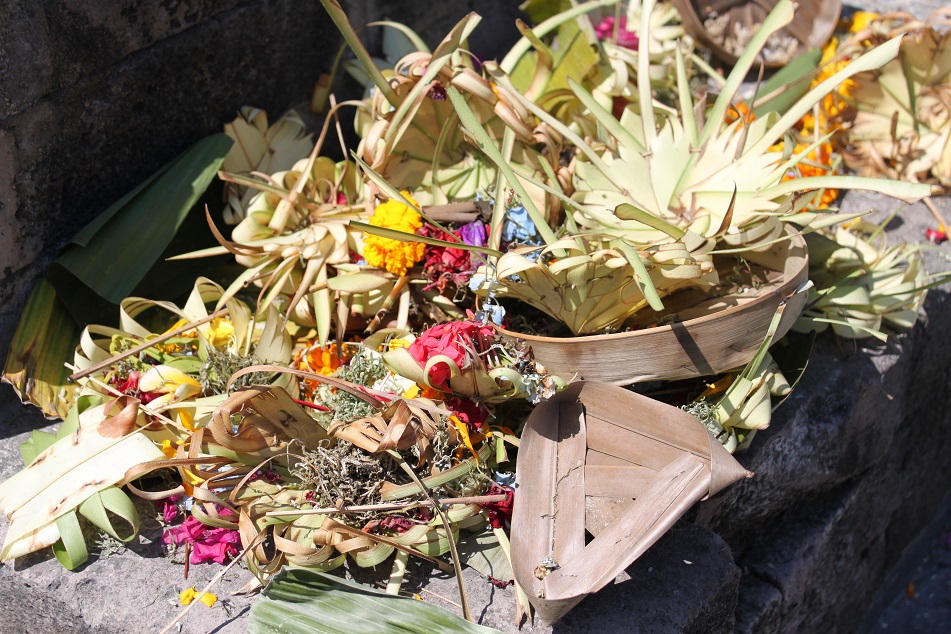 47 thoughts on “The Dutch, the Caretaker, and the Little Girl”