The Philippines is one of the countries in Southeast Asia that I want to visit (well, actually I want to go to all countries), mainly because it is a less popular holiday destination for Indonesians, compared to Singapore, Malaysia, Thailand or Vietnam. I have heard stories from my friends about those places, but never about The Philippines. That’s why one day I searched for a cheap flight from Jakarta to Manila in order to see and feel Manila myself, and I got one! I booked a Cebu Pacific Air return flight, which is Philippine’s low cost carrier and largest airlines.

It was not until recently when my trip to Manila finally came true. It was a very short trip though, only during the weekend. Therefore I tried to make the best of my trip to see and feel Manila. Manila is a very big city, in terms of population and area, and I underestimated this on my first day (later about this). I took a Lonely Planet Southeast Asia on a Shoestring guidebook and it helped me with two things. The first is about which taxi that I should take from airport to the city, the other is about how much I should pay to hire a guide at the Chinese Cemetery.

The first place which I visited was Intramuros. 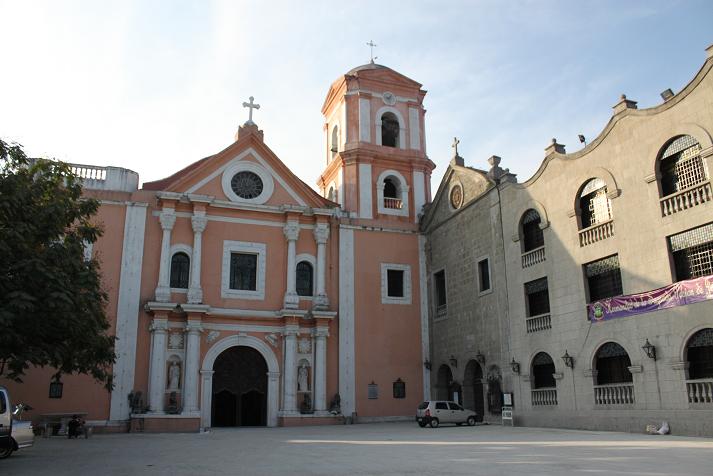 After walking around Intramuros, I decided to visit Chinese Cemetery. From Intramuros I took a walk to Binondo to get to the LRT. Along the way I saw these beautiful buildings: 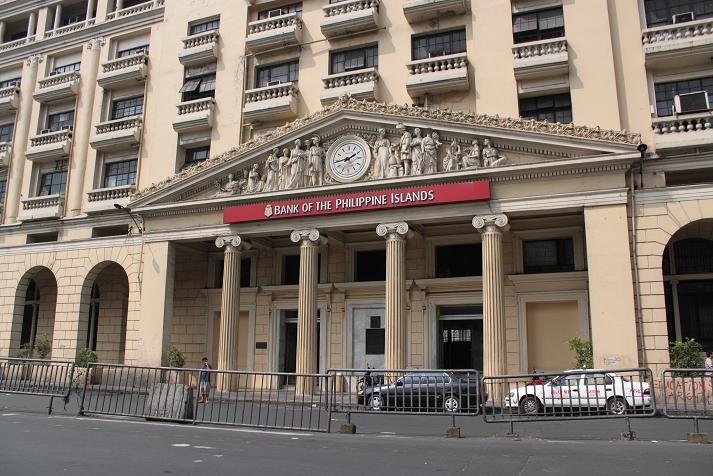 Bank of The Philippine Islands’ Office

And also colorful Jeepneys, Philippine’s unique public transport which used to belong to The American troops during their occupation:

A Jeepney with An Old Building at The Background

I took the LRT from Carriedo station to Abad Santos station. From Abad Santos you can go to the Chinese Cemetery by tricycle or on foot. If you choose the later (like I did), don’t forget to turn left once you’re out of the station and on the street. Tricycle drivers will shout at you hoping you will hire them. It took me about 10 minutes to get to the South Gate of the cemetery. After being asked briefly by the security guard then I hired a guide. You don’t have to bargain as they will tell you to pay them as much as what Lonely Planet stated in their guidebook (to hire a guide you have to pay around 350 pesos). I was lucky to hire this particular guide named Rodolfo. He has been the caretaker of the cemetery for 20 years, so he knows every single story of the tombs in this place. I can give you the contact number of Rodolfo (also called Ruding). Just let me know if you need it and I’ll email it to you.

What’s interesting about this Chinese Cemetery is due to its collection of lavish and expensive tombs. Here are the features of some of the most expensive tombs: chandelier, aircon, toilet, marble tomb, steel tomb, garden, etc. 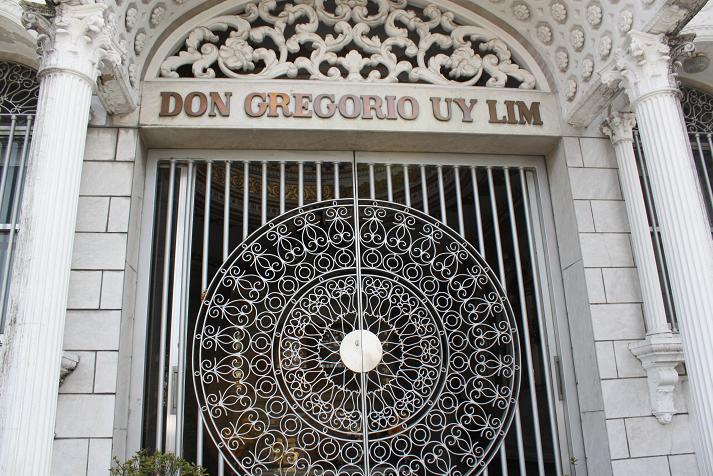 One of The Tombs of Rich Chinese People

More stories about this place in my other post.

After seeing those tombs of rich Chinese people, I decided to go to the hostel to check in. I took the LRT from Abad Santos station to EDSA station. From there I took the MRT from Taft Avenue station (which is accessible from EDSA station through Metro Point Mall) to Guadalupe station, and that was the biggest mistake that I did in Manila. From the map I can see that Guadalupe station is very close to Makati Avenue (where the hostel is located). But I forgot to check the scale. Hence from Guadalupe station I had to walk like forever to get to Makati Avenue. Well, actually some people that I asked at Guadalupe told me to take the Jeepney, but I refused and chose to walk instead. Wrong decision! After a very long walk, finally I arrived at the hostel which is located at the 18th floor of an apartment. It is a small hostel actually, but luckily the staffs are very nice and helpful. And by the way, each bed has its own curtain, good for you who need a little privacy. You can use the swimming pool and gym area of the apartment. Just ask the staff how to use them.

Fatigue and exhausted, I fell asleep after taking a shower and woke up just in the afternoon. I took a walk around Makati Avenue, which is the financial district of Manila (skyscrapers everywhere). But first, I stopped at a local fast food restaurant and ordered rice with tomatoes and bangus (fried fish) plus pineapple juice. What a pleasant dinner after a tiresome day! 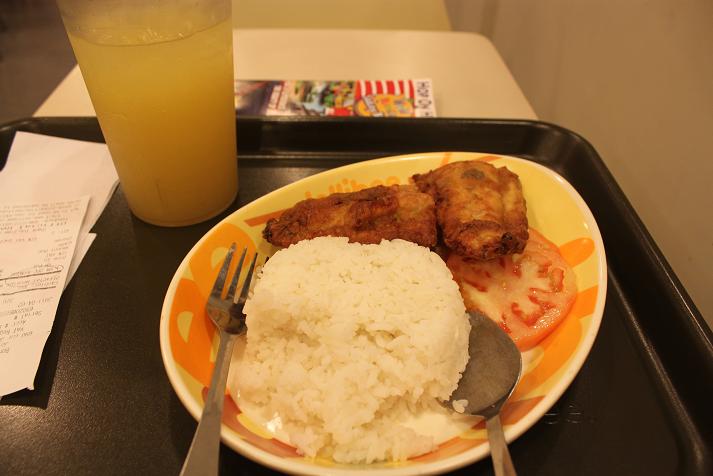 These are some interesting places along Makati Avenue:

Ayala Triangle Gardens at The Heart of Makati Avenue 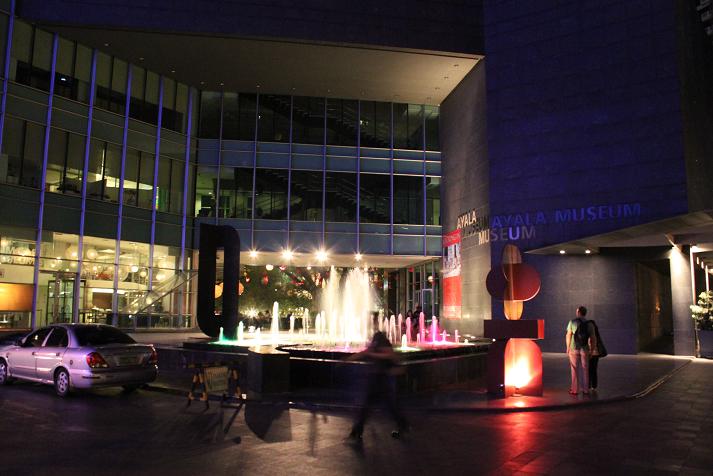 In the second day I went to Rizal Park in the moring and saw what the Filipinos usually do in Sunday morning. Here are some picture of interesting places around Rizal Park: 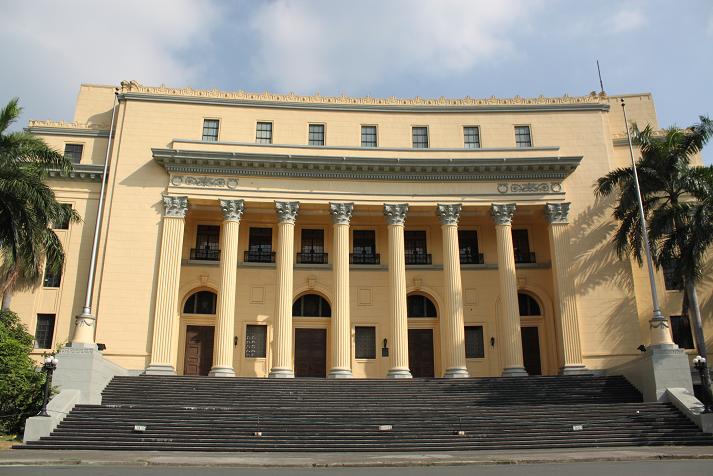 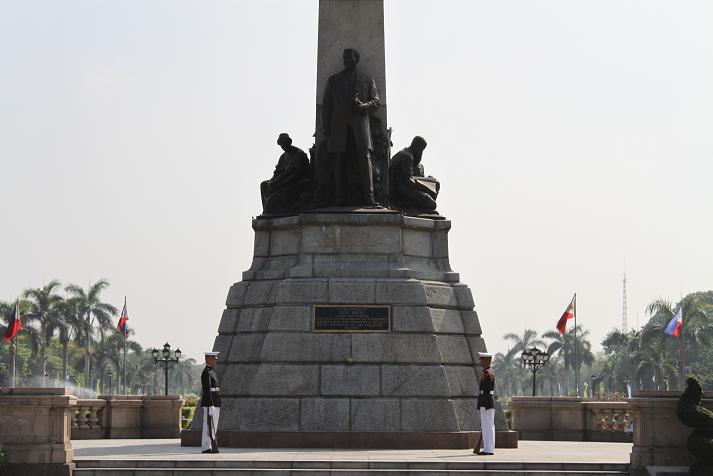 At around 10 am, I went to Ayala Museum (it opens at 10 am on Sundays). In this museum you can learn the history of The Philippines through beautiful dioramas. You can also see the collection of historical ceramics, handicrafts, etc. But in my opinion the most interesting part is the collection of gold antiquities from ancient Philippine islands. You can also watch a great movie on a widescreen which tells the story of gold in The Philippines. Unfortunately cameras are not allowed inside the museum.

From Ayala Museum, then I went to Malate and strolled down the baywalk at Manila Bay.

Here are some picture around Manila Bay: 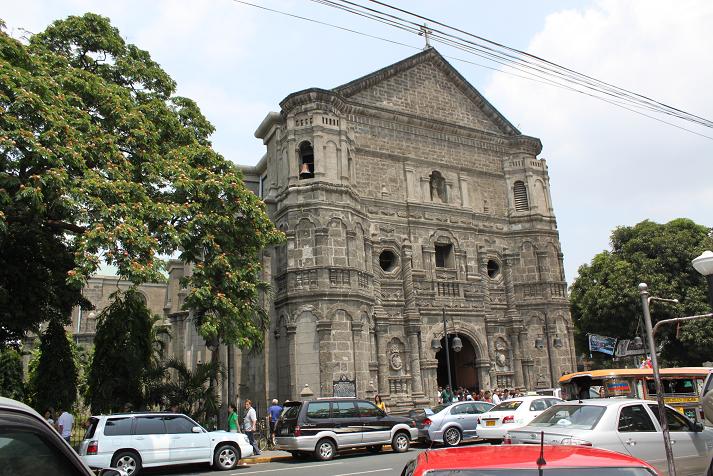 Cultural Center of The Philippines

From baywalk I went to SM Mall of Asia (one of the largest malls in Asia) to have a meal and buy some souvenirs. At the back of the mall people flocked around Manila Bay to wait for the sunset. While waiting, I bought a Philippine delicacy which I’ve been looking for: balut egg. Balut egg is a nearly hatched egg, so you can see the chicken inside. Well, it might sound disgusting but after I tried it actually it was not bad at all. It comes with sweet chilli and spicy vinegar sauce, I chose the later.

And finally, sunset at Manila Bay which wraps up my short visit to Manila. 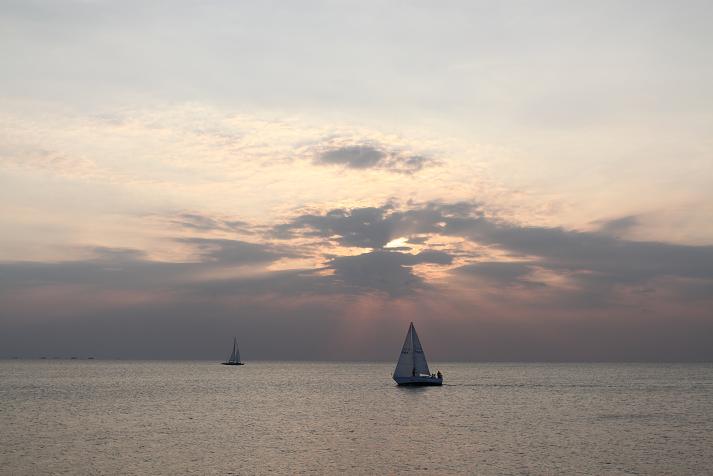 35 thoughts on “Manila: Where Spanish, American and Asian Cultures Meet”