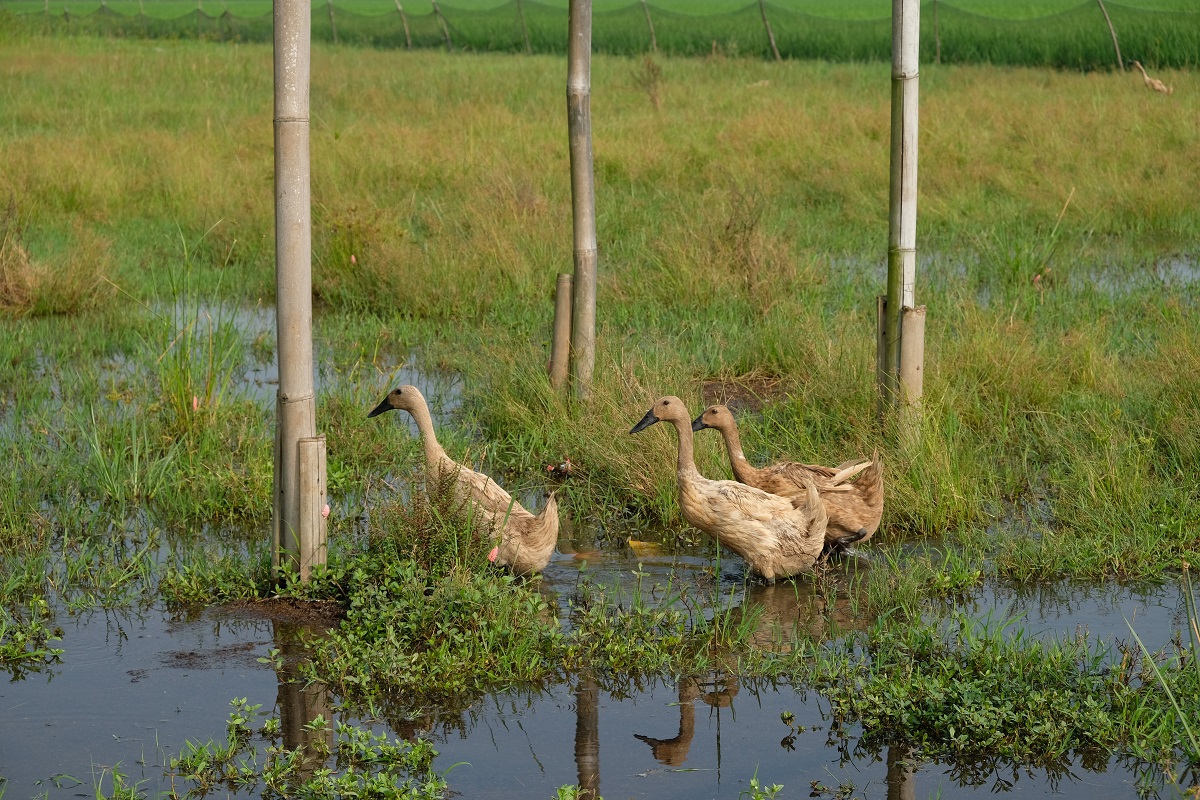 It rises conspicuously amid green rice paddies as far as the eyes can see. Rectangular in shape and made from red bricks that are much older than other structures in its vicinity, Candi Jiwa is a low-rise ruin of a Buddhist sanctuary that was long forgotten by the local people. Visiting this ancient site without having the slightest idea of what it actually is would probably lead to disappointment for some people, especially after having to drive several hours to this quiet village on the sweltering coastal plains of northwest Java – and only to find a ‘chopped off’ temple. However, appearances can be deceiving.

Arriving from the bustling metropolis that is Jakarta, Batujaya is the complete opposite of where we’ve just come from. The Indonesian capital’s sea of construction projects and towering skyscrapers has given way to endless paddy fields, which together with those of other villages and districts in Karawang (the regency that Batujaya is part of) form one of the most productive rice baskets in the entire country. It was probably the very same reason, made possible by Java’s fertile volcanic soil and many rivers, that helped support human settlements in this area over millennia.

For many generations, the residents of this village had been living around small earthen mounds, locally known as unur, not realizing what was actually hidden underneath those layers of soil until 1984. That year, local archeologists unearthed ancient structures dating back to the time when this corner of Java was part of Tarumanagara, a 4th– to 7th-century AD Hindu kingdom, whose inscriptions are some of the earliest ones discovered in what is now Indonesia. And further research has shown that some of the ancient structures of Batujaya were constructed as early as the 6th century, making them the oldest temple ruins ever found in the entire archipelago.

Subsequent excavations and studies also revealed another interesting fact: the local community had had contact with India long before the temples of Batujaya were built, as proven by the discovery of pottery shards and beads from Arikamedu. This ancient port that is now in Pondicherry, southern India, flourished between the 2nd century BC to the 8th century AD and was known to have traded with places as far as Rome. And it appears that the northern coast of West Java was also a part of their vast trade network, which consequently helped introduce religions from the subcontinent – notably Hinduism and Buddhism – to Java.

But if Tarumanagara was Hindu, why were the ancient temples of Batujaya Buddhist?

Purnawarman was probably Tarumanagara’s most famous ruler, a king who identified himself as Vishnu, one of the principal deities in Hinduism. However, according to historical records from the Sui and Tang dynasties in China, in the capital of Tarumanagara there were also animists living alongside Hindus, although Buddhism was not widely practiced. The fact that the most intact relics from this ancient kingdom are Buddhist suggests there might have been a great degree of religious tolerance during this period. 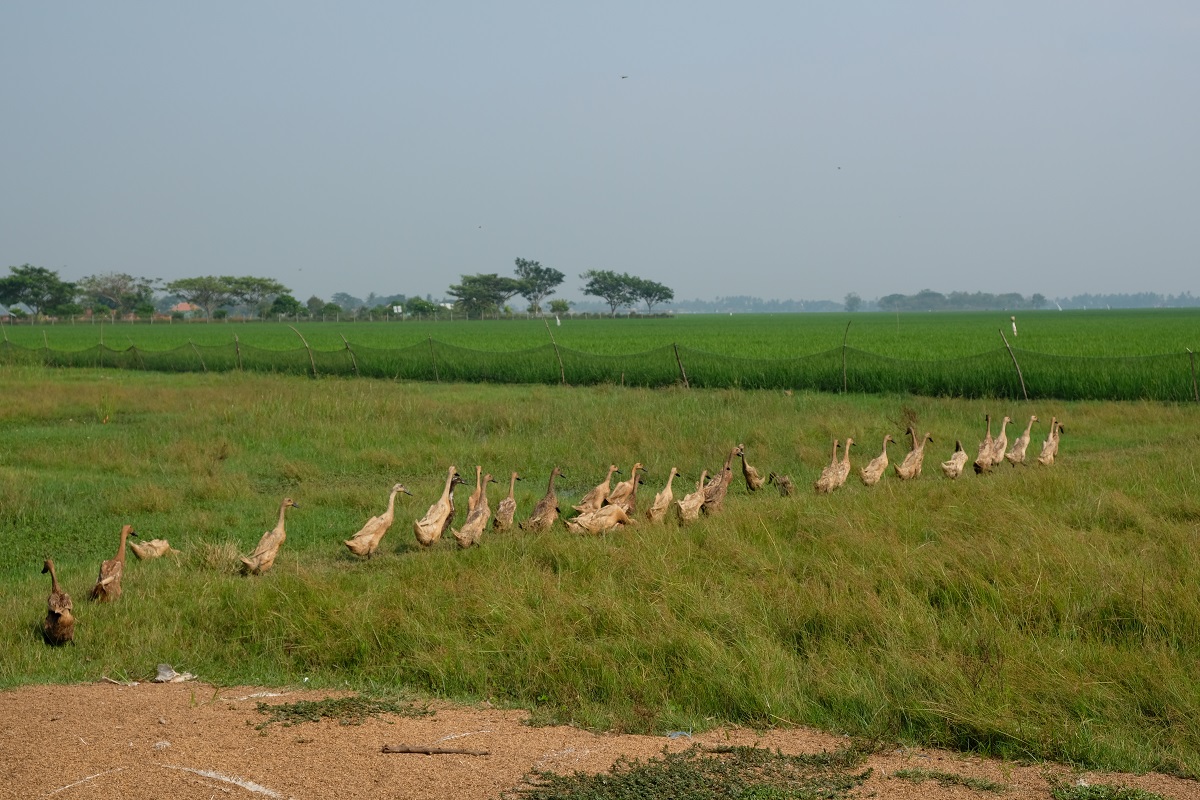 Marching to the fields 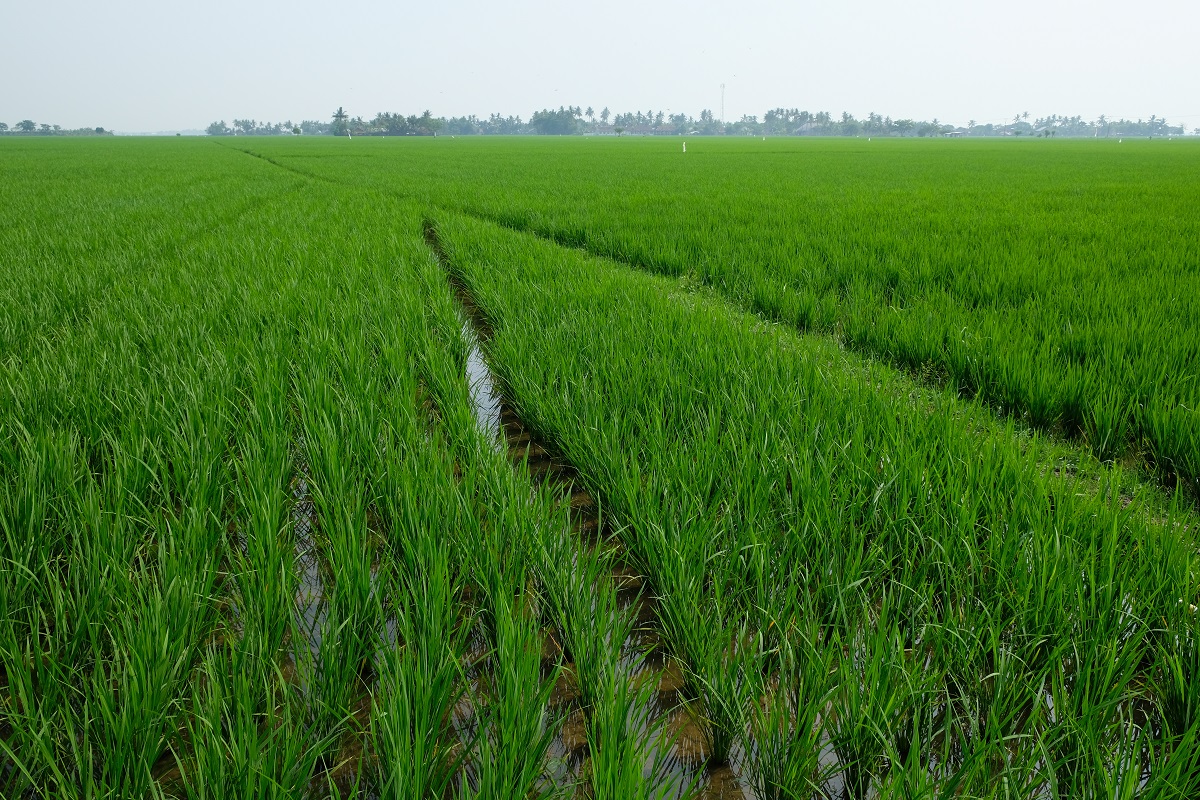 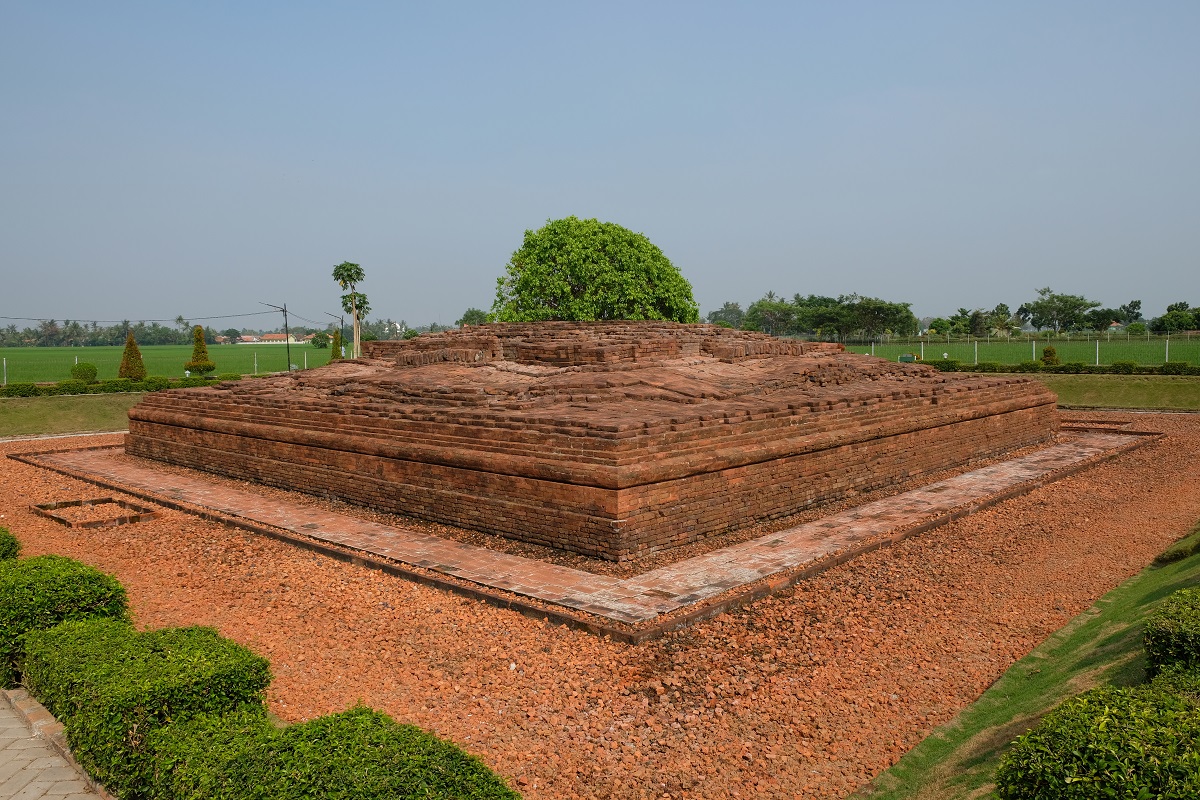 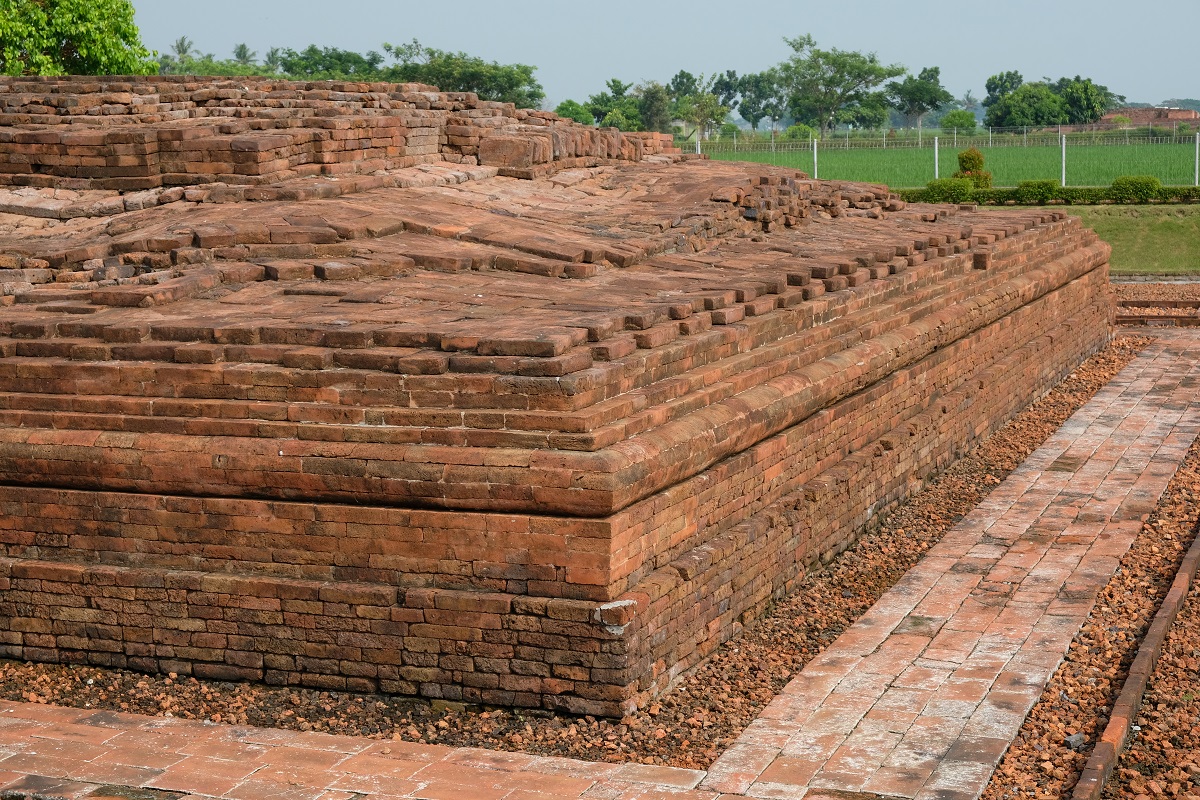 These layers of red bricks are more than 1,000 years old 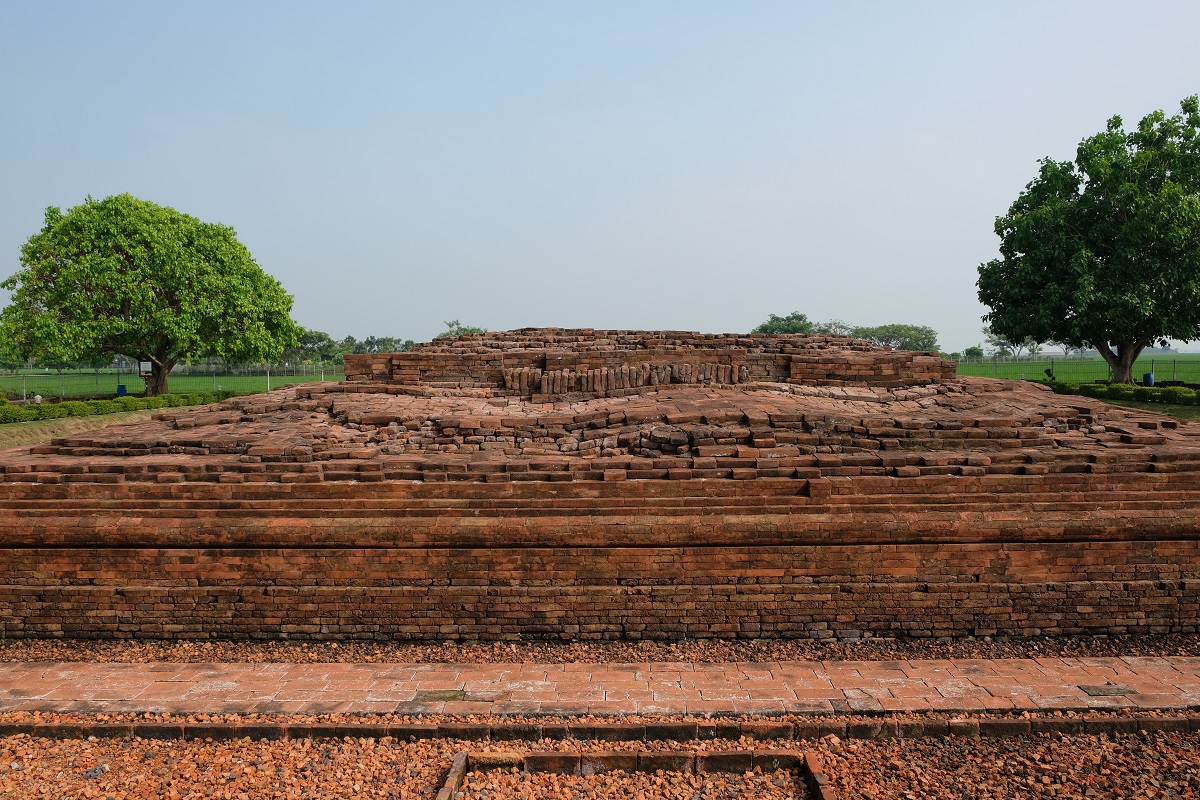 Candi Jiwa viewed from one of its four almost identical sides 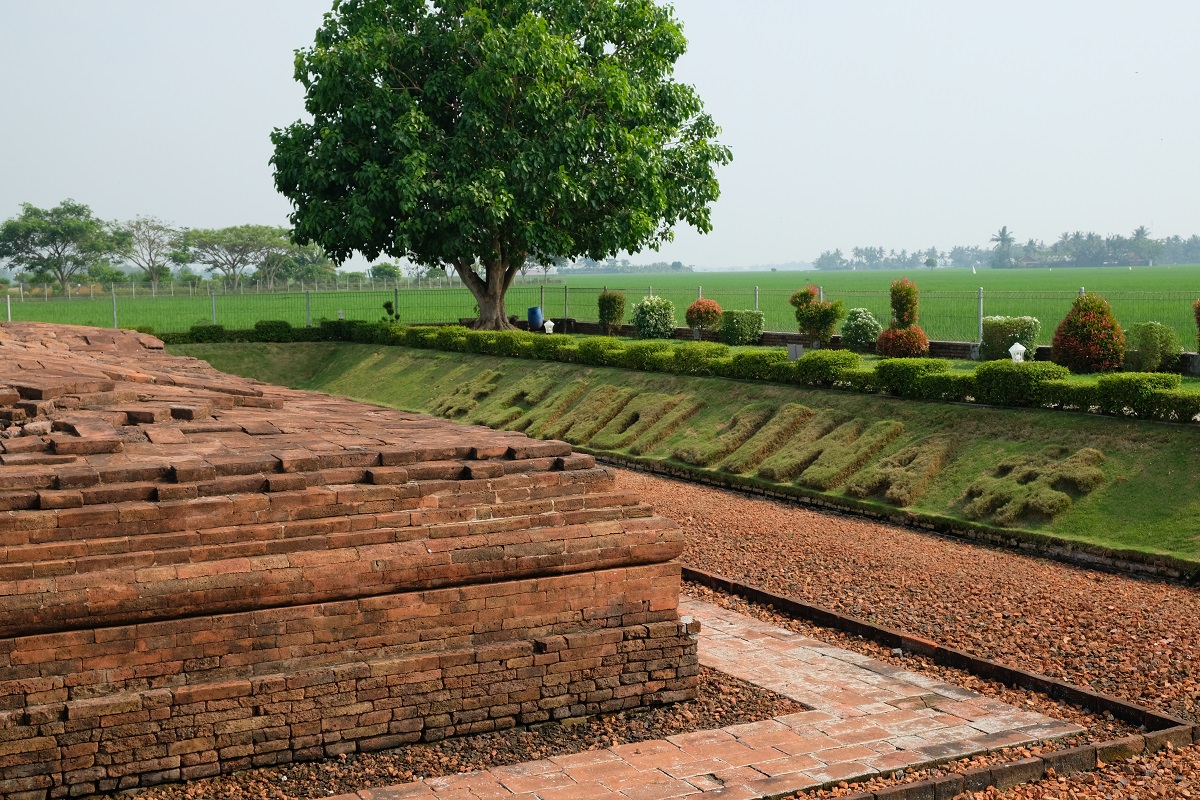 A hashtag for the ancient 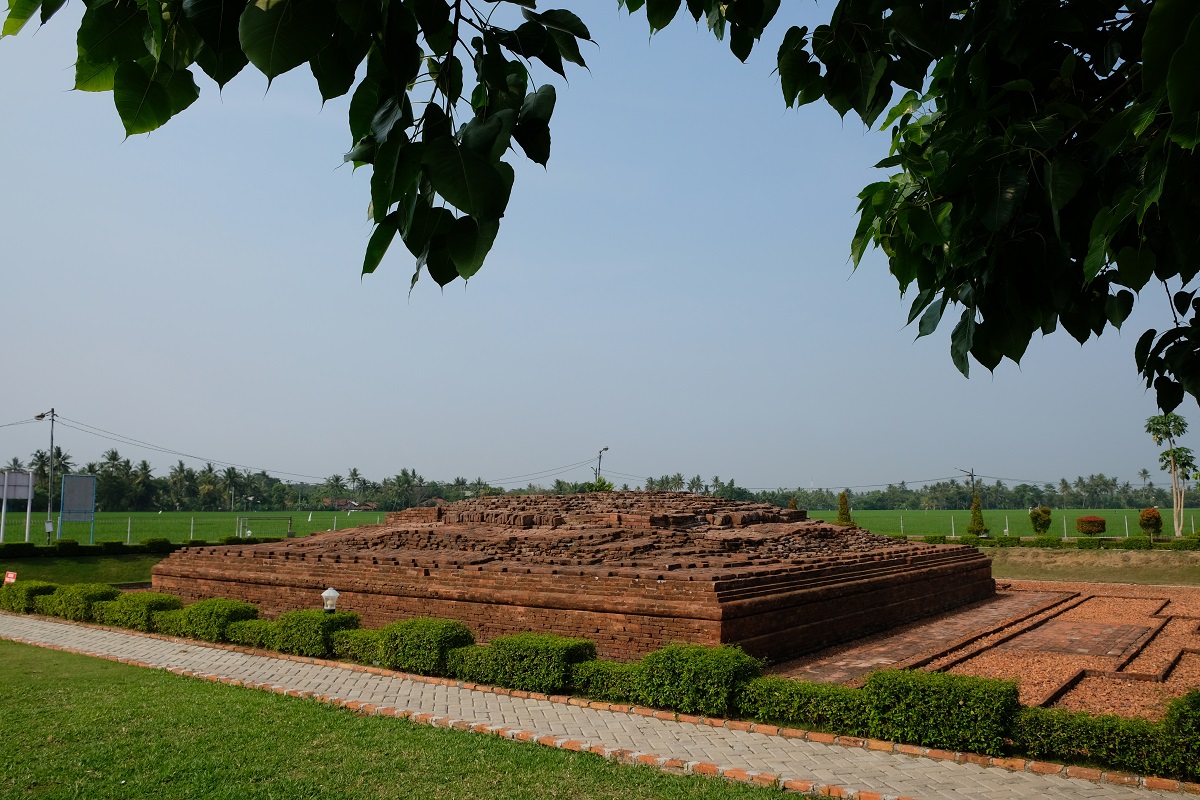 Candi Jiwa, usually the first structure modern-day visitors see in Batujaya, doesn’t give away its Buddhist origin at the first glance. Not only are statues of the Buddha absent, but so too are ornamental elements usually associated with Buddhist temples. However, upon closer inspection, its upper section when viewed from above actually resembles a lotus. At its center is a pedestal on which a stupa or a big statue of the Buddha might have rested when this site was still used as a place of worship. No stairs are found around the structure, which with a little imagination would give this shrine the appearance of a stupa or the Buddha sitting atop a floating lotus.

From Candi Jiwa, the largest structure within the Batujaya temple compound can be seen behind the trees that surround it: Candi Blandongan, which is estimated to have been constructed in two phases – first between the 6th to 7th centuries, then continued around the 8th to 10th centuries. Walking under the already scorching morning sun (it’s just past 9am) across a raised walkway that cuts through a paddy field, James and I arrive at the gate to Candi Blandongan only to find it locked. For the next few minutes, we mull the idea of trespassing since we have driven this far from Jakarta. Luckily, a staff member of BPCB (Indonesia’s Cultural Heritage Preservation Agency) arrives before any of our crazy thoughts become reality.

Candi Blandongan turns out to be larger than what I envisioned based on the photos I had seen on the Internet. With four stairs on each side leading to a central structure, Candi Blandongan has a more stately appearance than Candi Jiwa, although no one can tell for sure how the sanctum used to look. Nor can anyone explain with a high degree of certainty why there are holes in the floor of the raised platform of the temple – which can only be seen online since this part is now off-limits to visitors, probably to preserve the entire structure. Unlike most ancient temples on the island of Java which are almost always embellished with intricate reliefs and stone carvings, Candi Blandongan and Candi Jiwa, or at least in their current state, are devoid of such ornaments. Instead, the red bricks – especially at Candi Blandongan – were stacked upon each other, protruding at certain layers, in a way that makes them appear three dimensional. It’s almost modern in philosophy.

Not too far from Candi Blandongan is the last site of our temple-hopping excursion in Batujaya: Candi Serut. We could have walked to the latter if only there was a pathway from the former. However, there are only green rice paddies in front of us, and the only way to go to the other side is by taking a detour via the main village road. Hidden behind rustic houses with an ambiance that reminds me of rural Central Java, Candi Serut comes into sight after a short walk from where I park my car. This last site in fact consists of three different structures with the largest partially submerged. A walk around it will reveal an oddity: the temple is actually tilted to one side. Scholars believe this was probably the reason why the shrine was never completed. Was it caused by a miscalculation during construction? Or was it because of something else? For the moment, no one has the answer, just like the other mysteries the Batujaya temple compound has left us to ponder over. One thing is certain, however, that Candi Jiwa, Blandongan and Serut spearheaded a proliferation of Hindu/Buddhist temples on Java which at one point resulted in the construction of colossal structures the island had never seen before: Borobudur and Prambanan. All things great have a humble origin. 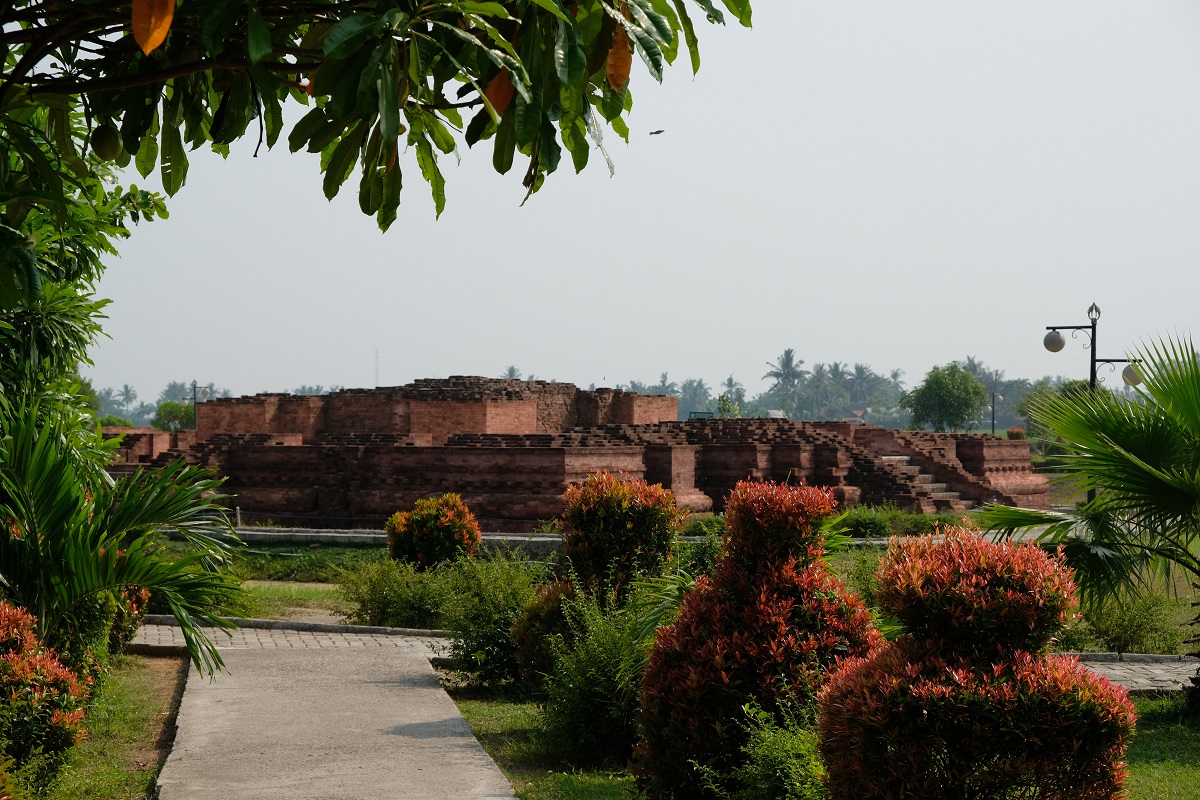 The view of Candi Blandongan from the gate 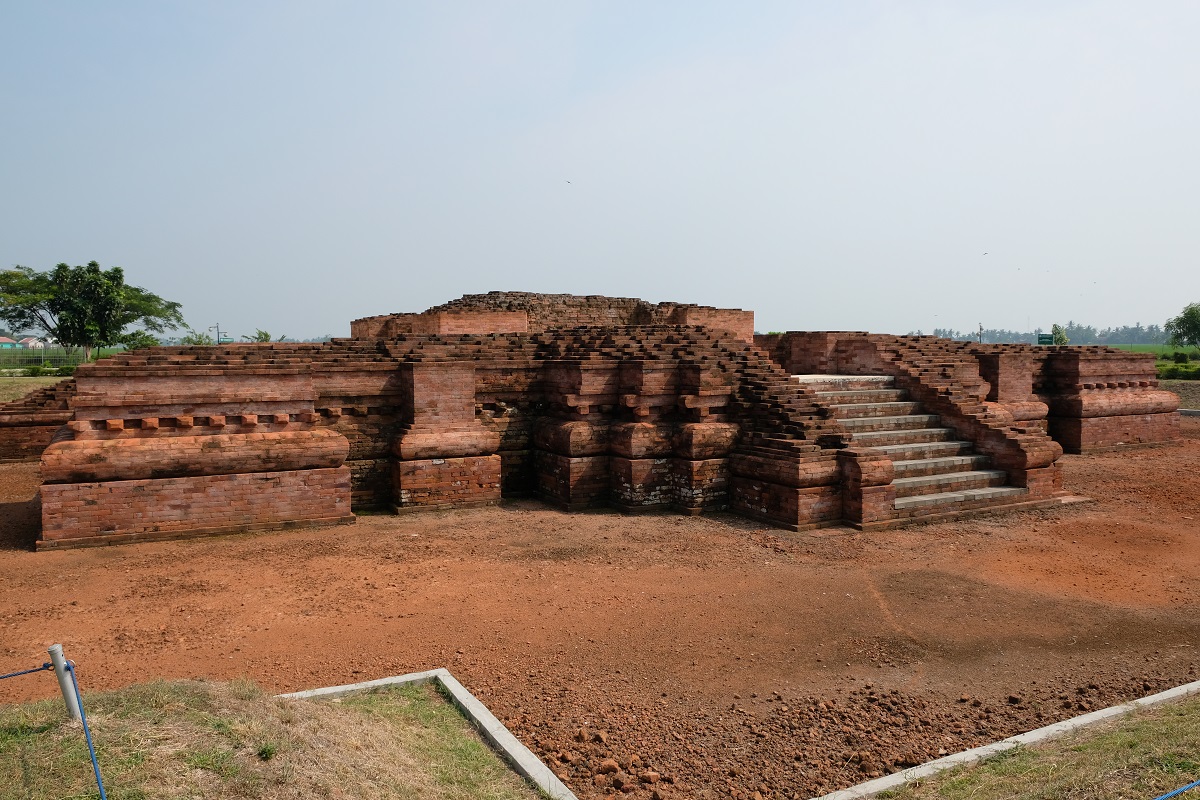 This temple is believed to have been built in two phases 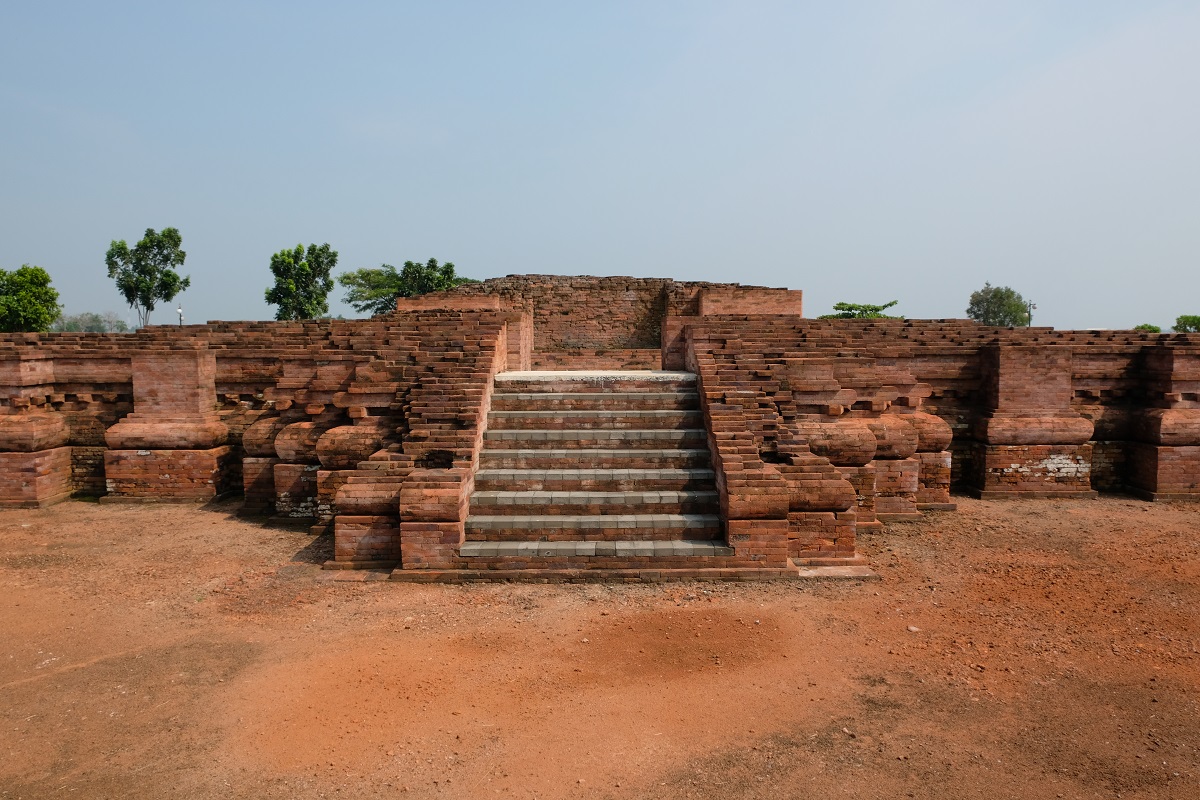 One of the stairs that lead to the sanctum 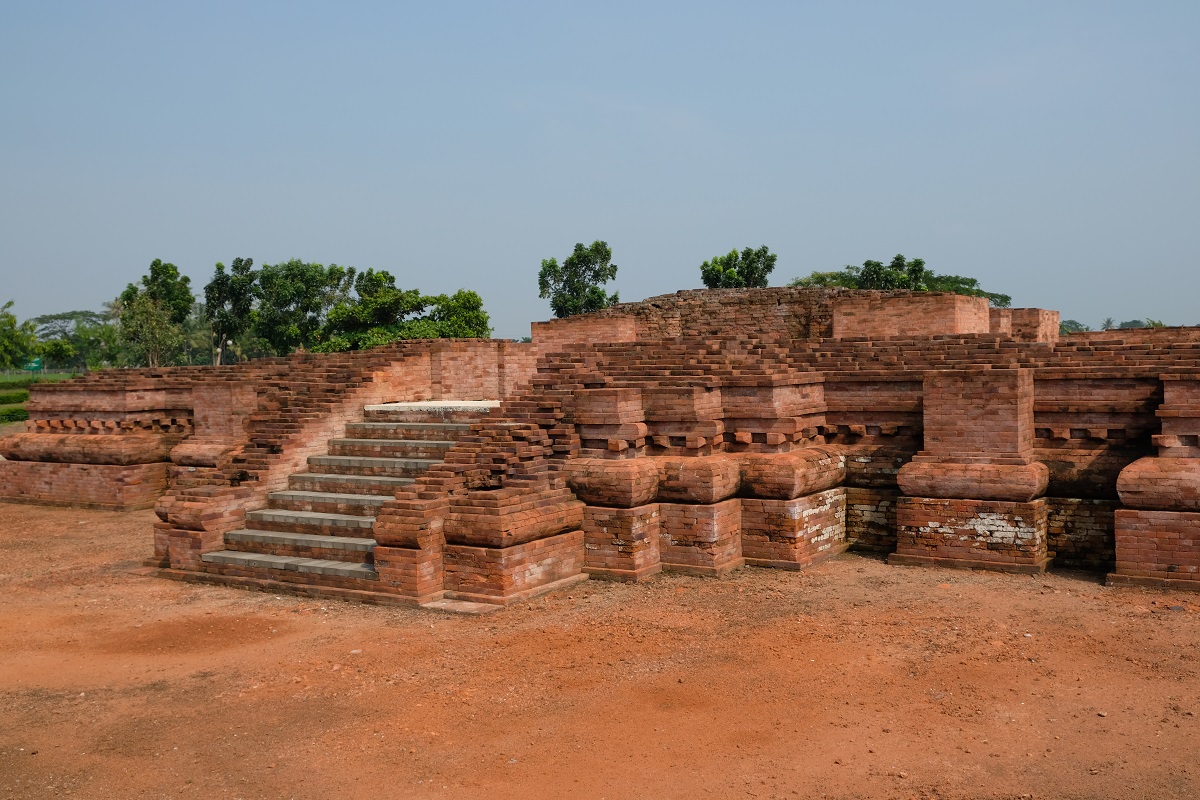 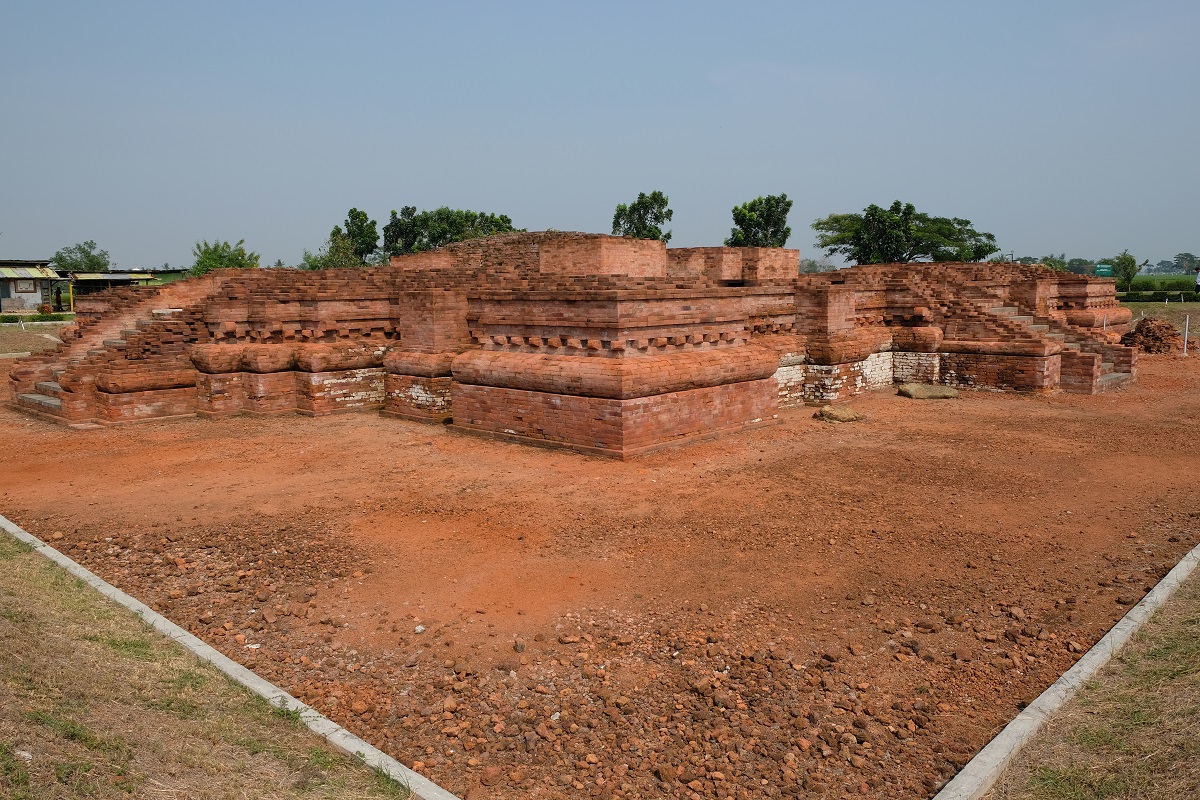 The largest ancient structure in Batujaya 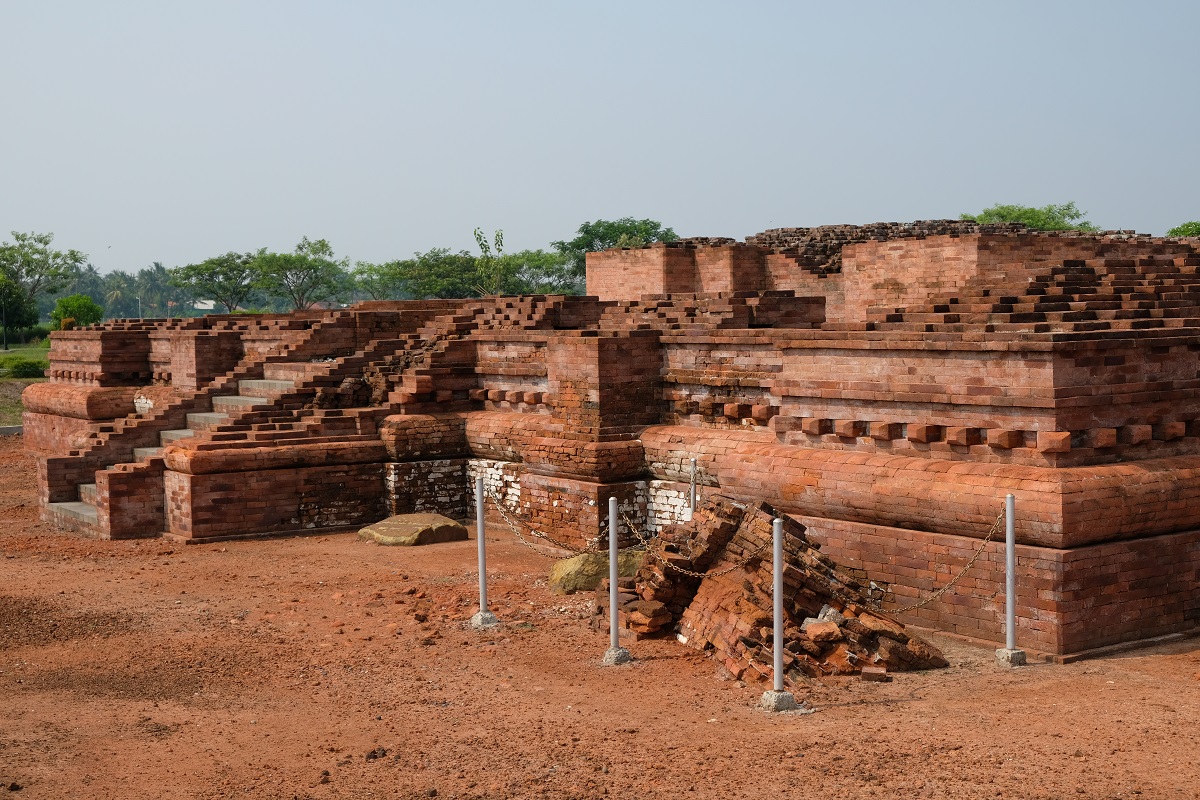 Layers of history stacked upon one another 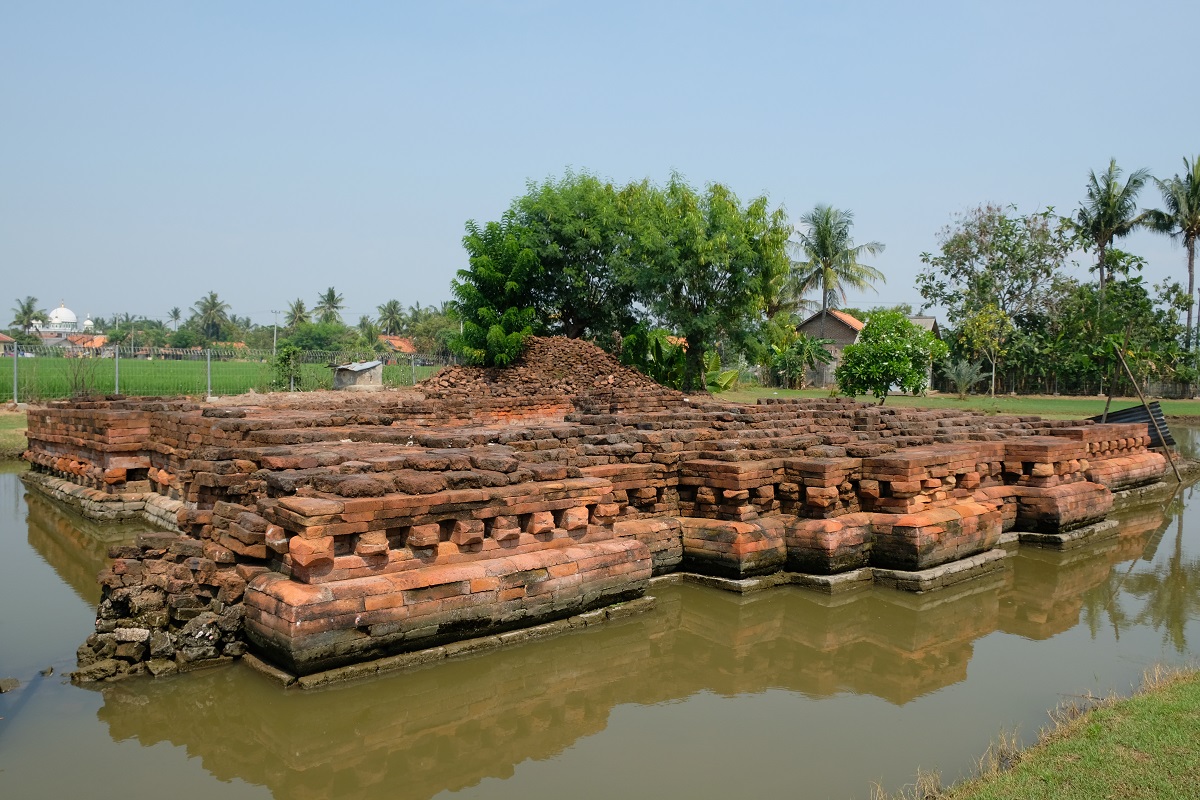 Candi Serut with its base submerged 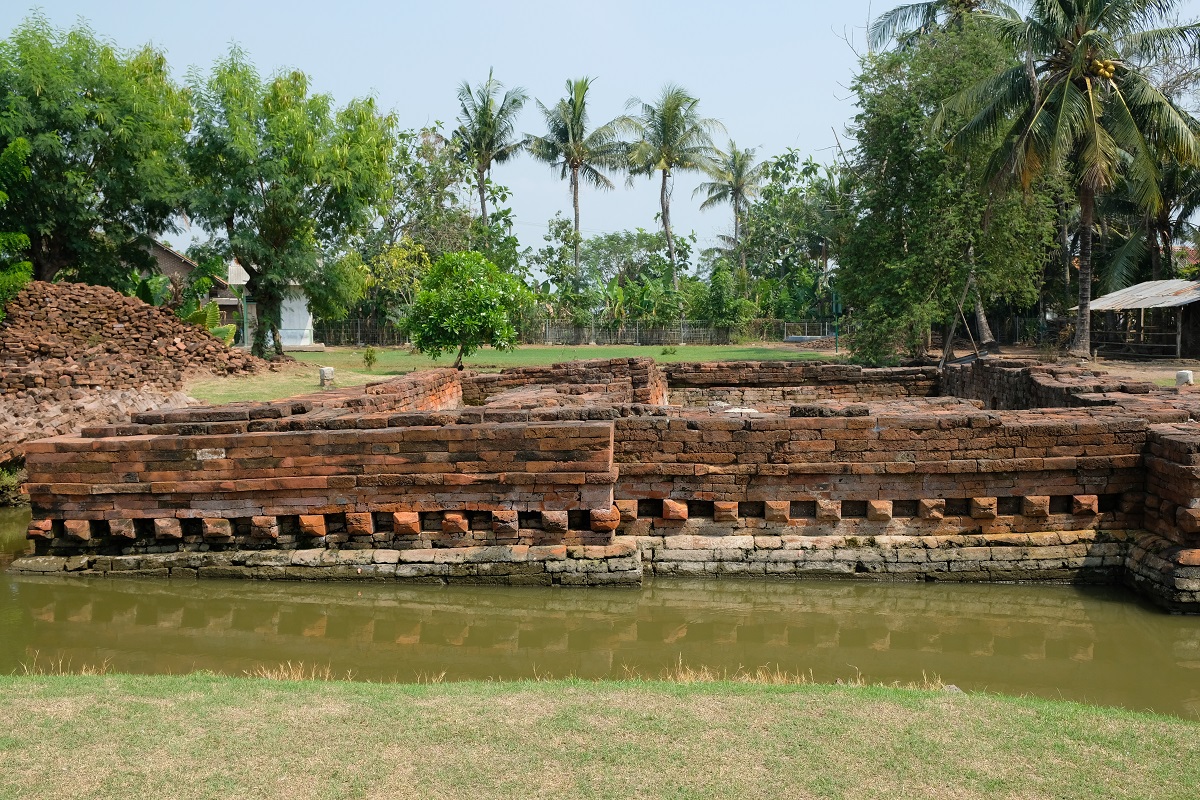 The unfinished temple remains tilted to one side 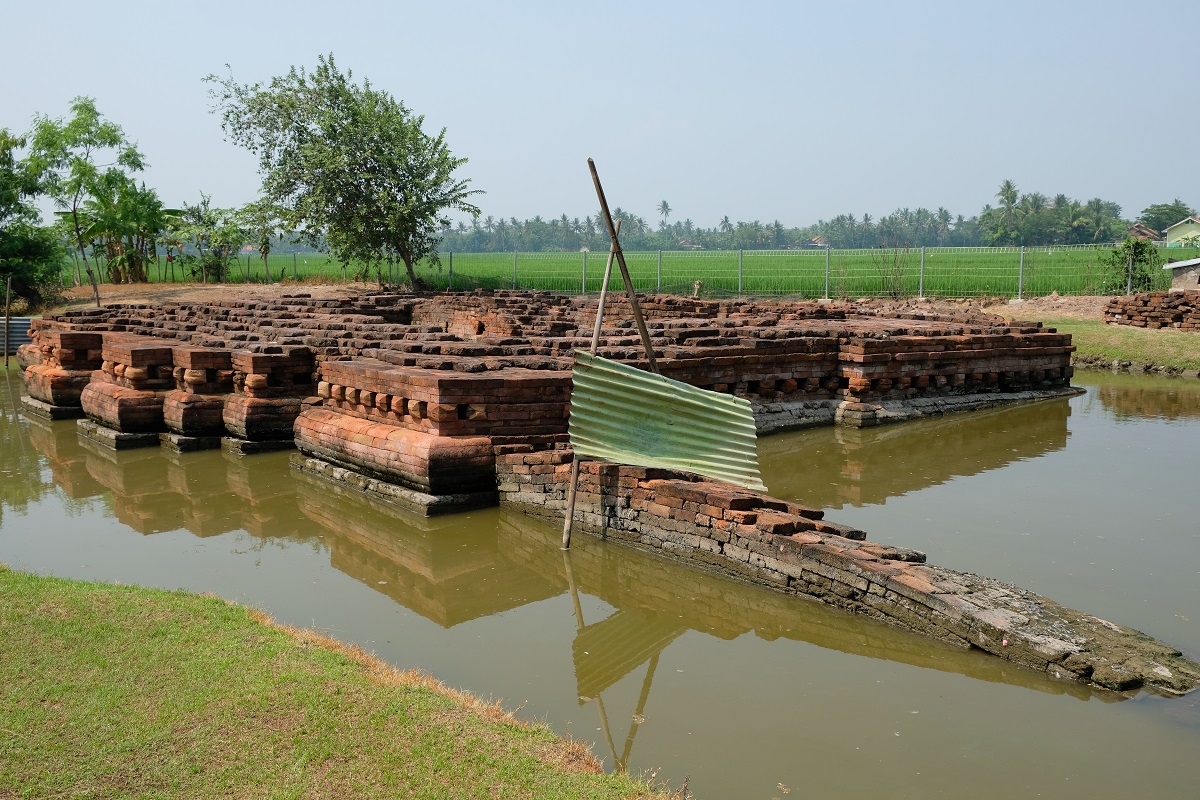 31 thoughts on “Batujaya: Dawn of an Era”