Hong Kong has always fascinated me since my first trip to the city back in January 2012, and since then I have returned five more times, with the most recent visit being in December 2019. I always tell people how Hong Kong’s hiking trails, white sand beaches, vast metro network (the MTR), tranquil small islands, skyscraper-studded skyline and cultural scene (which includes its mouth-watering dishes) are among the reasons why I keep going back. However, it was only a few weeks ago when it suddenly crossed my mind what Hong Kong actually is, and how to better describe it to those who have never set foot there.

Hybridism seems to have been and will always be (at least for the foreseeable future) in Hong Kong’s DNA. At first, this is evident in the things we can immediately see: modern high-rise buildings and traditional shops, a highly urbanized city and great outdoor escapes, ultra-efficient MTR trains and the slow but atmospheric Star Ferry. In case you didn’t notice, I don’t use the word ‘versus’ to contradict these things because they simply coexist, oftentimes complementing each other. And if we peel off the outer, superficial layer of Hong Kong, we’ll see how hybridism also occurs in much deeper and more profound aspects of people’s lives.

Despite its well-connectedness to many parts of the world, its society is still largely bound by traditional values. And although capitalism is very much the foundation of Hong Kong’s modern economy, subversive ideas have been very much tolerated, until recently when this territory was forced to adapt to a new form of hybridism: one that combines a supposed respect for civil liberties with a more authoritarian style of governing the people. Recent trends show how Hong Kong has been leaning more and more toward the latter which eventually will make it like other cities in mainland China.

In my latest visit to Hong Kong, Pok Fu Lam and Sai Ying Pun in the western part of Hong Kong Island were among the places I explored in the territory. I have to admit, having James navigate through the city to find our way to the places we wanted to see has helped me to enjoy Hong Kong immensely more than I would have if I was traveling by myself. While both areas were rather unassuming – by Hong Kong standards – it was only recently that I realized that together they are a good example of hybridism in this city. In Pok Fu Lam, we went to the Hong Kong campus of the University of Chicago which occupies a low-rise glass building with smooth curves that give it an unmistakably modern look. Below this façade, however, are remnants of Jubilee Battery which formed Hong Kong’s eastern coastal defense system when it was still a British colony. Old and new, past and future.

The ruins of Jubilee Battery directly underneath the campus 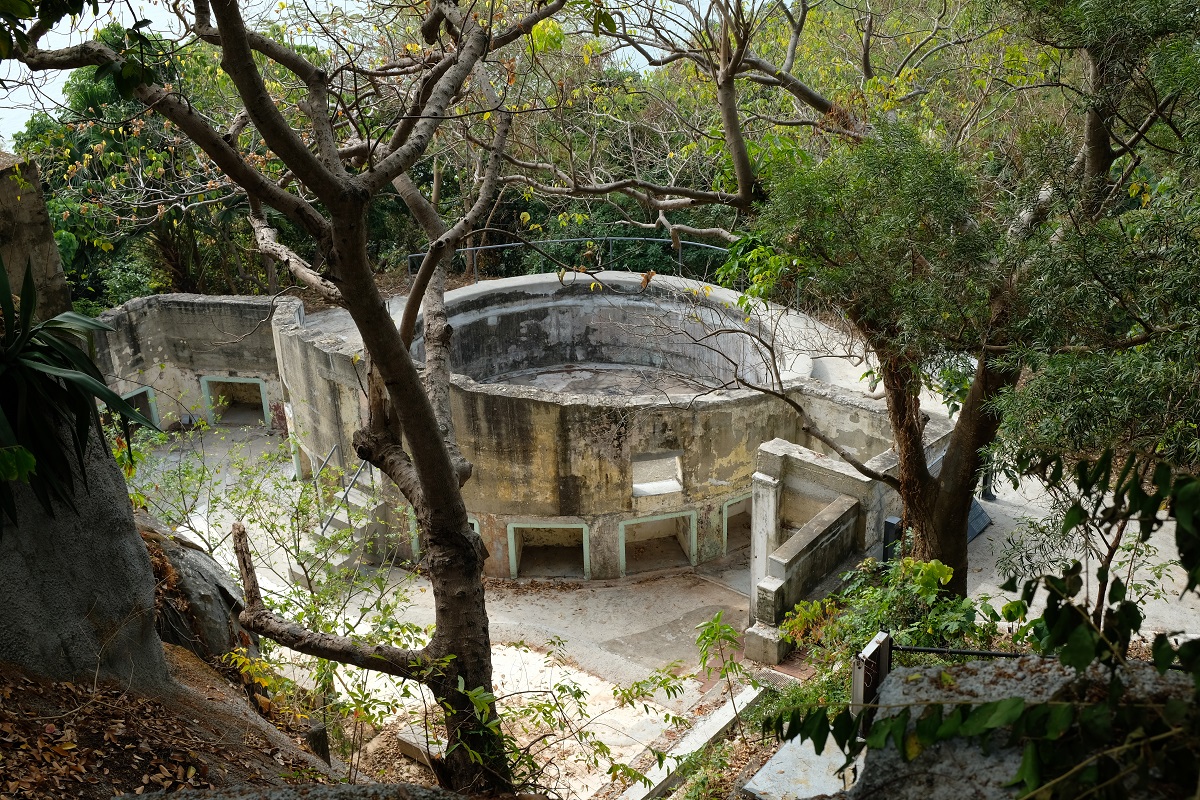 From memories of the past rises the promise of the future 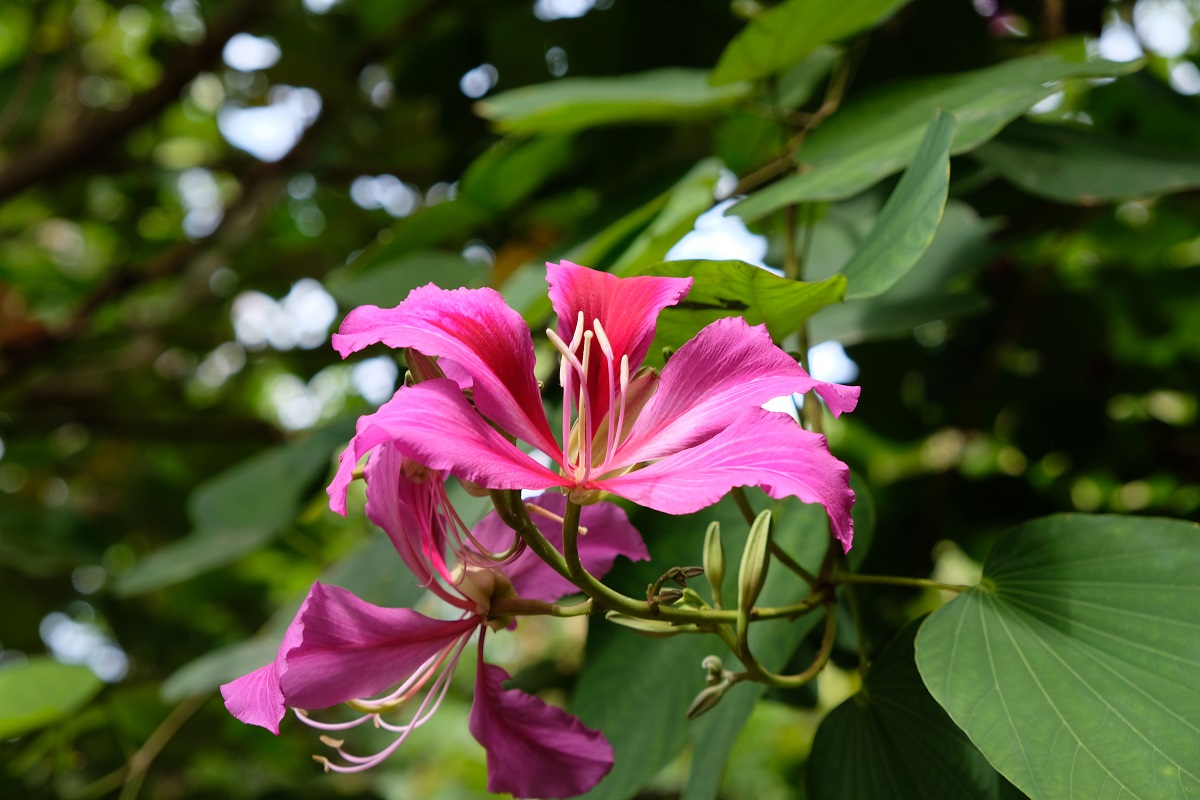 The flower that is depicted on the flag of Hong Kong

String hoppers at Serendib, a Sri Lankan restaurant in Sheung Wan, the neighborhood next door to Sai Ying Pun

Sri Lankan beef curry, which was very spicy even for an Indonesian like me 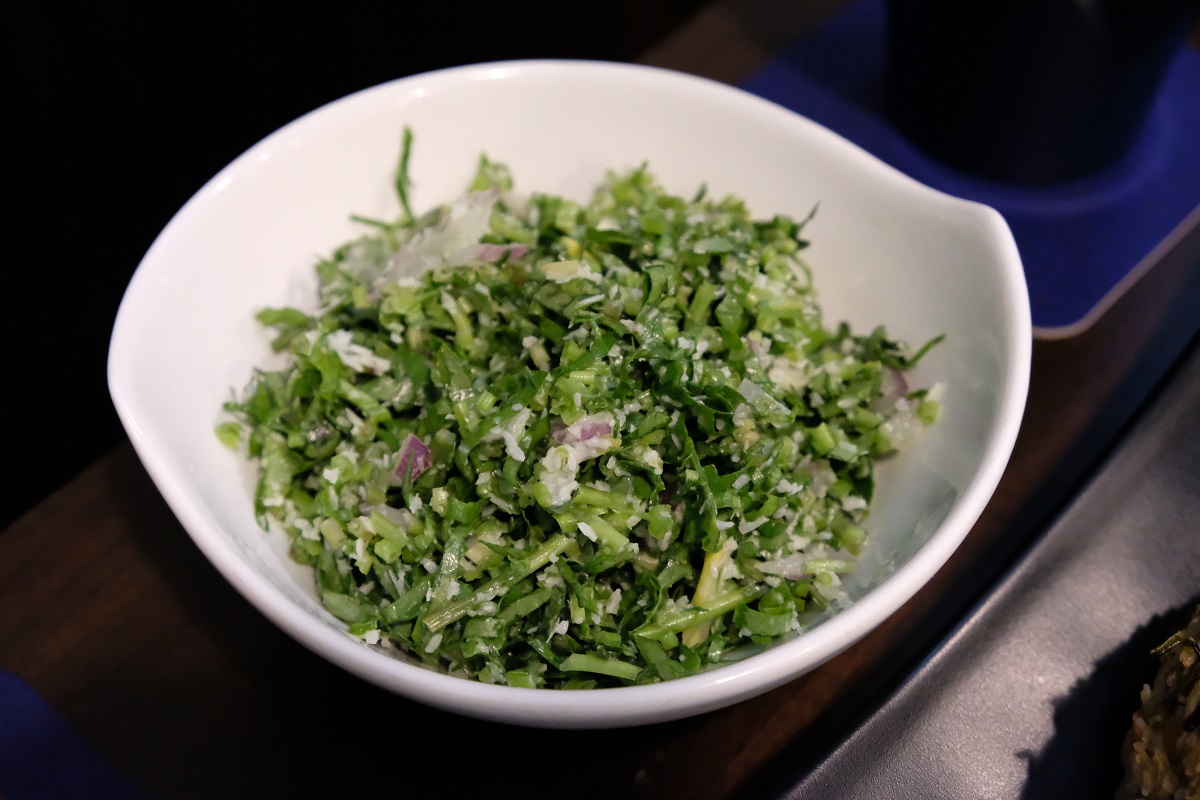 Gotukola sambol, a Sri Lankan-style salad made from pennywort, coconut, shallots and other ingredients

Not for the faint of heart 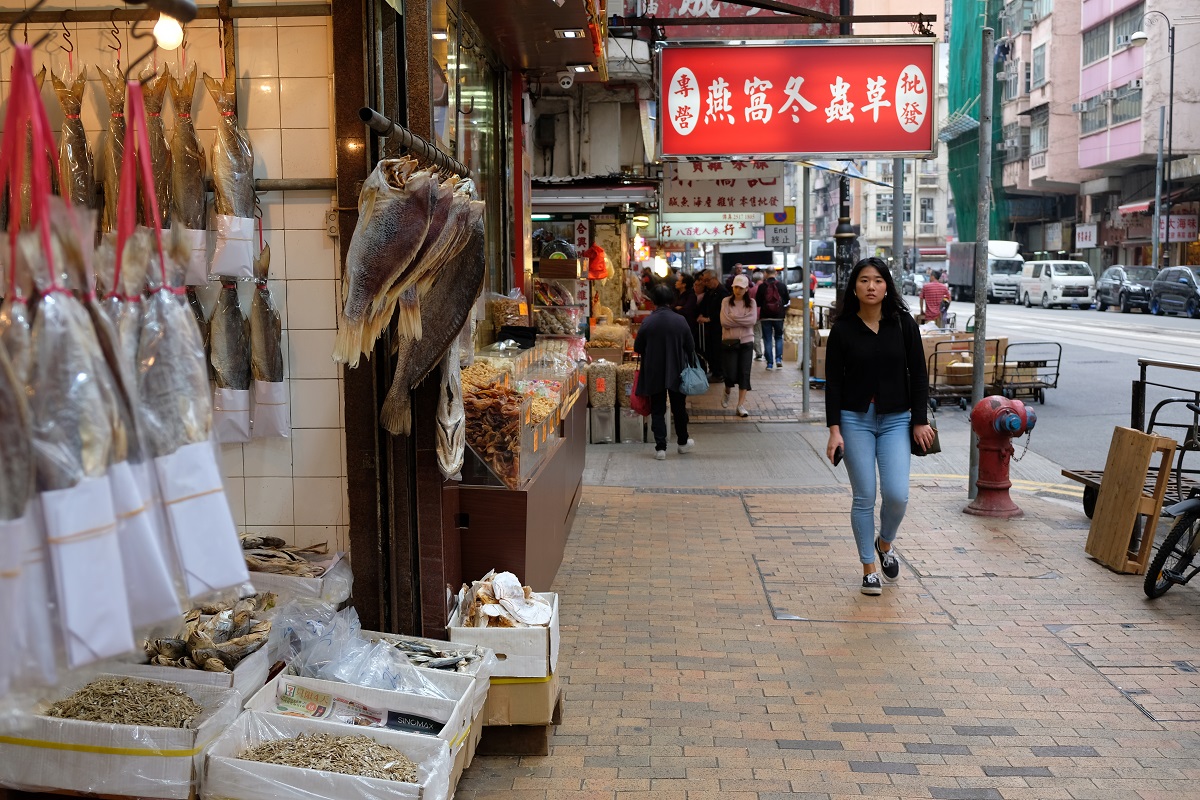 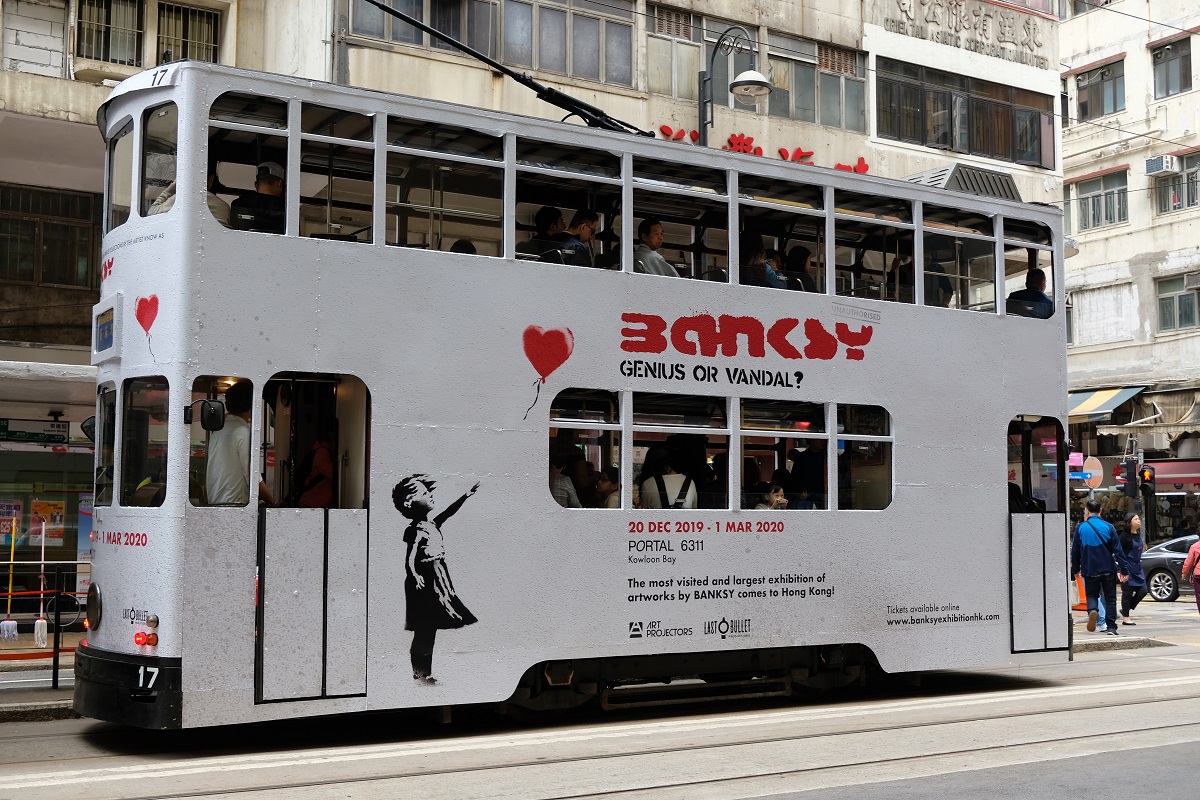 …to an artist whose works revolve around political and social issues

On Yu Lok Lane, four two-story structures stood out amid their vertical neighbors. A handsomely restored collection of former Chinese tenement buildings from the early 20th century, this is among the many projects carried out by Hong Kong’s Urban Renewal Authority (URA) whose mission is to address urban decay and improve the living conditions of residents in the city’s old districts. James himself took part in this particular project as an intern during one summer break when he was still an architecture student. “I made the computer model of these buildings using AutoCAD,” he recalled while making a reference to the software application which I also learned briefly in my university years.

While those examples based on my observation are part of the reasons why Hong Kong is such an intriguing and endlessly charming place to explore, a new kind of hybridism has been emerging in recent years as I mentioned earlier. Almost everything you read or hear on the news about this city lately points out to the fact that Beijing-style authoritarianism has been creeping into the lives of Hong Kong residents. My visit at the end of last year happened only a few weeks after the months-long protests that rocked this territory had started to die down. But in many places across the city, expressions of people’s (especially the youth) frustration toward their government were still visible. A sign for disabled people to access the MTR that I saw not far from the University of Hong Kong’s campus was doodled with a depiction of police brutality toward a masked protester. It’s one of many reminders of the duality of residents’ feelings regarding what has been happening to their hometown: hope and despair.

In retrospect, when the bauhinia flower was chosen to adorn the new flag of Hong Kong upon its handover to China from the United Kingdom, it was at the same time very much symbolic of what the territory would become – although the flower had in fact been used as the emblem of the city’s municipal council when it was still a British colony. The purple-colored bauhinia blooms, which were first discovered in Pok Fu Lam in the late 19th century, can be found throughout Hong Kong, especially during the winter. Its blossoms emanate a subtle sweet fragrance (as I learned myself upon sniffing on them underneath UChicago’s campus) which can be detected only when you put your nose very close to them. However, this bauhinia plant is actually a hybrid – probably a naturally-occurring one – whose scientific name is Bauhinia x blakeana, after Henry Blake, British governor of Hong Kong from 1898 to 1903. Choosing a hybrid plant as the emblem of a territory? It certainly suggests a profound philosophical question about Hong Kong’s place in China in the future.

Ideally, a hybrid carries the best of both worlds of its parentage. But when a hybrid is forcefully exposed and consistently fed with the genes of just one side of the parent, will it eventually become a species that is no different from that parent? Only time will tell. 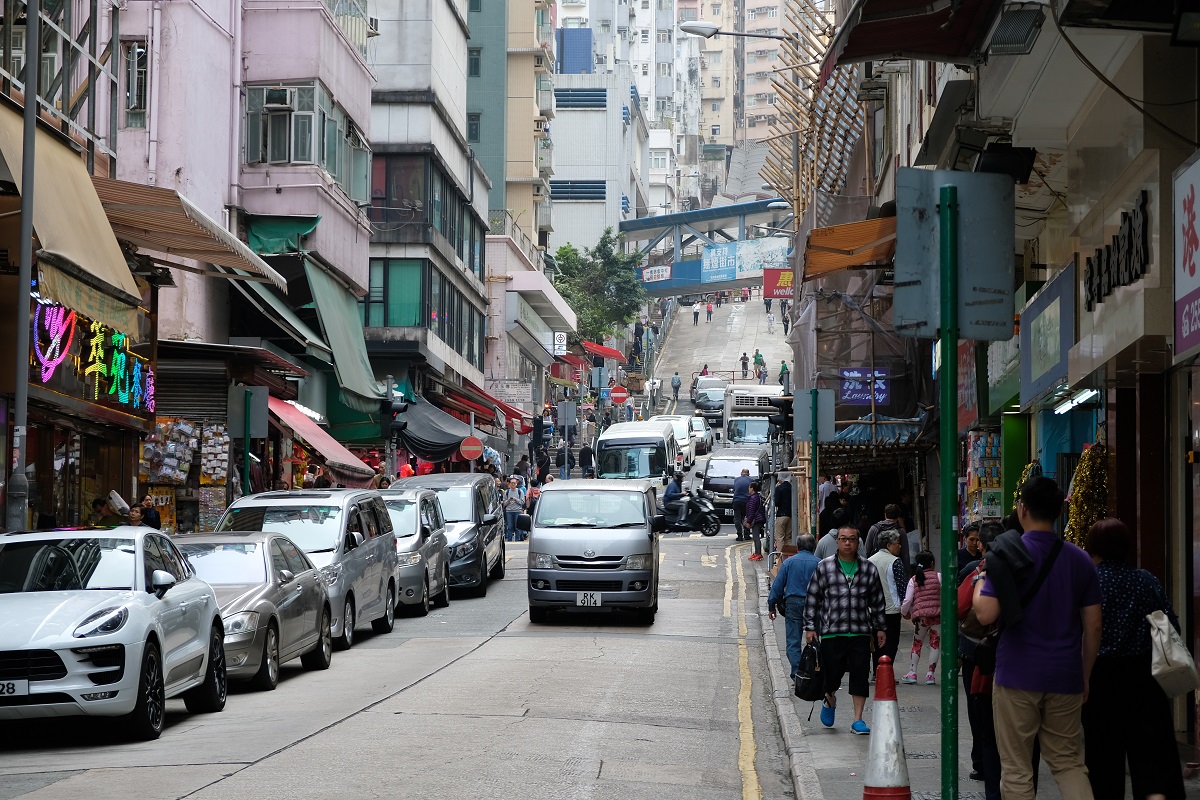 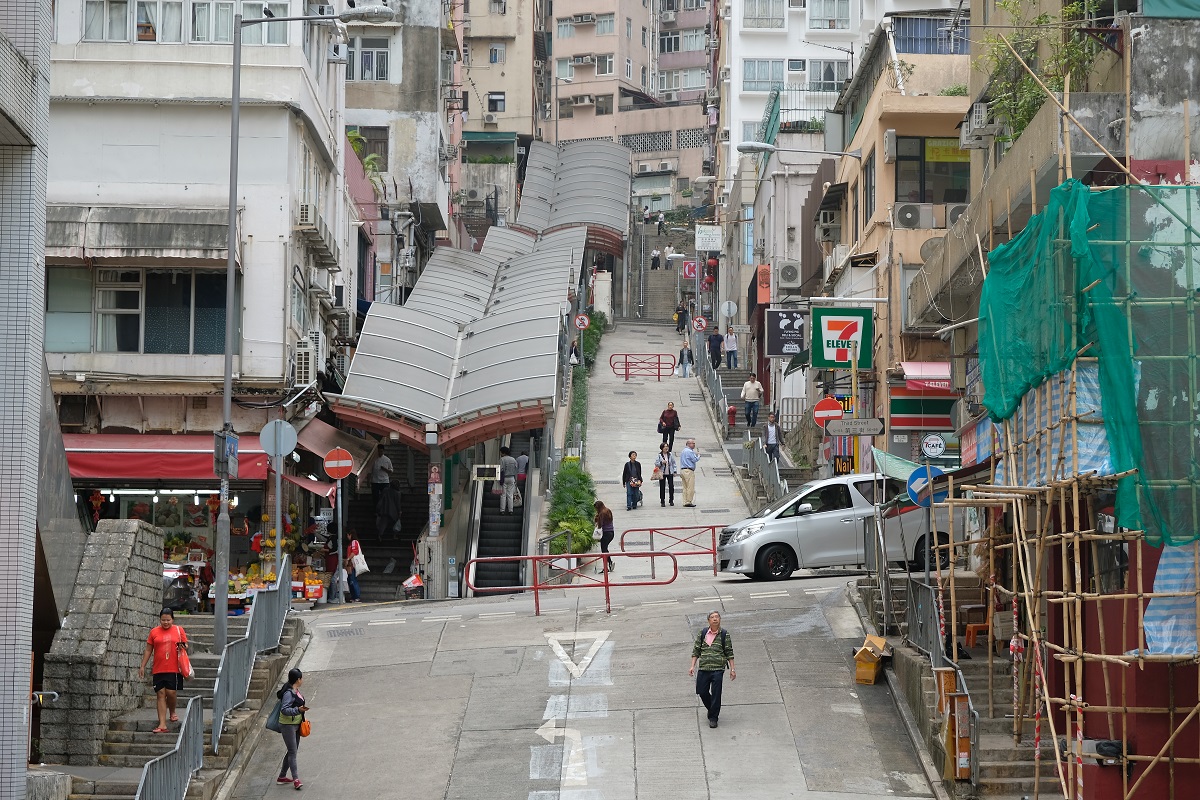 The vegetable section of the market 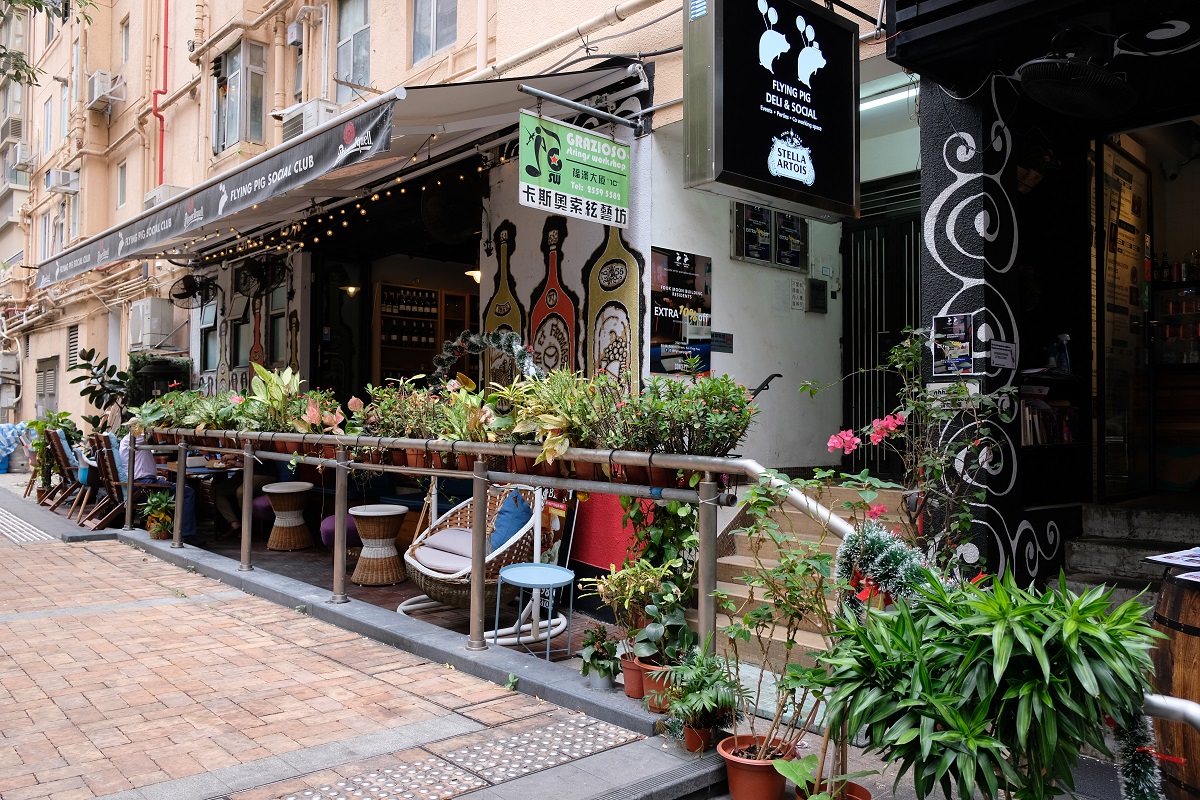 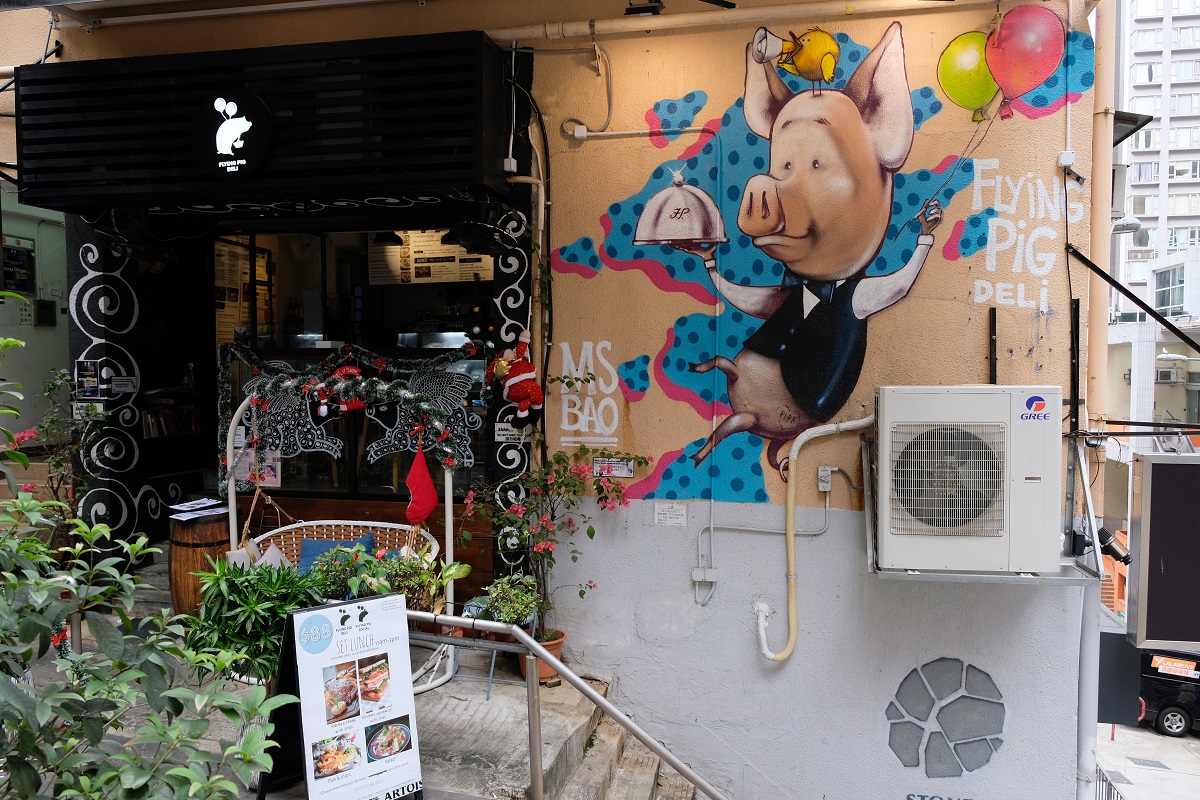 A cute mural of a restaurant on Yu Lok Lane 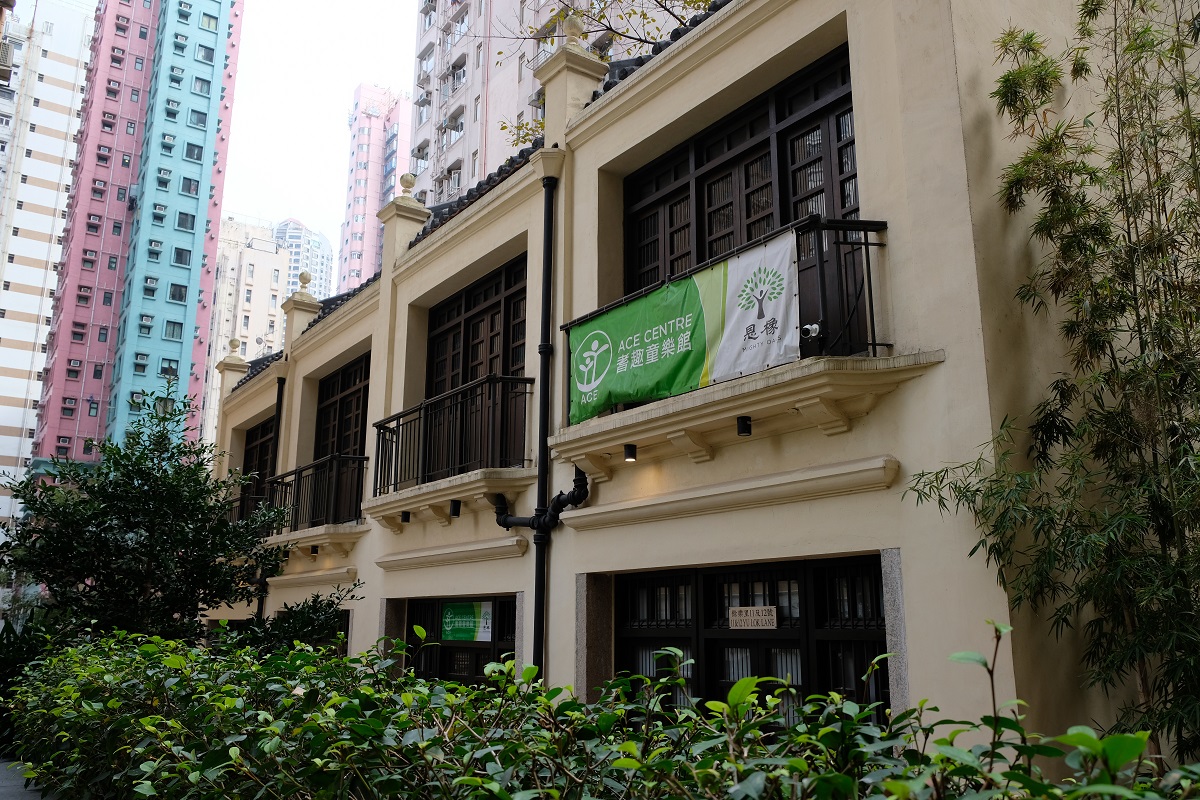 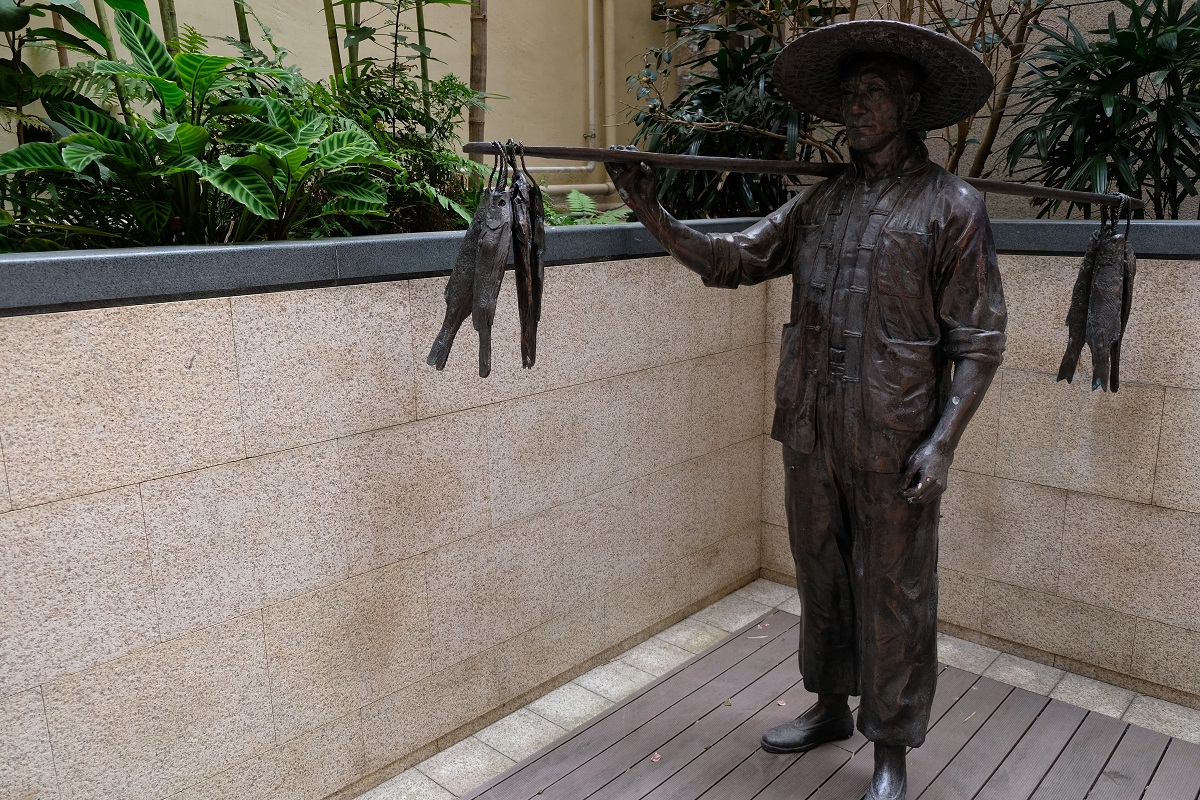 A reminder of Hong Kong’s past as a fishing village 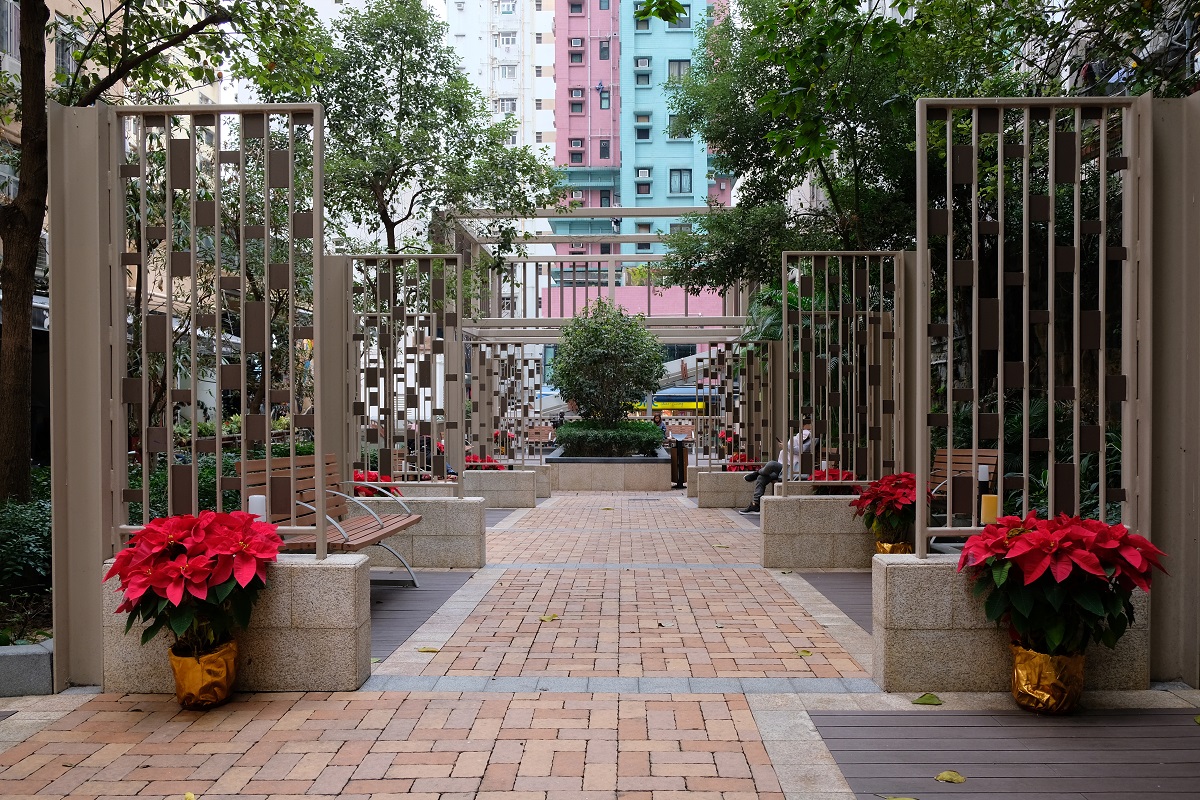 35 Bonham Road, an apartment from the British colonial era 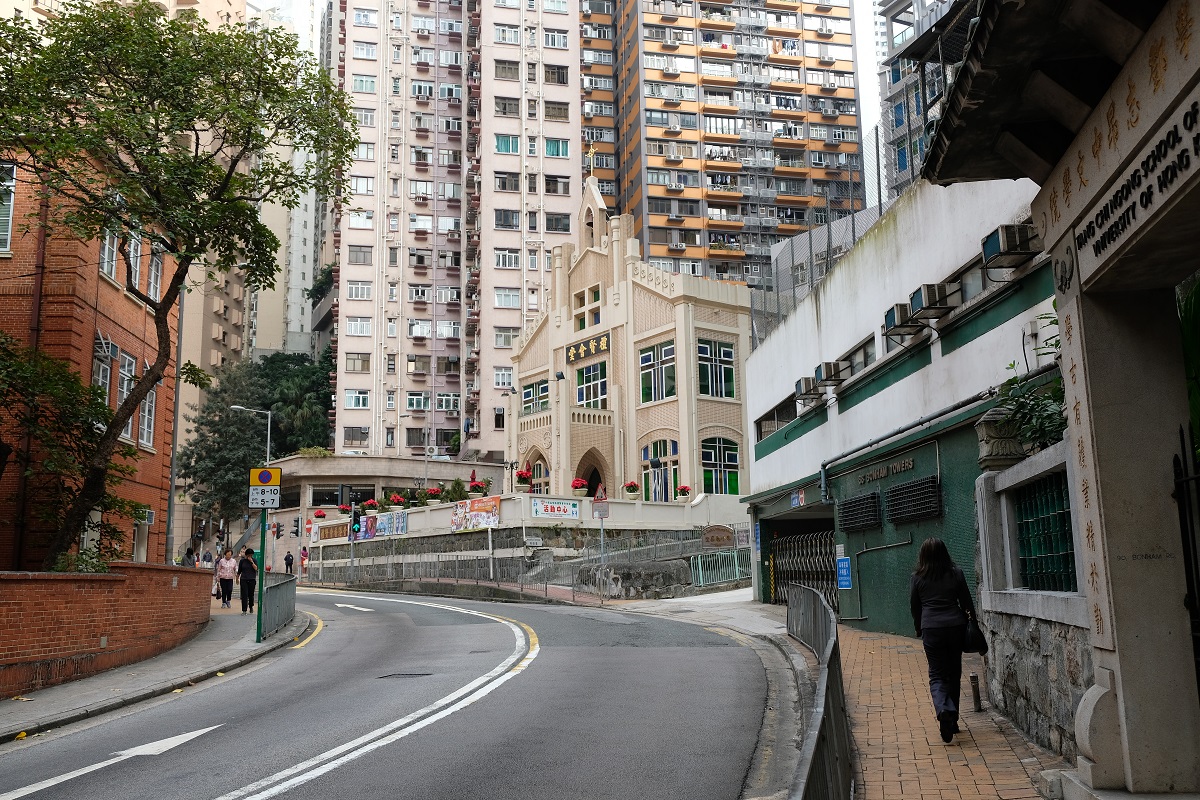 A Rhenish church on Bonham Road 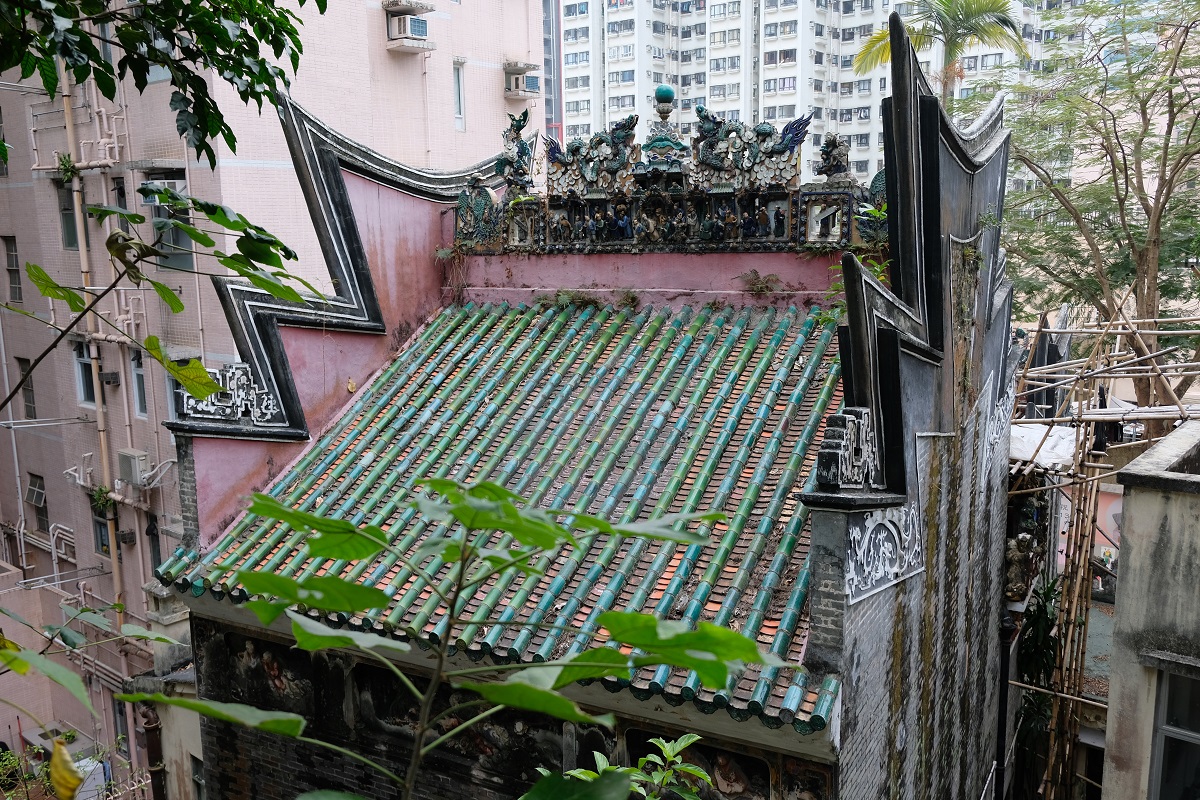 Where the temple is located

47 thoughts on “A Look at Hong Kong’s Hybridism”