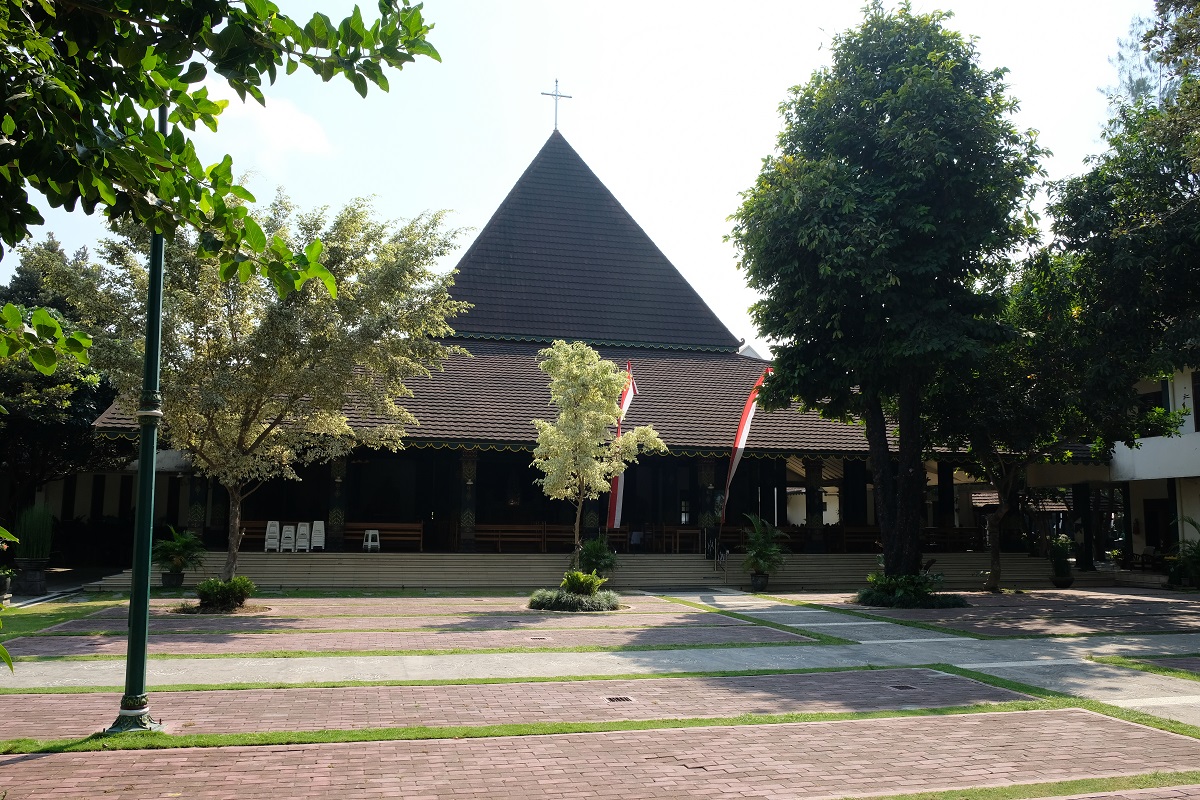 The main structure of Ganjuran Church

The hamlet of Bambanglipuro is an archetypal village in the heartland of Java; rows of traditional houses and small mosques interspersed with patches of paddy fields line both sides of the country road we take from the city of Yogyakarta, or Jogja for short. Our driver, a man of about the same age as James and I, hails from the city of Kediri in East Java but has been living in Jogja for quite some time. On this particular drive, he must navigate with the help of Google Maps. “I have never been to this church before, but I think I know where it is,” he tells us in an assuring tone.

Ganjuran Church, named after the area where it was built, is a Roman Catholic church which was constructed in 1924 by Dutch brothers Joseph and Julius Schmutzer. Co-owners of one of many sugar factories in Java, the siblings commissioned the church, lots of schools, and a clinic serving the local community – many of its members worked at the factory. So why are we going all the way there, some 20 km away from the city center, just to see a church in a small village?

James and I walk through a gate made from andesite, a type of volcanic rock that was the preferred building material to construct a myriad of Hindu and Buddhist temples in Java more than a thousand years ago. However, instead of the usual depiction of Kala (the menacing face of a giant to ward off evil spirits), we see a dove and a figure on top of it, presumably God the Father, wearing a Javanese headdress. What an intriguing first impression!

There are dozens of pilgrims and worshipers here, but the ambiance is palpably peaceful with the occasional gentle breeze of fresh air caressing our faces. We hear solemn harmonious voices faintly emanating from inside the church’s main structure, unmistakably Javanese in architectural style with the distinctive peaked roofs. We walk closer to where the sound comes from, and find an airy nave underneath among some of the most ornately-decorated ceilings I’ve ever seen. A small group of young men and women appear to be practicing a few songs, maybe for the day’s service or an upcoming important event. Everyone sings in tune, in different keys, creating layers of depth that result in auditory beauty.

Placed against the back wall, and facing the singers, is a sculpture that got my attention earlier this year. From a distance its dim sheen makes it look as though it was carved from ivory, but it’s the outline that makes it familiar to my eyes, which were astonished by an image of Jesus wearing a Javanese headdress and donning traditional costume on my Instagram feed months ago. I walk closer to it while James records chapter after chapter of the choir’s rehearsals on his camera and phone. The sign below the statue reads Sang Maha Prabu Jesus Kristus, or Jesus Christ Lord of Lords in Javanese with loanwords from Sanskrit, followed by Pangeraning Para Bangsa, King of All Nations. Meanwhile on my right hand side, across the altar, lies an equally fascinating depiction of another central figure in Catholicism: Mother Mary. She also wears Javanese traditional dress and sits atop a pedestal with floral patterns around its base, reminiscent of how a goddess was often portrayed back in the day when Java was still predominantly Hindu.

The Javanese are known for their ability to adopt new cultures without abandoning the old ones. Rather, what often happens is the assimilation of the old and the new while the culture itself remains intrinsically Javanese. From the seventh-century Hindu temples of the Dieng Plateau, to the colossal Mahayana Buddhist Borobudur temple from the ninth century, the eclectic 16th-century mosque in Kudus, and Ganjuran Church, in spite of the different gods or deities these places of worship were dedicated to, they share one thing in common: all of them have incorporated elements of Javanese traditions, as well as aspects of the newly-dominant culture and the one it replaced.

A short walk from the church’s main congregation hall is a structure that resembles an ancient Javanese Hindu temple. However, instead of housing a lingga and a yoni (both symbolizing Shiva, one of the Trimurti – the triple deity of supreme divinity in Hinduism), inside is Jesus, also dressed in Javanese costume. Pilgrims sit either on plastic chairs or on the floor in front of the ‘temple’ in complete silence, while a few others sit cross-legged on a raised platform before the stairs that lead up to the entrance to the temple’s sanctum.

Along the walls surrounding this inner section of the church compound are reliefs depicting the Stations of the Cross, telling the story of Jesus’s final hours on the day of crucifixion. Unsurprisingly, each and every character is depicted wearing local dress with apparent influences from Hinduism. This is another fine example of the plasticity of Javanese culture which can be molded into different shapes without losing its characteristics.

So why did we come? A Christian place of worship in a predominantly-Muslim area, where Jesus and Mary are depicted donning Javanese dress, and whose main hall takes the form of a pendopo (a Javanese pavilion-like structure) with a small ‘temple’ next door is certainly not your typical church. 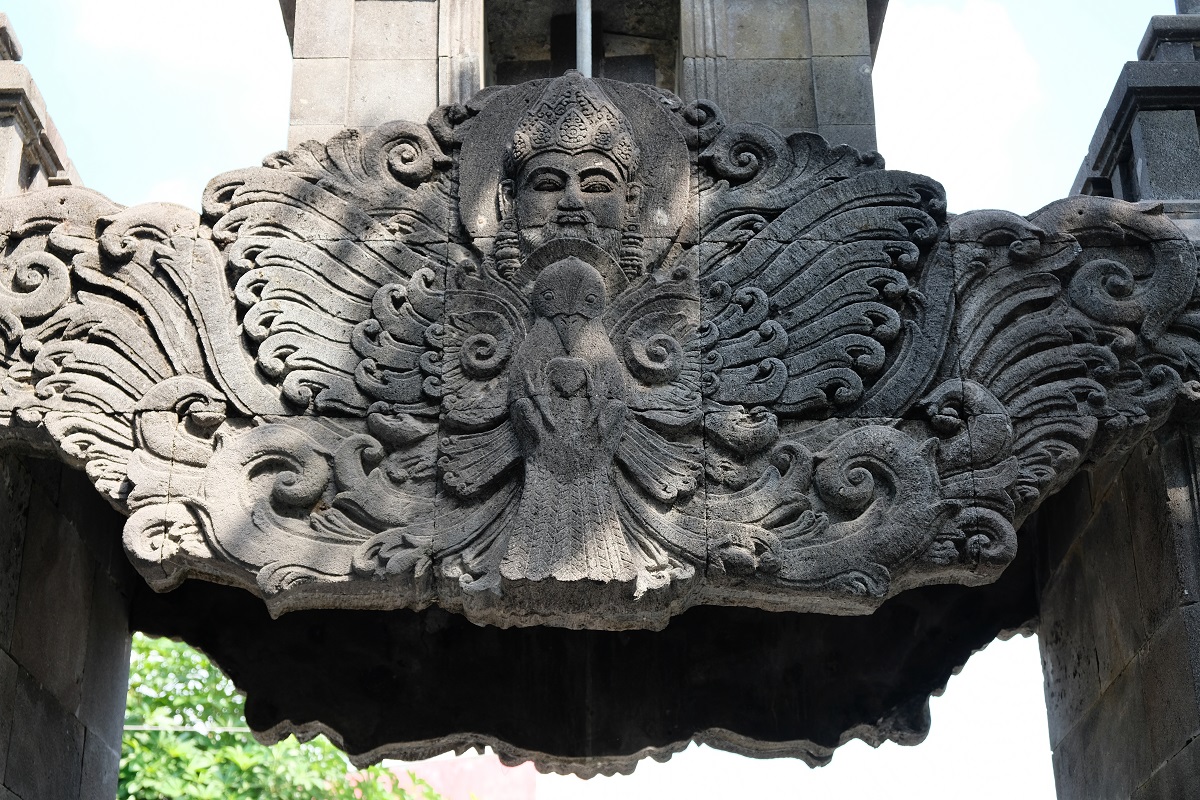 Welcome to the abode of peace

A fine example of Javanese architecture 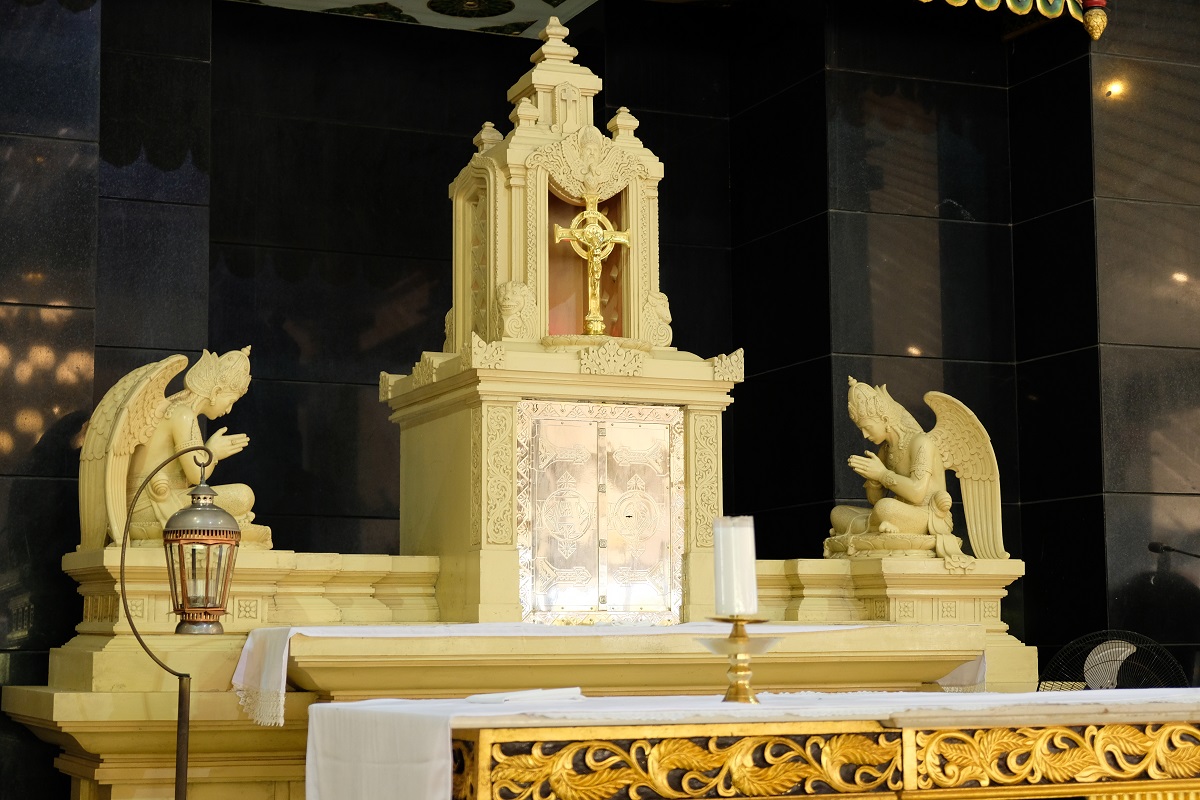 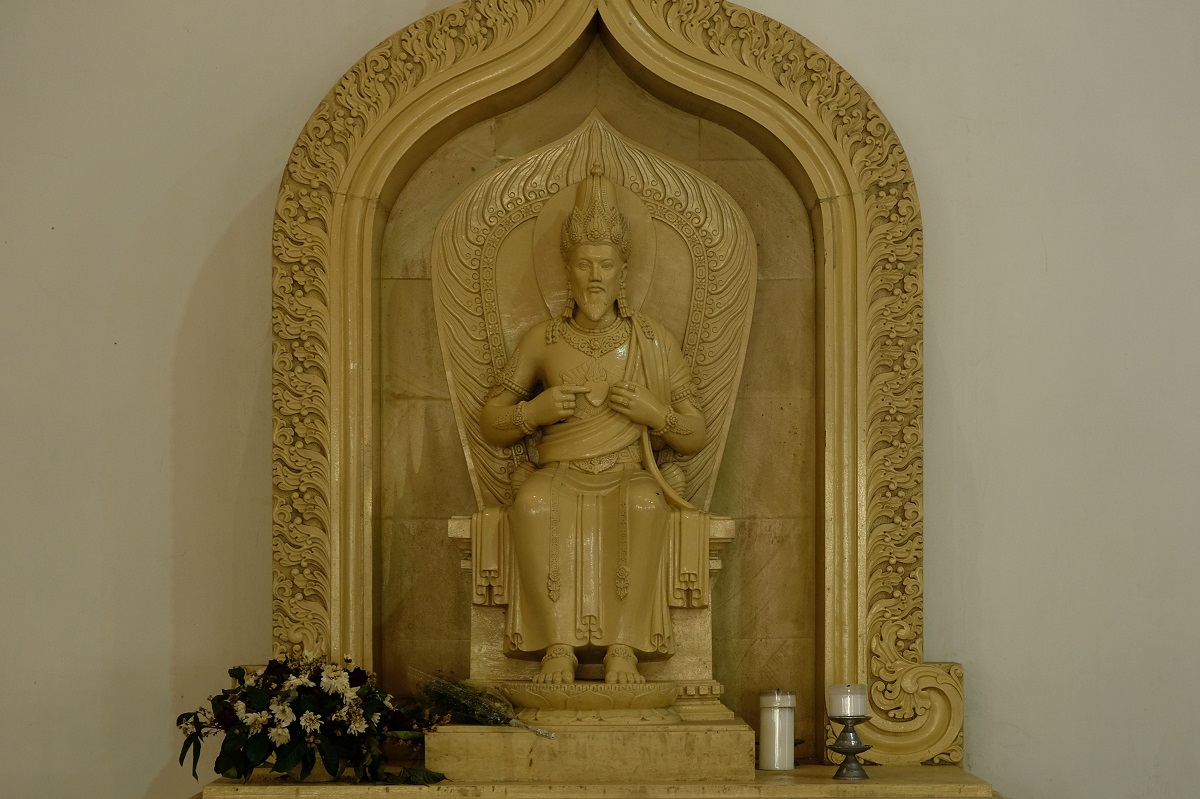 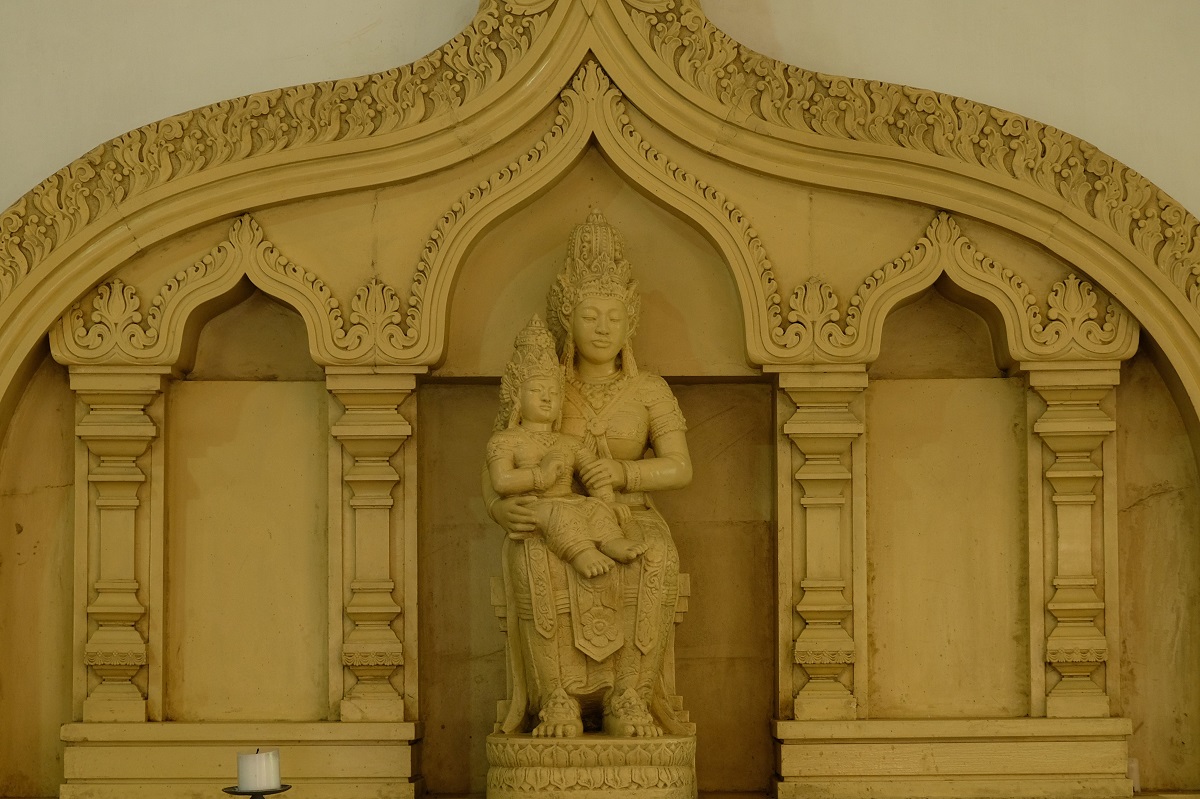 The Virgin Mary and Child also depicted in Hindu-Buddhist style 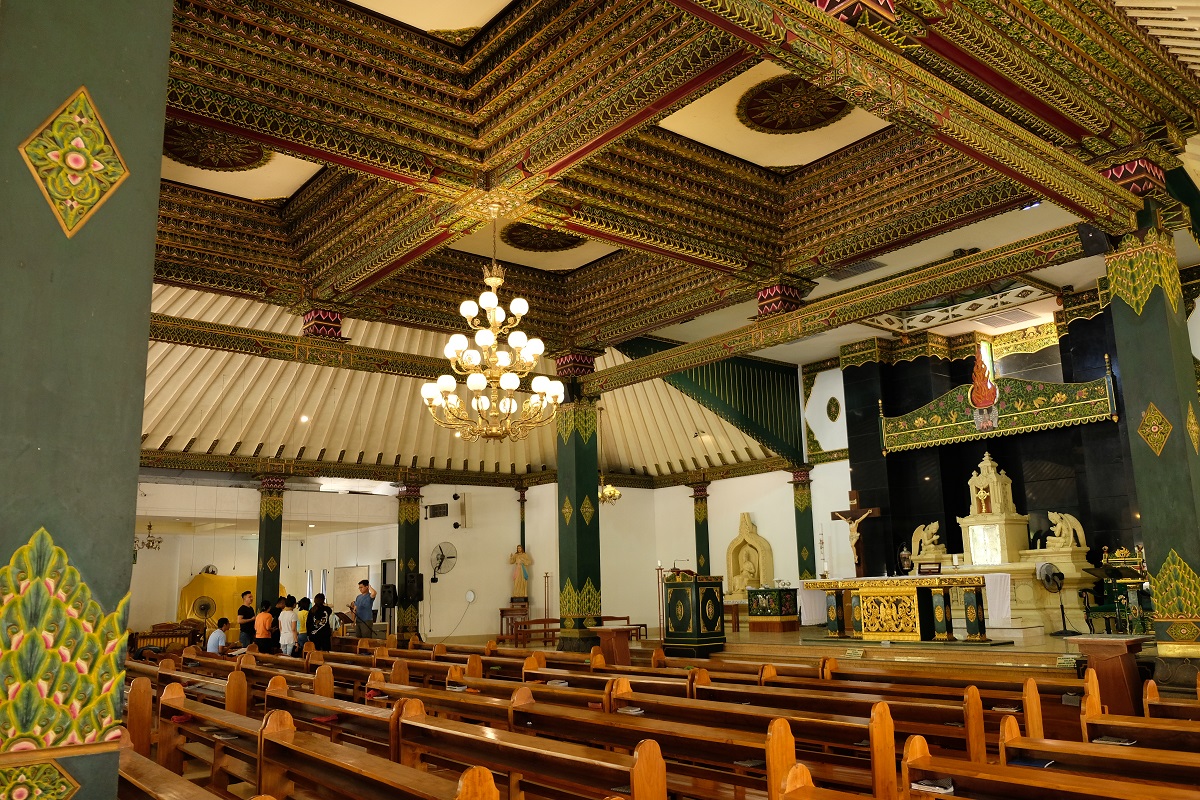 Young men and women practicing a number of church songs 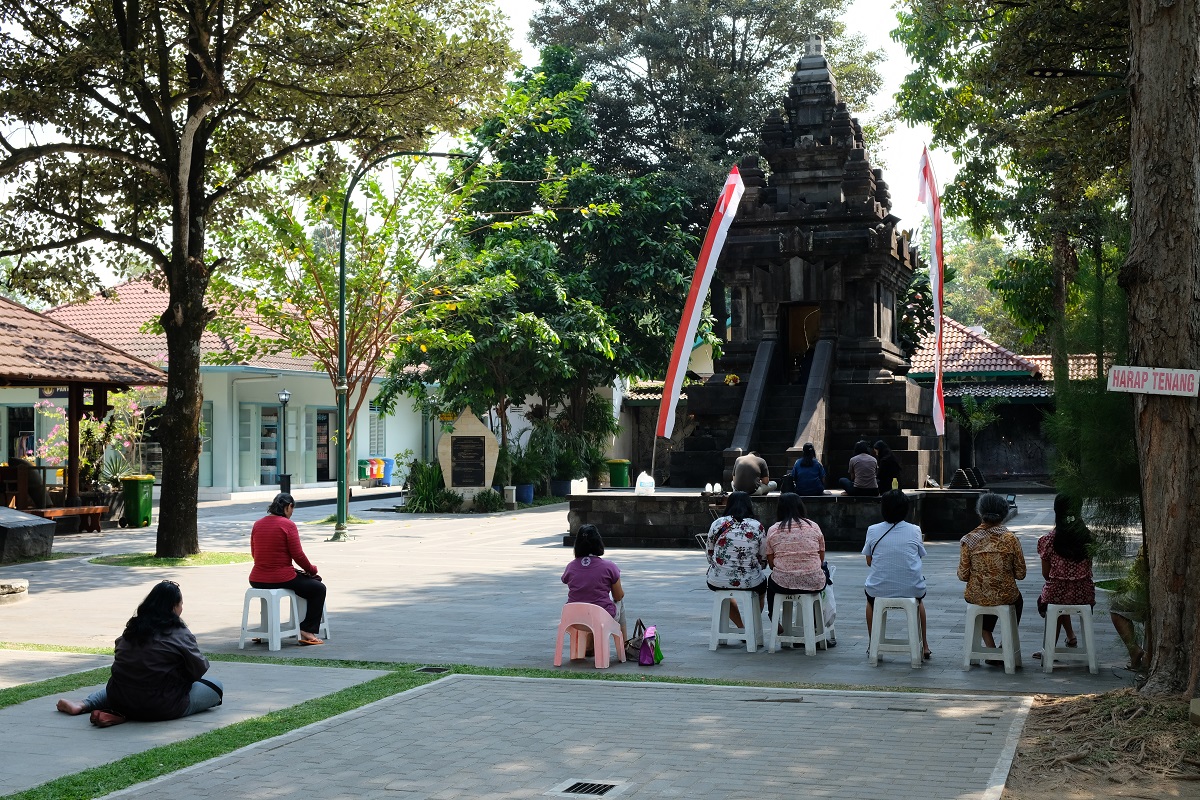 Praying in front of the small ‘temple’

One of the Stations of the Cross 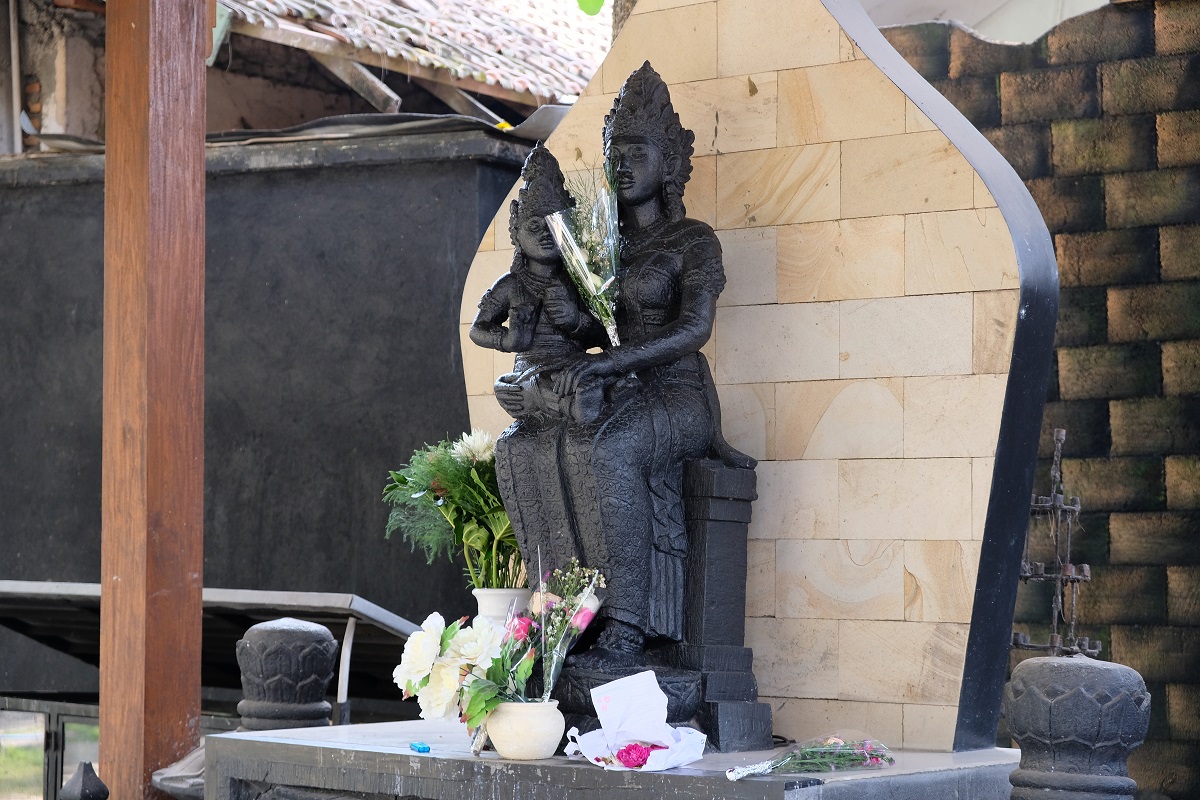 Another depiction of Mother Mary and Child

35 thoughts on “A Morning with Javanese Jesus”