Hong Kong is a fast-paced city – no doubt about it. Those who have been there must have come across and seen firsthand how fast the people walk, how efficient and punctual the MTR trains are, and how quick the service at restaurants is, to name a few things. On my first trip to Hong Kong in January 2012, I was lucky enough to meet a fellow blogger and native Hong Konger, James, who was willing to take me around the city in one day to visit some not-so-touristy places as well as some very popular ones. After all, having a local to show us around is the best way to experience a place, isn’t it? Well, in the case of Hong Kong the answer is not a simple yes or no.

In 2015, Jeff of Planet Bell decided to visit Hong Kong with his wife Kristi after traveling across Indonesia for two months. The ever-generous James offered to take them around the city and showed them parts of Hong Kong most foreigners wouldn’t know. And as expected, Jeff shared his story of the speed-walking tour he and his wife did with James in the most hilarious way. I myself walk a lot faster than most Indonesians, and even one of my friends from high school once said that when I walked, it looked like as though I was trying to catch a thief. But that trip to Hong Kong really opened my eyes about how fast some people on earth can walk.

However, as I began to learn and dig deeper into Hong Kong’s history, its economic boom, and its current status as one of the world’s financial centers, and as I return time and again to this city to observe and experience its dynamics, the more it makes sense as to why everything there is fast-paced. Its public transport system is highly reliable, allowing people to plan their day ahead, down to the minute if they want. Space is at a premium (40% of Hong Kong’s total area is green space, 35% is agricultural and semi-rural, and the rest is urban area where most of its 7.5 million residents live) making its property market the world’s most expensive. Consequently rents are exorbitantly high, forcing restaurant owners and employees (among other people) to serve their customers really fast while expecting them to finish their meals quickly as well. Otherwise they won’t be able to bring home enough money to pay the rent. In the past I was baffled, and at times slightly intimidated, by how fast the food came every time I went to Hong Kong. But I think I can cope better now.

Exploring Hong Kong on a whirlwind tour seven years ago allowed me to visit a lot of places in one day – James took me around Central, introduced me to the world’s longest outdoor escalator system, showed me beautiful colonial buildings on Hollywood Road, and led me to the Museum of Coastal Defence near Shau Kei Wan, Dr. Sun Yat-sen Museum at Mid Levels, Lugard Road on The Peak, and the ultramodern Legislative Council Building in Admiralty, to name some. We hopped aboard the Star Ferry across the scenic harbor and had lunch in Tsim Sha Tsui, and for dinner we headed to Causeway Bay which is always filled with a sea of humans.

Last Christmas I got the chance to return to Hong Kong (my fifth trip to the city) for a week filled with lots of walking and eating, some singing, a visit to a newly-restored heritage complex in the downtown area as well as a defunct textile factory in the New Territories which has been transformed into a cool and inspiring center for art and culture, complete with interesting independent retailers. In addition to that, James also took me to some of the places in the city which I had previously visited, but luckily this time we walked at a slower pace – living in Indonesia for more than two years has had an apparent impact on my travel buddy’s walking speed. Not having to rush around allowed me to notice more things – mundane sights that could have otherwise been ignored if we didn’t slow down: the types of fruits and vegetables available at a local market; the glistening barbecued pork, hard-boiled eggs, and roast duck at a street stall; small independent shops in the city and beyond; and fluffy cats that were too cute not to pet, for example.

The weather wasn’t always nice and sunny on this trip, but when the sun did come out we made sure to make the most of the day exploring not only the city, but also one of Hong Kong’s many small islands and the district of Tsuen Wan, some 20 km away from the downtown area. In the upcoming weeks I will share with you the stories of how an institution known for betting and a lottery helped restore the city’s Central Police Station compound to make it relevant for the future, how one of Hong Kong’s biggest property companies envisioned its derelict warehouses as a place to reinvigorate the local community and spark people’s creativity, and how a sun-kissed island retains its centuries-old traditions and has become an unlikely place to find what is arguably one of Hong Kong’s most fascinating independent retailers. Exploring Hong Kong is fun, and there’s always something new every time I return. 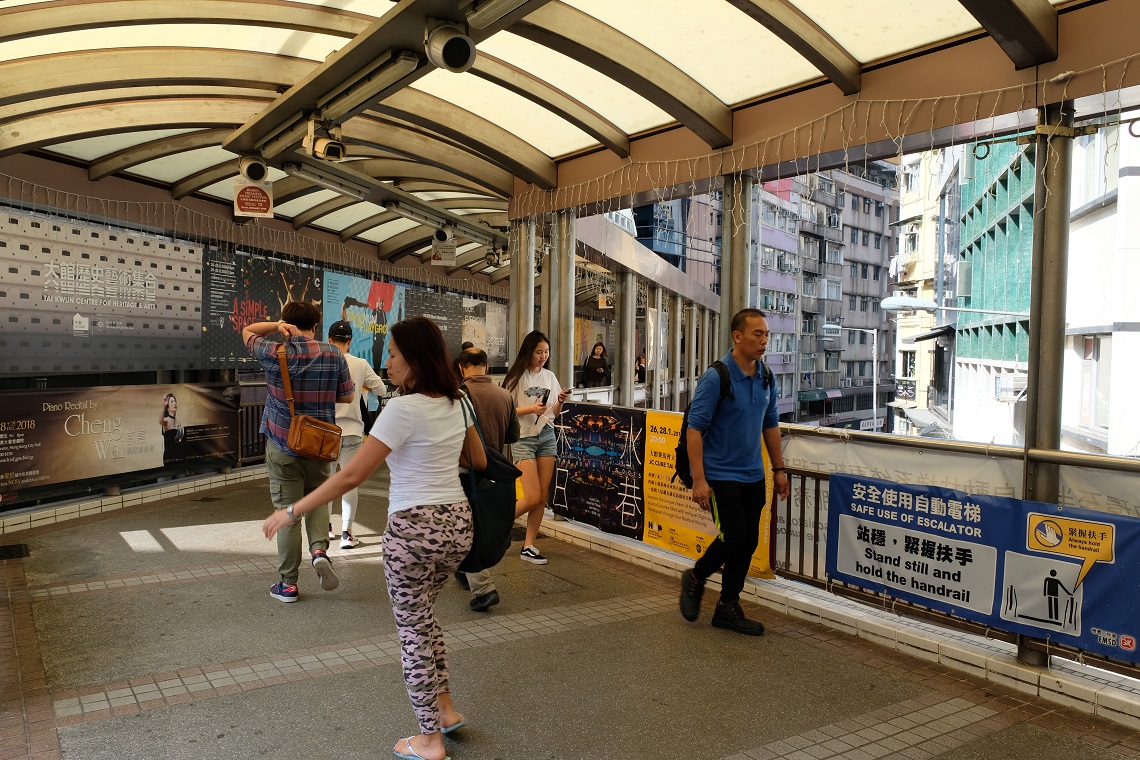 One section of the outdoor escalator system 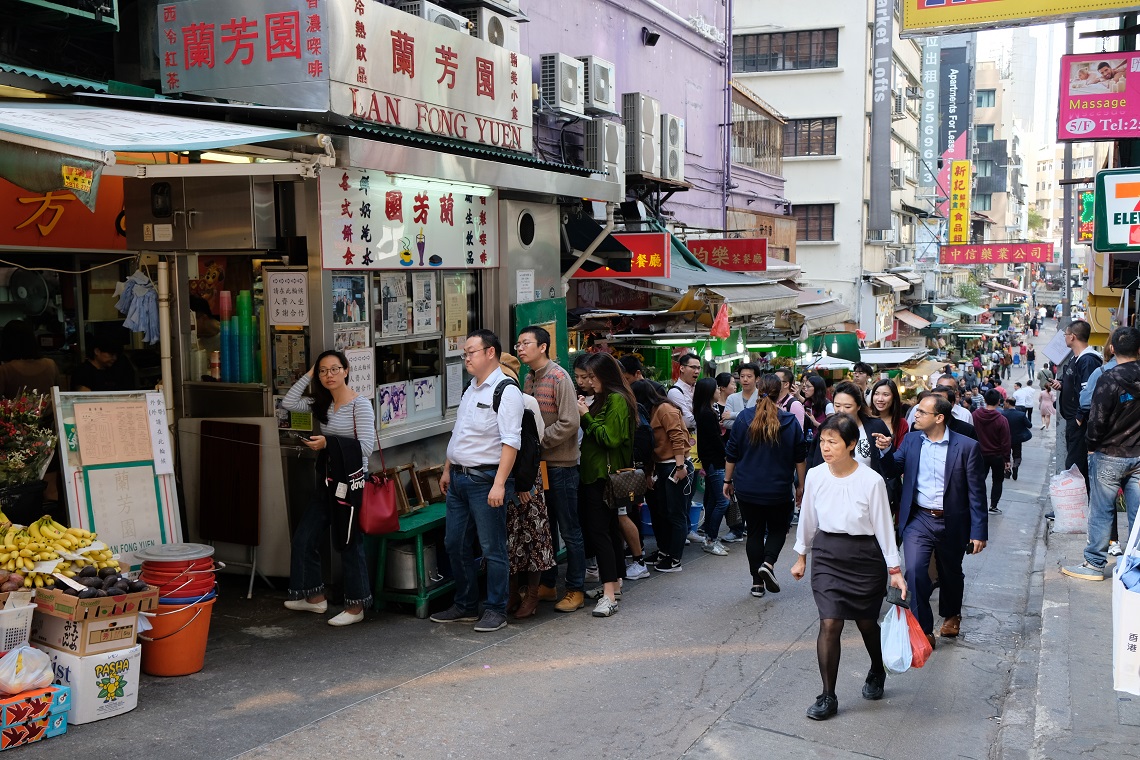 People lining up for lunch, a common sight in this densely-populated city 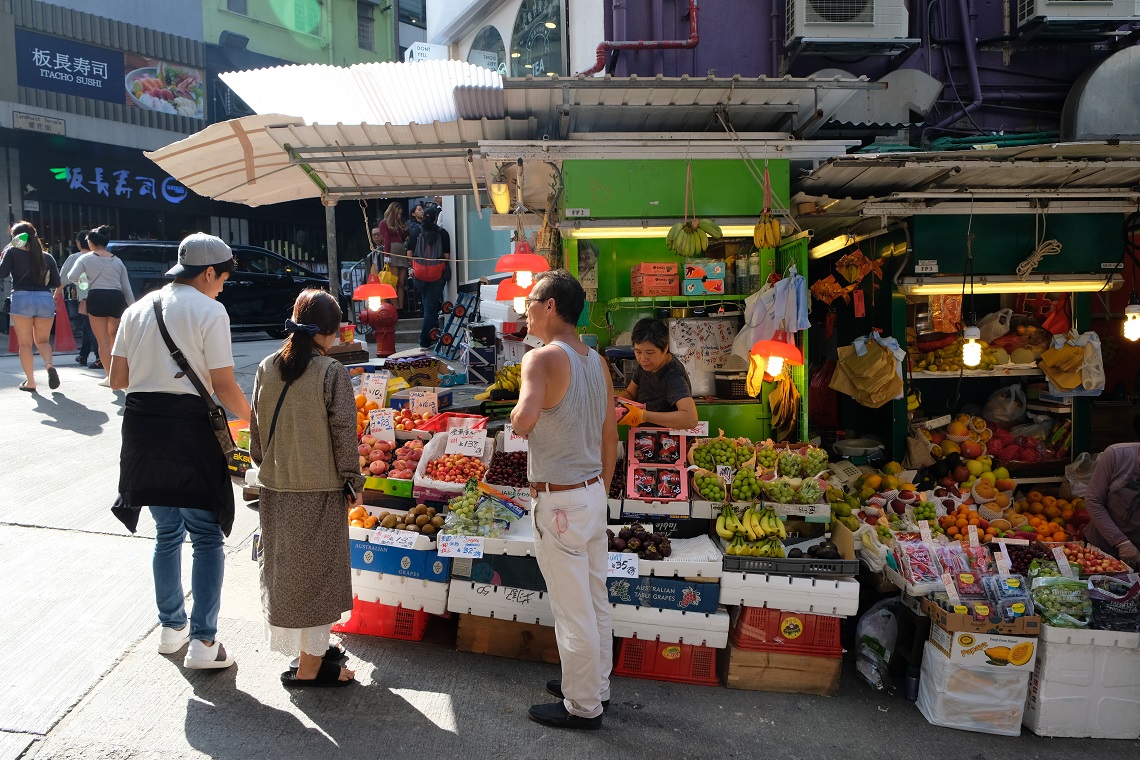 Fresh fruits, probably from China, Southeast Asia and beyond

Walking your dog while doing your grocery shopping? Sure, why not?

A glimpse of Hong Kong people’s affinity for pork

She only wants the best fish 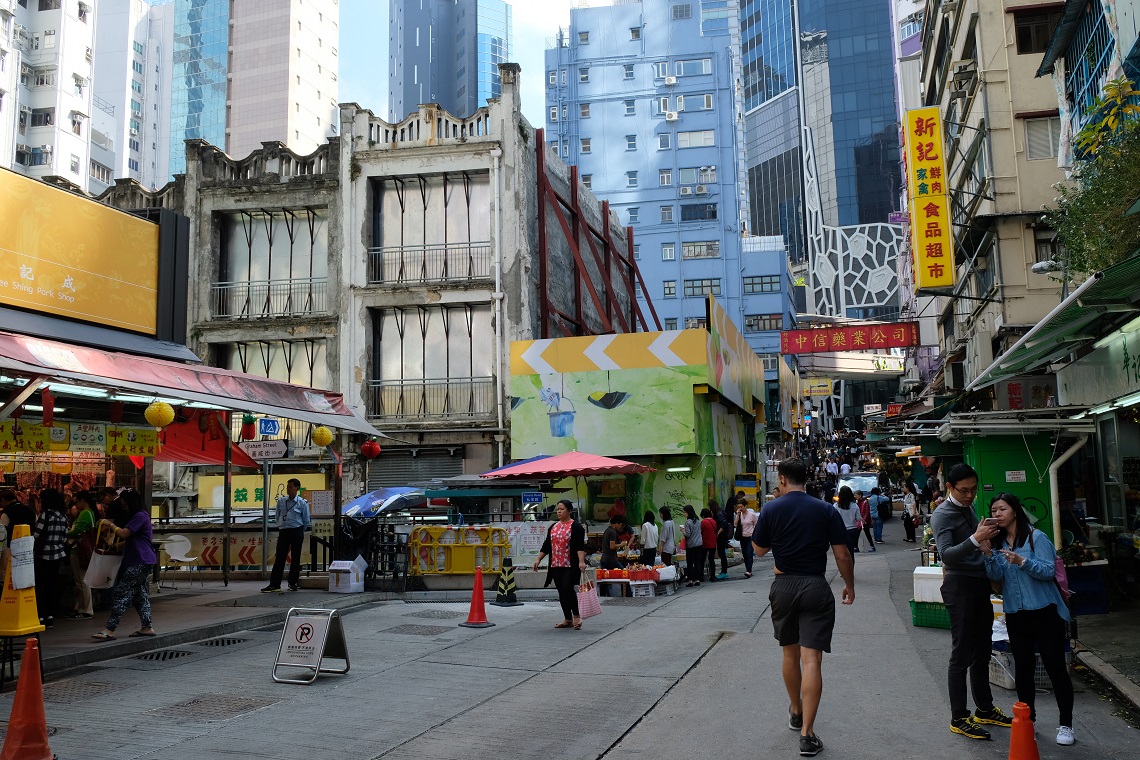 A traditional street market in Central in the midst of redevelopment

The vegetable section of the market

The entrance to Western Market 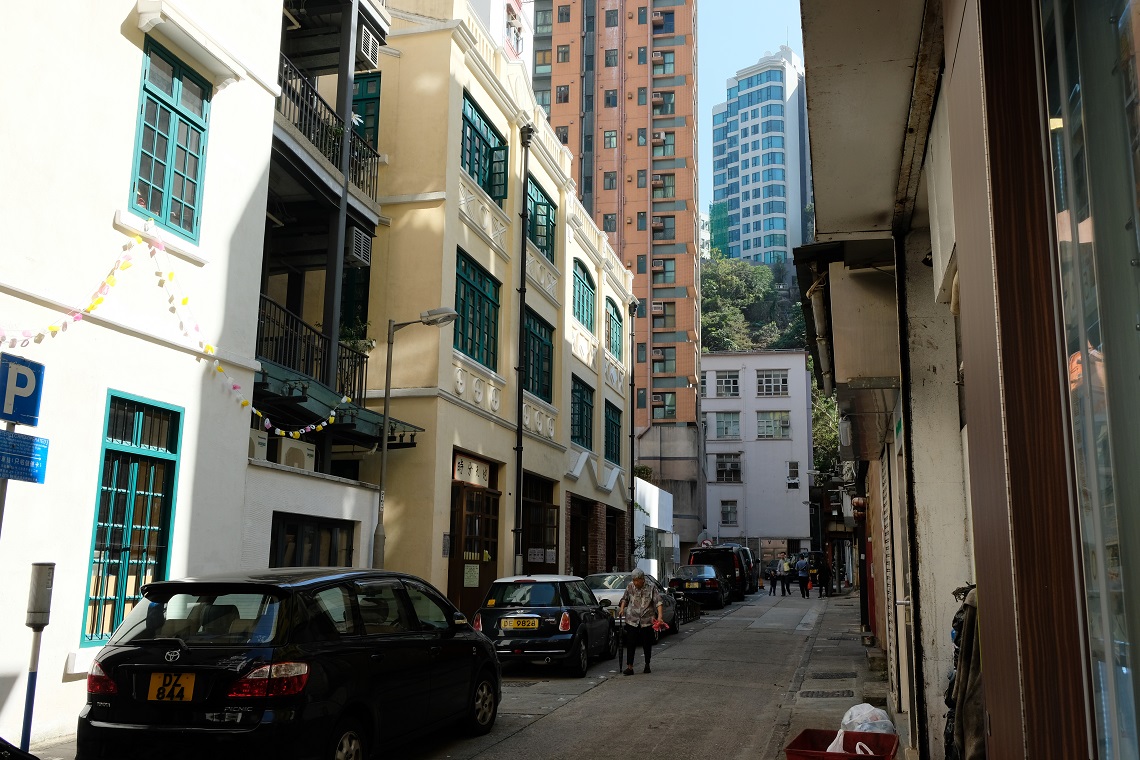 The recently-restored Yellow House, behind the Blue House in Wan Chai 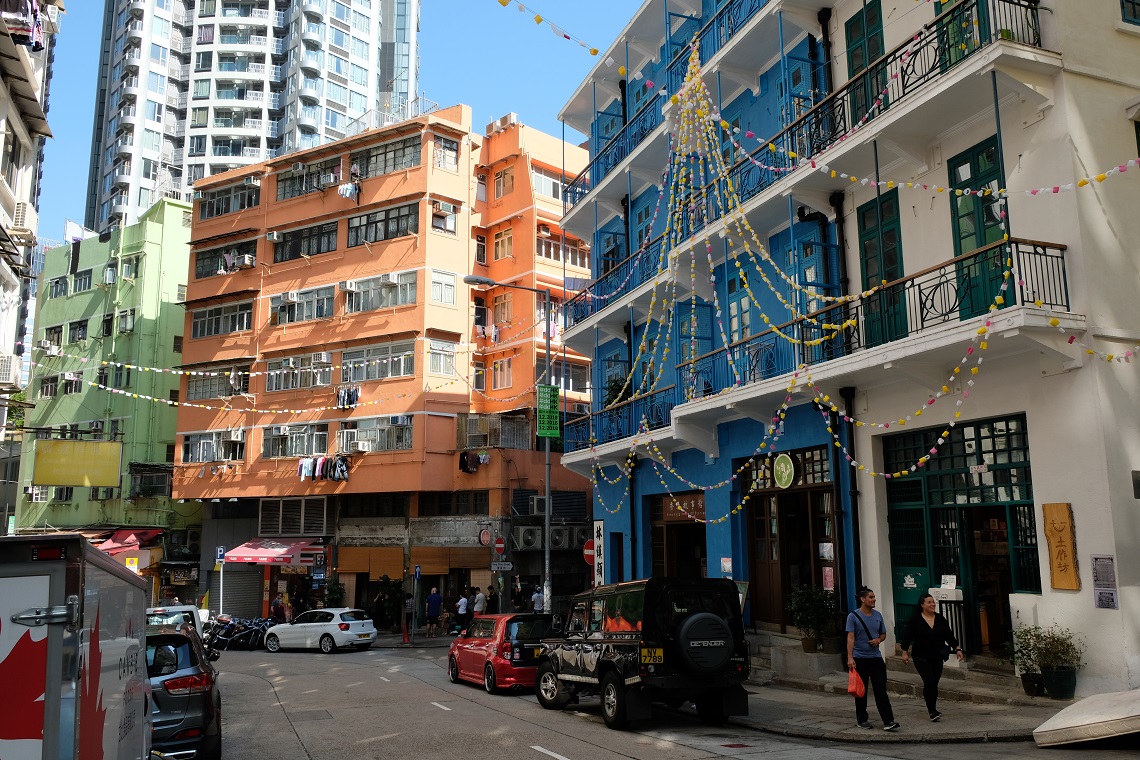 The 1920s Blue House, next to the Orange House (which is actually called Fu Lok Building)

A shop-cum-community center at the Blue House 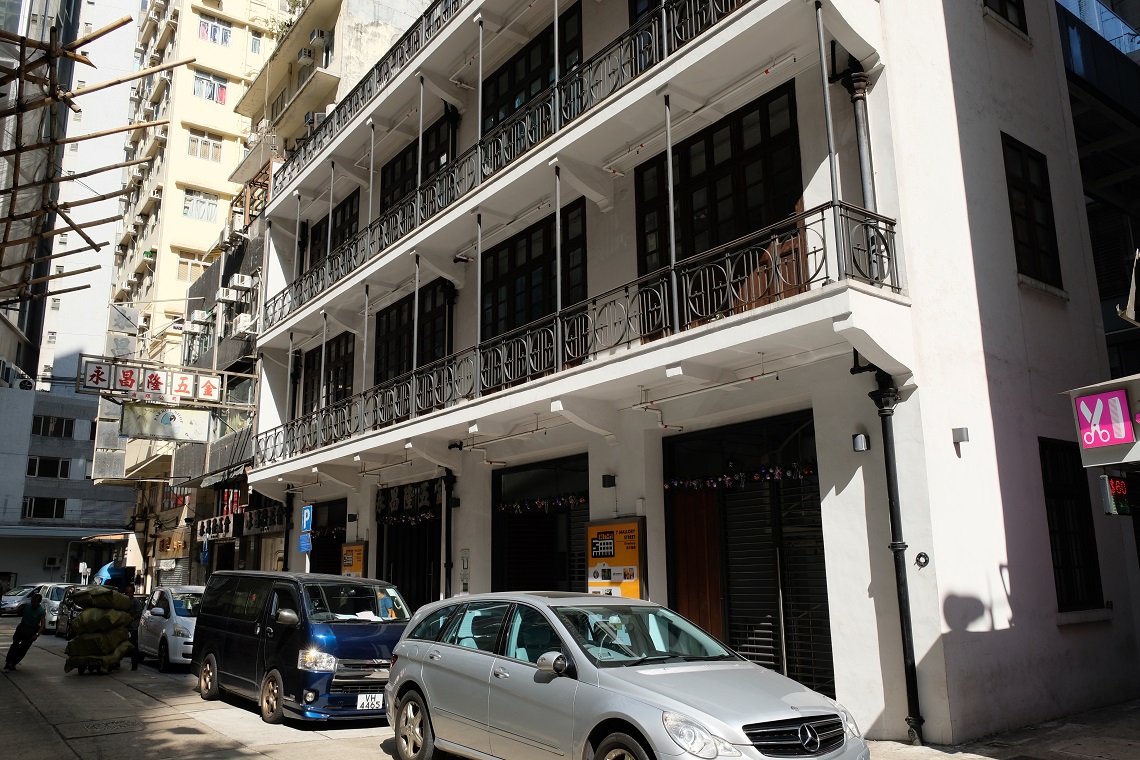 7 Mallory Street (formerly Comix Home Base), a community center for art and culture

A mouthwatering display at a street stall in Wan Chai

Inside a cha chaan teng, a type of neighborhood diner found in Hong Kong and other Cantonese-speaking regions 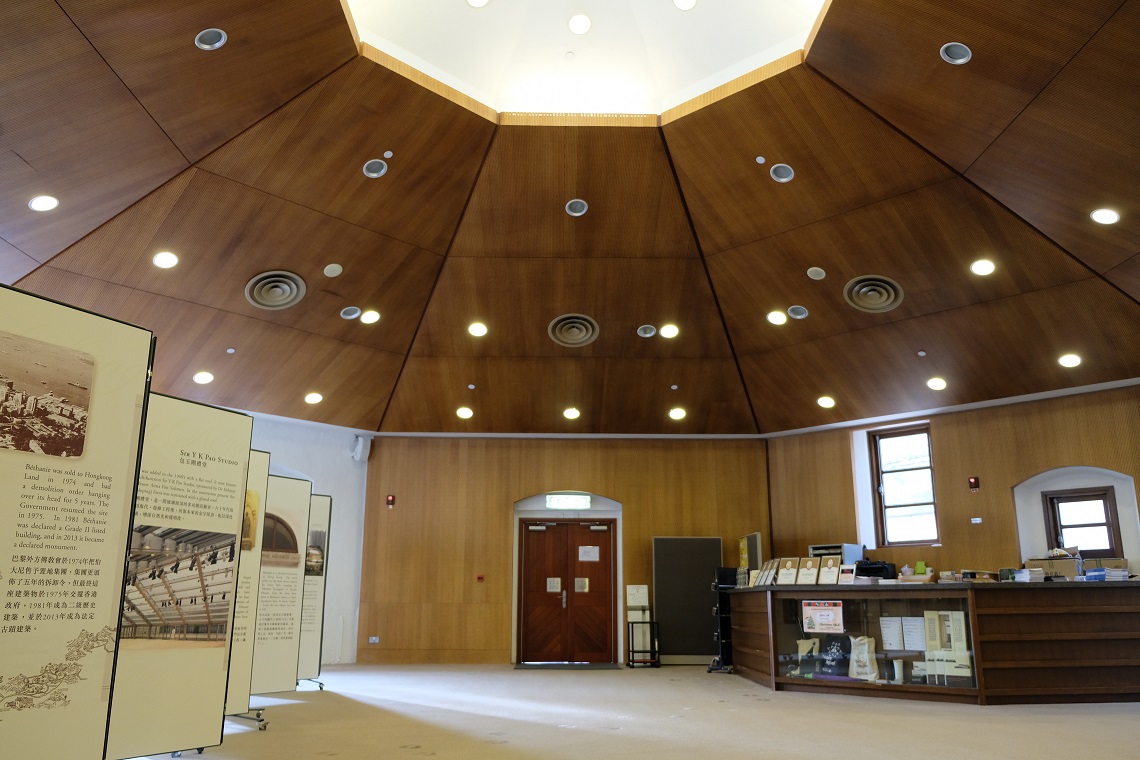 The exhibition area inside the cowshed 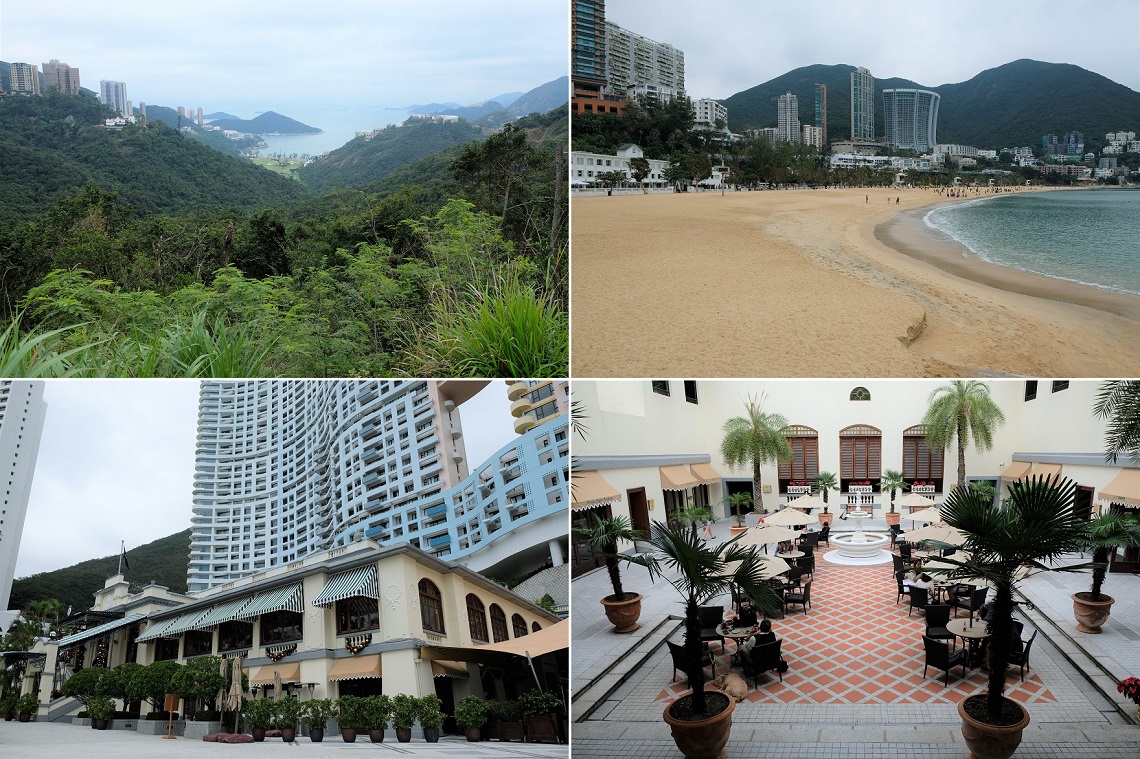 A friendly cat in Jordan, Kowloon 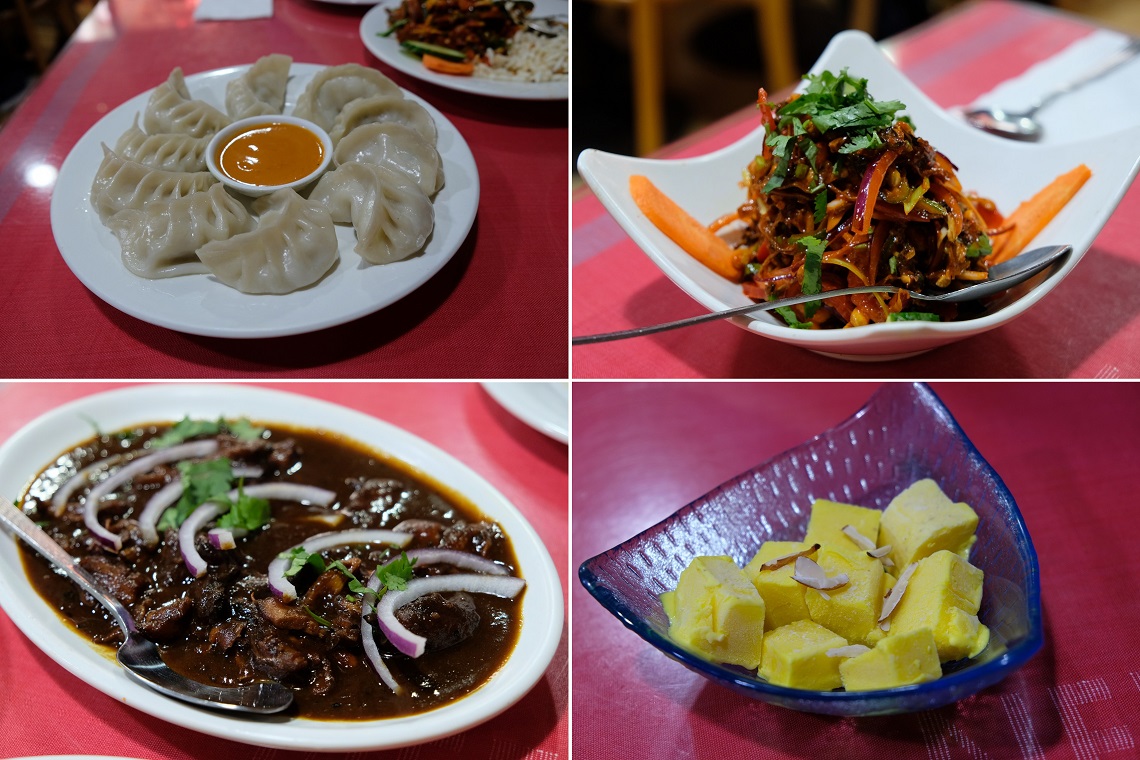 Satisfying our craving for Nepalese food at Manakamana on Temple Street, Jordan

60 thoughts on “Hong Kong at a Slower Pace”