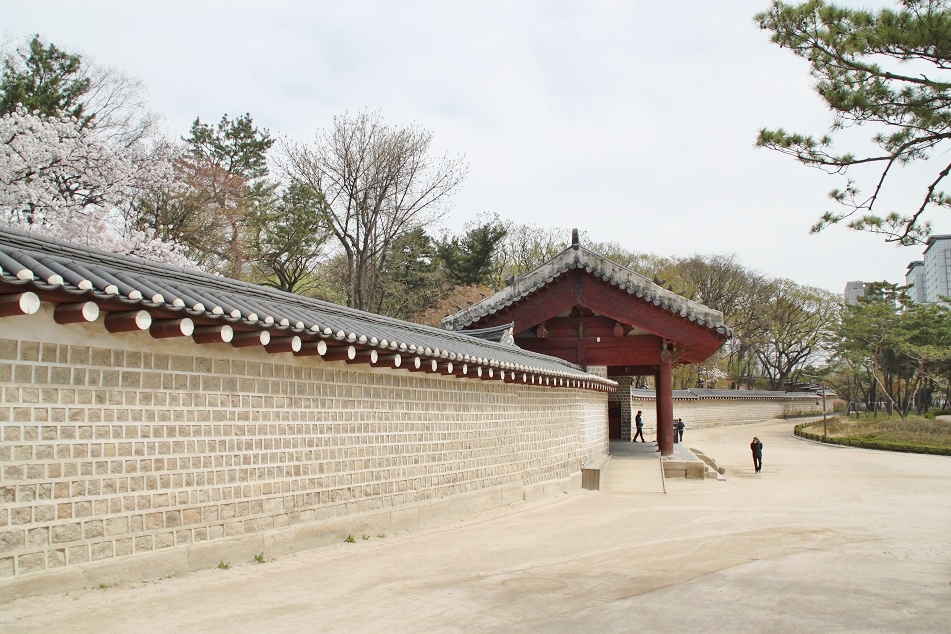 The outer wall of the shrine

In the past, great temples, shrines and places of worship were often constructed to signify the rise of new kingdoms and empires, or to commemorate significant events, or even to appease gods and goddesses. Normally a great amount of time and wealth was expended, and the work involved the most talented sculptors and artisans to create richly-decorated structures built not only to last, but also – and most importantly – to impress. All but a few of those structures followed this pattern.

In 1392, Yi Seong-gye who at that time was the general of the Goryeo dynasty – which controlled much of the Korean peninsula – overthrew King Gongyang to become the new king himself. This event effectively put an end to the 474-year-old dynasty and marked the beginning of the Joseon dynasty which would come to rule the peninsula even longer than its predecessor. Yi Seong-gye took the name King Taejo and under his rule Confucianism became the state ideology, replacing Buddhism which had enjoyed a special status as the preferred religion of the previous dynasty.

A few years into his reign, King Taejo commissioned Jongmyo, a shrine dedicated to honoring the king’s ancestors, one of the most important rites in Confucian tradition. Built at the heart of what is now the city of Seoul, the shrine’s architectural style is a testament to the new dynasty’s focus on good governance, education and a strong work ethic rather than artistic endeavors (as I learned from my visit to the National Museum of Korea a few days earlier), emphasizing functionality with a relatively austere look.

The palaces were where the kings and the royal family used to live, while the tombs were where they were buried. Jongmyo, on the other hand, was where the ancestors’ spirit tablets were kept; it was meant to be a place where the living met the deceased. And for this purpose, a three-row stone pathway was laid from the shrine’s south gate all the way to the core structures within the walled compound; the elevated center row was reserved for the spirits, the right side (the east road) for kings, and the left side (the west road) for crown princes.

Three-row stone pathway dedicated for the spirits, kings and princes

One of the longest ancient wooden buildings in Asia 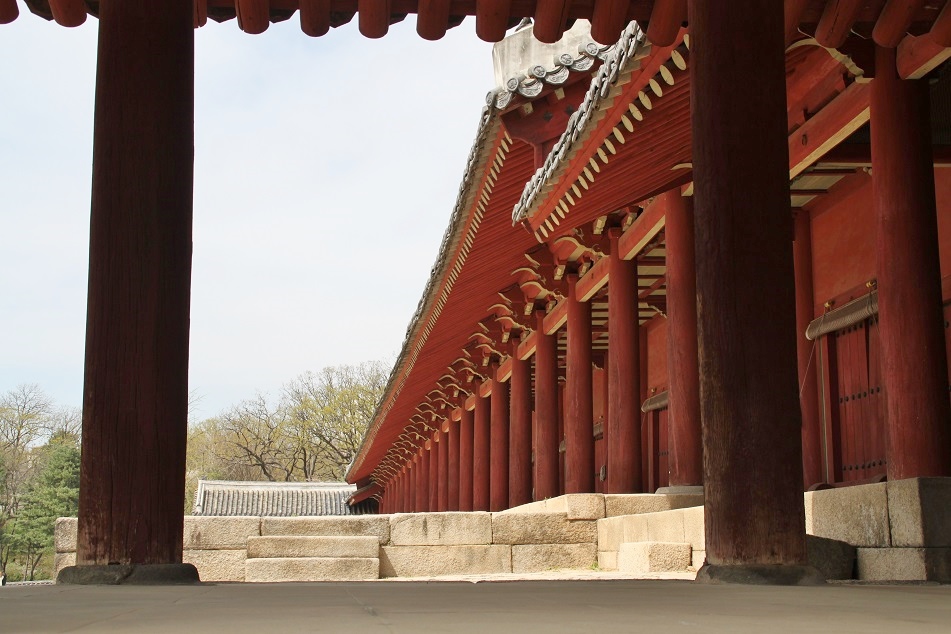 Home to the spirit chambers of Joseon rulers

A prime example of Confucian aesthetics 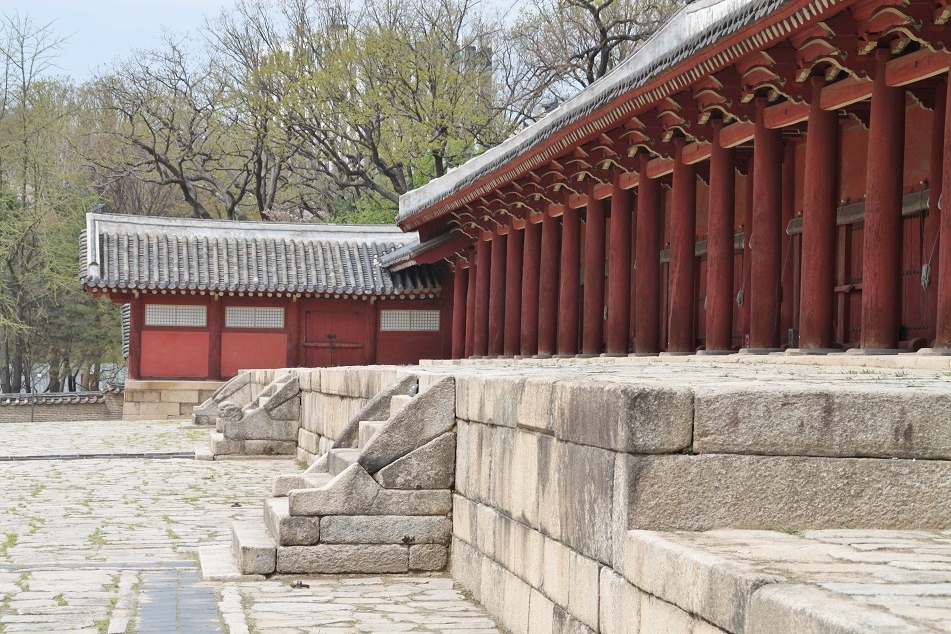 The stone platform on which the main hall stands

A centuries-old water spout at the courtyard of Jeongjeon

During the rule of the Joseon dynasty, when a king died a spirit tablet was created and kept in the palace for a traditional three-year mourning period after which it was then moved to Jongmyo. Jeongjeon – originally built in the late 14th century – is the oldest of the two halls where the spirit tablets are enshrined. Comprising 19 so-called spirit chambers spanning 101 meters, it is believed that the structure was once among the longest wooden buildings in Asia. Even today its most striking appearance is its long dimension, although it remains true to the Confucian aesthetics: architecturally simple which relies on repetition. When the chambers of Jongjeon ran out of space, another hall called Yeongnyeongjeon was constructed to its northwest.

When Japan invaded Korea in the late 16th century, they burned down symbolically-important buildings, including the royal palace of Gyeongbokgung and the old ancestral halls of Jongmyo, to demoralize the Koreans. However, the sudden death of Toyotomi Hideyoshi – the de facto ruler of Japan – in 1598 forced the invading forces to retreat. Subsequently, Jeongjeon and Yeongnyeongjeong were reconstructed several years later and Jongmyo resumed its role as the principal shrine of the Joseon dynasty. Despite the destruction of the previous structures, the original spirit tablets were fortunately removed from the halls prior to the blaze, and safely hidden in the house of a commoner.

In 1995, long after the end of Korea’s last monarchy, Jongmyo was inscribed as a UNESCO World Heritage site, becoming one of the first sites in South Korea added to the list. The 17th-century reconstruction survives to this day, as do the spirit tablets. Nevertheless, since the time of the monarchs has long gone, no kings and crown princes walk on the right and left sides of the stone pathway now. The central elevated path, however, is still reserved for the spirits, and reminders of this are placed at regular intervals to make sure the old tradition is respected even by those who no longer practice it – a real challenge in fast-changing South Korean society and amid the influx of foreign visitors who come from different cultural backgrounds. 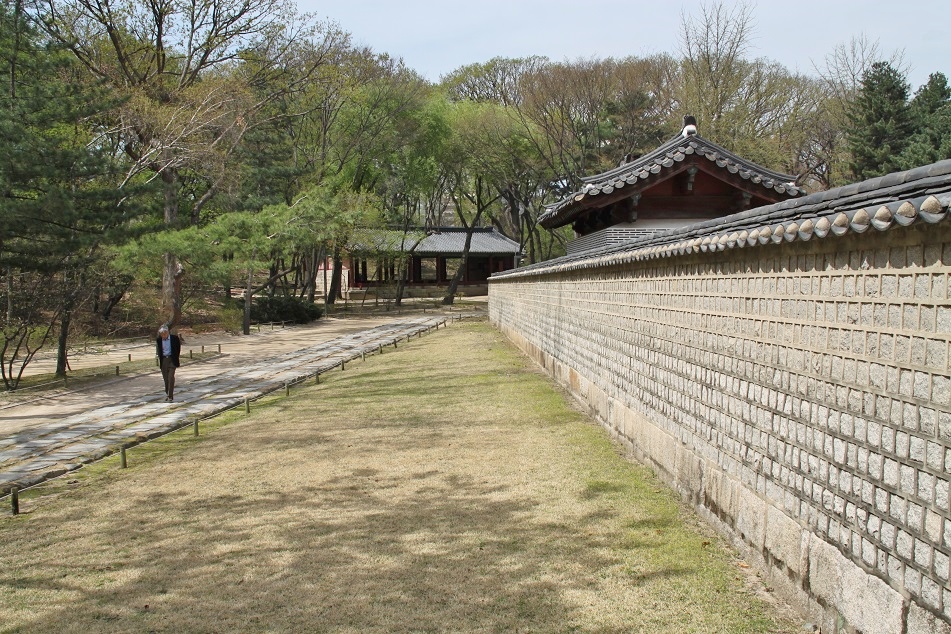 The protective walls of Jeongjeon

Yeongnyeongjeon, added to the Jongmyo shrine compound when Jeongjeon ran out of space

A tranquil setting in ever-bustling Seoul

A head-turning sight at Jongmyo shrine

30 thoughts on “Jongmyo: Walking alongside the Spirits”