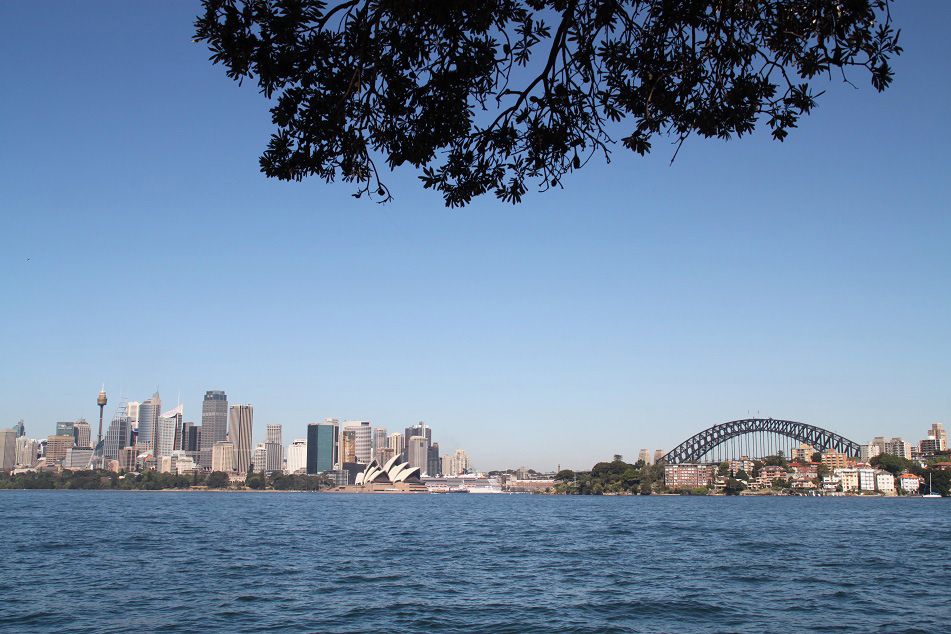 One Thursday night during rush hour in Jakarta, the city’s notorious traffic became an even bigger nightmare as construction sites all over the metropolis forced all sorts of vehicles to crawl even more slowly than a snail would. The city’s streets were practically one big parking lot – imagine the amount of noxious gases choking the city that night. Fortunately the flight that would take us to Sydney was scheduled to depart an hour before midnight, giving our taxi driver ample time to navigate the gridlock of Indonesia’s burgeoning capital. In the end it took me a good 3.5 hours to get to the airport compared to 45 minutes without traffic. Thankfully once James and I were on the plane, warm chicken curry-stuffed pastries and cool juices welcomed us before we closed our eyes tens of thousands feet in the night sky.

Four hours later, I woke up to a breathtaking view. The sun was rising on the horizon, bathing the landscape below in a dramatic reddish hue. We were flying over the Outback, the vast desert that makes up the heart of Australia. After a much-needed breakfast and a refreshing guava juice, my exhaustion from the night before slowly dissipated, supplanted by a growing excitement as we were just a few hours away from our destination, purportedly one of the most beautiful and livable cities on the planet.

As the plane made its final approach to Kingsford Smith International Airport, my excitement was slightly dampened by the thick clouds that stretched as far as the eye could see. However, when the Harbour Bridge, the Opera House, and Sydney’s skyscrapers came into view, I couldn’t help but think, finally I’m here! At the airport, James, who is Canadian, only had to head to one of the machines that would validate his passport. Meanwhile, I still had to face the immigration counter with a long line of visitors waiting for clearance to enter the country. Luckily the officer was very friendly, unlike the typical immigration staff I encountered in many countries. After grabbing our baggage, we walked toward customs and handed the staff the customs declaration forms we filled in earlier. “Thank you, buddy!” another officer casually replied to my hello, a brief introduction to that famous Aussie laid back nature.

Taking a double-decker train to the city, we hopped off at Kings Cross, an inner-city suburb known for its nightlife, and one that has changed for the better in recent years. A report by Monocle in 2016 described how life was like for Kings Cross’ residents which involved more weekend housework than those in other neighborhoods. “Locals were having to wash down their steps to get rid of vomit and urine left there by revelers” and “the streets were littered with broken glass and people felt like prisoners in their apartments as they feared being assaulted by groups of drunken people” were how a convener of the local residents’ association described Kings Cross. However, thanks to new regulations by the New South Wales government, “the noise ceased – calm and a sense of safety returned. People can once again walk the streets without fear of harm and Kings Cross is a more pleasant place to be,” as claimed by the same convener. This was the Kings Cross we experienced as we left the metro station and walked a little uphill to Potts Point, a quiet and leafy neighborhood where we would spend four nights in Australia’s biggest city.

The Cathedral Viewed from the Town Hall

After checking in at our hotel, we walked down Victoria Street where pretty terraced houses, each embellished with ornate wrought iron decorations, stood in the shades of maple trees. Deciding to have a big brunch, we had a feast at Ms. G’s whose fusion dishes satiated our hunger and provided us with enough energy to explore the city for the rest of the day. From the balcony of the restaurant, I could see clouds over downtown Sydney slowly clearing up, giving way for sunshine to bathe the city with warmth. After filling up our stomachs with dishes like cheeseburger spring rolls, kingfish sashimi with aged ponzu sauce, Vietnamese-inspired steak tartare, burrata with an Asian twist, and tom yum fried rice, we headed to Hyde Park, the oldest public park in Australia.

Before I came to Sydney, I always thought the city was built on flat land. But the walk to Hyde Park proved how I couldn’t be more wrong – the city’s hilly streets at one point even reminded James of Vancouver. A short time later, we were already at the park, tucked right at the heart of the central business district with rows of high-rise buildings on its western fringes, and a collection of old structures to its north and east. The park was divided into two sections by Park Street. In the north part, the beautiful Greek- and Roman-inspired Archibald Fountain stood as a centerpiece, surrounded by colorful spring blooms. Visitors, joggers, and birds roamed the park, including Australian white ibises with their distinctive long curved beak. To the east, the towering spires of St Mary’s Cathedral glowed in the sun – it was only completed in 2000 almost a century and a half after its builders broke ground in 1868.

To the north of the park, a number of old buildings still survive to this day, including the UNESCO World Heritage-listed Hyde Park Barracks, St James’ Church, the old mint, and the early 19th-century Sydney Hospital. Beaming from the northern end of Hyde Park toward the harbor is Macquarie Street with the statues of Queen Victoria and Prince Albert standing on both sides of the beginning of the long street. We took this as an invitation to walk down the avenue, overlooked by modern and quirky office buildings on one side, and stately British-era edifices on the other. The latter sported soft, warm tones as most of them were made from limestone quarried from places around Sydney.

After walking for a few minutes, we arrived at the two-century-old Royal Botanic Gardens where locals and tourists alike strolled around its expansive grounds with a view of Sydney’s modern skyscrapers in the background. The botanical garden is also home to Government House, a 19th-century Gothic revival residence of the Governor of New South Wales which once also served as the official residence of the Governor-General of Australia. On the sloping lawns looking out to the scenic harbor, lovers and loners bathed in the warm afternoon sun as the Southern Hemisphere began embracing the joy of spring. Walking further north on leafy pathways eventually brought us to the most iconic landmark of the city: the Sydney Opera House.

Old Warehouses at the Rocks

Wandering around the Rocks 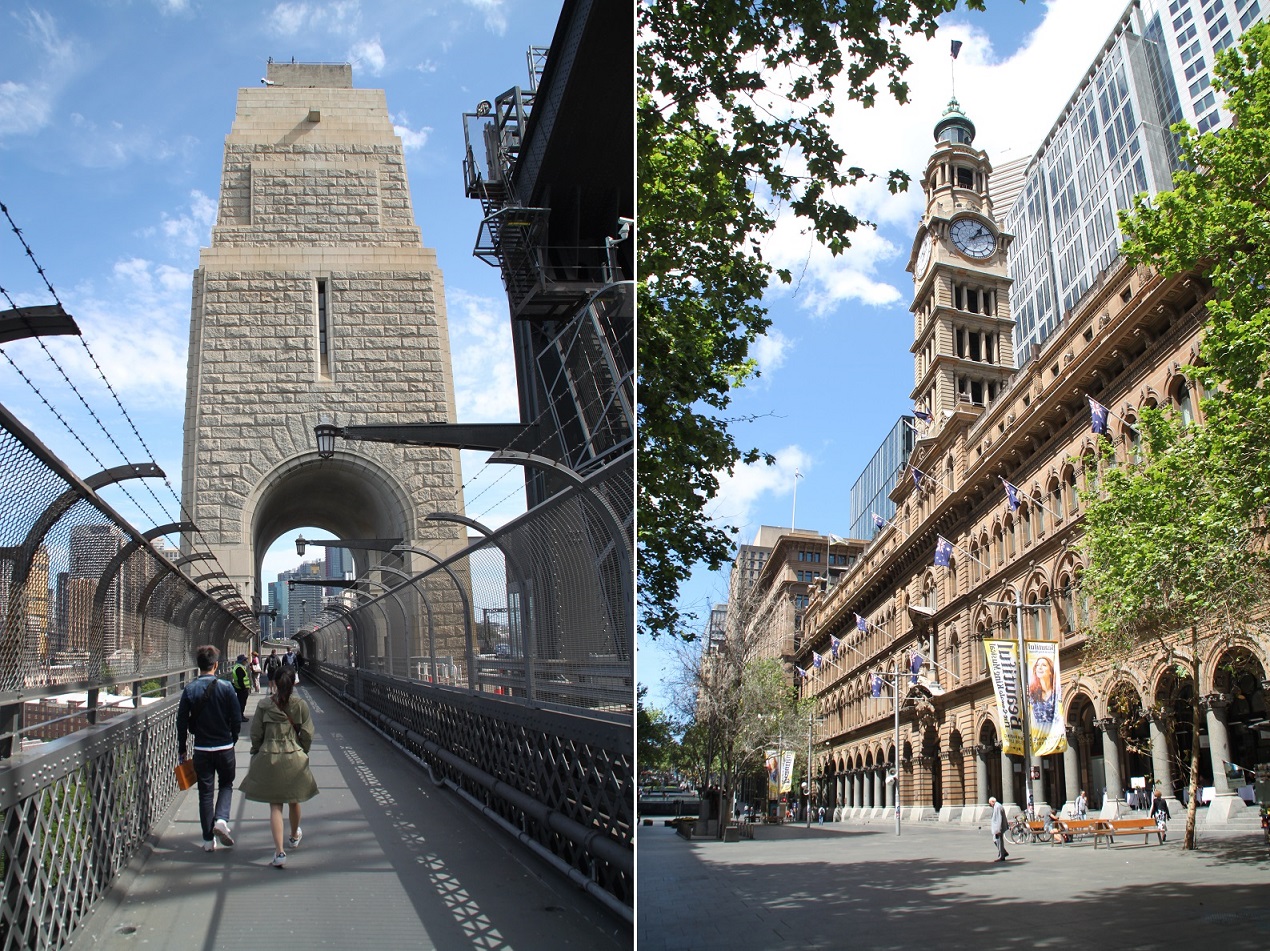 Towering Monuments from the Past

An Intersection Near Central Station and Belmore Park

Between Lee Street and George Street where Asian Restaurants Abound 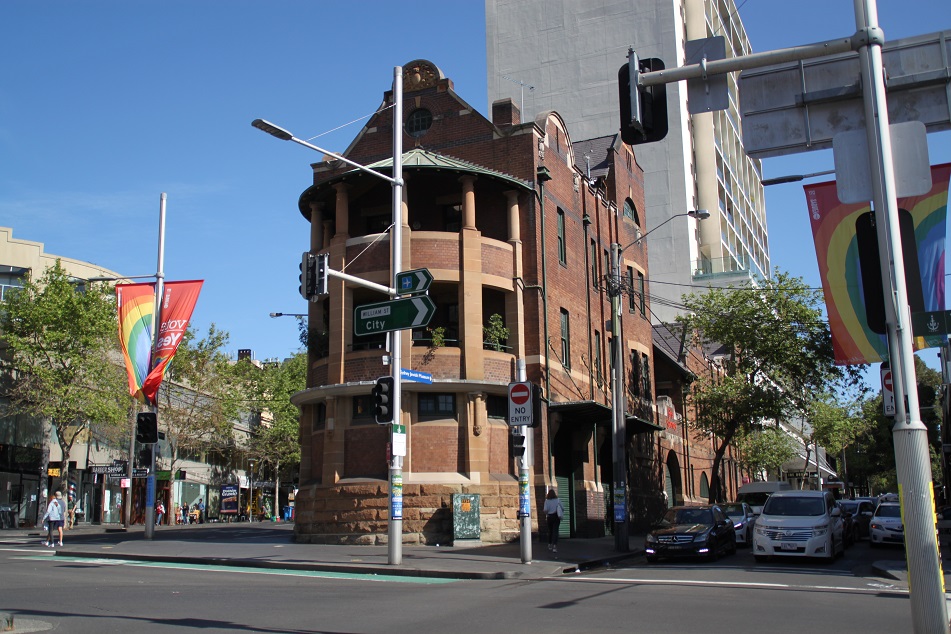 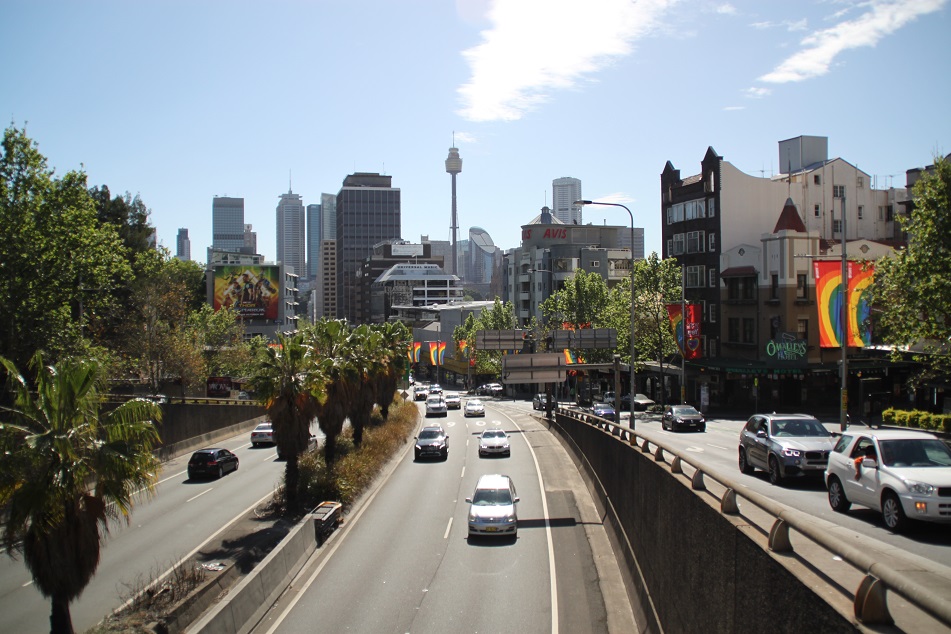 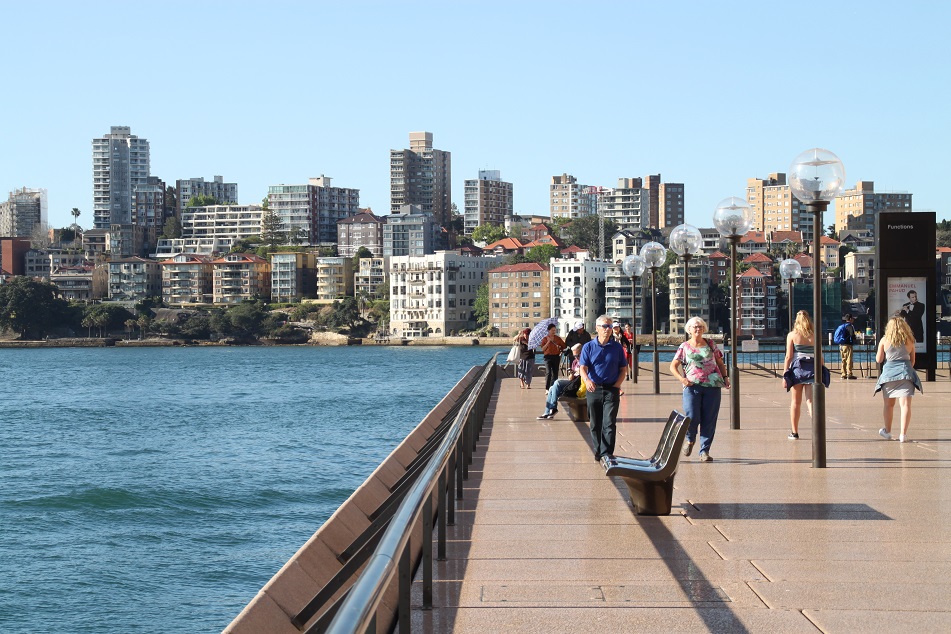 Enjoying the Breeze around the Opera House

An Afternoon Stroll at the Royal Botanic Gardens 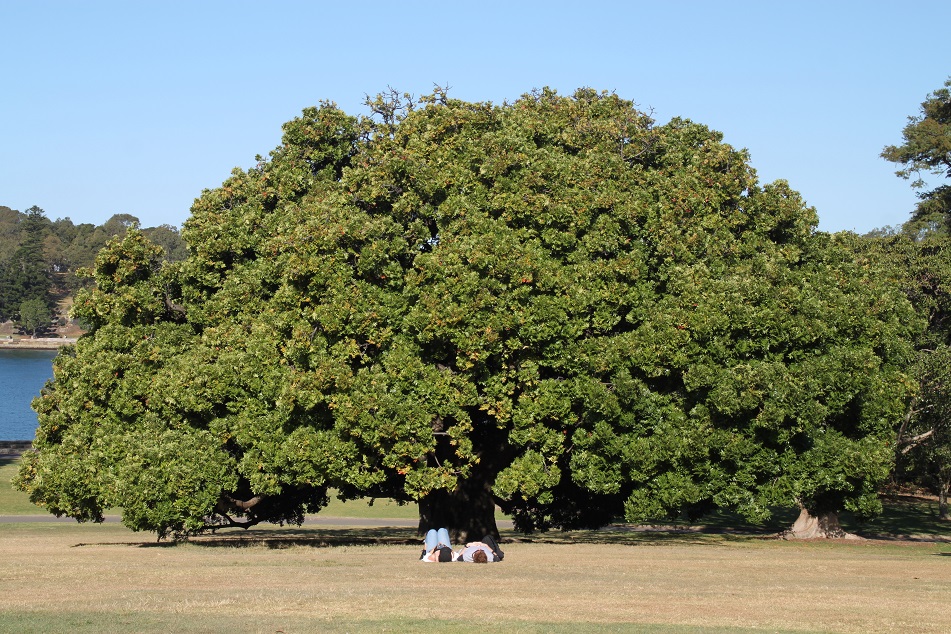 Despite the Beautiful Harbor View, They Prefer This Big Tree 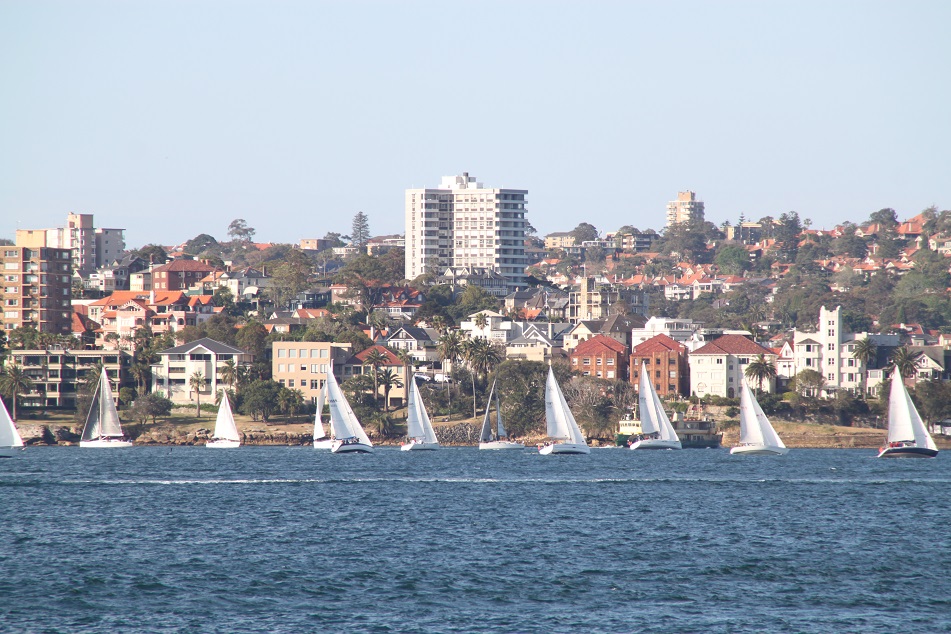 A City of Sail Boats

The CBD Viewed from the Iconic Harbour Bridge

Designed by a rather unknown Danish architect, Jørn Utzon, in the late 1950s, the futuristic-looking structure was inspired by shells. However cost overruns and other problems – given the project’s ambitious scale – forced its completion to be repeatedly delayed. Finally, in 1973 the giant shells at Sydney Harbor was officially opened by Queen Elizabeth II herself, marking a new era for the aspiring city. As we approached the Opera House from the garden, the smooth curves of the white shells glistened in the sun. Tourists circumambulated its base both marveling at the ingenious architectural wonder and taking selfies and wefies for their social media posts. The equally impressive Harbour Bridge stood proudly behind us, straddling the highly-indented coasts of Port Jackson, the natural inlet where the First Fleet arrived centuries earlier to claim ownership of this land.

The sun was still high, so we decided to walk along the promenade of a small cove to reach Mrs. Macquarie’s Chair before sunset. Elizabeth Macquarie, the wife of Lachlan Macquarie – New South Wales’ early 19th-century emancipist governor – was said to frequent this area, watching ships from Great Britain entering the harbor. She loved the spot so much a chair was carved into a sandstone outcrop for her to sit and enjoy the view. As the strategically-located chair is situated on the tip of a peninsula with a sweeping view of Potts Point to the east and the Opera House to the west, today it provides visitors with a good vantage point to admire the night skyline of downtown Sydney. We found ourselves a bench to sit and wait for the sunset, while watching some locals running or walking their dogs, as well as tourists brimming with smiles upon seeing the beautiful scenery before their eyes.

As the sun slowly went down on the western horizon, we got up and moved to a viewing platform where a dozen other sunset enthusiasts had already waited. A small table was curiously placed under a tree near the platform, with candles and a few other paraphernalia placed on its top. A few Aussie blokes, probably in their 20’s with some holding SLR cameras, were chatting jovially. Then moments later one of them lit the candles and spread rose petals in the shape of a heart behind the table. Soon afterward they all hid behind trees or stones or whatever was big enough to keep them unseen. A song was then played, Symphony by Clean Bandit featuring Zara Larsson. But after probably a minute, no one was coming. Then a strong gust of wind almost blew away all of the rose petals. Puzzled by the mishaps, they laughed and worried at the same time, and so did the people around them who were waiting for something special to happen. Moments later, the song was played again, only this time I saw a young couple walking slowly toward the table as their friends were still hiding nearby. After a while it became obvious that the couple were in fact Muslims, with the girl donning a fashionable white head scarf and the man in a neatly tucked white shirt. That moment I was pleasantly struck by Sydney’s embrace of multiculturalism, proving that it lived up to its reputation as a very livable city as it welcomed people from different backgrounds, regardless of their race and religion.

Much to the girl’s surprise, her boyfriend took a small, velvety container in his hands and dropped to one knee. The girl (fortunately) said yes, bringing happiness not only to her boyfriend, but also to their friends and heartened onlookers who clapped, including me. Meanwhile, Sydney’s high-rise buildings were gradually turning on their lights, and so were the Opera House and the Harbour Bridge.

And now your song is on repeat

And I’m dancing on to your heartbeat

And when you’re gone, I feel incomplete

So if you want the truth

I just wanna be part of your symphony

I didn’t have the chance to watch the symphony beneath the lofty ceilings of the Opera House, but Sydney’s own beautiful symphony will forever stay in my mind.

Crossing Paths at One of the World’s Most Beautiful Harbors

Love is in the Air 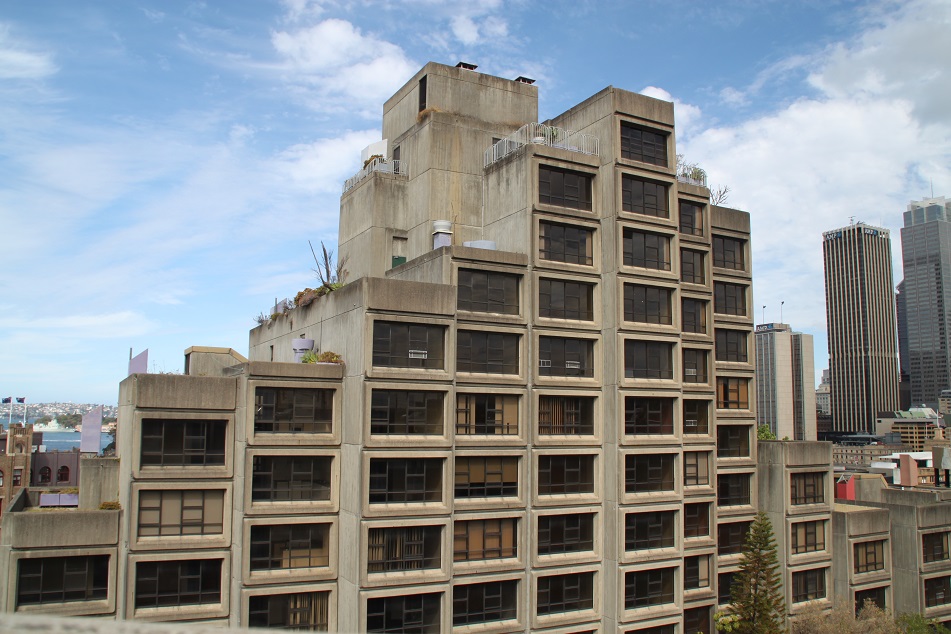 Sirius Building, A Brutalist Apartment Built in the Late 1970s

Reflections of the Afternoon Sun at Darling Harbour

An Australian Magpie Basking in the Sun 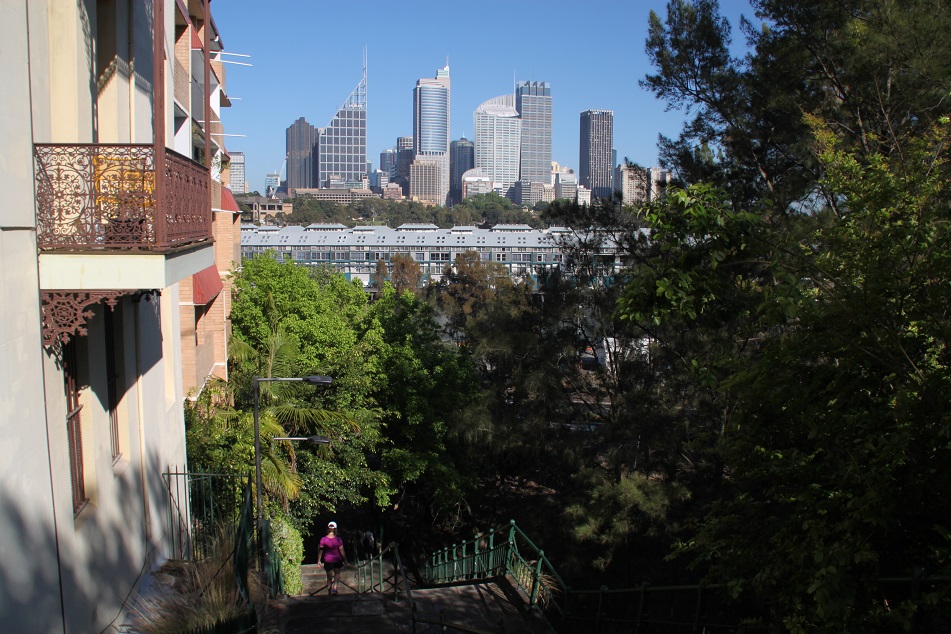 Walking Down the Stairs toward Woolloomooloo from Potts Point

A Romantic Sunset with A Great View 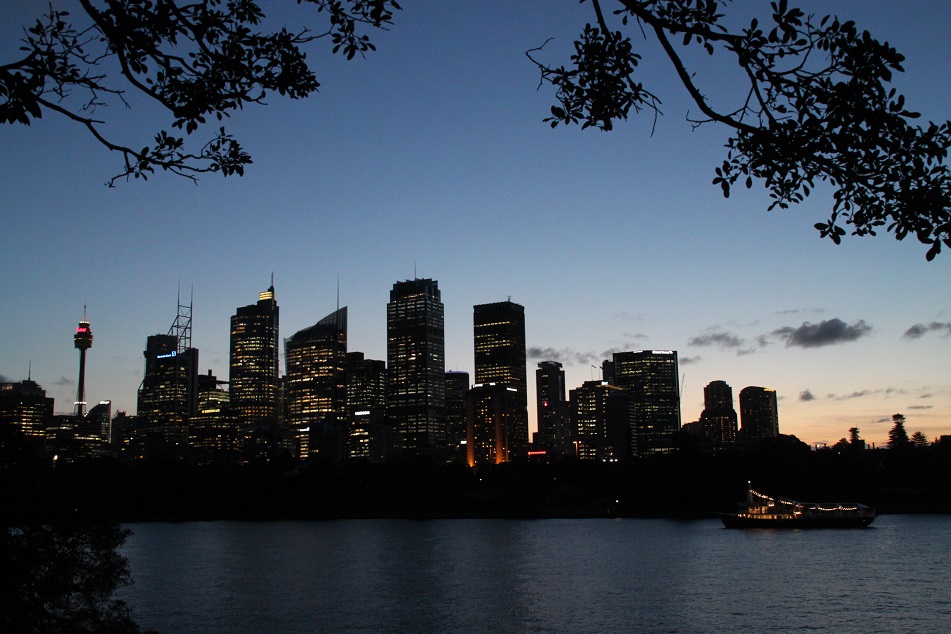 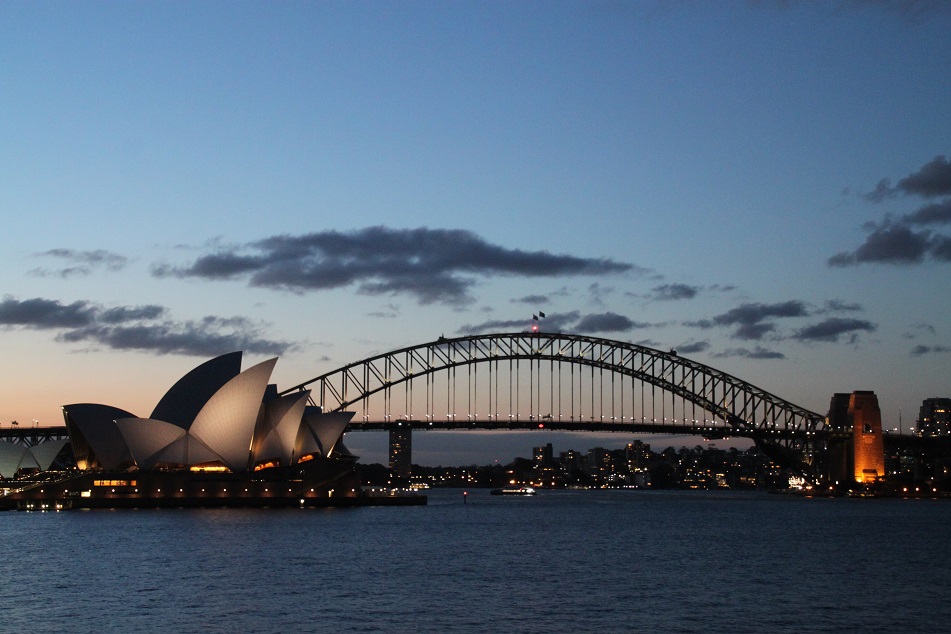 A Sight to Remember