A Reflection of Singapore’s Modernity

The Little Red Dot is a nickname Singaporeans love to use to describe their country: a small but dynamic dot in Southeast Asia. Despite its size (roughly 40% smaller than Rhode Island or 40% bigger than Andorra), Singapore is today among Asia’s leading financial hubs, thanks to its strategic location, world-class infrastructure, clean governance, good connectivity, and perhaps most importantly, kiasuism. Translated as ‘afraid of losing’, the latter is a trait that seems to be shared by many Singaporeans, whether or not they realize or admit it. In spite of the island’s compact land area, Singapore is home to superlatives, including: the world’s best airport, the world’s tallest indoor waterfall, the world’s highest swimming pool, the second most competitive economy in the world, the least corrupt country in Asia, and the list goes on.

To understand the reason behind this obsession for greatness, one needs to go back to the formative years of Singapore. In 1963, Singapore alongside with North Borneo and Sarawak declared independence from the United Kingdom, and together with the Federation of Malaya they formed Malaysia. However, as the new Malay-majority country’s policy was blatantly in favor of the Malays, racially-fueled riots erupted in Chinese-majority Singapore. In 1965, in the absence of Singaporean representatives, the Malaysian Parliament voted unanimously to expel Singapore from the federation.

Against its own will, Singapore became an independent nation. And with hostile neighbors both to its north (Malaysia) and south (Indonesia), there was no other way for Singapore to survive other than by depending on itself. Having a kiasu mentality helped the Singaporeans work harder and smarter than their counterparts in the region to clear their own path toward prosperity. Led by a visionary, albeit oppressive, leader like Lee Kuan Yew who understood how to exploit his country’s strategic geographical position, Singapore leaped forward. Its fast-growing economy made the country become one of the Four Asian Tigers (alongside Hong Kong, Taiwan and South Korea), a prestigious club of the continent’s countries and territories whose economies transformed rapidly just in a matter of decades.

With per capita income significantly higher than its Southeast Asian neighbors, Singapore had to look elsewhere to set the bar higher. Hong Kong, at that time still a British colony, became the benchmark for its similar size with Singapore as well as the former’s prominence as one of Asia’s leading financial centers. With a goal set in mind, the Singaporeans let kiasuism guide them, driving the city-state to eventually become better than Hong Kong. 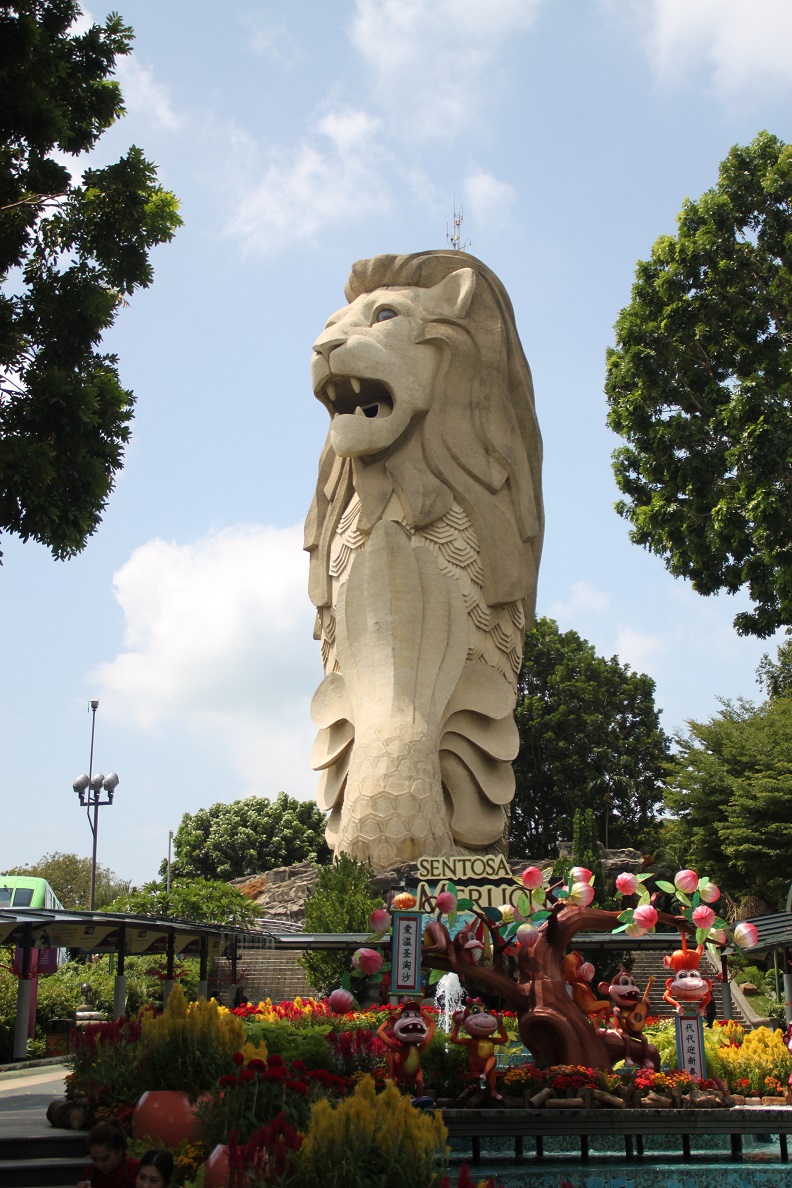 The Merlion on Sentosa Island, the Tallest of All Five Merlions in Singapore 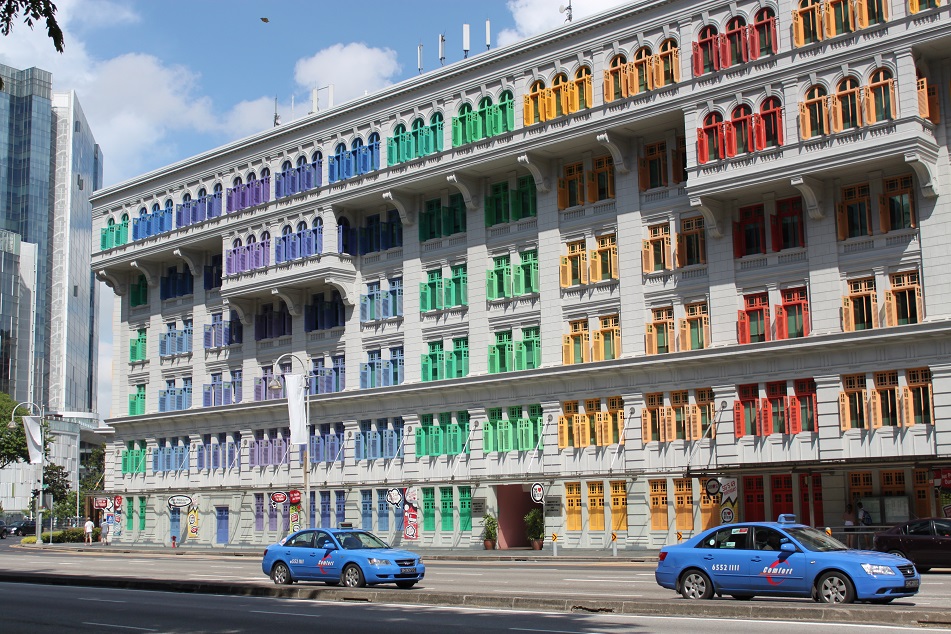 A Peranakan Shophouse at Joo Chiat

In the second decade of the 21st century, the island republic has outperformed the Chinese Special Administrative Region (SAR) in many aspects. At 0.925, Singapore’s Human Development Index (HDI) is higher than Hong Kong’s 0.910. In the 2016 Corruption Perception Index, the Southeast Asian nation ranked seventh, while Hong Kong fifteenth. Singapore’s economy is more competitive than that of Hong Kong (second and ninth places, respectively, in the latest Global Competitiveness Index). And these are not mere numbers as they actually translate into real economic indicators. Total unemployment in Singapore is at 1.9% (with 6.7 youth unemployment), while in Hong Kong it’s 3.4% (15.1% youth unemployment).

Singapore has also been doing a better job at urban planning, preserving its heritage buildings, providing public housing to its citizens, and education. “The English proficiency in Singapore is much higher than in Hong Kong,” James, a native Hong Konger, once attested. On one of my visits to the SAR, I noticed something interesting in the South China Morning Post, Hong Kong’s main English-language newspaper. In an article about Hong Kong’s economy, tables of comparison between the territory and Singapore were strewn all over the paper. Hong Kong, it seems, has embraced the fact that Singapore has caught up with them.

Nevertheless, Hong Kong is still better than its rival in several ways. The MTR – Hong Kong’s mass transport system – is far more reliable than Singapore’s SMRT, with 99.9% punctuality rate compared to Singapore’s less than 90%. Its dramatic natural landscape is clearly something Singapore finds hard to beat, even with the money and collective ambition of all Singaporeans. At a paltry 164 m, Bukit Timah is the highest natural point on the mostly-flat island nation, compared to Hong Kong’s hilly terrain which provides a variety of hiking trails with scenic views. When it comes to press freedom, despite its significant drop in recent years due to the increasing influence from Beijing, Hong Kong ranks 73. Singapore, on the other hand, ingloriously sits at 151 out of 180 countries and territories. The media in the island republic is in fact highly controlled by the government, putting Singapore on par with the likes of Tajikistan, Swaziland and Belarus.

Many Singaporeans, however, don’t seem to be bothered by this. One way or another they support it because security, stability, as well as religious and racial harmony are of utmost importance to keep their economy thriving and livelihood safe. Having a clean and transparent government that is able to provide safety and jobs is good enough. Probably the hustle and bustle, congestion, tensions, flooding, pollution, and all the cacophony of a metropolis less than two hours away by plane to its southeast makes the Singaporeans complacent.

Along the Banks of the Singapore River 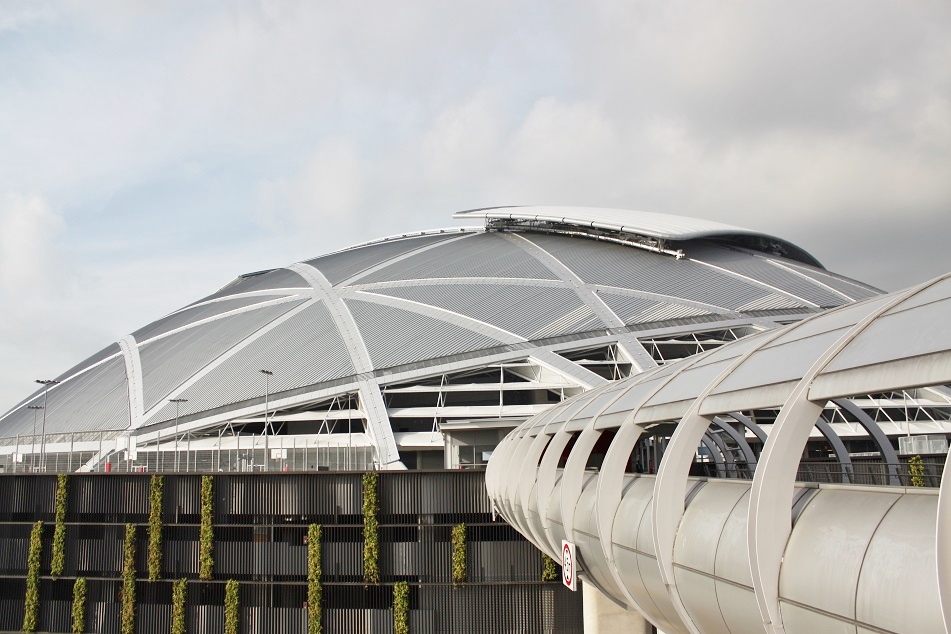 The New National Stadium of Singapore

In the Shade of the Stadium’s Dome

The Equally Modernist MRT Station near the Stadium

Supertree Grove at Gardens by the Bay

Inside Cloud Forest, One of Two Conservatories at Gardens by the Bay 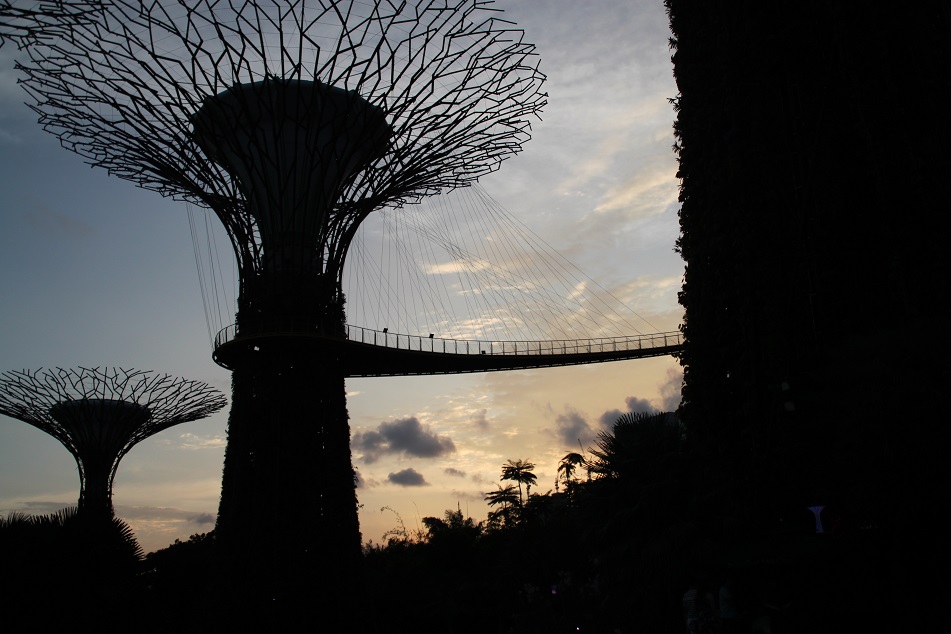 Sunset at the Ultramodern Garden 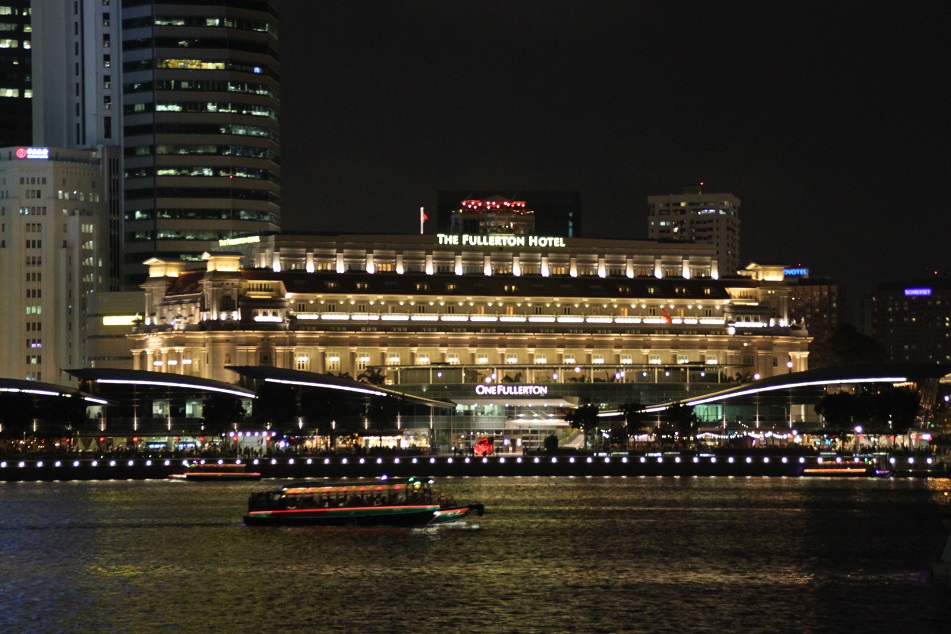 Looking through the Singapore Flyer

51 thoughts on “A Tale of Three Cities: Singapore”