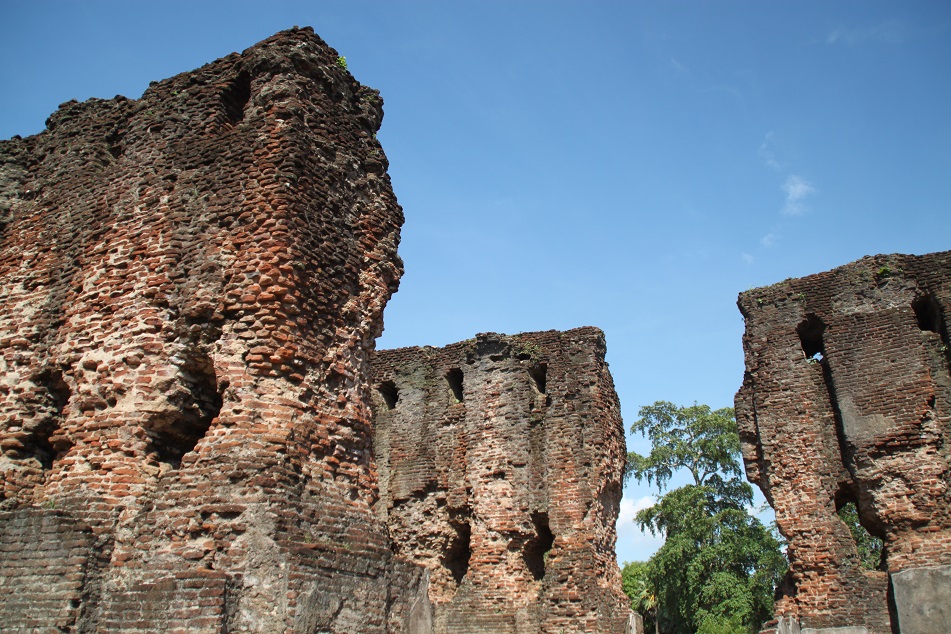 Ruins of the Royal Palace of Polonnaruwa

Across the Bay of Bengal, to the southwest of Narapatisithu’s Bagan, a great king ruled the people on the island of Lanka. Parakramabahu was credited not only for uniting the three Sinhalese kingdoms of Rajarata, Ruhuna and Dakkhinadesa into a unified kingdom of Polonnaruwa in the mid-12th century, but also for the Buddhist monuments, administrative buildings, and a large man-made reservoir he commissioned.

Polonnaruwa was the second oldest kingdom in what is today Sri Lanka, after Anuradhapura which in the early seventh century fell to the Cholas from the land of the Tamils (Tamilakam) in southern India. Rajendra Chola I, son of Rajaraja Chola I who built the magnificent Brihadeeswarar temple in Thanjavur, began a period of Chola occupation of Lanka. It was during this period when the capital of Lanka shifted from Anuradhapura, from which the island had been ruled for more than a millennium, to Polonnaruwa further southeast.

Chola’s rule of Polonnaruwa was marked by the decreasing influence of Buddhism in society and the rise of Hinduism to prominence. One evidence to this was the absence of cow at the moonstones in the new capital due to the animal’s sanctity in Hinduism. Today in many parts of India cow slaughter is either discouraged or banned altogether.

In 1070 a local ruler called Vijayabahu successfully defeated the Cholas in Polonnaruwa and became the first Sinhalese king after more than a century of foreign rule. His reign marked the return of Buddhism as the main religion of the kingdom, and a close alliance with King Anawrahta from Bagan who sent his monks to ordain new monks in Lanka ensured a solid comeback of the teachings of the Buddha on the island.

After Vijayabahu died, small Sinhalese kingdoms emerged. But four decades later a new king, Parakramabahu, ascended the throne and united the Sinhalese people once again. The new king was known for his wisdom in not wasting even a single drop of water from the sky, hence the construction of a large reservoir directly to the west of the center of the kingdom. A new palace was built, as well as a council chamber not far from it, decorated with typical Sinhalese ornaments and symbols. The kingdom thrived. 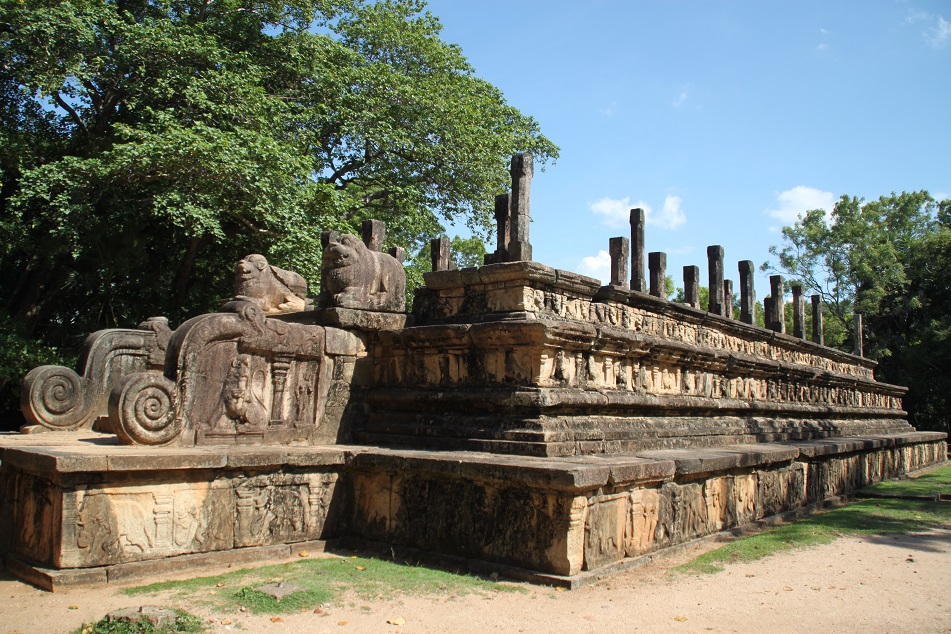 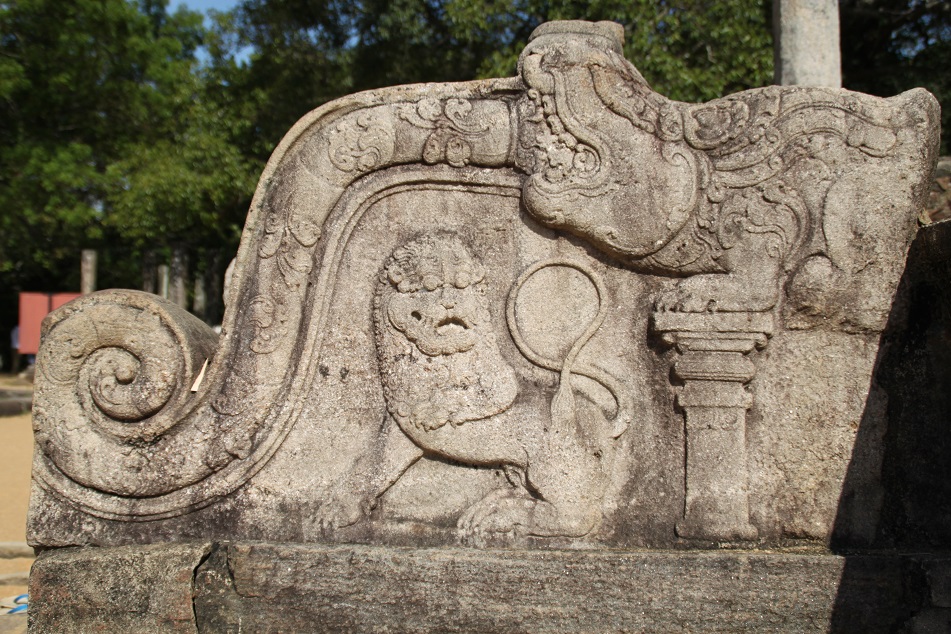 Staircase Decoration at the Council Chamber

Sculpted Pillars at the Council Chamber

Lion, A Symbol of the Sinhalese People

A few hundreds meters to the north of the palace, sat a compound of the most sacred religious buildings constructed during the Polonnaruwa period. Collectively known as the Sacred Quadrangle, today it houses the remains of structures believed to once hold the relics of the Buddha. Built during Vijayabahu’s reign, Atadage is one of the oldest monuments in the quadrangle. Meanwhile, the construction of nearby Hatadage commenced during Parakramabahu’s rule and finished under Nissanka Malla’s, Parakramabahu’s successor who was also responsible for erecting Vatadage, the biggest and most iconic structure in the Sacred Quadrangle.

Outside the main palace complex and the Sacred Quadrangle, two sites are testament to Polonnaruwa’s significance in the past as well as its long history which is still partially enshrouded in mystery.

Gal Vihara is located some 2 km north of the Sacred Quadrangle. Housing four massive rock-hewn statues of the Buddha, this canopy-covered open-air site was filled with pilgrims, mostly wearing white outfit and all barefoot, at the time of our visit. Approximately 3 km to the south of the quadrangle a statue sat in solitude within Potgul Vihara compound. Some people believe it is the statue of Parakramabahu, the great king himself, but some historians disagree for its long beard, mustache, hair style, clothing, and pot belly are not what one would expect from a statue of a venerated king.

In the 13th century Kalinga Magha, a prince from the kingdom of Kalinga in present-day Odisha in India, invaded Lanka and conquered Polonnaruwa. This led to a huge number of Sinhalese people fleeing to the south and west of the island, marking the demise of the kingdom of Polonnaruwa. In the aftermath of the conquest, the Hindu kingdom of Jaffna was established by the foreign prince on the northern part of the island, an important turn of event in Sri Lanka’s history which would indirectly fuel a prolonged civil war in the 20th century.

As the Sinhalese lost their dominance and the Tamils consolidated their grip of power in the northern part of the island, a new king emerged in Bagan. Htilominlo, the new king of the Buddhist empire to the far northeast of Lanka, ascended the throne in a time when the once powerful kingdom began its decline. 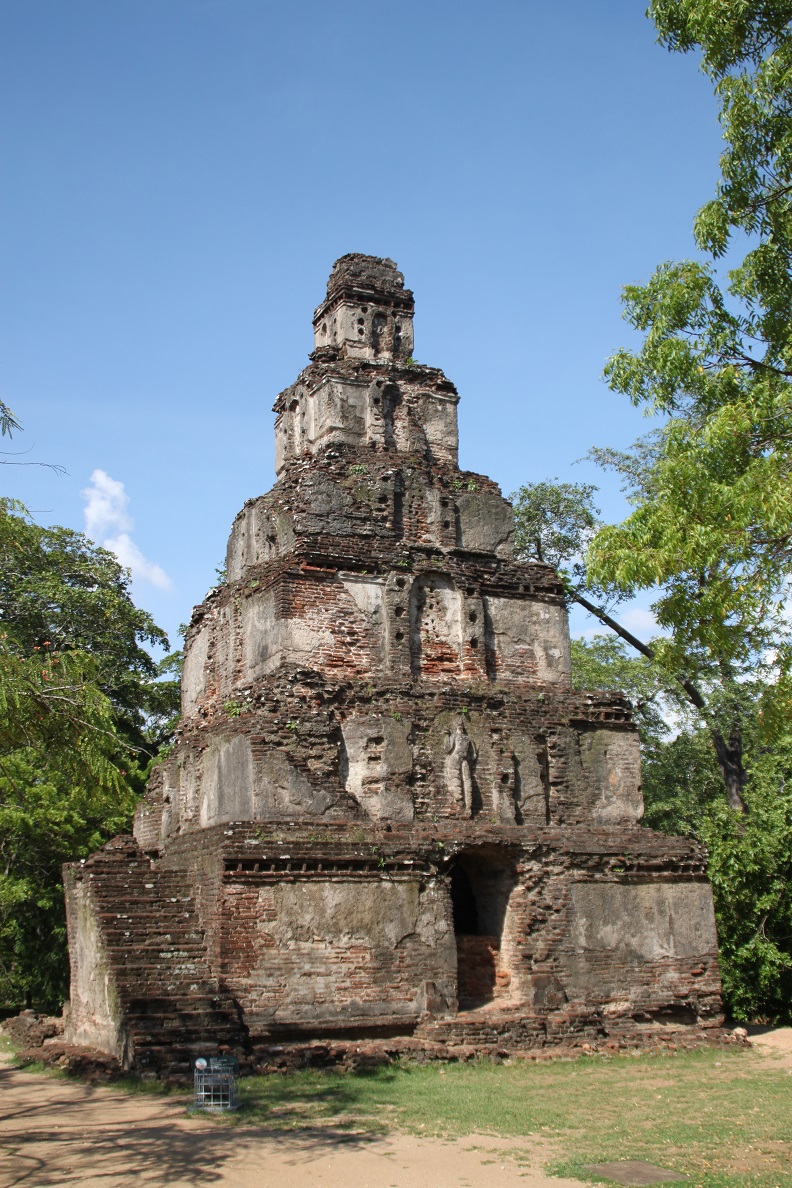 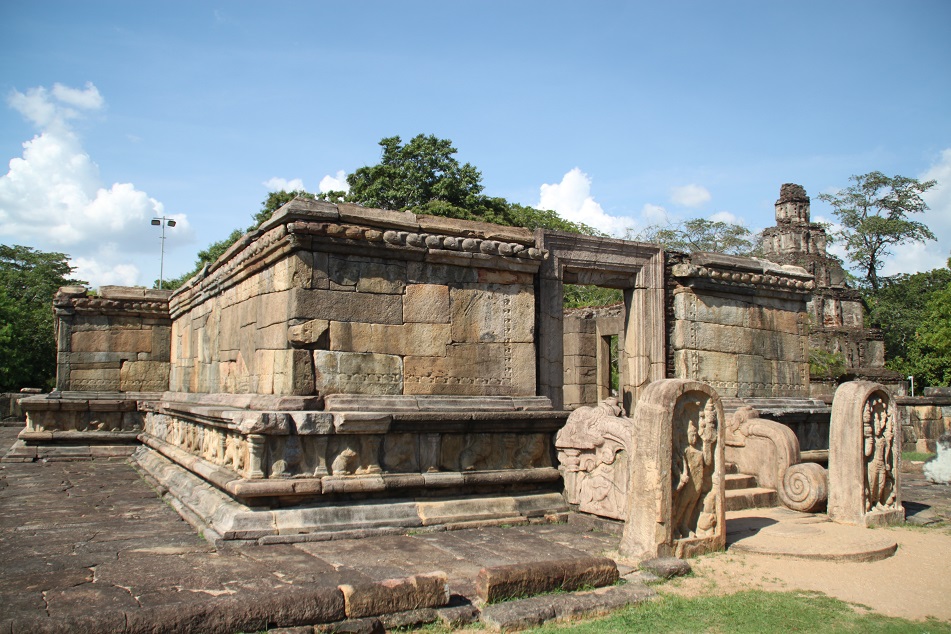 Hatadage, Formerly Housing A Relic of the Buddha

Atadage, Another Sacred Building in the Quadrangle 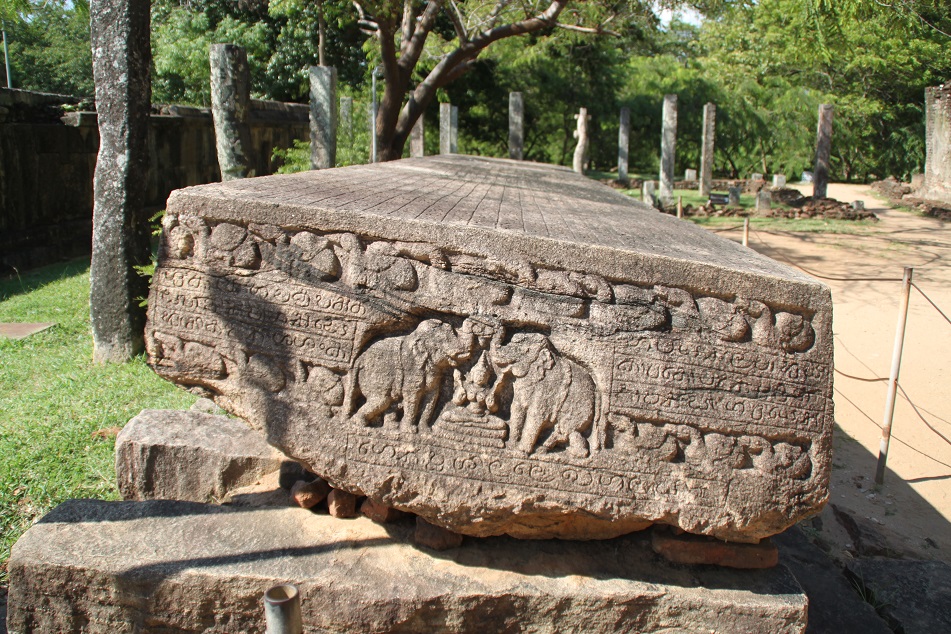 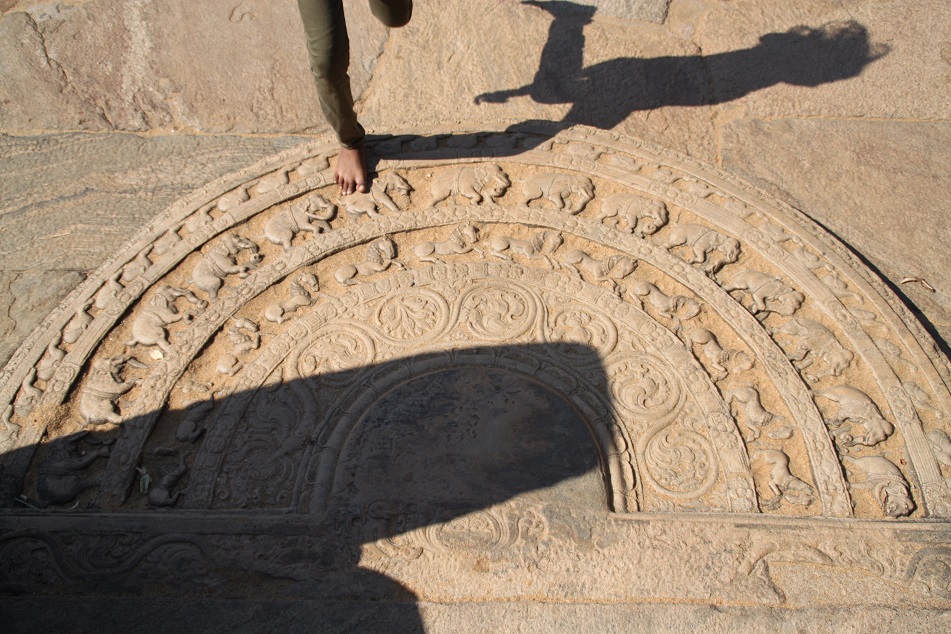 An Enigmatic Statue near Potgul Vihara 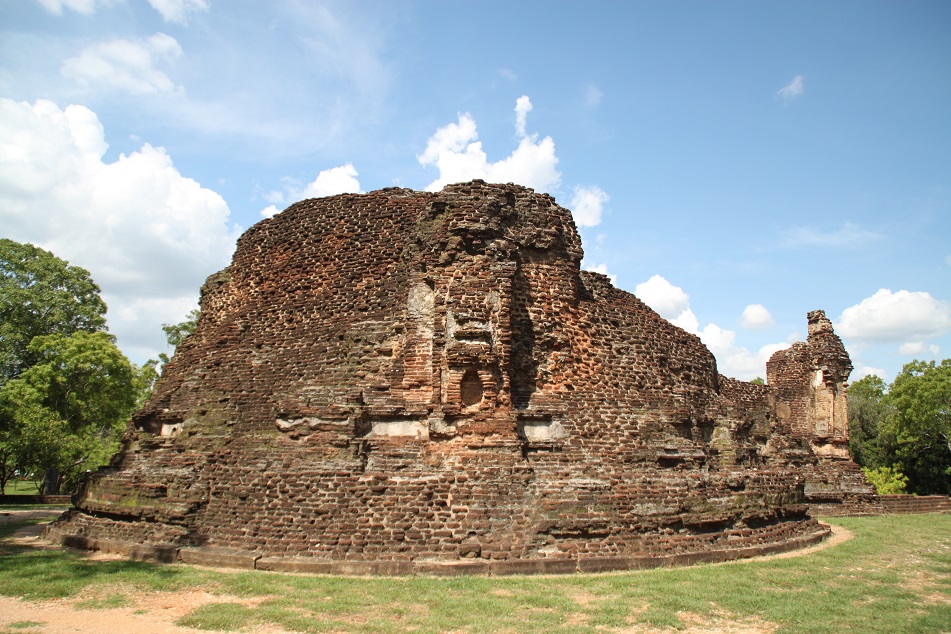 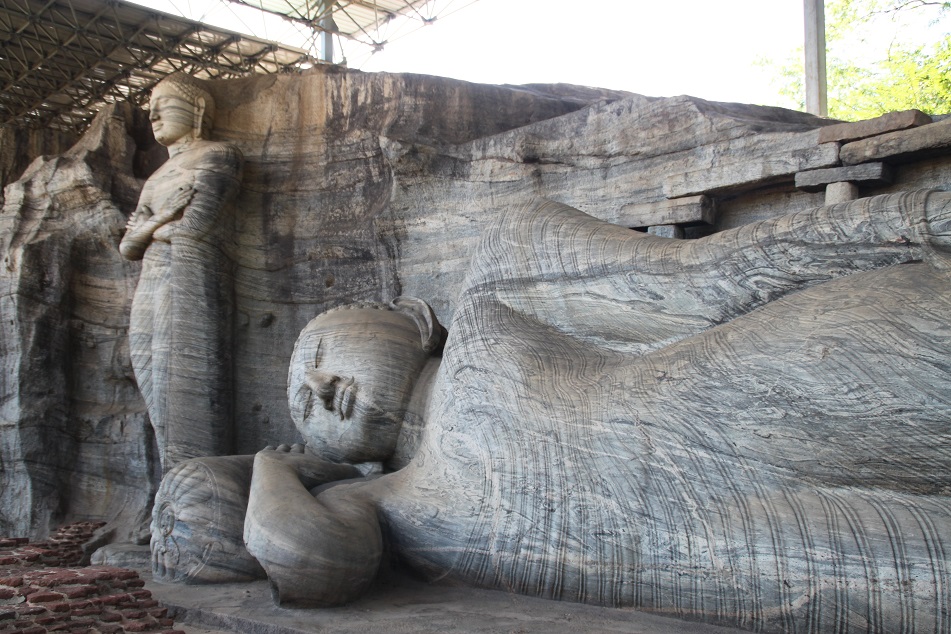 39 thoughts on “The Great Heritage of Polonnaruwa”