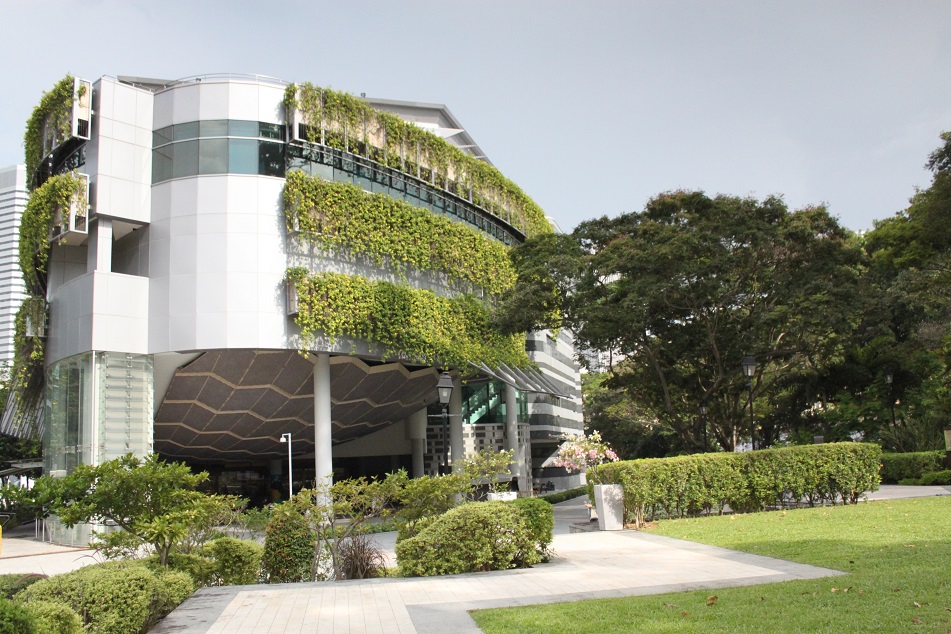 “From the beginning, even before Singapore became independent, we sought to build a world-class living environment here through greenery. At first we aimed to be a “Garden City” – parks, reservoirs, Kallang River cleaned up, Singapore River, later cleaned up… The next phase from being a “Garden City” is to make ourselves into a “City in a Garden”. It is a play on words, but it means something different, because it means connecting our communities and our places and spaces through parks, gardens, streetscapes and skyrise greenery.”

Singapore’s current Prime Minister delivered a clear message of his aspiration to make the small country an even better place to live in, built on the very foundation his father – the late founding father of Singapore, Lee Kuan Yew – had laid, upon which the nation propelled itself from a mere colonial trading port into a rich country whose influence transcends its geographical boundaries.

Home to more than 3,000 hectares of nature reserves, more than half of Singapore’s main island today is covered in green, a significant increase from only a third of the island’s area three decades ago. And that happened to a city-state whose population almost doubled in the same period of time.

Singapore’s vision to be a garden city was conceived by Lee Kuan Yew himself three years after the nation’s reluctant independence from Malaysia, an event Mr. Lee fervently tried to prevent for he believed the Merger with Malaysia was the right thing for the tiny city-state. But had Singapore not been expelled from the union with its neighbor to the north, the story would have been much different today.

Surrounding, and inside, the city’s downtown are numerous parks providing not only shelter and convenient jogging tracks, but also open air museums, home to some of the most significant historical sites on the island. Fort Canning Hill, once known as Bukit Larangan – forbidden hill in Malay – for its strictly royal-family-only premises, sits right at the heart of Singapore’s business and shopping districts.

Excavation works uncovered precious artifacts buried on the hill, believed to be those of Malacca Sultanate’s. The artifacts now find a new home at the National Museum of Singapore, but one relic from the time of the sultanate still baffles historians today: the tomb of Sultan Iskandar Shah, the last king of Singapura before the Java-based kingdom of Majapahit took the island by storm. Today a lone tomb, resting at a shaded pavilion under tall, old trees bears the marking ‘Keramat Sultan Iskandar Shah’, or the tomb of Sultan Iskandar Shah, in spite of theories that he was buried either in Malacca or near Port Dickson, both in Peninsular Malaysia.

When Stamford Raffles came to Singapore in the early 19th century, he commissioned the construction of the British governor’s residence as well as the island’s first botanical garden on the hill – no other nation, it seems, is as passionate as the British when it comes to botanical gardens. In the following decades a fort was built in response to the perceived growing threat to the British colonial rule on the island. The park now protects what is left from the time the European power gripped a full control of the island.

A Faux Tomb of Sultan Iskandar Shah, the Ruler of Singapura in the 14th Century 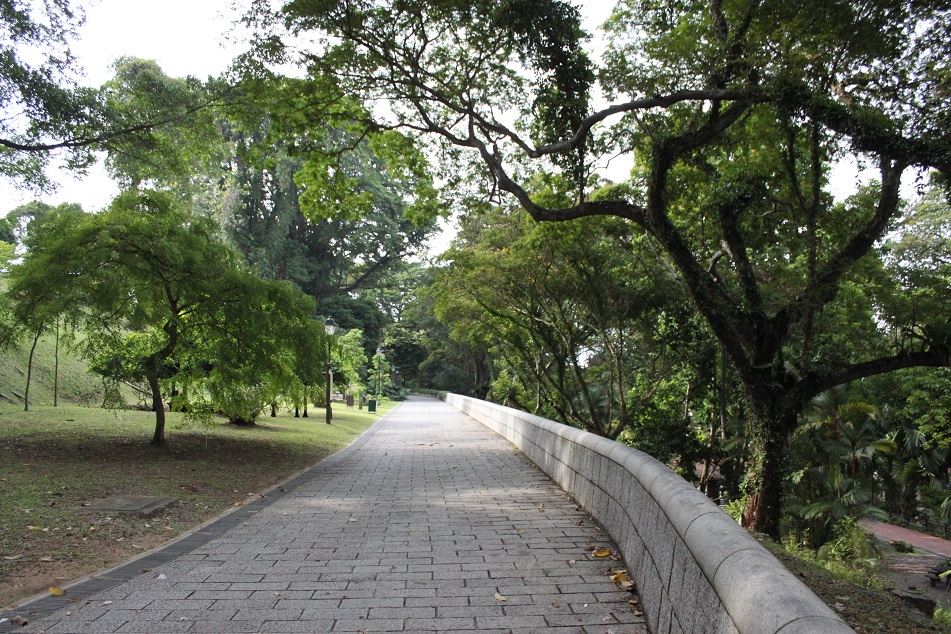 However there is no other garden in the city which can quite measure up to the sheer size of the modern architecture wonder that is Gardens by the Bay.

Constructed over a 101-hectare piece of land to the south of Singapore’s iconic waterfront at Marina Bay, the $829 million artificial gardens become the nation’s most prominent icon for its aspiration to become truly a city in a garden. Designed by an international architecture firm, two massive columnless glass conservatories are the highlights of the mega-project. Dubbed the Flower Dome and the Cloud Forest, each replicates the warm and dry Mediterranean climate and the cool and humid tropical montane forest respectively.

As James and I stepped inside the Cloud Forest, an impressive wall covered in lush green vegetation and colorful blossoms towered under the arched curves of the glass dome. Acting like a curtain were the awe-inspiring waterfalls coming down from multiple levels of the artificial wall, or ‘mountain’. The cool air, and the minuscule droplets from the waterfalls, brushed against my face, a refreshing break from the tropical heat and humidity outside.

The multi-tiered mountain hosts different display themes, from replicas of stalagmites to walkways around a wall festooned with wild orchids and a plethora of other colors. A glance out through the glass, Singapore’s skyscrapers rose above the river under the midday sun. Impressive was an understatement.

As we walked through the last hanging walkway before descending to the bottom of the artificial forest, mist started wafting from the bridge’s sides, bringing moisture to the air to keep the plants green and alive.

At the forest’s floor, I couldn’t help looking up towards the 42 m mountain – a bizarre yet astounding centerpiece of the glass-encapsulated man-made wonder.

Artificial Waterfalls at the Cloud Forest, Gardens by the Bay 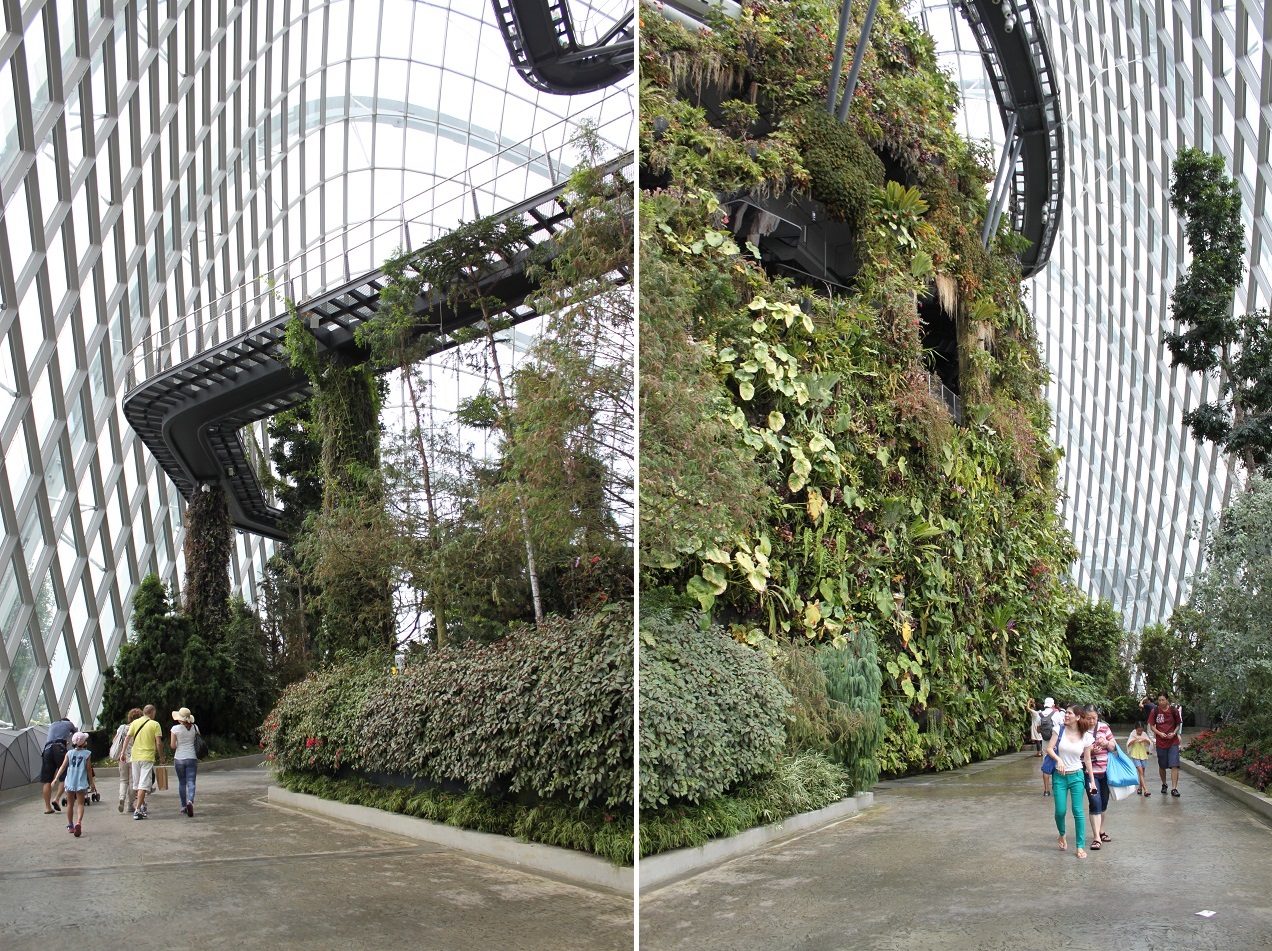 Inside the Cloud Forest

A Decorative Sculpture from Timor-Leste

Humor in the Man-made Environment 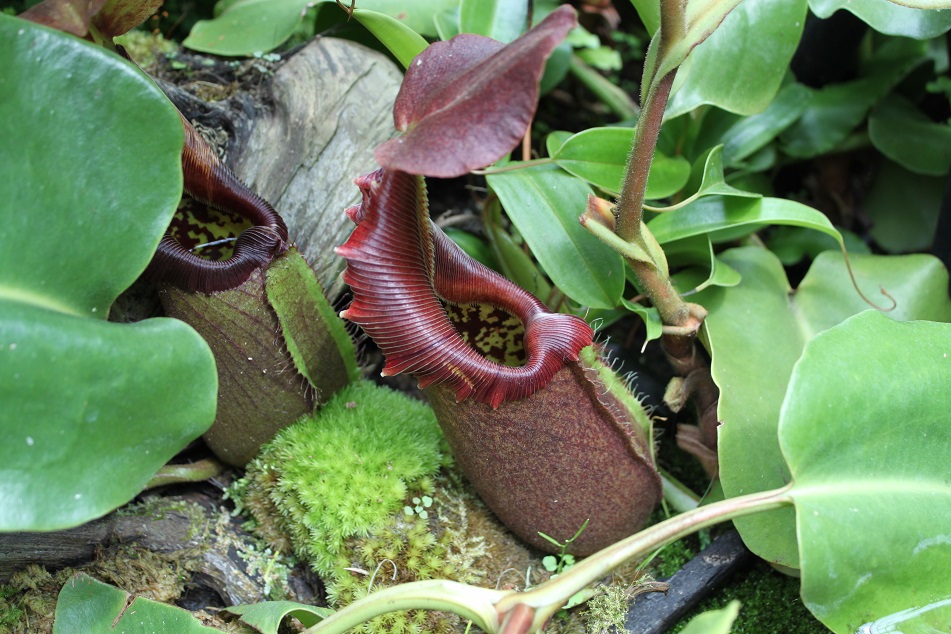 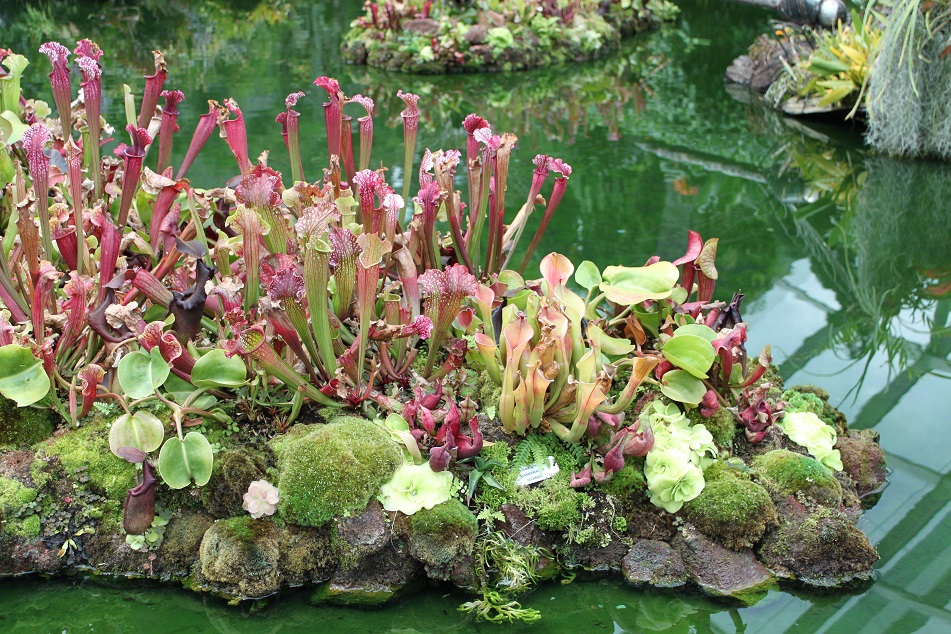 A Wall of Montane Forest 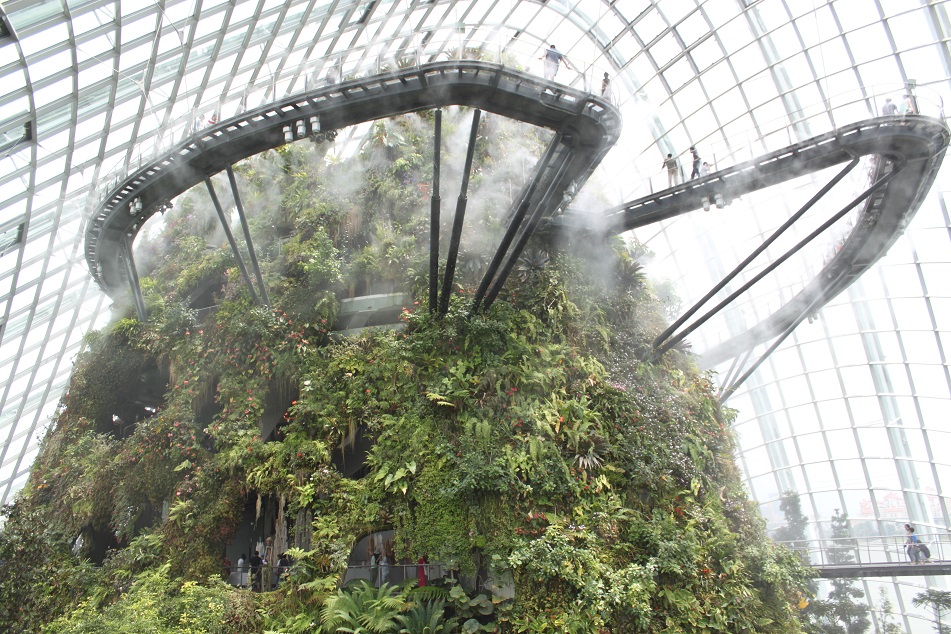 Maintaining Moisture inside the Dome

As though the conservatories were not mind-blowing enough, there was the Supertree Grove – a group of giant tree-like structures covered in vines and flowers – measuring between 25 m to 50 m in height. As the night fell, lights in a myriad of colors painted the colossal trees, bringing the magical landscape of Pandora from James Cameron’s Avatar to life.

Set against the pretentious backdrop that is Marina Bay Sands, Supertree Grove not only is Singapore’s spirit of kiasuism at display, but also a manifestation of the tiny nation’s dream and ambition to inspire. Photovoltaic panels atop the trees provide power to light up the structures when night falls; cleverly-designed tree canopies collect rainwater for irrigation within the gardens; their overall gigantic size acts as the conservatories’ cooling system. Any Na’vi would certainly be proud of these environmentally-friendly structures.

However I didn’t hear anyone speaking Na’vi that night, nor did I see any ikrans scouring the overcast sky, the Hallelujah Mountains, too, were nonexistent. Only the evocative tunes of a great light and sound performance, a rhapsody of crimson, turquoise, teal, and violet, under the grey skies at eventide. An overture to the the majestic gardens’ lullaby, an engineering feat made to dream and inspire. 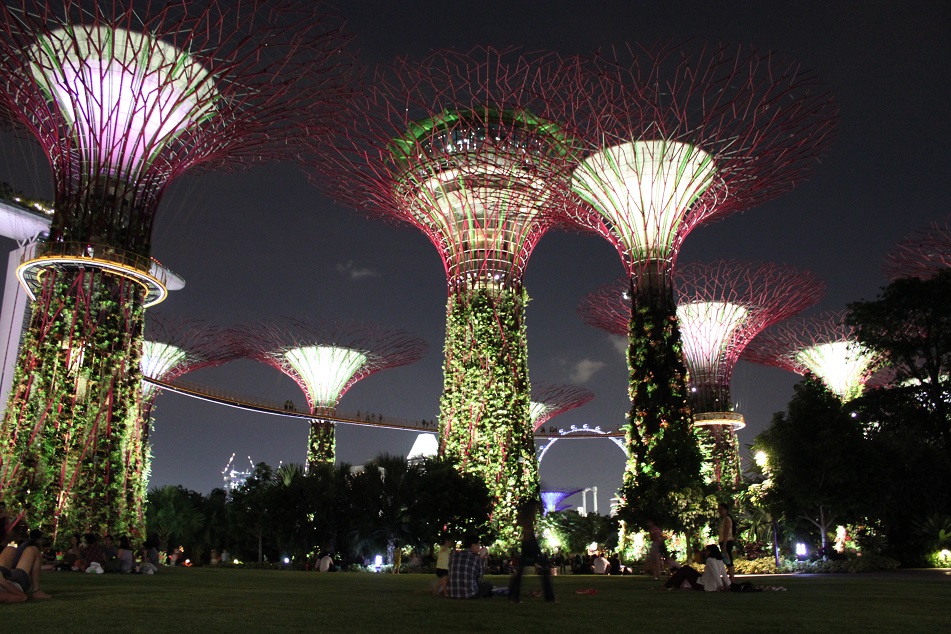 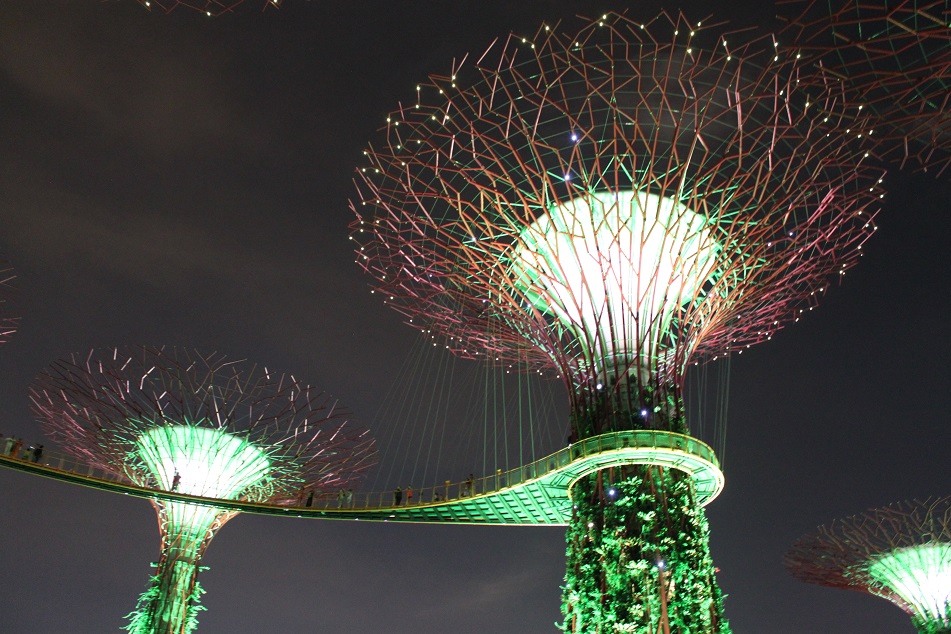 Hanging Walkway, 22 m above the Ground

108 thoughts on “Creating A City in A Garden”