We only had 3 hours left before we had to be at the airport in Bali to catch the flight back to Jakarta. But after watching the Barong performance at Batubulan and having visited some of eastern Bali’s most picturesque palaces, gardens and temples we ran out of idea.

“Where else do you want to go?” our driver, Bli Komang, asked us while driving his car southward to the airport.

“What’s close from here?” I asked him back, since I could only think of places too far from where we were.

He paused for a moment.

“I know a place you will like,” he replied confidently.

He then drove his car through small streets around Batubulan – jalan tikus or rat’s track as Indonesians call such network of twisted narrow streets for avoiding traffic congestion on major roads. Bli Komang has been working as a driver for years and the Barong performance at Batubulan is one of the most prominent sites for culture-oriented tourists who wish to watch authentic, albeit having been modified to suit a greater audience, Balinese traditional dances. A place he is very familiar with.

Minutes after navigating through Batubulan’s jalan tikus he finally arrived at a quiet intersection, with only a handful of cars passing by, then parked his car at an open space near a compound which seemed to be a small pura (Balinese Hindu temple).

“I noticed you like taking photos of carving details, so I think you may be interested in this pura.”

As we stepped out of the car it became obvious that it was unlike any pura we had visited before. Two rows of meticulously carved stone panels adorned the outer wall of the pura compound, each richly engraved with symmetrical and intricate floral patterns. Near the candi bentar – the split gate – figurines of a mystical fanged elephant embellished the corners, greeting us with a petrified grimace. 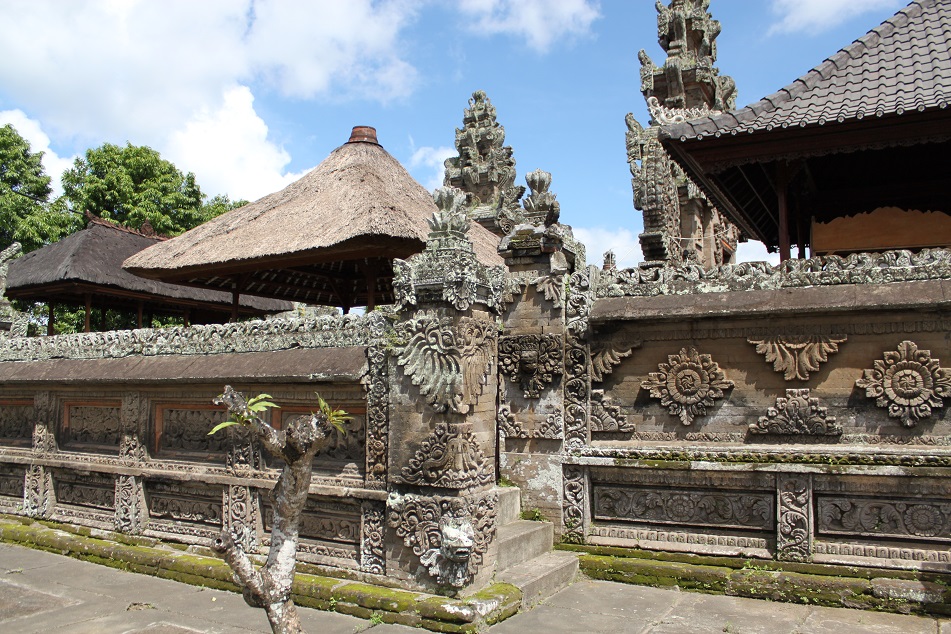 The Outer Wall of the Pura 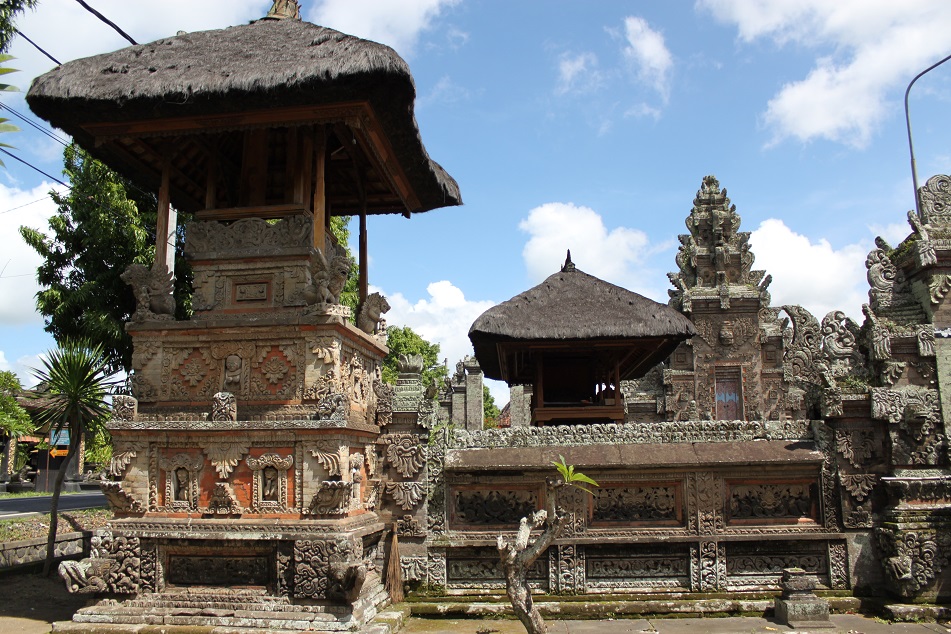 Such An Amazing Craftsmanship

The village of Batubulan not only is known for its Barong dance, but also for its stone carving industry. In the meantime the neighboring village where Bli Komang took us, Singapadu, seemed to have a fair share of its own excellent carvers. Earlier that day he explained to us that schoolchildren in Bali had to choose from four kinds of traditional arts to learn about: painting, dance, decorative sculpture, and carving statues. Hence the rich and lively artistic landscapes on the island, creating unrivaled cultural sights among the Indonesian sprawling archipelago.

As soon as we entered the courtyard it was apparent that the pura was not known to tourists. No ticket booth, no guard, not even a single donation box was spotted. However the silence was soon broken by the sound of our camera shutters as we started taking hundreds of images of the beautifully embellished pura. Bli Komang, meanwhile, walked to a corner of the temple grounds and approached an old man who was sweeping the inner courtyard.

A few minutes later he came back to us. “He’s my uncle,” Bli Komang said with a big grin.

“He’s the caretaker of this pura.”

Then he elaborated on the temple itself.

“You see those detailed carvings? You can’t find them in newer temples because the cost to make one is too expensive now.” His words was a nod to my previous observations on some of the island’s newer temples which were missing the detailed floral patterns on their walls and candi bentar, although still retaining the iconic Balinese temple outlines, hence their identity.

Bli Komang himself used to work as a sculptor before he decided to become a driver, thanks to Bali’s thriving tourism industry and the lack of decent public transport on the island which create strong demand for the job to shuttle visitors from one place to another. But he is not the only one who left their old job as a sculptor as he was just following the trend – where the money went. That alone has contributed to the steep increase of cost to build a pura with richly intricate stone carvings, on top of the country’s annual inflation rate, leaving Pura Singapadu as one of the last Balinese Hindu temples built in such a unique architecture style with decorations newer temples can only envy. 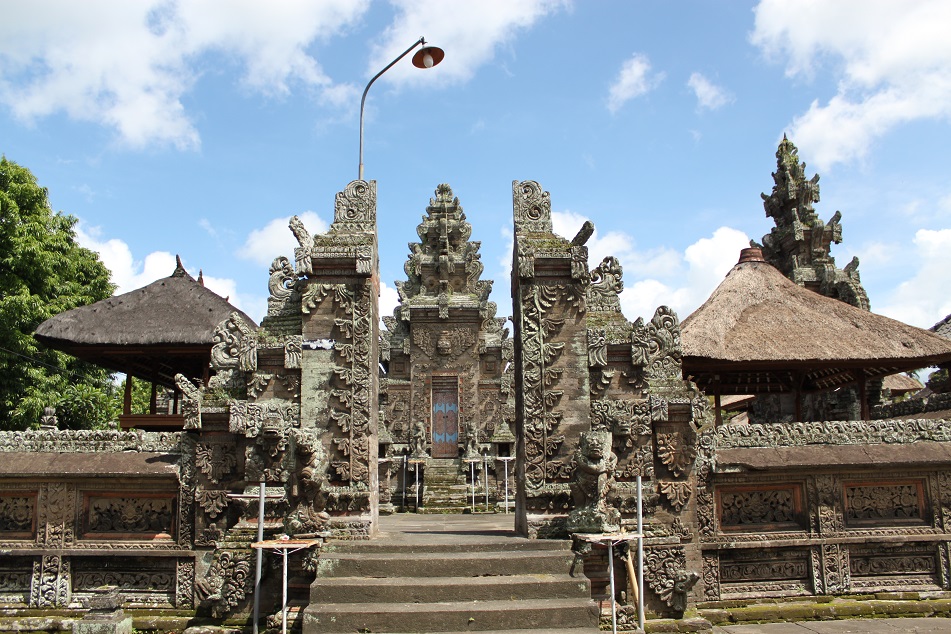 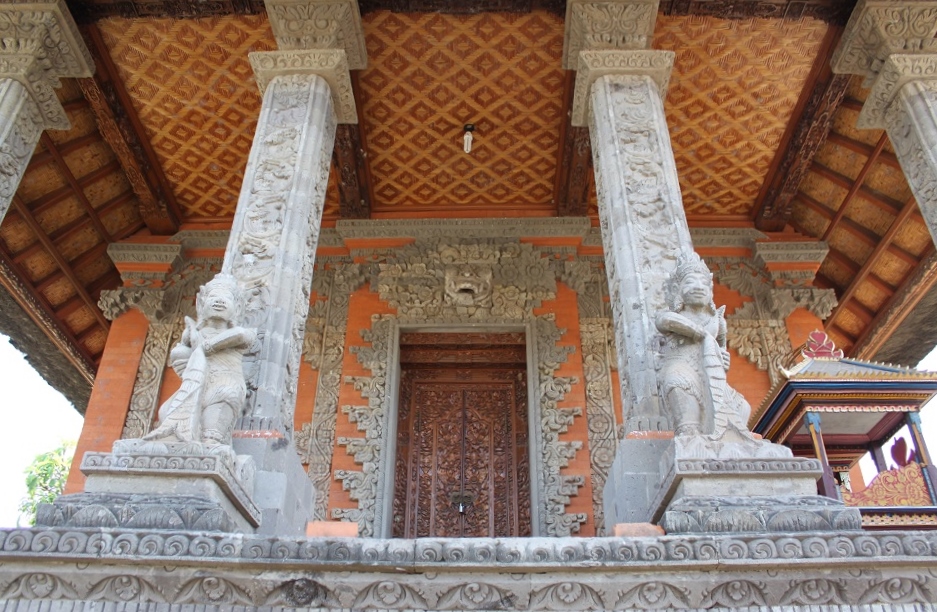 A Pavilion at the Temple’s Courtyard

No Doors and Roofs are Left Unadorned

Floral Patterns behind the Outer Wall

A Creature from Balinese Hindu Mythology 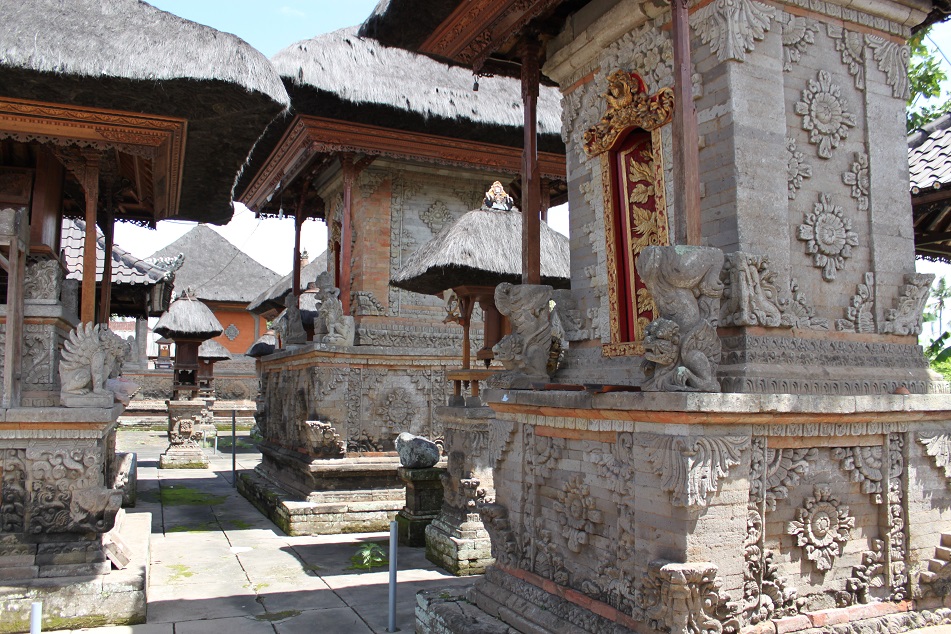