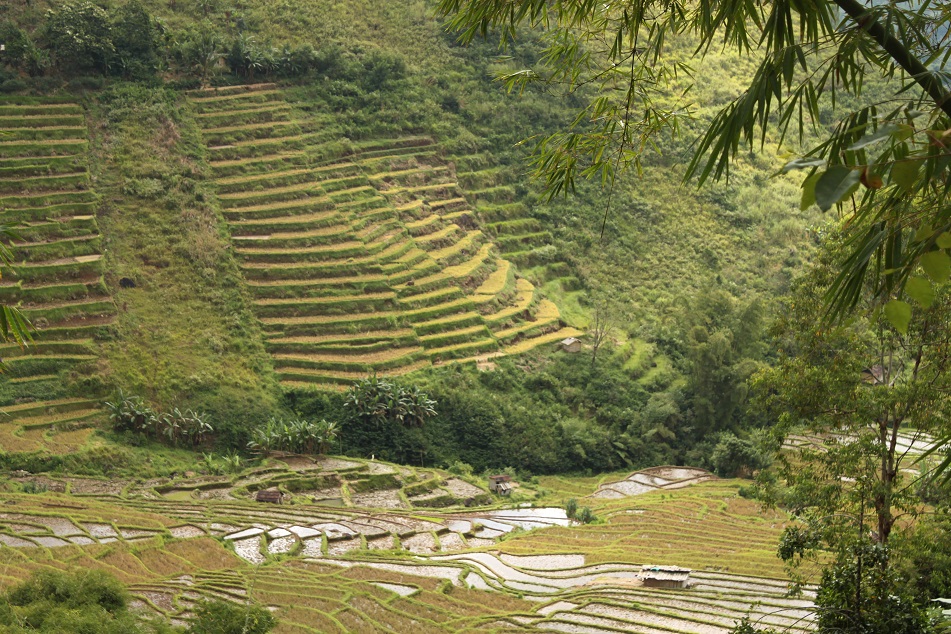 The Majestic Rice Terraces of Manggarai

Amid the woods just outside the town of Ruteng in western Flores, a village was hidden from plain sight where dirt trails provided the sole telltale of a settlement behind the trees. Children were playing at the village entrance as we drew closer and walked down a path leading to the central courtyard with an elevated circular ground on which a dadap tree (Erythrina variegata) grew. Two large traditional houses stood across the point where we entered the village, capped by conical roofs made from alang-alang – dried reed.

We were at Ruteng Pu’u, the oldest village in the area and the forerunner of the modern-day Ruteng.

A closer inspection to one of the traditional houses revealed typical scenes of a Florenese village: dried coffee beans spread out on a tampah – wide basket made from dried bamboo – in front of the house, while dried fish hanging from a wooden window, probably salted.

“This is called rumah gendang,” Dino explained and added, “named after the gendang or drum inside each house.” Hence the English name, drum house.

“I want you to meet the local chief who can explain further about the features of the house and the philosophy behind it.”

“But it seems like he’s not home. We’re not lucky,” Dino said after taking a glimpse inside the house.

I was taking photos of a kemangi – lemon basil – shrub in front of the house before getting ready to leave the village as Dino was signaling us to do so. But he took one final glimpse into the house before leaving, and suddenly grinned.

An old man wearing a brown turban studded with traditional motifs emerged from the house and greeted us. He then asked us to come in and pointed at a mat to our left side, the seating area for guests. He sat right at the center of the drum house, leaning to a large tree trunk hung with a paraphernalia of ceremonial tools.

“It’s called tiang tengah,” Dino told us and explained that tiang tengah – central pillar – could be found only in village chiefs’ houses.

“You can ask him anything,” Dino assured us to talk to the old man whose calm demeanor reminded me of that of a royal descent’s.

Soon, a young girl came out of the kitchen and brought small glasses filled with black and fragrant liquid. It was the fabled Florenese coffee, made from coffee beans of Manggarai, one of the most prolific regions in Flores producing anything from coffee to rice. “She’s my granddaughter,” the chief explained.

Slightly intimidated by the well-mannered leader of the village I started asking questions, ranging from the history of Ruteng Pu’u to the unique features of rumah gendang to more personal questions about his family. It was the photographs of modern young people and an Australian flag hung on the wall behind us that gave me the urge to do the latter.

Wearing a fading black suit embellished with colorful patterns, he responded to my questions in a soft-spoken Bahasa Indonesia. His reddened teeth and gum were exposed as he spoke, a hint of his penchant for chewing betel nut and leaves, a favorite pastime activity shared by many people on the island.

“You know, it was no coincidence that our ancestors chose this location to build a village. One morning they found stone walls encircling this plot of land. No human could have done that, hence they thought this place was special,” he started his story about the village while asking us to drink the coffee.

One sip of the coffee was all it took to make me, a devoted tea person, to fall in love with Florenese coffee for its smooth and strong flavor, sweetened with just the right amount of sugar, and a clean fresh end. I was distracted for a while from the old man.

“To carry this tiang tengah from the forest was not easy. We had to hold a sacrificial ritual at the location where we wanted to cut down a tree. Then the log must not be carried by any means of transportation. Men carried it with two women sitting at both ends of the log. Once it arrived in the village we had to hold another [sacrificial] ritual.”

Rice Terraces on the Undulating Hills of Manggarai

The Village of Ruteng Pu’u 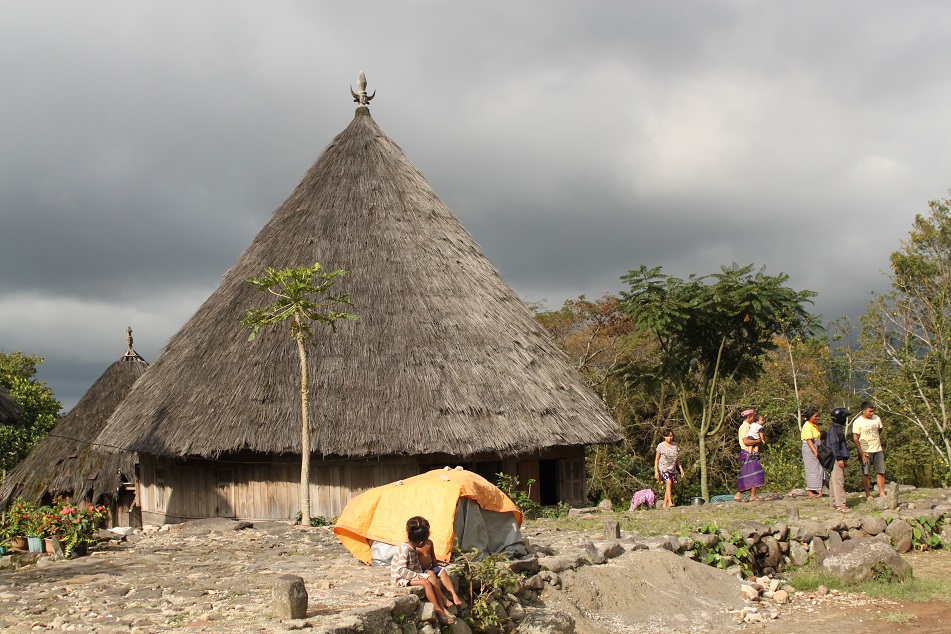 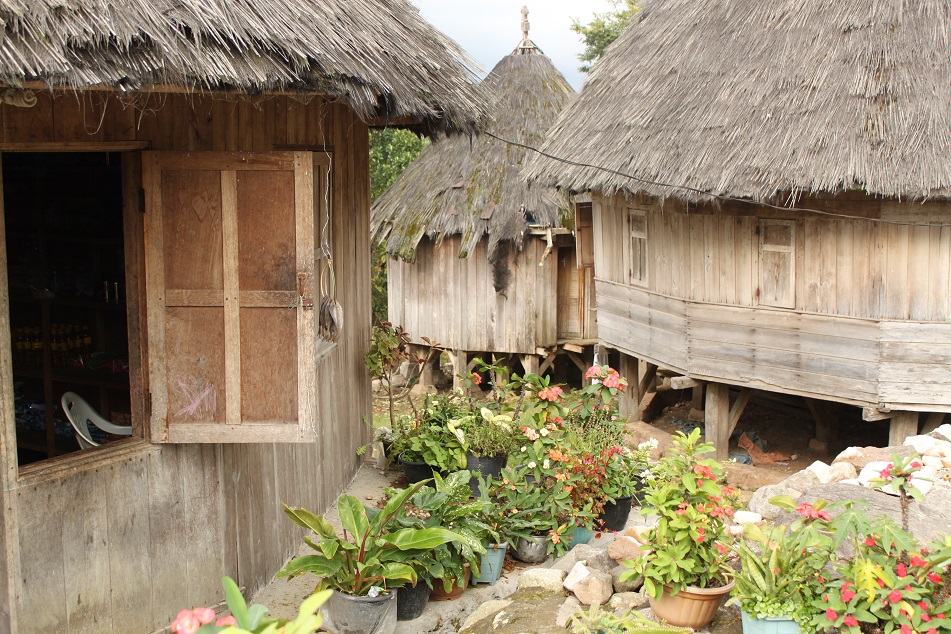 Potted Plants around the Houses

Coffee Beans Drying Under the Sun

Mounted on tiang tengah, just above the chief’s head, were items used for traditional rituals and ceremonies, including a medium-sized drum, a gong, a chicken wing with its feather still attached to the dried carcass, a gourd for holding tuak, and deer antlers.

As the old man continued describing the rituals and traditional ceremonies they hold from time to time, it was obvious how, like in other parts of the island, many Florenese practiced Catholicism with a hefty dose of animism.

“Whenever we have nightmares we must give offerings to our ancestors the next day. If we don’t do that we would get sick.”

“Before a ceremony is held, it is obligatory to also give offerings. Otherwise there wouldn’t be any guests coming, or the food we serve would smell awful.”

“During harvest season, we must give offerings to prevent us from losing what we harvest.”

Yet, the chief’s house was laden with white painted crosses and images of the Virgin Mary.

When he came to the explanation about their agricultural system, he pointed up to the rafters. I followed his finger and saw a pattern created by the manner the rafters were put together: small to big rings of wooden beams supporting the alang-alang roof.

“That’s how we divide our rice fields,” the chief said.

Manggarai people have a unique way of dividing rice fields among family members for cultivation. The following day Dino took us to the village of Cancar where spans of spider web fields were spread out on a vast plain surrounded by verdant hills. A spider web field is called lingko, while the plots of land inside a lingko is called randang or lodhok.

Rituals are always performed at the center of lingko, the only piece of land inside a lingko belonging to the entire family group or clan instead of to just one family. The more members a clan has, the more lodhok their lingko has.

A strong communal spirit is shown in this unique agricultural system as lodhoks are cultivated in different times throughout the year with plants varying from normal rice, red rice, brown rice, and even vegetables. In addition to selling the produce at the market, they also exchange what they harvest with what others do over an agreed quantity without having to spend money at all. The oldest means of trade is still practiced in this part of the world.

However Manggarai is not only known for its unique spider web fields, but less known to outsiders the region has rice terraces more magnificent and expansive than the ones in Bali. The rolling hills of Kilolima were carved right from the top down to the bottom to create a picturesque view of undulating, endless natural staircases.

All were made out of necessity to provide subsistence for the locals.

Necessity was also the main drive for the chief’s children to leave his secluded drumhouse and find their ways to cities in Java, including Jakarta and Malang.

“But they always come home whenever there is a ceremony,” the chief told us. “I want them to be buried in Ruteng when they die.”

His words spoke for the spirit of Manggarai people, adamant to preserve their old traditions despite the introduction of Catholicism and modernity. On the fertile soils of Manggarai they were born, to the same land they will rest eternally one day. 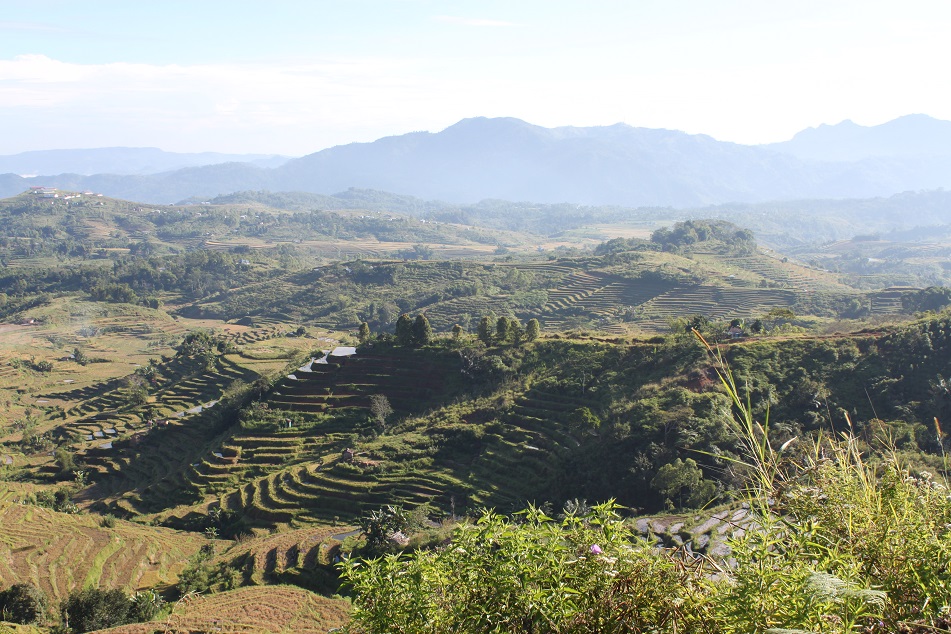 The Expansive Rice Terraces at Kilolima, on the Way to Reo 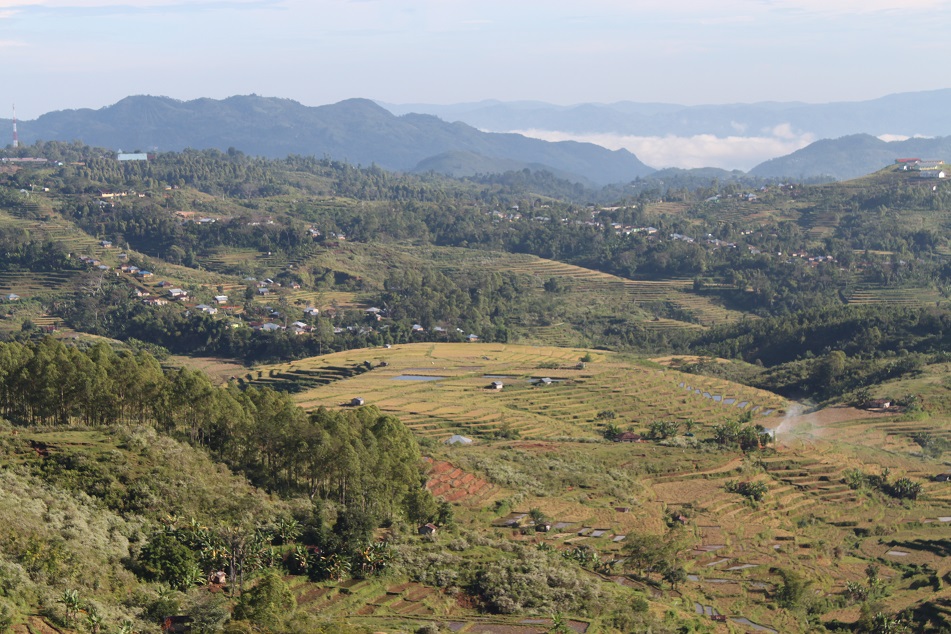 Rice Terraces As Far As the Eyes Can See 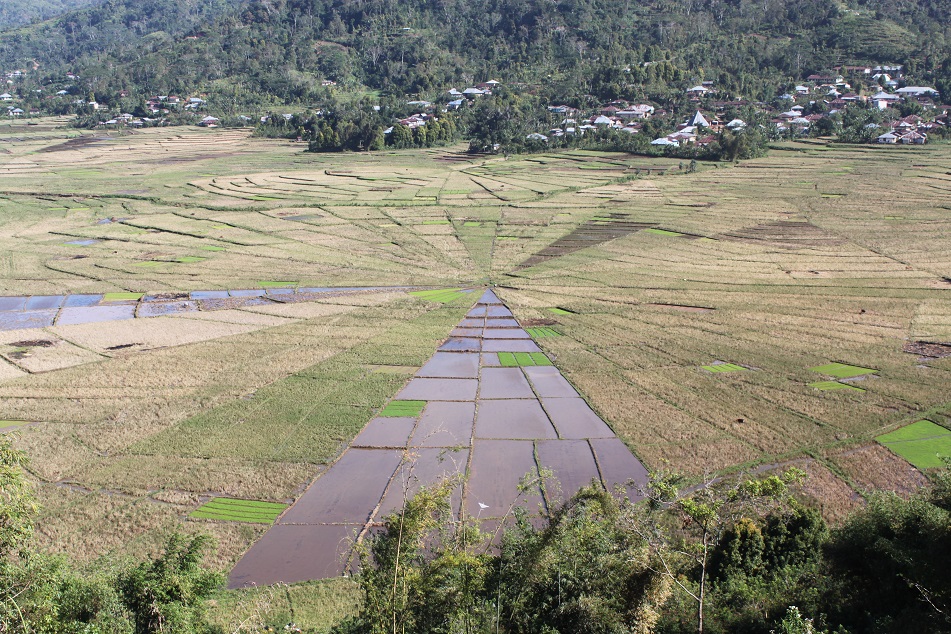 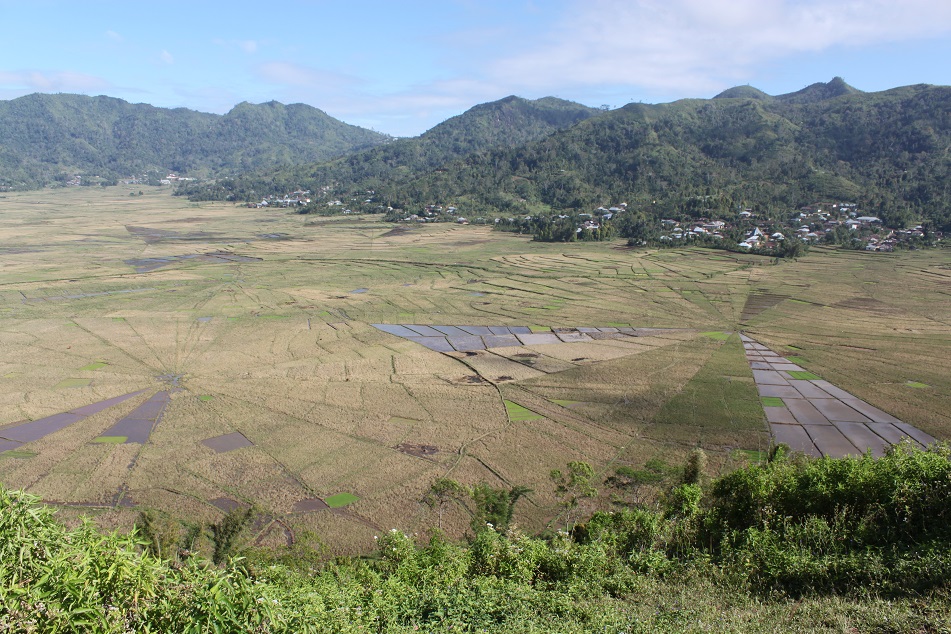 42 thoughts on “Manggarai: Life in The Land of Abundance”