A Village Hidden in the Fog

Leaving Ende with its mountains and blue pebble beaches we continued our journey westward to Bajawa, the capital of Ngada Regency on the island of Flores. Situated on the slopes of Mount Inerie with its near-perfect cone, the temperate climate of the town made it a nice and comfortable place to escape the humidity of the lowlands. But James and I didn’t go to Bajawa for that, rather we were intrigued by the Ngadanese traditional villages where people still practiced animist belief with touches of Catholicism.

“Catholicism only came to these villages in 1978,” Dino said to us. “That’s why on Sundays the locals go the church but at the same time they remain practicing traditional rituals involving animal sacrifices.”

“There are a lot of traditional villages around Bajawa. Bena, Wogo, Gurusina, Belaraghi, and many more. But we are going to visit only two. First we go to Wogo, then we’ll visit Bena.”

“In Bena you will see houses with male and female symbols, but in Wogo the symbols are inside the house,” Dino further illustrated, trying to give us an idea of what we would see later that day.

After hours of navigating Trans-Flores highway’s long and sharp turns, we were minutes away from Wogo, our first village. As we approached the village fog started to fall, thin and vague at first but soon it became very thick, significantly reducing our visibility to only a few meters. Dino started to have doubts.

“The fog is very thick, should we continue to Wogo?”

Moments later we arrived at Wogo, eerily quiet while the fog was still blanketing the village. Only a few houses were visible from where we stood, no sound at all, only an old woman living in one of the outer houses greeted us.

As soon as James and I started to break the silence with the sound of our cameras’ shutters, the fog slowly lifted up. First rows of houses started to be clearly seen, then… two, three, four kids suddenly appeared, playing in a dirt field nonchalant of our presence. As the minutes progressed the disappearing fog revealed not only the still structures of the village, but the entire populace of Wogo. They were there out of their houses since before our arrival, but curiously the fog not only concealed sight, but also sound.

The village was actually new Wogo as the old village was burned down some time ago. But Dino assured us that the new village was built exactly in the same manner like the old one, preserving the traditional U-shape layout where thatched wooden houses surround an open space dotted with small umbrella and house-shaped structures.

“The open space is owned together by all clans residing in Wogo,” Dino explained and quickly added, “You see those houses, all of the male and female symbols are stored inside the houses. People bring them out only once a year, during Ngadanese New Year celebration, also known as Reba.” 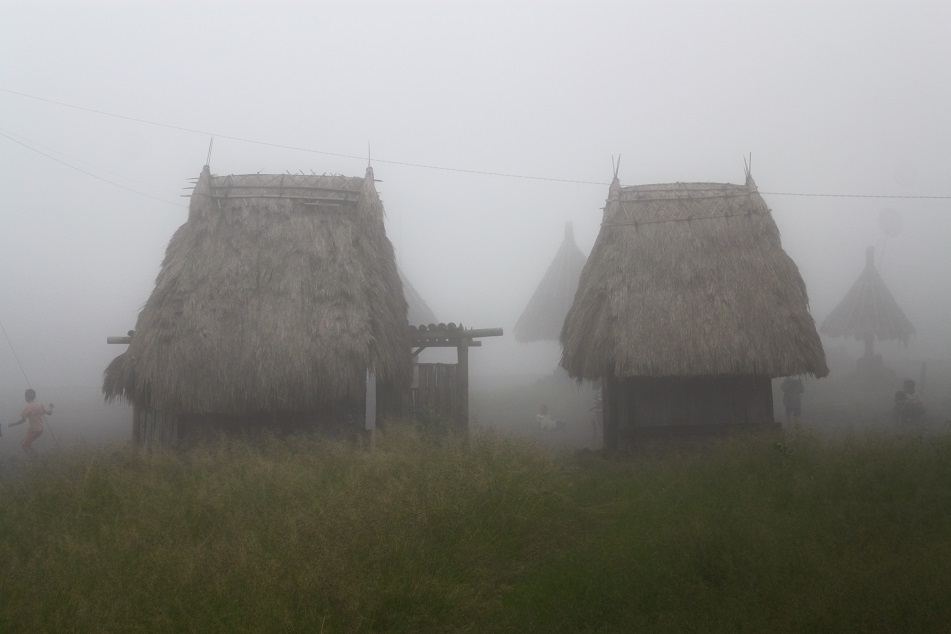 The Village of Wogo after the Fog Cleared Up

A Newer and More Modest Construction 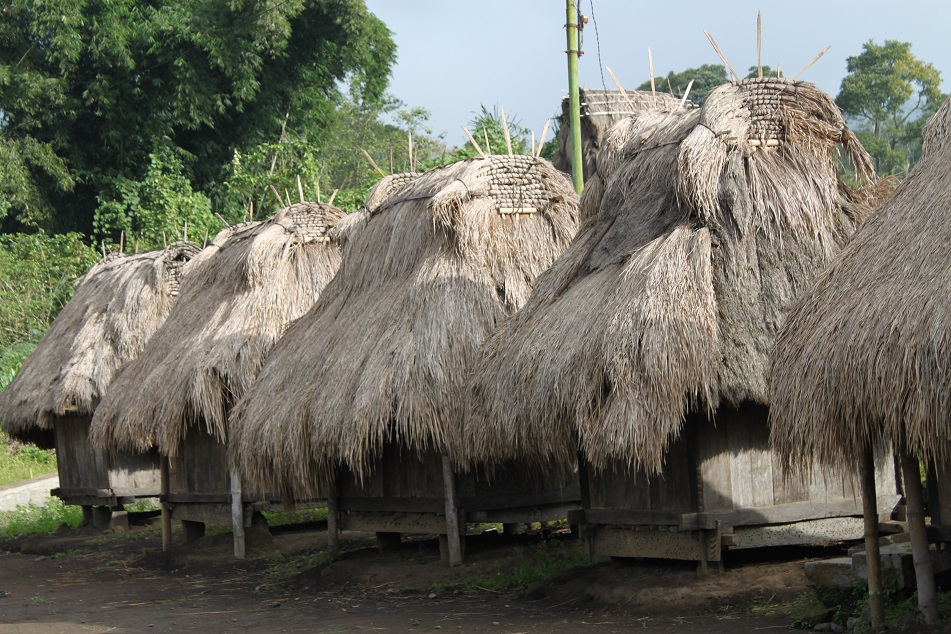 The Sole Pathway around Wogo

Remnants of Past Sacrifices 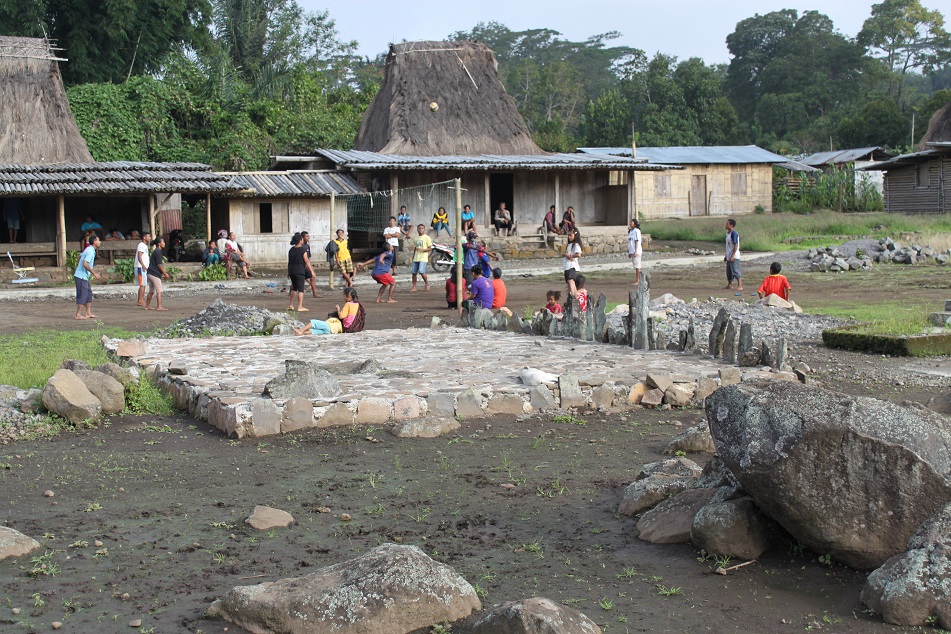 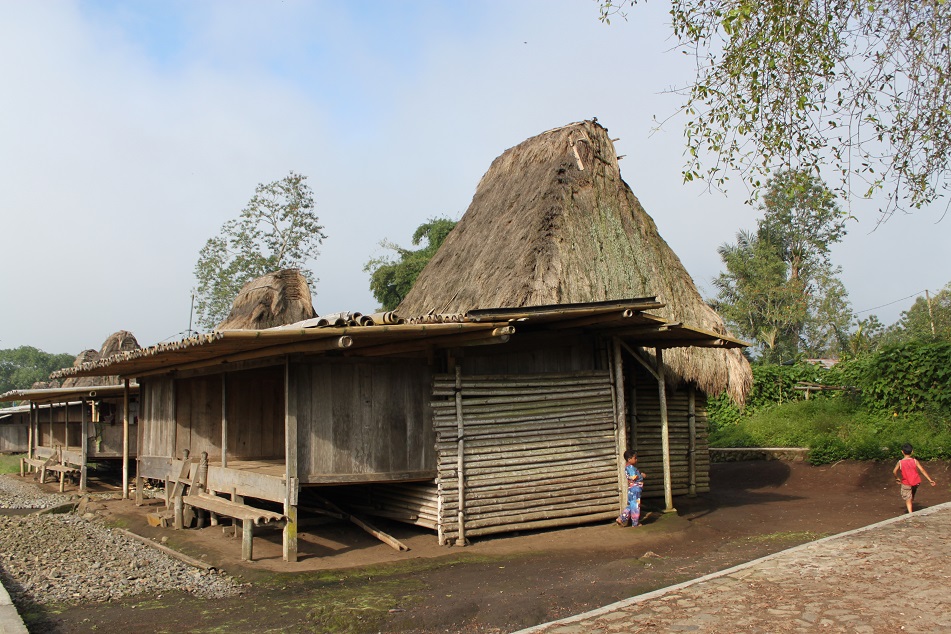 Children Playing Outside Their House

After walking on the cobblestone pathway around the village and exchanging smiles with some friendly and curious locals, we went back to our car to continue our journey to Bena before the day got dark.

Bena is arguably the most famous of all traditional villages in Ngada and upon our arrival at the village we figured out the reason. Sitting on an uphill terrain right beneath the behemoth that is Mount Inerie, Bena was both picturesque and atmospheric.

Encircled by traditional houses and divided into several levels, the open space of Bena was filled with a cornucopia of ngadhu – umbrella-shaped thatched structures, bhaga – small house-shaped structures, and a number of megaliths with big pointy stones piercing the ground.

A long time ago Bena was founded by ten men and eight women, the first settlers of the village and ancestors of almost everyone living in Bena today. As with other animist beliefs, veneration of ancestral spirits forms the foundation of the local people’s beliefs, therefore they erected scores of ngadhu and bhaga, representing their male and female ancestors respectively.

Each ngadhu was crowned by a man-like effigy with both hands holding weapons: a knife and a spear. Meanwhile, with a hollow space underneath the thatched roof a bhaga was less decorated compared to a ngadhu. The male and female symbols were found on top of the 18 original houses in Bena – representing the number of the village’s ancestors, ten men and eight women – as well as on newer houses, signifying which side of the ancestor a clan came from. Contrary to the houses in Wogo where male and female symbols were hidden inside the houses, in Bena they were proudly displayed on the roofs.

Bena in the Afternoon

The Top of A Ngadhu

A Bhaga (front) and Two Ngadhus

The Roof Decoration of A Men’s Clan House

The Terraced Platforms of Bena 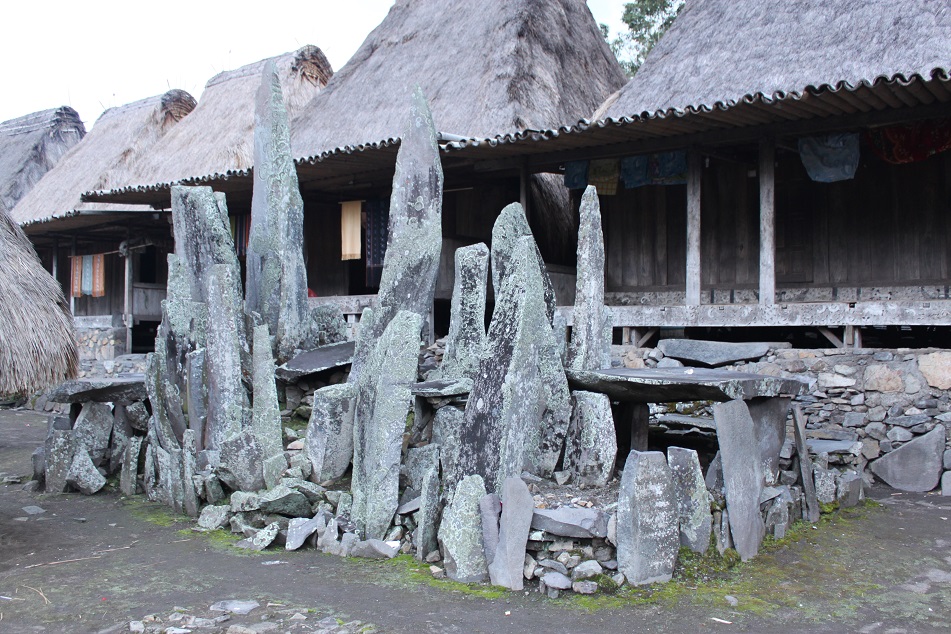 Megaliths Used as A Court of Arbitration

The sun started to hide behind the clouds in the western horizon, leaving just enough light for us to roam the village for a few more minutes. We walked uphill, past the megaliths which were once used for placing offerings to the ancestors. Today, however, the locals use them as the court of arbitration to solve disputes in the village. Perched at the end of the hill, a grotto with a statue of the Virgin Mary overlooked the entire village, a reminder of the village’s embrace for Catholicism despite people’s adherence to animist rituals.

From this vantage point it was clear how Bena was precariously sandwiched between Mount Inerie and verdant hills, making this tranquil village naturally protected from the outside world. Hence the late arrival of Catholicism to the village. I turned my back and looked at the village. To my left two teams of young men were playing volleyball, watched by other villagers from their houses, while children were running around the megaliths. Whenever the options of entertainment are limited, sport seems to always be the preferred choice for most people to kill time.

It was a few minutes before sunset, and we walked down to where our car was parked, past the unique traditional houses with wood carvings, buffalo horns, and colorful cloths strewn all over their verandas. When we walked closer to the last house, an old man signaled us to come into his house.

“It’s the house of the chief,” Dino told us.

The old man smiled at us, showing his red-tinted teeth and lips from chewing betel nut and leaves – a habit shared by many Florenese – and ushered us in. Inside the wooden house, the strong smell of dried cocoa beans filled the air as they were spread out on the floor. Small light bulbs were the only source of light, bright enough to allow us to identify everything under the roof. With hand gestures and broken Bahasa Indonesia, he told us to go through a narrow door to enter a chamber at the center of the house, the most important part of a Ngadanese house.

To our right, a small traditional kitchen was smothered in soot, while in front of us three important artifacts were hung on the wooden wall. In the best Bahasa Indonesia he could possibly speak the old man explained about each item: a spear for traditional ceremonies, a dagger for sacrificing animals, and a small pouch for arak, a traditional liquor essential for Ngadanese during ceremonies.

Despite only understanding a portion of what he explained to us, it was obvious that the old chief was more than eager to share the local values for the entire village depended on people like him to preserve their unique culture. “You can’t just walk around the village and understand it,” he said.

He might have a big responsibility to preserve the village’s culture. But that night he was more interested in spending quality time with his friends in another village, probably with endless supply of arak. 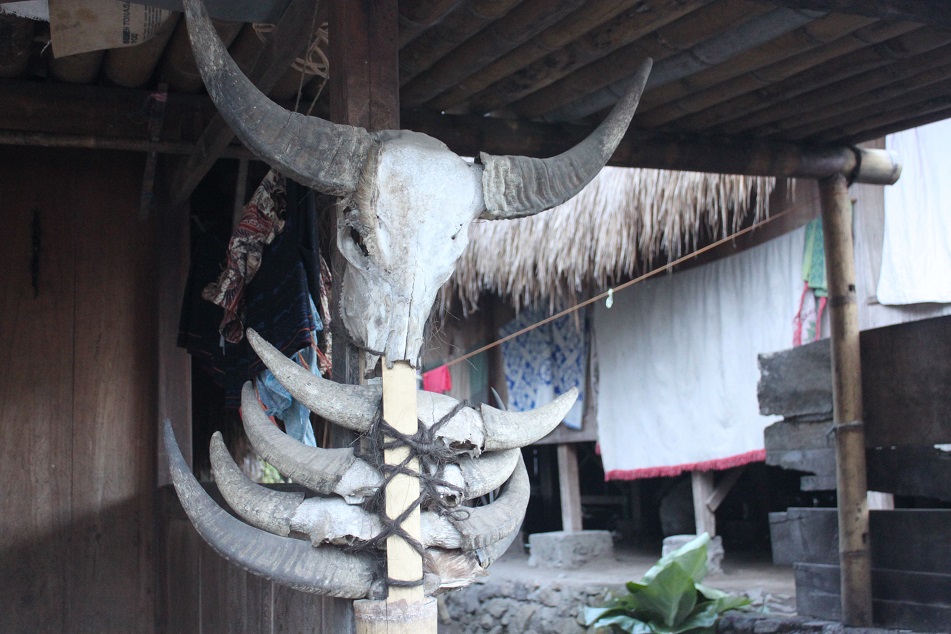 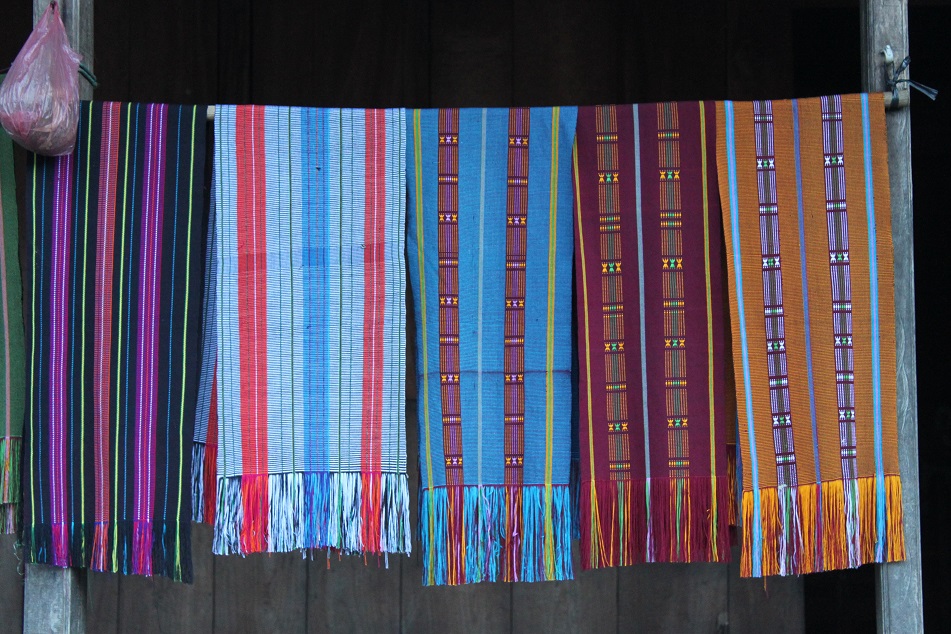 Wood Carvings at A Veranda 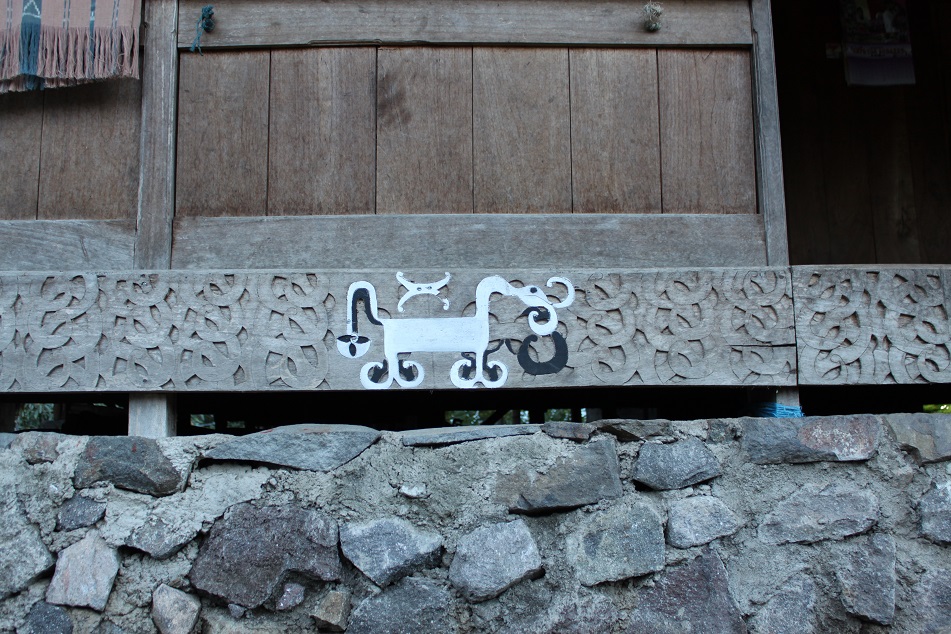 The More Horns You Have, the More Interesting Your House Becomes

On the Slopes of Mount Inerie

48 thoughts on “Wogo and Bena: A Tradition Preserved”