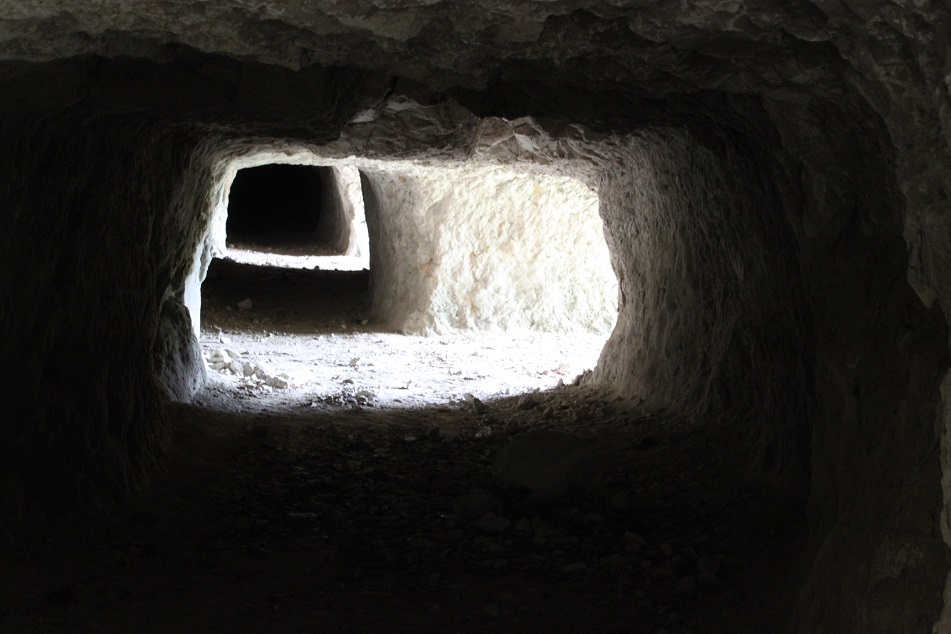 Simon, our driver who is originally from the Indonesian city of Atambua in West Timor, transports us from Baucau to the small town of Venilale in the hilly interior of Timor-Leste. The roads are in a fairly good condition, but with few vehicles passing by it is not surprising to find them so.

Moments after I fall asleep, Simon suddenly pulls over, but we are not yet in Venilale. Johnny comes out of the car and walks across the road, showing us hollow limestone chambers on a hillside. Gua Tujuh – which means seven caves in Bahasa Indonesia – is an artificial cave system built by Japanese troops when they occupied Portuguese Timor during World War II. Strategically positioned to the north of Australia, the Japanese aimed to gain control of the entire island of Timor from the Dutch – who occupied the western part of the island – and Portugal – who controlled the east.

“More than 4,000 people were killed in these caves,” Johnny says. “Timorese women were told by the Japanese that their sons and husbands were sent to Japan to study. But they never returned.”

Despite the dark history of these caves, the silence is soon broken by the giggles and laughter of local children who seem excited to see foreign visitors coming near their village. Johnny plays around with them, joking that he will take them away in his car. The kids burst into laughter and run around as Johnny gives chase.

Having taken enough photographs of the caves, and of course the kids, we bid them goodbye and continue our journey south to Venilale. With a total population of around 16,000, Venilale could have been forgotten by many people who visit Timor-Leste. But this rural town holds a significant role in the country’s education – and to some extent, the struggle for independence – as it is where many of Timor-Leste’s political leaders went to school. Xanana Gusmão and José Ramos-Horta themselves attended the town’s Escola do Reino de Venilale, the most prestigious elementary school in town.

Earlier that day when we were still in Baucau, Johnny told us that both leaders also attended the same secondary school in Baucau which was exclusively open for Portuguese nationals and children from Timorese royal families, a group to which both Gusmão and Ramos-Horta belong. They even went to the same college in Laclubar in Manatuto District.

I joke with Johnny, saying the older they got, the closer they moved to Dili.

Playing Around with Friends

Cycling around the School

Johnny tells us that during the Indonesian time, all children, regardless of their family background, were entitled to an education. Therefore the once exclusive Portuguese school in Baucau was transformed into a public school.

On our way back to Dili through Baucau I notice a modest gapura ubiquitous in many Indonesian cities engraved with the numbers 17-8-98. The tradition in Indonesia is towns and villages would decorate their gapuras every year to celebrate the country’s independence day on August 17. It is apparent that August 17, 1998 was the last time the people of East Timor celebrated – reluctantly or not – Indonesia’s independence day. Time stands still in some parts of Timor-Leste as many signs, monuments, and other things left by the Indonesians are scattered all across the country, untouched.

A small rusty board on the roadside from Venilale and Baucau reminds drivers to be careful, written in Bahasa Indonesia and bearing the emblem of the Indonesian highway corporation. Looking at it reminds me of how the British naturalist, Alfred Russel Wallace, upon visiting the island in the late 1860s described Portuguese Timor in his widely acclaimed book, The Malay Archipelago:

“The Portuguese government in Timor is a most miserable one. Nobody seems to care the least about the improvement of the country, and at this time, after three hundred years of occupation, there has not been a mile of road made beyond the town [Dili], and there is not a solitary European residence in the interior.”

Indeed, the 24-year Indonesian occupation of East Timor resulted in the development of vital infrastructure such as roads and bridges. But let us not forget the oppression and violence targeting the local people during that period, which brought the full wrath of the Indonesian military and pro-Indonesian militia following the independence referendum in 1999.

Back again in the sleepy capital of Dili, we meet Carmen who looks as lively as before. Curious about our days in Timor-Leste she asks what we think of the places we have visited, and we tell her about everything, including Johnny and all his stories.

“You may choose to believe it, but you may also choose not to believe.” She expresses her skepticism and quickly adds that “sometimes they make up stories.”

I personally don’t believe some exaggerations that Johnny tells me, but I choose to take it seriously when he tells us about all the atrocities carried out by the Indonesian military. Despite not being able to make a reconciliatory effort as I intended, I can at least get an honest perspective from the son of an ex-guerrilla fighter about how it was during the struggle for independence from Indonesia.

“Will you stay in Timor-Leste for much longer?” James asks Carmen, curious about a woman who left Portugal more than 11 years ago to live in a new, faraway country since its independence in 2002.

“No, I will stay only for another year, then I will probably go back to Portugal.”

She raises her concerns about the slow steps – baby steps – taken by the government to improve not only the country’s economy, but overall living standards.

“Corruption is everywhere here. In Portugal we also have corrupt officials, but they try to hide it. And at least they do something for the people. But here, they openly pocket the oil money.” Carmen cannot hide her frustration.

“When the Australians and other foreign troops and officials came to East Timor after the referendum, things were in order. East Timor had the opportunity to learn from other countries. But after they left, people just want to do things their own way.”

Oil has brought immense income to the young country. But as is the case with many nations, particularly among developing countries, wealth is not widely distributed among the people. Wars have begun in many parts of the world due to this reason. But only a few countries have learned and successfully manage things in a much better way. Timor-Leste has the potential to have a strong economy – backed by the hydrocarbon, coffee and tourism industries – only if all elements of the nation have the same awareness of that goal.

Johnny graduated from university in Dili, majoring in Petroleum Sciences. Despite his current job as a tour guide, he has high hopes for the future of his country. “I want to continue my study one day and learn geology,” he says, expressing his hope to one day take part in developing the country’s energy industry.

Hope runs high, but a lot of work still needs to be done.

A Church Near Escola do Reino de Venilale

53 thoughts on “Venilale: Putting Together Pieces of the Puzzle”