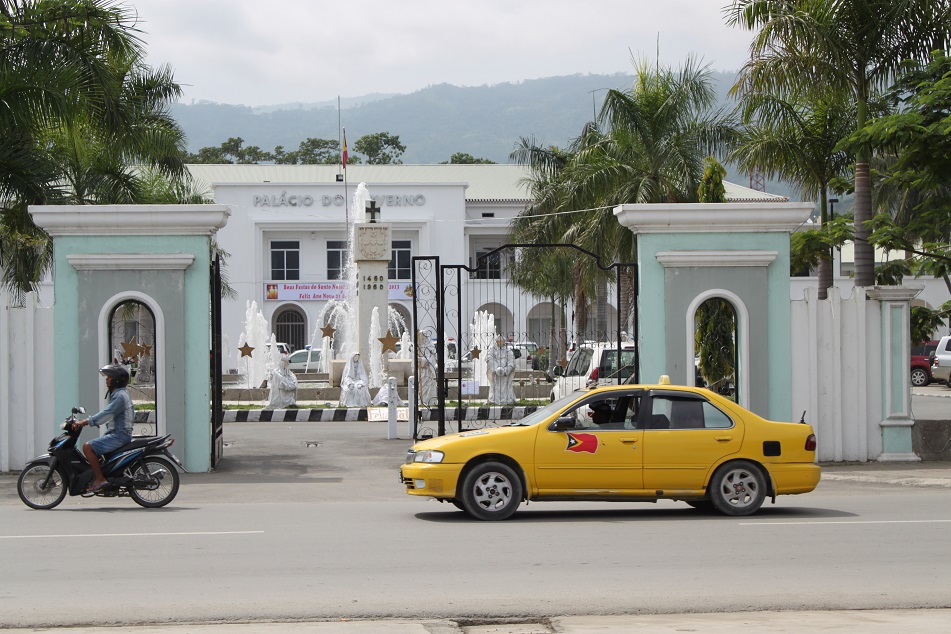 It is almost 2pm in Timor-Leste (formerly known as East Timor) as our plane starts its descent towards Dili, the capital of Asia’s newest nation. The rugged green landscape below looks untouched and undeveloped, a stark contrast to an aerial view of Bali – where we departed – with its more developed tourism industry. Marqy, the East Timorese man sitting next to us, looks eager to be back after staying in Macau, Bangkok and several other places around Asia.

A few minutes later we land at Nicolau Lobato International Airport, the country’s sole international airport which is served by less than five airlines connecting Dili with Bali, Darwin, and Singapore. The high roofs of the airport terminal remind me of images of Timorese houses, while the the country’s flag waves in the breeze – it must be a great source of pride for the East Timorese to see that symbol of nationhood hoisted on their land.

Muito passado, mais futuro. A billboard written in Portuguese welcomes us as we walk down the tarmac towards the terminal building. Timor-Leste is one of two places in Asia in the Lusophere – the other being Macau. However the Portuguese influence is much stronger here than in the Chinese SAR as I don’t recall ever seeing any billboards in Portuguese when I went to Macau almost two years ago.

The airport terminal itself is an old and small building, jam-packed by incoming passengers from Bali with the arrival of another flight from the Indonesian island just a few minutes earlier. There is only one conveyor belt for the whole baggage claim area, and it moves very fast – too fast for most people – as they  struggle to take their bags and suitcases without harming other people around, and themselves.

On our way to the city center where our hotel is located I spot things that are normally seen in Indonesian cities. Indonesian restaurants, billboards in Bahasa Indonesia, and Indonesian consumer products are ubiquitous despite the end of Indonesia’s occupation in 1999 – the year East Timor voted for its independence. In the meantime, our driver plays an Indonesian song in his car, as do many other vehicles and foodstalls by the streets.

Indeed Marqy told us earlier on the plane that the East Timorese are still able to speak Bahasa, except those who were born in the past decade. This brings back memories of Manila where I met three East Timorese who said that Portuguese is a lot harder than Bahasa. “Terlalu banyak verbo,” a woman explained, too many verbs.

In fact, Tetum – the national language of East Timor – has a lot of loanwords from Portuguese and Bahasa. “Tetum’s vocabulary is 50% original Tetum, 25% Portuguese, and 25% Indonesian,” Marqy tells us.

Many ex-UN cars fill the streets of Dili, sharing space with regular cars and motorbikes. However one flashy red sports car steals my attention in this unlikely place for such an automobile. In the meantime some local men walk around with a pole slung over their shoulder, selling snacks such as boiled bananas and peanuts. Upon arriving at our hotel, two young men approach us, one with souvenirs of dried coconut and the other selling credit for prepaid cellular phones.

We meet Carmen, the hotel manager who came from Madeira, Portugal to Dili more than 11 years ago when Timor-Leste gained its independence. She has been living in the city since then, including during turbulent times for the new nation between 2006 – 2008, when the army clashed with the national police. Telling her about our first impressions of Dili, including the city’s move in embracing modernisation by having its first glass ‘skyscraper’, Carmen is not impressed.

“That is growth, not development,” she says, and quickly adds that “real development means a lift in people’s purchasing power.”

It is not hard to see her point based on what I saw earlier from the streets. Youth unemployment is rampant and the economic gap between the handful of rich and the poor majority is very conspicuous. The country’s GDP has been growing rapidly in recent years as an oil export boom helps its impressive growth. A few years back I recall reading an East Timorese official stating that the country is aspiring to be the next Brunei whose oil wealth is spread among its people, making the small nation one of the most prosperous in the world. But what I have witnessed in Dili is a far cry from that.

Not everyone is as lucky as Marqy.

A Young Snack Vendor in Front of Casa Europa 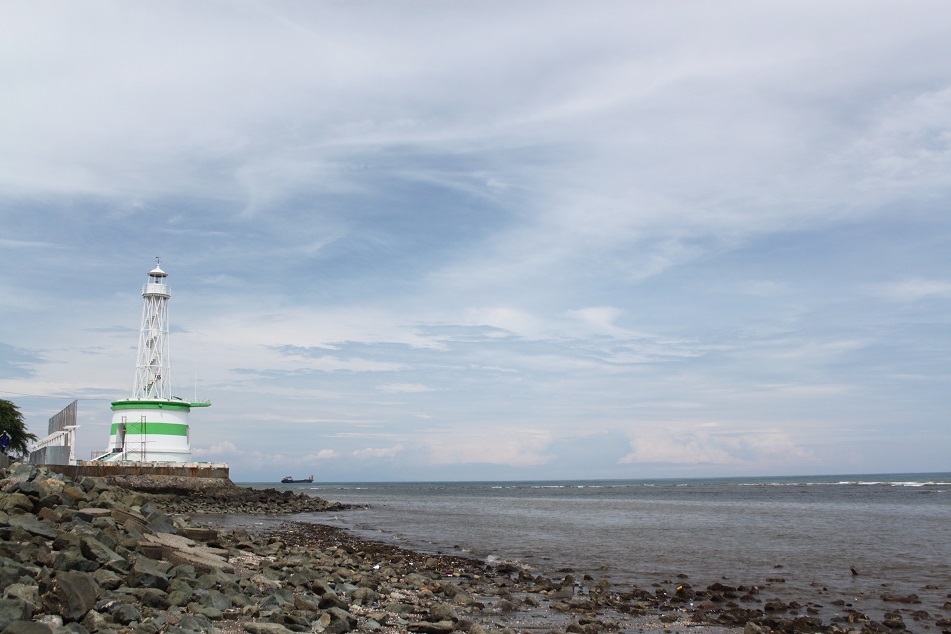 A Lighthouse at Dili’s Waterfront 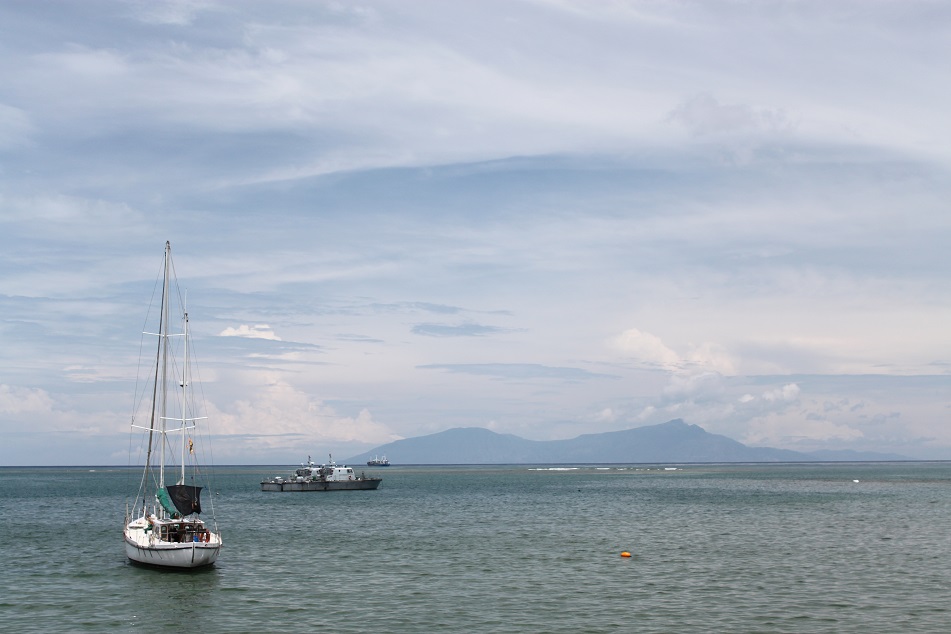 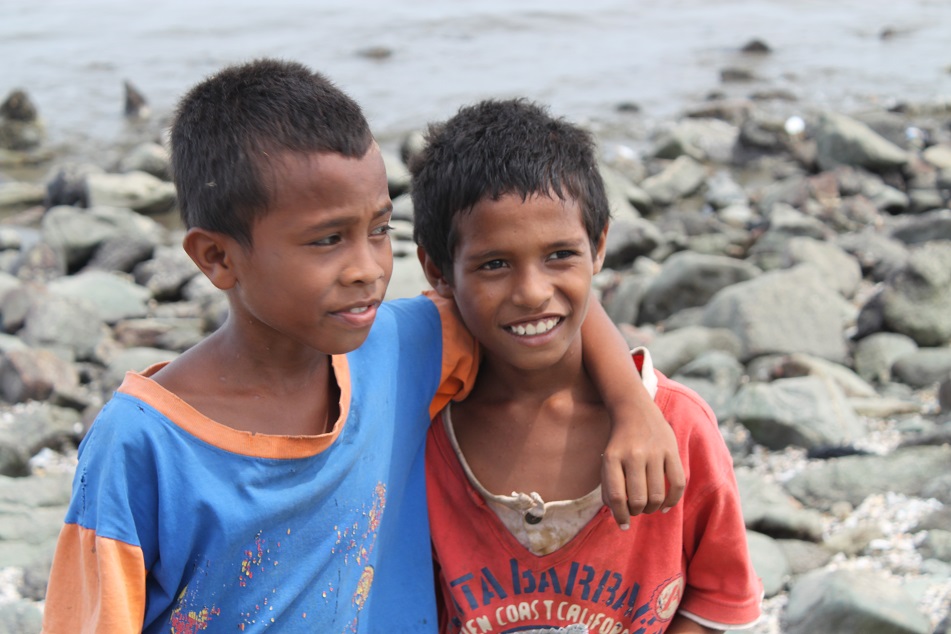 One of the most prominent landmarks of Dili is Cristo Rei, the 27m high Jesus statue on top Cape Fatucama to the east of the city center. The history of the statue is very much related to the history of the country itself and the struggle of its people. Once a Portuguese colony for more than four centuries, Portuguese Timor – as it was called – was abandoned in 1974 following the Carnation Revolution in Portugal which overthrew the dictatorship and brought the country into democracy.

Political factions in East Timor sprang up not long afterwards, including the left-leaning Fretilin (Frente Revolucionária de Timor-Leste Independente). However the new independent country was soon engulfed in a civil war between warring factions with Fretilin emerging as the most powerful political faction. Hardline Indonesian military leaders saw the turmoil in East Timor as an opportunity to launch an invasion on the new country, similar to what India did in Goa years before and taking over control of the region from the Portuguese.

Backed by the Western world’s fear that the new nation would fall under Soviet influence, and as a preemptive action to prevent a Cuban Missile Crisis from happening again in the backyard of a Western nation – Australia in this case – Indonesia with support from the US and Australia launched an invasion on East Timor and forcefully integrated the region as the country’s 27th province – an action that has never been acknowledged or justified by the UN.

As the Soviet Union started to decline, so did support from the US and Australia towards Indonesia’s annexation of East Timor. Increasing insurgencies in East Timor in the 1980s did not help conditions get any better and eventually in 1991 a massacre by Indonesian troops in Dili on East Timorese protesters sparked worlwide condemnation, encouraging more organized action to promote East Timor’s independence.

For millennia political leaders have known that religion is one of the most effective ways to garner support of the people. That was exactly what former president Suharto did by commissioning the construction of a large Jesus statue in Dili, hoping it would buoy East Timorese sentiment towards Indonesia. Today Timor-Leste is in fact one of only two predominantly Catholic countries in Asia – the other being the Philippines. However the statue itself is potent with Indonesian propaganda: The height of the statue symbolizes East Timor’s position as Indonesia’s 27th province and it faces west, towards Jakarta.

Two years after the completion of the statue, known as Cristo Rei, the unimaginable happened. Indonesia was hit hard by the 1997/98 Asian Financial Crisis which eventually led to the fall of Suharto regime. In the aftermath of the political turmoil, a transition period was led by Bacharuddin Jusuf Habibie, who proposed a referendum for East Timor to vote for either independence or the choice to remain in Indonesia as an autonomous region, a gesture he hoped would end the decades-long struggle in East Timor. However, the move was very unpopular among Indonesian military leaders which resulted in an unthinkable bloodbath following the results of the referendum where an overwhelming 78.5% of East Timorese voted in favor of independence.

The UN soon sent an interim mission for peacekeeping in East Timor, urging the Indonesian military to retreat, which left a bloody trail in its wake. My trip to Timor-Leste’s second city of Baucau soon revealed the atrocities conducted by the belligerents during the struggle for independence and the post-referendum chaos. 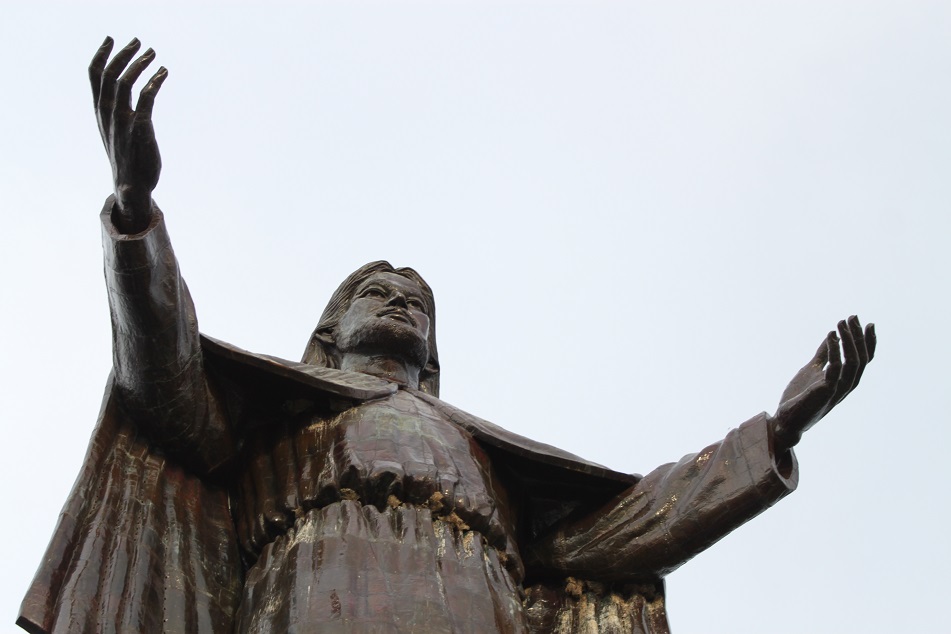 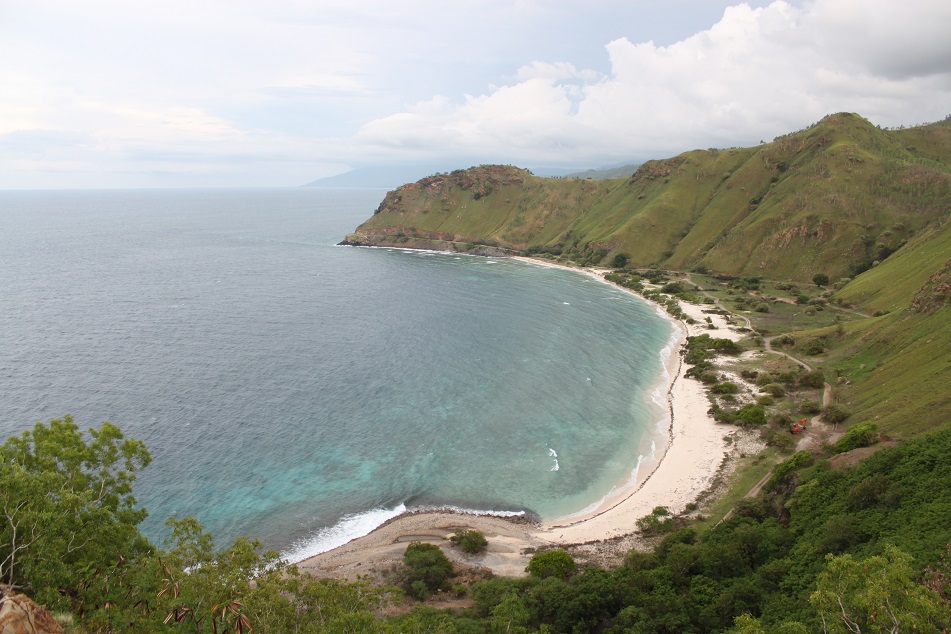 An Unspoilt Beach behind Cristo Rei 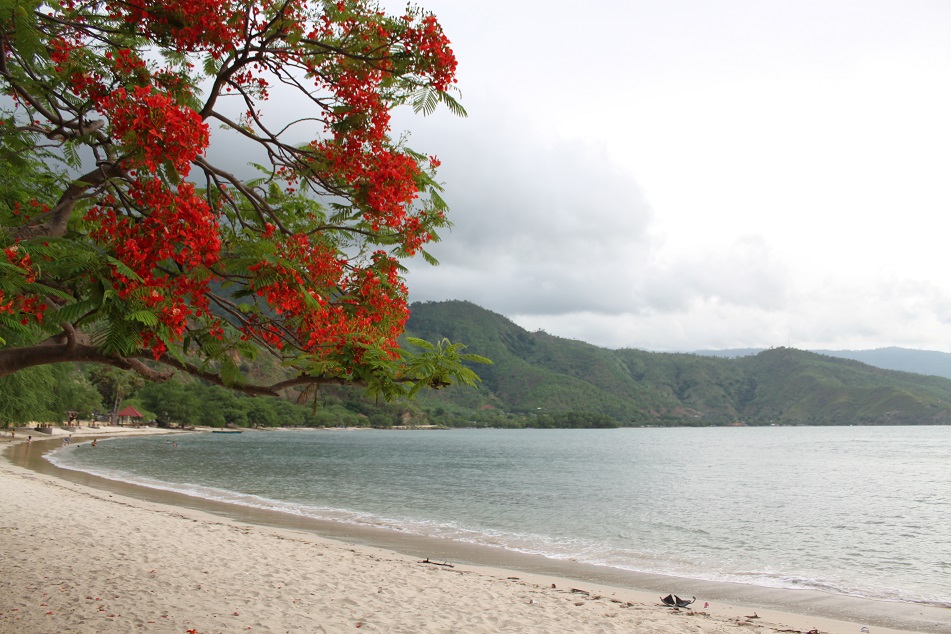 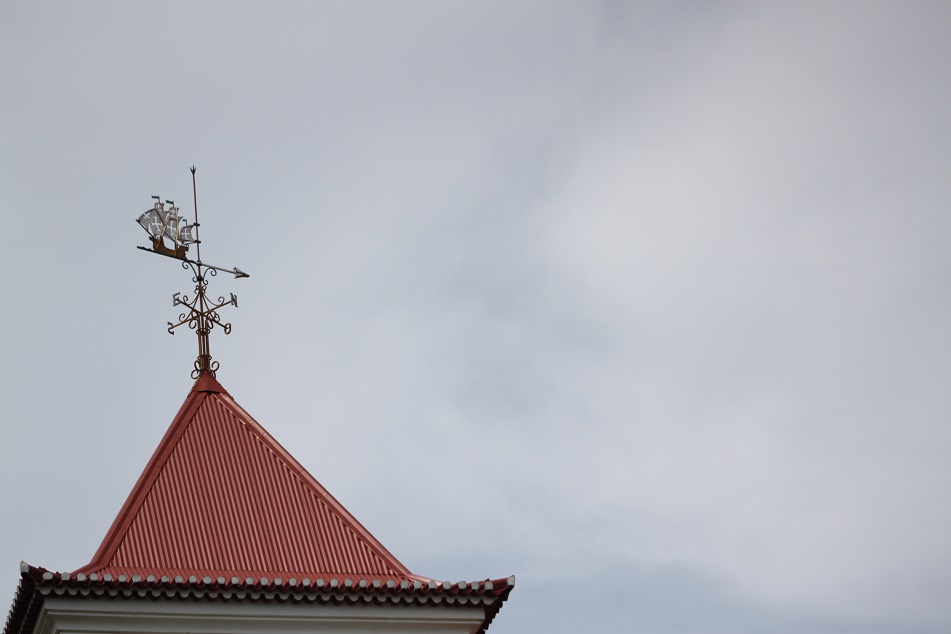 Portuguese Touch on the Rooftop

A Monument in Front of Motael Church 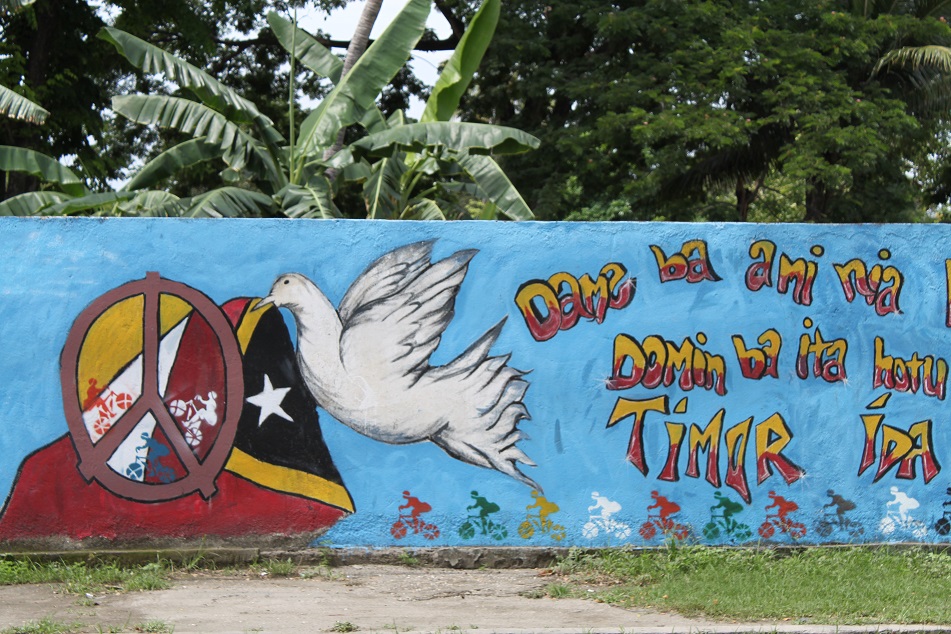 Back in the sleepy waters of Dili, three cargo ships are docked in Dili Port. From their names I can tell that they are all Indonesian: Tiga Anugerah, Raja Ampat and Mahakam River. In supermarkets and kiosks around the East Timorese capital, Indonesian products dominate the shelves. Despite the thorny relationship between the two countries in the past, both share so many things in common, too many for any future frictions.

Some East Timorese believe that crocodiles are their ancestors, hence they are venerated animals in the country. In fact both the northern and southern coasts of the country are crocodile habitat. “The crocodiles in the north do not eat people,” a man from a tour company tells us. “The southern beaches are great for surfing and skin diving, but crocodiles there are too aggressive” he adds.

Soon after that conversation, James and I book a tour to Baucau and Venilale to the east of Dili where a journey to better understand the country and its history awaits.