The 19-seated Dornier 228 was parked on the far side of the apron of Taitung Airport. A huge hose was blowing Oxygen into the cabin when James and I entered the plane. Seated on the first row behind the cockpit, we could clearly see what was happening behind the control panel – the pilot and his co-pilot communicating to each other while holding pieces of paper with tables and numbers printed on them. After all passengers were seated, it did not take long until the old iron bird ascended to the sky, leaving the Taiwan mainland behind.

30 minutes later a green and rugged island emerged from the low-hanging clouds, shrouded by the fog. Rows of towering mountains and hills sloped down to the cobalt sea, bringing my memories to Isla Nublar and Isla Sorna – two fictional islands from Steven Spielberg’s Jurassic Park and The Lost World. Lanyu – better known as Orchid Island – is one of the most remote islands in Taiwan and also the home of the Tao, one of the aboriginal tribes of Taiwan.

Shaokang, the young proprietor of our homestay, greeted us at the arrival hall of the tiny airport after we reclaimed our baggage from the back of a pickup truck. Driving his minivan back to his homestay through the light drizzle, Shaokang explained a few things to James along the way – later I found out that he told James some do’s and don’ts regarding the culture and custom of the Tao. We passed through several villages where houses covered in white tiles dominated the view, such a stark contrast to the breathtaking natural landscape sitting behind.

After dropping our bags at the homestay and another short conversation with Shaokang, we rode the scooter and started navigating the narrow ring road of the island. Shaokang told James earlier that there is no need to wear the helmets, something I have not done for a long time. Stopping at the first gas station we saw – and the only one on the entire island – we greeted the staff with àkokay, “Hello” in the local language. The attendant who helped us fill the tank was startled. Her face implicitly told us that very few visitors did the same thing, greeting the locals the way they greet each other. Bearing a physical resemblance to most Southeast Asian people, I often felt as if I was really close to home, and locals often mistook me as one of them.

Right beside the gas station, a small beacon was perched on the top of a rock, overlooking the picturesque water below. I gazed down, amazed by the rippling sapphire sea. Turning around, the natural walls of island’s volcanic spine covered with trees and bushes provide a majestic backdrop to the blue water.

Peeking into the Cockpit 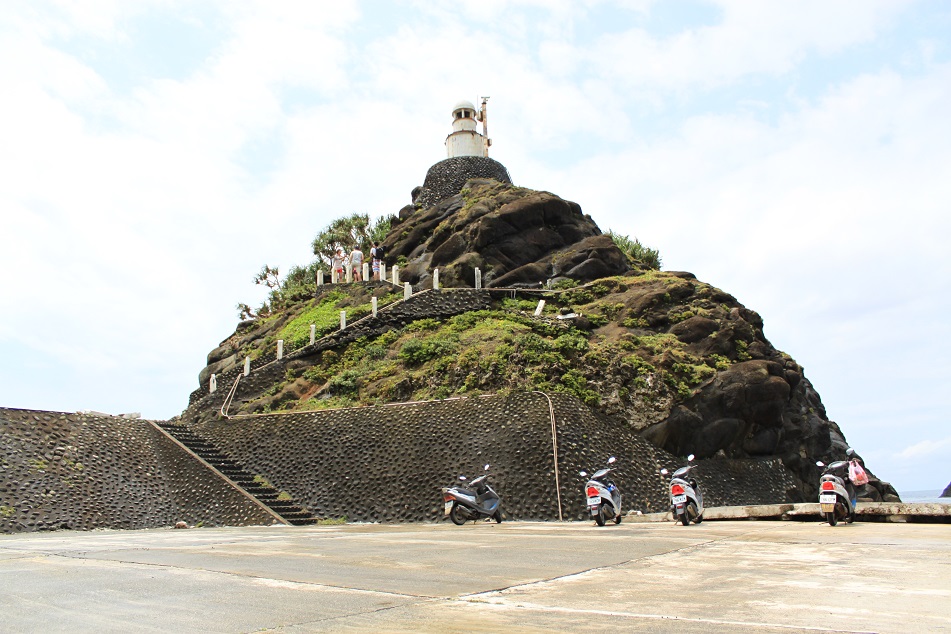 Green Backdrop for the Cobalt Water 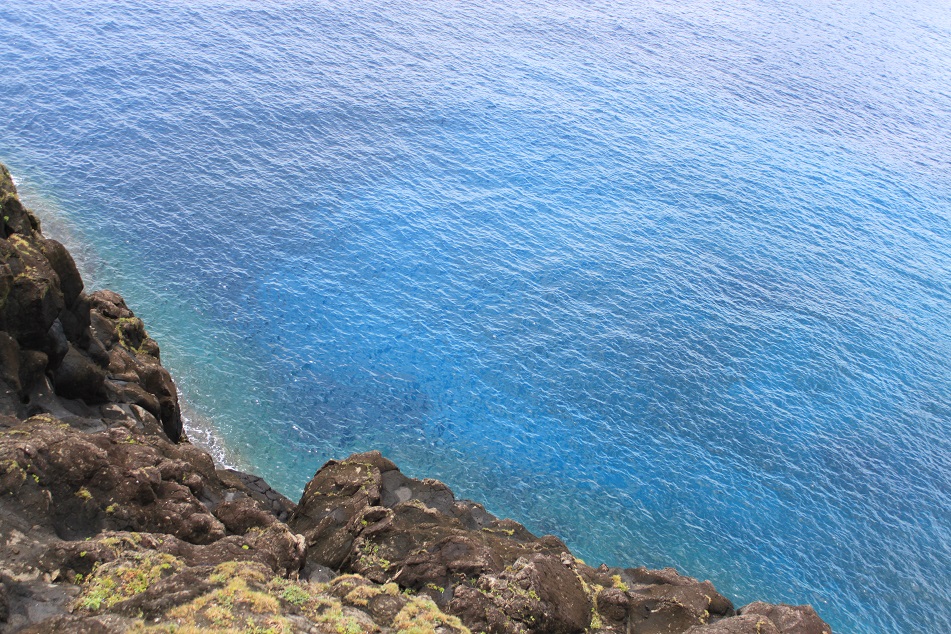 Nature at Its Best

The breeze from the ocean and the mountains touched my face as we continued exploring the island on our scooter. “This is exciting!” James couldn’t hide how much he enjoyed his first ever experience riding on a scooter. I rode the two-wheeled vehicle towards a lighthouse atop the northwesternmost tip of the island, through a snaking road on the mountainside. Halfway to the lighthouse, we stopped at the roadside to marvel at the breathtaking expanse of the west coast. The emerald highlands on the left met the sapphire water on the right, separated only by the narrow ring road. Despite having never been to Hawaii, the breathtaking vista of Orchid Island’s western coast reminded me of images of the 50th state of the US.

The lighthouse itself is situated in a small compound built to sustain itself due to its remoteness. One man walked from one building to another, crossing the neatly cut field of grass and completely indifferent to our presence. Not spending too much time around the lighthouse as it was actually forbidden to climb the structure, we decided to go back and visit the small lake off the road. Taking heed of a small signboard as the only hint to get to the lake, we parked our scooter and walked down a dirt pathway through dense scraping bushes. As we ventured deeper into the forest, big butterflies – the biggest I have ever seen – were the only moving creatures we saw. An abandoned tent was hidden under a tree, close to the point where we found out that we went to the wrong direction as the pathway ended on the edge of a cliff.

Tracing back the trail where we came while trying not to get lost, we finally found a forking pathway studded with the ubiquitous moon peach blossoms. The further we walked the shorter the bushes, and the stronger the wind blew. James had told me earlier that the lake might be dried out, but we decided to keep exploring the place nonetheless. A short moment afterwards, we did find the lake – without any water there was only a dried lake bed.

But excitement can be created even out of the most unlikely situation. We decided to go down the steep rugged pathway to the lake, and walked on the lake bed. It was such a weird sensation to walk on the fluffy and soft earth covered in dried moss with cracks on the ground, hoping for water to fill them in. 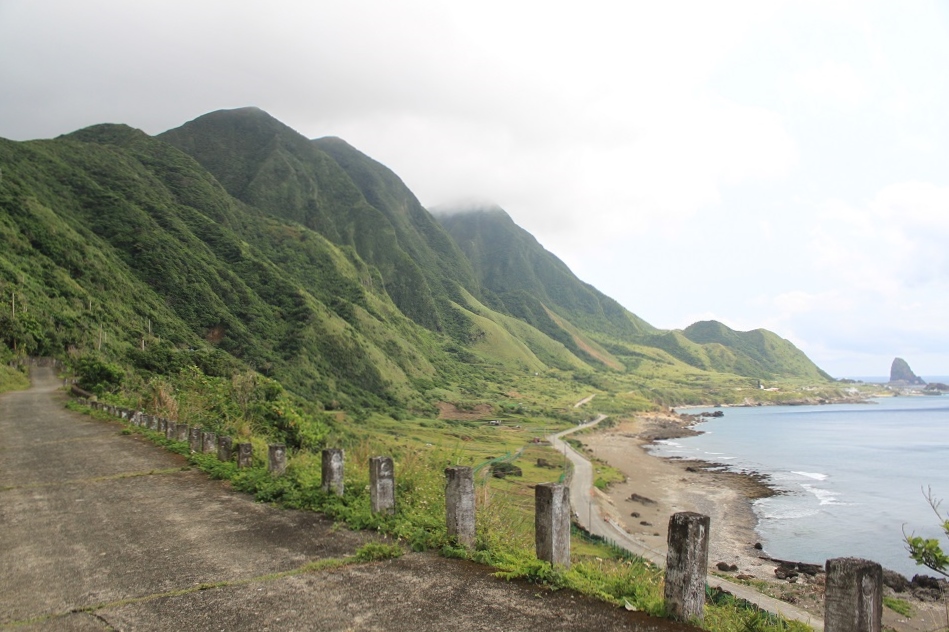 The Northwestern Coast Viewed from Near the Lighthouse 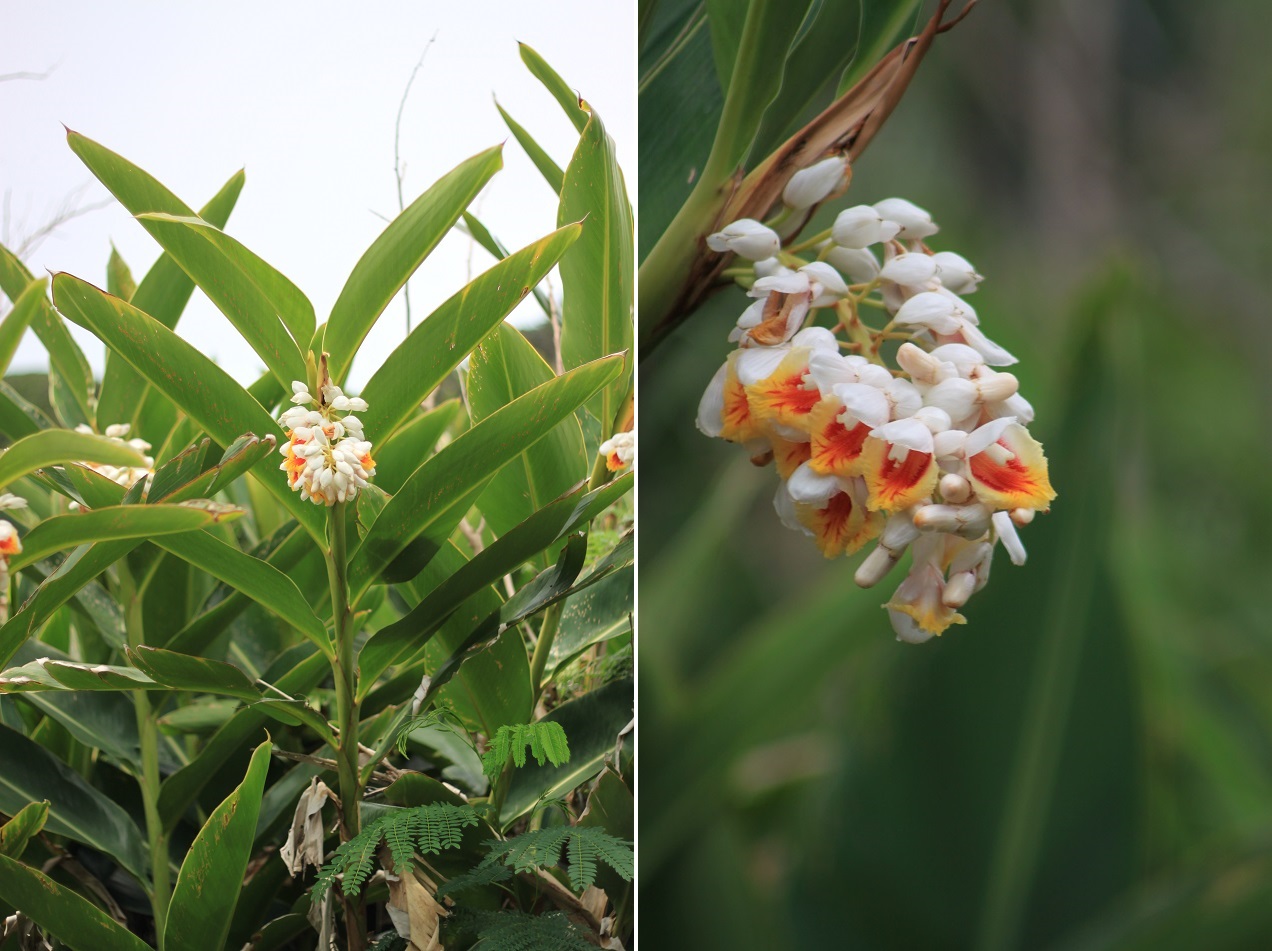 Heading back to our scooter, I revved up the engine and continued circumnavigating the island. Orchid Island is most well-known for its strange rock formations. Crocodile Rock, Beauty Rock, Hen Rock, Two Lions Rock and Dragon’s Head Rock are some of the most imaginatively-named rocks on the coast of the island, albeit with little resemblance to the real objects. After the trip to Orchid Island and my previous trip to Xingping in Southern China,  I came to the conclusion that the Chinese do have some of the most evocative ways of naming geographical features.

As we arrived at the northern coast, we were overwhelmed by the strong gust from the Pacific Ocean. I had to slow down the scooter to keep the balance as it was the strongest wind I have ever felt while riding a two-wheeled vehicle. Along the northern coast, the sheer beauty and mystery of the island constantly blew my mind away. One particular mountain stood like a giant wall at the end of one long straight stretch of the ring road, before it bends to the left circling the volcanic fortress. There were moments when upon seeing something new our mind would associate that to a strange thing from our memories. This time the mountain reminded me of a scene from Eragon, one of the most captivating fantasy books I have ever read by far.

Around lunchtime we arrived at Dongching Bay on the eastern coast of the island. We picked a small yet cozy restaurant where a white cat, a black dog, and the soothing sound of a ukulele would accompany us during the lunch. “All of the ingredients were grown on the island” claimed the owner who was also the cook. The supposedly ‘extra spicy’ fried rice that I had was anything but spicy at all, thanks to all of the super spicy food I have at home.

“Does he look like a local?” James asked the lady about my physical appearance. Locals always found it amusing to discover how physically similar Indonesians are with the Tao.

“Ayoy! Meikunan!” We thanked the owner and bid her farewell before continuing the exploration of the island with full stomachs, only to later discover the bleak side of this paradise.

Riding through the Hills, Literally 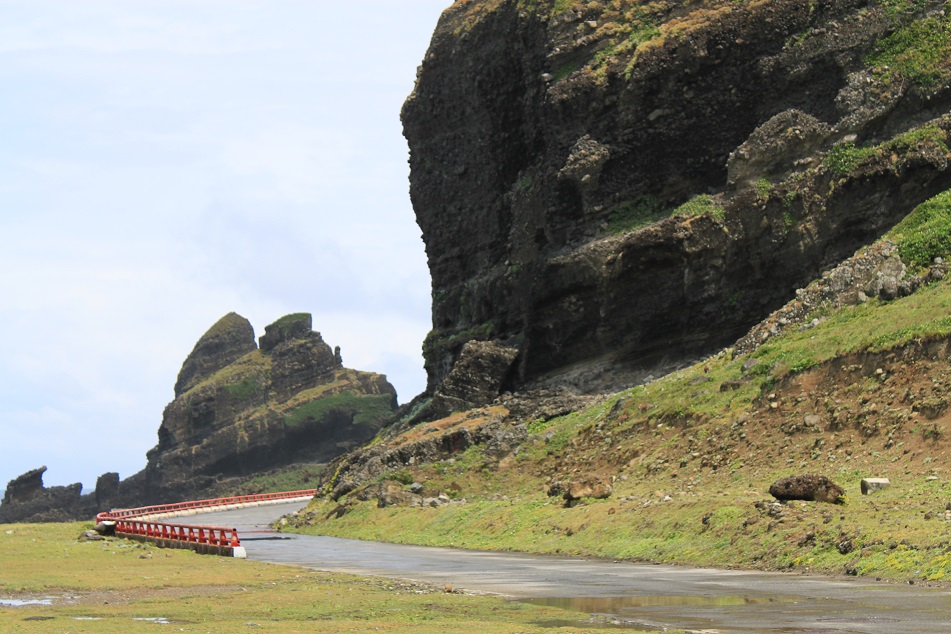 On the Scenic Road

Goats on A Giant Rock

A Scene out of A Fantasy Movie 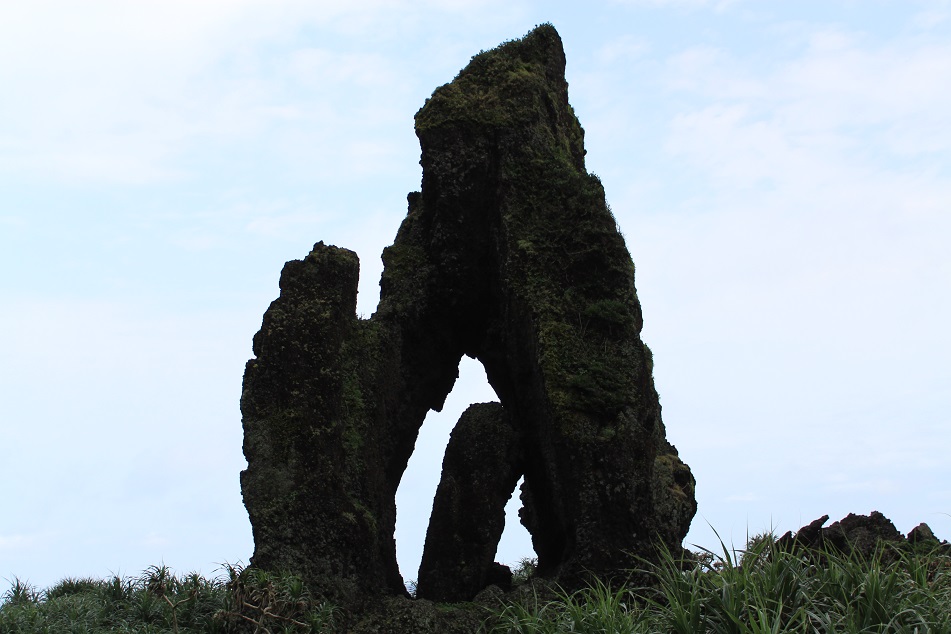 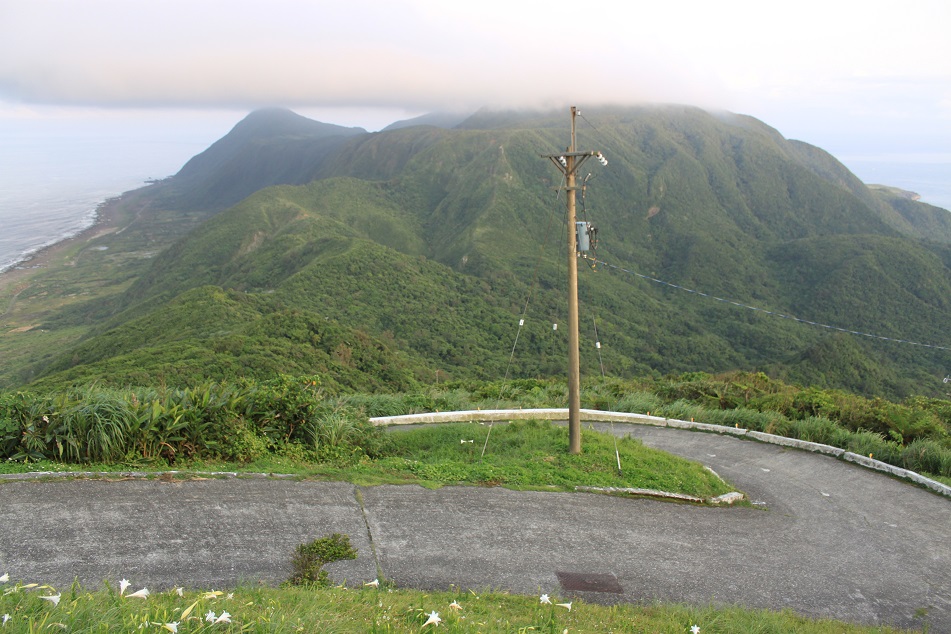 A Panoramic View from the Weather Station

Cutting through the Dense Forests

The Mantou Rock, After the Chinese Steamed Bun