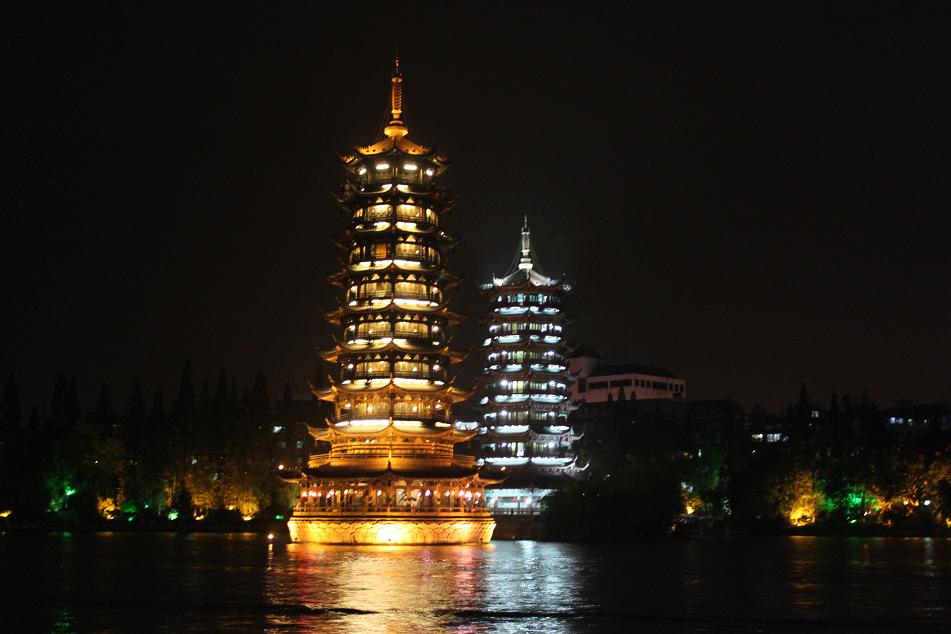 Towering karst peaks, a lake and two pagodas were the things I used to think of whenever someone mentioned the name Guilin. To some of my friends Guilin is one of the cities in China they most want to visit, thanks to its legendary picturesque landscape. There were also numerous television programs and travel books covering this place with nothing but positive reviews. Given so many reasons to go, I finally booked a return ticket to Guilin almost a year ago.

Arriving in Guilin, my first impression of the city was far from pleasant. It was not even close to being called an idyllic place. Motorbikes zigzagging though cars, streets, alleys, and even pedestrian crossings plus the dreary image of China’s rapid industrialization did not help at all.

But four days later we are lucky to meet Tommy on our last day at the Longji Rice Terraces, just hours before returning to Guilin to spend a night in the city.

Sharing the same minivan with us and some other people, Tommy later becomes our unexpected tour guide in Guilin. After finding our way to the hostel to drop our bags, Tommy then takes us through leafy streets around a much friendlier part of the city where his favorite restaurant is located. Along the way he tells us about some random things including his campus and family. I am often surprised by how frank and straightforward he is, speaking about sensitive issues which are not usually discussed in public, from personal freedom to education, history and politics. After walking several blocks, including going down a pedestrian subway, we arrive at the restaurant. “Ah, they still have empty seats!” Tommy says in relief.

Marinated sea snails, sliced vegetables and a fish head hotpot with tofu – which is completely new for me – are the dishes he orders. Over the dinner he continues talking about his family, mentioning the story of his grandparents who went through much hardship during the Cultural Revolution. It is such an eye-opening story for me because I now understand why some people in the country tend to have disdain for foreigners. However, meeting a young Chinese like Tommy gives me a glimpse of a changing society where the younger generation is more tech-savvy, sophisticated and increasingly likely to question critical things about their lives.

Concluding the satisfying meal with a very refreshing Hami melon juice, Tommy insists on footing the bill. We are caught off-guard – it’s a great act of kindness for two strangers he met just a few hours earlier. Before leaving the restaurant, Tommy asks me if I carry any Indonesian rupiah with me. Apparently he has a penchant for foreign bank notes even though he is not a numismatist himself. Compared to what he has done, giving him a rupiah note in return is rather insignificant. Had we not met him I believe we would have struggled to find a good place to have dinner.

With our stomachs full, Tommy takes us to a part of the city which is off-limit to motorized vehicles. Cobblestone streets and modern stores, boutiques and cafés offer a friendlier ambiance in the city. En route to the famous landmarks of Guilin – the Sun and Moon pagodas – we stop for a while for a performance by a local street violinist near the lake. In his suit, he solemnly moves the bow through the strings, producing melancholic melodies attracting a small crowd of passersby. After two songs, we move on and follow the embankment of the lake to find a perfect point to capture the two pagodas. However there is nothing really special in this place other than the gaudily lit trees and a small café.

The night is getting late and on our way back Tommy brings up the idea of going to a café. He is eager to take us there because the place is owned by a personal friend and local traveler, whose wanderlust is more than noticeable from the flags and international bank notes which are posted on the wall. A cup of hot chocolate with brandy is my choice to warm up the night over some light conversation. Meeting Tommy has made all the difference to our stay in Guilin.

17 thoughts on “When A Stranger Saves The Day”