If you google anything about Hong Kong these days, most results will probably show the territory’s number of COVID-19 cases, although compared to the rest of the world, Hong Kong seems to have managed to flatten the curve.

And if months ago you also googled about the territory, the results would most likely show the prolonged protests, triggered by incidents that have been perceived as Beijing’s increasing interference in Hong Kong’s domestic affairs, a violation of the Sino-British Joint Declaration which guarantees the territory’s autonomy for 50 years since its handover to China in 1997.

These unprecedented series of events have hit Hong Kong hard, especially given its status as one of the world’s financial centers as well as an important aviation hub in the region. Its economy contracted by 1.2% in 2019 and is expected to further shrink this year. Meanwhile, Cathay Pacific, one of Asia’s most reputable airlines which is based in the territory, as of the first week of April 2020, only flies to four destinations, each served by two flights per week. This dramatic turn for the 73-year-old flag carrier, which a few months ago still flew to almost 80 destinations in more than 30 countries around the world, is attributed to the Hong Kong government’s decision to ban foreign travelers not only from entering the territory, but also those transiting through its airport to curb the spread of the novel coronavirus.

I couldn’t have visited Hong Kong at a better time: toward the end of last December, just when the months-long protests had decreased in intensity, and before COVID-19 started to wreak havoc.

One morning when the weather is nice, albeit a bit hazy, James and I take the MTR from Hong Kong Island to Kowloon, on the opposite side of Victoria Harbor. We’re eager to visit the newly-renovated Hong Kong Museum of Art (HKMoA) after its reopening following a four-year overhaul that the city’s first public art museum badly needed. James recalls its outdated façade which looked similar with that of the adjacent Hong Kong Cultural Centre. Despite standing in this prime location since 1962, the former had been eclipsed by the architecturally more arresting cultural center as well as the oddly-shaped planetarium nearby. However, in the middle of ongoing protests in the city, at the end of November, HKMoA quietly reopened to the public with little fanfare.

I am pleasantly surprised with what I see. A modern-looking structure covered with a textured façade in a metallic gray tone stands next to a beautifully-manicured garden. Along its approach from Salisbury Road, art installations rise from the ground with their smooth, undulating surfaces reflecting the morning sun. While waiting for the museum to open, we stroll down the recently reopened Avenue of Stars – that famous seaside promenade with a statue of Bruce Lee from which people can see the iconic skyscraper-studded skyline of Hong Kong Island across the harbor.

With the uninspired and old-fashioned tiles along the walkway replaced by brighter and modern-looking ones, the refreshed seaside promenade looks polished and spacious, with the addition of greenery here and there making it feel welcoming. On this particular morning, especially, some locals are making the most of the warm temperatures running or walking while tourists take lots of selfies for Instagram or to share with their families back home. We walk the length of the avenue, past a golden cube designed by starchitect Rem Koolhaas which is called, well, Kube, and a new mall with an interesting living wall (a green wall where real plants are grown). We also come across a shiny statue of McDull, a popular cartoon character a lot of young adults in Hong Kong grew up watching.

After seeing the statue of Bruce Lee himself, which had been moved further away from its original location before the renovation, and that of Anita Mui, a Cantopop diva who was known as Madonna of the East, we return to the museum to see what’s inside. A young staff member at the entrance talks to James in Cantonese, which he translates to me moments later. “There’s an exhibition from the Tate Modern which we have to pay for. But for the permanent collection it’s free.” As we go upstairs, one floor after another, it becomes clear that the money allocated for renovating this museum was really well-spent. Every part of it looks elegant and up-to-date, with large windows affording views of Victoria Harbor complementing the museum’s stately appearance. Each of its well-curated sections comes with a specific theme, including classical Chinese art as well as modern art in Hong Kong. While these are undoubtedly interesting, I find some of them especially fascinating for their background stories.

The city’s planetarium right across the street from The Peninsula, one of the city’s oldest luxury hotels

The museum is located on Victoria Harbor, facing the city’s financial center 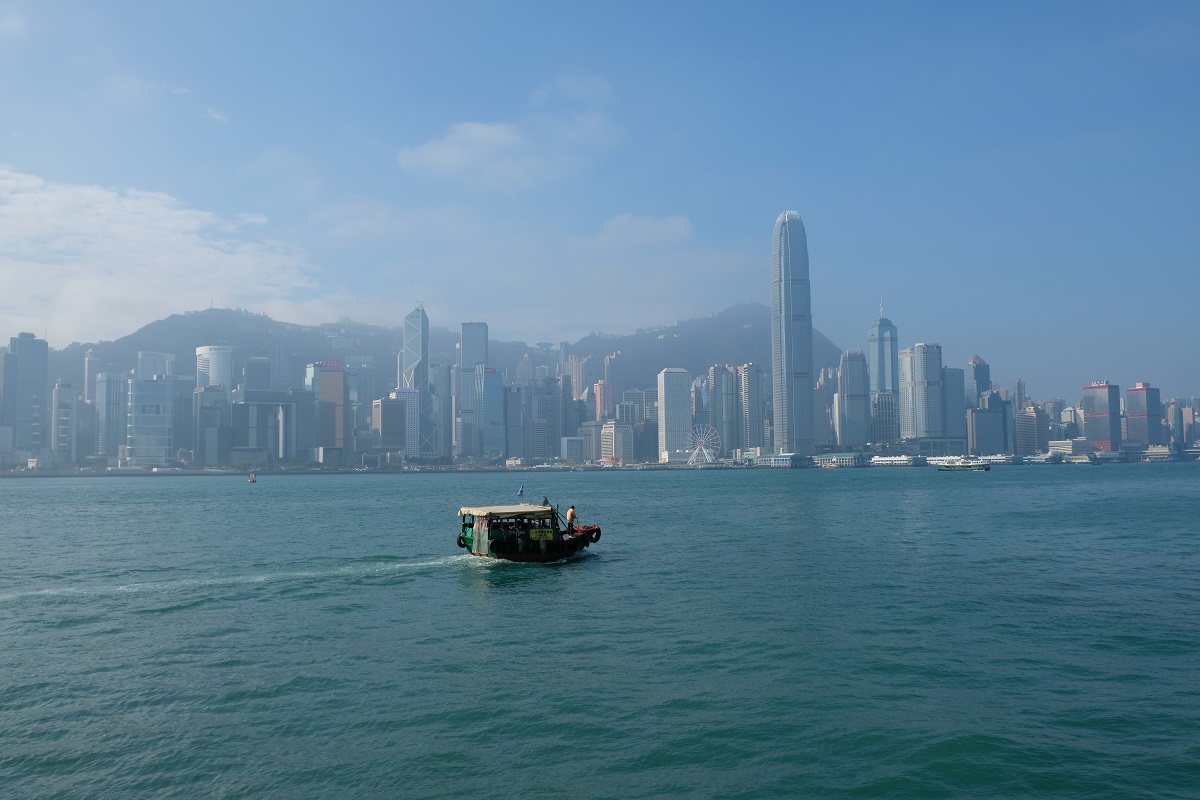 Can’t take my eyes off the harbor

A wide and clean promenade encourages people to be more active 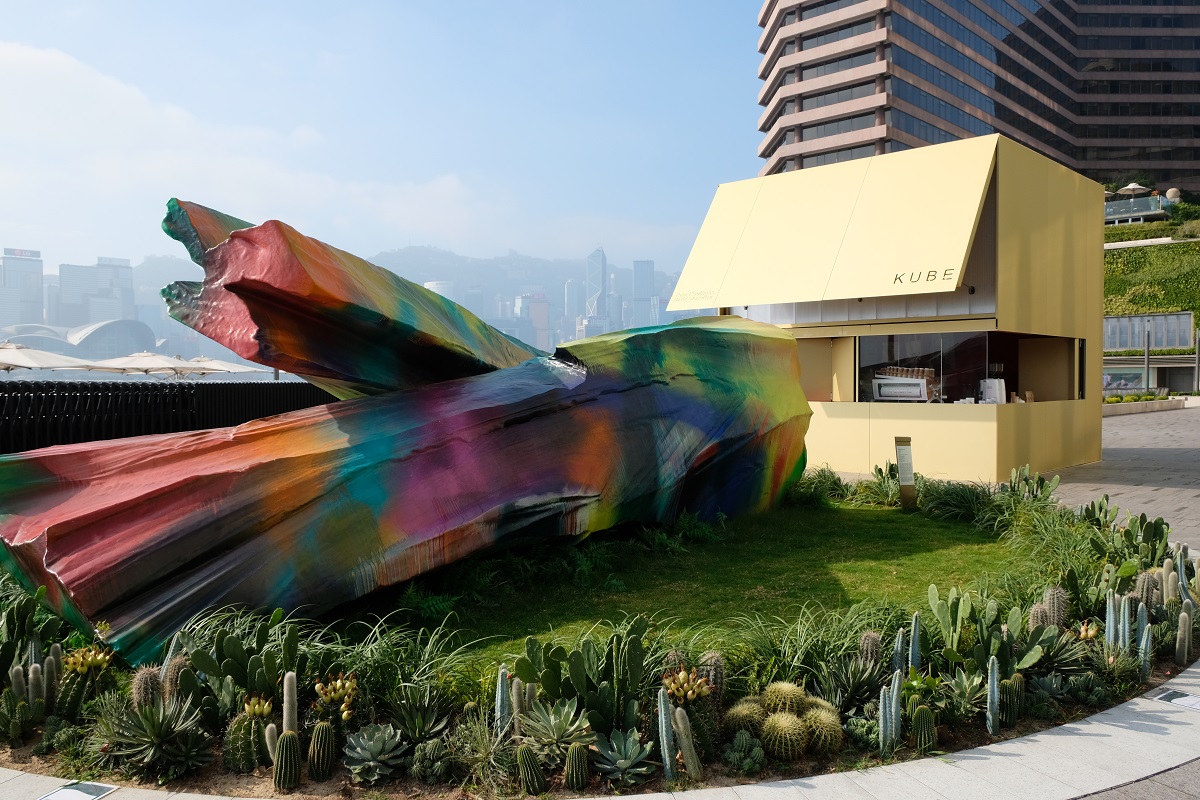 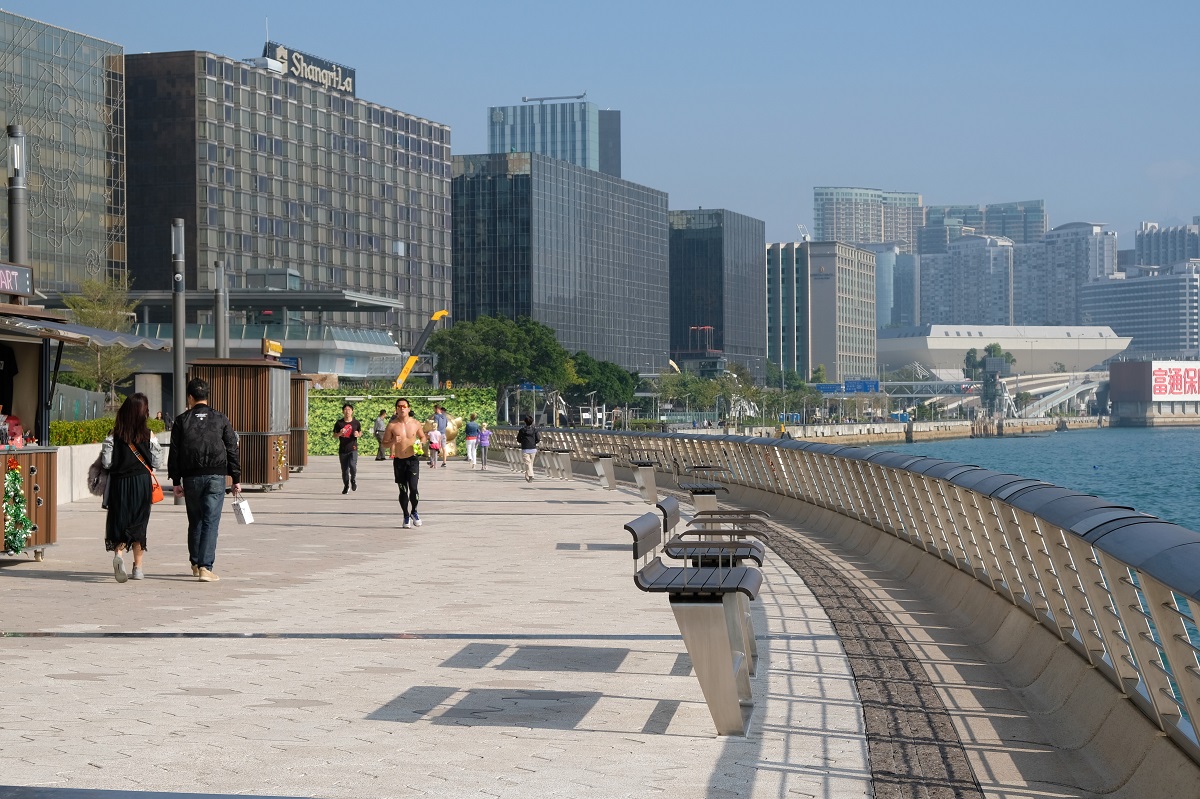 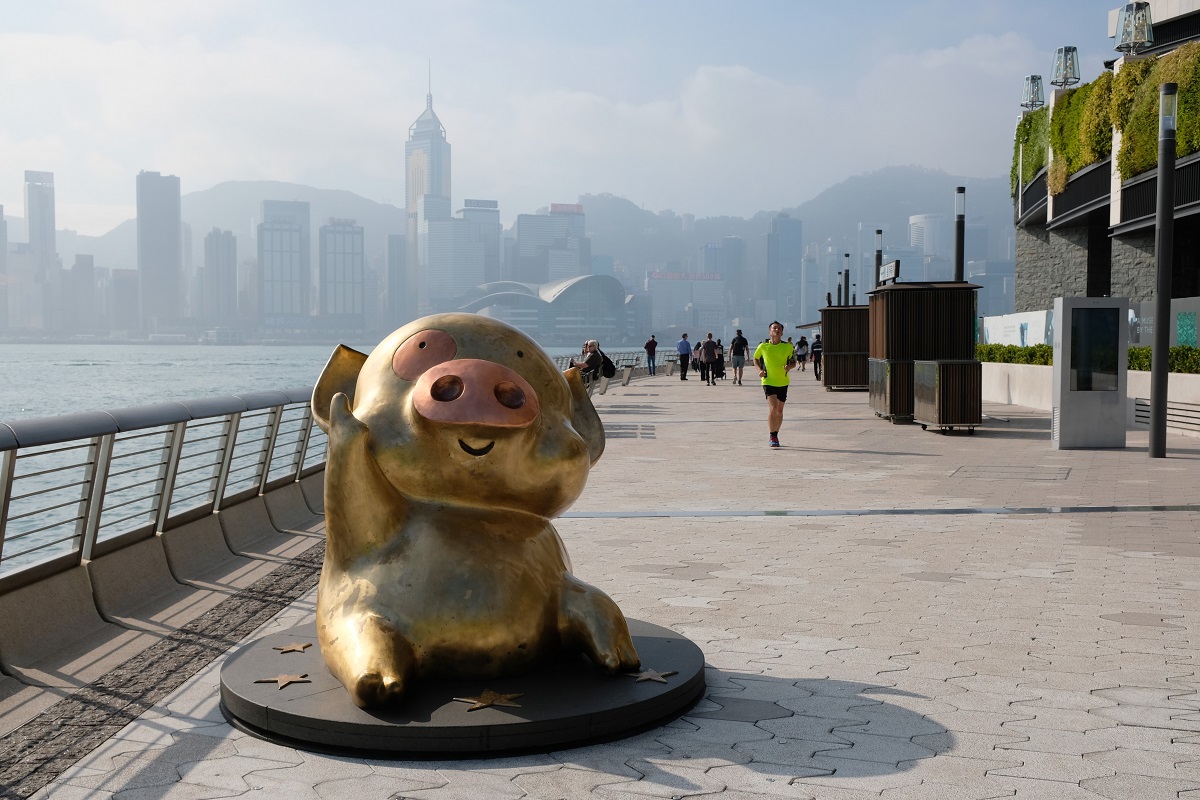 Back to the museum’s grounds

Near the main entrance to the museum

Inside HKMoA with a magnificent view of Hong Kong Island

A small painting depicting a cascade which is believed to be the one at Waterfall Bay Park on Hong Kong Island’s western shore is in fact one of the earliest visual records of Hong Kong. Made in the early 19th century when the island had not yet become a commercial hub, it is now placed in a purposefully dimly-lit gallery focusing on early artworks of Hong Kong. In another part of the museum, the Chater collection section showcases the paintings rescued from destruction in the past thanks to the selfless acts of individuals who saw the true value of the artwork beyond mere money. It’s a sobering reminder of the threats – wars, neglect and economic crises, to name some – the world of art constantly faces.

When we move from one gallery to another, it’s not only the collection that changes, but so does the ambient music. I don’t remember any other art museum I’ve been to where visitors are not only stimulated visually, but also aurally. One particular permanent collection of the museum I find most intriguing is Xu Bing’s A Book from the Sky. At a glance, it appears to be floating long scrolls inscribed with Chinese characters. But upon closer inspection, none of those characters are real. It took the artist four years from 1987 to 1991 to invent more than 4,000 pseudo-characters, which would then be printed to look as if it was a classic text. This unreadable work of art is a critique of traditional values as well as a metaphorical way of challenging the establishment.

Contrary to other galleries within the museum building, the uppermost floor is a lofty space housing some intriguing and thought-provoking works of art. Some of them combine traditional aesthetics with futuristic shapes; others put more emphasis on social criticism with quirky twists. However, one section might stir local Hong Kongers’ emotions the most, not because of the artwork itself, but more because of the accompanying narrative. In this corner, photos of old Hong Kong are on display, looking back to a bygone era. But when one reads the printed explanation underneath each photo, some phrases and words that are used are conspicuously pro-Beijing. For instance, the founding of the People’s Republic of China is described as the “Liberation from the Nationalist’s white terror”, probably intended to antagonize Taiwan; and the 1997 ceremony where Britain relinquished its control of Hong Kong to China which has always been called the “Handover” is now referred to as the “Reunion”, a careful choice of words implying that Hong Kong’s future is firmly within China.

When the museum was quietly reopened last year, with all these ‘approved’ narratives echoing through its walls, the city still faced daily protests aimed indirectly at the Chinese central government. For the time being Hong Kongers are still able to express opinions freely as opposed to their Mainland Chinese counterparts who are increasingly being watched by Big Brother. When the locals walk through the museum’s doors, they will be welcomed by a grand modern building that houses some of the city’s most precious art collections. But they will also be presented with a glimpse of the future, of an era after 2047 when the principle of One Country, Two Systems – a main point in the agreement between the British and the Chinese governments during the handover negotiations – expires. When that day comes, these ‘approved’ narratives might no longer be confined to the walls of the museum itself. But before this happens, and after the pandemic passes, locals and foreign visitors alike can take some inspiration from HKMoA’s collections to face a future that is ever unpredictable. 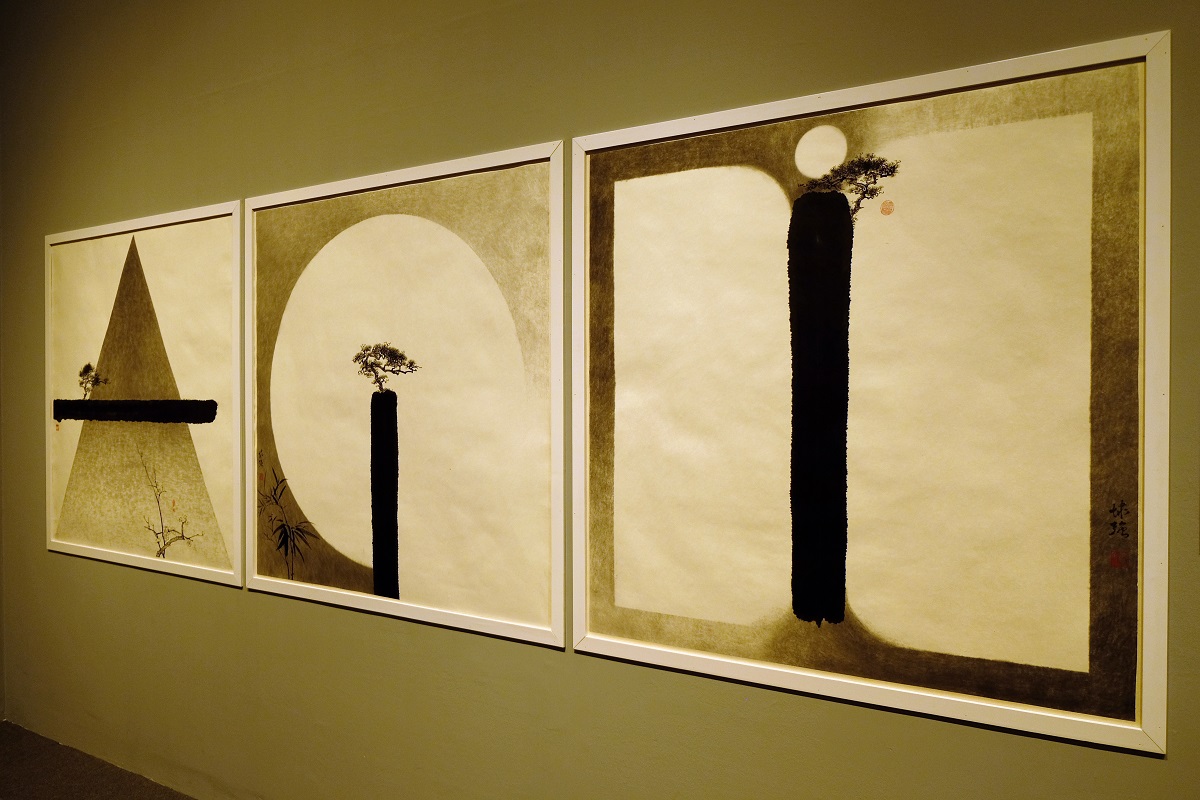 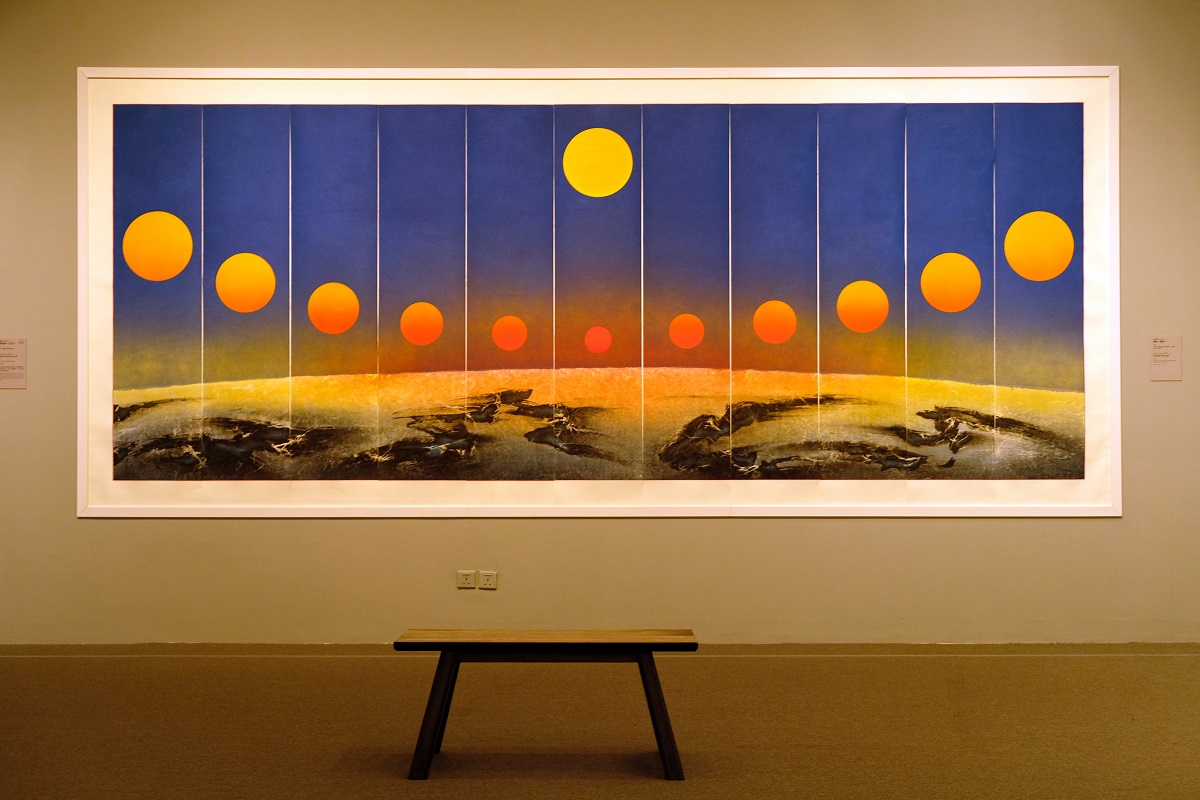 Antonio Mak Hin-yeung’s Man Coming Out from Himself I

Visual stories of Hong Kong’s past

One of the oldest paintings of Hong Kong, depicting a waterfall on the western coast of the island

Xu Bing’s A Book from the Sky

A corner dedicated to artwork by Kwok Mang-ho, also known as the Frog King

Some of Rosanna Li’s pottery figurines

Victor Wong’s Since the Beginning

Wong Chung-yu’s The More I Am Recharged, the More Hungry I Am 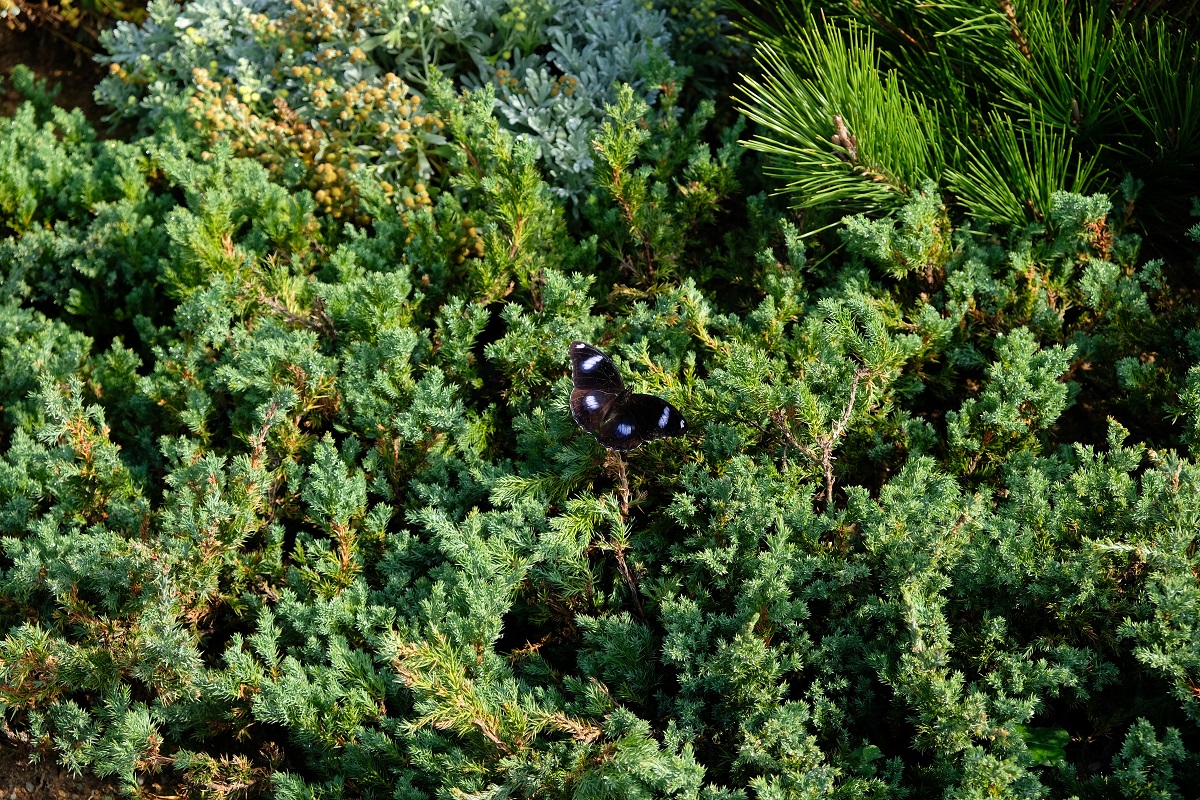 Natural beauties outside the museum

62 thoughts on “A Quiet Comeback”