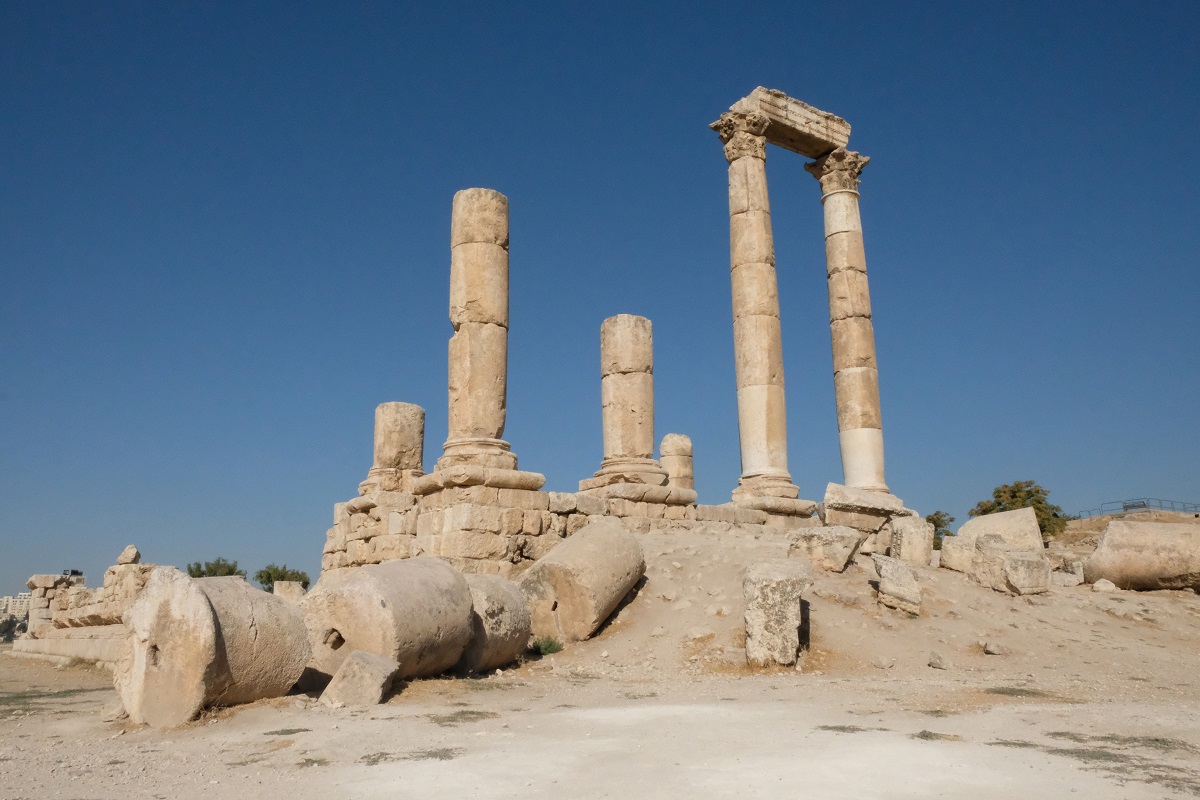 In the desert landscape of Wadi Rum, when James and I were sitting in the communal space near our tent to wait for dinner, we spoke to a German man who with his wife and two daughters were also on holiday. We were talking about Lebanon, among other things, and the small country’s remarkable beauty.

“Someone also told me how amazing Lebanon is,” the German father said to us. “But we decided to choose Jordan because we feel it’s safer for small children.”

Aman is the Indonesian word for safe or secure, and that’s exactly what I felt throughout our stay in the kingdom. In Amman, I constantly felt aman; the car drivers were far less aggressive than those in Beirut, and despite the crowds and rather chaotic atmosphere of the Downtown area in east Amman where our hotel was located, I never experienced any sense of danger at all. Probably the most threatening thing Jordan faces is in fact the lack of water as it is among the world’s most water-scarce countries, a condition due to this land’s hot and mostly arid climate.

However, in spite of this seemingly hostile setting, Amman has been inhabited for millennia by different nations and conquered by a multitude of foreign powers. In the 13th century BC, the Ammonites – an ancient Semitic-speaking people who settled in the east of the Jordan River – established the capital of their kingdom in Rabbath Ammon which over time, including a period in history when the Assyrian Empire and subsequently the Persian Empire took control, became known simply as Ammon. When this land was occupied by the Hellenistic Ptolemaic Kingdom based in Alexandria, Ammon was renamed Philadelphia, after Ptolemy II Philadelphus, the pharaoh of the conquering kingdom.

The Greeks ruled this arid Levantine region for centuries until the advent of the Romans who would then control vast swathes of land from Europe to Africa and Asia. As Christianity rose to prominence, Philadelphia became part of the Byzantine Empire, before being taken over by the Rashidun Caliphate – the first Islamic caliphate – who changed the city’s name into Amman. Centuries later the Muslims experienced a setback when parts of the Levant fell under the control of the Crusaders, although in the 12th century Amman was recaptured by the Muslims (this time the Ayyubids). From the late 13th century, Amman and much of the Levant was under the rule of the Mamluks of Egypt until the 16th century when Egypt was conquered by the Ottomans of Turkey.

Vestiges of the Roman period in Amman 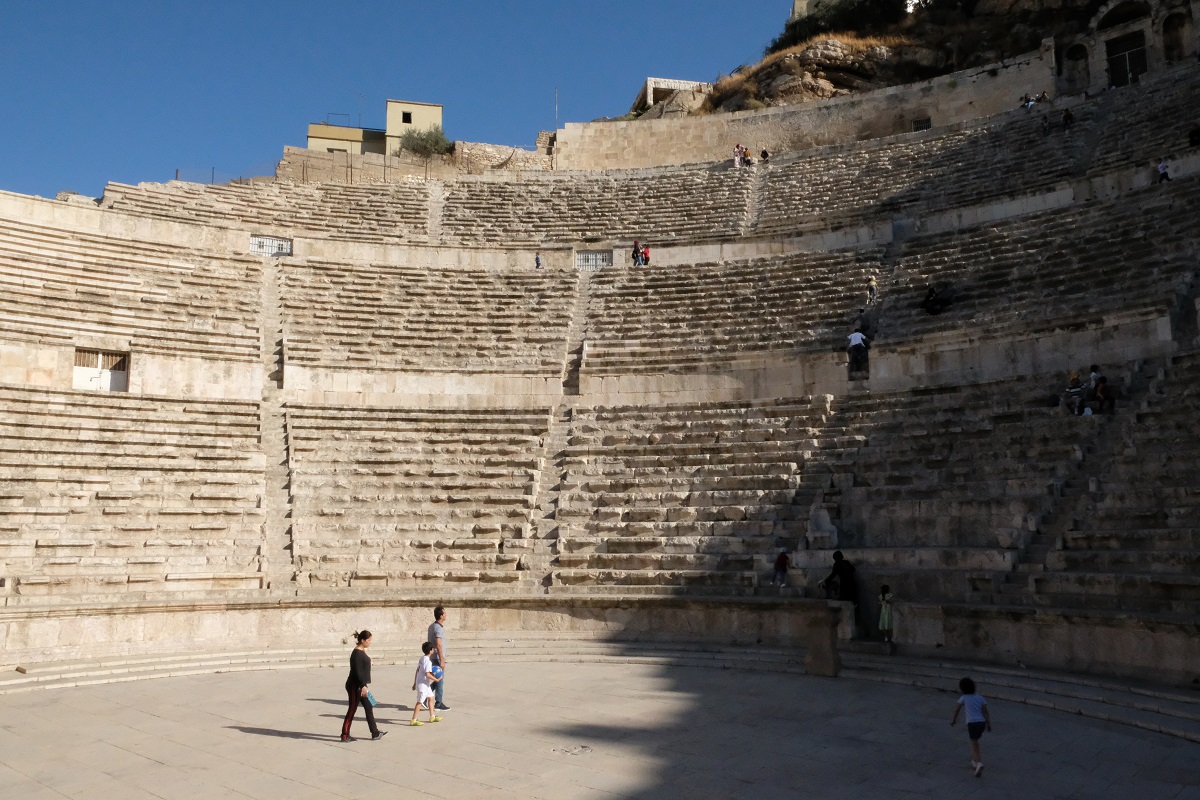 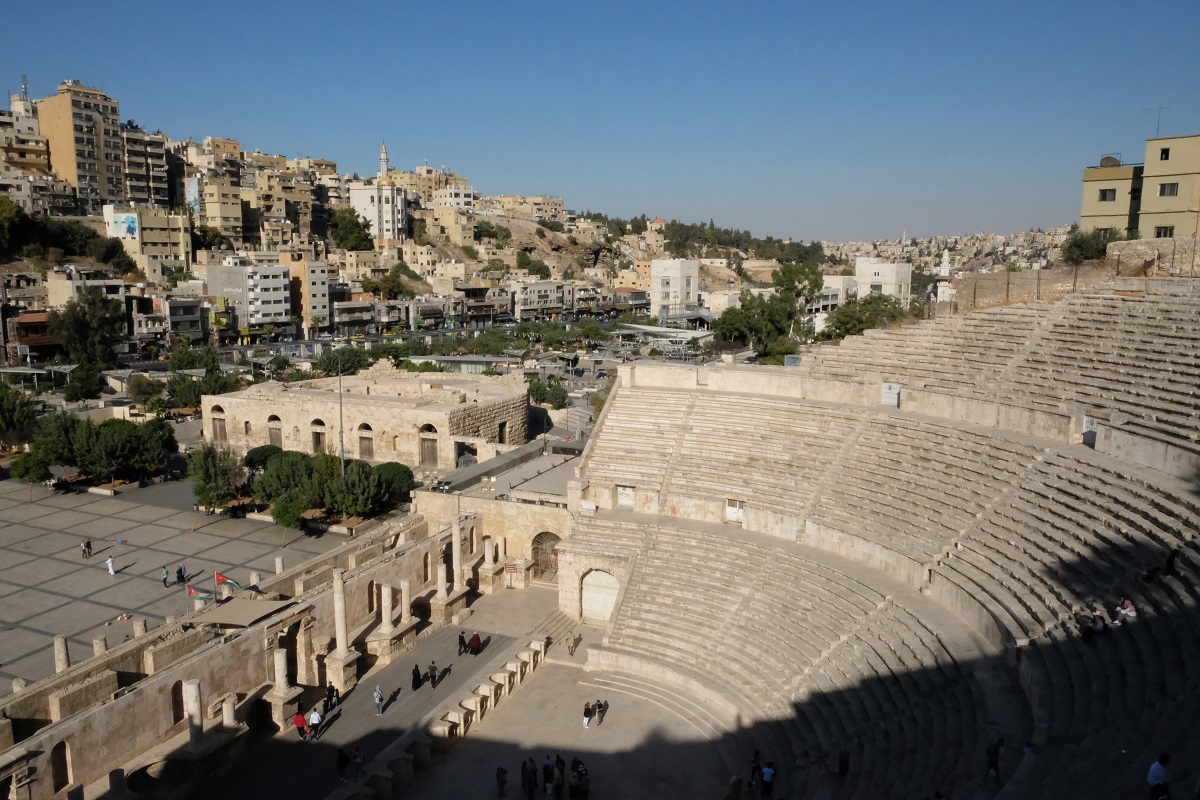 Ancient Greek script – a reminder of the city’s Hellenistic period

The nymphaeum (public water fountain), built around the same time as the Roman theater 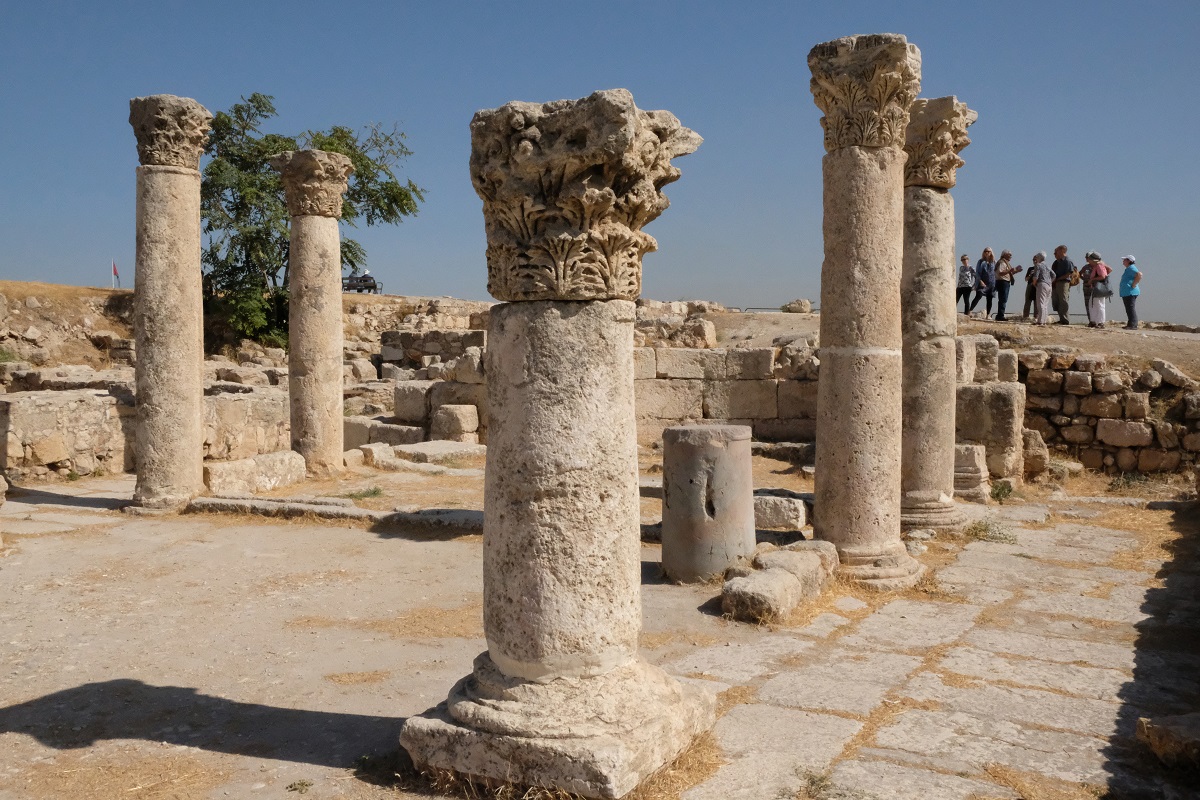 Remnants of a sixth-century Byzantine church at Amman Citadel

On the brink of World War I, which pitted the Central Powers (of which the Ottoman Empire was a part) against the Allied Powers (with the British Empire as one of its members), the British saw an opportunity to forge an alliance with the Arabs – who for long were suppressed under the Turks – to defeat the Ottomans. The Hashemites, a dynasty who ruled Mecca – the holiest city in the Islamic world – until its takeover by the Saudis in 1924, became a key ally for the British during the Arab Revolt which contributed to the weakening grip of the Ottomans in the Levant. Eventually, following the conclusion of World War I, the Ottomans relinquished control of much of their former territories, effectively giving way to European powers – chiefly Britain and France – to dominate the politics of a region that constitutes the modern states of Syria, Lebanon, Israel, Palestine, and Jordan (as well as Iraq and Kuwait further east, and Egypt further south).

During the British mandate period, the Emirate of Transjordan was established to the east of the Jordan River which enjoyed a greater degree of autonomy than the region to the river’s west. In 1946, the British finally granted independence to the emirate which then changed its official name into the Hashemite Kingdom of Transjordan, shortened to “Jordan” a few years later. On the other side of the river, the situation was far more complex. The British Mandate of Palestine was due to expire on May 14, 1948. This prompted the United Nations to adopt a resolution six months earlier which provided the blueprint for a partition of the mandate territory in two: a Jewish state and another one for the Palestinian Arabs. This sparked outrage in the Arab world, and six months later Israel declared its independence which was met with military intervention by a coalition of Arab forces the following day. The war ended 10 months later in March 1949, resulting in the Israeli occupation of almost 60% of the proposed area for the new Arab state, as well as the annexation of the Gaza strip by Egypt and the West Bank by Transjordan.

In the following decades, tensions between Israel and its neighbors (mainly Jordan, Egypt and Syria) remained high. Then, in 1967, another war between the two sides broke out, ending just six days later with a humiliation for the joint Arab forces: Israel managed to capture the Sinai peninsula from Egypt, the Golan heights from Syria, and the West Bank from Jordan. The latter forced around 300,000 Palestinians to seek refuge to the east of the Jordan River. However, it wasn’t only the civilians who fled to Jordan. The Palestinian Liberation Organization (PLO) and its fighters resettled in Jordan and established new bases in the kingdom from which they launched attacks on Israeli-occupied territories. At first, Jordan tolerated the Palestinians. However, as PLO’s strength grew, effectively making the PLO a state within a state, factions within the organization began to instigate the overthrow of the Hashemite dynasty.

The Jordanians eventually ran out of patience, and finally in September 1970, King Hussein of Jordan ordered the country’s army to drive the fedayeen (PLO fighters) out of the kingdom. Cities with a heavy PLO presence were targeted, including the capital Amman. A few months afterward, the fedayeen surrendered and left Jordan for Lebanon where many of them settled in the southern part of the latter which had traditionally been the home of the Shia Muslims. This created communal frictions which contributed to a chain of events that led to the outbreak of a deadly civil war that engulfed Lebanon from 1975 to 1990.

Inside the grand entrance to the palace

The palace’s cistern, located next to the monumental gateway

Looking at the present through the ruins of the past

The Jordan Museum, the biggest museum in the country

This gleaming stone-clad museum was built in 2014 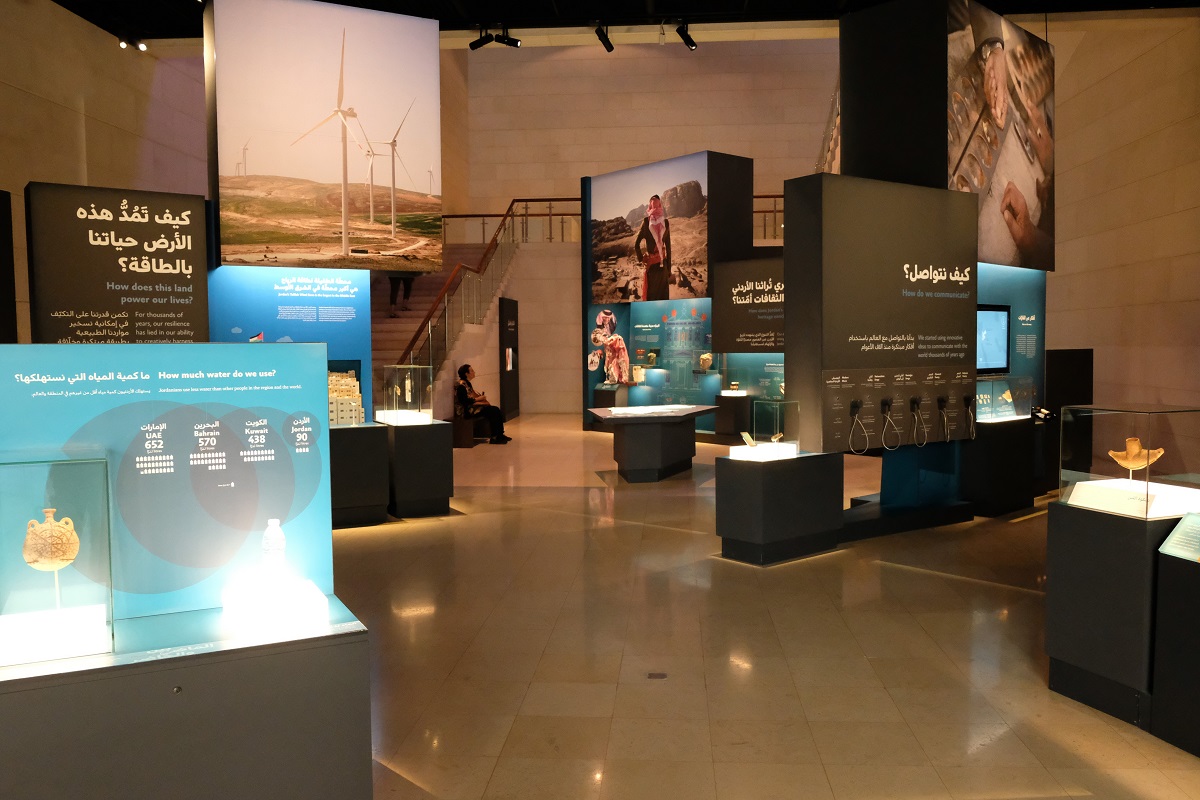 Inside the Jordan Museum

Fragments salvaged from a first-century Nabatean temple, now on display in the Jordan Museum

In the decades that followed, Jordan repositioned itself not as an instigator of war, but rather an oasis of peace and stability in a highly tumultuous region. During the Gulf War, many Palestinians who lived in Kuwait fled to Jordan and settled in cities across the country, including Amman. It was both an obvious and a sentimental choice as Jordan is a place that is closest to their ancestral land which also happens to provide a sense of safety for them. A place where they felt aman. Among these Palestinians were the parents of Rania Yasin who would later marry Prince Abdullah – the then crown prince of the Hashemite dynasty – to eventually become Queen Rania. More than a decade later, when civil war broke out in Syria, yet again Jordan became one of the primary destinations for Syrian refugees who fled home to find safety. To date, the terrorist bombings in 2005 are so far the only time in recent decades when Amman faced a dire security situation.

In early October 2019, James and I, two tourists from a city 8,600 kilometers away from Amman found ourselves wandering around the Jordanian capital’s bustling streets and sidewalks, alongside hundreds or even thousands of other foreign tourists who were captivated by beautiful photos and intriguing stories about this city and other places throughout the kingdom. Jordan is our second Middle Eastern country after Lebanon, and I couldn’t help but compare Amman with Beirut to see how similar or different things were in both places. Compared to the Lebanese capital, Amman’s terrain is more hilly, covered with endless low-rise buildings stretching out as far as the eye can see. Like Beirut, there are parts of Amman where modern skyscrapers ostentatiously rise from a sea of monotonous structures around it. However, unlike cosmopolitan Beirut, Amman feels more laid-back and provincial, as if it was actually a supersized small city.

In the end, I concluded that Amman has its own magic, in a way that can’t necessarily be compared with the more worldly charm of Beirut. The Jordanian capital boasts a sumptuous yet semi-casual dining venue (I believe only one of many) which serves traditional Jordanian as well as Palestinian cuisine in an elegant, period setting. But the amazing flavors of Jordanian dishes can also be found at much more modest establishments that made me realize how underrated this nation’s food really is (which requires a post on its own). The most bewildering, and probably the strangest, thing about Amman, however, is the fact that it has a split personality embodied by old, historic east Amman and its modern and greener western counterpart, separated from each other by an invisible line.

When night fell, the streets around our hotel became even livelier. Men, women, boys, girls, all seemed to enjoy an evening stroll when the oppressing daytime heat was replaced by comfortable, temperate dry air as the color of the sky slowly changed from magenta to dark purple before eventually turning into deep blue. On the sidewalk, small kiosks selling books were a refreshing sight in a time when online newspapers and e-books have been embraced by much of the world. Around dinner time, people on the street holding plates with big slices of knafeh (a traditional Middle Eastern dessert made with pastry or semolina dough, soaked in sweet syrup and layered with cheese with sprinkled pistachios on top) savored its rich, indulgent flavors while exchanging stories with their friends. The dessert’s layers are like the layers of history of Amman, which make it even more intriguing because they’re piled on top of each other, instead of being separate from one another. And the sugary syrup oozing from a slice of knafeh is like an allegory of Jordan’s position as an oasis in this volatile corner of the world, always ready to share its sweetness with those in need. 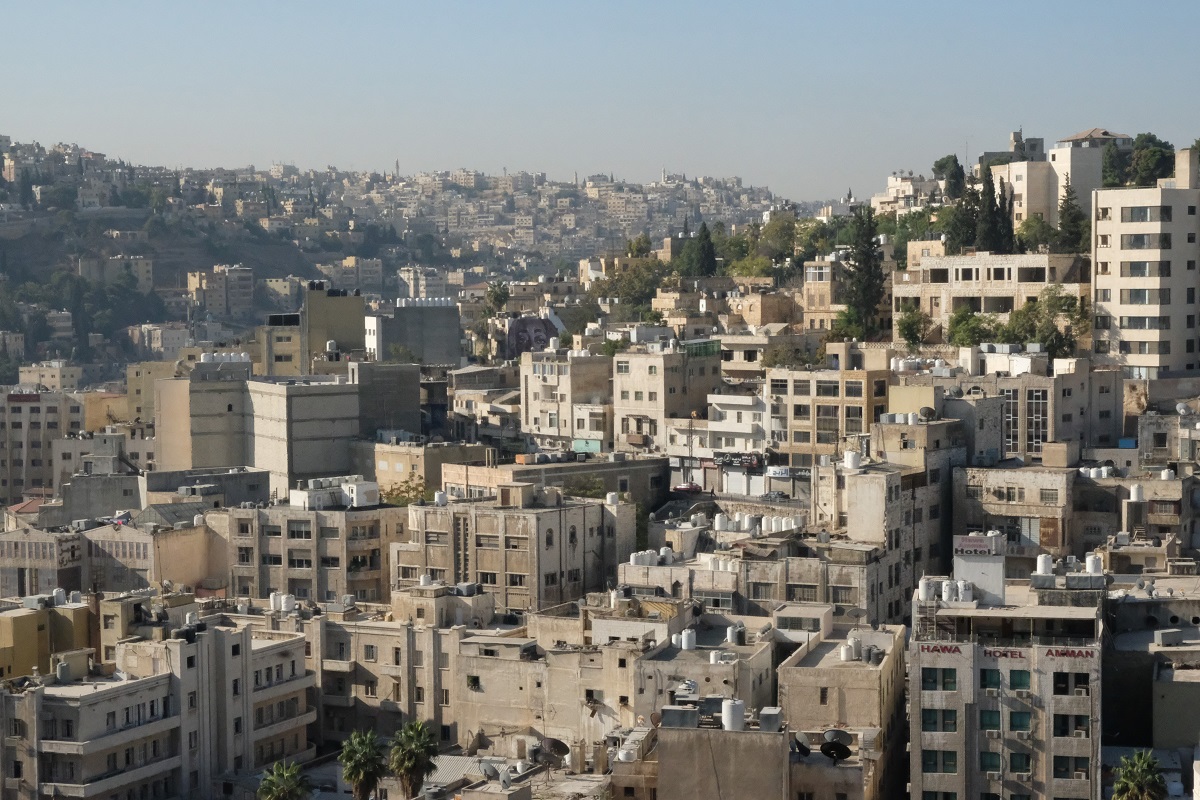 Near Rainbow Street, a popular hangout in west Amman

Sufra, a culinary institution and one of Amman’s modern treasures

Inside Sufra, an old villa turned into an upscale Jordanian restaurant

Back to the Downtown area in east Amman

A photogenic alley in Amman 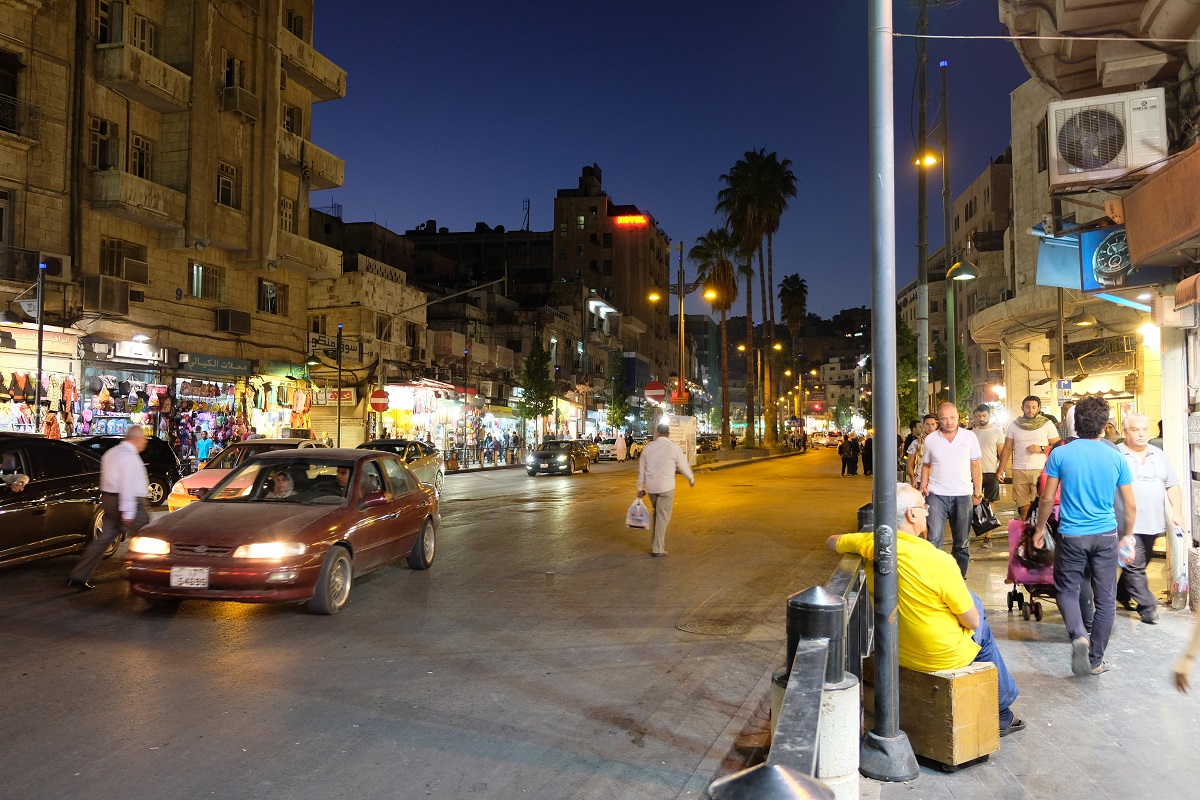 Life in the city when night falls

One of many book kiosks strewn across Amman

42 thoughts on “Amman’s Layers of History”