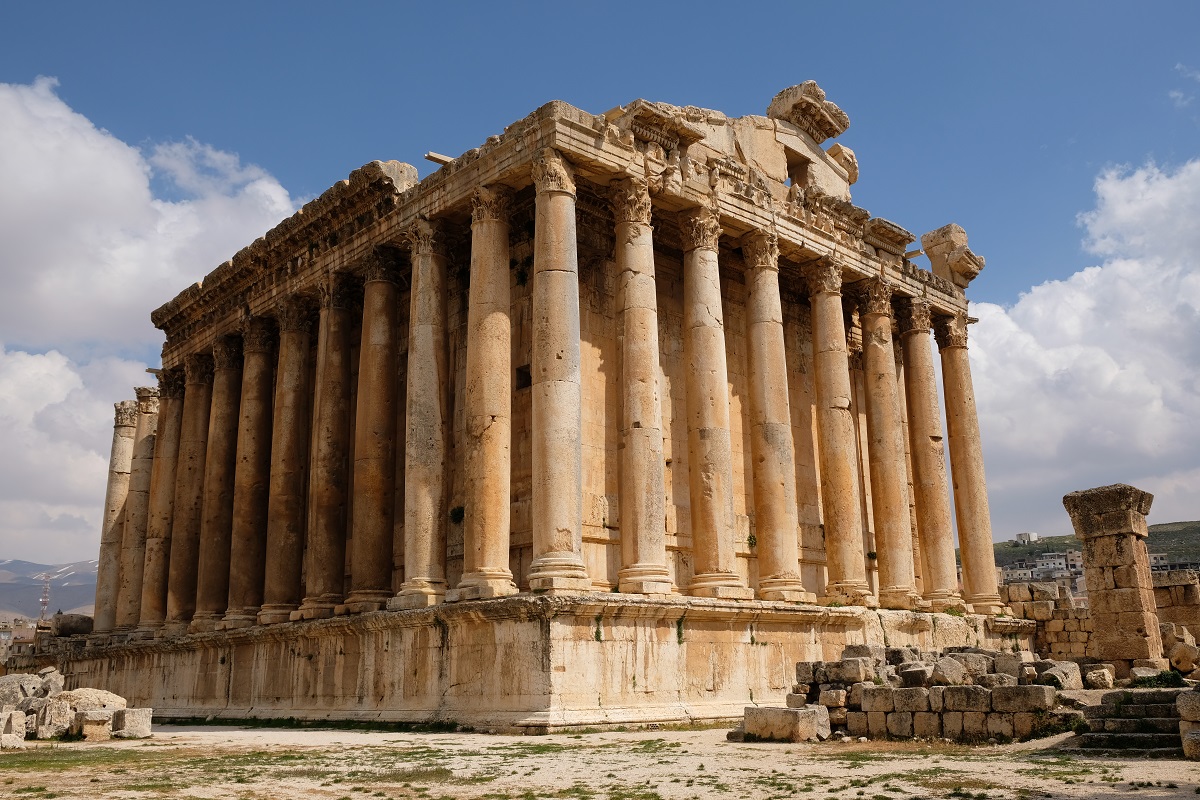 The Temple of Bacchus

Day two in Baalbek, and we are awakened after a night-long power cut. It turns out that in this part of Lebanon this disruption in daily life happens more often compared to Beirut. Back in the Lebanese capital we were told that regular blackouts were the result of the unwillingness of the Ministry of Finance to provide a budget for the Ministry of Energy – they’re probably from two opposing political forces which happen to form the current government. But that’s politics in Lebanon, and it’s not surprising that many Lebanese blame politicians for a lot of problems in their country. However, with the spectacular Roman ruins of Baalbek just across the road from our hotel, we’re not complaining.

After breakfast we leave our hotel and walk toward the same entrance gate to the ancient temple compound that we went to the previous afternoon, though the weather now is slightly hazy. Unusually for a Roman site, the history of Baalbek is not well-documented, leaving scholars to assemble pieces of the puzzle about this place over generations. Nevertheless the consensus is that Baalbek was once dedicated to the Semitic god Baal-Haddad (the name Baalbek means Baal or Lord of the Bekaa), who from the Greek perspective is comparative to the sun god Helios, after which this city in modern-day Lebanon was then named: Heliopolis. Over the time the god was also associated with Zeus Helioupolites, an epithet of Zeus. When the Romans conquered this land, they built a temple for their equivalent to Zeus: Jupiter.

The Roman Era in Baalbek began when Pompey occupied the Beqaa in 64 BC, with successive Roman emperors further promoting Romanization of the valley and the former Phoenician coastal cities including what is now Beirut. In 30 BC Augustus took control of the region, and upon realizing Baalbek’s strategic position as a religious center along an ancient trade route, in 16 BC he instructed the veterans of Roman legions in Beirut to settle in Baalbek. It was around this period of time that the construction of the Temple of Jupiter is believed to have started. What followed in the coming centuries was the expansion of the temple compound to eventually become the largest such example of religious architecture in the entire Roman world.

On our first day in Baalbek, we marveled at the remains of this great achievement, so spectacular I used up all of my three memory cards to take photos of this incredibly detailed and beautiful UNESCO World Heritage Site. This morning, we decide to take a slightly different route to explore the ruins: through the staircase leading to the propylaea (monumental gateway) to the Great Courtyard. To think that this is only a portion of what the grand staircase used to look like is mind-boggling, but really, anything within this magnificent compound would make one feel small and insignificant. We continue to the Hexagonal Courtyard, a feature not shared with other Roman temples, indicating an Oriental influence during the design stages of this temple. Facing this part of the structure is the Great Courtyard, containing the original altar of sacrifices which was preserved by the Romans. At the end of the courtyard is the Temple of Jupiter, which under the rule of Theodosius (a Roman emperor in the fifth century AD when Christianity had become the official religion of the empire) was partially torn down to build a basilica in the Great Courtyard dedicated to Saint Peter. It is also believed that some columns were transported to Constantinople to build the Hagia Sophia.

What remains of what was once a great temple are a few colossal standing columns, the grand staircase, and scattered stone blocks. However, one only needs to see what’s directly to its south to imagine the scale of the temple before it succumbed to plunder and earthquakes. The Temple of Bacchus was commissioned by Antonius Pius, the Roman emperor throughout the mid-second century AD, as an addition to the Temple of Jupiter. Despite being smaller than its predecessor, the Temple of Bacchus is still an enormous structure – it’s slightly bigger and more than twice as tall as the Parthenon in Athens. Climbing its steps makes me think of how it must have felt like for the locals when they entered this architectural marvel almost two thousand years ago to worship. 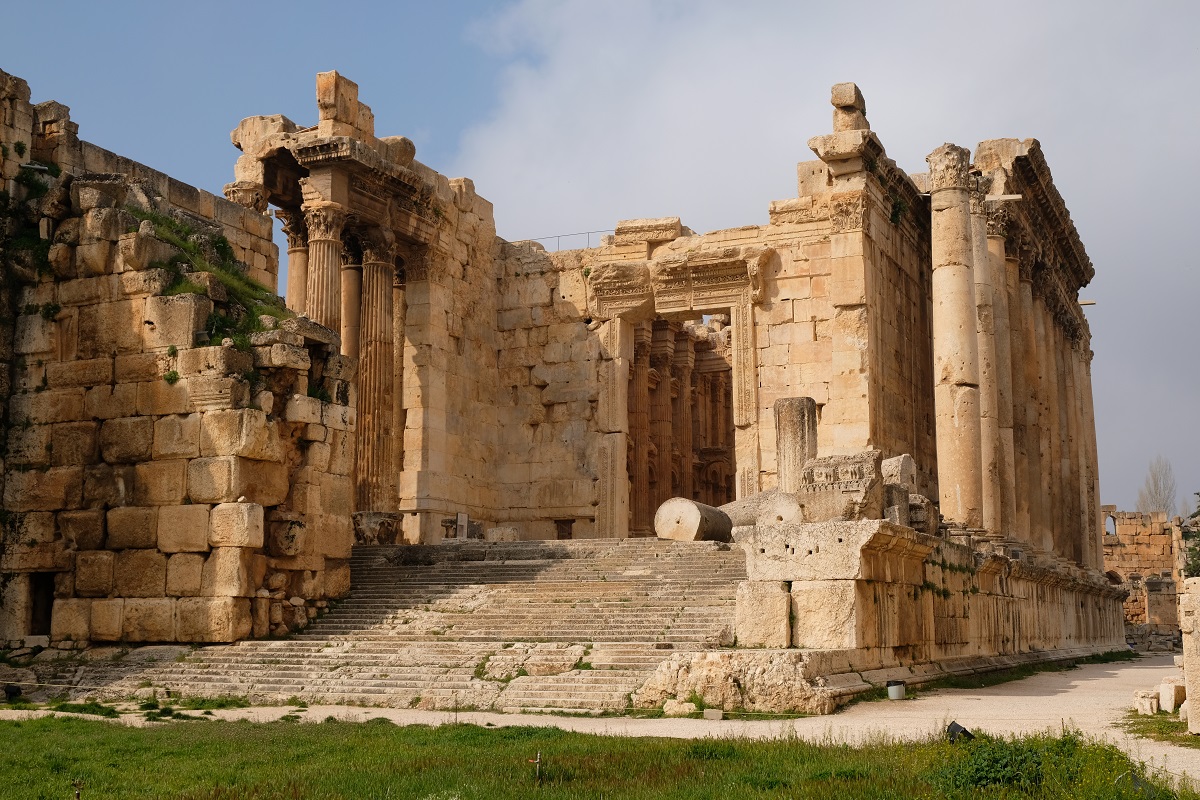 Entering the Temple of Bacchus from the south 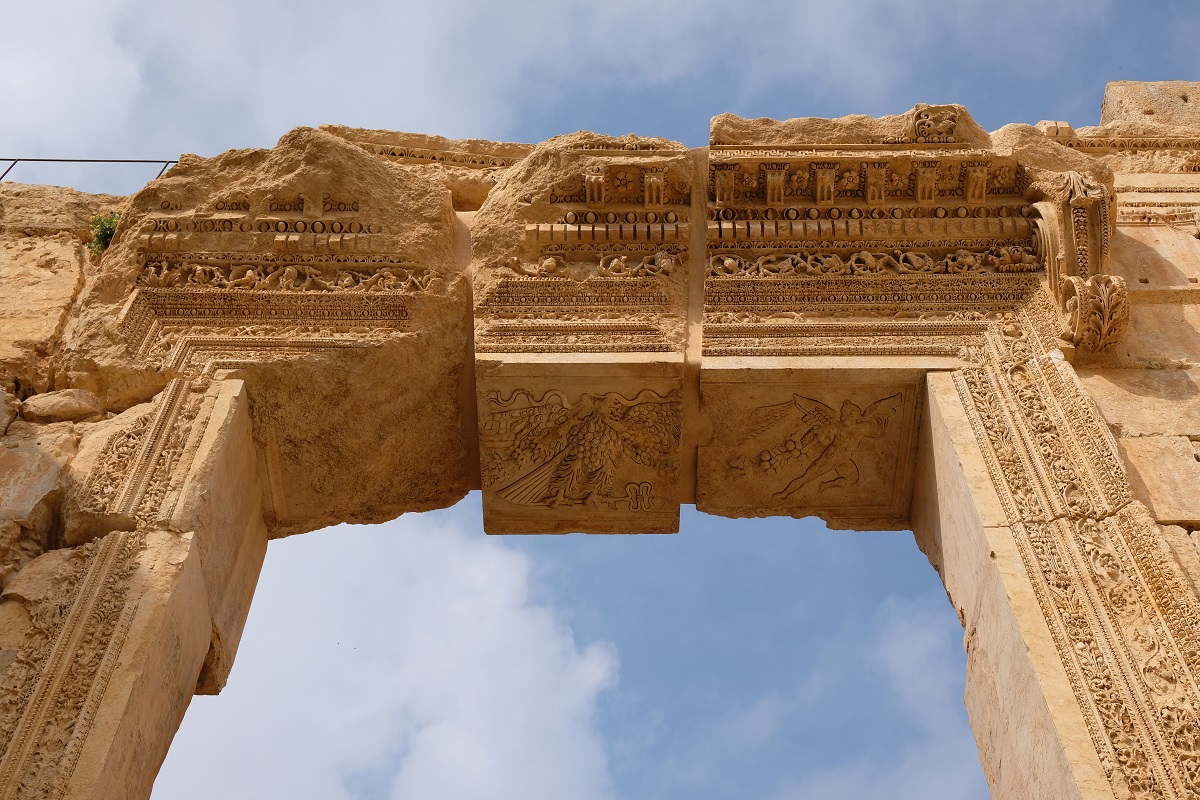 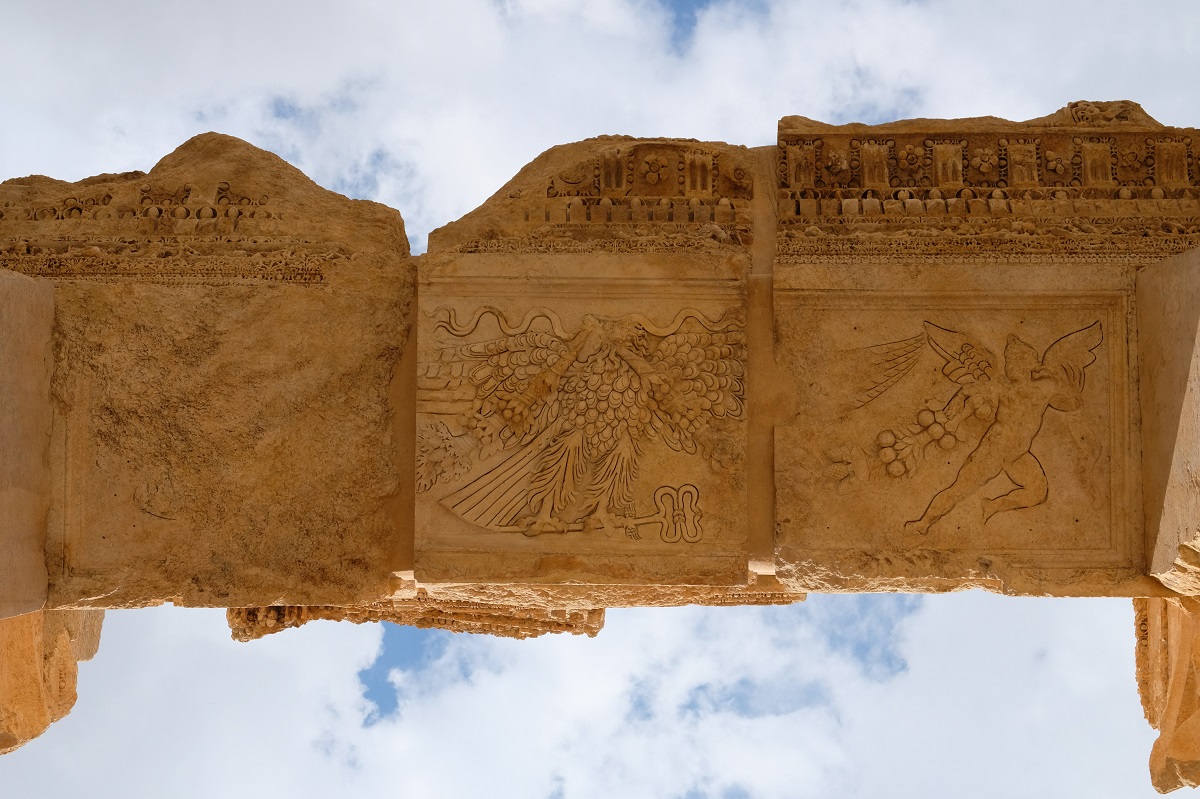 Symbols of Jupiter, Mercury and Venus 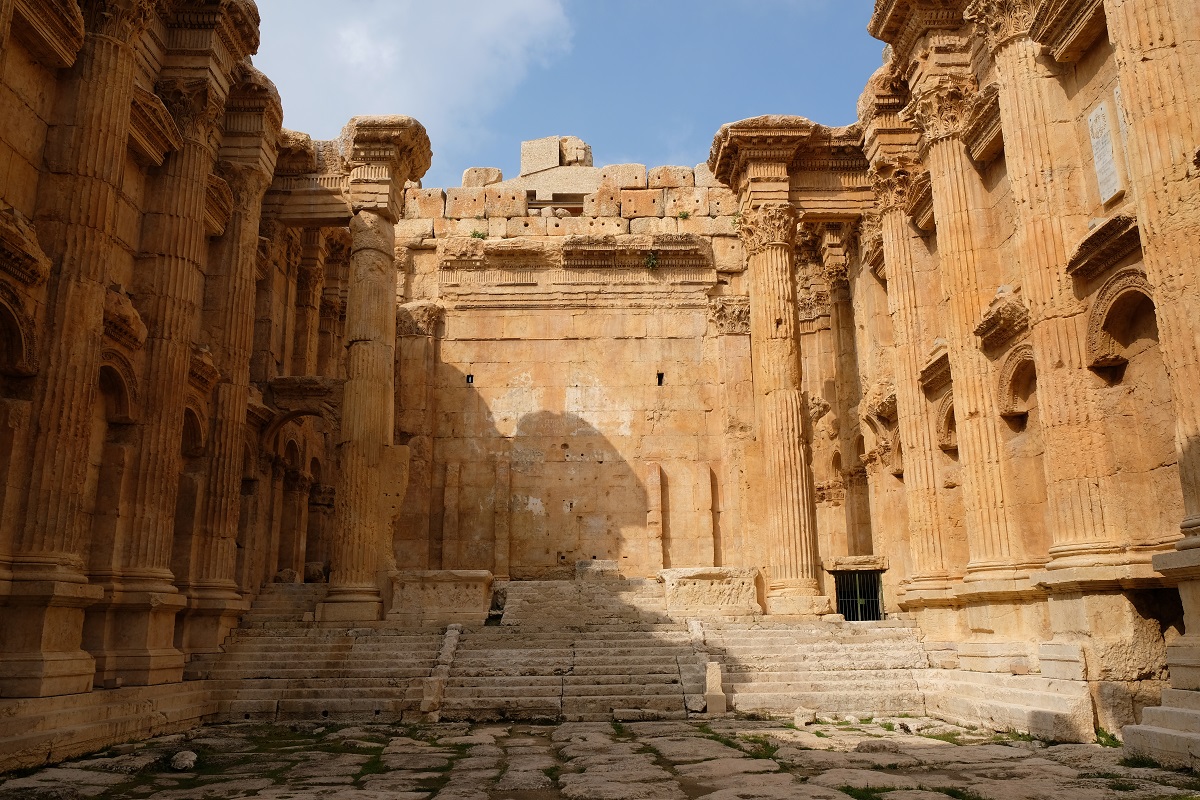 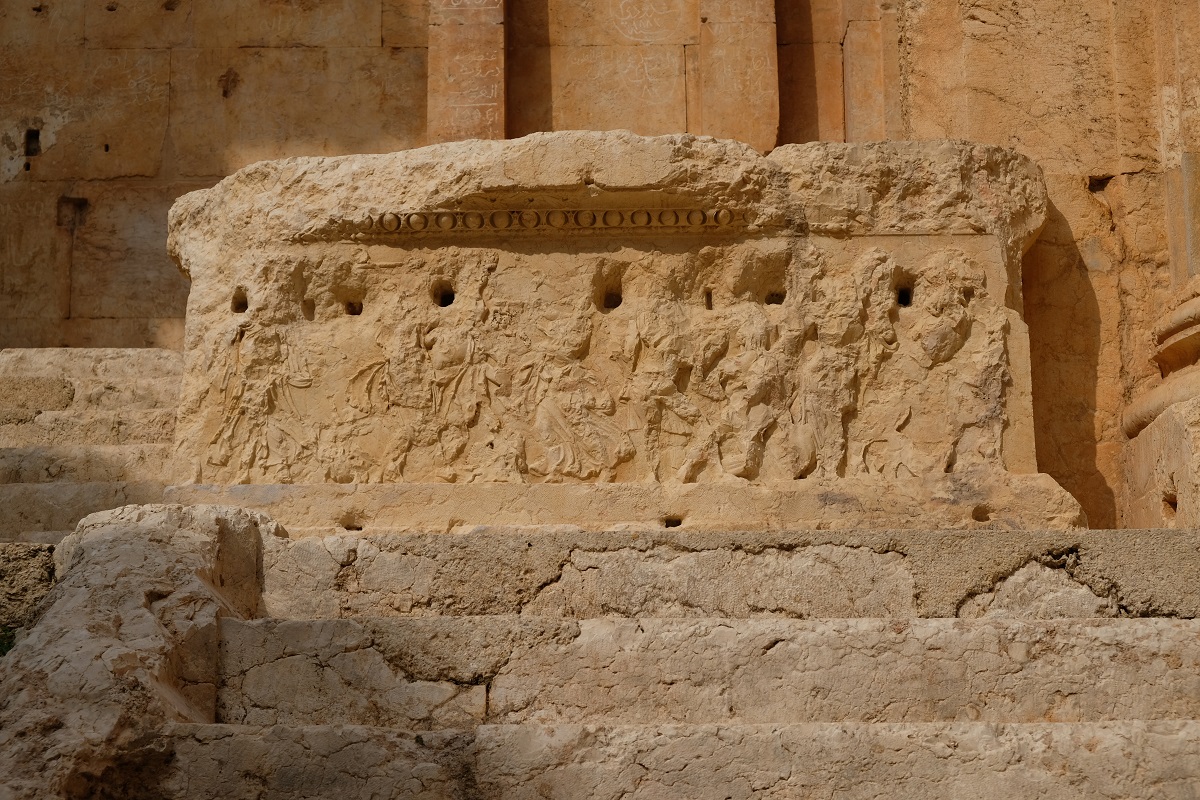 One of the main altars with depictions of Bacchus 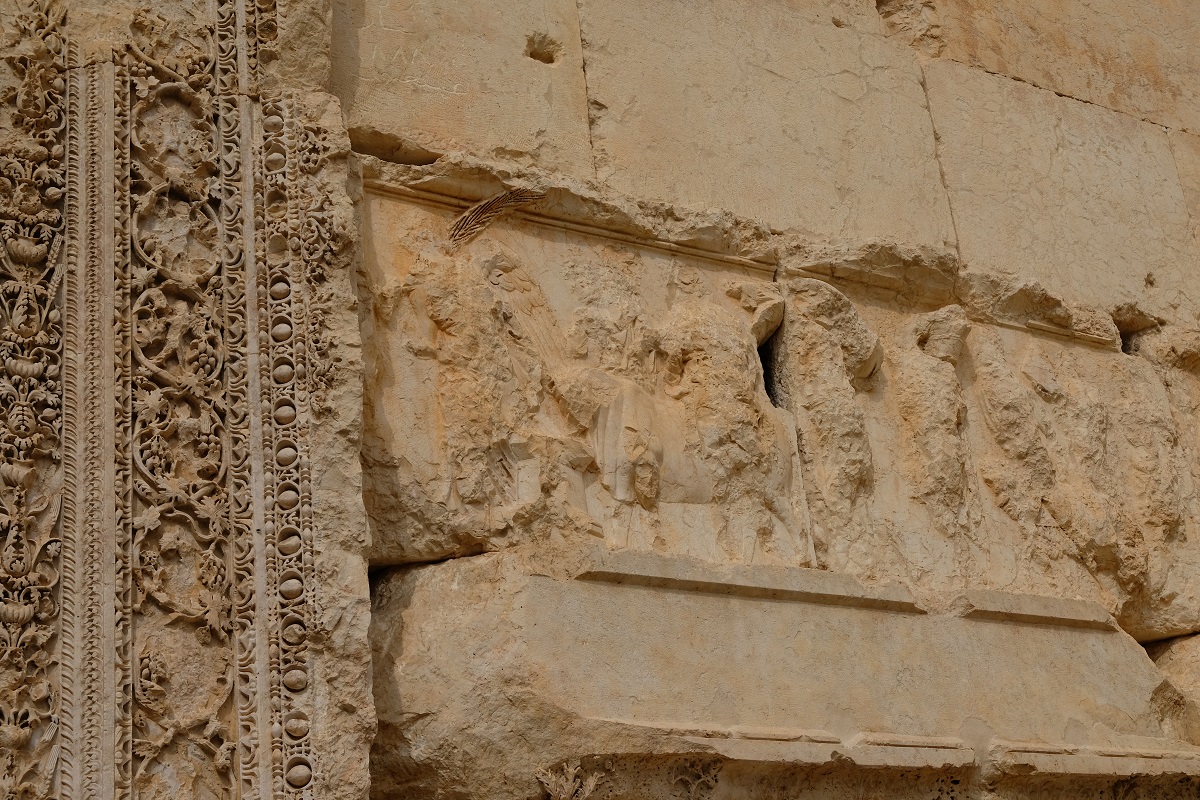 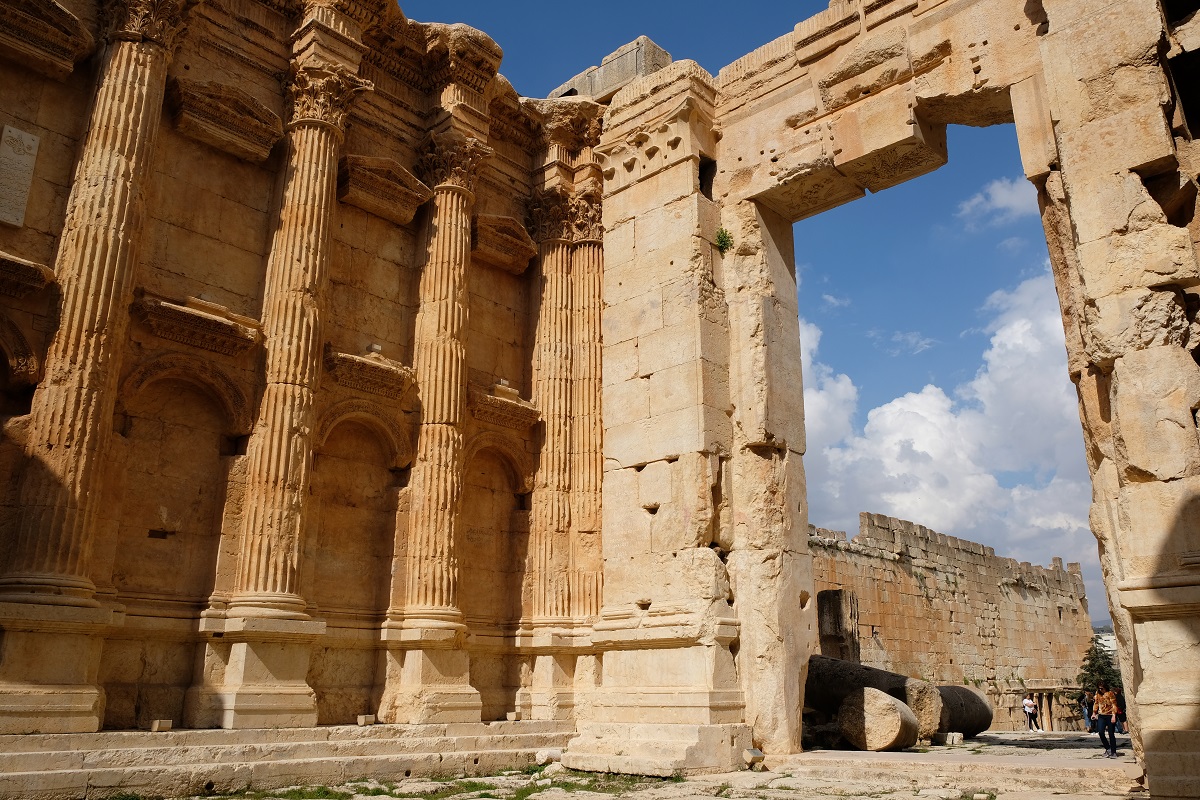 Corinthian columns inside the temple 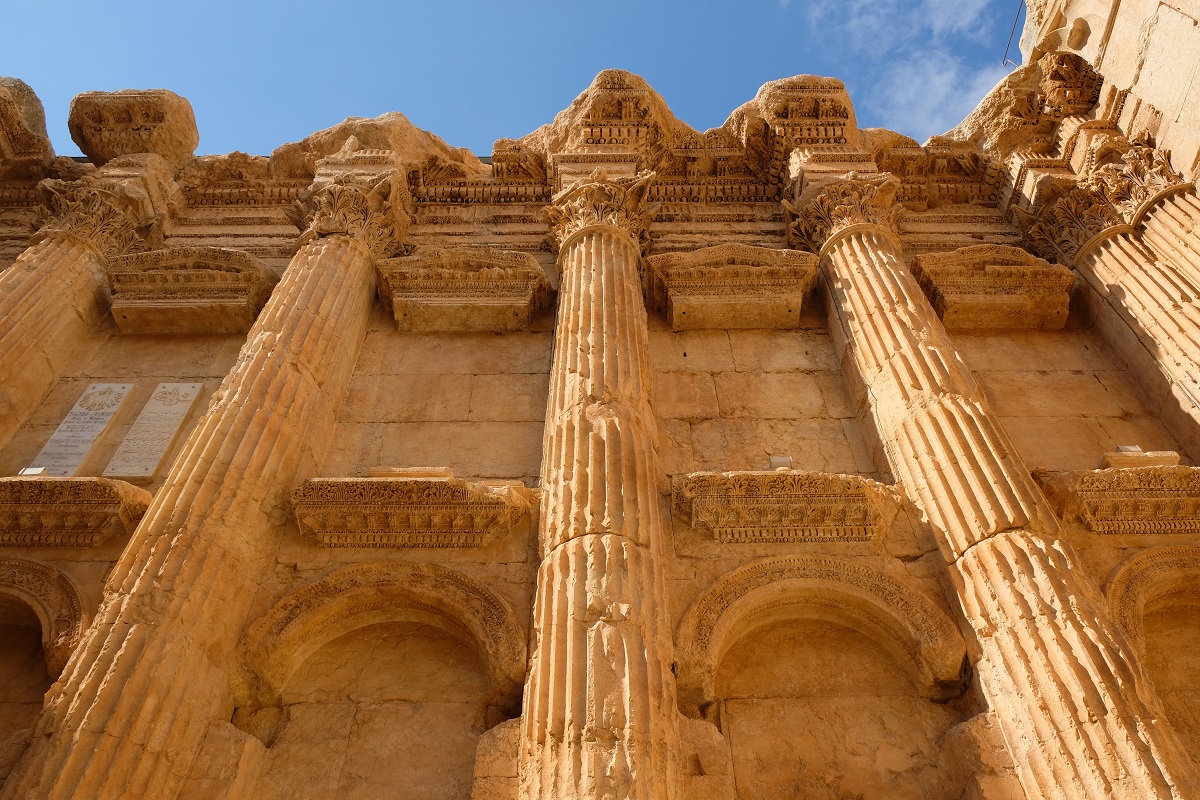 Made by the finest sculptors almost two thousand years ago 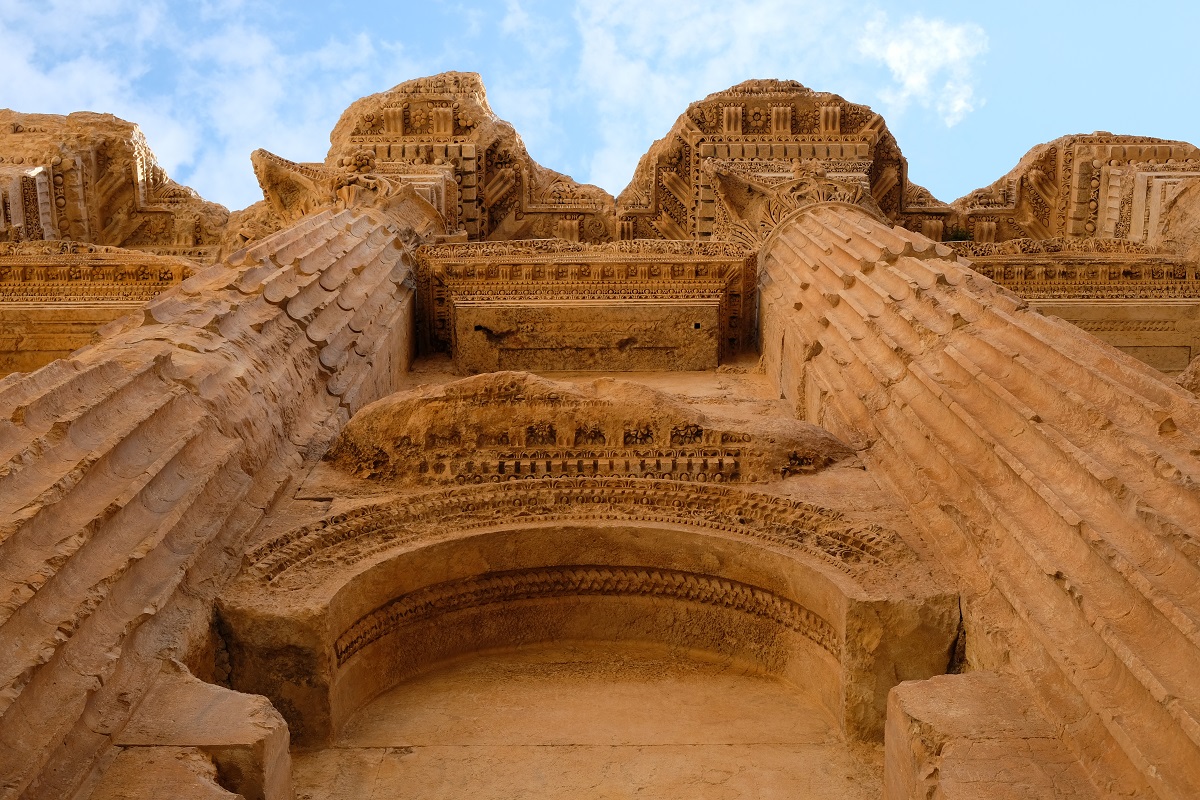 Statues once adorned these niches 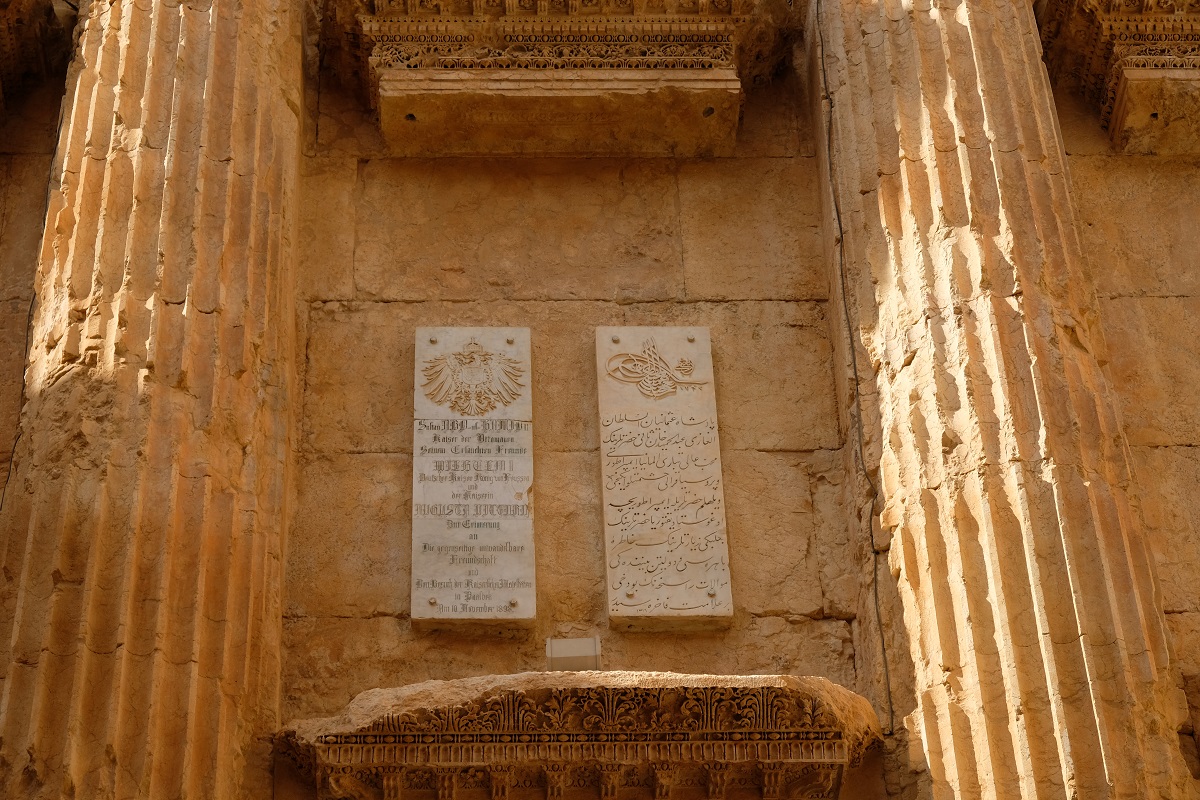 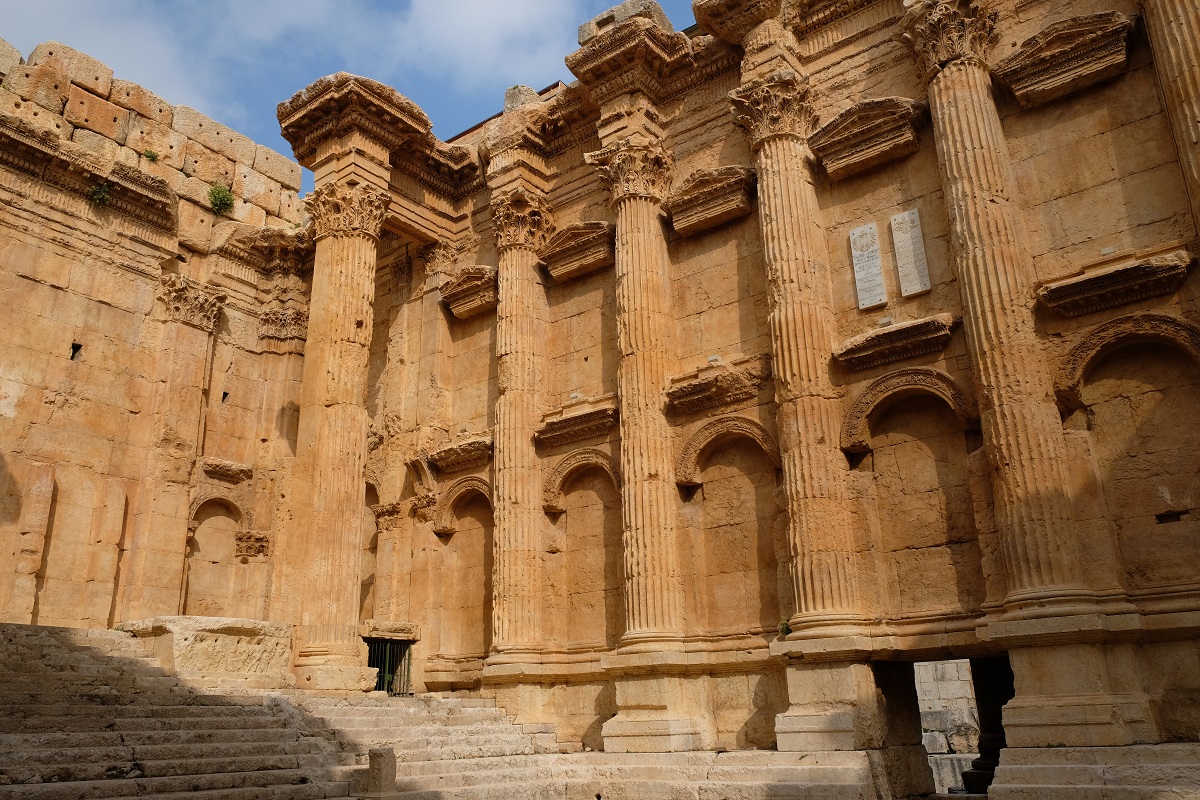 The small door on the left leads to underground vaulted chambers

Carved underneath the lintel of the monumental doorway of the Temple of Bacchus are the symbols of Jupiter (an eagle with its wings outspread and its beak holding stalks of wheat), Mercury (a winged caduceus), and Venus (two cupids). Meanwhile, the ceiling of the temple’s peristyle is adorned with images of Pax (goddess of peace), Ceres (goddess of agriculture, grain crops, fertility and motherhood), Vulcan (god of fire, metalworking and the forge), Fortuna (goddess of luck), Diana (goddess of the hunt, wild animals and the Moon), Victoria (goddess of victory), Mars (god of war), as well as depictions of the abduction of Ganymede, Medusa and her hair of snakes, and Cleopatra stung by a snake.

However, it is Bacchus, the Roman god of the vine, grape-harvest, wine-making, wine, ritual madness, religious ecstasy and theater, that the temple is believed to have been dedicated to. This is attributed to the reliefs at two altars inside the temple where Bacchus is depicted as a child. It took many years and different emperors to finish the construction of the Temple of Bacchus, but as Christianity rose to prominence in the Roman empire in the fourth century AD, this temple would soon be abandoned. In 635, the Muslim army of the first Islamic caliphate conquered Baalbek. In subsequent decades and centuries, not only did different Muslim rulers control this former Roman city, including the Damascus-based Umayyads, Baghdad-based Abbasids, and Cairo-based Fatimids, but so did the Byzantines in the late 10th century.

In 1075, when Baalbek was ruled by the Isfahan-based Seljuks, its fortification wall was strengthened and the transformation of the former Roman temples into a citadel began, thanks to the enmity between the Muslim dynasty and the Crusaders. When the Levant (including Baalbek) changed hands and fell under the domination of the Ayyubids – a Kurdish Muslim dynasty – the local emir of Baalbek commissioned the construction of what is now called the Ayyubid South Tower at the left part of the grand staircase of the Temple of Bacchus which functioned as part of the citadel’s fortification, and later a palace under the Mamluks of Egypt. While facing the Crusaders on the western front, an unexpected adversary advanced from the Far East. In 1260 the Mongols invaded Syria and destroyed Baalbek, but in the same year the Mamluks managed to defeat them and retake the historic city.

Almost three centuries later, Baalbek fell to the Ottomans, and during their rule European tourists began visiting the Roman ruins, although it took several more centuries before modern scientific excavation was commenced by Kaiser Wilhelm II of Germany in 1901 following his visit to the ruins on his way to Jerusalem. Following the Ottomans’ defeat at the end of World War I, Turkey had to surrender its possessions in the Levant to France. It was during the European power’s mandate that periodical excavations continued, and subsequently since Lebanon’s independence all archaeological works have been carried out by the Lebanese Department of Antiquities. In spite of the civil war that had engulfed this small Middle Eastern country since the 1970s, the Roman ruins of Baalbek were inscribed as a UNESCO World Heritage Site in 1984, although the beginning of restoration work had to wait for a few more years when the war officially ended.

Today, in a time of relative peace and calm, Baalbek once again attracts visitors from all over the world to marvel at the ruins’ stunningly detailed carvings, imposing structures, and the majestic snow-capped backdrop on the horizon in both east and west. Most people go here as a day trip from Beirut, and this is even more apparent as we’re the only people standing inside the Temple of Bacchus this very morning on our second day in the Beqaa Valley. This sanctuary might have been dedicated to the Roman god of ritual madness and religious ecstasy, but at this tranquil moment neither of those things are on my mind. Only a deep admiration for the visionary architect, as well as the highly-skilled sculptors and engineers who made this architectural wonder possible. 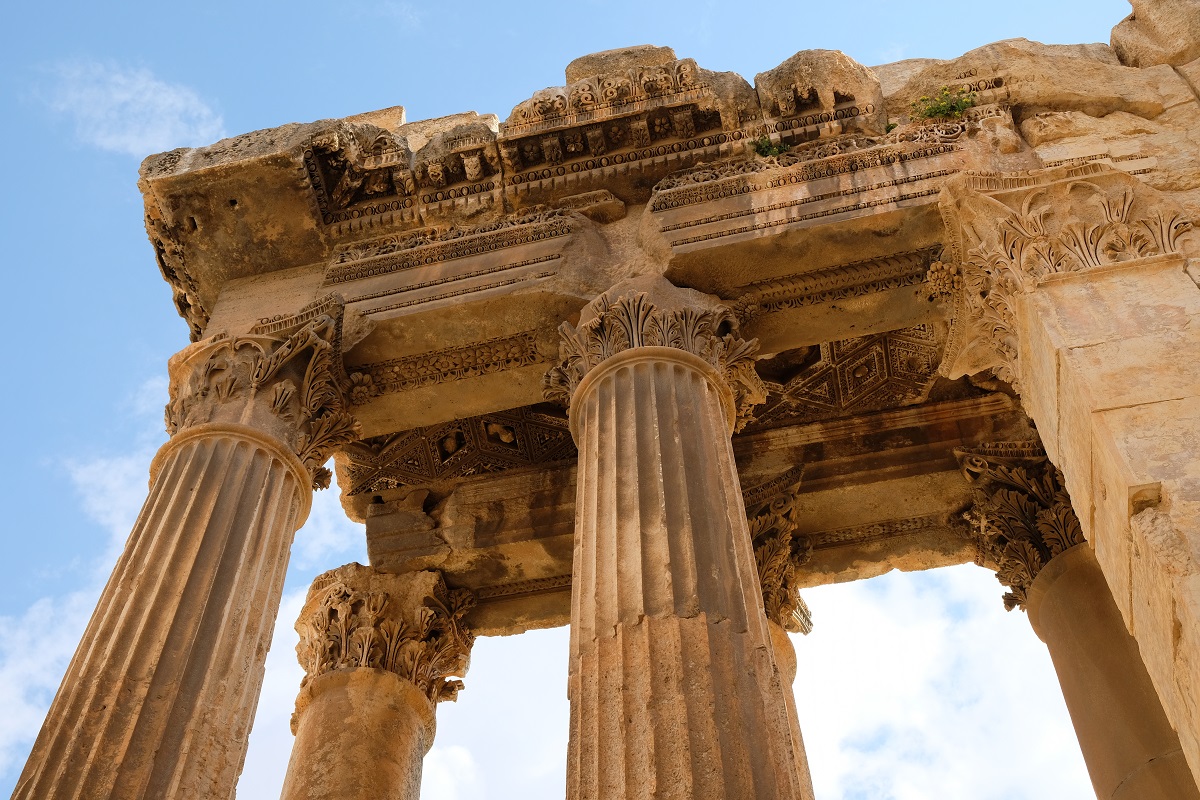 Look up where the beauty lies 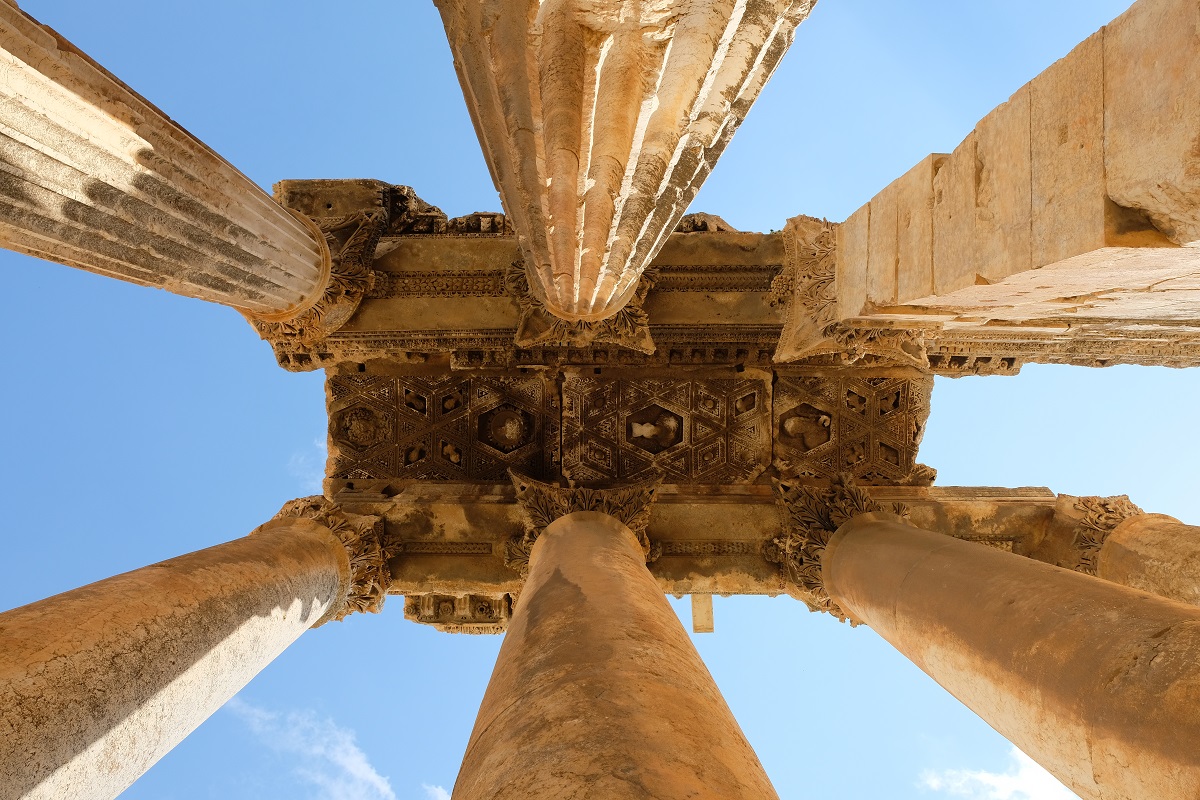 A part of the Temple of Bacchus’ peristyle 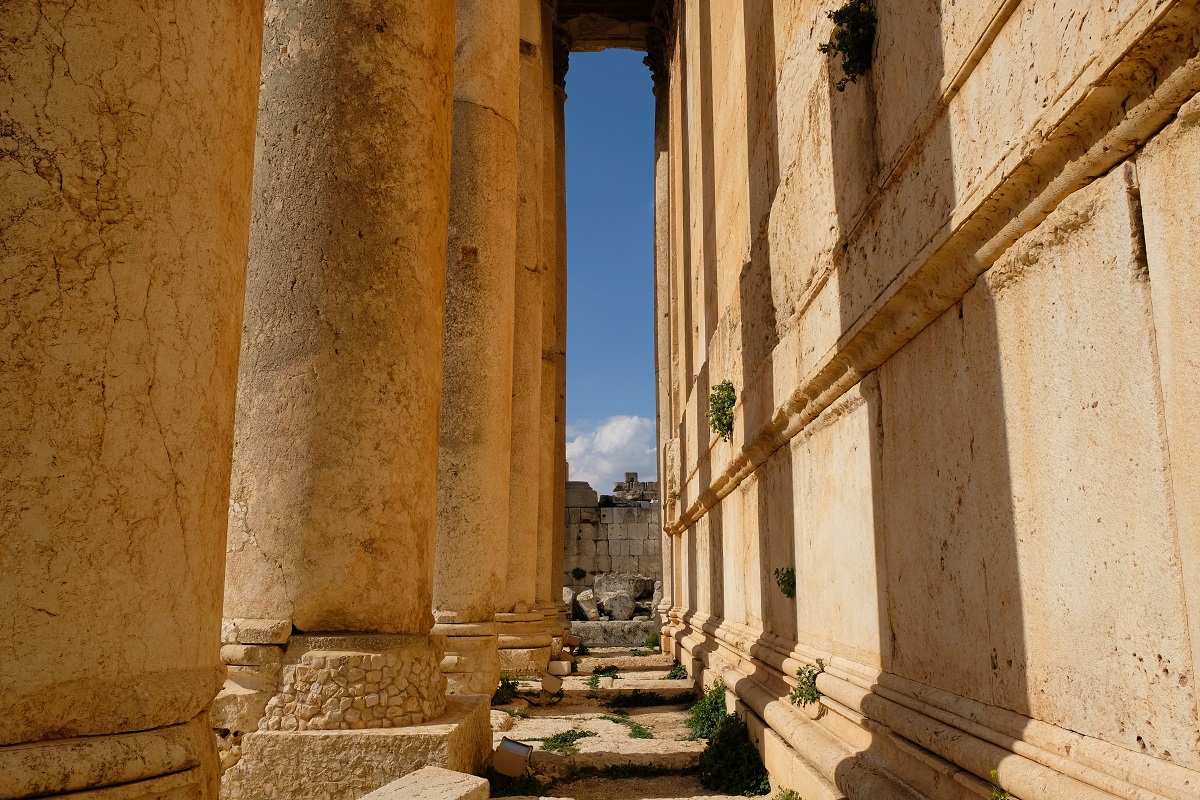 Looking out to the Temple of Jupiter 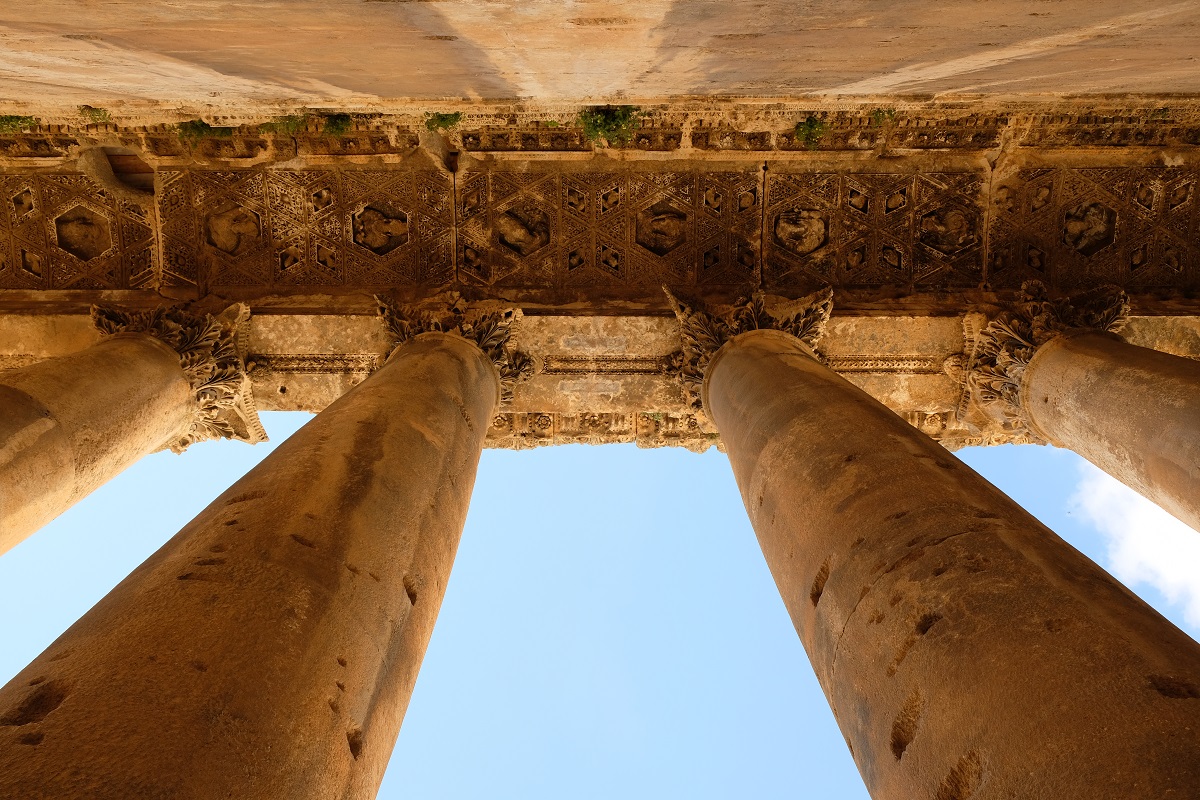 Roman gods and goddesses watching from above 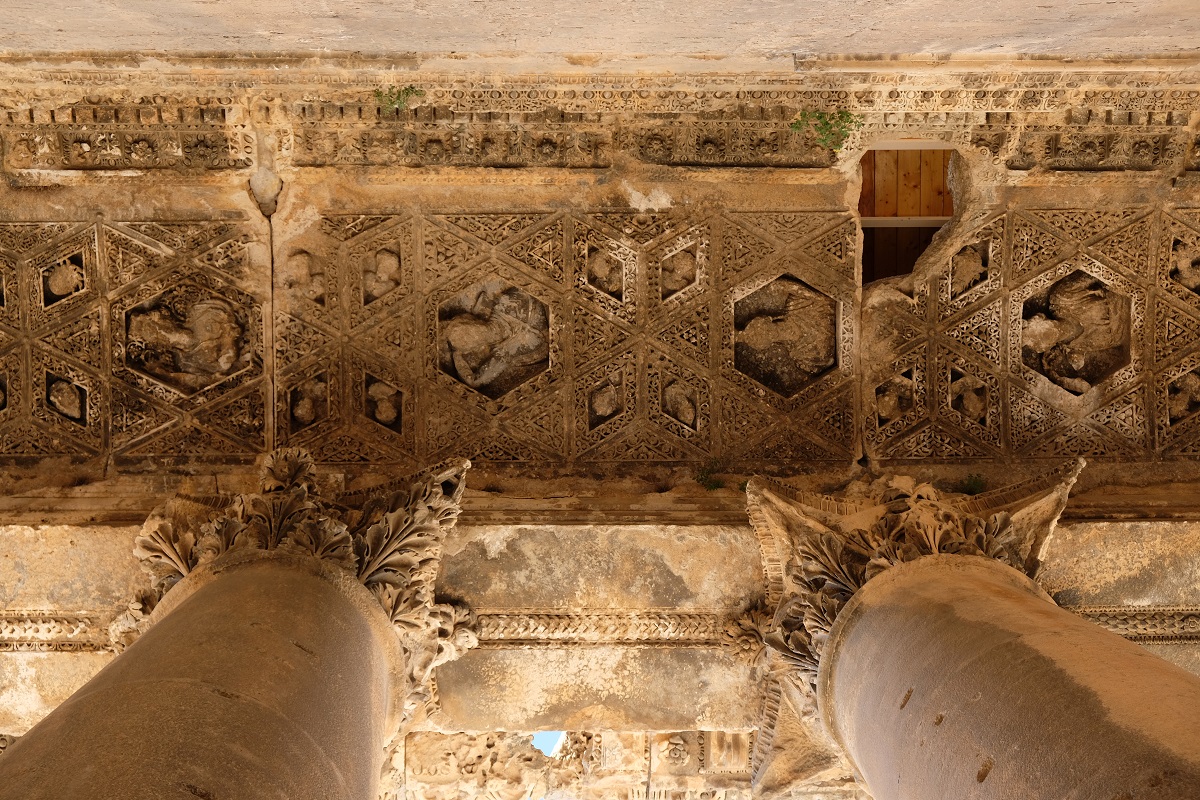 Mythical figures inside lozenges and hexagons 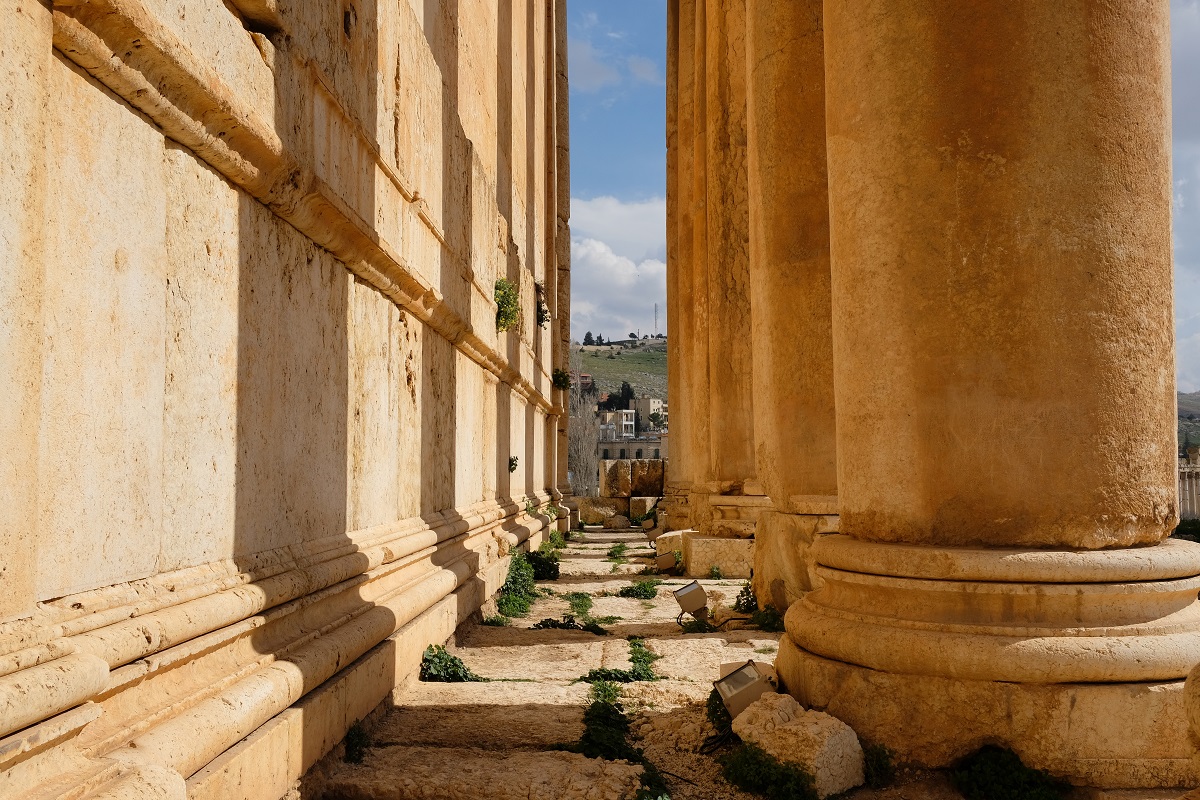 Looking out to modern Baalbek 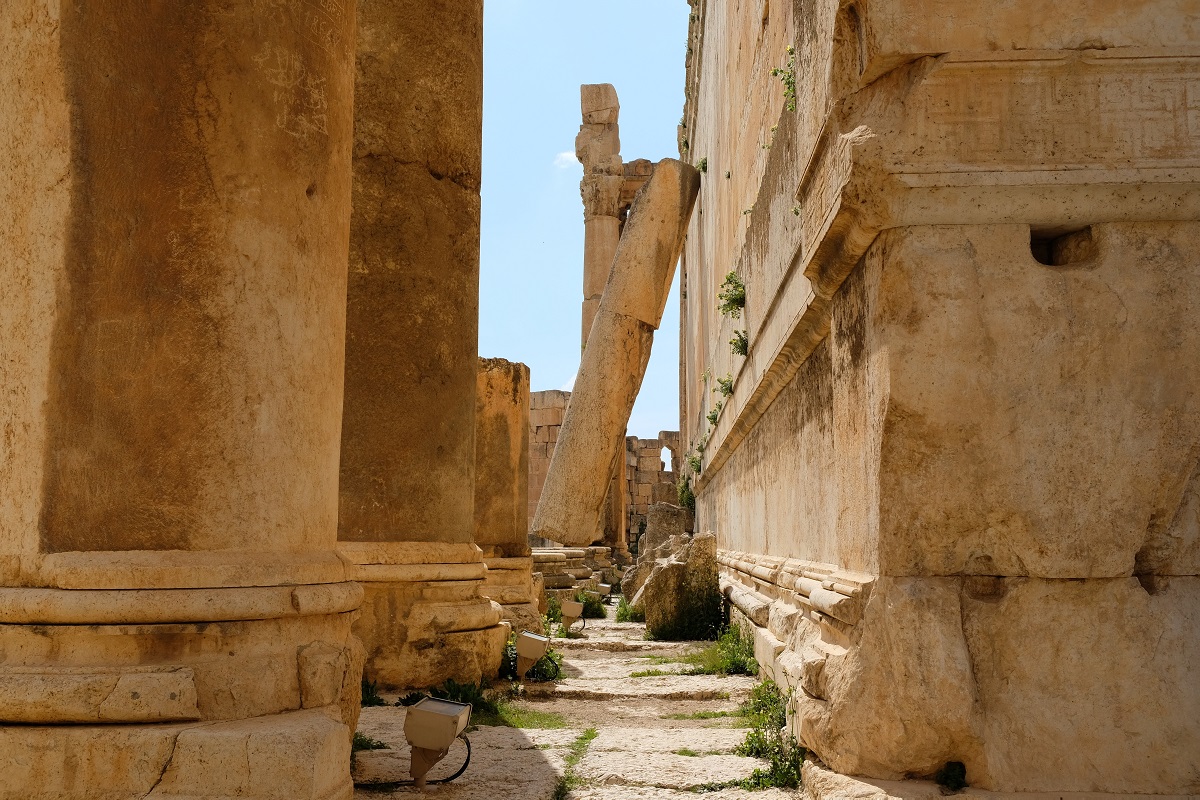 Toppled by an ancient earthquake 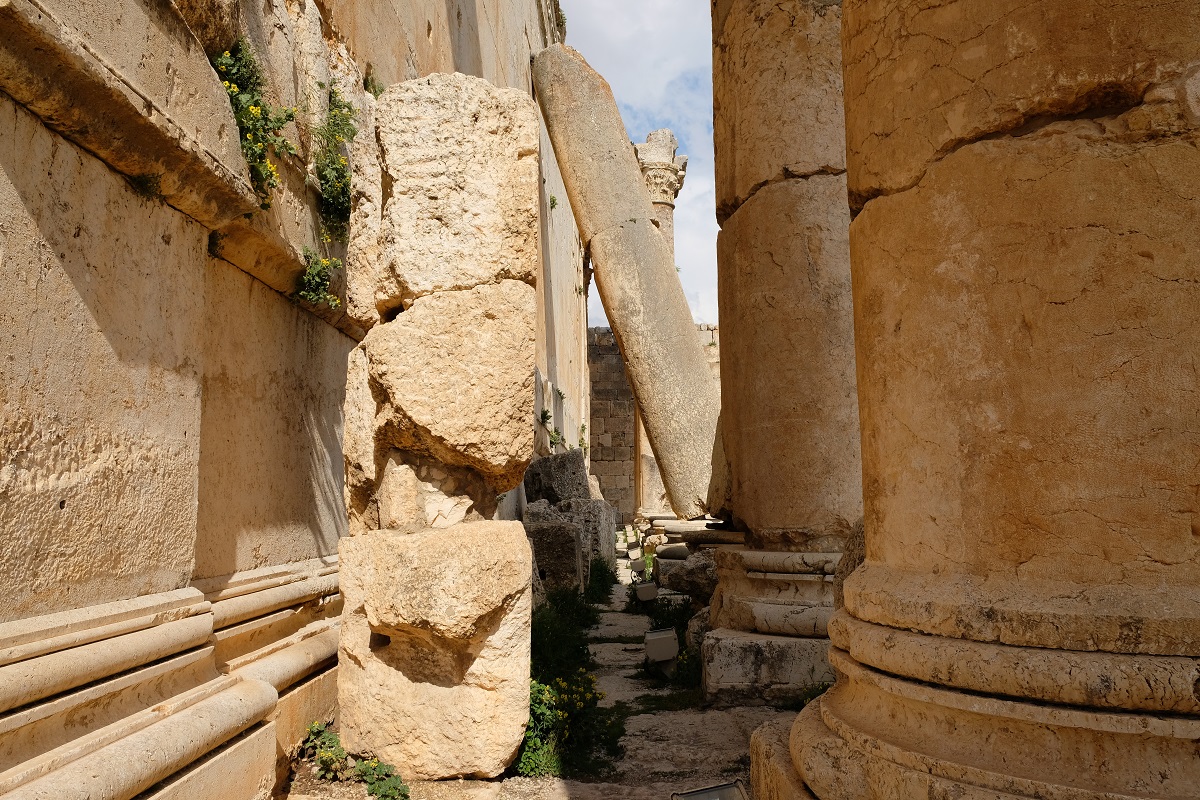 The same column viewed from the north 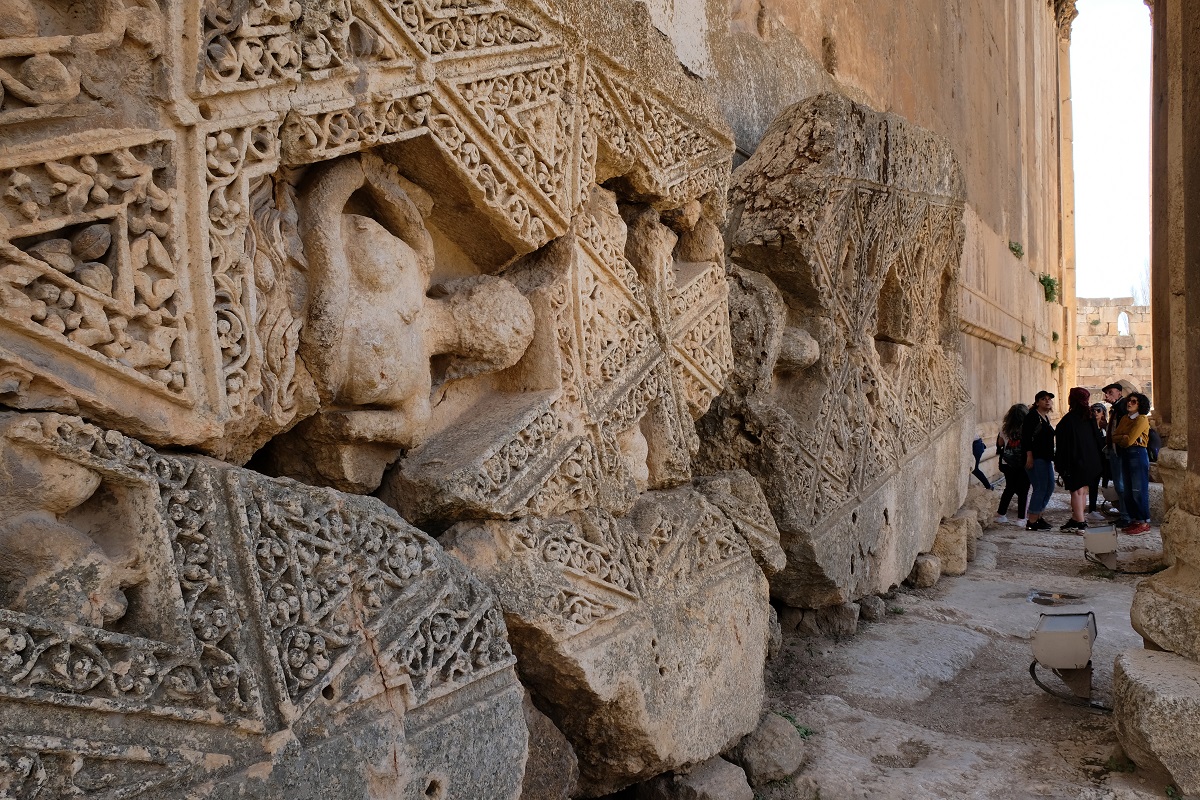 Cleopatra stung by a snake 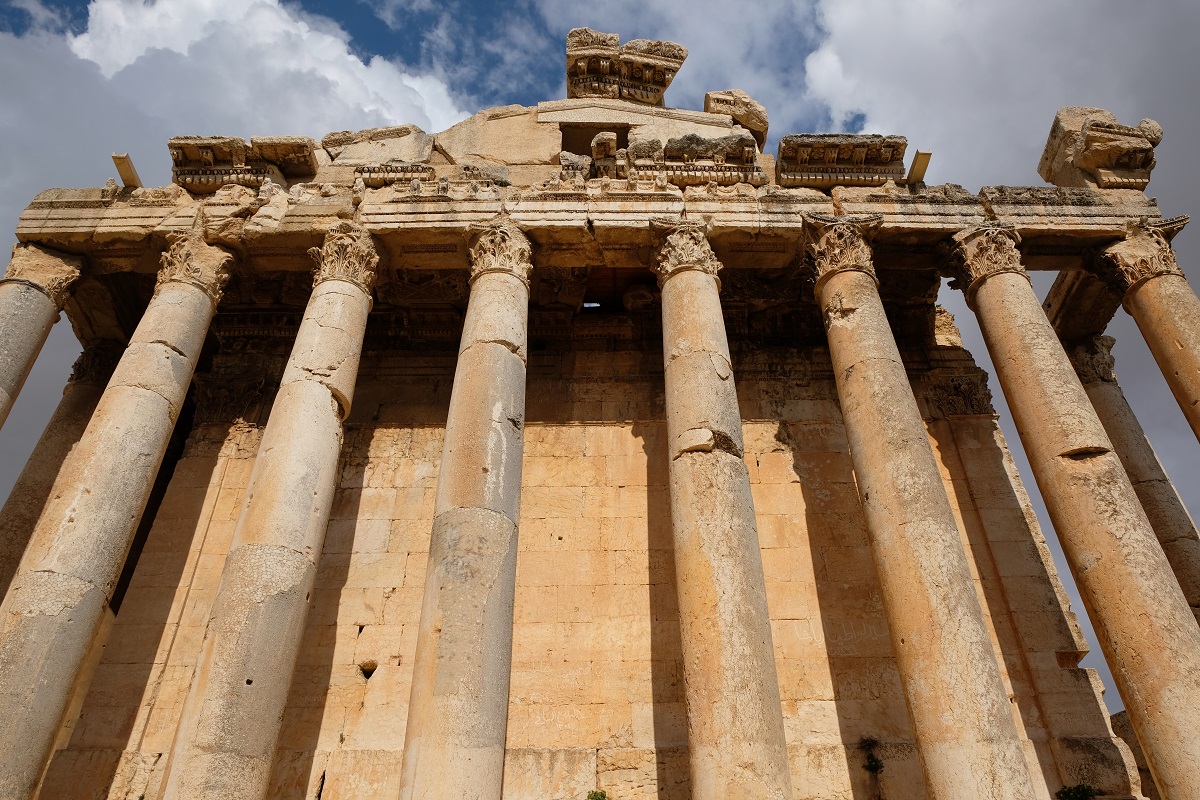 The Temple of Bacchus’ northern façade 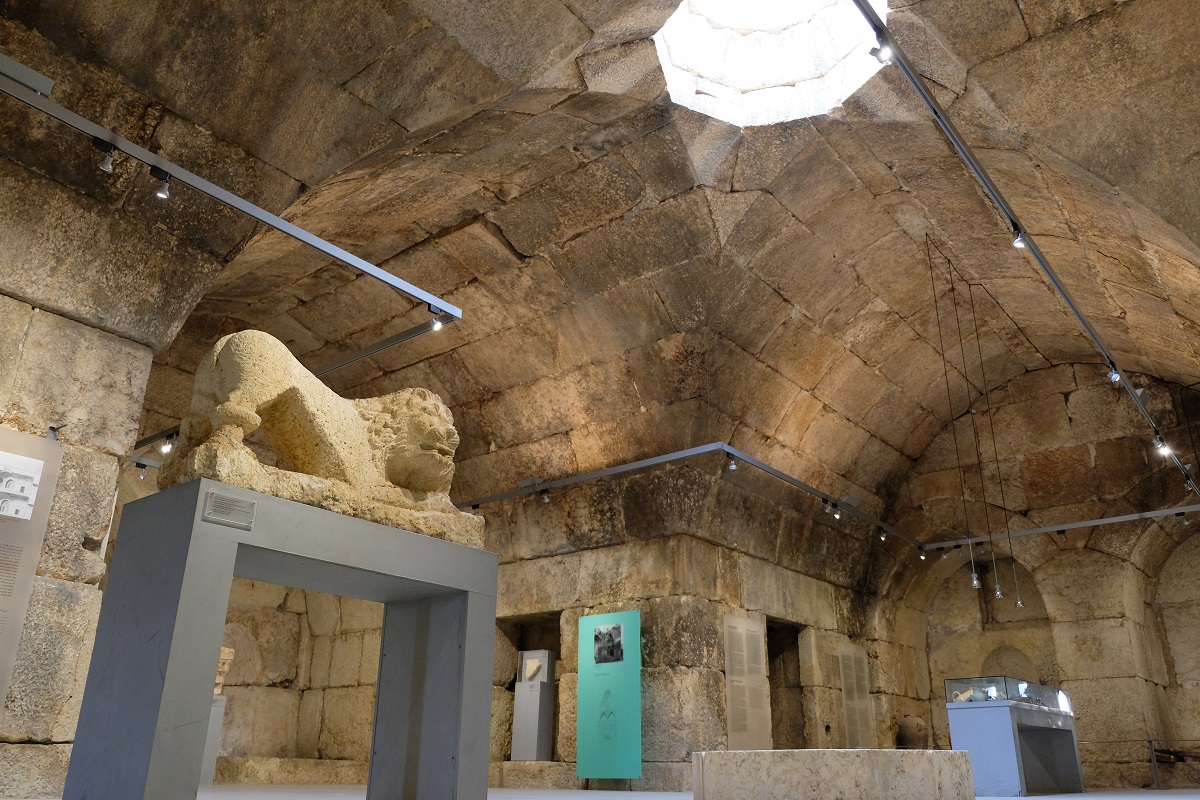 Inside the Ayyubid South Tower 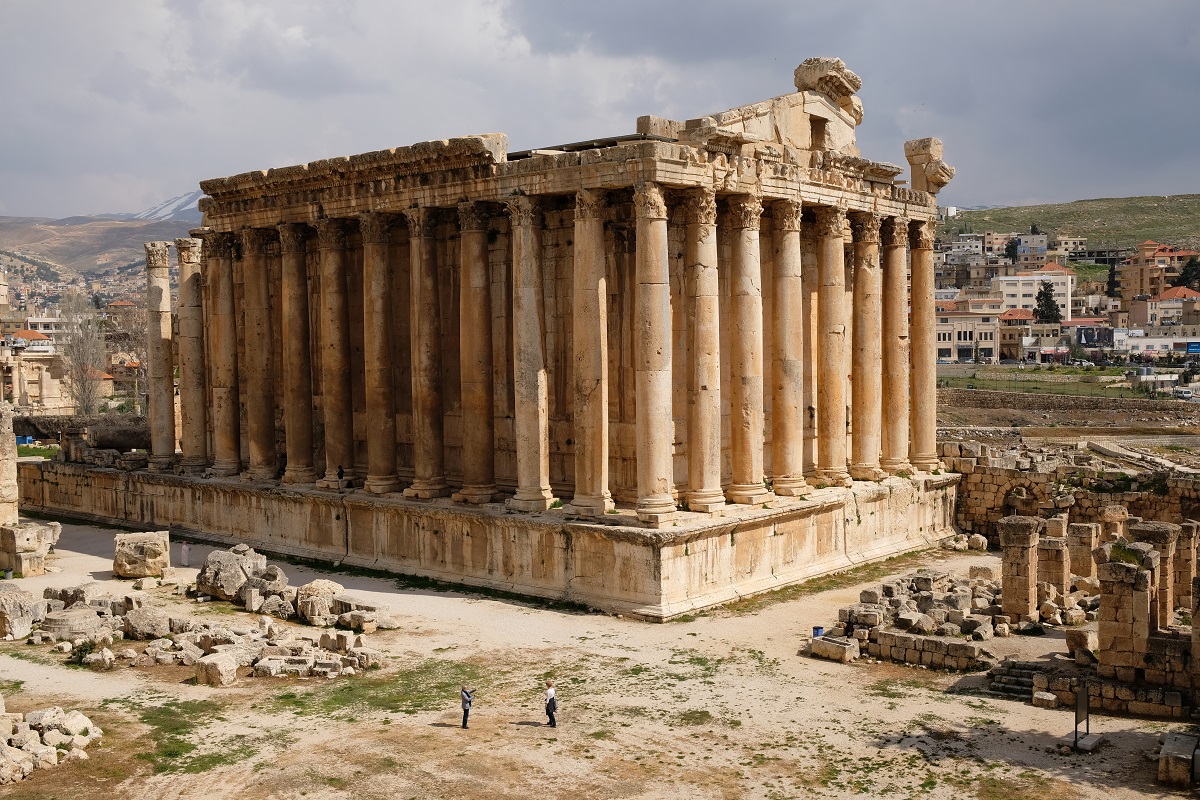 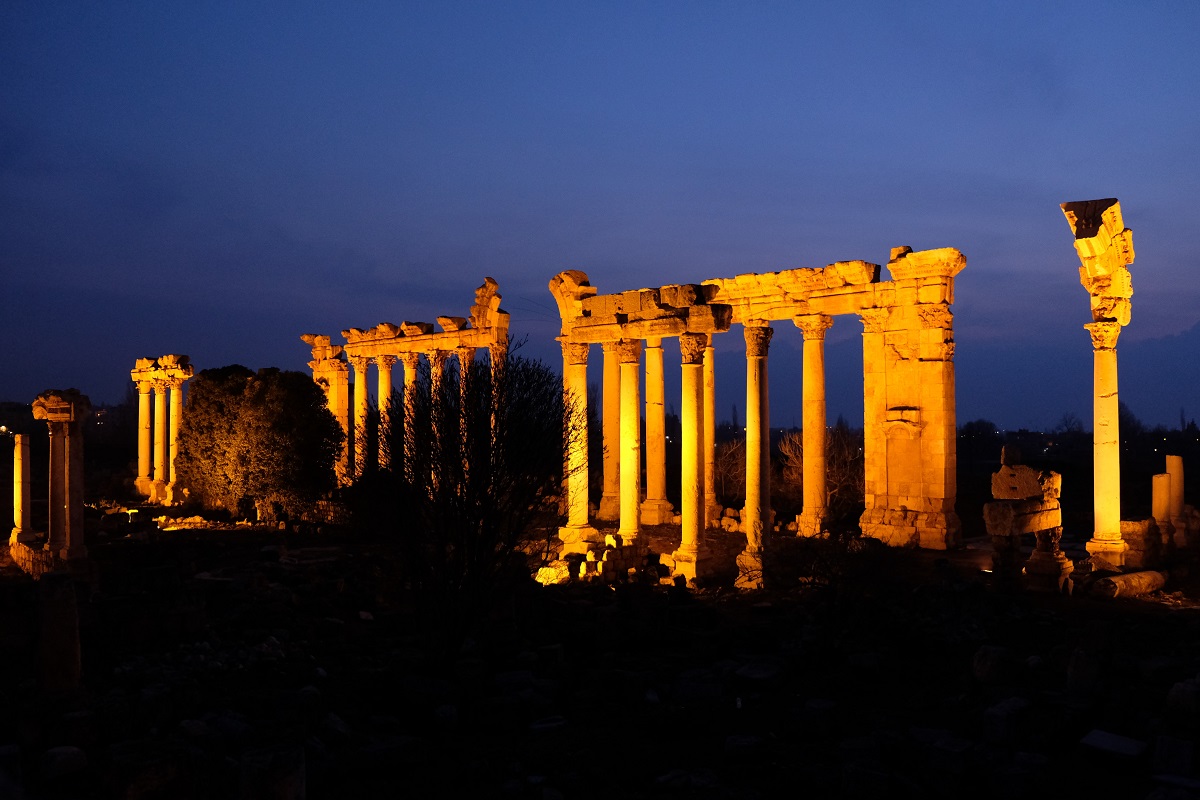 The remains of a Roman market near the temples

63 thoughts on “The Temple of the Wine God”