Once upon a time in Middle Earth, nine fellows traveled to the east to deliver a powerful ring back to its source. At one point they had to traverse the arduous pass of Caradhras, through snow-capped mountains with harsh weather and enchanted air. It was so dangerous the group was forced to take a detour right through the underbelly of the mighty mountains. Known as the mines of Moria, the underground tunnels and chambers were the dwellings of the dwarves, as well as something more sinister and unforgiving. An ancient evil creature called Balrog resided deep underneath towering peaks, and thanks to the sacrifice made by Gandalf the wizard, the rest of the group could go through the mines safely. Gandalf himself ended up fighting the demon and emerged victorious.

A world away in a land situated in a region dubbed the roof of the Earth, a Tibetan Buddhist monk by the name of Drukpa Kunley traveled from his homeland in Tibet across the mighty Himalayas and arrived in fertile valleys in what is now known as Bhutan. He introduced Buddhism, particularly the teachings of the Red Hat sect of Tibetan Buddhism, to the new land. However, unlike other holy men who spread the words of God (or sacred scriptures, or teachings to make humans live a better life) that usually revolve around compassion, kindness, and virtuousness, the Tibetan monk chose a rather unconventional path.

It is said that the Bhutanese people once lived under the constant threat and harassment of demons, including the much-feared demoness of Dochula. Then came Drukpa Kunley who, unlike Gandalf who used his sword and magical staff to fight Balrog, subjugated her with his “flaming thunderbolt”, also called the “magic thunderbolt of wisdom”, which was none other than his phallus, although the term thunderbolt might also refer to Vajrayana (Thunderbolt Vehicle), a school of Buddhism mainly practiced in Tibet and Bhutan. The demoness was then buried in a mound upon which a monastery called Chimi Lhakhang was built in the late 15th century.

Drukpa Kunley’s unorthodox approach in spreading Buddhism by flaunting his own genitals, preaching that in order to reach enlightenment one doesn’t need to shun sex, earned him the name “the Divine Madman”. It was also he who started the tradition of painting phalluses on the façade of one’s house to ward off evil spirits. This centuries-old practice is still evident chiefly in the village of Sobsokha near the mound upon which Chimi Lhakhang stands. Both are situated in Punakha Valley which itself sits below the Dochula Pass that separates it from Thimphu Valley to the west. Fertility seemed to be a recurring theme in Punakha Valley during my trip there, not only because of the plethora of phallus paintings everywhere I looked, but also the fact that the valley produces some fruits and vegetables which cannot grow in Thimphu Valley due to the latter’s higher altitude and colder temperatures.

Some of the 108 chortens at the Dochula Pass

The village of Sobsokha in Punakha Valley

At Sangchhen Dorji Lhuendrup Lhakhang, a nunnery perched on top of a ridge 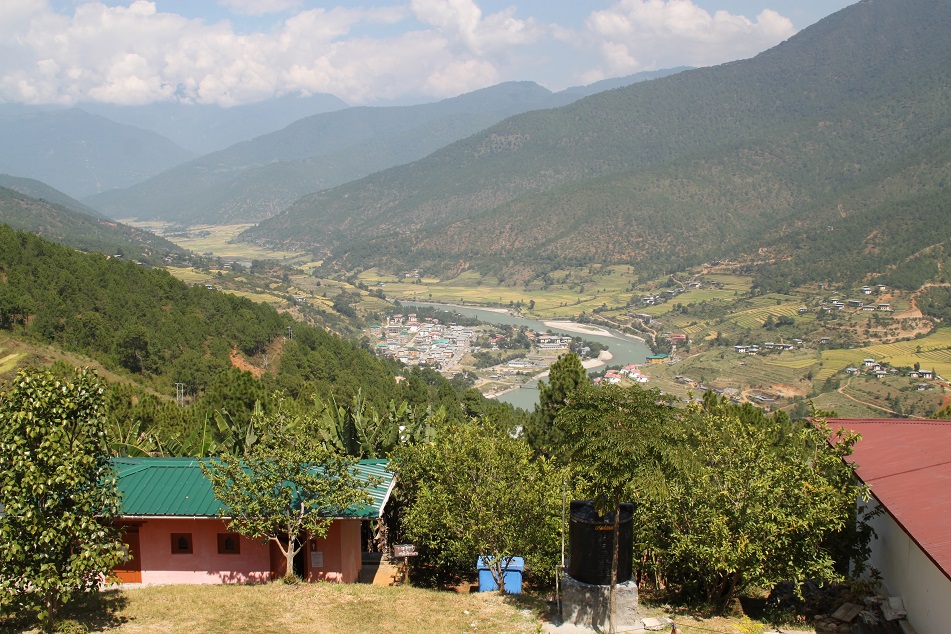 The view of Punakha Valley from Sangchhen Dorji Lhuendrup Lhakhang 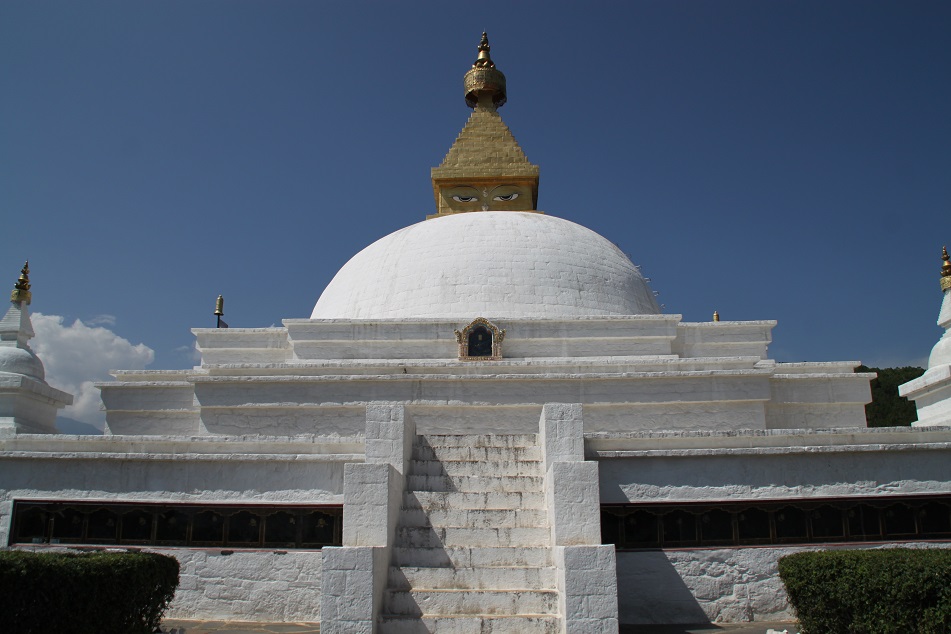 A Nepalese-style stupa within the nunnery compound

Kinga making a phone call outside the nunnery’s main temple 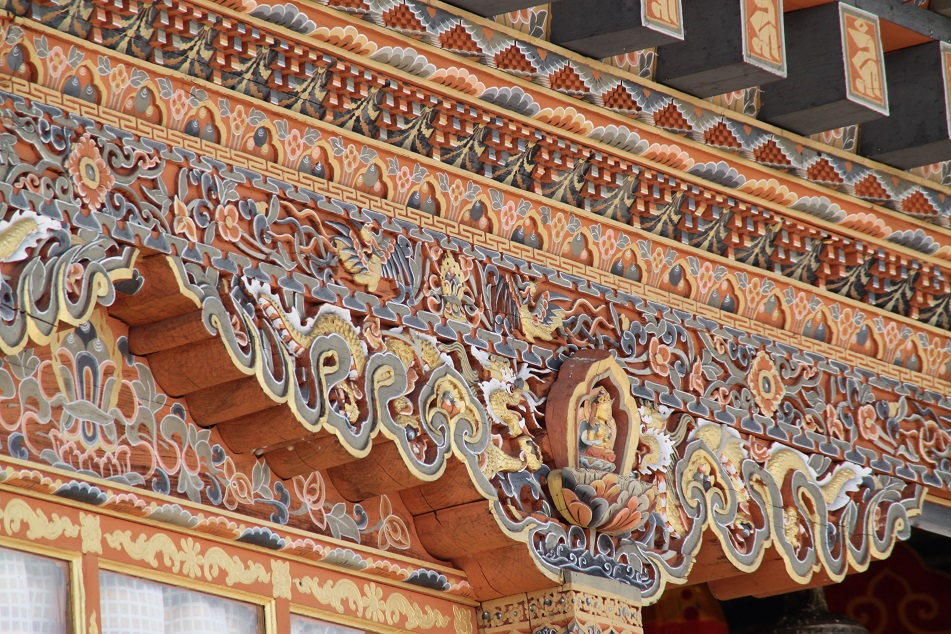 After tucking into momo (a type of dumpling found in Tibet, Bhutan, Nepal and some regions in north and northeastern India) and shapale (Himalayan-style empanada) at a small restaurant in Khuruthang – Punakha’s new town – Kinga and Phuntsho took James and I to Sobsokha to see firsthand the paintings this part of Bhutan is famous for. From the parking area we didn’t have to walk long to spot the first house sporting whimsical phalluses – some were even depicted with eyes and fangs. From there more and more houses with phallic paintings emerged until vast rice terraces replaced images of men’s fertility with that of the land. The rice in some parts of the terraces was already harvested, but the rest was still firmly planted in the fields; its golden color was a sign that in a few days’ time it would too be stacked up high for further culling to separate the rice grains from the husks.

Reminded by Kinga’s story that Thimphu used to have a lot of rice terraces, I asked him whether the capital once looked like Punakha Valley. “Yes. Thimphu used to look like this until the 1990s,” he told me.

We walked with a leisurely pace to Chimi Lhakhang, visible from afar thanks to its prominent hilltop location. At this point Kinga was already carrying a bottle of ara, a distilled spirit made either from rice, maize, millet or wheat which was given by a pilgrim who forgot to offer it at the temple. The Divine Madman was also known for his penchant for wine, hence the offering of this alcoholic beverage. Kinga told us that many childless women come to this temple from all over Bhutan and around the world to seek blessings for their fertility.

After we reached the temple’s grounds, we sat underneath a big leafy tree which seemed to be quite old. “Do you know what tree this is?” Kinga quizzed us. “A bodhi tree?” I instinctively answered, knowing that Siddharta Gautama attained enlightenment when he was meditating under the same kind of tree in Bodh Gaya, India. Kinga, a fountain of knowledge on Bhutanese Buddhism who at times felt more like a history teacher than a guide, nodded in satisfaction.

Kinga then began explaining the story of the Divine Madman, about Guru Rinpoche (a prominent figure in Tibetan Buddhism), and about the history of Chimi Lhakhang while a strong wind was blowing toward us. The tree’s branches were rattling, making it sometimes difficult to hear what Kinga was saying. He expertly elaborated on aspects of Buddhism in the country, so complicated I occasionally got lost especially when he mentioned unfamiliar names or when the wind was blowing fervently. The gusts of Punakha Valley, it turned out, not only took away some of Kinga’s words, but also the sanity of my camera for the next morning, it suddenly started acting up. There couldn’t be a worse place for my camera to break down.

Our first momo in Bhutan 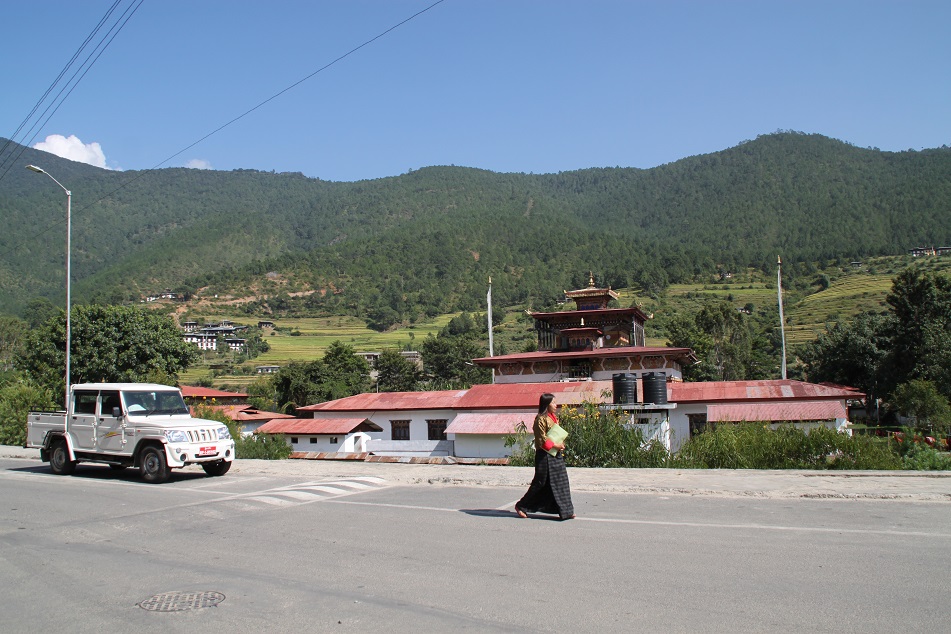 Khuruthang Lhakhang, the new town’s temple, with a beautiful backdrop

Entering the land of phalluses 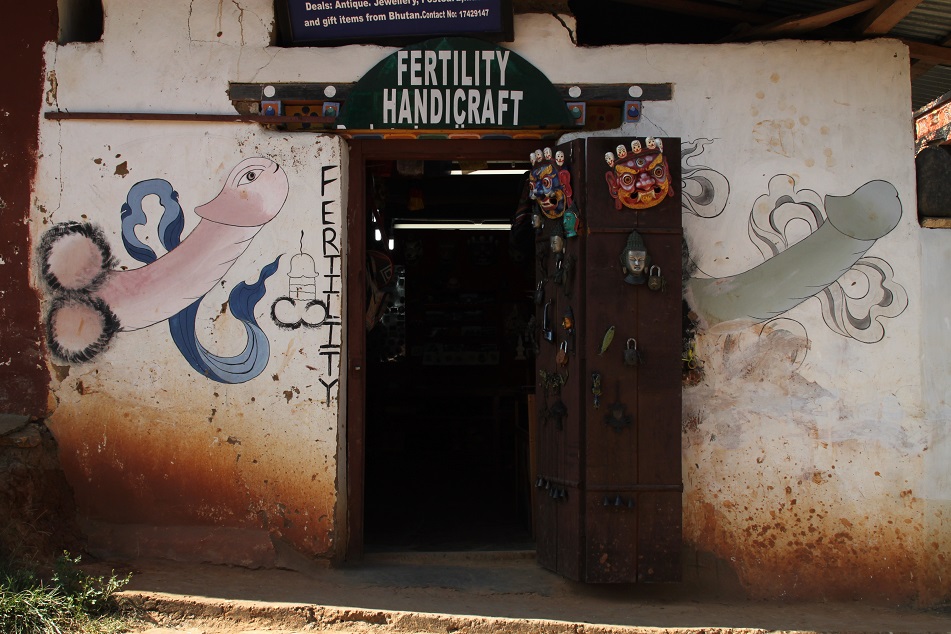 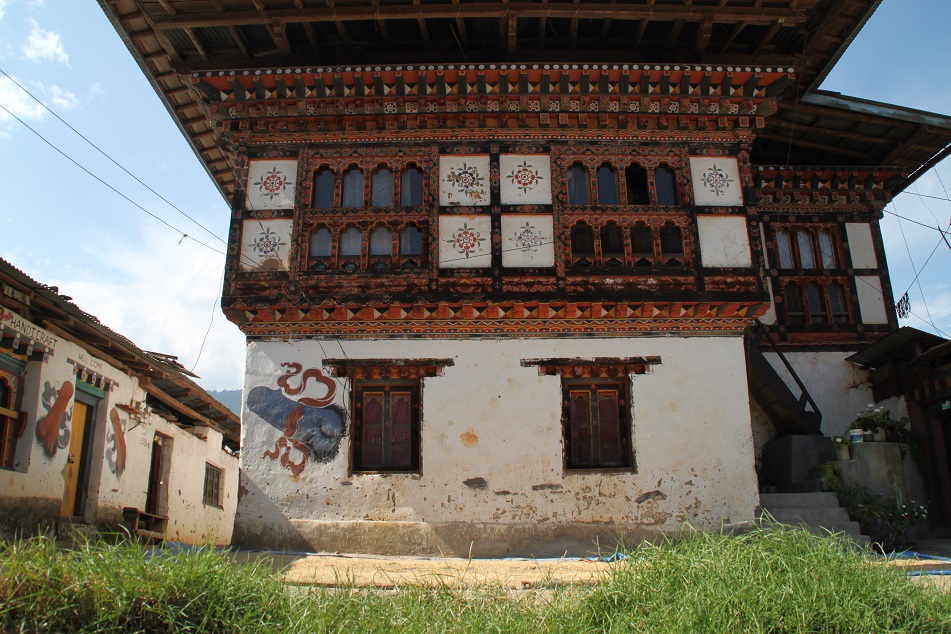 A typical house in Sobsokha 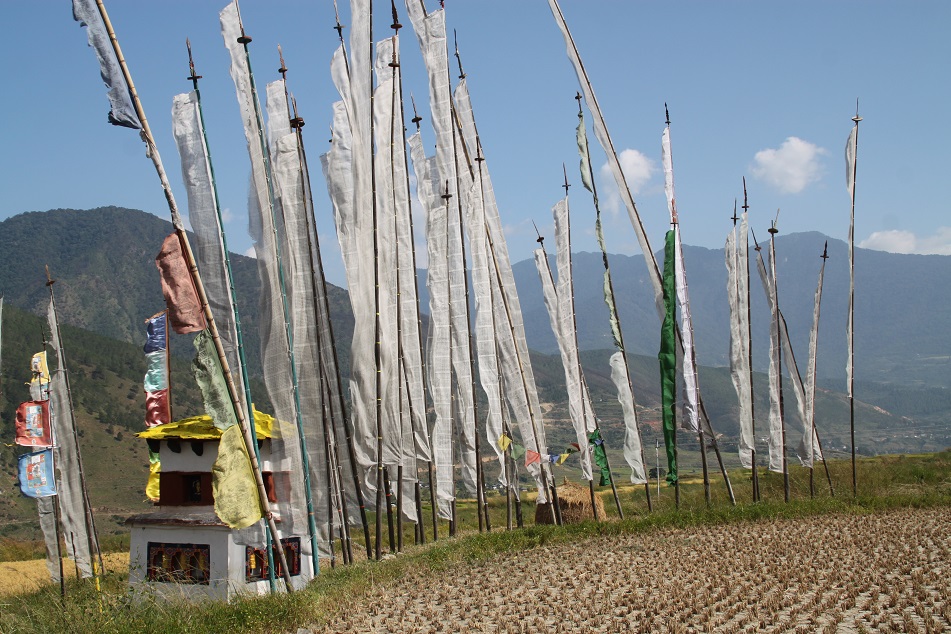 Prayer poles on the hike to Chimi Lhakhang 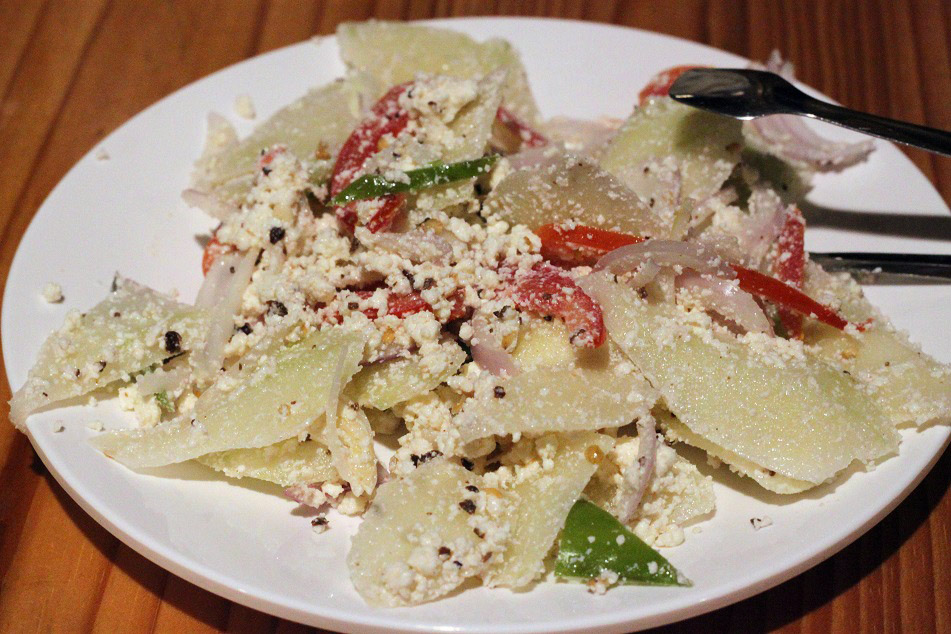 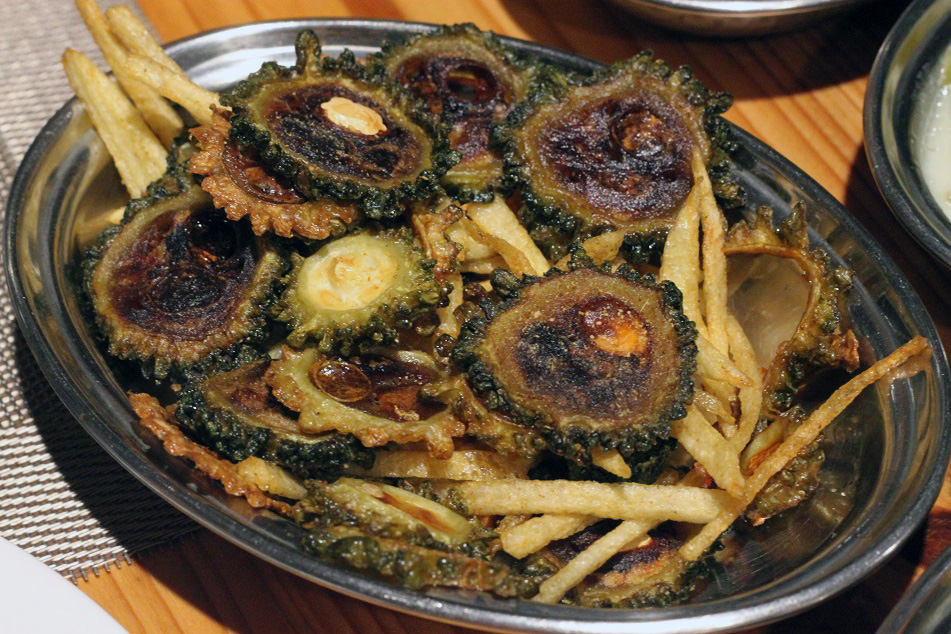