The turboprop plane which brought us from the city of Manado in North Sulawesi almost an hour earlier started its descent. Strings of verdant small islands now appeared larger from the window, and soon enough the venerable Mount Gamalama rose straight from the sea, towering at 1,715 m above sea level forming the focal point of the island of Ternate. The conical volcano is essentially the island itself as human settlements, plantations, colonial forts, mosques and churches are scattered all over its slopes.

The pilot made the final turn, approaching the runway which was by now visible from my window. Suddenly the entire plane started to wobble – trying to fight the crosswinds – which at first felt like regular mid-air turbulence. But the intense pressure caused by the winds built up as the plane got closer to the runway, then the pilot decided to turn around a moment after I saw the terminal building of Sultan Babullah airport.

“Due to the strong crosswinds we need to go around and try to land again in about 10 minutes,” the pilot made the announcement in Indonesian. At least we could get a free aerial tour of the beautiful islands around Ternate, I comforted myself. The undulating hills and mountains of Halmahera – the smaller of the two K-shaped islands in Indonesia – as well as the turquoise waters that fringed each of the small islands nearby made a pleasant distraction to the thought of our delayed landing. Several minutes later the pilot made the same turn he did less than half an hour earlier as he was trying to land the airplane for the second time.

The winds had not tempered, and as we were descending toward the runway the plane started to rock hard while the pilot was maintaining its steady approach. Then, the landing gear made a loud thud, only to be followed by the plane’s return to the skies.

“The winds are still too strong for this plane to handle. We are returning to Manado now.”

I turned to James to translate what the pilot just announced, but his face was already covered with large beads of sweat. We couldn’t have been more grateful – and kissed the ground if we could – as we landed in Manado. After the mid-air suspense, and spending a night at a drab hotel near the airport, we were ready to try our luck to land in Ternate the next morning. However the difficulty we faced to get to the island where clove originated from paled in comparison to the arduous sea voyages the Portuguese and the Spanish took to reach this remote island. Ferdinand Magellan himself who, under the auspices of King Carlos (Charles) V, led the westward mission to search a direct sea route from Spain to the Spice Islands did not live to see the islands himself as he was killed in the Philippines several months before the Spanish expedition reached the Moluccas.

A Turboprop Airplane that Took Us from Manado to Ternate

Traces of Past Eruptions

View of Ternate and the Islands to Its South

More than three centuries later when the Spice Islands, including Ternate, were under the firm colonial grip of the Dutch, a British naturalist by the name of Alfred Russel Wallace made his way to the Malay Archipelago (modern-day Indonesia, Malaysia, Singapore and Brunei). For eight years he explored deep into the jungles of Sumatra, Borneo, Java, Sulawesi and all the way to New Guinea to collect hundreds of thousands of animal specimens to study, many of which were species previously unknown to the scientific world. It was in Ternate where Wallace wrote a long letter to Charles Darwin, who at that time was in the Galapagos, suggesting a theory which would significantly change our understanding of the nature and the large variation of species on the planet. While both Darwin and Wallace came to the conclusion that natural selection is essential to the survival of a species, the former emphasized more on competition while the latter on adaptation to the environment.

After studying the different species of fauna across the archipelago, Wallace further proved that the animals in Bali were completely different from the ones in Lombok despite the fact that both islands were separated only by a narrow strait. No elephant, tiger, or rhino was found on the islands east of Bali. On the other hand, cockatoos and wallabies were never found in Bali, Java, Sumatra or Borneo. This faunal boundary is now known as the Wallace Line, marking the separation of the glacial-period lands of Sunda (which makes up Sumatra, Java, Bali, Borneo and Mainland Asia) from Sahul (present-day Australia and New Guinea).

I came to Ternate more than 150 years after Wallace’s expeditions across the archipelago, yet it was not hard to see why the island had inspired him so much. A resident gecko, which was bigger than a regular house lizard but smaller than a tokay gecko, had a Y-shaped line that ran through its back. It kept a watchful eye on us while hanging from the ceiling or walls with its striped tail constantly curled up. The skunk gecko, as it is commonly known, is in fact a species native to New Guinea and the surrounding islands. Another day I saw a sawyer beetle with black and white stripes on its antenna and a cross on its back, and a mysterious insect whose body formed the letter T in mid-flight, and a very brightly-colored green lizard.

However, despite being the island where one of the most revolutionary ideas in the history of natural science was conceived, today Ternate remains a place where the people are still deeply superstitious. A white crocodile donning a red ribbon was once spotted near Lake Tolire Kecil, a friendly local staff member at a government-funded museum told us. Meanwhile Lake Tolire Besar, a bigger lake not far from Tolire Kecil, was believed to be infested by supernatural crocodiles. 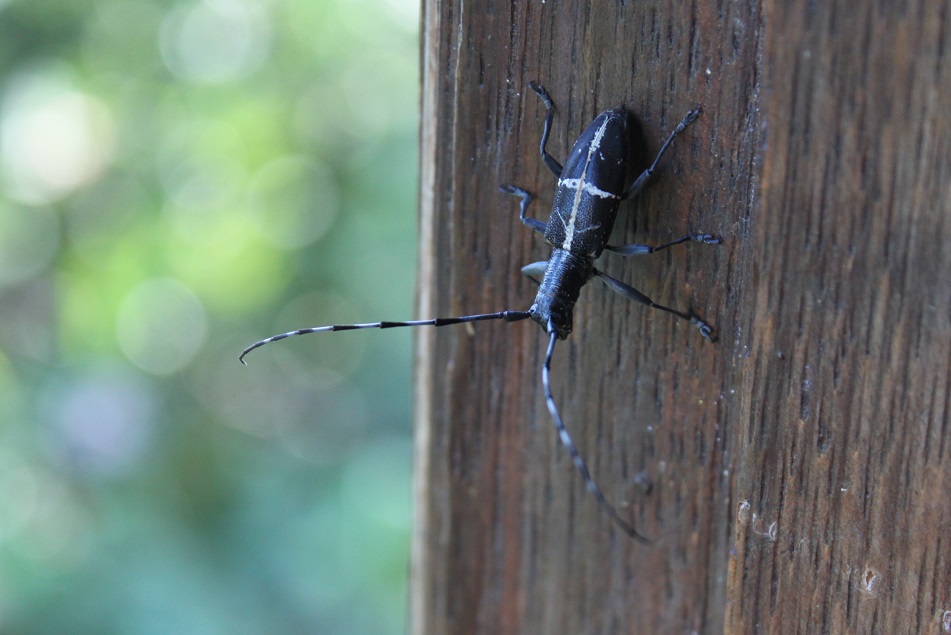 A Visitor to Our Room 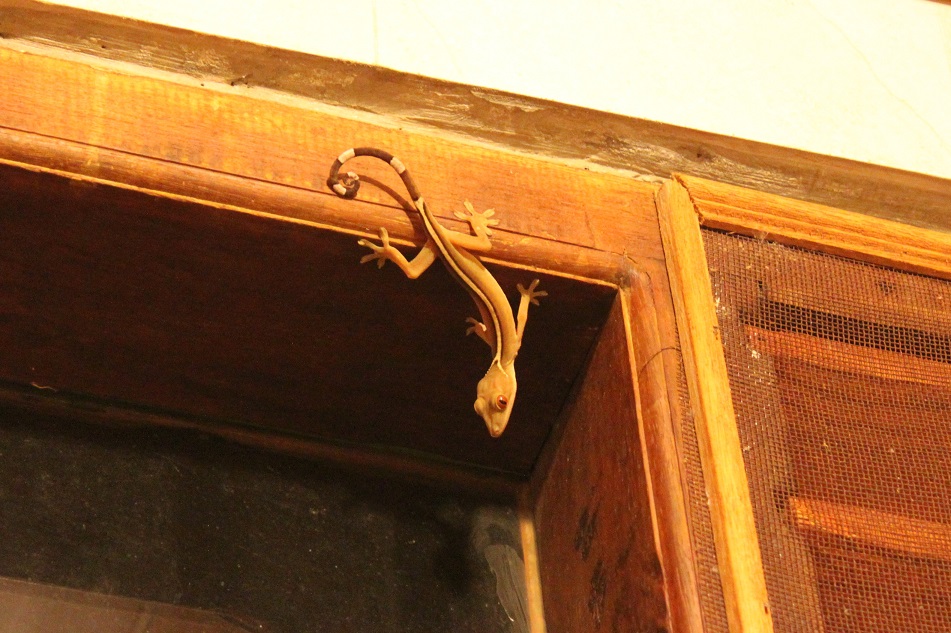 On the Slopes of Mount Gamalama 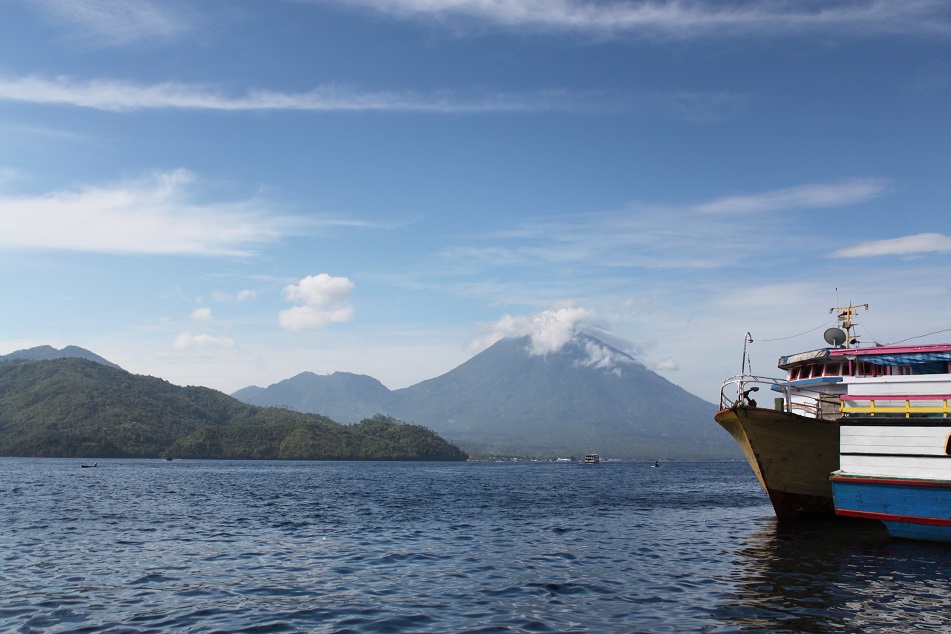 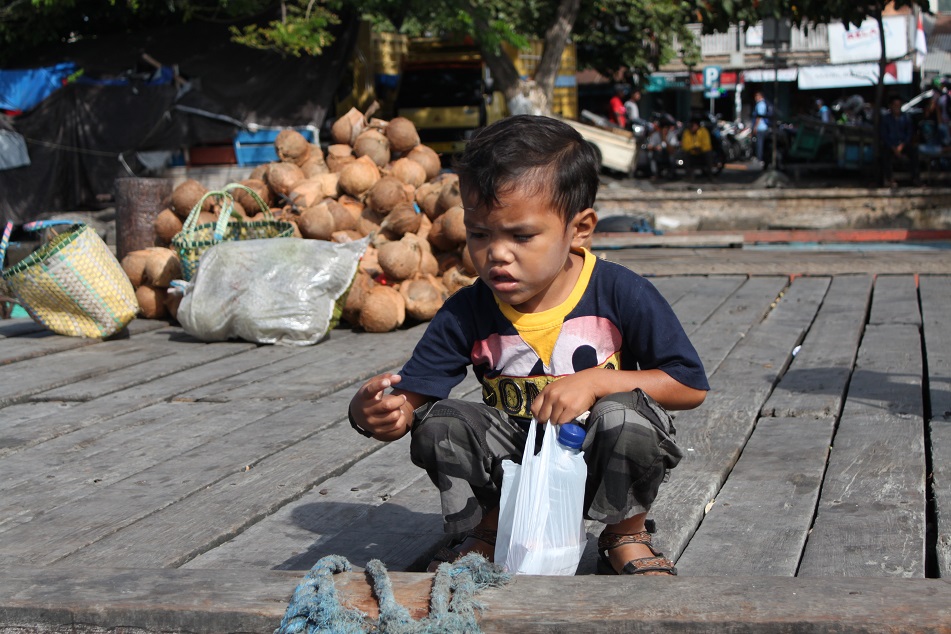 An Inquisitive Boy Waiting for A Boat 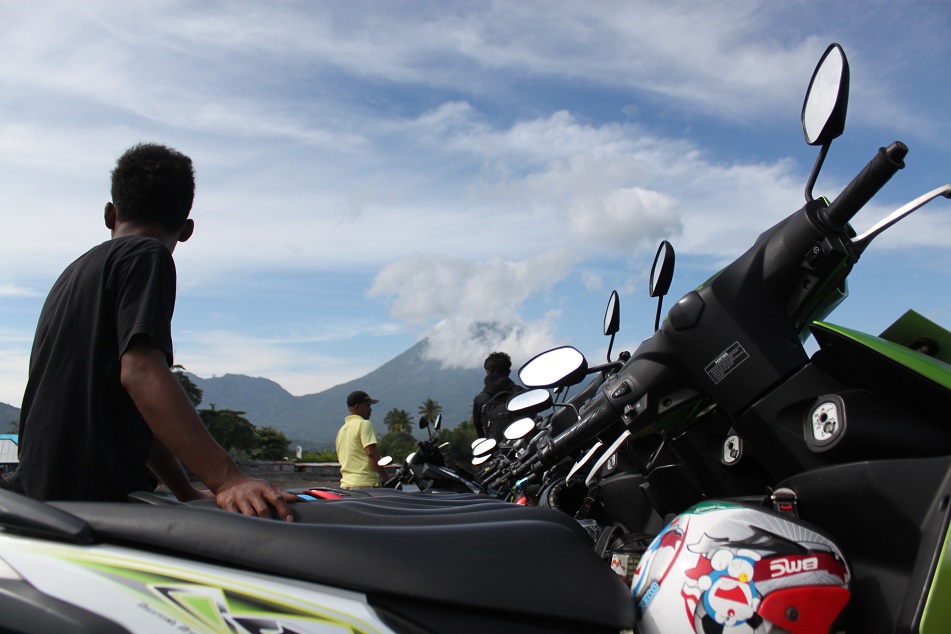 All Motorcycles Tied Up on the Roof of the Boat

Maitara, A Small Island near Tidore 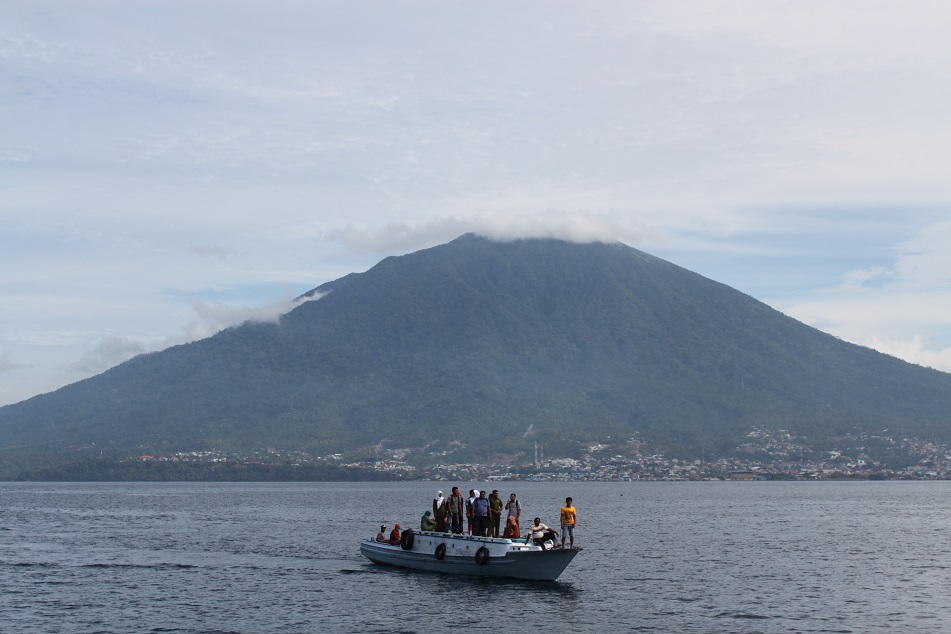 As is the case with many other volcanoes in Indonesia where chosen people are tasked with pacifying the unpredictable giants, Mount Gamalama’s destructive power is believed to be able to be tamed only by the local sultan. Every year he sails around the island to prevent catastrophic events from happening to his people, and there was a time when the sultan had to fly from Jakarta – Indonesia’s capital – back to Ternate more than 2,000 km away to calm the erupting volcano.

We were on the island only a few weeks after the death of the sultan. At the palace, the guard explained to us that a sultan never appoints his successor – it is up to the crown itself to decide. On one particular day all of the deceased sultan’s sons will be summoned to the palace and locked inside a chamber with the crown. Each of them will try the crown, and whoever fits it perfectly becomes the new sultan of Ternate. Together with the sultans of Tidore, Bacan and Jailolo, they are known as Kie Raha, the four mountains.

Superstitious, yet very friendly. The people of Ternate were among the most amiable in our six-month trip across Southeast and South Asia. However, in spite of that and the island’s importance in the history of global colonialism, Ternate is still largely unknown beyond Indonesia. We only saw eight foreign tourists in one week, and the low number of visitors meant that some places were locked even during the day. At Fort Tolukko, we had to knock on the door of a nearby house to find an old lady who had the key to the fort.

With or without tourists, life goes on for the people of Ternate whose world is dictated by Mount Gamalama. In the last five years alone, the volcano has erupted at least three times with increased volcanic activity every now and then. The sudden closure of the airport is not an unusual event, but rather a part of normalcy on this remote fertile island. For the Ternateans, que sera sera. 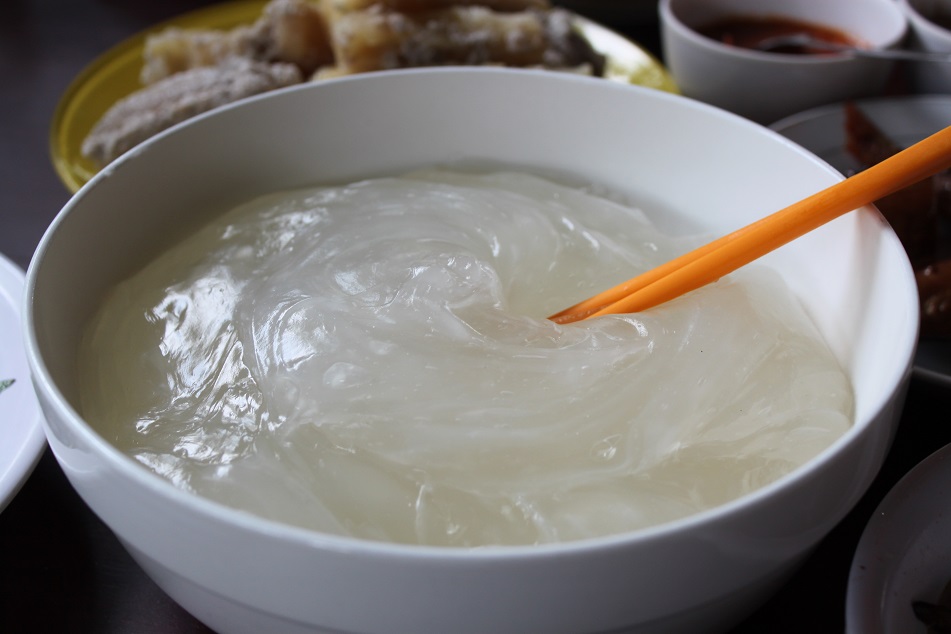 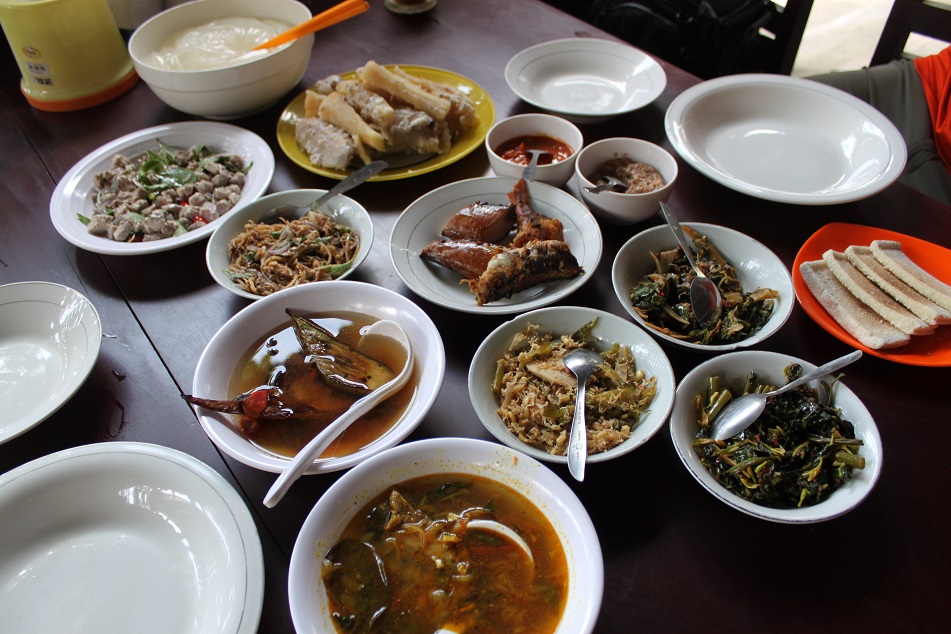 Served on the Plate

24 thoughts on “Ternate: Science and Superstition”