One dynasty falls, another rises. One kingdom declines, another flourishes. It is one of many patterns that repeat in perpetuity over the course of the history of mankind. As the influence of the once mighty Buddhist kingdom of Bagan gradually waned, at the northern fringes of the Indian Plate to the west of Bagan – the tectonic plate that has been pushing the Eurasian Plate in the north, creating the Himalayas – a political dynasty emerged in the early 13th century. For more than five centuries, the dynasty – known as the Mallas – would shape the political landscape as well as the architectural and artistic styles of a region which today makes up the Kathmandu Valley.

On one Monday afternoon at the end of November, the old Boeing 737 we took from Kolkata in India began its descent. The mighty, snow-capped peaks of the Himalayas and the hilltops that seemed to be a few hundreds meters away from the plane reminded me that we were about to land in a no ordinary place, a place which several months prior to our arrival was hit by the same brute force that created its majestic landscape.

“Welcome to the birthplace of Lord Buddha” read a billboard along the corridor toward the arrival hall of Tribhuvan International Airport. Having traveled in southern India for a month I was mentally prepared for any surprises or challenges I might encounter upon arriving at Nepal’s sole international airport. However, to my surprise immigration was a bliss. Several self-service visa on arrival kiosks were installed and, most importantly, easy to use. The immigration officer was very friendly and welcoming, all was well, until we arrived at the baggage claim area. Chaotic is an understatement.

A few months before our trip to Nepal, another crisis – a man-made one – hit the country, very hard. In September 2015, the parliament passed a new constitution which had been put on negotiation table for years. The Madhesi people, an ethnic group within Nepal culturally related to the people from Indian northern states, protested the new constitution and, purportedly backed by India, staged a months-long blockade over the main trade route between the two countries. Fuel and medicines became scarce in Nepal shortly after, and prices skyrocketed. It was the last thing the Nepalese needed following the devastating earthquakes in April.

At the airport taxi counter a staff mentioned a price to me, and explained briefly about the fuel crisis. Bargaining really was out of question for us, understanding the dire situation the local people were facing. However, some tourists, we were told, unfortunately didn’t really care, and chose to complain about how much more expensive they had to pay to the face of people who had to buy gasoline at a price four times more expensive than how much they had to pay prior to the crisis, and a canister of LPG seven times the normal price, if they could find them at all at the black market. All while the number of foreign tourists visiting the country kept dwindling.

About half an hour later we arrived in Bhaktapur, our first destination in Nepal. Just before dark we arrived at our hotel, a multiple-story modest accommodation right at the corner of Taumadhi Square, one of Bhaktapur’s main squares. Then the power went out just as we were checking in, and unlike the regular power outages in India and Myanmar, we would soon learn that the fuel crisis meant hours of no electricity in Nepal, every single day.

Exquisite Wood Carvings at the Palace of 55 Windows

Chyasilin Mandap, A Beacon of Hope for Nepal Reconstruction

Ornaments at the 18th-Century Golden Gate 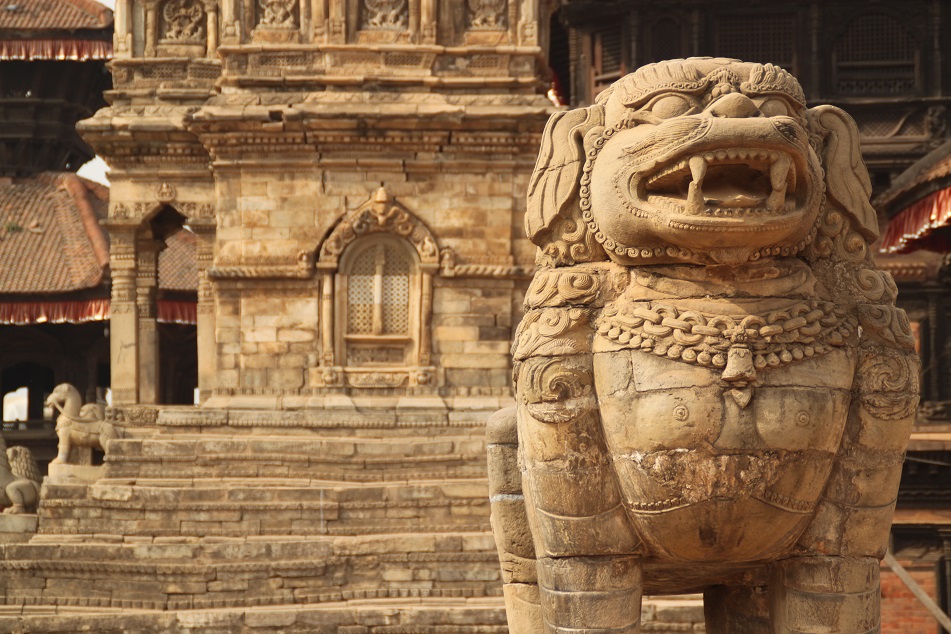 A Stone Lion at the Eastern End of Bhaktapur Durbar Square 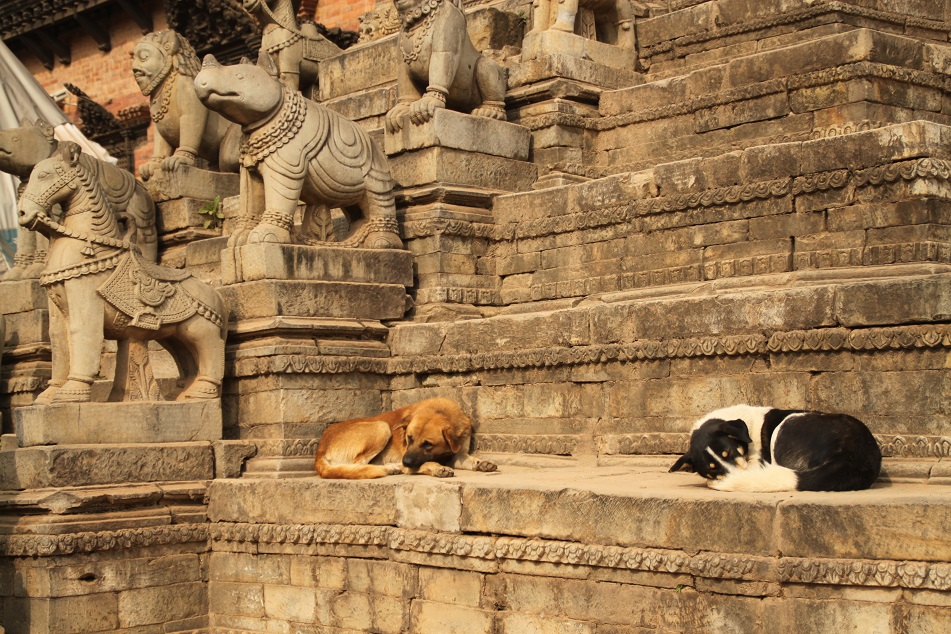 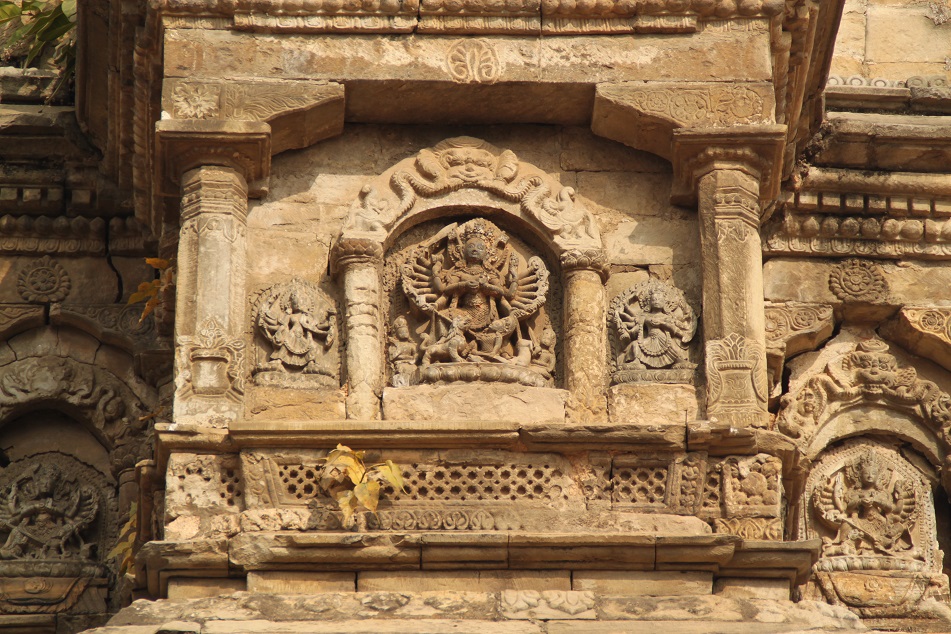 The Remains of Silu Mahadev Temple

Bhaktapur together with Kathmandu (Kantipur) and Patan (Lalitpur) were the centers of the political realm of the Mallas, and throughout their rule the three cities witnessed repeated union and split among contemporary Malla kings. From the rise of the dynasty until the 15th century, Bhaktapur was the royal seat of the kingdom, and many vestiges of this golden age of the ancient city managed to survive the conflicts and earthquakes in and around the valley over the course of centuries.

Dattatraya Square, the oldest of the three main squares of Bhaktapur, sat to the east of the other two, with the 15th-century Dattatraya Temple its landmark and focal point. Next to the temple was a monastery, decorated with exquisitely-carved peacock windows which were crafted a few decades after the completion of the temple.

Then the royal court shifted to Durbar Square where many impressive pagodas and shikharas (typical South Asian towering religious structures) were built, encircling a central, spacious square. In the front of the aptly named Palace of 55 Windows, an octagonal multi-story pavilion was easily overlooked by tourists for its relatively modest size in comparison with other structures nearby. But it is Chyasilin Mandap, a symbol of hope for the reconstruction of Nepal’s ancient heritage for the pavilion itself once collapsed following the 1934 earthquake which also destroyed many buildings around Durbar Square, hence the spacious square we see today.

The same earthquake also shook nearby Taumadhi Square, famous for its crown jewel which is also the tallest pagoda in Nepal: Nyatapola. Completed only within five months in the early 18th century, the temple’s ingenious design allowed it to withstand the destructive power of both the 1934 and 2015 earthquakes, sustaining only minor damages. The reason for building such a tall pagoda, however, was to tame the violent nature of Bhairab, a deity whose temple today stands right to the southeast of Nyatapola.

Despite the fuel crisis which led to electricity crisis, among other things, and having to live among the scars of last year’s earthquake – wooden beams propped up against leaning walls, bricks of fallen structures piled by the side of the road, missing temple struts, etc – the people of Bhaktapur continued their lives notwithstanding the difficult situation. Every morning vegetable seller occupied both sides of the road leading to Taumadhi Square; men and women made pots from clay and dried them in the sun at Pottery Square; local cooks and chefs kept making Juju Dhau (a richer, creamier version of yogurt) and serving some of the most delicious dishes we had ever tried in the country. Resilience was evident. 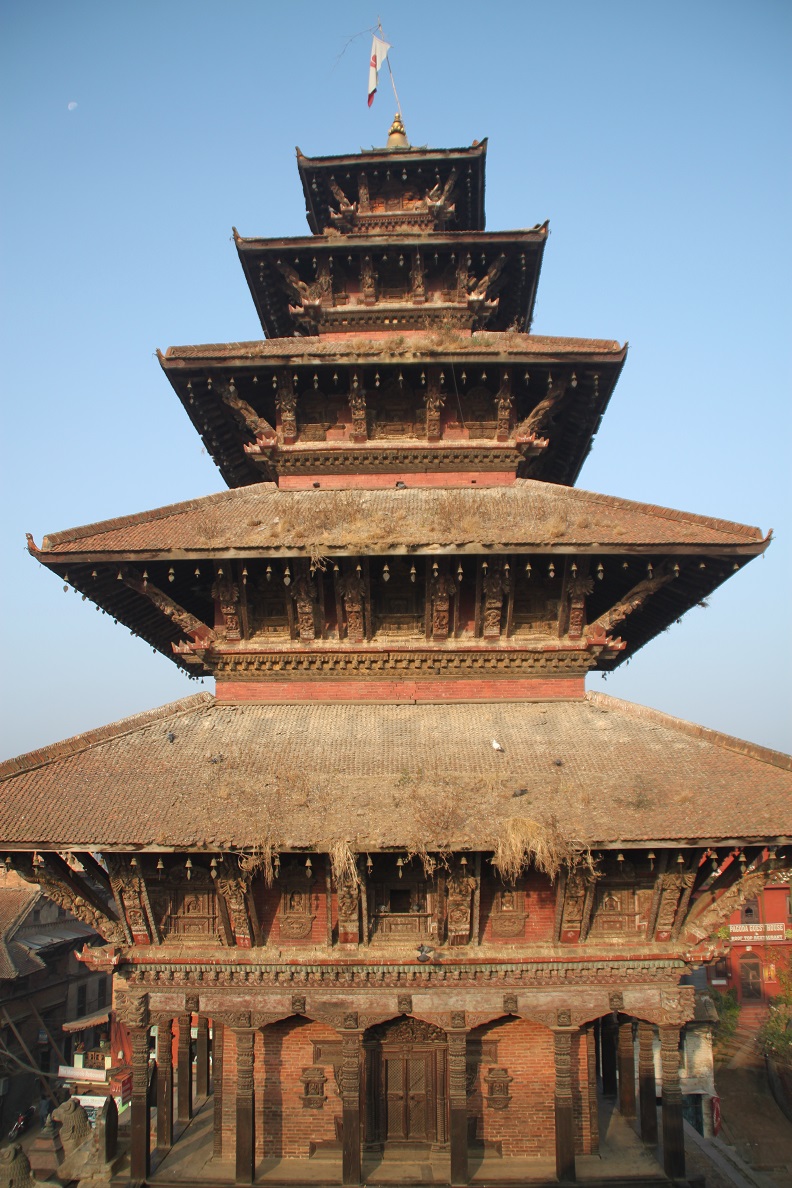 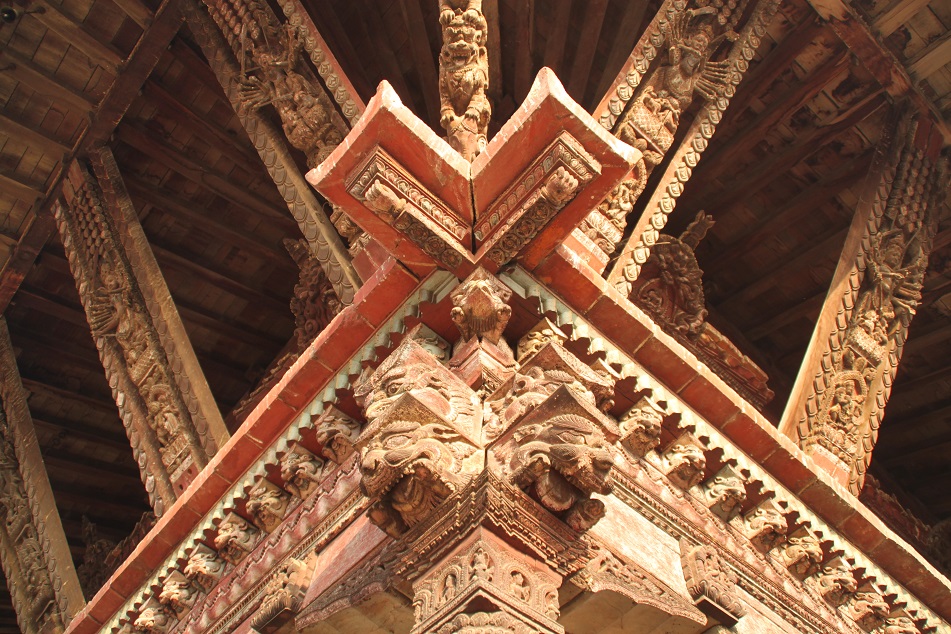 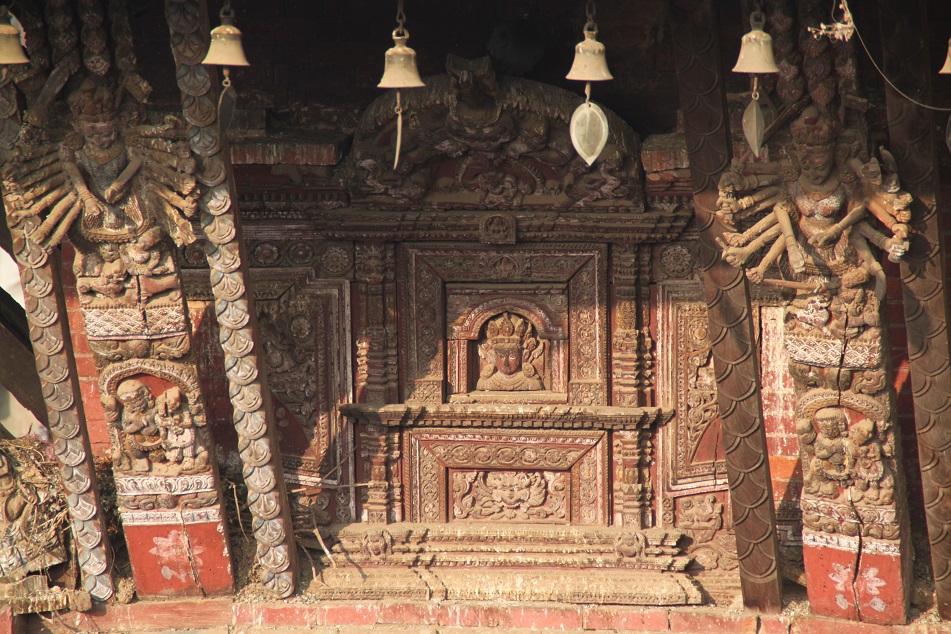 Wooden Beams against Leaning Structures, A Common Sight after the 2015 Earthquakes 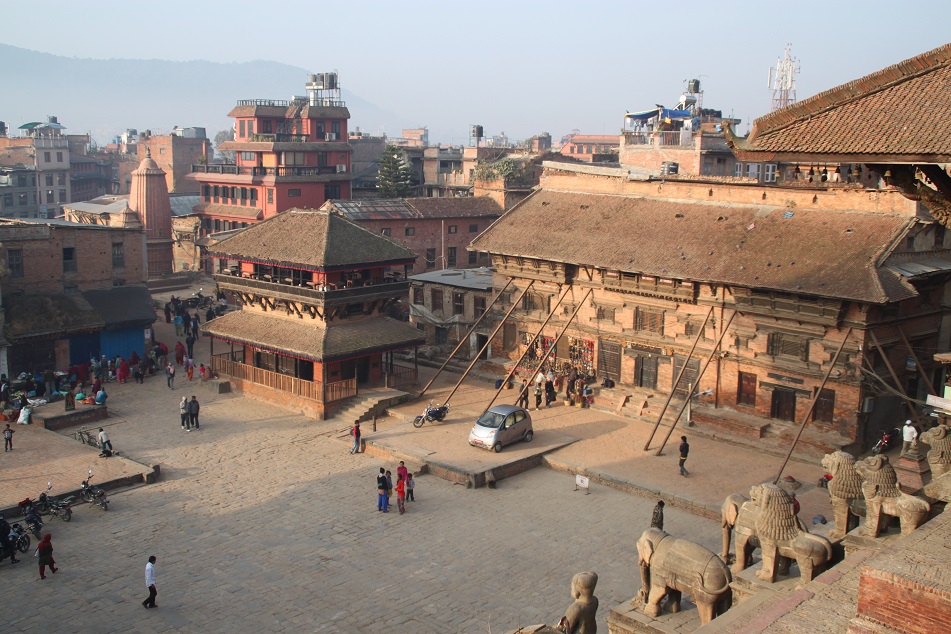 Bhairab Temple, Its Current Structure Dates Back to the 18th Century

Drying in the Sun

58 thoughts on “Bhaktapur the Resilient”