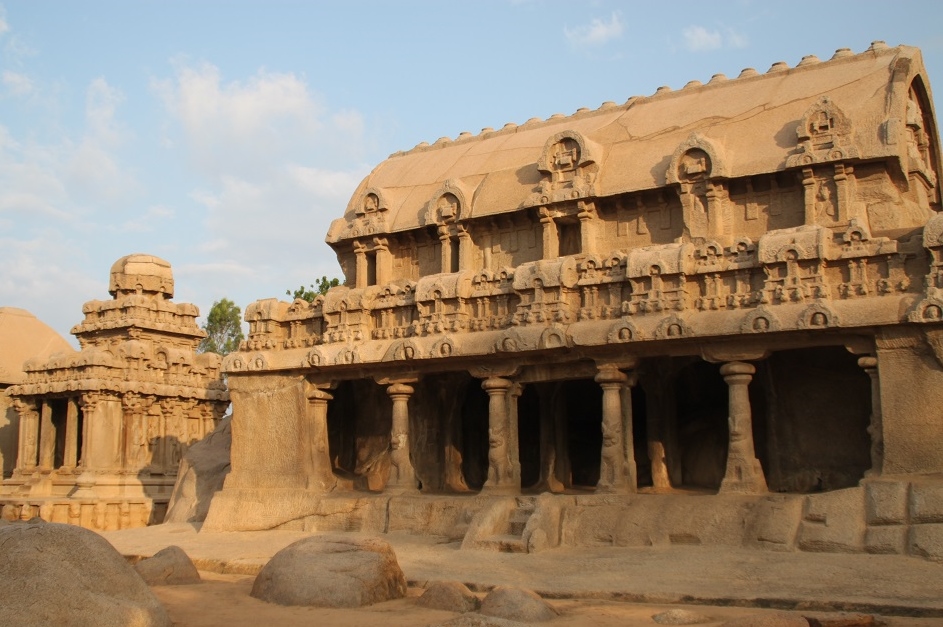 In the time when the Buddhist Mauryan Dynasty dominated much of South Asia, the southern part of India experienced a period of time when Tamil literature and art flourished, known as the Sangam period. At the time, the main powers of the region – the Cheras, Pandyas, and Cholas – were fighting for supremacy, waging wars among themselves as well as pursuing artistic achievements. However they remained largely peaceful to their northern superpower neighbor, sparing them from the same fate that brought the state of Kalinga to its demise.

This golden age of Tamil culture gradually ended following the fall of the three kingdoms due to the attacks from the Kalabhras in the third century AD. The conquerors’ rule lasted until the sixth century, but little is known about them, although a remark from a book published by the Archaeological Survey of India (ASI) states that Kalabhra’s rule was rather ‘chaotic’. However during this less-celebrated period in Indian history a South Indian family emerged around the third to fourth centuries who, generations later, would overthrow the Kalabhras and establish a powerful dynasty: the Pallavas.

Initially they were feudatories of the Satavahanas in the Deccan region. But as the Satavahanas gradually lost their power, the Pallavas rose to prominence and together with the Pandyans they eventually defeated the Kalabhras in the mid-sixth century. The first Pallavan king, Simhavarma II, ascended the throne and started a dynasty that would last for more than three centuries.

History kept repeating itself. Like the enmities among the Cheras, Pandyas, and Cholas hundreds of years earlier, the Pallavas and their contemporaries – the (resurgent) Pandyas and Chalukyas – not only fought against each other for regional supremacy, but also engaged in perennial attempts to outdo each other in artistic accomplishments, notably in architecture.

King Mahendravarman I initiated the rock-cutting method to build temples, avoiding the same mistake early Tamil kings did by constructing shrines with materials that would not endure, like timber and metal. During his reign a multitude of rock-cut cave temples (also called mandapas) were built throughout Mahabalipuram. His son, Narasimhavarman I, continued this tradition as well as developed another method of temple building.

Free-standing monoliths were constructed in the seventh century, each was meticulously and laboriously carved from a single rock. The most famous group of such structure, as well as the earliest of its kind in India, is Pancha Rathas, ‘Five Chariots’, which are associated with the Pandavas of the Indian epic Mahabharata. Draupadi Ratha, after the wife of the Pandavas, which contains the image of Durga, is arguably the most elegant of all. In front of it stands a lion statue, Durga’s mount. Next to it is Arjuna Ratha, after the third of the Pandavas, adorned with sculptures of Shiva, Indra and Vishnu with their respective mounts. Behind it a giant Nandi statue was left unfinished.

Unfinished is in fact the state of construction of the other rathas. Bhima Ratha, with its elongated rectangular shape, was believed to be built to contain a statue of reclining Vishnu. Dharmaraja (Yudhistira) Ratha, the biggest of the group, has similar architectural style with Arjuna Ratha but with an unfinished lower part. Nakula Sahadeva Ratha, after the twins and youngest of the Pandavas, sits next to an elephant monolith. They were all never consecrated, hence the name ratha instead of temple.

Another artistic achievement during Narasimhavarman’s rule was the Arjuna’s Penance, depicting scenes from the story of the descent of Ganga (the Ganges) from heaven to earth. Dubbed as the world’s largest open-air bas relief, it is a fine example of creativity born from human adaptation to nature. Images of Naga and Nagi serpents were carved on the natural cleft between the two panels of the rock, symbolizing river-dwelling creatures. 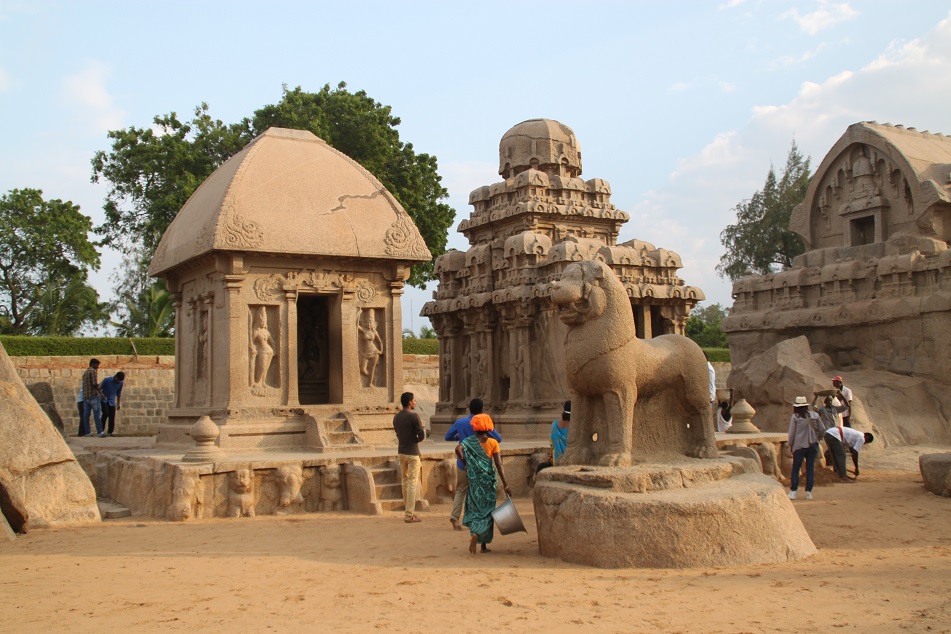 Draupadi Ratha (left) and A Lion 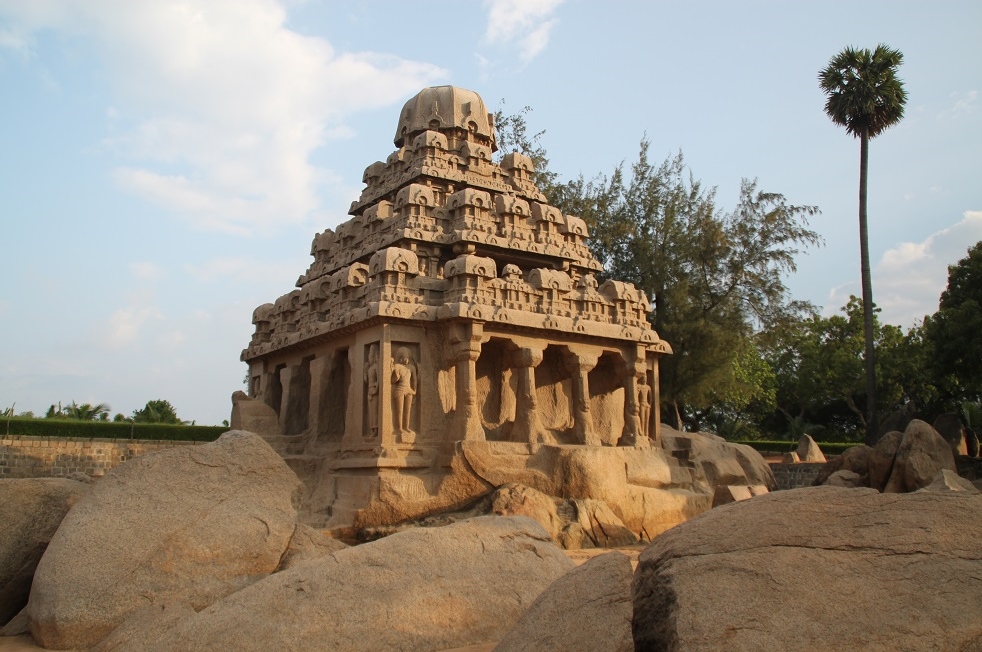 Dharmaraja (Yudhistira) Ratha, the Biggest of the Five Rathas 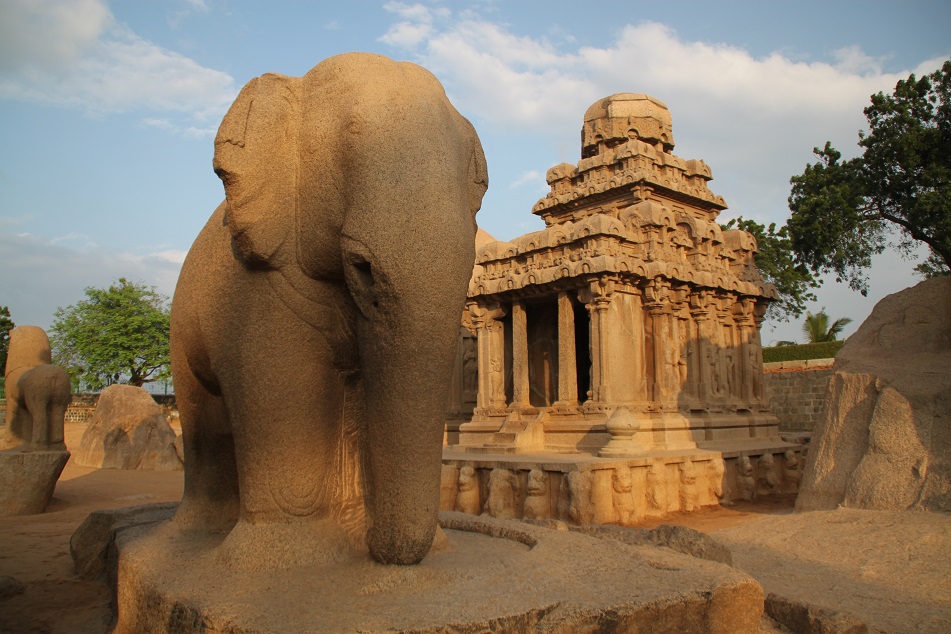 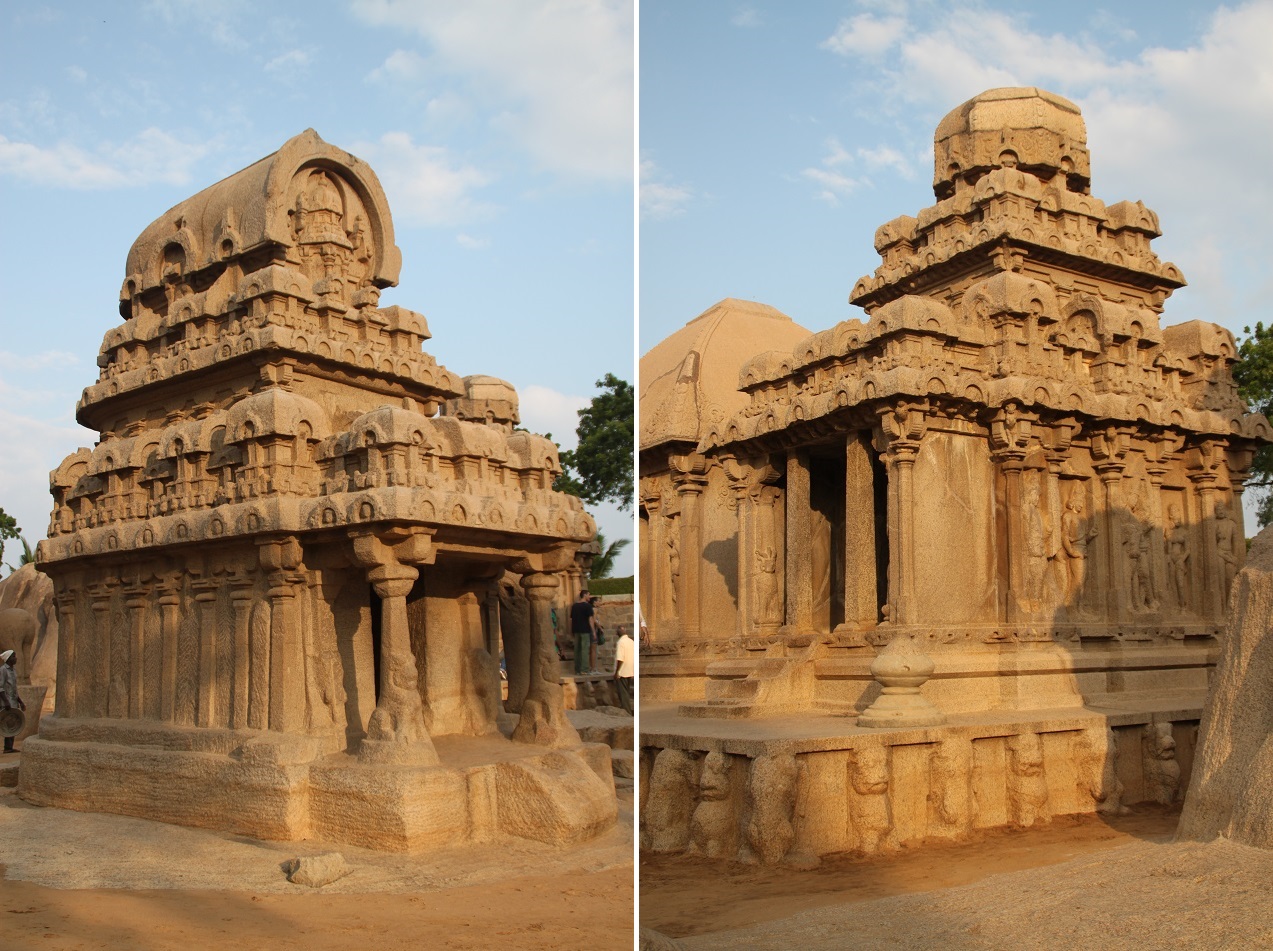 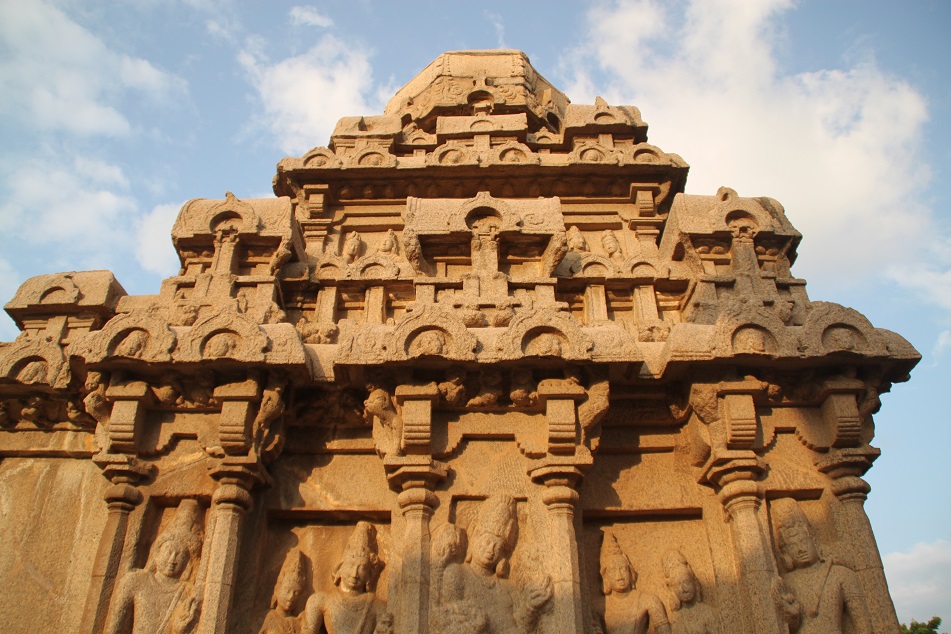 A Closer Look at Arjuna Ratha 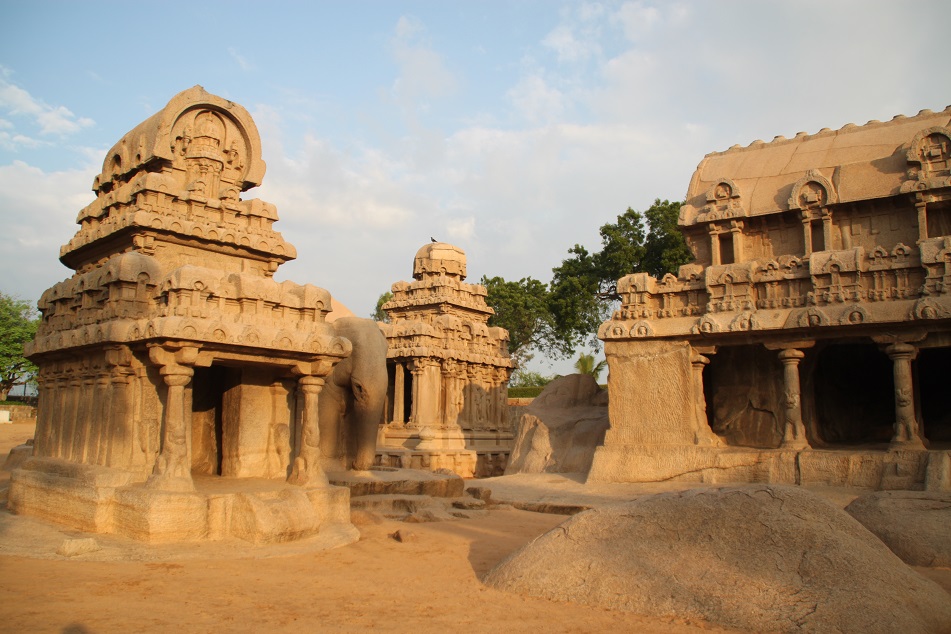 Each Ratha was Carved Out of A Granite Monolith 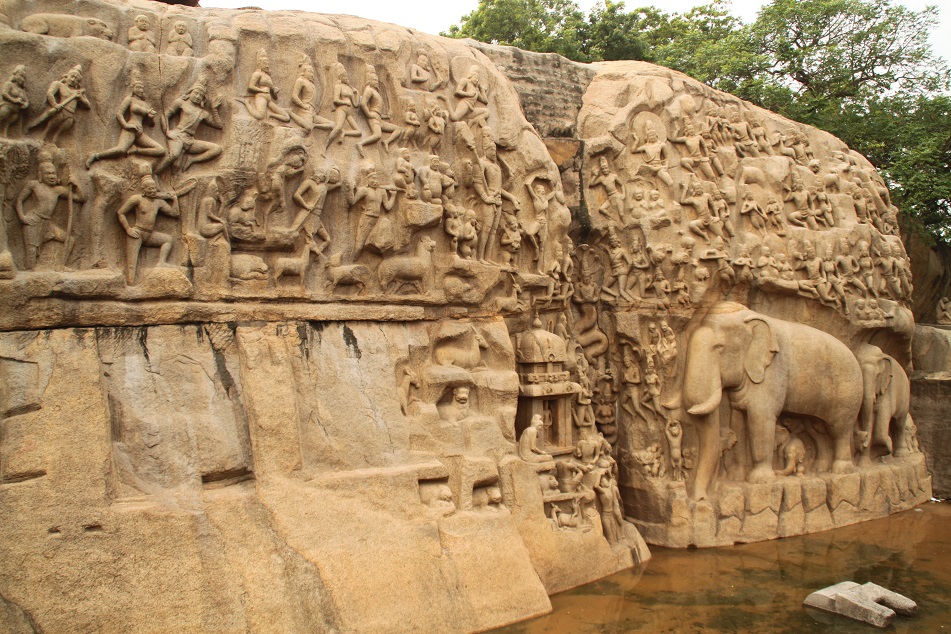 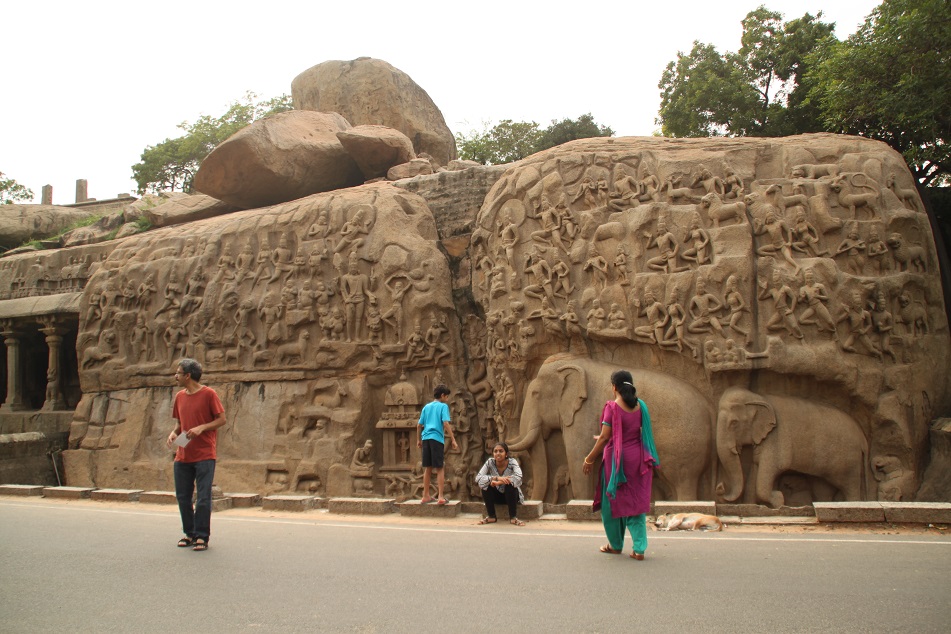 21st-Century Visitors in front of A Seventh-Century Masterpiece 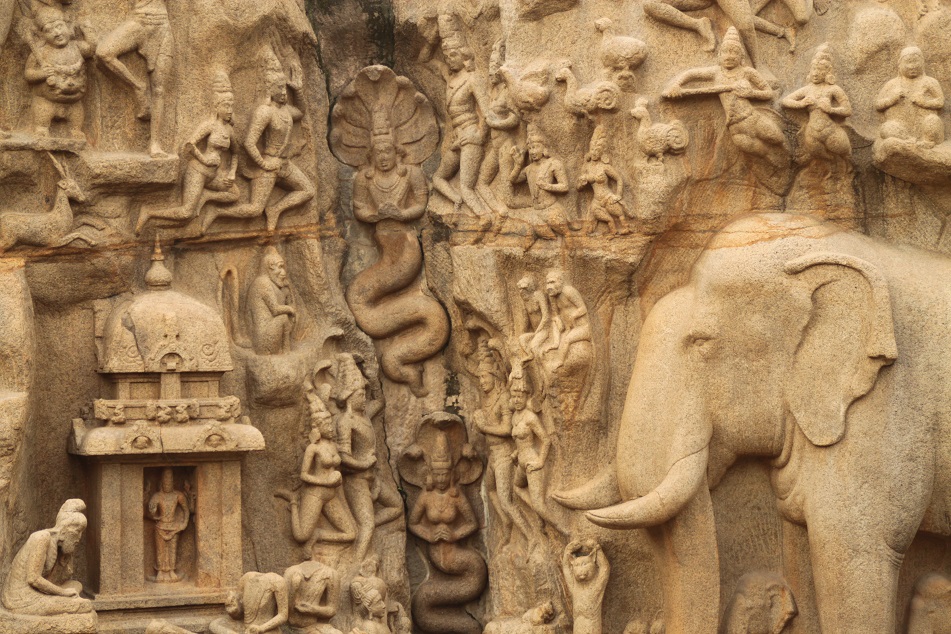 Naga and Nagi in the Ganges 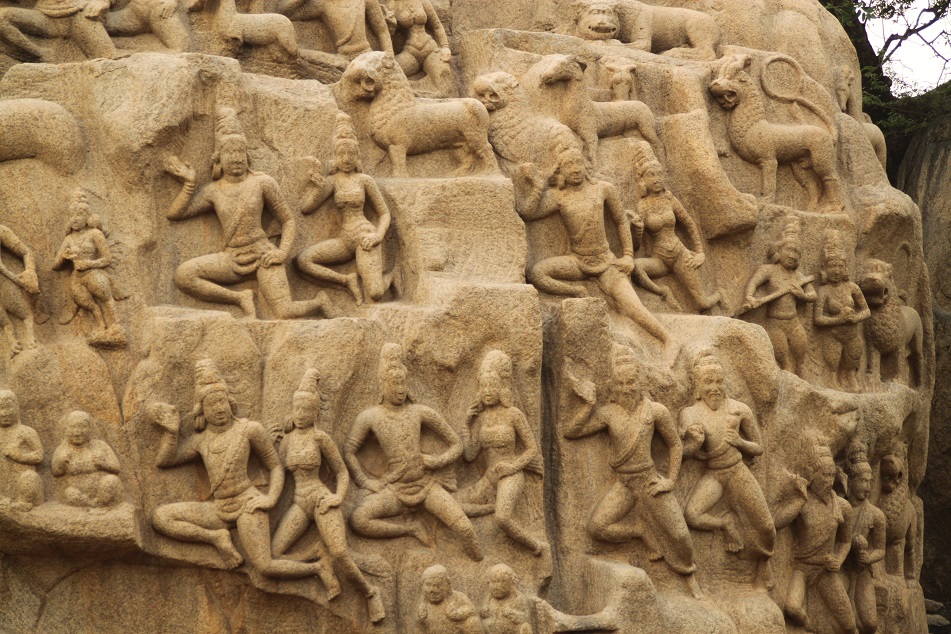 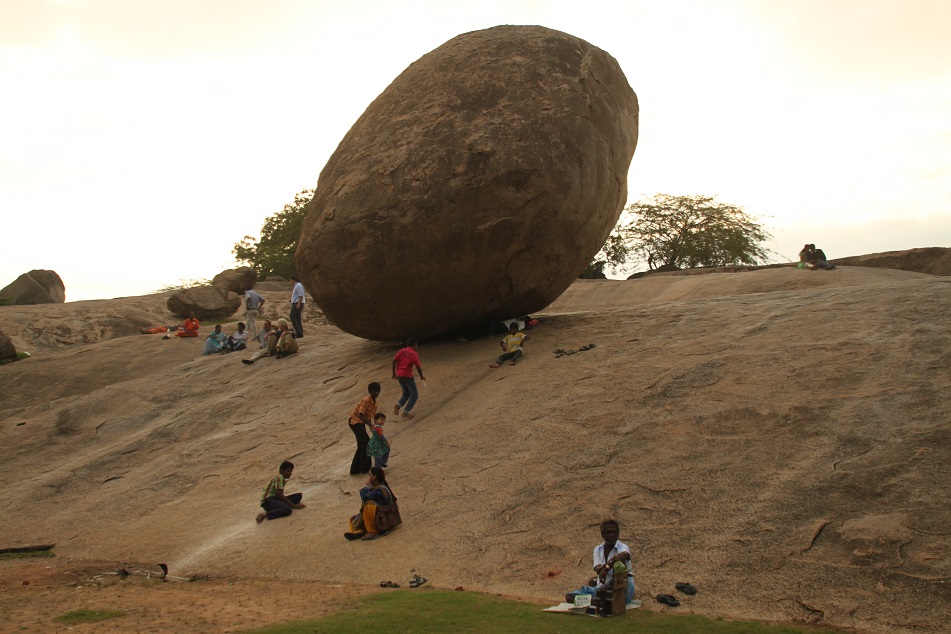 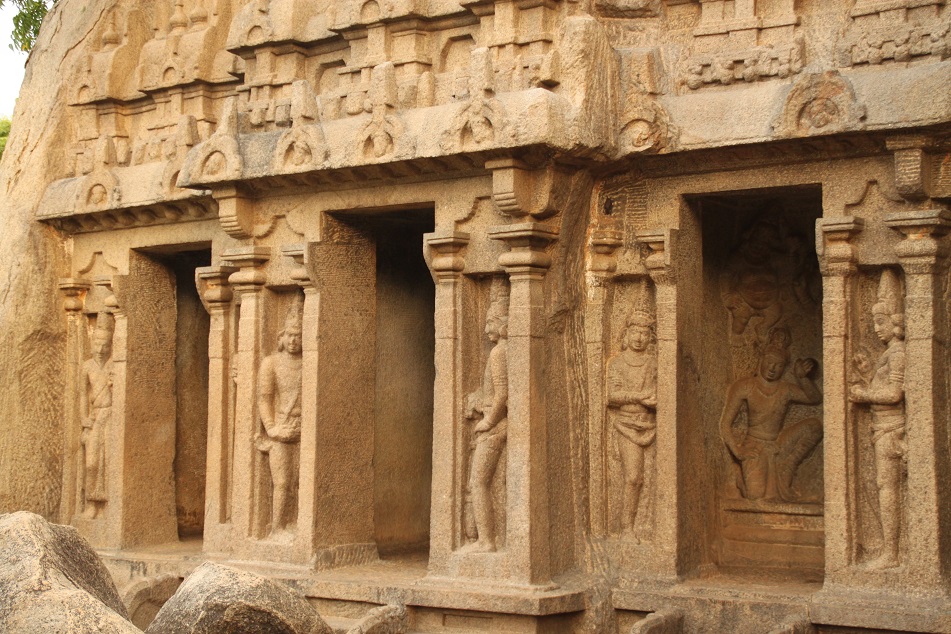 Narasimhavarman’s death and a period of relative instability due to the threat posed by the Chalukyas put the construction of the rathas to a halt. Only more than three decades later during the reign of King Narasimhavarman II did the constructions resume. However the new king, understanding that cutting rock to build temples is a time-consuming process, introduced a new and faster method.

He began the golden age of South Indian masonry marked by the construction of so-called structural temples, including the ones scattered along the Coromandel coast. European explorers gave the nickname ‘Seven Pagodas’ to the temples they saw from their ships, a convenient way to describe the landmark to subsequent sailors. Today the Shore Temple, however, is the sole survivor for the rest of the ‘pagodas’ had succumbed to the forces of nature a long time ago. It was not until 2004 when the Indian Ocean tsunami hit this part of the world that the foundations of the long lost temples were sighted again after centuries of obscurity.

Nevertheless the sole survivor’s condition is by no means immaculate as exposure to the sea wind for more than a millennium has been damaging its sculptures and reliefs. Madhu, who took us to Mahabalipuram, wondered if the Shore Temple would last another century. Preservation efforts have been taken, however, to protect the UNESCO World Heritage Site from further damage.

Temple-building aside, the Pallavas, as well as other South Indian peoples, were known for their seafaring activities. One of the regions they reached was the islands what today constitute the western part of Indonesia, although it is still unknown when and where they arrived for the first time. The evidence of these early contacts became clear when a yupa (stone with inscriptions) found in East Kalimantan (one of the five provinces on the Indonesian side of Borneo) and written in Pallava script revealed the existence of a fourth-century Hindu kingdom in the region. Kutai, also called Kutai Martadipura, is to date one the oldest kingdoms in Indonesian history.

Not only in Indonesia, the influence of the Pallavas was also palpable in many parts of Southeast Asia. The Javanese, Balinese, Kawi, Burmese, Khmer, Thai, Lao and some other scripts used in the region are believed to be, whether directly or indirectly, derived from the Pallava script. Some scholars also believe that the architectural style of early Hindu temples in Java was influenced by that of the Pallava’s, chiefly the structural temples. The increasing cultural exchanges between Javanese kings and the Pallavas would soon mark the beginning of a chapter in history known as the Javanese classical period. 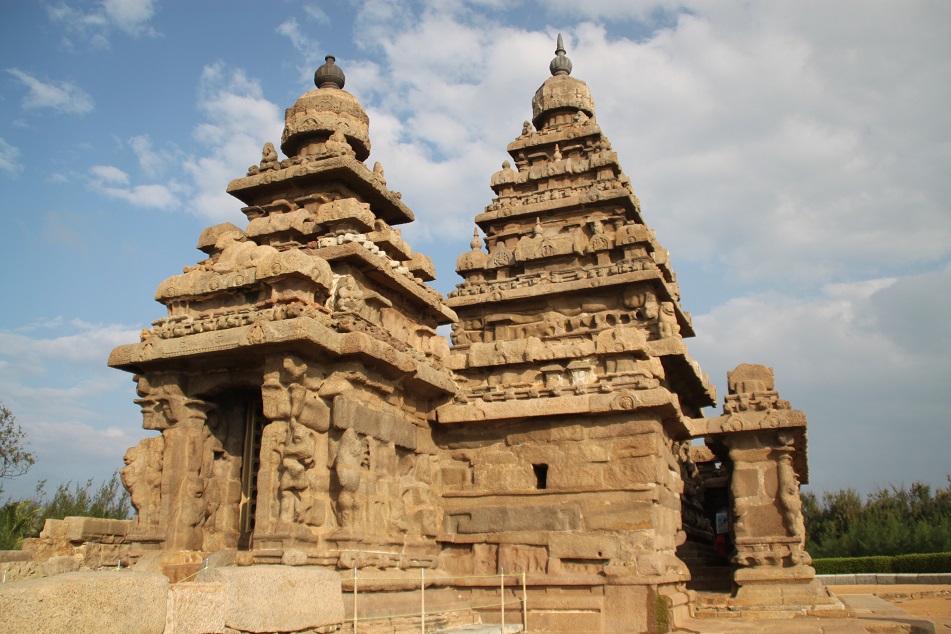 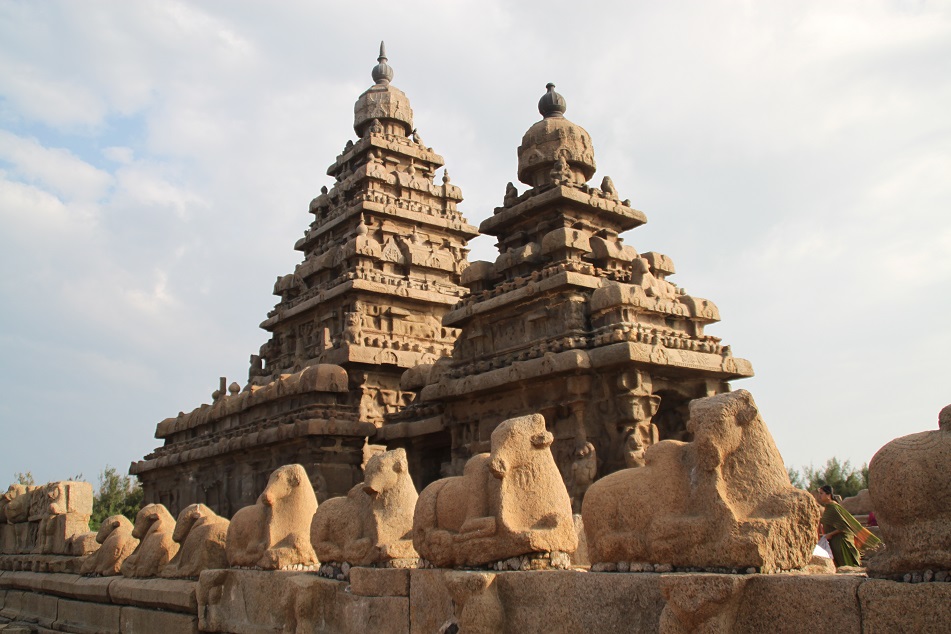 Statues of Nandi, the Mount of Shiva 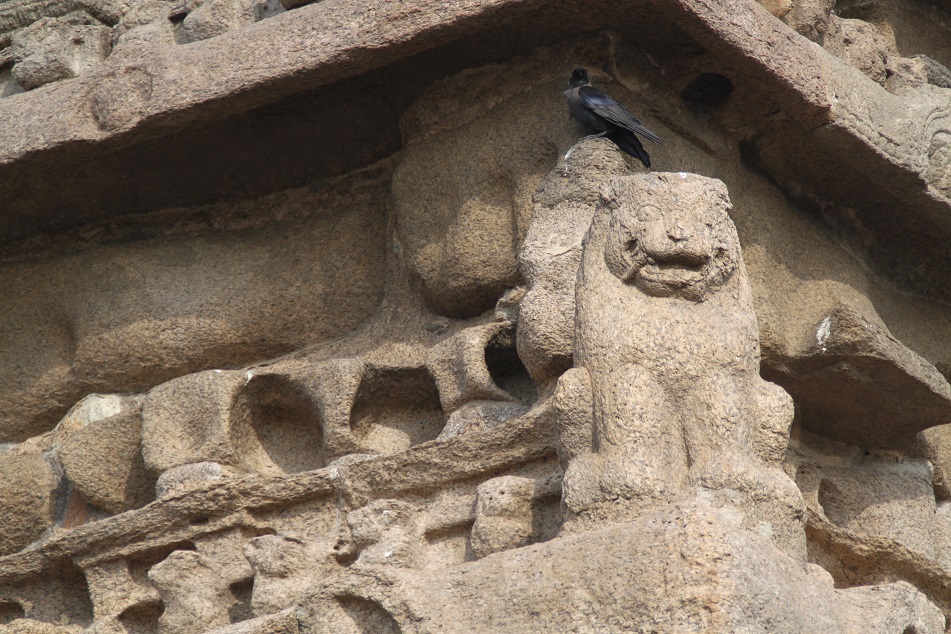 A Bird atop A Weathered Carving 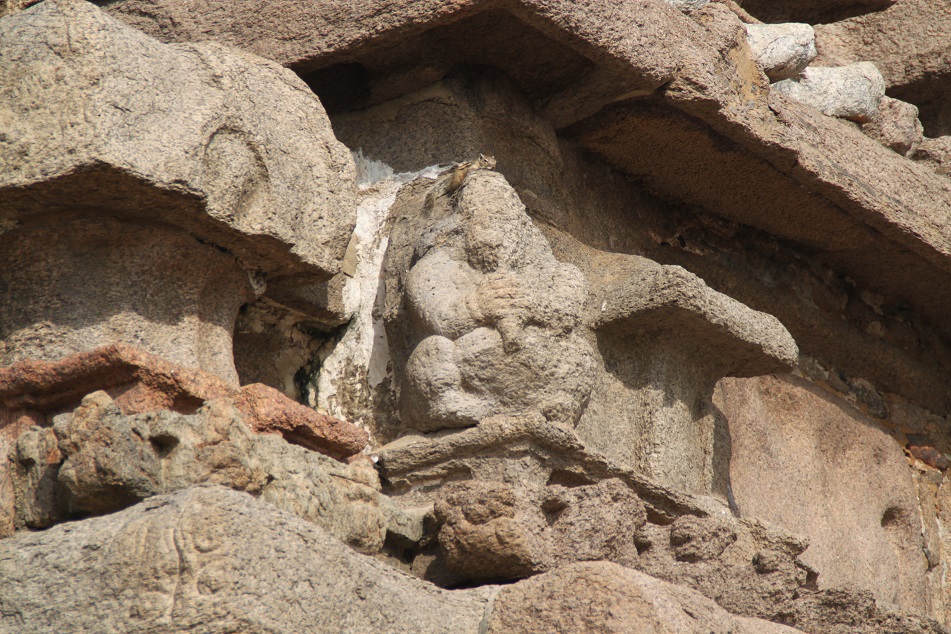 A Squirrel Observing from Above 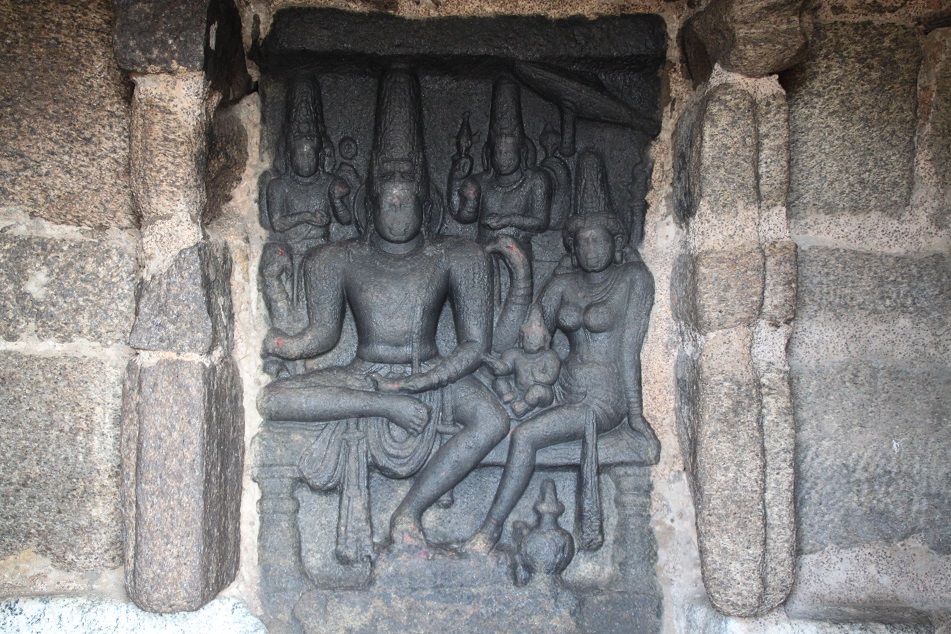 Shiva, Uma (His Wife) and Skanda (Their Son) 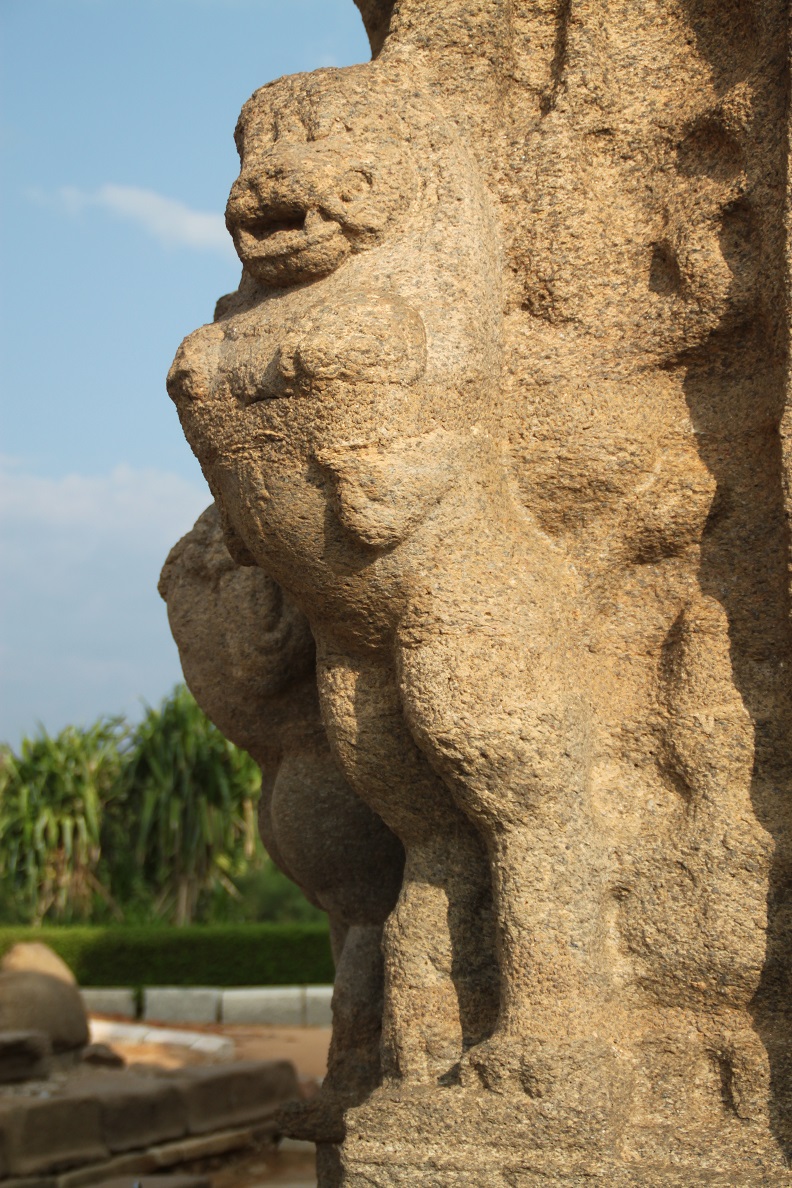 A Rajasimha Pillar, Battered by the Elements 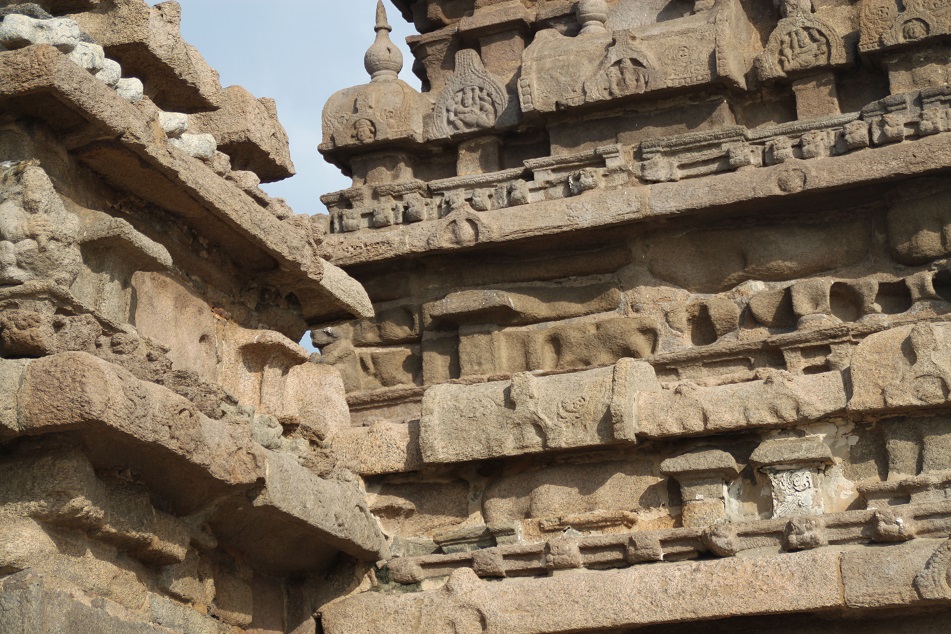 Some Carvings Had Been Eroded beyond Recognition 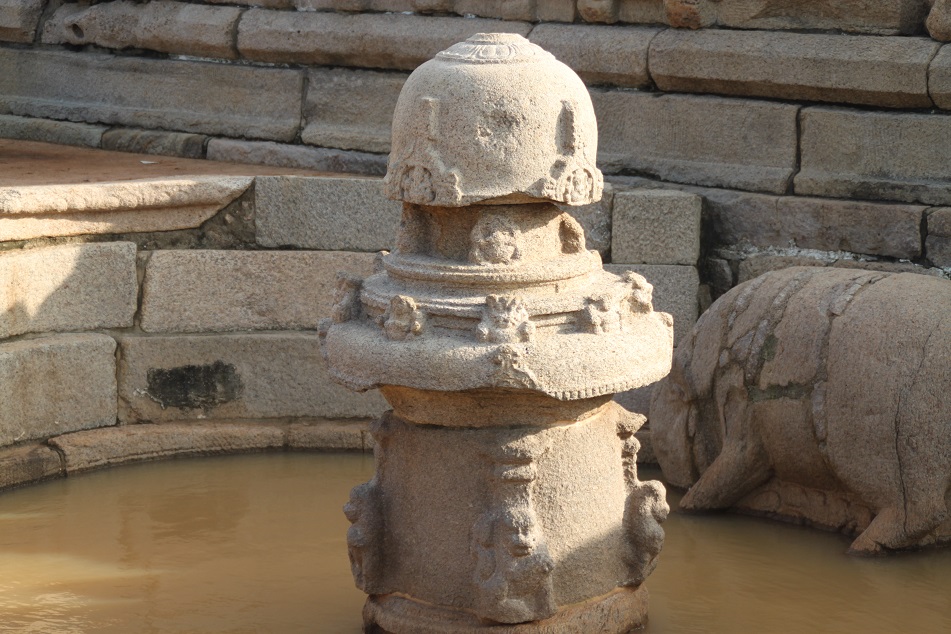 A Miniature Shrine, Discovered in 1990 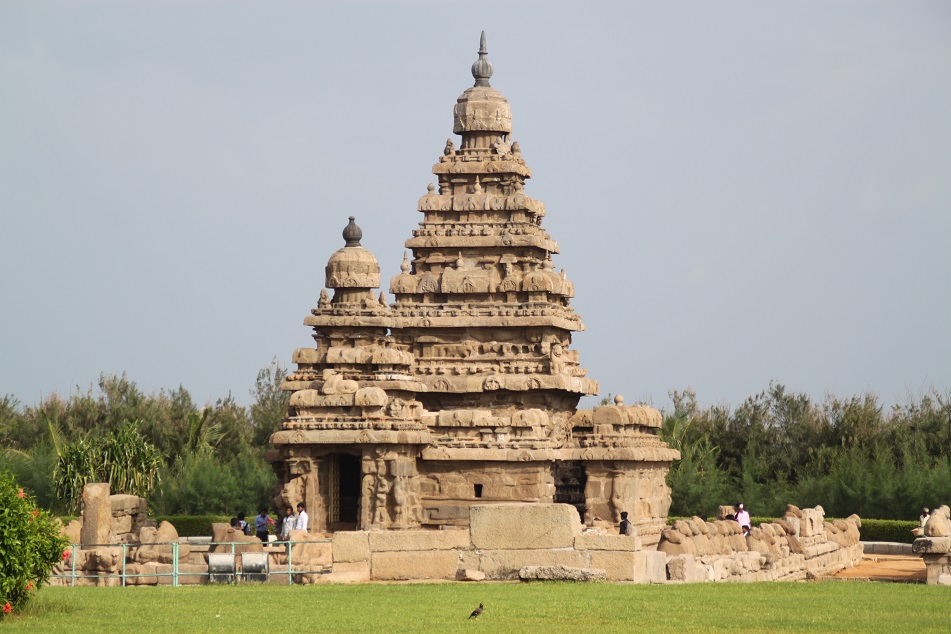 Sole Survivor of the Fabled Seven Pagodas of Mahabalipuram

50 thoughts on “Mahabalipuram: Rise of the Pallavas”