The moon. For millennia it has been a perennial source of fascination for humans from almost every culture in the world. The celestial object – often perceived as a gentle balance to the mighty sun – plays an important role in many mythologies: from the Norse god Máni in the cold far north to the Egyptian god Khonsu revered by the dessert-dwelling ancient society.

Alongside with Chandra – the god of moon in Hindu mythology – who travels the night sky on his chariot to pull the moon, Ratih – the pre-Hindu goddess of moon and beauty – is also venerated by Javanese and Balinese. As Hinduism flourished in Java between the 4th – 15th century AD and still is the predominant religion in Bali, many pre-Hindu deities were absorbed into Hindu mythology, so was Ratih.

Similar with the story of Chandra, it is said that Ratih travels every night on her chariot to pull the moon from east to west. One night when she was flying over the village of Pejeng one of the wheels of her chariot fell from the sky – other versions say it was either Ratih’s ear decoration or one of the ancient moons – and landed on a tree. The mysterious object was then called Bulan Pejeng – Moon of Pejeng, treated by the locals as a sacred relic.

The small village of Pejeng had been constantly illuminated since then, by the sun during daylight and by Bulan Pejeng when night fell. Agitated by that situation, a group of thieves – who were unable to do their action at night due to the light – plotted to estinguish Bulan Pejeng’s luminosity. A rather simple idea was formulated to urinate on the magical object to deprive it from its sacredness.

They chose the bravest among them to execute the plan, the man then climbed the tree where Bulan Pejeng was stuck. Moments after he urinated on it the object began to dim, until eventually it lost its light entirely. Unaware of the consequence of his action, the thief subsequently lost his life for the magical power of Bulan Pejeng claimed it as it gradually dimmed.

Women Working on A Wantilan

Ornate Decoration of A Pavilion

A Gilded Crest atop An Ijuk Roof

On a less romantic account, there have been debates in scientific and historian communities on the origin of Bulan Pejeng. Some argue that the world’s largest single-cast bronze kettle drum was made by the nothern Vietnamese people of Đông Sơn around 300 BC – known for their bronze casting skill in creating drums which were widely spread across Southeast Asia. However further studies revealed that Bulan Pejeng has different characteristics from other kettle drums made by the Đông Sơn – collectively called Heger-type kettle drum, after Franz Heger, an Austrian anthropologist who conducted extensive studies on Southeast Asian kettle drums. He suggested that Pejeng-type kettle drums might evolve from those of Heger through time.

There is no clear evidence on what Bulan Pejeng was made for, nevertheless some suggested it might be used in ancient rainmaking rituals. Today the giant kettle drum is stored at a pelinggih – an elevated roofed pavilion – at Pura Penataran Sasih in Gianyar Regency, Bali.

Moon has inspired humans to create imaginative stories about life, love and anything else between the earth and sky. However roughly 3 km south of Pura Penataran Sasih a rock inspired another ancient Balinese society to create more realistic narratives about life, in the form of rock carvings.

The 14th century reliefs of Yeh Pulu were carved on a 2m-tall and 25m-high rock, depicting scenes of ancient Balinese daily lives: a man carrying an urn; a long-haired man riding a horse; two men hunting animals with traditional weapons; a fight between a frog and a snake; two men carrying pigs on a pole, slung over their shoulders; and a woman holding the tail of a horse.

Named after a stone container from which water flows out – yeh means water, while pulu means container – Yeh Pulu ancient reliefs lie at the edge of a rice paddy, irrigated by Balinese distinctive Subak system. No one knows for certain why the reliefs were made, leaving our imagination and further research amuse and bewilder us at the same time.

Of all daily life depictions at Yeh Pulu, the moon is absent, probably because the chariot that used to pull it lost one of its wheels. 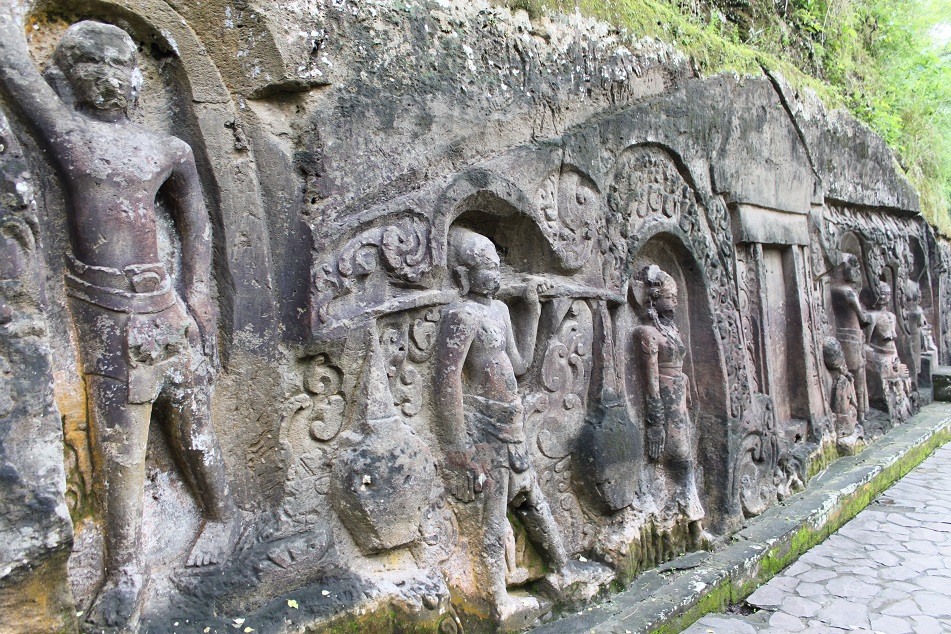 A Man Riding A Horse 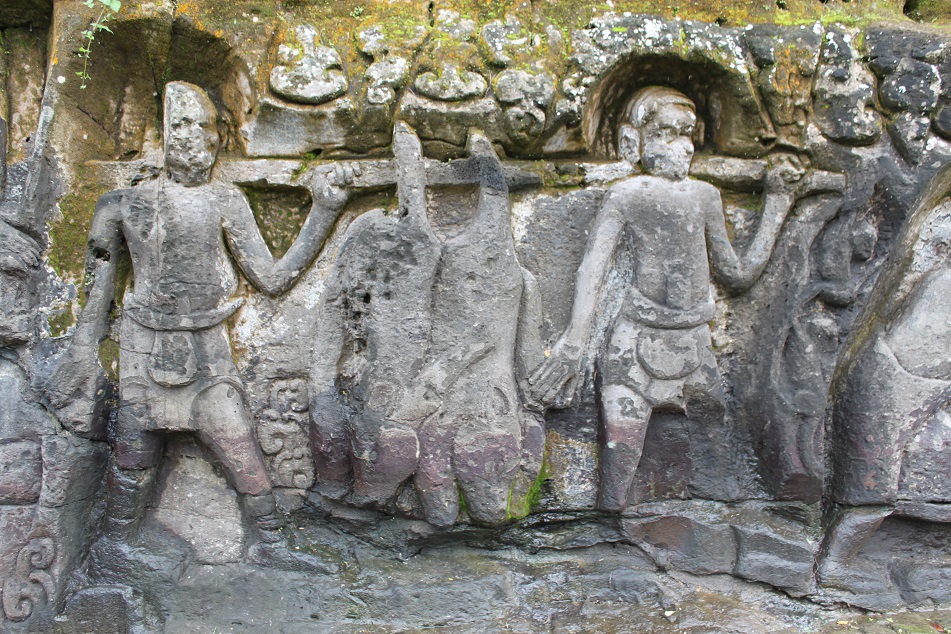 A Cascade at Yeh Pulu

36 thoughts on “The Moon and The Rock”