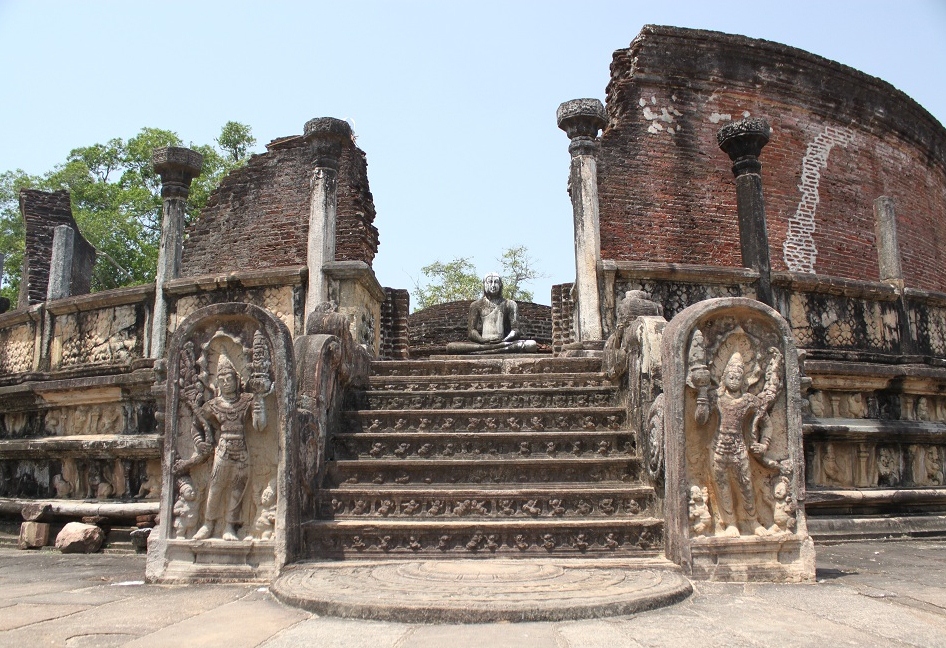 Almost like reacting to the sound of an alarm, I wake up just at the right time when we arrive at another Sri Lankan ancient town, Polonnaruwa. The sound of rushing water in a canal where local men and women bathe to escape the scorching heat welcomes me to this region in the island’s northern-central part – infamous for its year-long hot climate. All canals have the same headwaters, an impressively large artificial lake, which together form a sophisticated water supply system from which the people of the ancient kingdom of Polonnaruwa get fresh water to sustain their lives.

The kingdom of Polonnaruwa was Sri Lanka’s second most ancient kingdom, after Anuradhapura. However, it managed to establish itself as a highly independent and respectable kingdom for most of its time – the artificial lake is undoubtedly a silent witness of its old glory. In the early 11th century, King Vijayabahu I reunited the country and declared Polonnaruwa the capital of the unified kingdom which lasted until the late 13th century when the island was once again invaded by an Indian kingdom.

At the heart of the ancient kingdom, lies what once the royal palace complex which consists of the palace itself, the council chamber, the vatadage (Sri Lankan vernacular architecture of a Buddhist shrine), and some other structures related to the daily life of the kings and his family. All of them are in the vicinity of the lake. 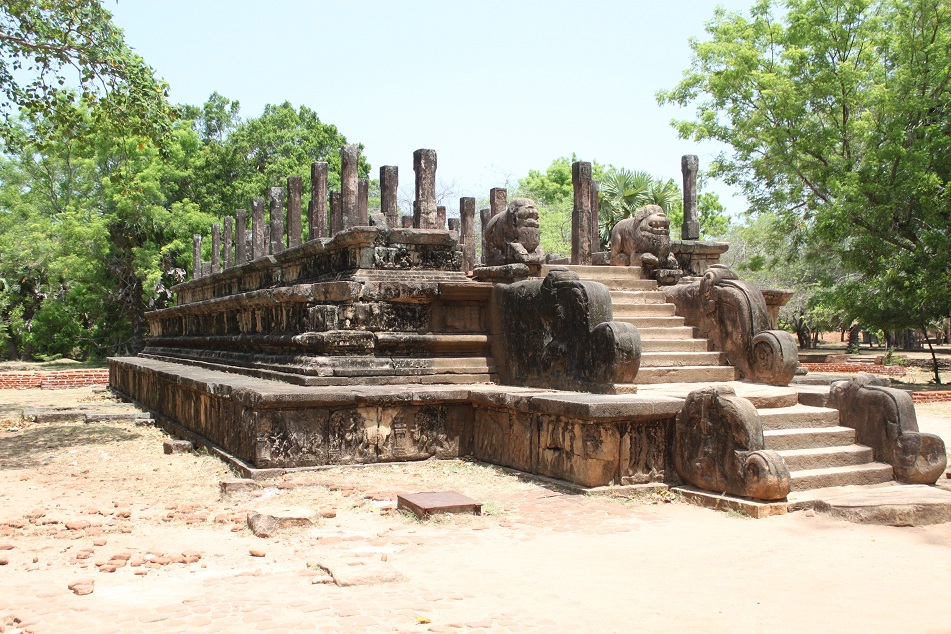 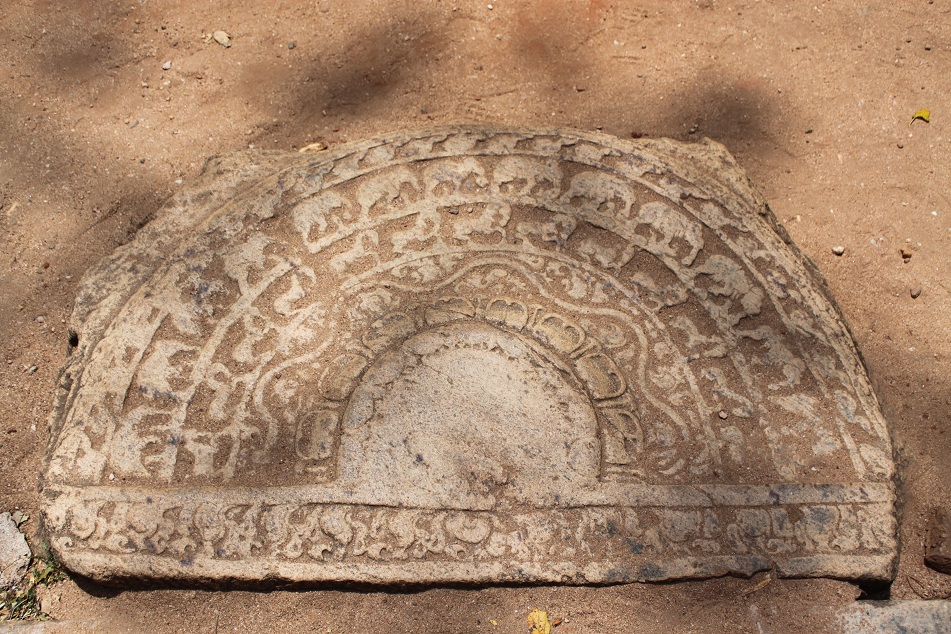 A Moonstone at the Base of the Council Chamber 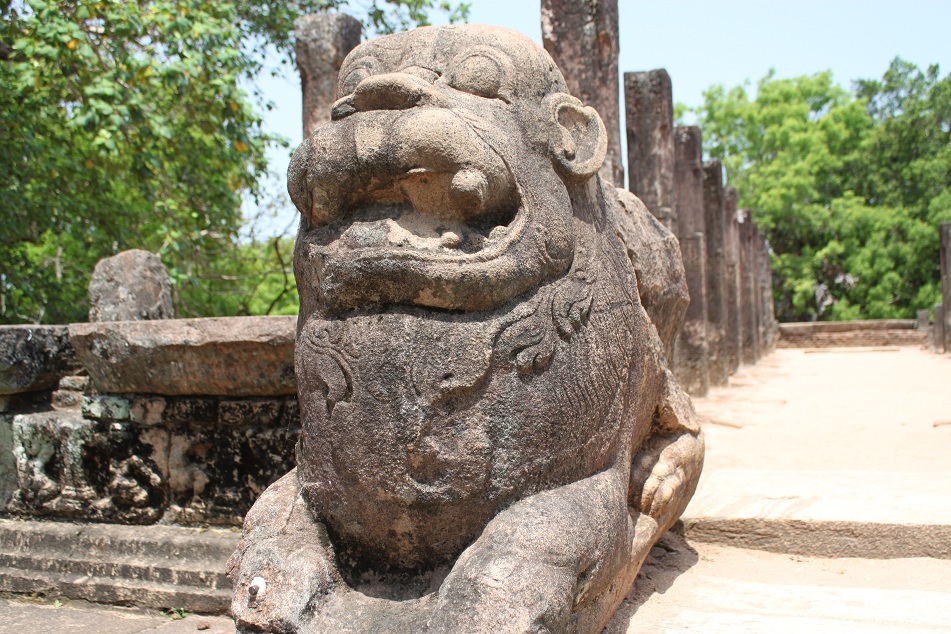 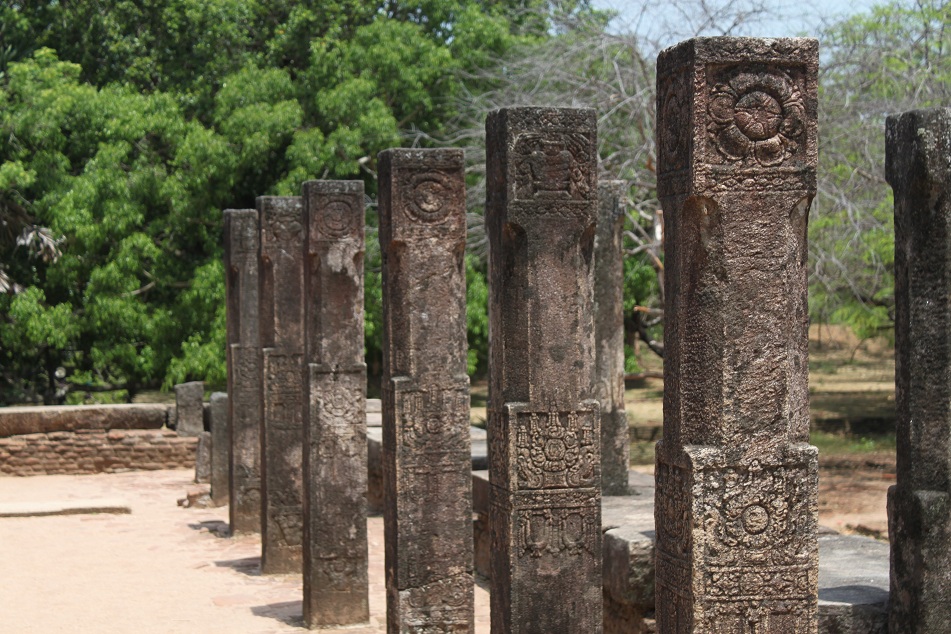 As I step out of the car, I can instantly feel the rather extreme heat under the blazing sun. Only a few other places could match such scorching heat in my entire life by far. Luckily, the majority of the most important archaeological sites in this ancient city are located within walking distance from each other. The Sacred Quadrangle which hosts the most ancient ruins is the focal point of any exploration of Polonnaruwa, as it also used to be the center of the kingdom’s religious life. Containing a number of Buddhist shrines – one of them purportedly held the tooth relic of the Buddha and the alms bowl used by him – the Quadrangle is a place where you can marvel at some of ancient Sri Lanka’s best architectural styles, from the elegantly designed vatadage to the curiously-looking writhed stone pillars at the courtyard.

Ruins of the Royal Palace

Other Ruins in the Inner City

Decorative Elements at the Entrance of the Vatadage 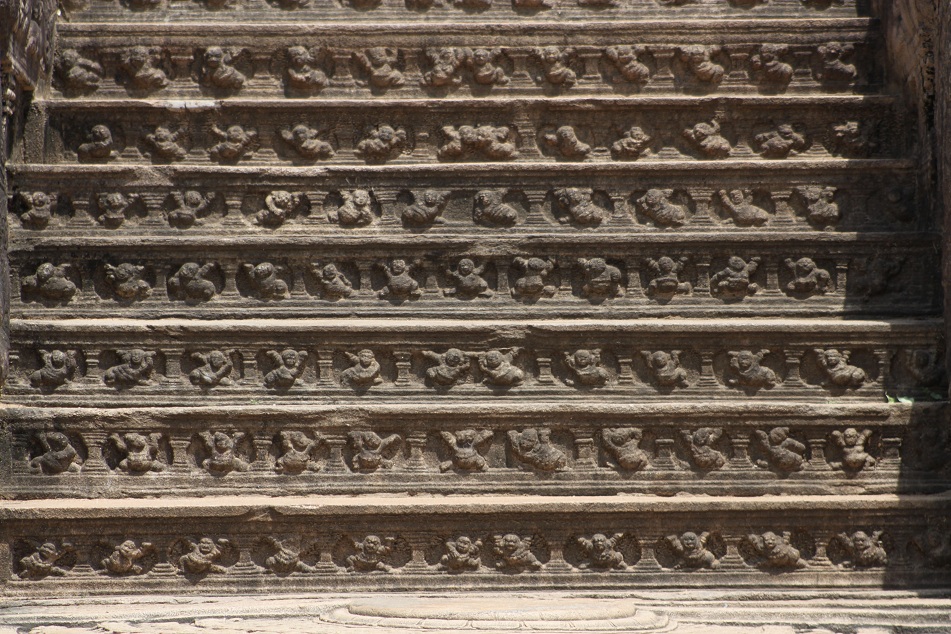 A Lonely Buddha Statue among Ruins

The Most Sacred Building in the Quadrangle

The Story of King Nissanka Malla 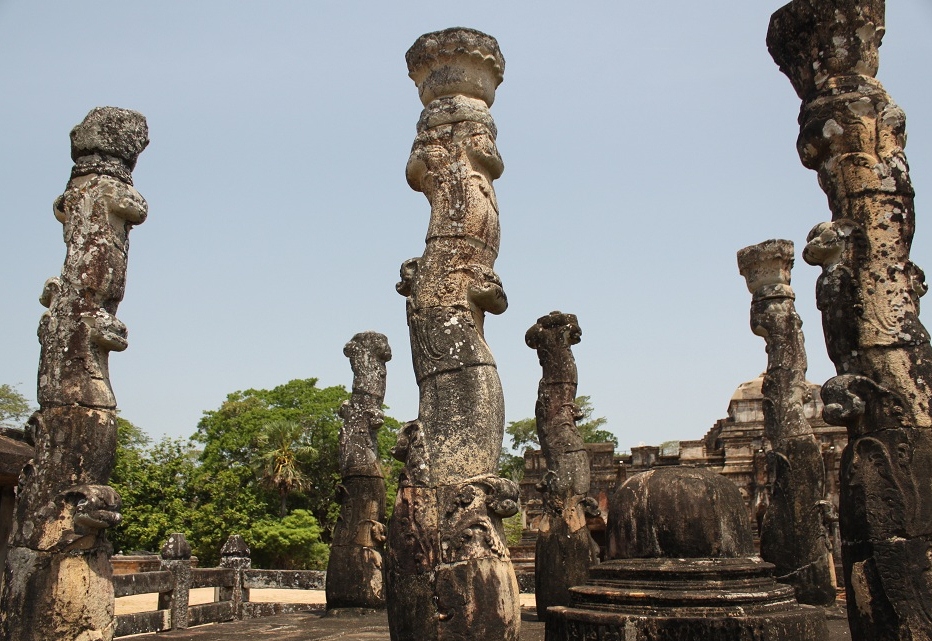 A Giant Dagoba, Similar to those in Anuradhapura

Details of A Moonstone

Not only at the Sacred Quadrangle, apparently ancient Polonnaruwa’s exceptionally creative society also materialized their unusual ideas at Gal Vihara, a few kilometers to the north of the inner city. On an elongated large granite rock, four images of the Buddha were sculptured in such a fine technique that they are often considered as one of ancient Sinhalese masterpieces. Constructed in the 12th century, the sculpted four images had endured the weather and sit as elegantly as ever, drawing visitors and pilgrims alike to this Buddhist shrine. The Buddha is depicted in two sitting positions, one reclining and, interestingly, one in standing position – a very rare depiction of the Buddha. Another evidence of ancient Polonnaruwans’ penchant for doing things differently. 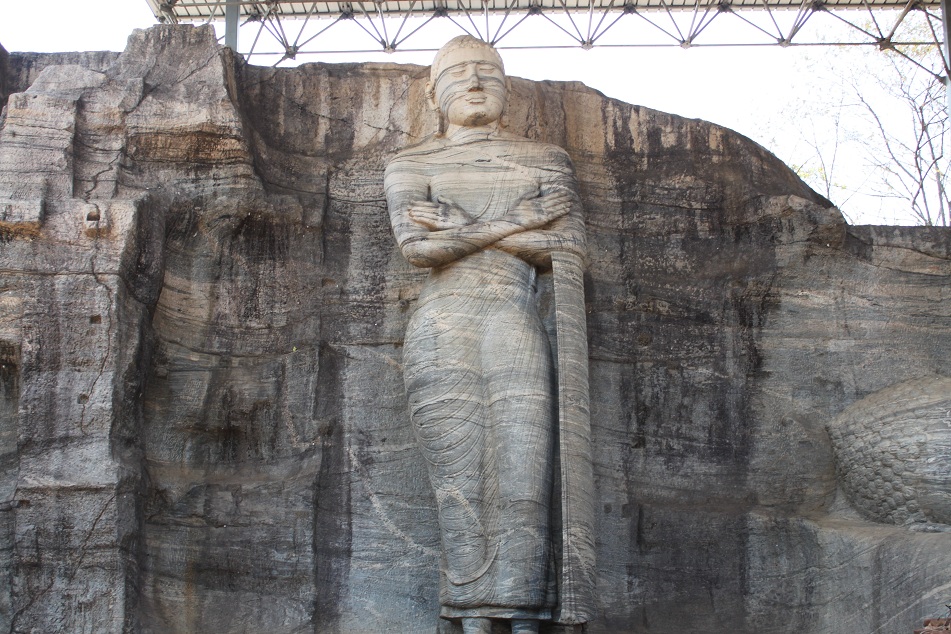 A Rare Position of the Buddha

Earlier that day on our way to Polonnaruwa, instead of taking the much smoother highway, Suresh drove his car through a long dirt road on the perimeter of Minneriya National Park, hoping to spot some wild elephants. Unfortunately all we found was their droppings – not the sight we wished to see for sure.

Going back to Kandy – my base city to explore the Sri Lanka’s Cultural Triangle – I have let go the wish for seeing any wild elephant. But I tell Suresh that spotting even only one elephant would be very nice anyway. A few minutes after leaving Polonnaruwa suddenly he shouts and grins, “An elephant! Your wish come true!”

However the sight is actually quite intense as one old man is riding his old traditional vehicle when the wild elephant crosses the highway, forcing all cars to stop and wait in worry. But it is the old man’s lucky day because at the same time a medium-sized military vehicle happens to be around, giving him protection from any unexpected charge from the elephant. Everyone is waiting patiently until the elephant moves to the other side of the road. Cautiously passing by the seemingly gentle female elephant, Suresh slows down the car in order for me to be able to snap some pictures quickly. As if two victorious smiles on our face are not enough, a few hundred meters later another wild elephant is spotted, walking peacefully on one side of the highway. Such a perfect way to end my visit to the beautiful ancient ruins of Polonnaruwa, indeed. 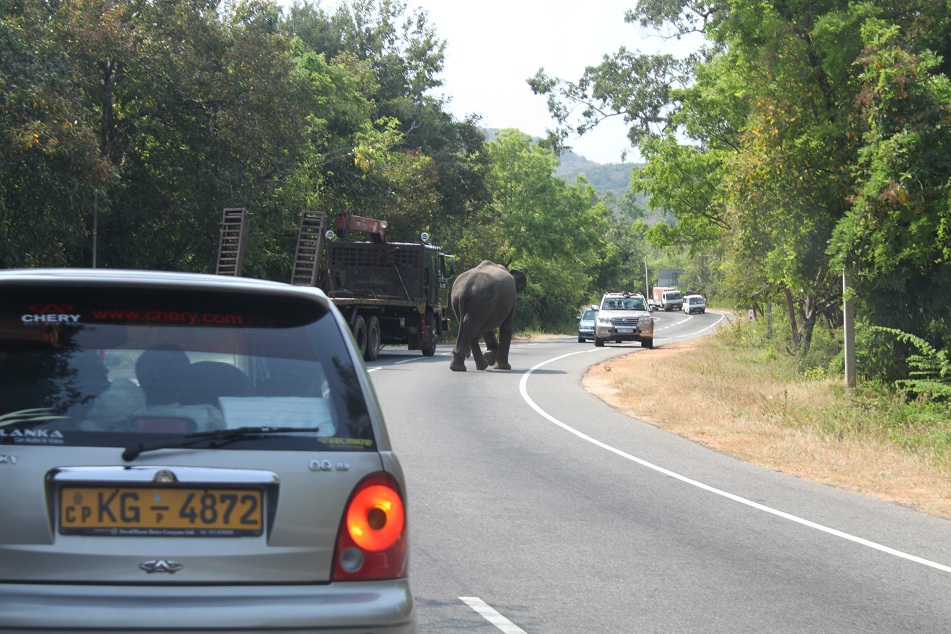 31 thoughts on “Polonnaruwa: A Timeless Elegance”